What it was like at the Raptors game 5 in Cleveland

Game five of the Conference Finals went down last night in Cleveland. Coming off two big wins in Toronto, the Raptors had everyone guessing whether it would be a third straight victory or if the Cavs would continue the home court dominance that's marked the best of seven series so far.

We joined about 50 fans from Toronto on a day trip south of the border to find the answer. We arrived at Pearson for a mid-afternoon chartered flight courtesy of Air Canada as part of their #NorthSidePride contest they've been running every series this playoffs. 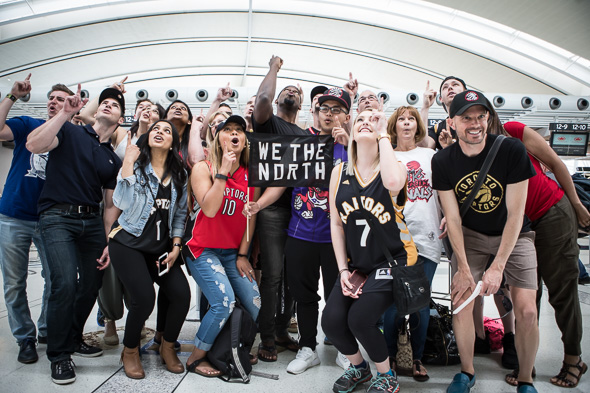 Fans entered via radio and online for a chance to win a pair of tickets to the game. One of the winners was Ashley who submitted this video via YouTube and was rewarded with two tickets to the game and VIP treatment to Cleveland and back including a quick meet and greet with PK Subban before the flight down. 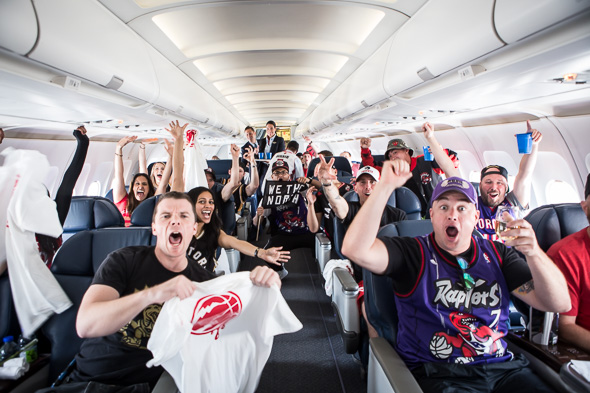 We all piled into the plane for the quick trip across the lake to the shores of Lake Erie. The plane was decked out with roses and Raptors t-shirts and We the North flags were handed out that would later be paraded through downtown Cleveland. 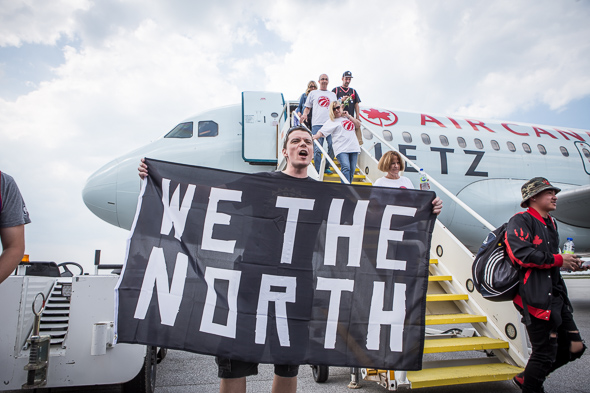 We landed at the Burke Lakefront Airport which is basically Cleveland's version of Billy Bishop. It's only a short bus ride from here to Quicken Loans Arena which is nestled right next to Progressive Field (home of the Cleveland Indians) and in the heart of the historic downtown area where, incidentally, they happen to be currently shooting the latest installment of the Fast and the Furious franchise. 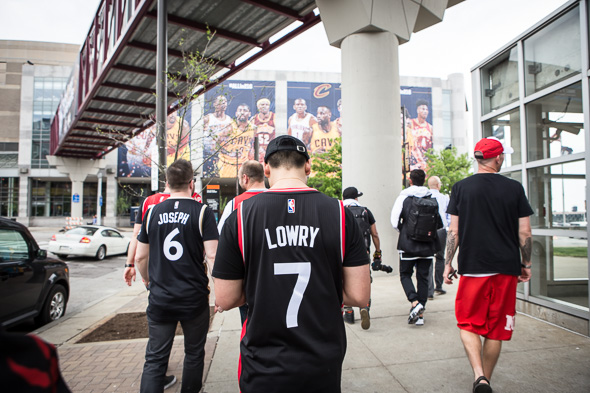 As we approached the arena there were Cavs fans everywhere. We were roundly jeered as we walked down East 4th Street but you could sense the nervousness. One local told me "the Cavs better win" with a tone of trepidation of what might be if the Raptors continued their recent dominance. 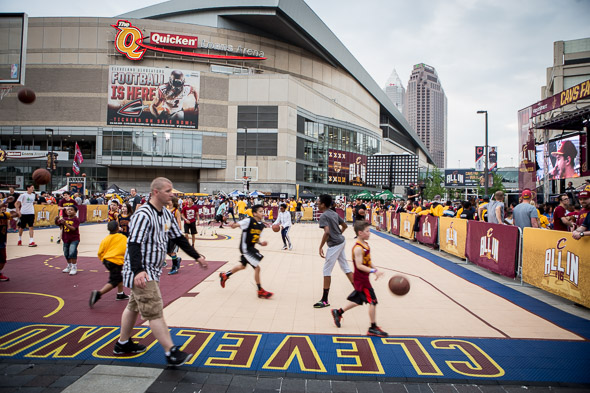 Around Quicken Loans Arena there was a huge FanFest. It was different than Jurassic Park - not meant to be a place to gather and watch the game but instead a pre-game party zone with live music, basketball courts and food trucks. 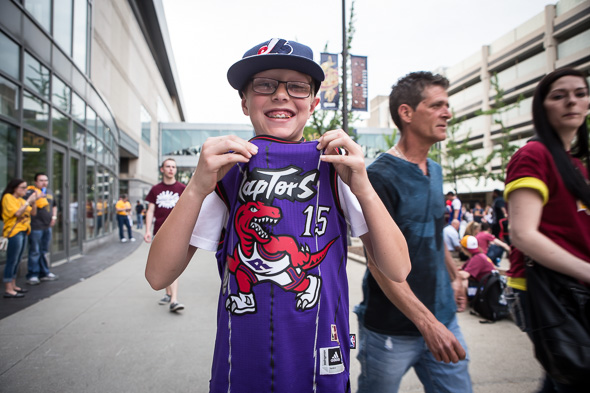 Aside from our crew we spotted more than a handful of Raptors fans in the sea of yellow. 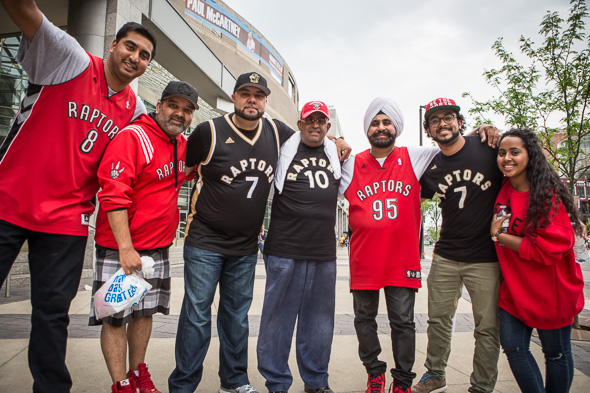 Superfan Nav Bhatia was there - he hasn't missed a Raptors home game in 21 years - and other fans recognized him and eagerly posed for photos. 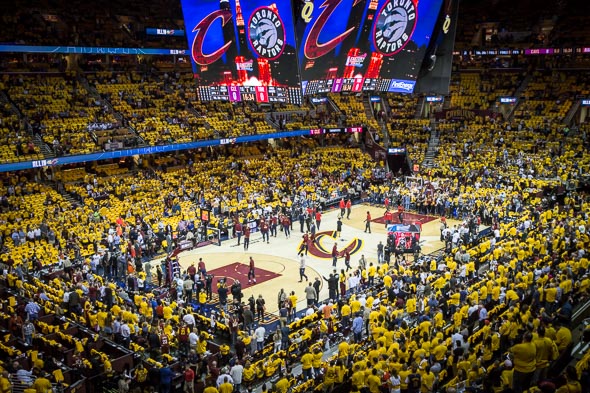 Inside the arena the seats were decked with yellow t-shirts that read Wine & Gold as well as rally towels. 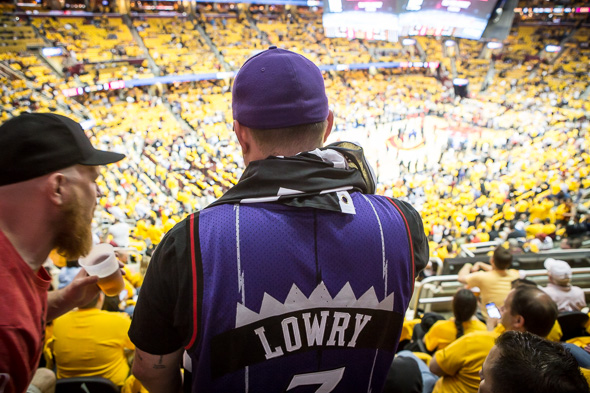 We could see why a road game here would be hostile territory for the Raptors - we were easily drowned out by the 20,000 plus fans who have gone All In for a 2016 title. 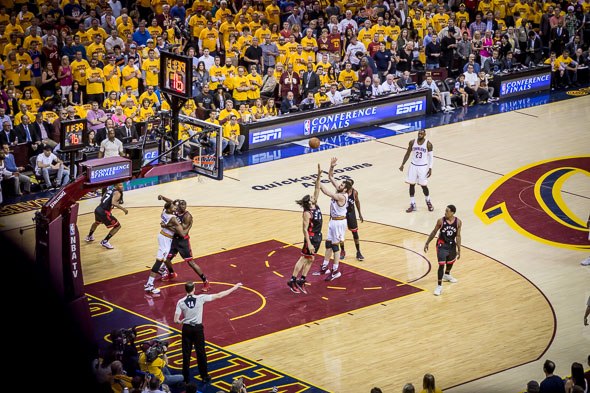 The game started innocently enough - Scola hit a three and the Raptors jumped to a 7-6 lead but by the end of the first quarter the Cavs had gone on a run, were up by 18 and never looked back. The game seemed over before the buzzer signaled it was halftime. 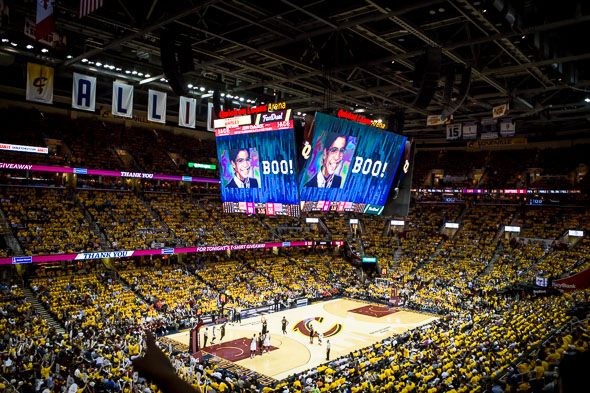 Whoever was responsible for programming the graphics on the HD video screens on the center-hung scoreboard had some fun with them. Images of Bieber, Nickelback and Drake (young and bearded versions) were flashed intermittently throughout the game alternately causing laughter or a rain of boos. 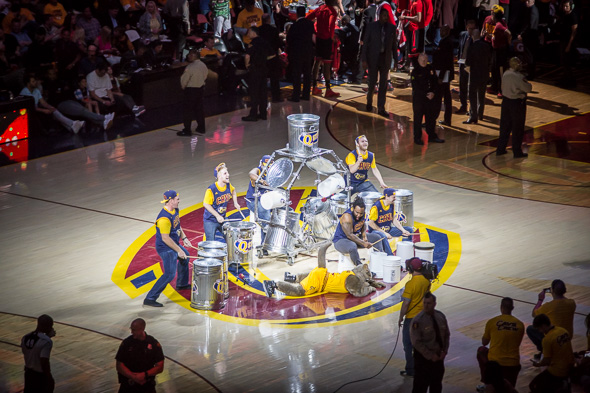 Up by 40 in the third quarter, the Cavs had turned the contest into a certified blowout and some of the entertainment during the time-outs became more captivating than the game itself. 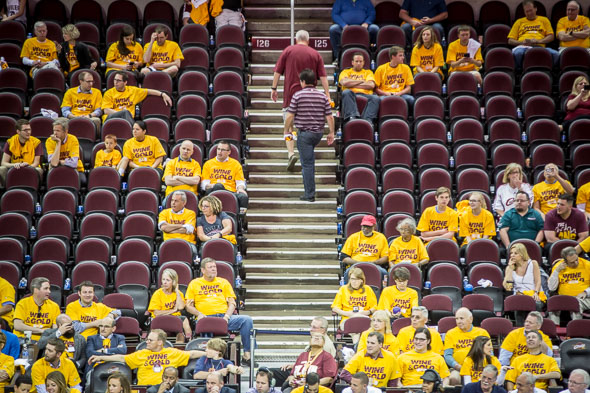 By the fourth quarter the coaches had emptied their benches and fans were flocking to the exits. 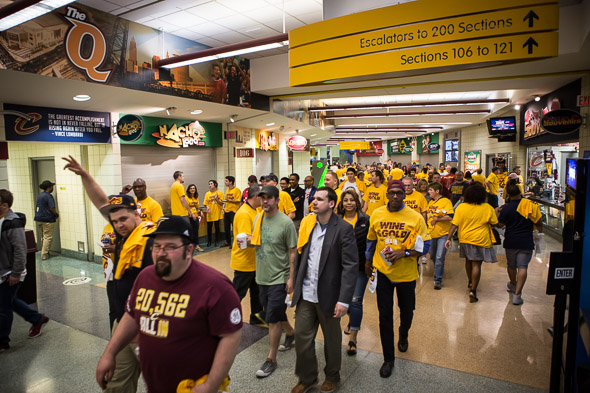 We all had to swallow a bit of pride but only for a night. With the series shifting back to Toronto on Friday night for game six Lowry, DeRozan and co. will be back in friendly territory. And when the series gets pushed to a winner take all game seven back in Cleveland on Sunday, anything can happen, right?