What's going on with the Rouge Park expansion?

Rouge National Urban Park will be the first of its kind in Canada, and it will provide a much-needed green reprieve for Torontonians. But the project is slated to take up to a decade to be fully developed and open to the public, and right now, the process is essentially drowning in a pool of government bureaucracy.

Pam Veinotte, field unit superintendent for Rouge National Urban Park with Parks Canada, says there's lots to be done behind the scenes amongst government before the park can be open to the public, even though much of the intended park land is already green space, and it would appear to be a relatively straightforward process.

"[We have to conduct] all the land surveys, land titles, and take a look at whether pieces or parcels of land need an environmental assessment. Every jurisdiction has its own process..."

That work is well underway, she says, but there's no estimate as to when the park will be open for frolicking.

Right now, the most pressing step is to sign over the lands in the study area to Parks Canada. The patch of green space for park designation, in the northernmost part of the city, is in joint custody of Toronto, Pickering, and Markham. They, alongside York Region, Durham Region and the Toronto and Region Conservation Authority, need to sign over either land or municipal services to the parklands, and much of the work that needs to be done to create the national park cannot happen until that's done. Municipalities are in the process of signing over their lands now. Veinotte says it's impossible to provide an estimate even of when this first step will be complete.

Rouge Park already exists in Toronto, but this process will make the park much larger, as well as give it an official designation as protected green space for the millions of us who live around it. Currently, it's about 41 km sq., and the parklands begin just above Steeles Ave., and run down to Lake Ontario, culminating in Rouge Beach.

The study area, on the other hand, would stretch the park to about 58 sq. km., extending to 19th Ave., almost up to Stouffville and the lower portion of the Oak Ridges Moraine. 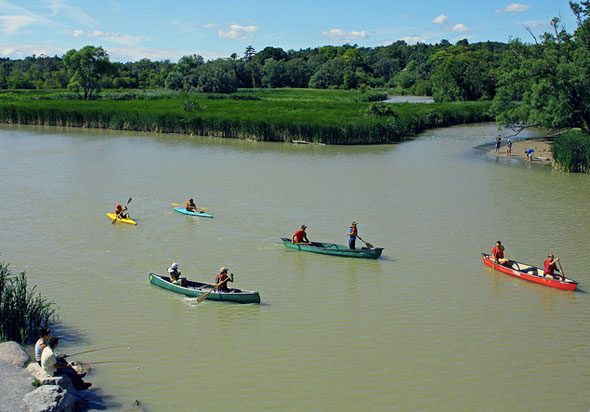 Though the park seems like it will take forever to open, there are some really wonderful aspects to the plan that will undoubtedly enhance Torontonians' quality of life. To supplement the camping already available at the park, Veinotte says oTENTiks might be installed (which are a cross between a tent and a cabin, come with a firepit, and are furnished, in case you don't like sleeping on rocks/dirt). At the present time, the park is without washrooms, as well, so those will be installed, too.

And alongside becoming the first national park to be almost entirely surrounded by urban life, Rouge Park will also be the first Canadian national park to include agriculture in its design. The details of that are still in the process of being planned, but some groups are already pushing to ensure that agricultural uses make up a good chunk of the park.

All of the commonly expected park elements will also be available, meaning there's a host of adventuretime possibilities: there will be trails, beaches, various recreational activities, and youth programs.

The lands are also home to a number of at-risk species, rare Canadian forests, and evidence of lives lived by Indigenous peoples over 10,000 years ago. That part of our cultural heritage will be honoured in a number of ways, Veinotte says.

Rouge Park, as it is now, was established in the mid '90s by the provincial government as a response to public concerns about protection of the river valley. The federal government committed to designating it Rouge National Urban Park in 2011, after years of lobbying by environmental groups. And in May 2010, the feds committed $143.7-million to be used to establish the park over the next 10 years. Following that, $7.5-million per year has been allotted to the ongoing operations of the park.

Lead photo by Kaeko in the blogTO Flickr pool