The truth is out there at the Toronto Psychic Fair

The Toronto Psychic Fair at Exhibition Place was, for one gloomy April weekend, the city's nexus of weirdness. That's saying a fair bit - I see your freak lurking behind the glass of every condo window, Toronto.

Amid the crystals, jewels, and incense, it seemed like everyone at the fair but me had an alien encounter and/or tale of true spiritual enlightenment to recount. To be an enthralled yet skeptical tourist at a psychic fair is like watching the first three seasons of the X-Files at the IMAX after consuming a midsize carnival's daily output of cotton candy: inexplicably beatific. 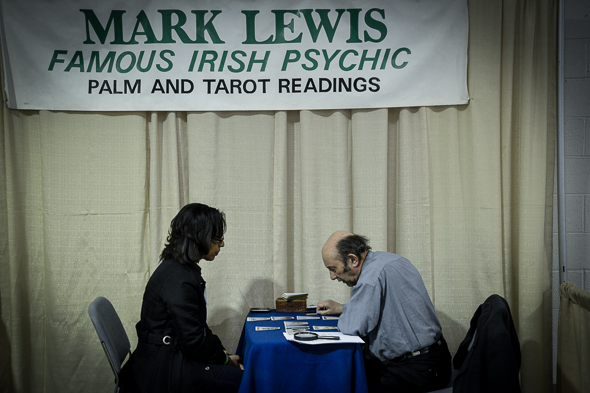 A well organized psychic fair is not just a jumble of cloaked figures leaning over indistinguishable crystal balls (though those were for sale) - all manner of magic capitalists sat behind the booths: mystical diagram painters, Ufological stugy groups, electric psychics, animal reiki practitioners (though no animals were in attendance), and my favourite dude: Mark Lewis, Famous Irish Psychic, whose banner looked like one that might adorn an Irish pub.

Lewis, master of the "Irish version of Chinese numerology," was the funniest person I've ever hovered over. "Look at the comments in the book to see how good I am. I was up all night writing them so you may as well have a look," he encouraged one visitor between card tricks. 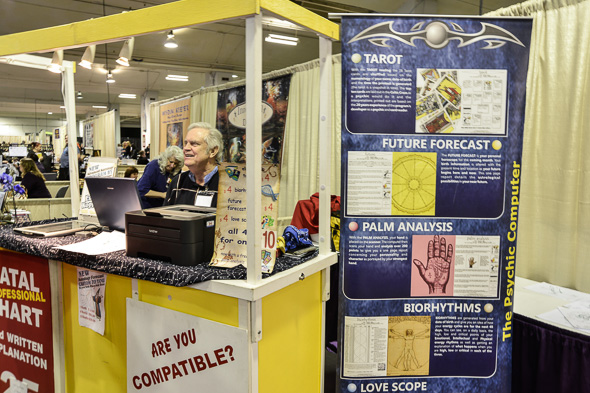 I was given a presenter's badge - apparently media requests are rare - which led to my eventual realization that the psychics and tablers weren't ignoring me because I didn't look like a card - they thought I was magically endowed. Plus, "media" sounds like "medium" to spirit-weathered ears, which yielded me the kind of respect I rarely receive as a lowly digital editor. It also helped ease the pressure to spend big money on communing with the great beyond. 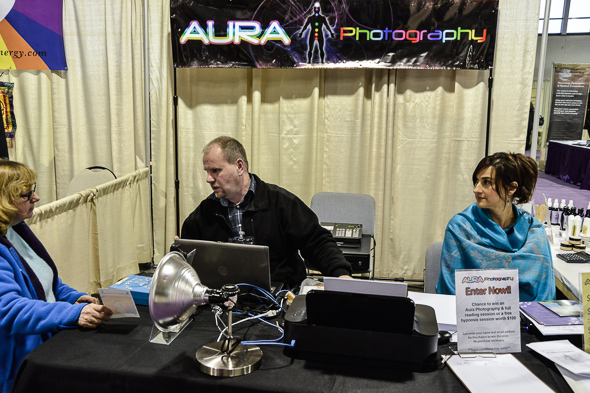 #psychiclife as a whole looks fairly sweet - most mediums, fortune tellers, tarot, aura, and palm readers, and past life regressors were charging $45 and up for a half hour and in the neighbourhood of $80-100 for an hour. The electronic aura reader's intriguing booth boasted what looked like an old analog effects pedal with hand-shaped heat sensors hooked up to a laptop. The aura reader assured me it was a very expensive machine, programmed by real psychics. 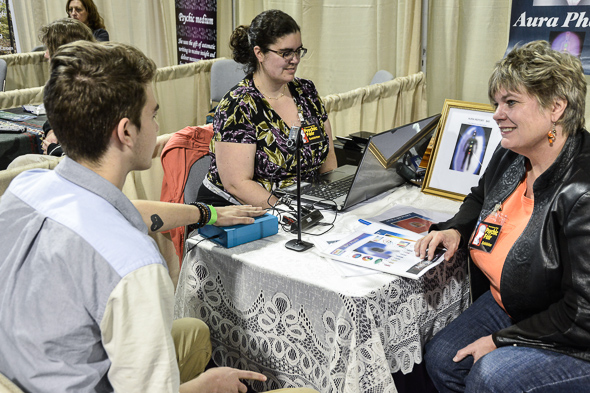 I found the Stephens, a couple from Michigan who hit up to 30 psychic fairs and events per year, at one of the fair's most colourful booths. Mystical art reader Beverly Stephen paints abstracts and then reviews them while still wet, like an art prof at an OCAD crit armed with a laser pointer. Mr. Stephen described meeting the same people at various fairs across Ontario and the United States each year, and told me the two had quit their jobs several years ago to take touring life seriously - and they've never been happier. It was a genuinely heartwarming story. 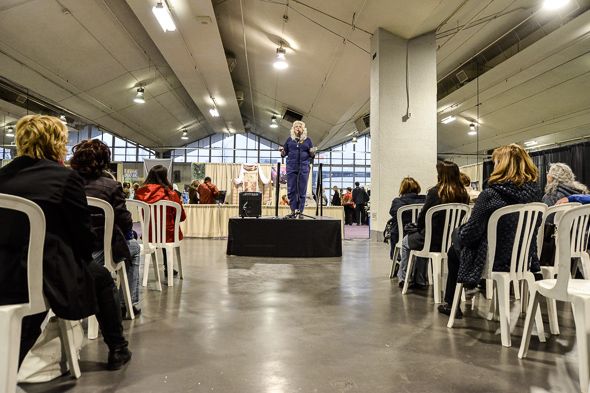 Quitting your job turns out to be a big thing in the psychic community (as is outrage over Hollywood's portrayal of their various gifts and powers). During the lectures, nearly every presenter narrated the story of the moment they quit their job, and one advised we do the same, or at least not worry if we get fired when spiritual healing changes our energy fields. Not the best advice in troubled economic times, but who am I to argue with the spirit world? 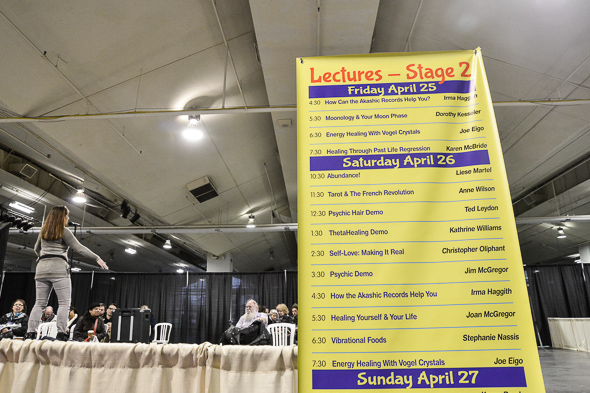 The fair advertised two stages of lectures, which turned out to be its strangest (read: best) feature. An audience of 80%+ women would sit and listen to "exciting free lectures and demonstrations," which of course were just exhibitors taking opportunities to shill their booth for a half hour. 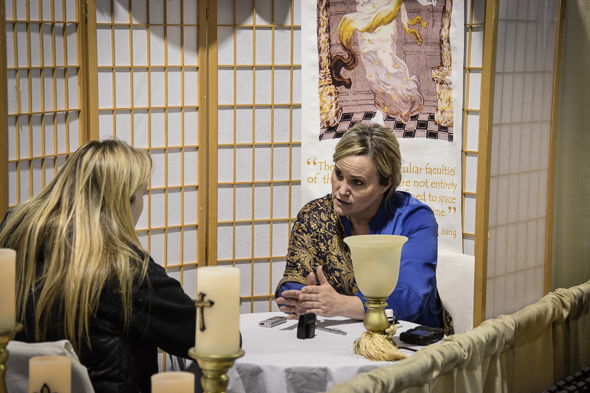 Joe Eigo's presentation "Energy Healing With Vogel Crystals," like many others, started off tame (changing water structures with crystals, chakra-talk, etc) before amping up into real conspiracy shit. Eigo revealed to the sparse but patient audience that the Scarborough Bluffs are a powerful vortex (Toronto's highest concentration of energy), and Toronto itself is an alien hotspot.

Later on I saw Eigo, a high energy dude himself who's taken photographs of both fairies and extra terrestrials, twist a sharpened crystal at a woman's neck to draw out toxins while her friends looked on. (If someone came at me with a dagger-like crystal the size of a puppy, I'd flush some toxins too.) 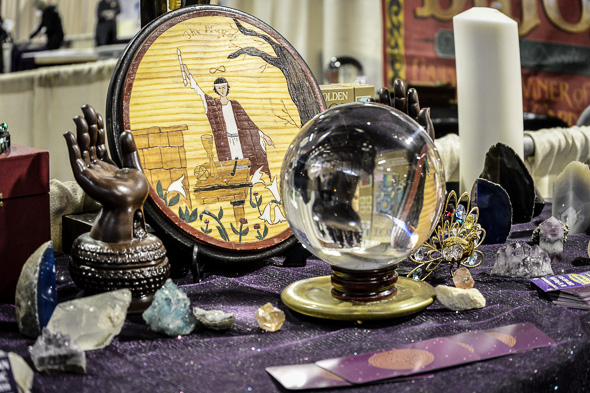 Karen McBride's "Healing Through Past Life Regression" lecture was more controversial. Again, she started tame with the observation that some birthmarks are scars from past lives and moved ever onward into past life regression will "melt the pounds away" and ADHD is caused by kids connecting to other planets. She eventually revealed (if that's the right word for it) that 2012's non-apocalyptic energy shifts caused loads of emotional chaos in the powerful changeover leading up to 2013's (wait for it)... Toronto ice storm. What does ice look like? Crystals. Dramatic pause. 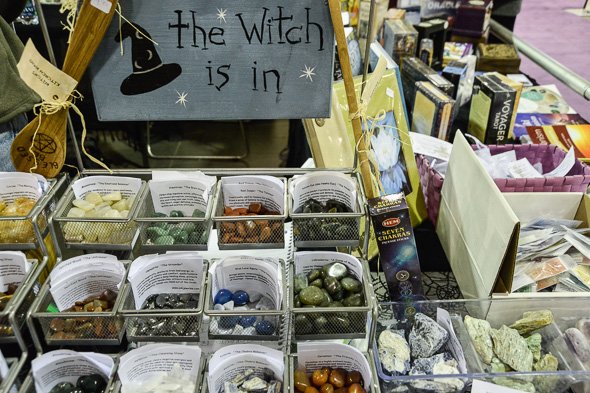 There were no obvious gigglers in the audience, and in general it was hard to tell who was a tourist and who was a believer, unless you were eavesdropping mid-reading/cleansing/communion. Everyone who wasn't behind a booth - and most of the psychics themselves - looked pretty normal, and the quirky sign that said "The witch is in" could easy have said "Bless this mess." Jesus was in the building at various times, or so various presenters claimed. 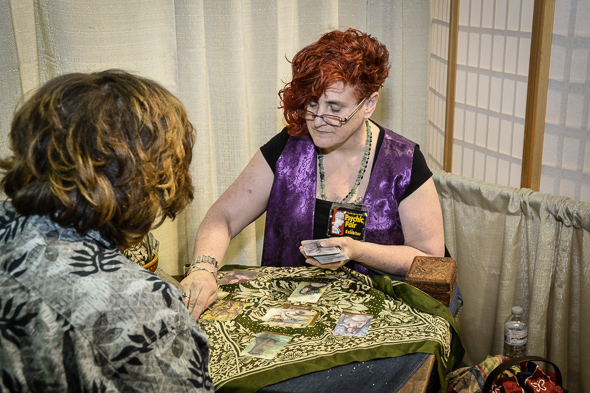 I contrasted my experiences with those of a punk I know who reviews churches (read them all, he's great). How much can a tourist really know about the true meaning of the scene they visit? I might have been in, ostensibly, a room full of swindlers - but all I saw this weekend was people bending willing patrons' realities for money and offering cliched counseling tied up with harmless entertainment. And a spirit trumpet - something I have never seen at a punk show. 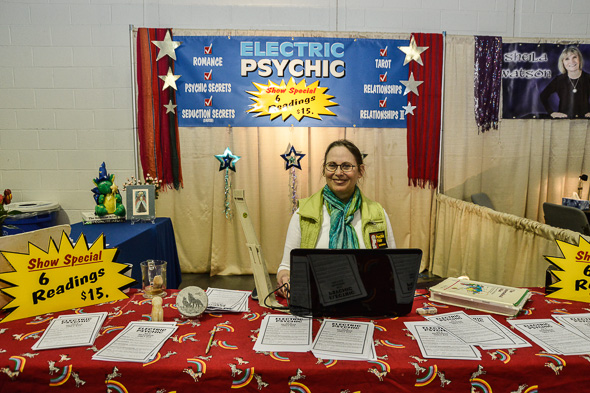 Sipping a terrible $2.75 coffee from Pickles Deli while a couple of girls at the next table incredulously dissected their readings - "I know my past, I wanted to know my future!" - I achieved the only spiritual need I have: the state of divine kitsch-bliss. In my enthusiasm for winning a free aura scan or something I may now be on a network-wide psychics' mailing list, but they already knew where I live. Even if none of these psychic scenesters are truly gifted, their aliens pals likely are.