Behind the scenes at Cervelo Cycles in Toronto

CervÃ©lo might just be the most innovative bike company in the world — and its Toronto-based headquarters is the type of place to send a tingle up and down the average roadie's spandex-clad back. One wall is entirely whiteboard — with sketches, equations, and complex diagrams offered as an inadvertent equivalent to decor. Men with rings on their pinky fingers spend their days tinkering with the latest and greatest in software applications, trying to find that optimal balance between strength, stiffness, and aerodynamics. And needless to say, there's more than enough storage on site for those who decide to cycle to work. This is where all of that P5, S5, and R5 magic starts before it makes its way to the European pro peloton. 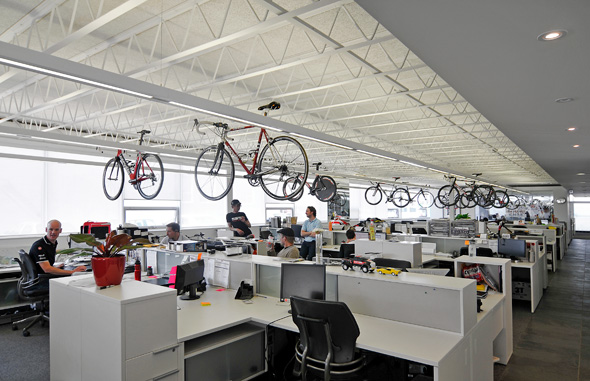 CervÃ©lo was started by two engineers back in 1995. Phil White and GÃ©rard Vroomen took their existing knowledge of time trial bikes and assembled a team to design and construct a superior model, with an specific focus on aerodynamics. The company launched two road and two time trial models the following year, a humble beginning that would eventually lead to an exclusive deal with Team CSC, a tier-one pro cycling team that took home the 2008 Tour de France, and a reputation as one of the most advanced companies in the cycling industry. 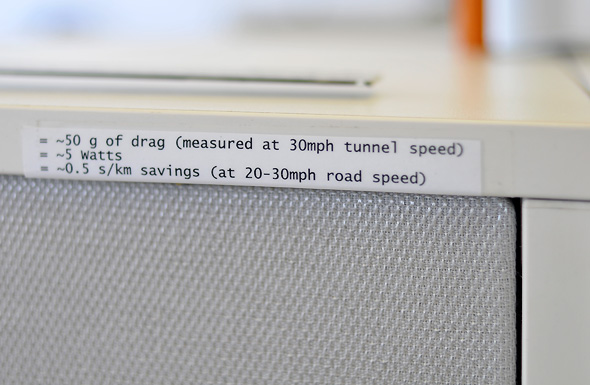 That reputation in mind, I expected a mild confrontation of statistics, simulations, and numbers as a greeting during my trip to CervÃ©lo's headquarters. And, that's exactly what I got. I'm welcomed by Peter Donato, who leads me over to the "engineers' corner," which is set to a literal backdrop of dry-erase geometry. It looks like a capture from A Beautiful Mind, but with references to fortification, carbon fibre, and the odd sketch of an aero head tube cross section. "This is where it all happens," Donato says with a smile. 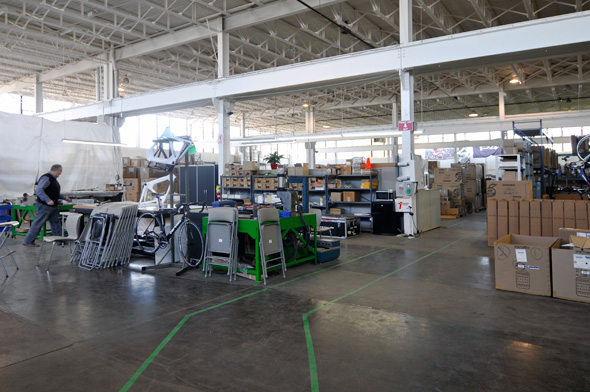 The engineering, that is. While the CervÃ©lo frames are actually manufactured in Asia — as is the case with most North American bike companies — the innovation (and assembly) happens here in Toronto, just north of the Castlefield Design District (how fitting). The company was formerly located in a pre-condofied Liberty Village, until it simply outgrew its space. "We had about eight people working here in the early 2000's," Donato says. "That has now grown to about 80." 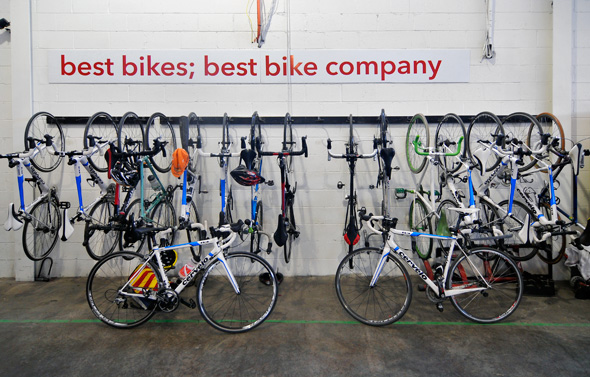 Unsurprisingly many of these employees cycle to work, and Donato shows off the racks where the staff park their steeds for the day. Of course, the majority are CervÃ©los (lots of R3s), though we do notice the odd alien brand. "Those people are new," an employee passing by quips. "That'll change."

Although this is place seems as much about aerospace engineering as it does about the putatively simple act of cycling, there are signs everywhere that the staff are bike nerds. Everyone's drinking out of their company-branded water bottles, cycling caps are a common sight, and one can't help but get the sense that, if freed from their desks, most of the folks here would drop the average enthusiast on a steep climb.

Team-building exercises for the CervÃ©lo gang naturally come in the form of regular rides, which are held two to three times a week during the warmer months. But there's another cycling morale-booster that's made obvious to me right from the onset of the tour: staff desks sit below suspended examples of the company's many competitive successes. 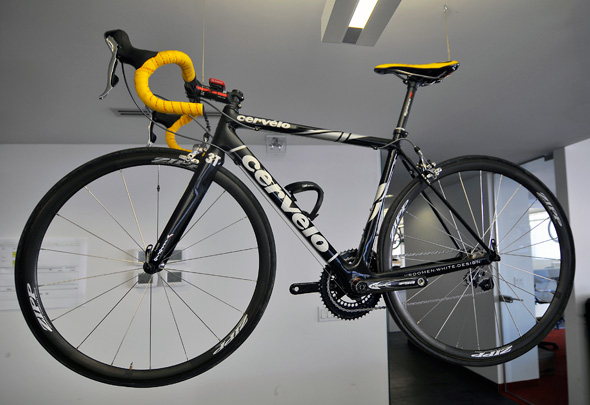 There's Thor Hushovd's S3 from the 2009 Tour de France, at which he rode to win the Green Jersey, Tyler Hamilton's Soloist from his 2003 LiÃ¨ge-Bastogne-LiÃ¨ge breakthrough (the first major pro-tour win for the company), and perhaps the most significant of all, Carlos Sastre's 2008 Tour de France-winning R3, complete with its iconic yellow handlebar tape (nerdy note: Sastre rode Zipp 404s across the line in Paris, while this bike is outfitted with 202s). 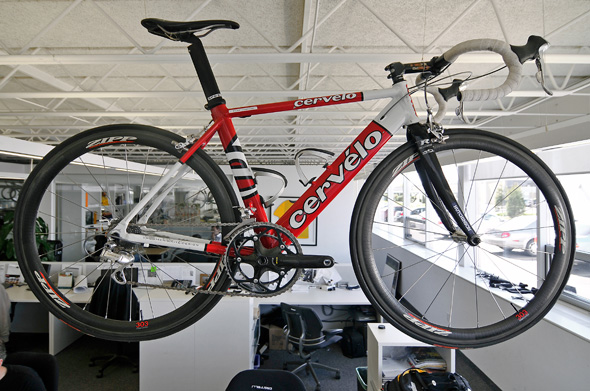 Beyond the workstation is CervÃ©lo's manufacturing and testing area, where senior engineer Damon Rinard explains the complex aero concepts in layman's terms on our behalf. He shows us a test mule for a wind tunnel assessment and a cross section of a tapered head tube (pointing out the variable thickness of its walls in order to emphasize the importance of knowing what carbon to use where). "We have aerospace engineers — people who used to work on rockets — constantly trying to find new ways to make these bikes even better." And he says that with Pink Floyd's "Eclipse" perfectly timed in the background. 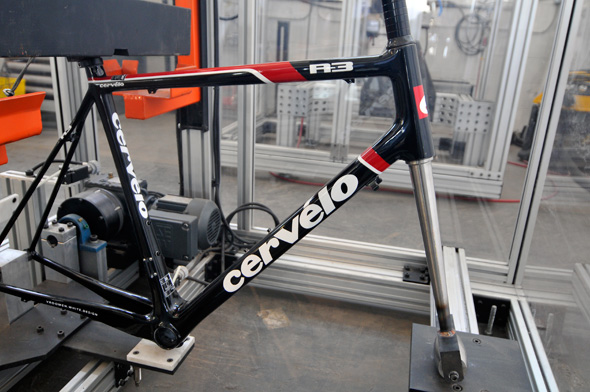 We then make our way over to the engineers' computers, where graphs show us the effects of 12 different iterations of a particular frame section on the bike's overall weight, stiffness, and aero characteristics. We watch Computational Fluid Dynmaics software in action, simulating a wind tunnel to measure air flow/resistance to produce a honed list of test mule formations that actually make it to the physical assesment. "In part, with this software," Damon says, "we were able to get better improvement from the P4 to P5 [time trial bike] in two years, than we were from P3 to P4 in four years." 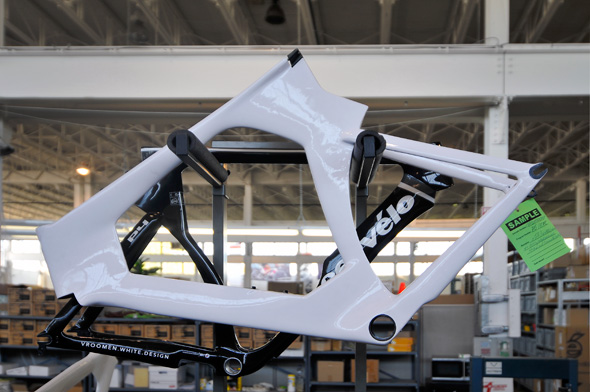 The enthused engineers I meet at CervÃ©lo tell me that quest for improvement will never reach its saturation point. And while its bikes certainly don't come cheap (think $2500 as a starting point), you can be guaranteed there are brains working behind the scenes to make them evermore light, sleek, and strong. Superior enough, that is to say, to merit a suspended spot above their computer stations.

Photos by a still-drooling Derek Flack