Toronto gets its own boutique baseball bat company

Toronto may be a hockey town by reputation, but that doesn't mean that baseball doesn't have a long tradition in this town as well. In fact, the Toronto Maple Leafs was the name of a local baseball team long before Toronto St. Patricks hockey team decided they'd adopt the moniker in 1927. That baseball team once played out of a majestic-looking stadium near where the ferry to the Island Airport departs until the franchise left town in 1967. A semi-pro team still sports the name to this day, as baseball fans and Christie Pits residents already know. One could also add that the city's only big league championships of the last half-century have come courtesy of the Blue Jays, but this is old news.

To add to this rich, if often under appreciated tradition, Toronto is set to get its own boutique baseball bat company. Founded by illustrator Dave Murray (of whose neighbourhood maps we've previously gushed over) along with furniture maker C.R. Fieldhouse and graphic designer Ryan Christiani, the Garrison Creek Bat Company will produce handmade bats in a serious of styles devoted to some of Toronto's best-known city parks. Their first model, The Bellwoods is a reminder of what gorgeous design objects wooden baseball bats really are. But will people actually use these things?

I caught up with the company's founders to ask about where they hope to take the project and what it is about baseball bats that captured their imagination.

First off, why baseball bats?

Dave Murray (DM): When my friend (and parter in GCBC) C.R. brought up the idea a few months ago, I immediately loved it. We had brought the gloves out of retirement last summer, and it was a lot of fun to go out and enjoy the outdoors and play some baseball. It's also a nice change of pace for me, personally. I pretty much do nothing except for deal with paper, screens (for printing my neighbourhood maps) and computers all day; having something like this which actually gets me out of the house AND challenges me creatively is pretty awesome.

Ryan Christiani (RC): Why not?! I think for me, baseball is the quintessential summer sport, and one of the main goals we had going into this was the idea of getting out there and exploring the parks, having a great time with some friends. And maybe get a little exercise.

C.R. Fieldhouse (CRF): I started making bats over the holidays, and right off the bat (pun intended) we were seriously taken with the feel of the bats - that instant tactile reward you get holding handmade, heavy and well finished objects. We quickly realized that we were on to a great concept. The vast majority of bats these days are industrially produced to exacting standards, and most of us grew up hitting with metal bats. Baseball has traditionally been a community game, a sport that brings towns and cities together, and we felt that the tools of the game should reflect that home-grown, local tradition. We want our bats to reflect those feelings and values of craftsmanship, local production and pride in what your produce. 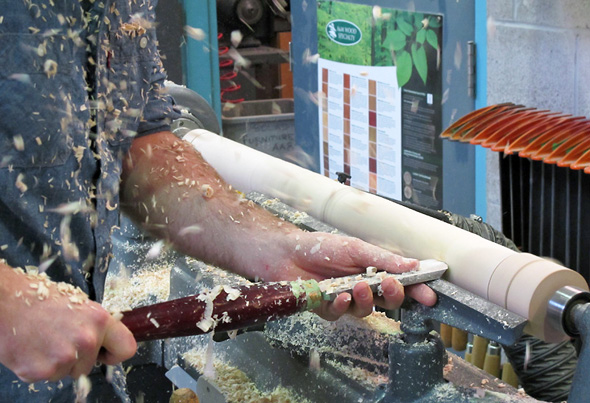 CRF: The three of us have all lived on or around the old Garrison Creek for quite some time. Our neighbourhood is both geographically and historically defined by it. Most importantly, some of Toronto's most loved and used parks fall within the old Garrison Creek watershed — Christie Pits, Trinity-Bellwoods, Stanley, Bickford, Dufferin Grove. Christie Pits is home turf for the Toronto Maple Leafs baseball team, and Bickford, Stanley and Bellwoods all have diamonds. With such a strong connection to where neighbourhood games are played today, the name really seemed to fit with the local feel we are trying to give our bats.

RC: Plus, it just sounded great as a name.

Do you intend these more as collector's items or as objects that'll see some time in the batter's box?

RC: I think that is more up to the person who buys a bat. I would love to see them being used while I am riding my bike through a park! But I am also completely ok with someone who just wants to display it. Maybe Bellwoods holds a special place in their heart from their youth, and the bat just brings back those memories.

DM: I definitely see the artist bats that will be on display at our launch party as collector's items - though whoever purchases one is absolutely free to take it out to the park and use it (I wouldn't recommend it). The production bats I can see going either way. As a design object, they look fantastic - C.R. does absolutely beautiful work crafting the bats, and a lot of care goes into the paint, branding and finish of each bat. They'd be as much at home on display as they would be on the field.

CRF: As designers and artists Ryan and Dave are used to making things that people want to hold on to. And, as a furniture maker, I have a passion for making things both beautiful and functional. Part of the handmade aesthetic we are working with has to do with how we value our belongings. I personally feel that there can be a good materialism - a materialism that speaks to valuing long-lasting beautiful objects and materials, rather than a disposable, consumption-based materialism. 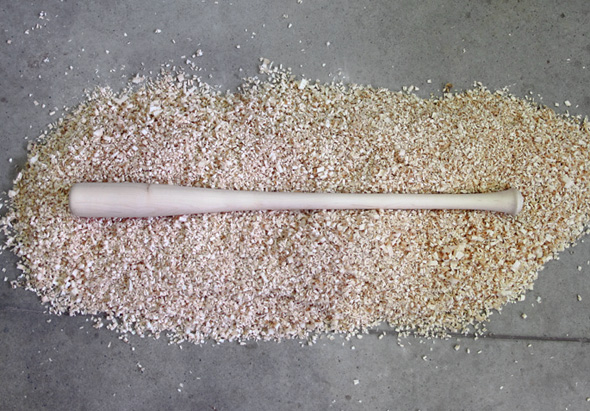 Your first model is the Bellwoods bat. Can you give any hints as to other parks that you plan to feature?

DM: I think Christie Pits is a pretty popular choice for the next round of bats, but there's a lot of options to choose from.

CRF: Ha ha, yeah - we've been thinking about this. We definitely want to celebrate the Garrison Creek Connection, but we also want to be sure and share the love around the city. Toronto's first baseball stadium was built out at Queen east and the Don, and there are parks all across the city people love to play in. We've looked at High Park, Riverdale, Christie Pits and Woodbine as potential future models.

How do you hope to communicate a sense of place on each bat?

DM: Playing around with paint schemes, branding, and lettering to reflect each location is a great design challenge. My main goal with each model is to incorporate elements of each location meaningfully into the established branding of GCBC; not to have those elements completely take over the appearance, but to be worked in with more subtlety. The link to the location and it's idiosyncrasies is still there, but it's more of a tip of the hat rather than a full-blown tribute.

There are a number of you involved in the project. Can you tell me about each person's role?

DM: My role, for lack of a more refined title, is essentially "creative director." I'm more or less in charge of branding the company, as well as branding each new bat model we come up with. Things like painting, typography, and general aesthetic appearance fall under my umbrella, though everyone is free to ad their input the process. 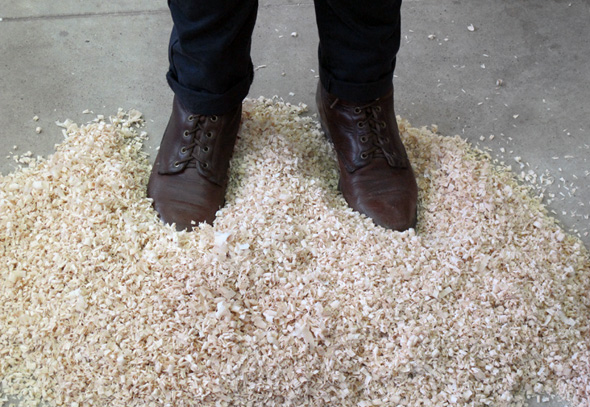 RC: I'm handling the web and business end of things — all of the back-end stuff. My goal is to make sure everything runs smoothly — so far it has!

CRF: I get to do the dirty work — designing and manufacturing the bats. I also source out materials, work out finishing processes and inspect each bat. And, as Dave said, it's a pretty democratic system. While we all have our own strengths, everyone is welcome to share their input at every stage of the process. We also all work together brainstorming new ideas, and handling day-to-day logistics.

How many bats do you plan on producing for each limited edition?

DM: The plan is to make 10 bats. We really want to emphasize that these are special pieces - everything is sourced and made locally. It's not something you can go and buy at Wal-Mart or Sport Chek. We've even commissioned other local talent - my friend Robin Akitt (shipislandleather.tumblr.com) - to make custom carrying bags for us. They look great - seeing the bags for the first time was pretty much better than Christmas.

CRF: We've been looking at 10 as a nice round number for each edition. This is a new market and new product, and we are really concerned with keeping these as cherished and valued items. If the first run goes well - and we've already got some great interest - we've been looking into ways to expand our production capacity. We definitely want these to be an accessible product, one that many people can enjoy and play with, but we also want to emphasize that they are locally produced, handmade objects.

Is there anything else you'd like to tell us about the GCBC?

RC: Not much really, we are just a few guys who thought it would be a lot of fun to create a quality product and work with some local talent. The buzz surrounding the art show/launch party has been great, so hopefully it goes over well!

DM: I think Ryan put it best - as friends, we had been looking to work together on something creative for a good while. When this idea came up, it was perfect. The energy that's been put into it thus far is amazing. I can't wait for the launch party on the 26th - some serious talent has signed up - and for the rest of the summer, getting out there and having fun with the bats.

CRF: Look for us swinging some test bats around town as the weather warms up! 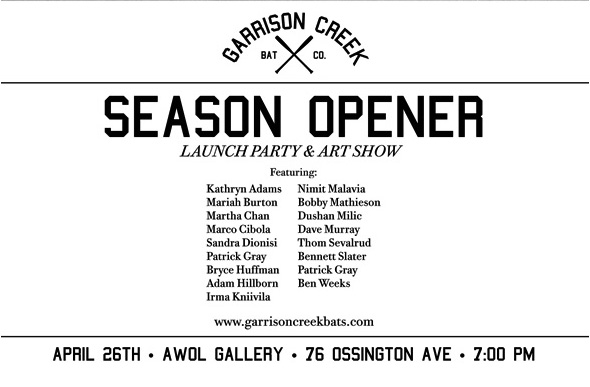 For more information about the launch party, check out the company's Facebook page.