WOW Rotisserie Chicken, a newish joint at King and Portland , is boldly named. As a verb, to wow is to amuse or delight. As an interjection, it indicates surprise, and depends heavily on tone for meaning. My guy and I visited Wow's little dining room on a recent Friday night, finding occasion for several different types of wows.

Our first wow was the excited kind, inspired by a menu filled with creative choices at affordable prices. We ordered the Half Chicken Combo: we were content to take a side of Purple Coleslaw, Stuffed Potato and pop, but impressed that for an extra $3.50 we could've swapped our slaw for Caesar Salad and added a brownie. We also ordered a Half Rack of Ribs, and the Seasonal Soup: Creamed Corn and Chicken, and started feeling excited about the feast to come. 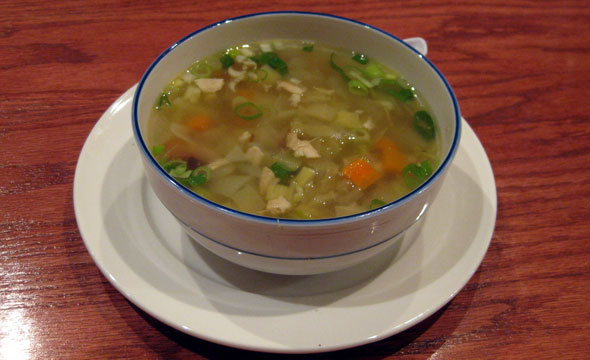 Our "Creamed Corn" and Chicken Soup arrived first. Much to our surprise, it was neither creamy nor corny. In fact, it was so visibly un-corny looking we questioned our server immediately: "Is this the Creamed Corn and Chicken Soup?" She glanced at it, whispered a halfhearted "Yeah", and spun on her heels, hightailing back to confer with the cooks in the semi-open kitchen. We were pretty sure they were talking about the soup back there, but no one came out to explain why the Creamed Corn Soup was completely devoid of corn, creamed or otherwise. "Wow", we said disapprovingly, "this soup sure is poorly named". Whatever it was, it tasted alright: generous chunks of chicken and a plethora of vegetables, but too salty for my taste.

Normally I'm a big salt fan, the kind of gal who dips her finger in salt and vinegar popcorn seasoning, gleefully eating scoopfuls of pure sodium until the top layer of my tongue starts to peel. So when I say something is too salty, it should be taken as a serious warning. Unfortunately, almost every dish we sampled that night was like that, challenging both our taste buds, and my vocabulary. Brackish, briny, saliferous and saline--my thesaurus holds the key to describing a meal with very little depth or range, a meal dominated by the singular flavour of salt. 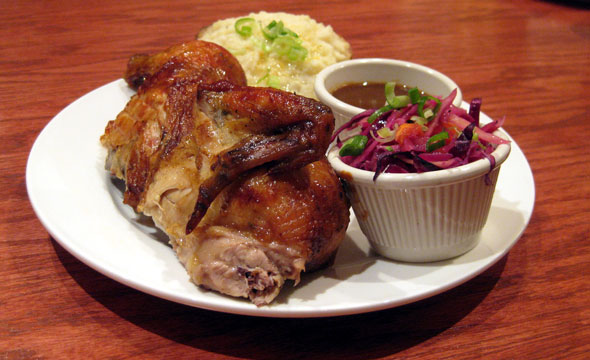 So sodium-coated was the flaccid, rubbery skin on my not-too-tender chicken that it was difficult to eat. Determined not to waste our meal, I suggested to my love that we bring it home so I could boil it into a tastier soup, but he refused. "I'm not taking that home" he protested. "I'll buy you a deli chicken from Sobey's, but nothing good can come of that chicken". Same went for the side of sauce, our little container tasting like Swiss Chalet's version, plus caramel colour and an extra tablespoon of salt.

Gleefully, our too-tough ribs were not too saline, each straight-from-the-BBQ-sauce-bottle-bite providing welcome contrast to the tongue curling sodium fest of the other offerings. Similarly, sides of purple slaw offered crunch and a novel flavour: too much pepper. 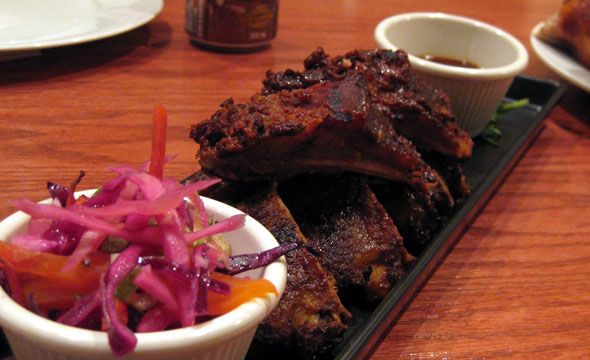 The stuffed potato was perhaps the most interesting dish we sampled. Like a time machine, it took me back to the 1980s, to the days before non-hydrogenated, heart-smart versions of butter's bastard sister dominated the bread-spread landscape, when margarine was bright yellow and tasted like nothing else but margarine. This dish, margarine-mashed potatoes nestled in potato skin, offered a flavour I hadn't had in years. Although that flavour wasn't very good, it did spark forgotten memories, like visiting my mom in the hospital, and eating her cafeteria leftovers.

My guy and I had entered WOW Rotisserie Chicken and Ribs hungry and excited, but left dejected. Halfway home, my sad sweetheart turned to me, and smacked his lips, "Wow," he said, "I'm thirsty".