Veghed opened in November 2014, taking over the space formerly occupied by the cafe Eagles Nest on Dundas West . Primarily a takeout spot with a few stools for dining in, don't let the neon green walls and casual vibe fool you - this place is helmed by a chef who's had over 20 years'-worth of experience working in high-end restaurants, including three-Michelin-starred bastions of gastronomy in Europe with some of the world's top chefs, including Marco Pierre White.

Owner/chef Ren Mercer most recently left a gig as executive chef at the Spoke Club to start up this new business with his partner, Ruth Magbanua. Mercer, who was raised on a vegetable farm in the Cambridge-Waterloo area with what he calls a "Neo-Amish" family, and Magbanua, originally from a rural part of the Philippines, noticed a growing number of family members with cancer and decided they wanted to focus on developing a healthier diet. 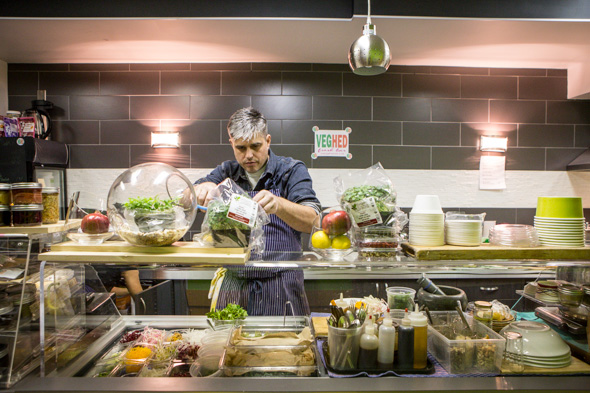 Veghed is a chemical-free food shop/catering company that specializes in non-GMO products with organic, plant-based food options where pretty much everything is vegan or vegetarian. (Although Mercer notes that they do still eat meat, and he can butcher a whole animal if he has to.) In a way, Mercer has returned to his roots. 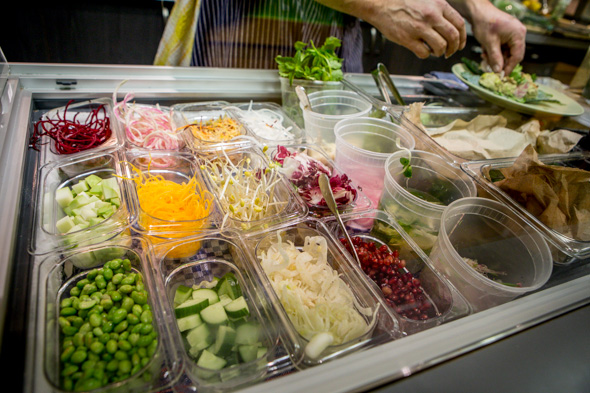 The kitchen is in plain sight so that customers can see their food prepared right in front of them, and pre-made items are clearly marked with a list of ingredients and any allergy warnings. A new menu was launched earlier this month and will change seasonally to reflect what's available in terms of produce. 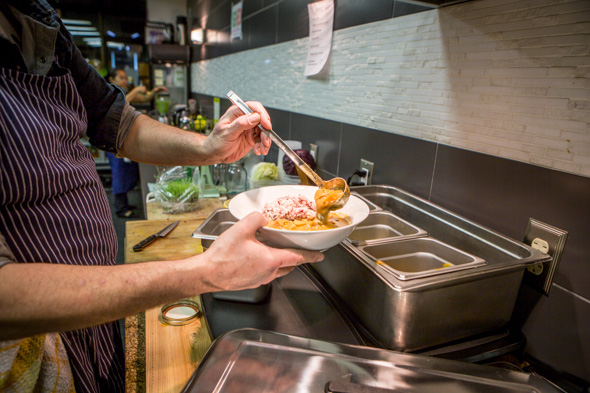 Gourmet grilled cheese sandwiches containing luxe ingredients like smoked, aged cheddar and ancho onion chutney, or goat's cheese and burgundy truffle honey ($6-8), can be turned into meals by adding your choice of salad and a water for $5-6 extra. 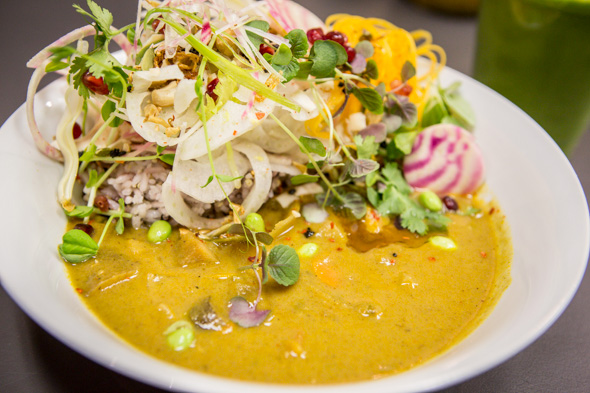 All-vegan, hearty soups are also on offer, like a Thai coconut curry ($9) that contains an overwhelming number of ingredients, but looks like a work of art. There are colourful candy cane beets, edamame, carrots, celery, potatoes, pomegranate and pumpkin seeds, cashews, rice, cilantro, freshly snipped sprouts...and more, making for a more stew-like eating experience than a soup one. 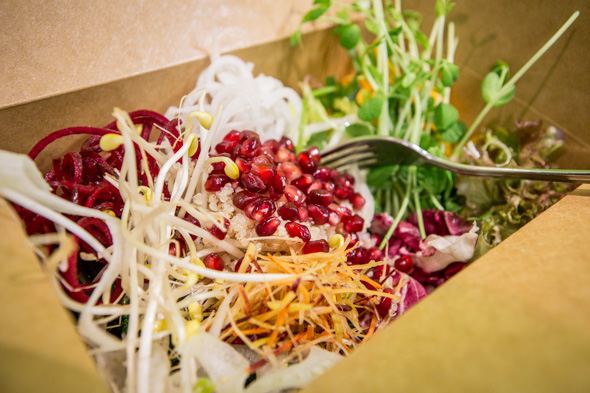 Colourful salads ($9 for a 1-lb box) are also lovely to look at, packed with quinoa, kale and other greens, shaved heirloom carrots, mint leaves, radishes, bean sprouts, pomegranate seeds - you get the idea (basically, healthy ingredients galore). An avocado, keffir lime and green tomato dressing makes for a tasty topping. 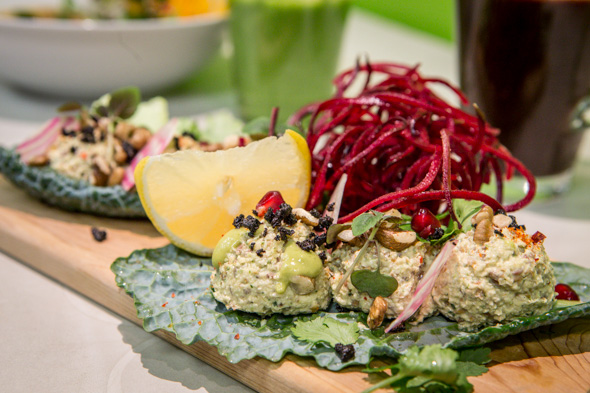 Mercer has also been experimenting with something he calls raw falafel ($7/snack size, $12/meal), essentially scoops of what taste like falafel - minus the deep-frying - on crisp pieces of kale, plus pretty garnishes. They're flavourful and definitely reduce the nagging sense of guilt I feel when eating the greasier, fried version.

House-made packaged baked goods also remove some of the guilt of indulging in dessert, since they're all vegan, GMO-, gluten- and nut-free. Magbanua developed the recipes when their son was born, wanting to come up with ways to create something that tastes sinful but is relatively healthy. 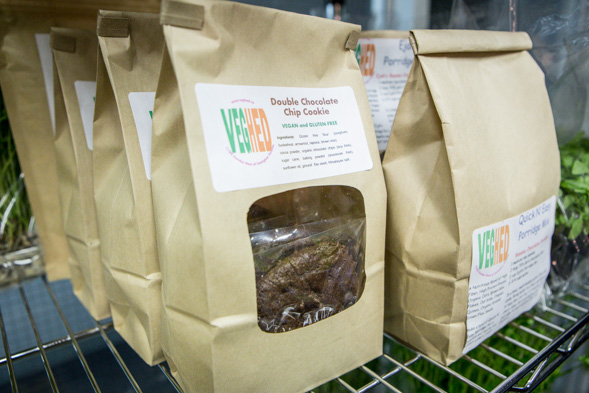 The double chocolate fudge brownies ($3) are sweetened with sugar cane and are made with gluten-free flour, organic chocolate chips and ground flax seed, and don't taste like they're vegan at all. Neither does the Mayan hot chocolate ($5/$6), which is made with an enticing mix of Mexican cocoa, Nepali chai spices, cane juice and Himalayan salt. This stuff is addictive. 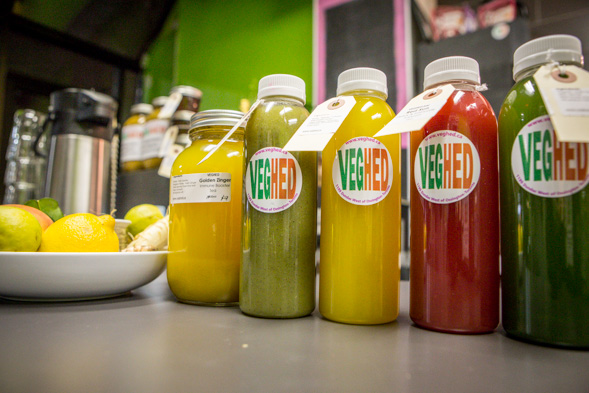 Some of the most popular items at Veghed so far have been the fresh juices and made-to-order smoothies. The Golden Zinger ($5), with fresh turmeric, ginger, apple, wildflower honey and Himalayan salt, is a potent concoction that can ward off colds (and those nasty viruses are def getting around this season). 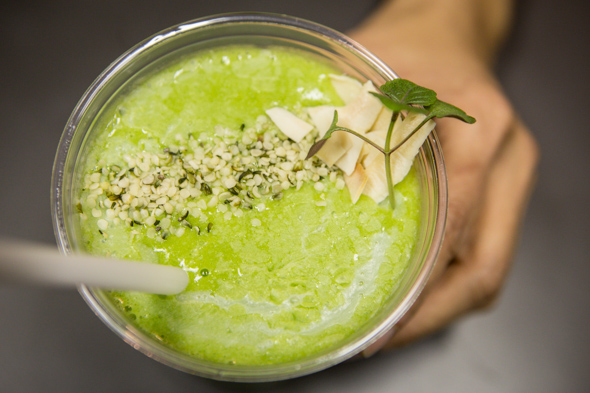 Another fave is the Green Beach smoothie ($7), a nutrient-rich blend of pineapple, kale, banana, coconut oil, shiso basil, coconut flakes and hemp hearts. Like everything else, its presentation is artful. 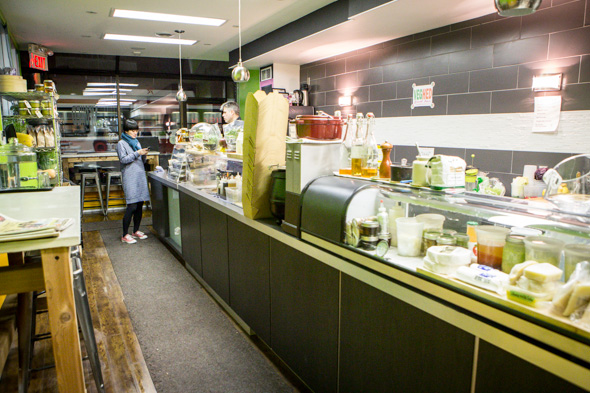 Both Mercer and Magbanua are do-gooders (Magbanua has a background in nursing with a focus on street youth and victims of human trafficking). Their long-term goal for Veghed is to help fund child-based safety and outreach projects in Toronto (like the Canadian Music Therapy Trust Fund ) and abroad (the Community Learning Centre for the Development of Humanity in Bangkok, where both Mercer and Magbanua have worked). So you'll not only feel good about what you're eating here, but also about where your money's going. 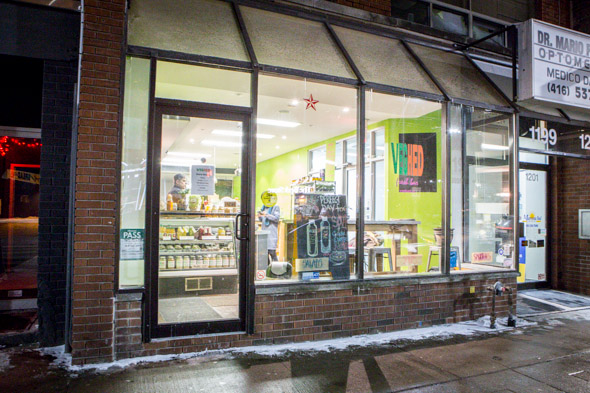