After a year of renovating, Union on Ossington has finally opened its doors. The chef behind the restaurant is a lad named Teo Paul, a Toronto native, who spent years in Europe but found much of his inspiration in country Ontario.

To understand what Chef Teo is attempting to accomplish at Union, you first have to take a look at his transcontinental resume. For several years, in fact, I followed Chef Teo's feasts across continents. And for good reason. He's like an alchemist in the kitchen, transforming farm fresh produce into something harmonious and exquisite on the plate.

After years as a chef in a Paris restaurant, he began pursuing his high art in the comfort of people's homes.

"The only way to deliver food in all its culinary glory is to make it on site, in the moment", says Chef Teo.

In 2007, while spending time with him in Paris at the world's largest food market, Rungis, I saw first hand his tactile love of earthly things. He spent most of his time sniffing and sampling the farmers' produce. 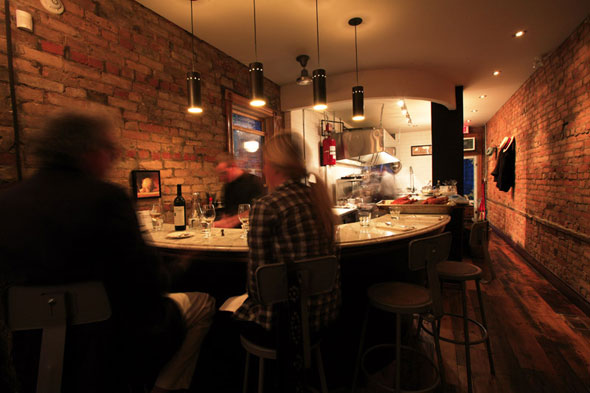 "There's something about being around fresh vegetables that lifts the spirits", he said, handing me some greens to taste. His enthusiasm was contagious.

For Chef Teo, markets have always tuned him into what's available locally and regionally at any given time. He comes upon his philosophy of freshness honestly. At 22, he worked with famed chef, Michael Statlander, at his farm-restaurant north of Toronto.

With Statlander, Chef Teo spent his time picking vegetables from the garden, cleaning poultry, and prepping in the kitchen. He had worked in restaurants before, but Statlander brought food back to its roots in the earth.

Watching Chef Teo work at his family's farm in northern Ontario, grilling fresh tuna over an open fire, tending the vegetable plot, and smoking everything from quail to frog in the smoke house that he built, it's clear he has a deep affinity with the land.

His near silence while cooking speaks volumes about the natural intensity he infuses into his craft. 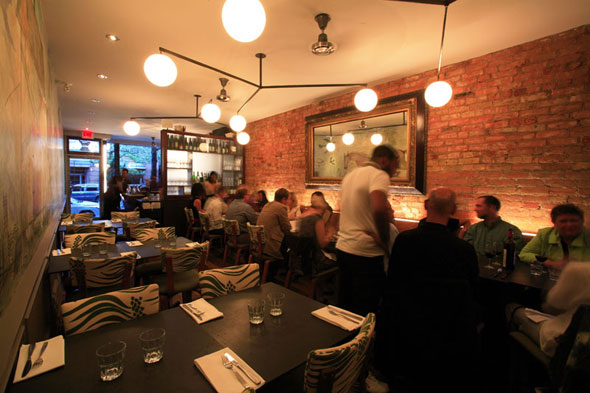 To glimpse Chef Teo's inspiration for Union's welcoming space, one must wander down the narrow streets of Rue de Temple in Paris to find Le Petit Fer A Cheval. This cafe with its horseshoe shaped bar was his favourite haunt while living in Paris. And so it is that a little bit of Paris has been brought to Ossington.

Now on with the food....Chef Teo's philosophy in the kitchen is straight forward. "Simplicity. If it's too complicated, you can't cook your way through it", he says, as if ingredients are an elixir revealing culinary gold on the plate.

Union's menu includes savoury elk sliders, roast chicken, fresh fish, beef for two, and a vegetarian option, a handmade lasagna. The crispy French fries are to die for and are served with mayo. And what better way to cap off the night than to devour a generous portion of bread pudding topped with homemade basil ice cream?

With an evolving wine list, sommelier Christopher Sealy's food-focused wines include local wonders, as well as old world and new world classics. "We want to create a space for everyone to enjoy our selections without breaking the bank", says Sealy. 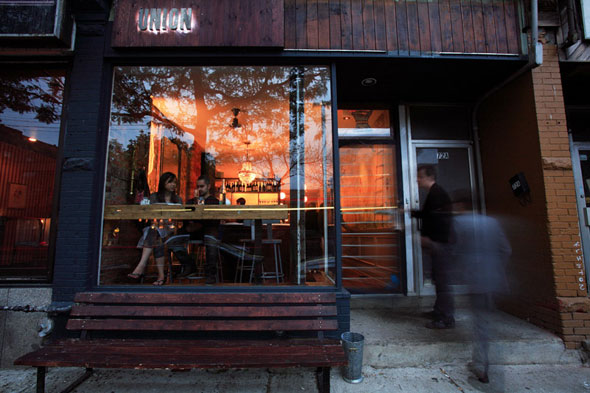 It should be noted that Union is more than a dinner hotspot (Coldplay ate here during their Toronto stay). The restaurant opens at 9am with coffee and croissants on offer. At noon, table and bar-side lunches can be enjoyed with bistro classics like steak frites and chicken pot pie.

Thankfully, Chef Teo and his dedicated staff have finally settled down in Toronto. It'll save foodies like me a ton on transcontinental airfare.