Top Silog is where to go in Toronto for an all-day Filipino breakfast with options like lechon, beef, fried spam, hot dogs, sausage and fish all served on the side of fried eggs and rice.

Just north of the Bathurst and Wilson intersection in Little Manila, Top Silog adds yet another reason to visit Toronto's hub for Filipino food and culture already home to the likes of Sampaguita Village, Wilson's Haus of Lechon and Jollytops. 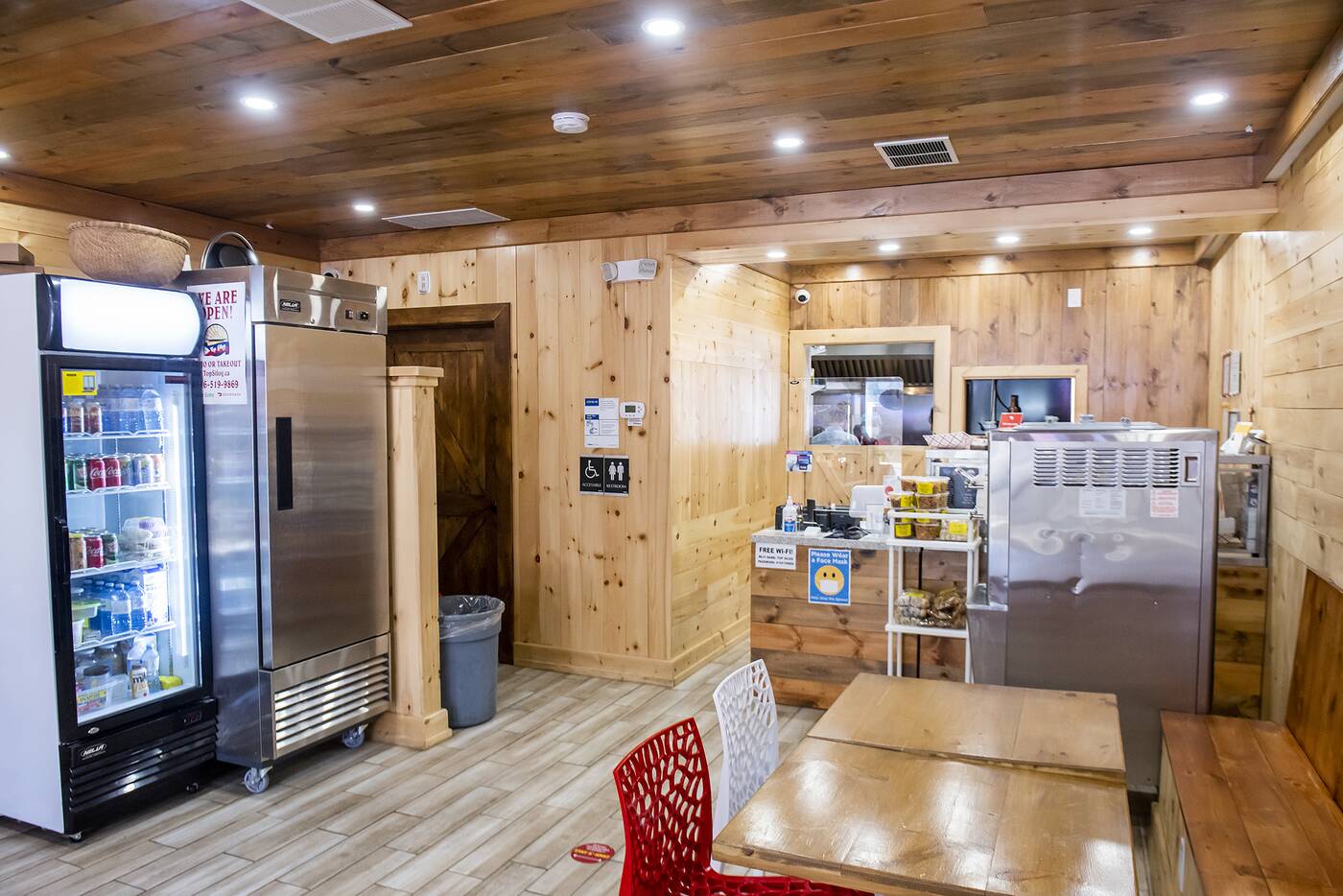 The all-wood interiors house a few tables with a front patio offering more seating for those who walk into the family restaurant after a silog feast any time of the day. 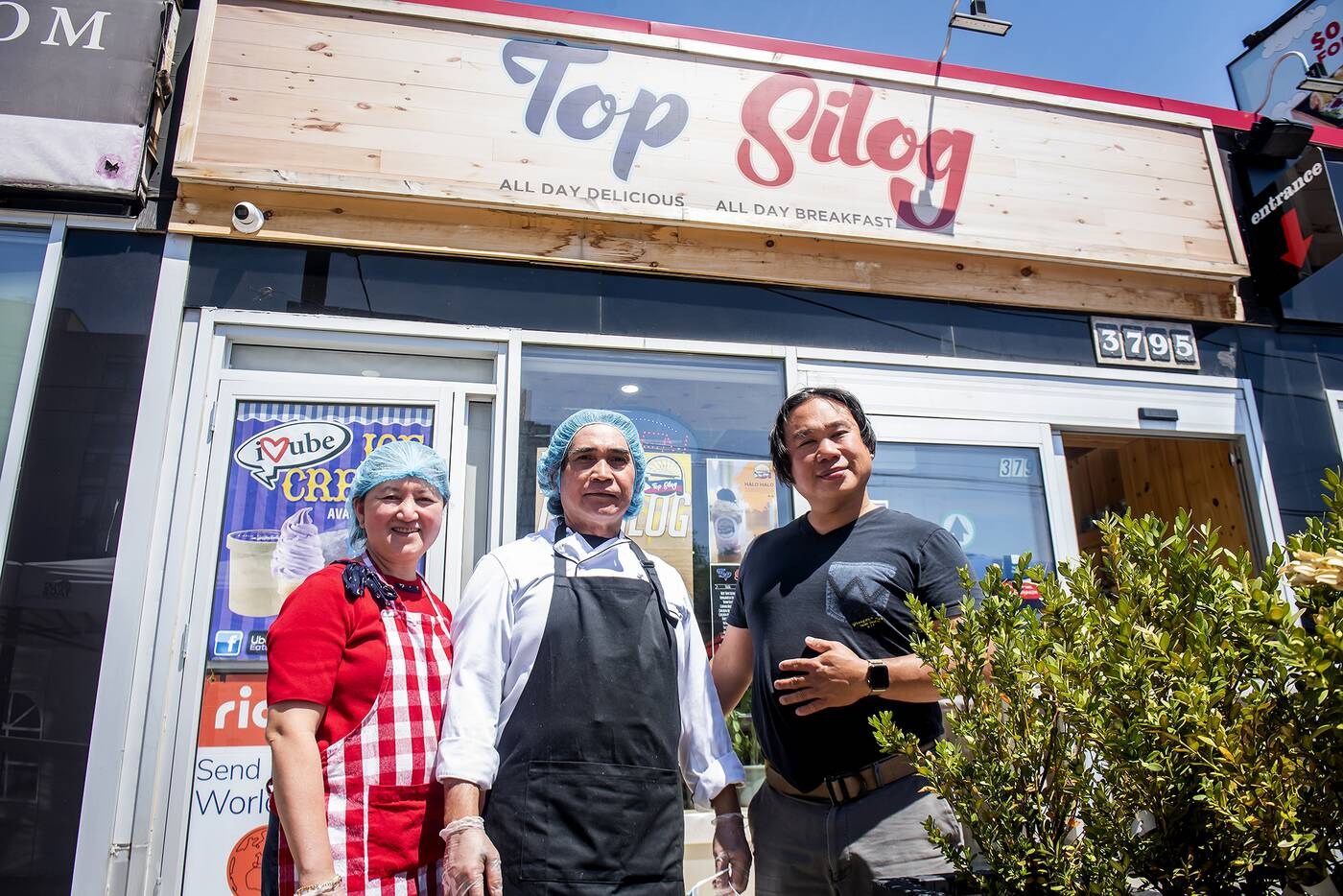 The spot is run by Resty Dellosa and his wife, Solita, along with their nephew Aldaine Chia, with the menu a combination of old family recipes and longtime favourites from back home perfected by Chef Joseph Paule. 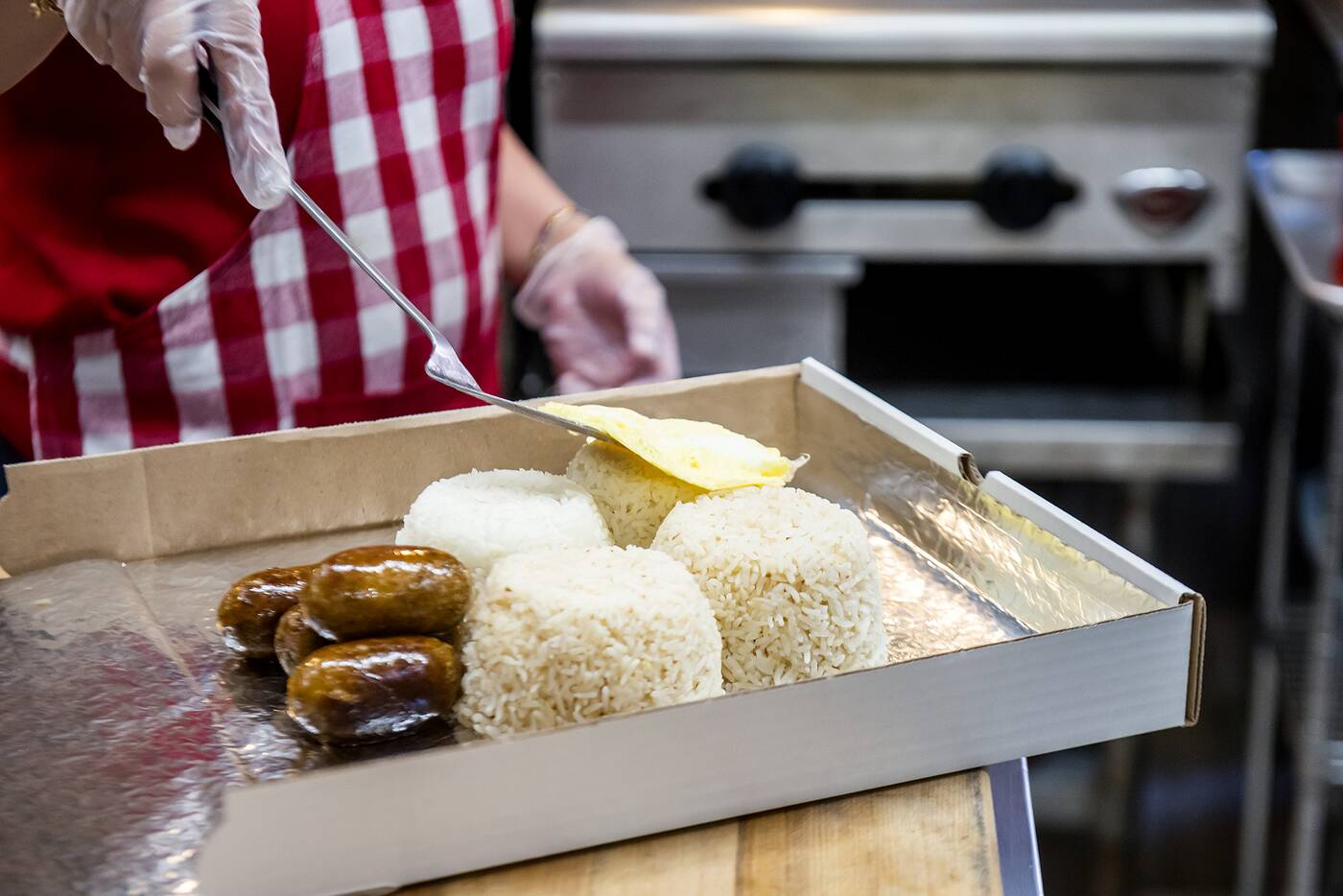 Each of the breakfasts comes with your choice of garlic or plain fried rice and eggs prepared sunny side up, unless specified, in true silog fashion. The box silog ($29.98) will get you four proteins of your choice on the side, so it's best to eat with at least two or three others. 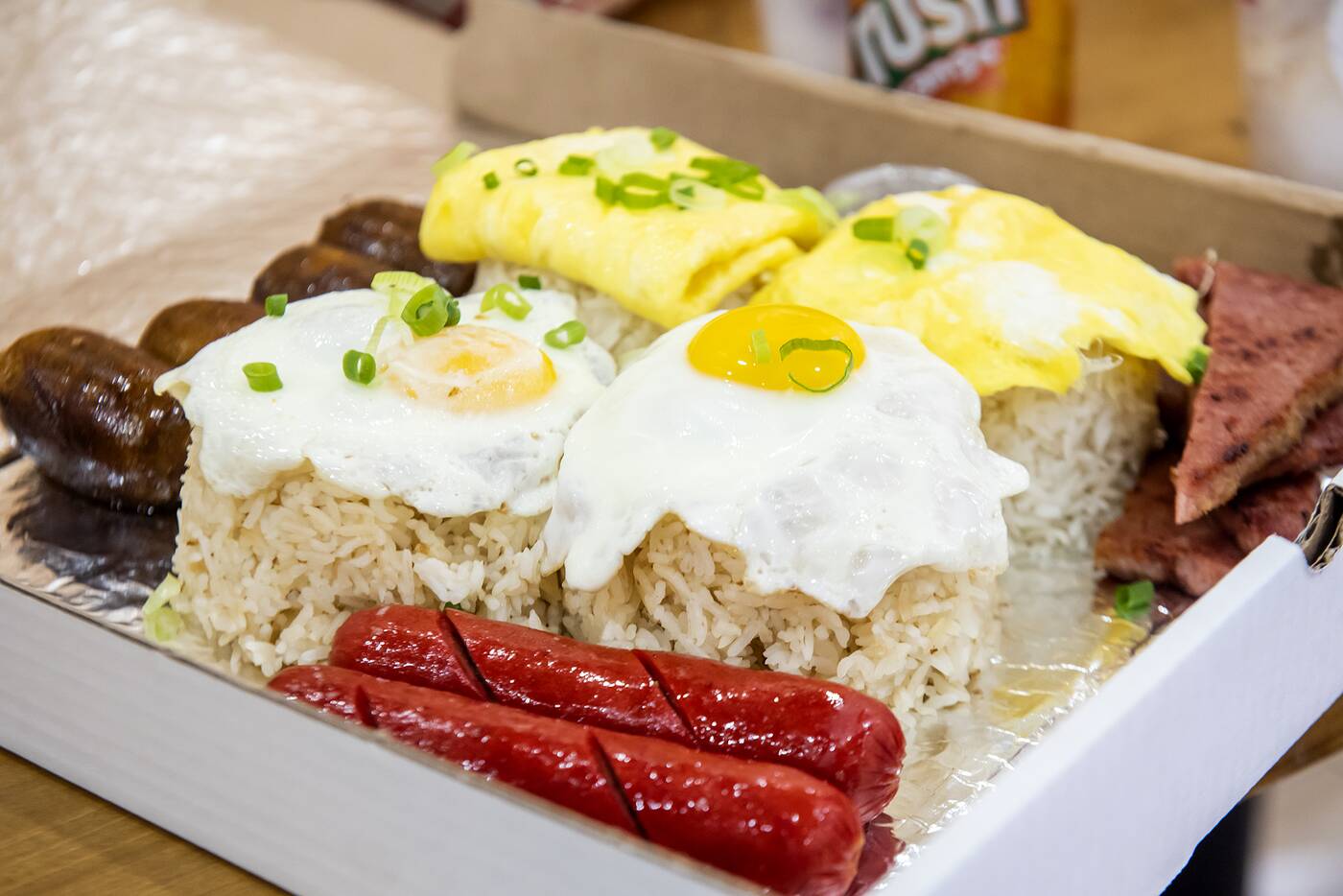 We go for the housemade sausage, Filipino hot dogs (a popular Pinoy breakfast option among the younger crowd), Lichon, a few slices of Spam, and atchara from the Dellosa's grandmother's recipe. Think of the pickled unripe papaya as the Philippines' version of kimchi. 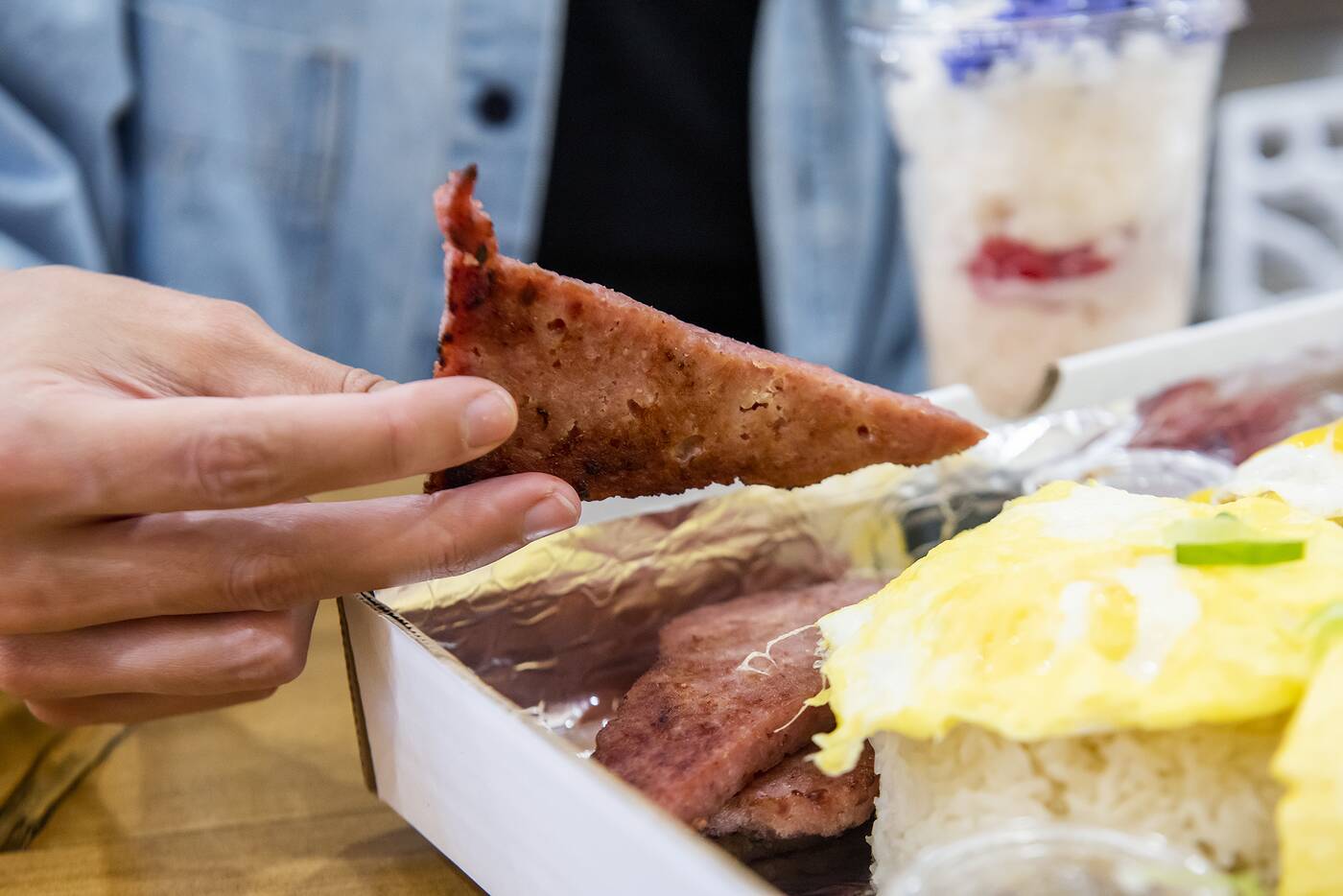 Although seemingly a bit out of place, Spam has been a firm staple in Filipino food ever since WW2 when it was introduced by U.S. military troops stationed in the Philippines who used to live off the American canned meat.

They make it themselves here with a blend of pork shoulder, potato starch, water, sugar, salt and sodium nitrate. 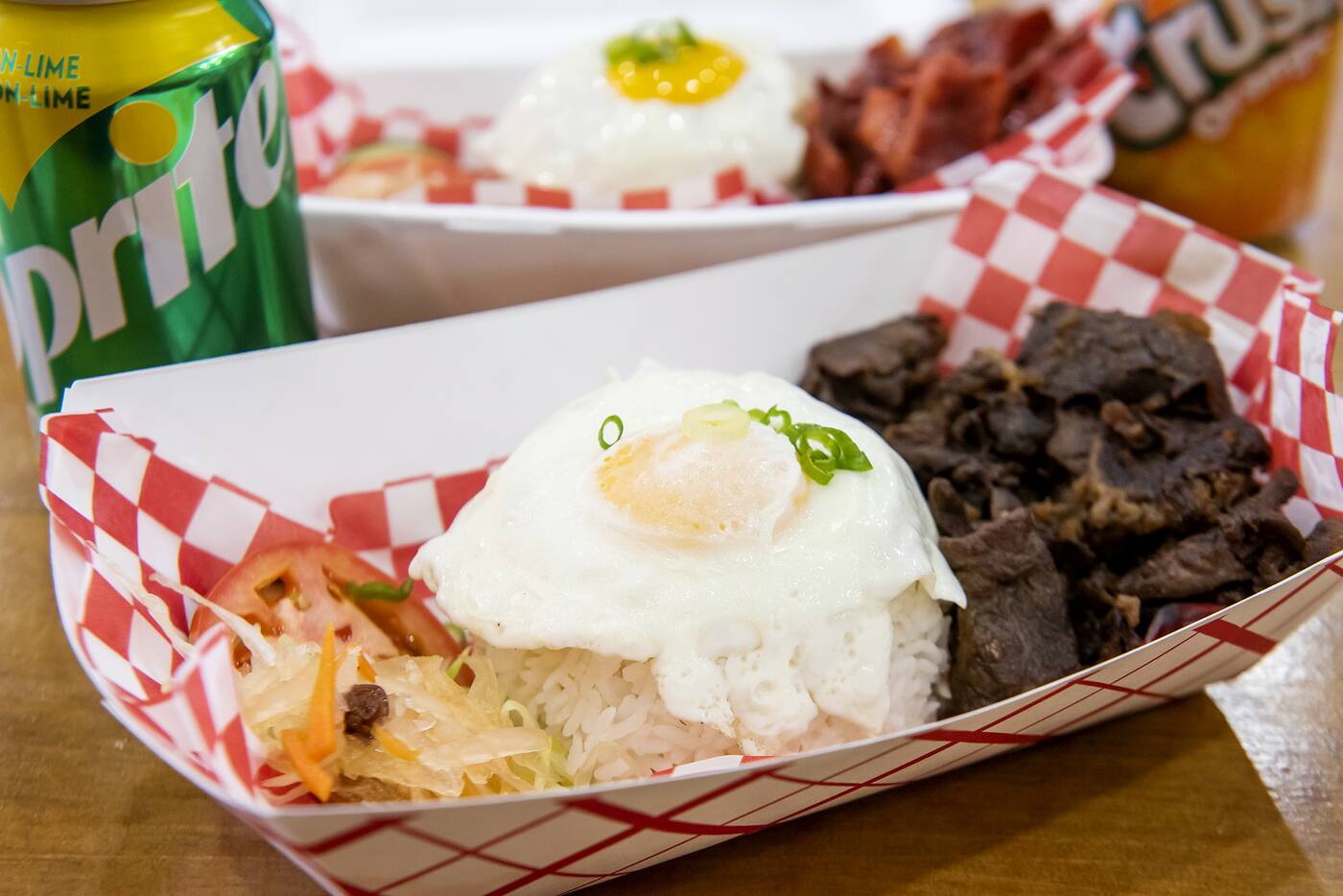 There are also individual meal options like the tapsilog ($11.99), which comes with strips of dry-cured beef that marinates in a sauce of vinegar and soy for a day or two before sauteing. 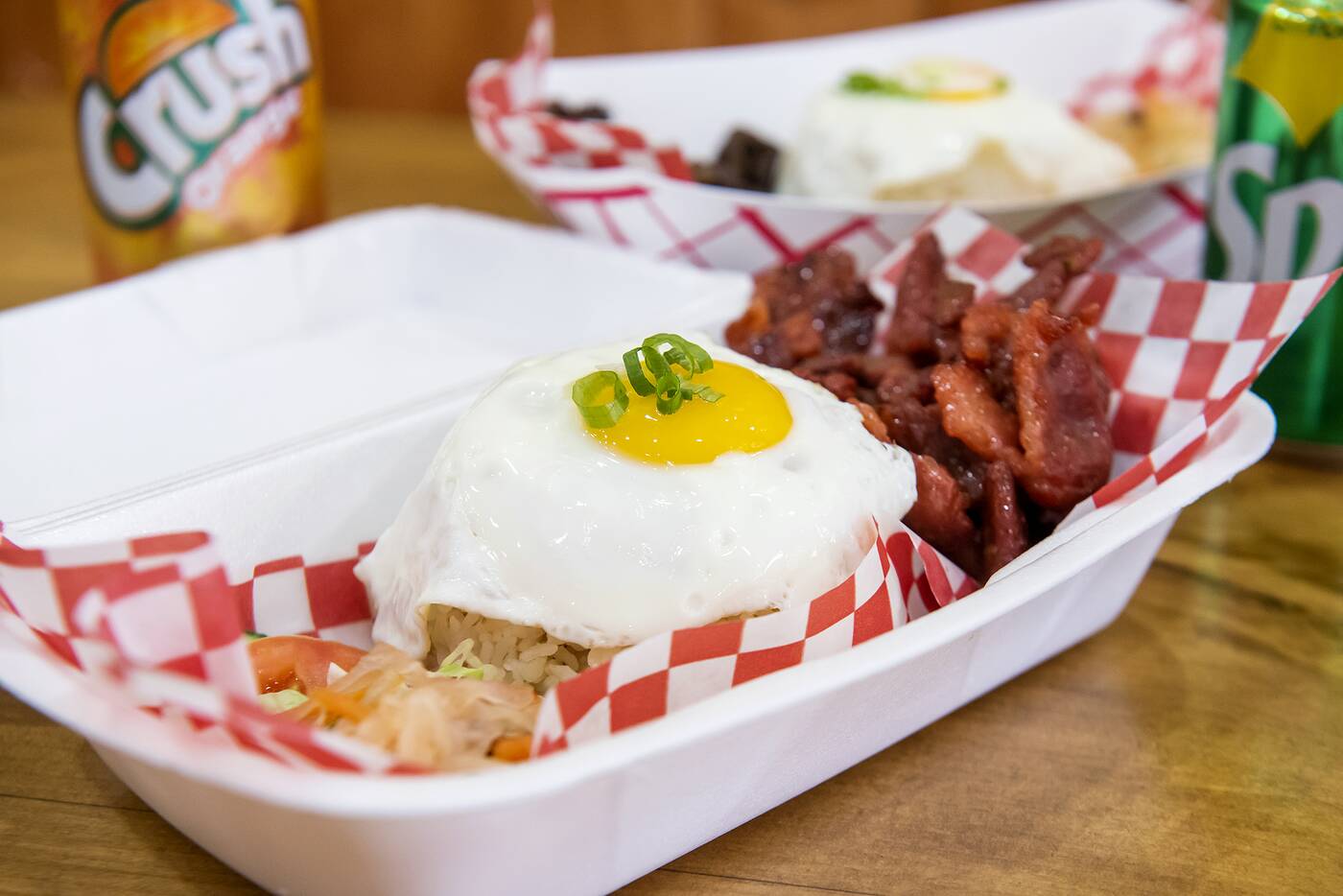 One of the variations of tapsilog is tocilog ($10.99) which swaps house-cured pork out for the beef. It marinates for a similar amount of time in a simple mix of sugar, garlic, salt and pepper. 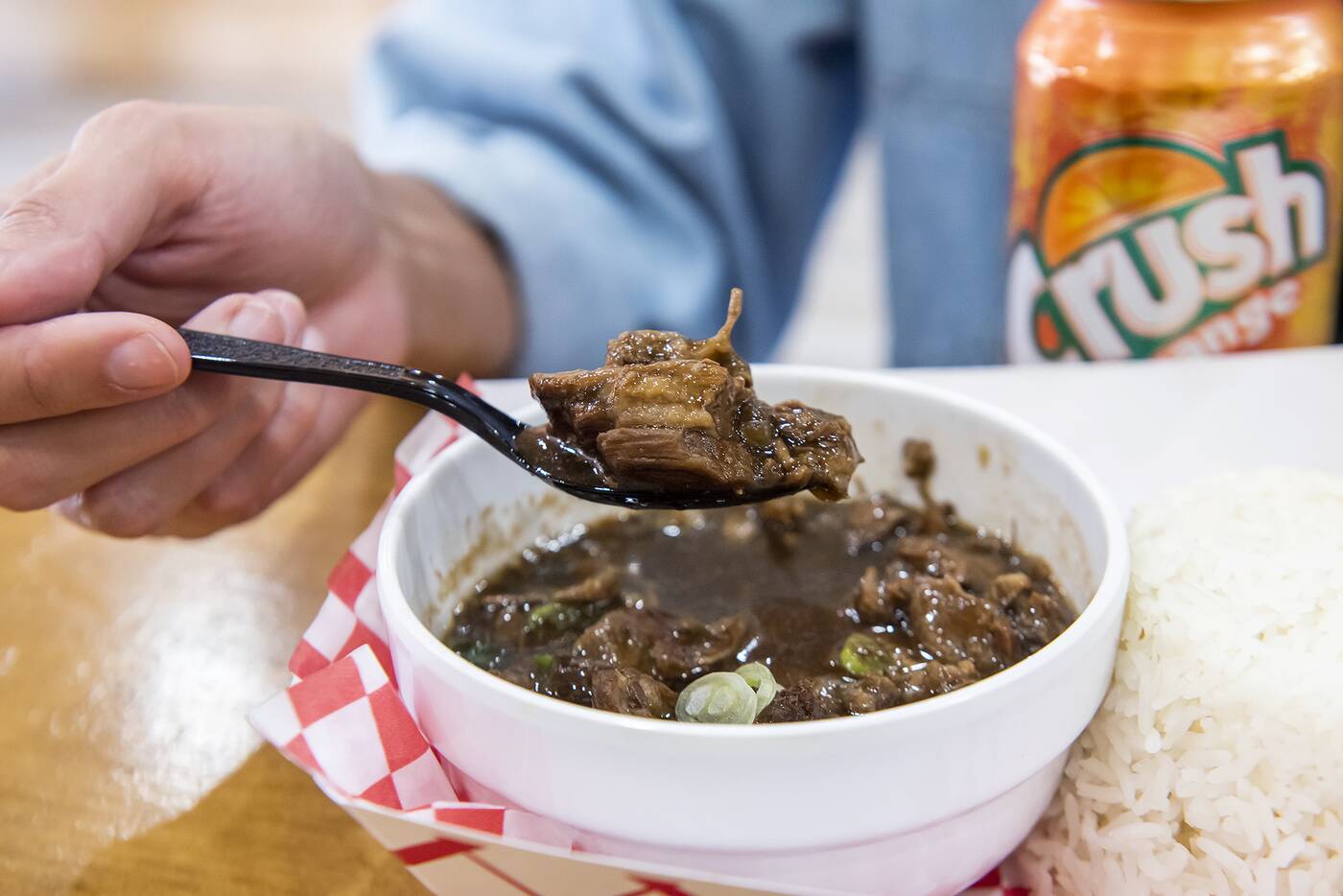 Beef pares ($11.99) is another Filipino favourite. Cooked slowly, the cubes of beef are extremely tender in this soup of different spices and sauces mostly consisting of garlic and soy. The aromatic flavour is the perfect match for the garlic fried rice. 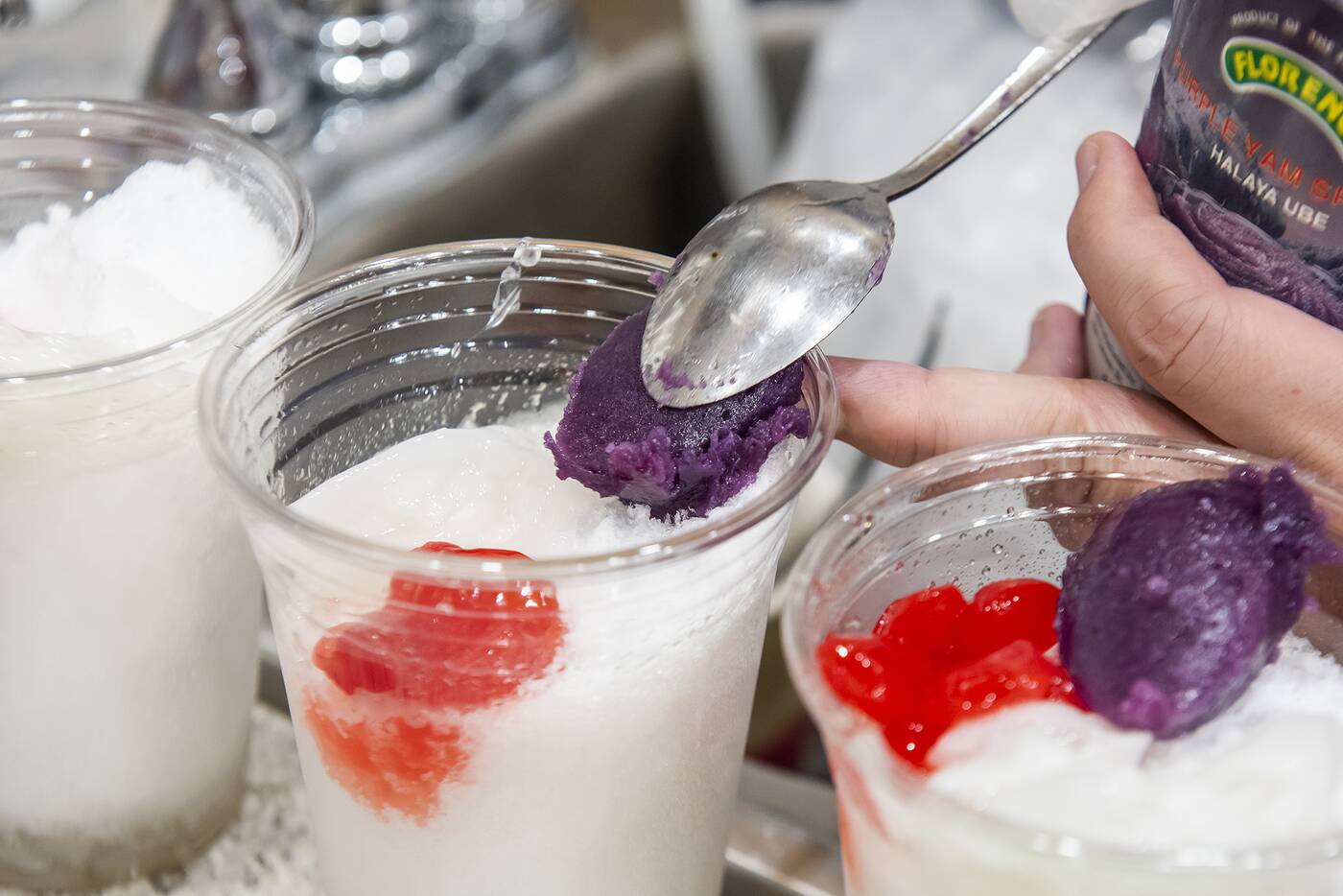 A cup of halo-halo ($6.98) doubles as a drink and dessert on the side of breakfast. Often referred to as the Filipino version of bubble tea, how the sweet beverage is prepared tends to vary on the place. 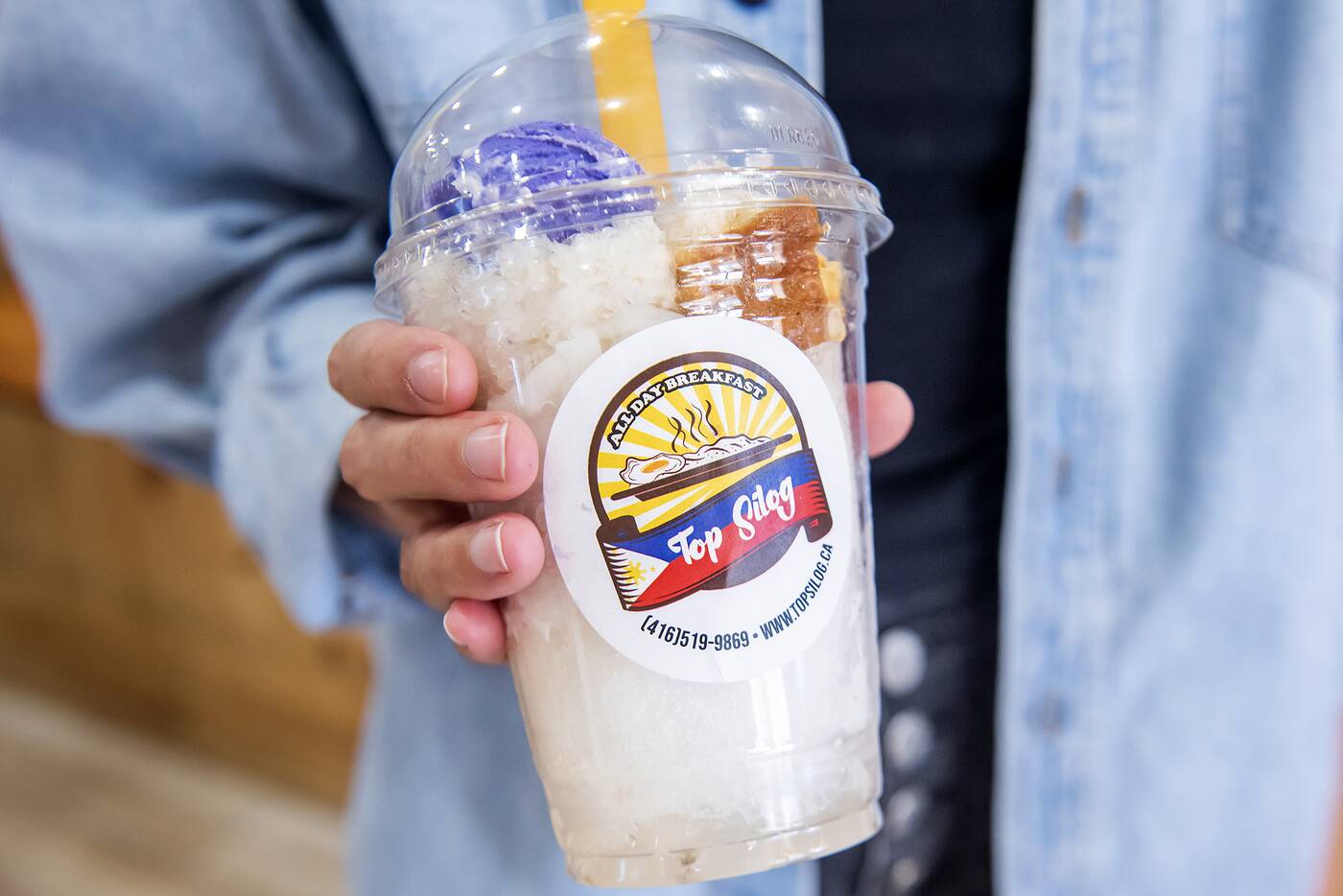 Top Silog does up theirs with a cup of crushed ice topped with a combo of sweet coconut, palm nut and Leche flan jelly, yam ice cream, and plenty of condensed milk. 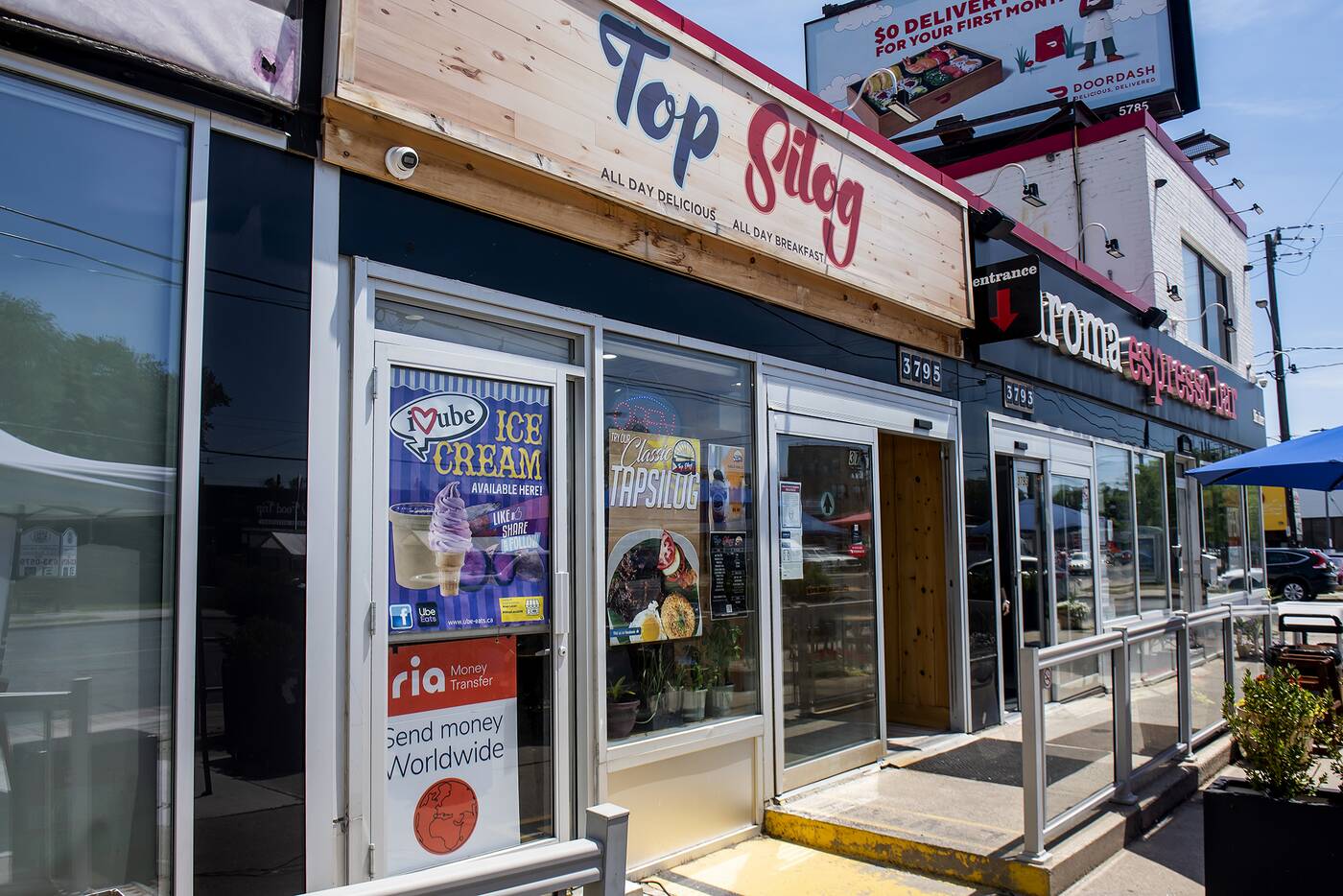