Tacos Baos brings together the flavours of Mexico, Asia, the Philippines and the west coast in the form of, obviously, tacos and baos as well as fries and rice bowls.

It all started with the Mundo brothers’ search for the pastor tacos they had eaten on the west coast in small Vegas taco shops. Once they fed their own perfected version to friends and family the recipe became something everyone wanted. 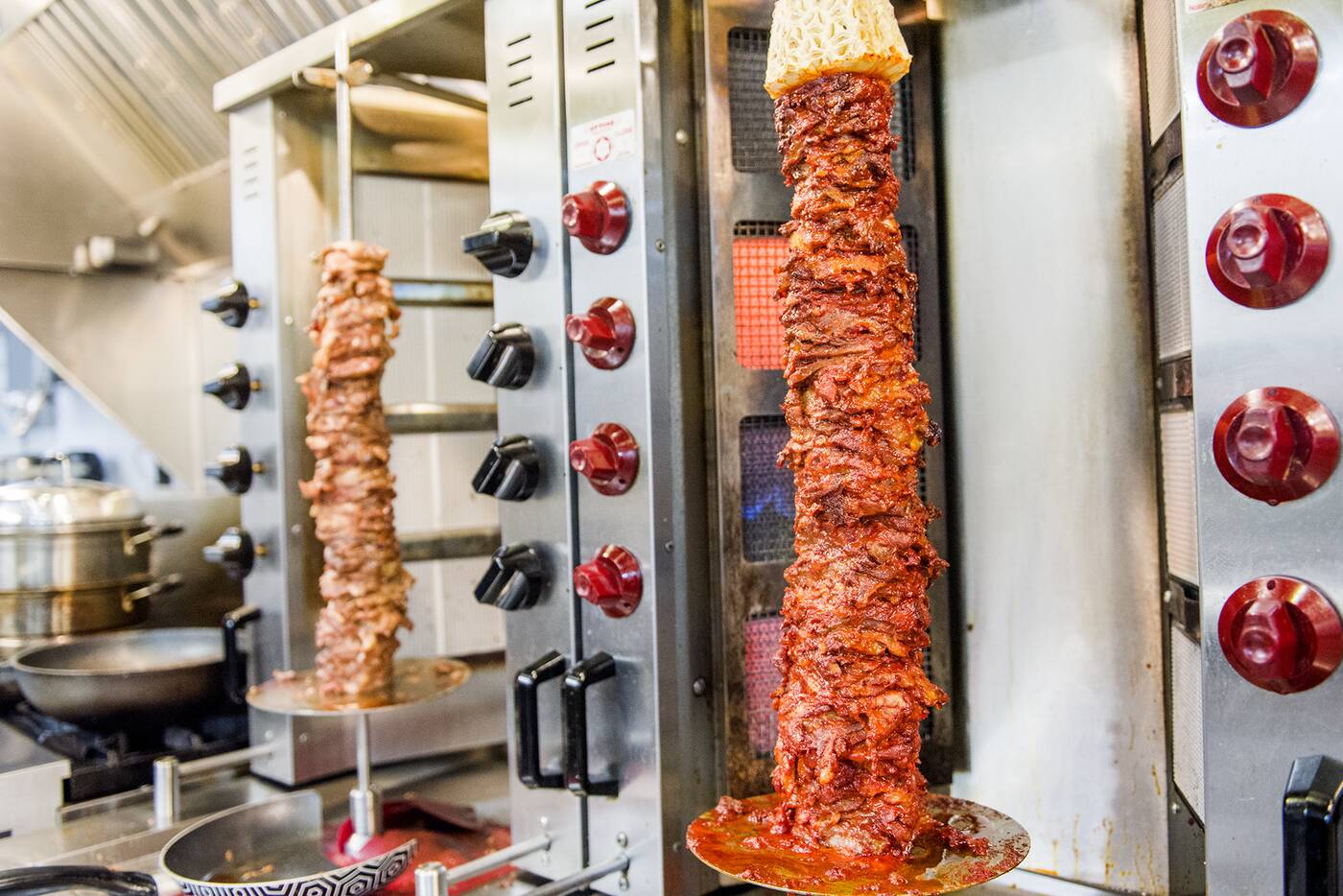 For the Pork Al Pastor tacos ($2.75), they landed on a day-long marinade of four different smoked peppers. 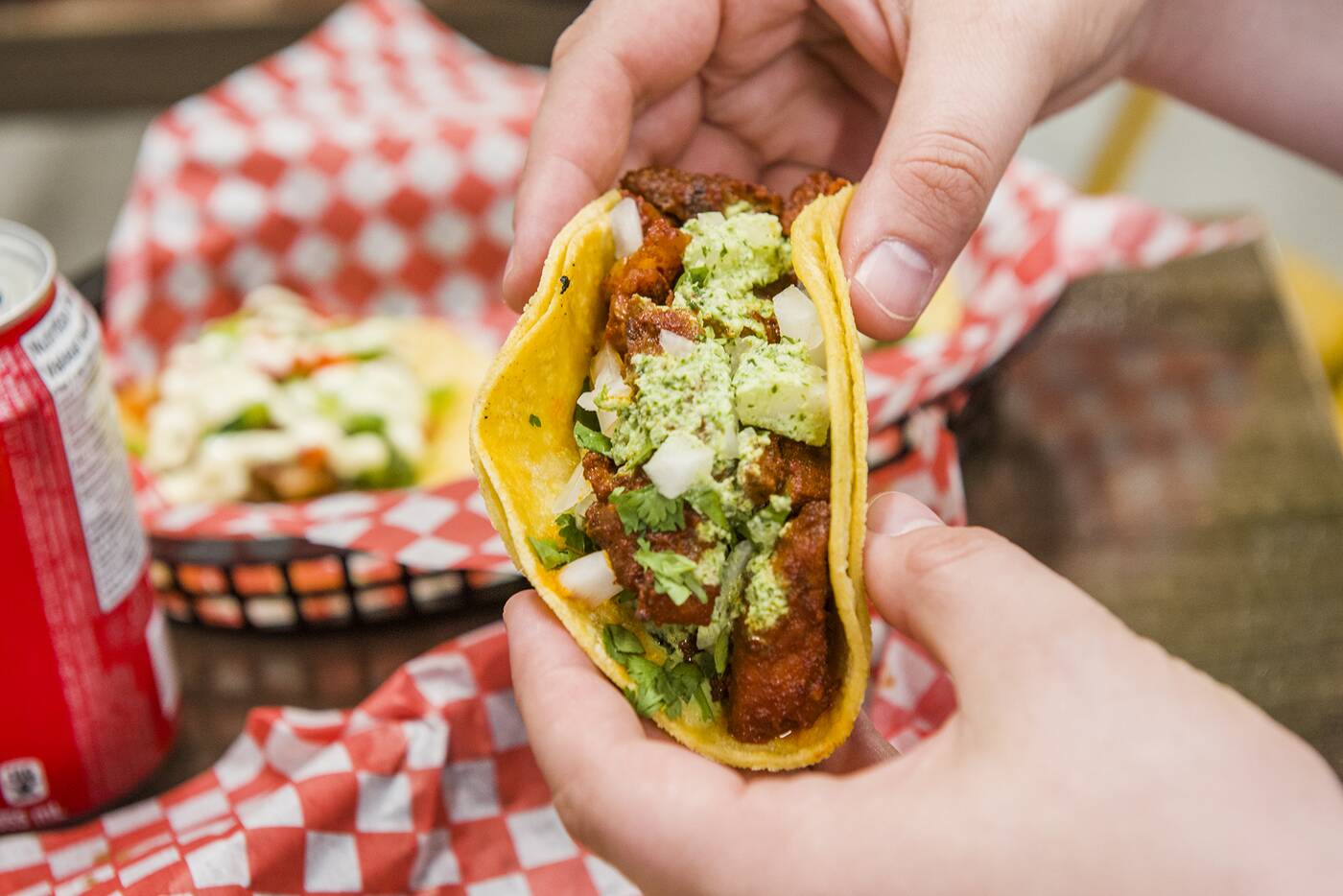 Most pastor tacos are garnished simply with onion and cilantro, but here they also come with a unique creamy green cilantro-jalapeno sauce. All tacos come on corn tortillas brought in from outside, doubled up to hold everything securely, served with wedges of lime. 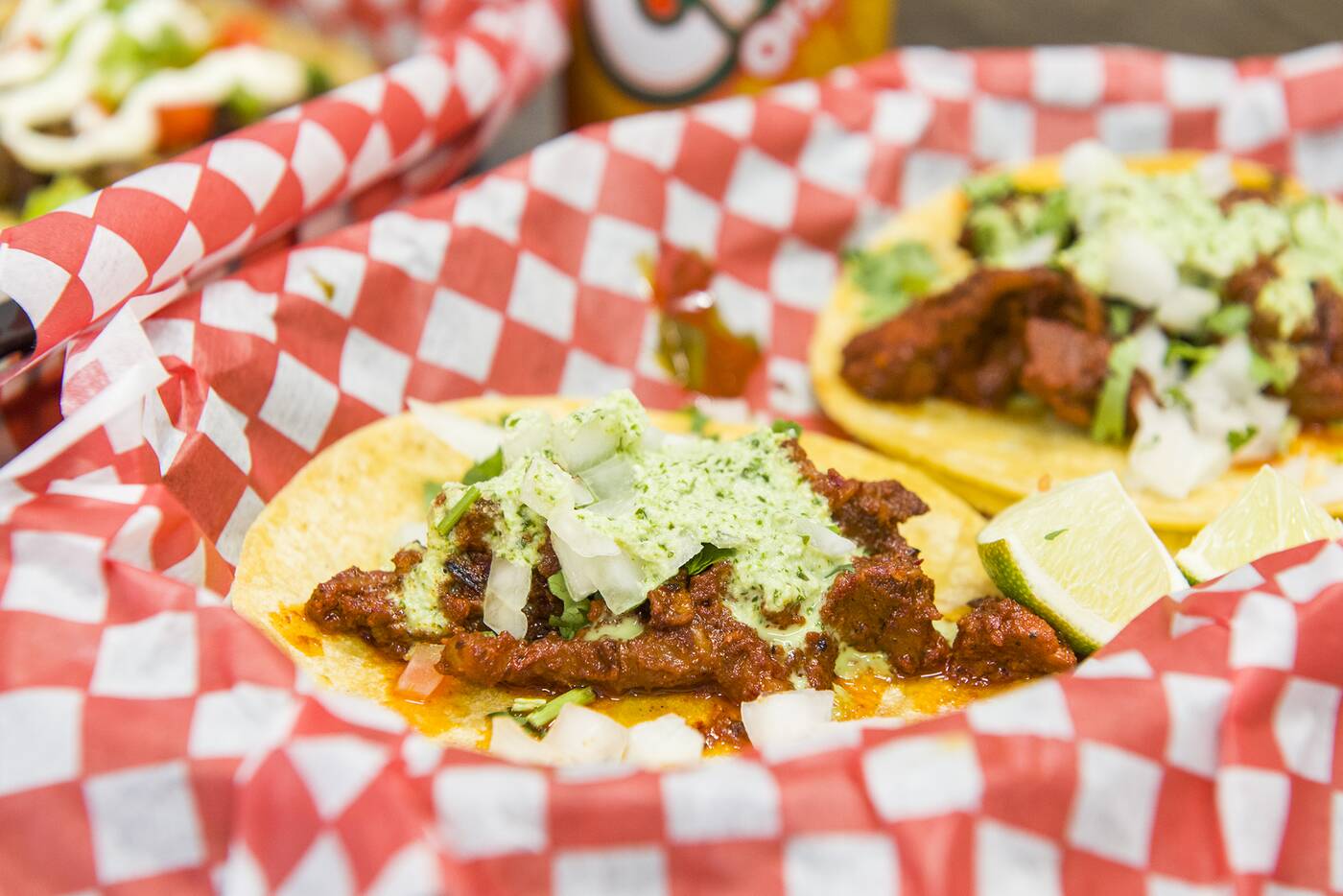 The herby sauce with a bit of a kick makes this pastor taco a little different, and since I’m a sucker for pineapple I have to have some on the side to add to my preference (way too much). 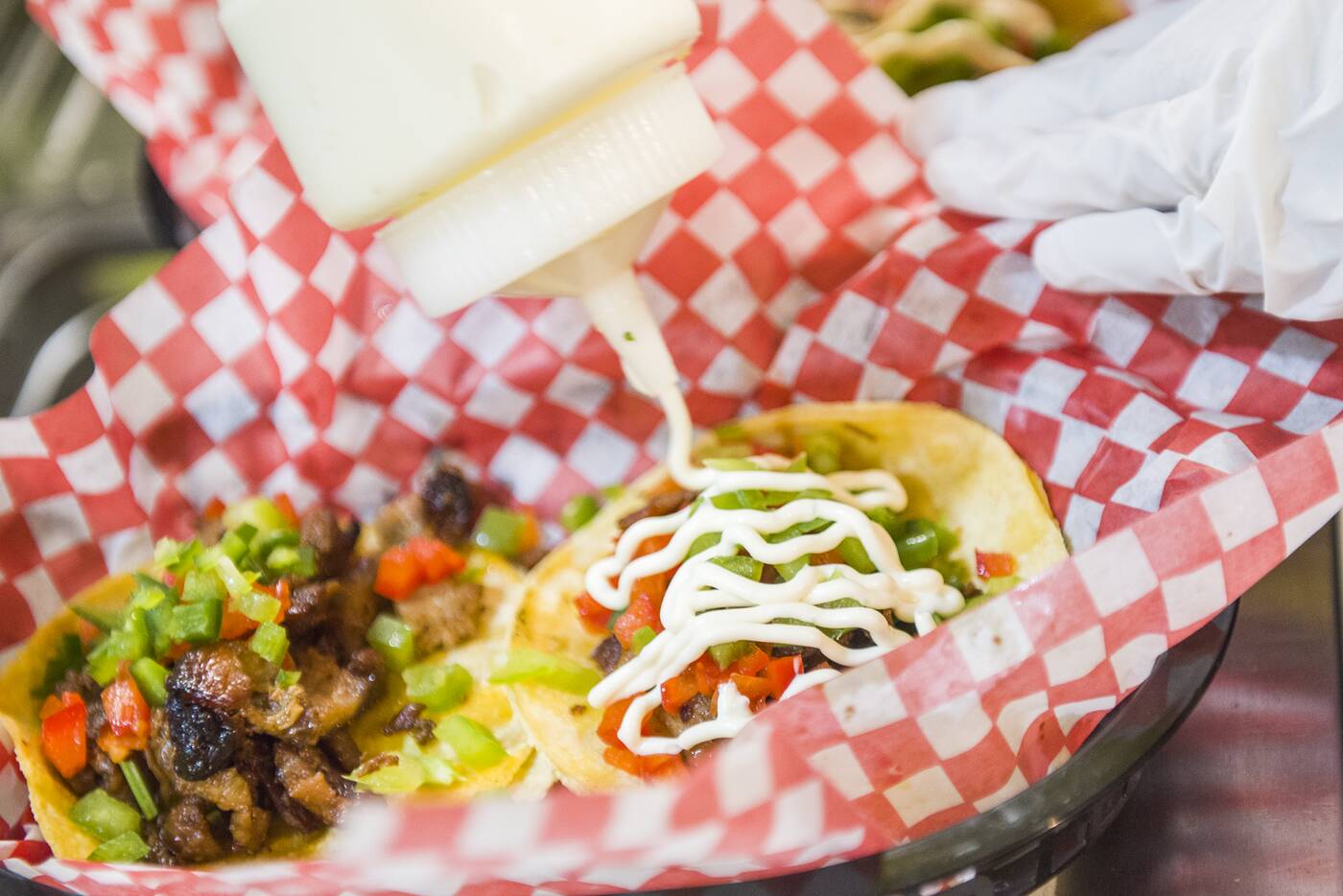 Pork Sisig tacos ($3) see pork shoulder that’s been marinated in lemongrass and soy and then flash fried with chili and lime garnished with jalapeno and mayo. 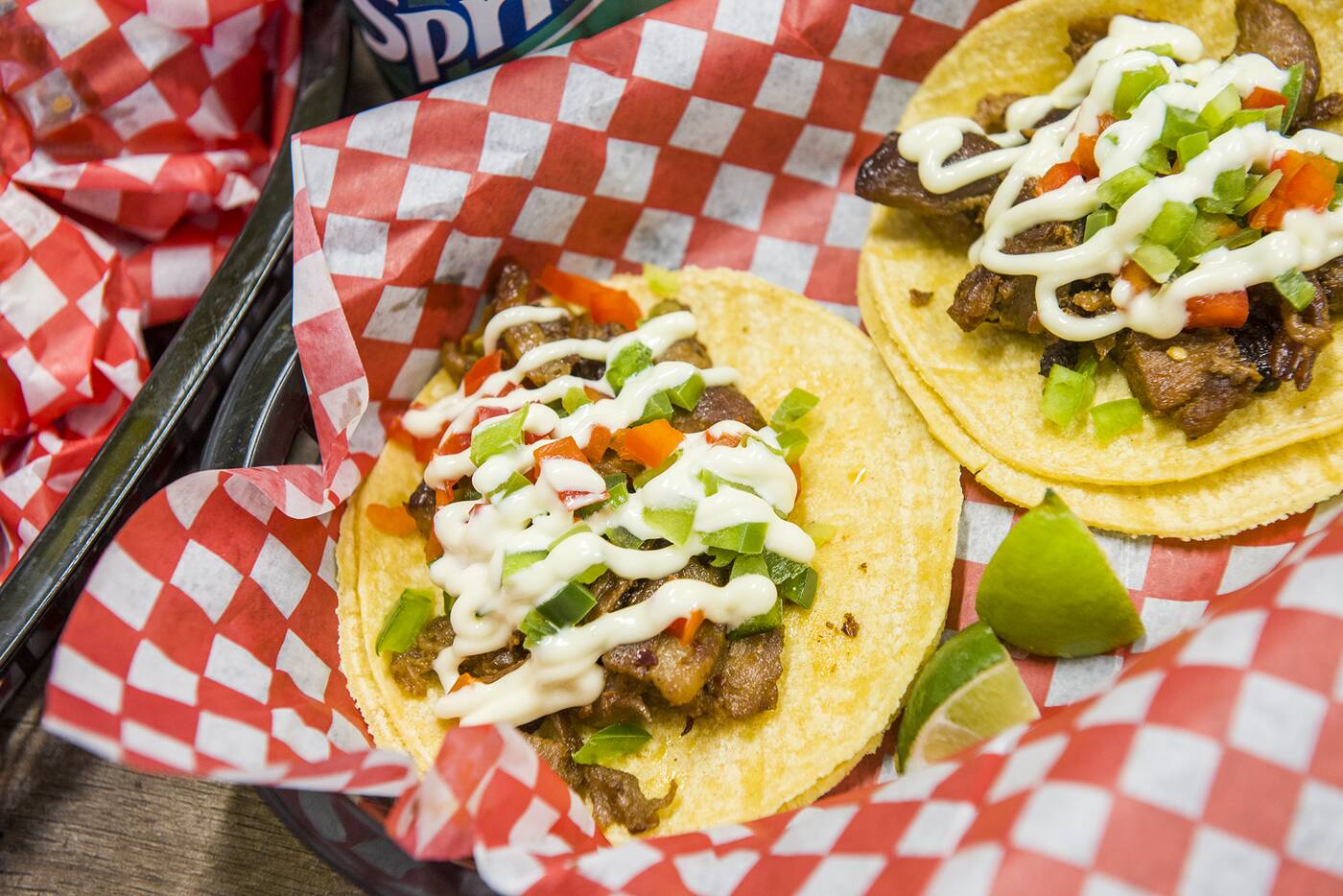 Red and green peppers diced up small balance out the rich crispy meat with a fresh crunch, the mayo providing creaminess. 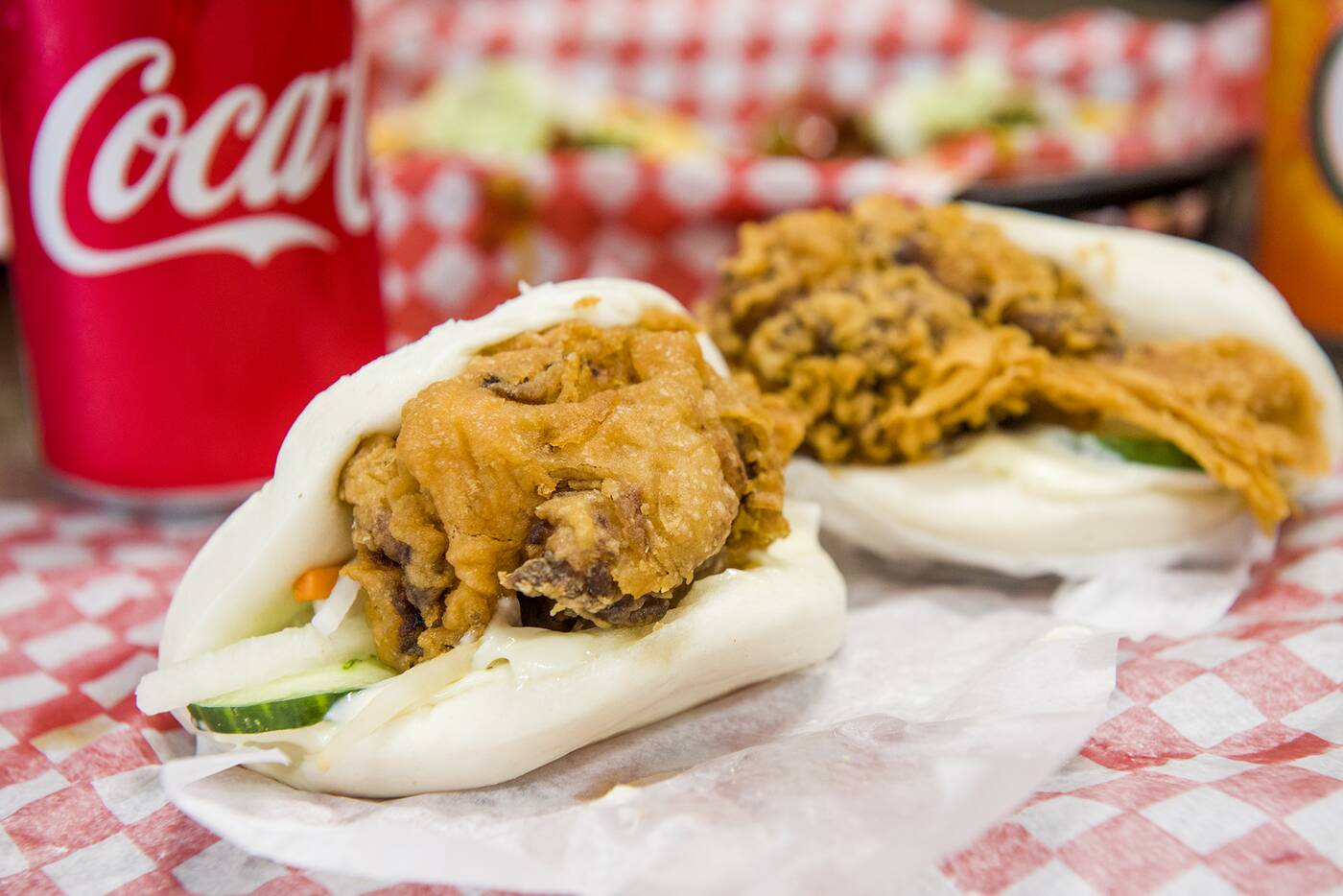 The Sekky Fried Chicken Bao ($4.50) is a star, fusing together multiple flavours and cultures with major texture contrast between crunchy, juicy soy ginger marinated dark meat and the soft steamed bao (also brought in from outside). 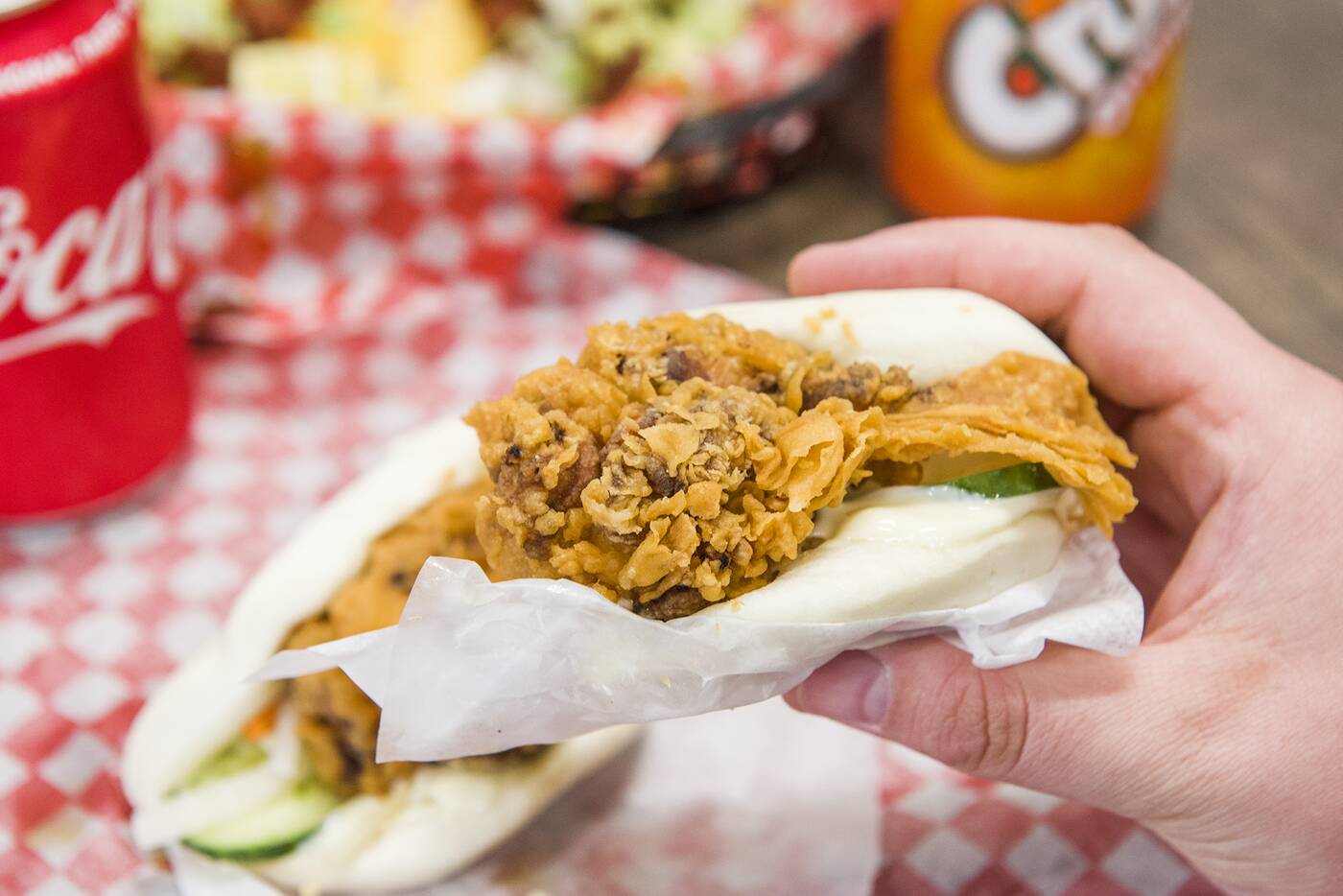 Topped with cucumber, pickled carrots, daikon and a bit of mayo that holds everything together, the name is shortened from sekkyokuteki (which appropriately means “aggressive”). 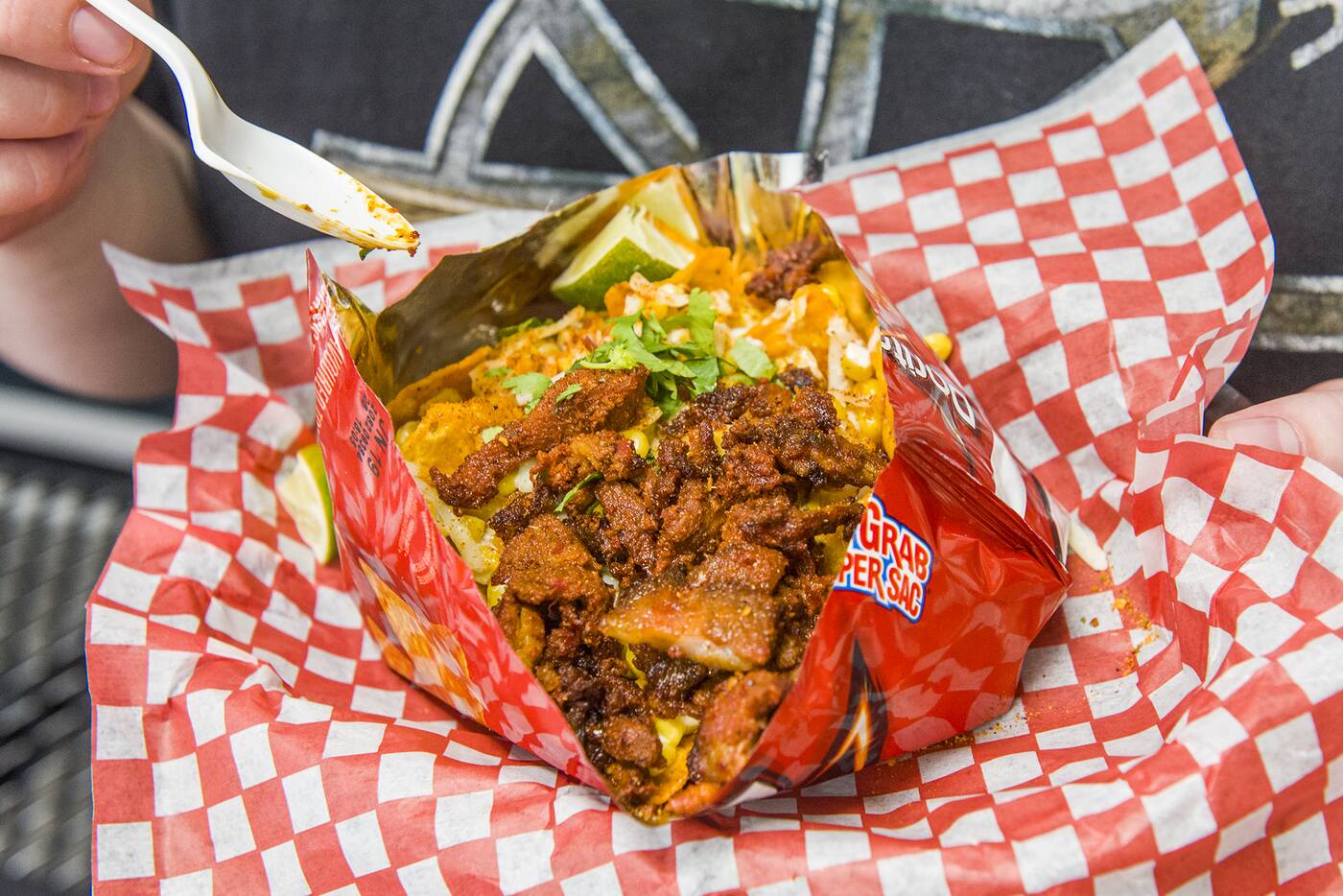 Chips Elote’d ($5.95) come with your choice of pork or chicken pastor style, a bag of Doritos opened lengthwise with corn, cheese, sriracha, lime and elote spice.

It’s everything but the kitchen sink, but it’s crunchy and spicy, the cheese melty, the corn true to the flavour elotes, Mexican street corn on the cob. 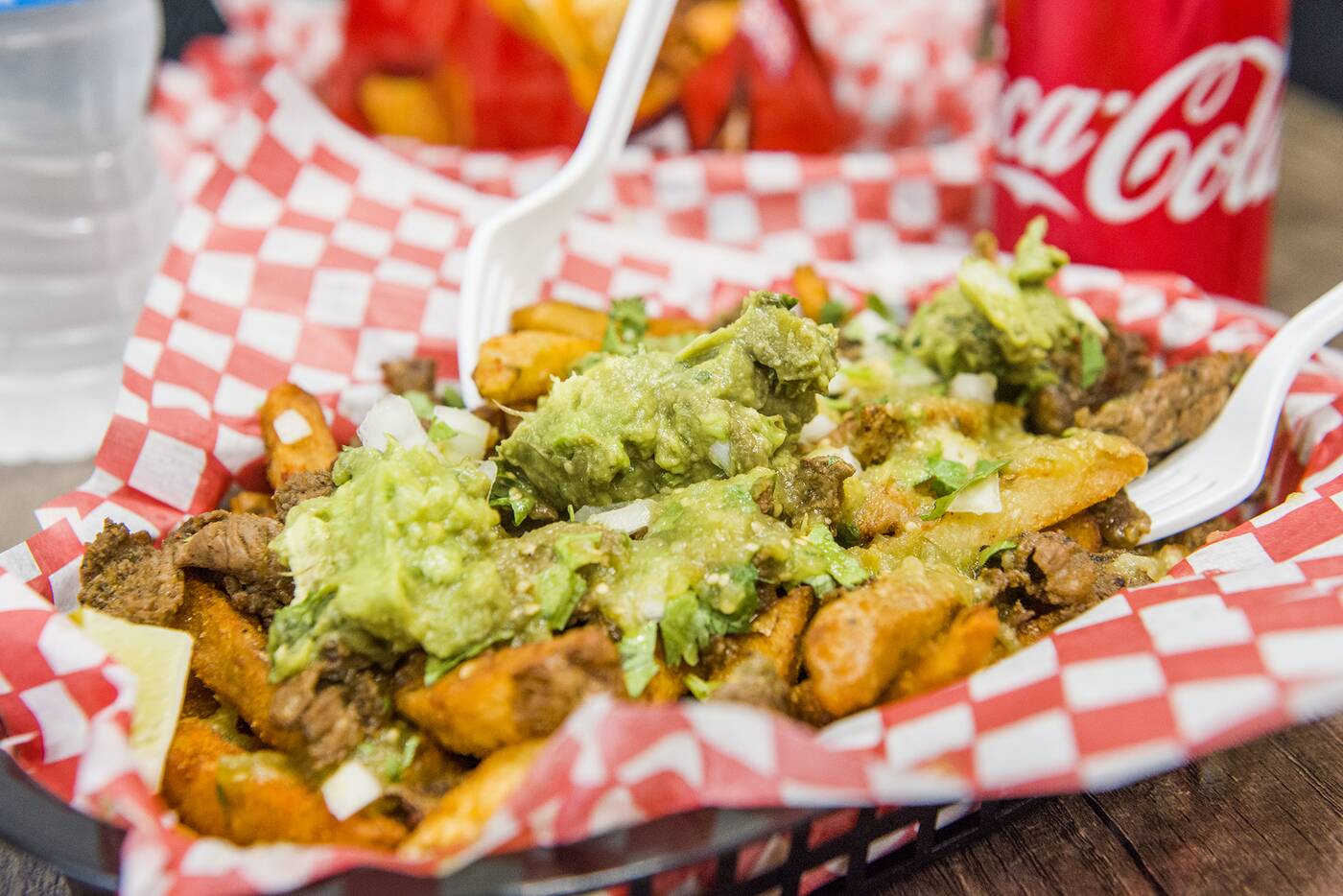 Steak Asada fries ($8.50) come with house made guac and salsa verde that sort of combine into one spicy, chunky green sauce, onion, cilantro, and a generous portion of steak. 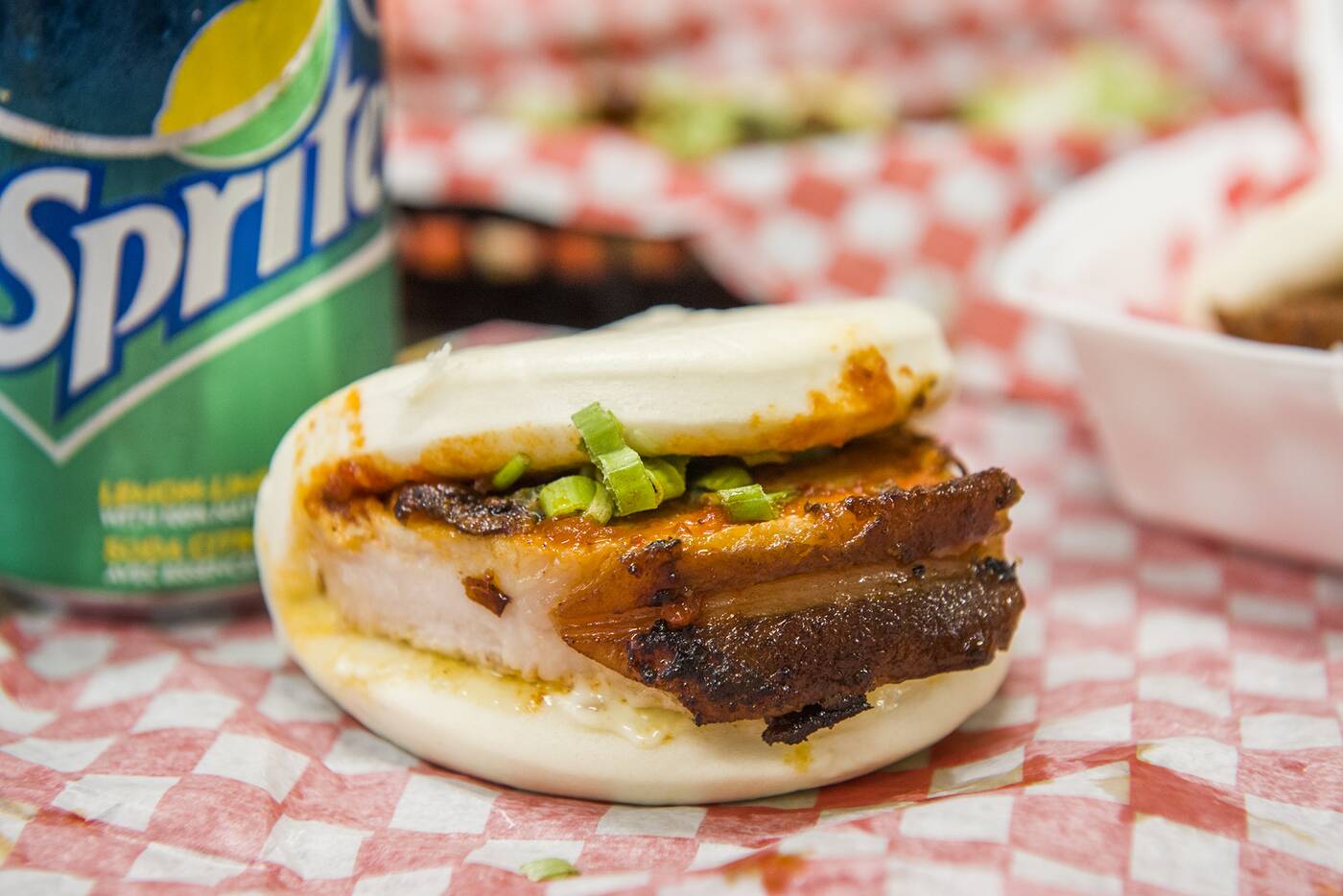 A Pork Adobo bao sees the fluffy bun stuffed with a thick slice of pork that’s crispy on the outside and fatty on the inside, smothered in a chipotle sauce and finished off with just a little mayo and scallion. 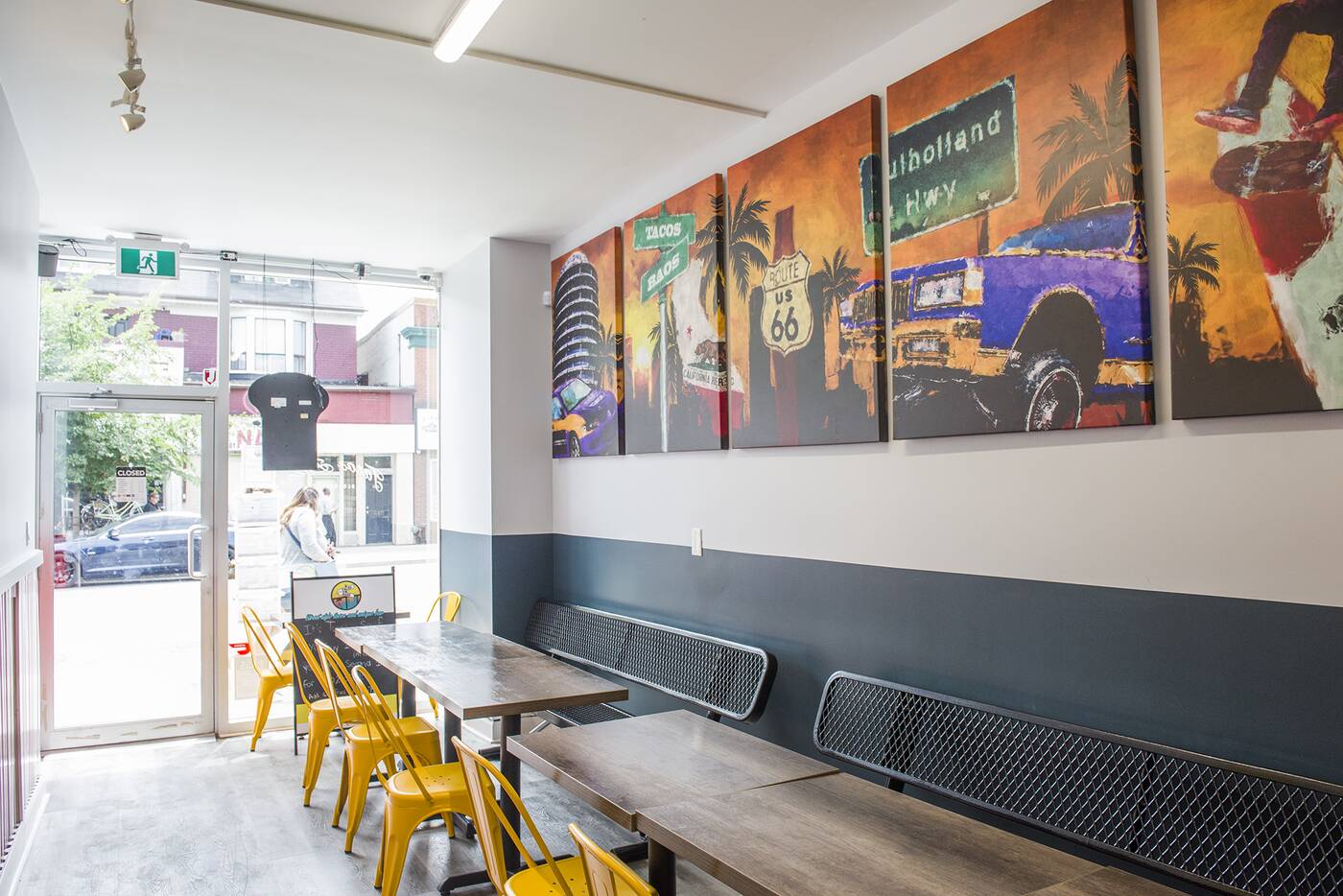 The space is actually a completely rehauled clothing store. The brothers put in the entire kitchen and accessible washroom themselves, adding design elements that represent the feel of a mix of cultures. 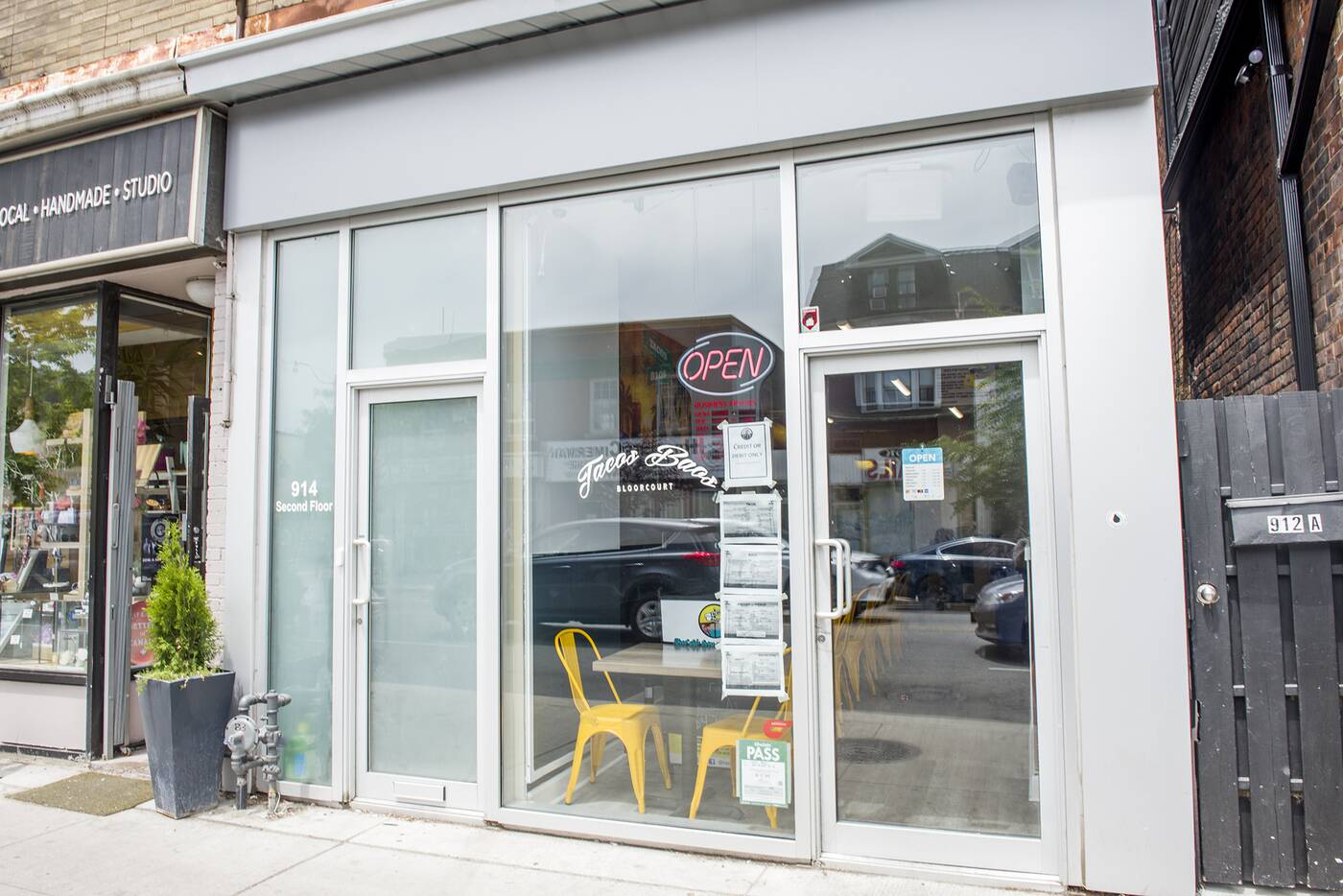