Rustic Social is currently open but their offerings and services may be affected due to the pandemic. Please contact the business directly for more information about any changes. Is this your business? Please contact us if you would like to update this message.

Rustic Social is a lakeside pub owned and operated by a family, revolving around shareable global fusion bar snacks coming out of an open kitchen. 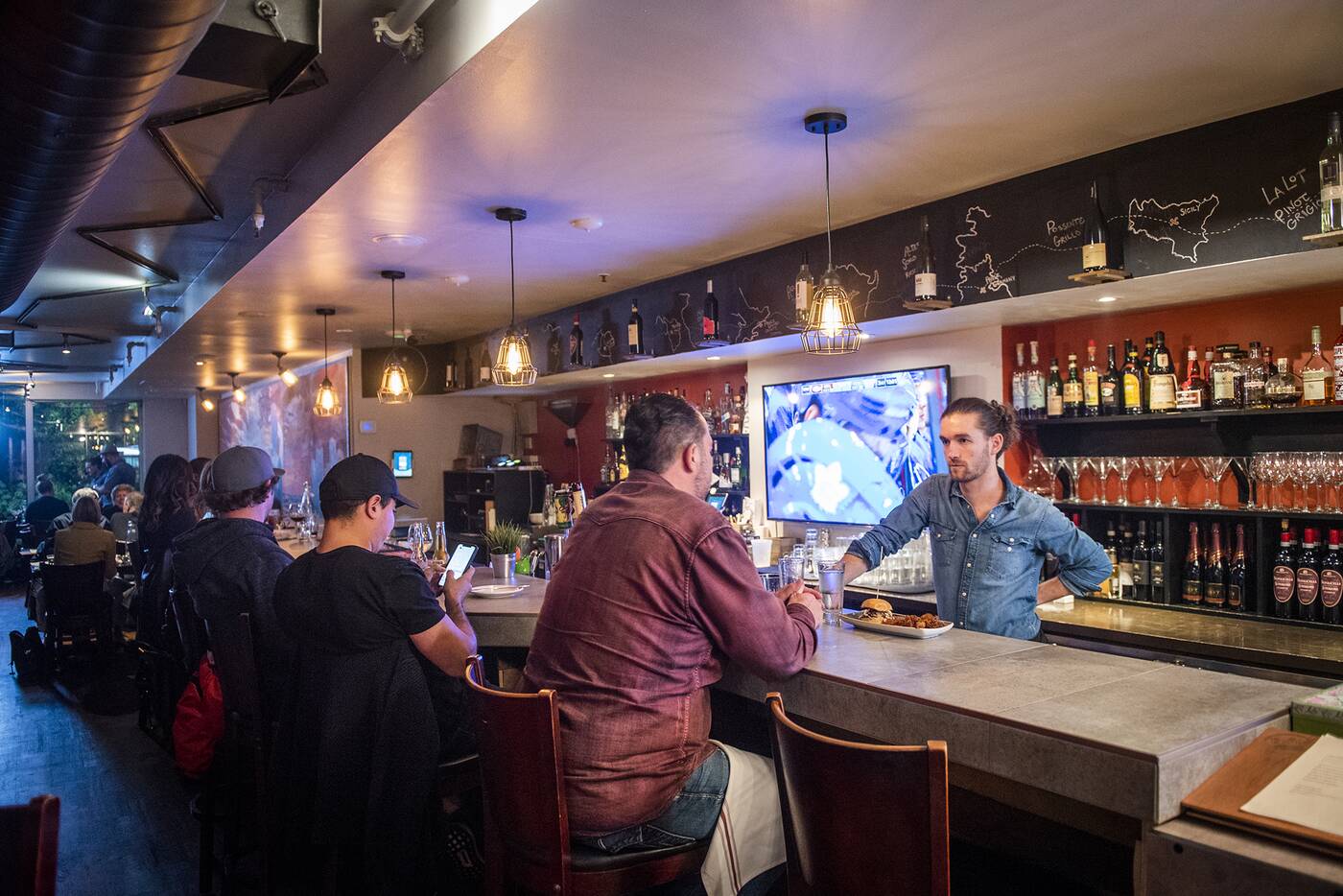 The whole place is pretty casual, but there’s a less formal bar area near the entrance facing a big screen TV.

As you move through the restaurant, the space gets a little more intimate, one wall dominated by a skyline mural by artist Denial, a glowing sign staff have affectionately dubbed the “Rustic Moon” hanging in the window. 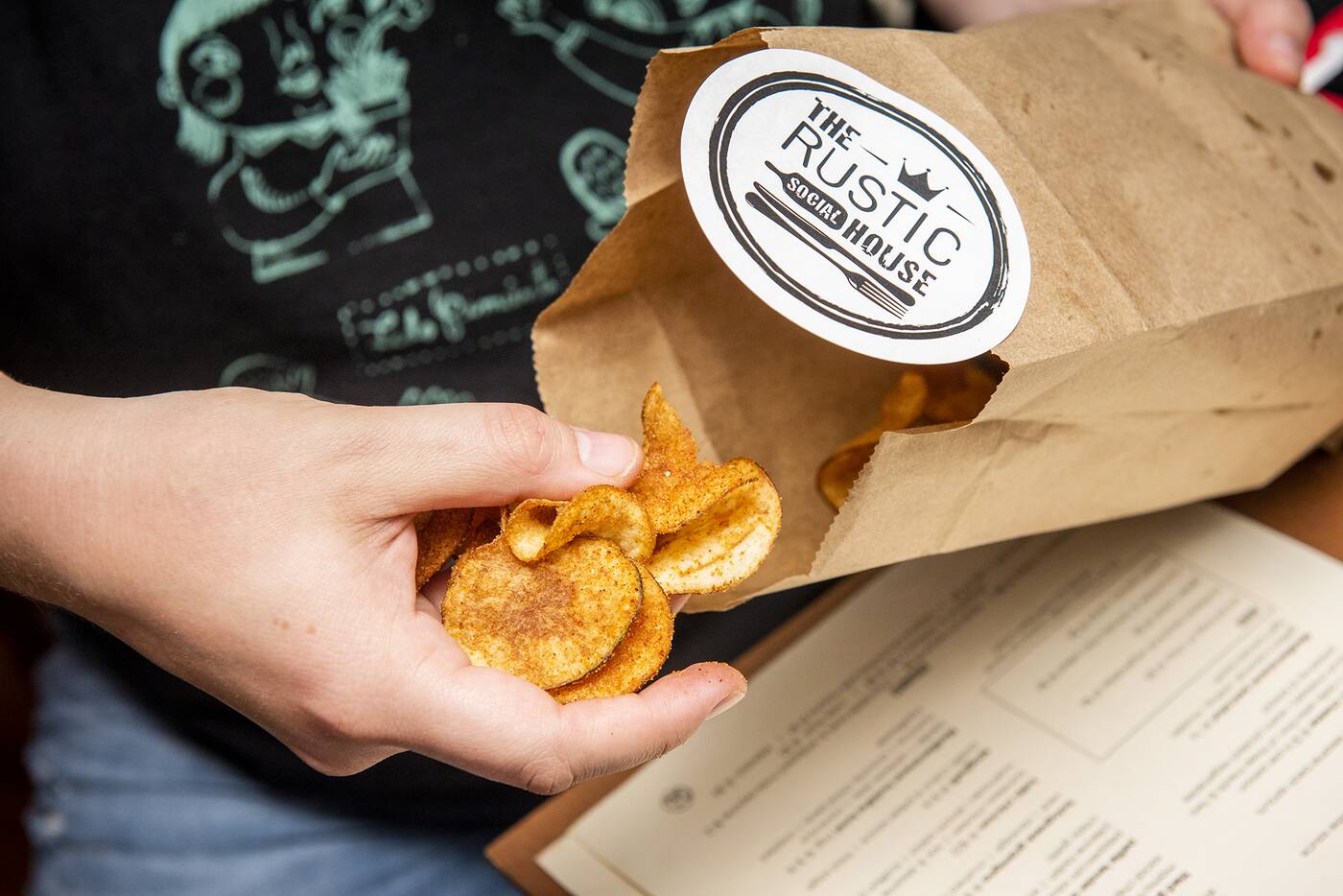 Rustic Social puts a spin on the typical complimentary bread offering starting off a meal by offering Rustic Chips instead, served in a paper bag.

Russets are sliced fresh by hand every day, not too thin and not too thick, fried and seasoned with their own zesty mild BBQ rub with secret spices and brown sugar. 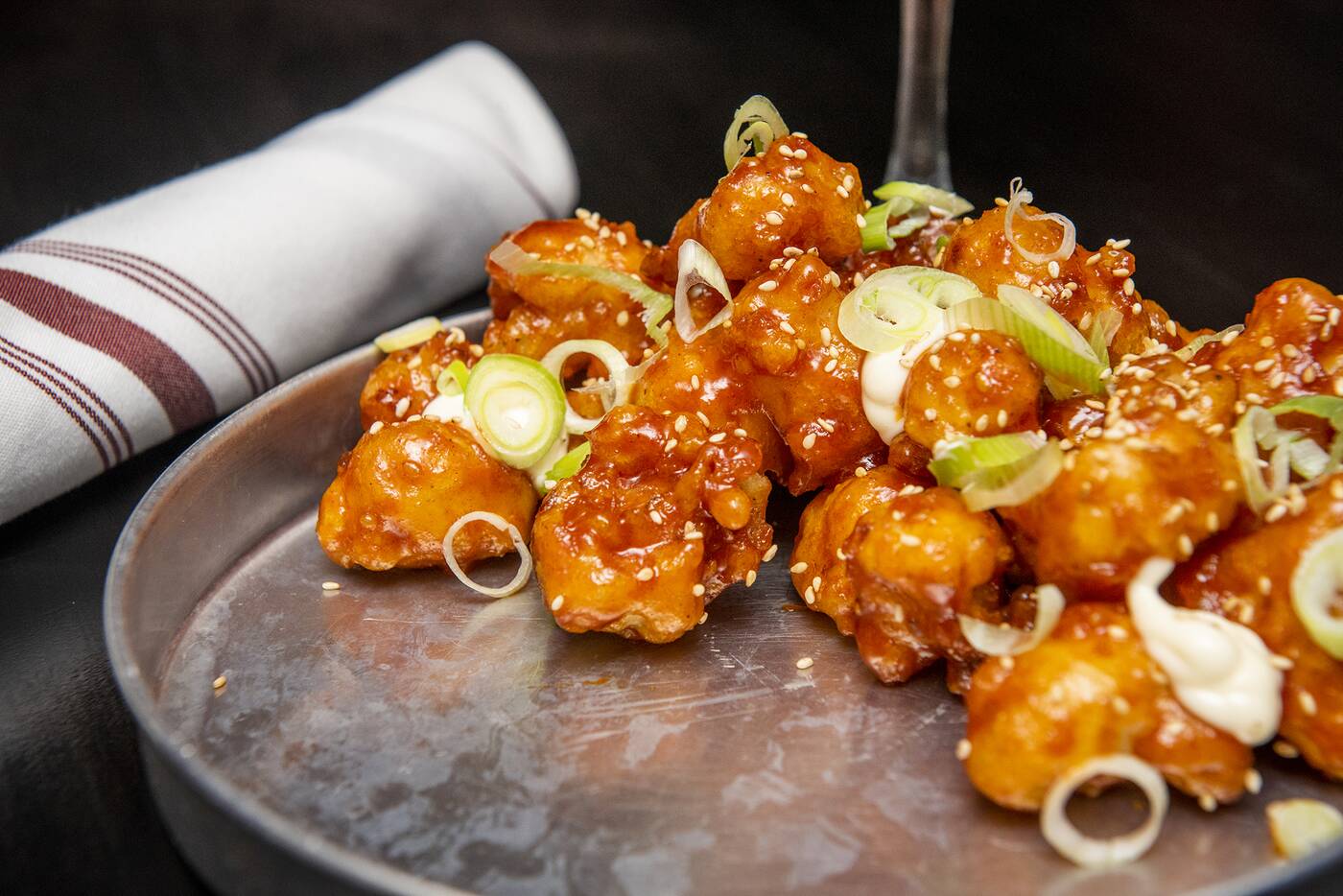 Korean Fried Cauliflower ($11) puts a bit of a spin on the usual Buffalo cauliflower seen so often in snack bars. While the overall flavour profile is still spicy and tangy, there’s a little funk from gochujang and the whole plate of chunky tempura-fried florets is set off by some kewpie mayo and roughly-chopped scallions. 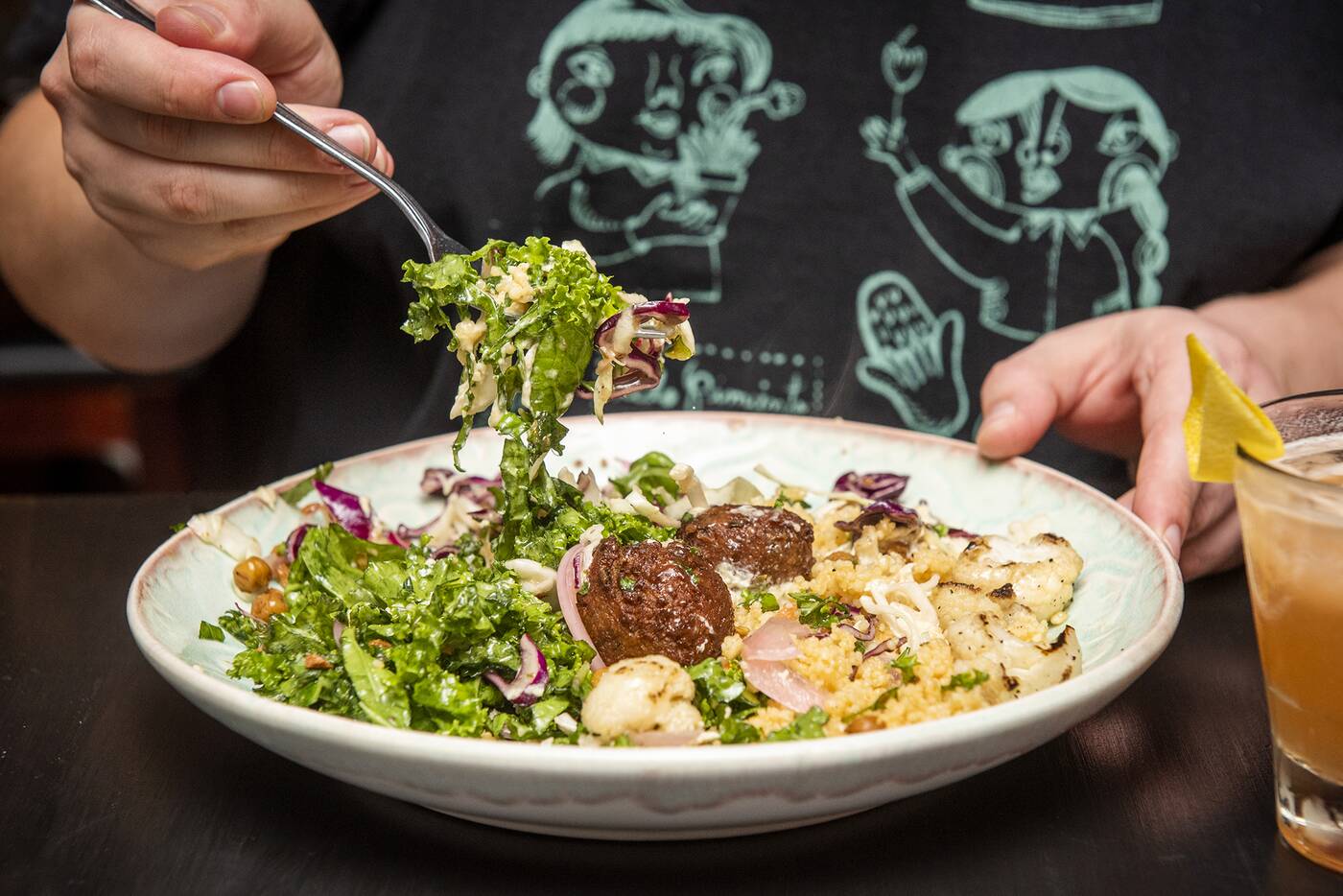 The Mediterranean Buddha Bowl ($18) provides a lighter vegan option, easy to eat component by component or mixed into an earthy grain bowl concoction.

The plate has a vinaigrette slaw, kale with crispy garlic, couscous, pan-fried cauliflower, and dense cumin-forward house falafel, all scattered with crispy chickpeas. 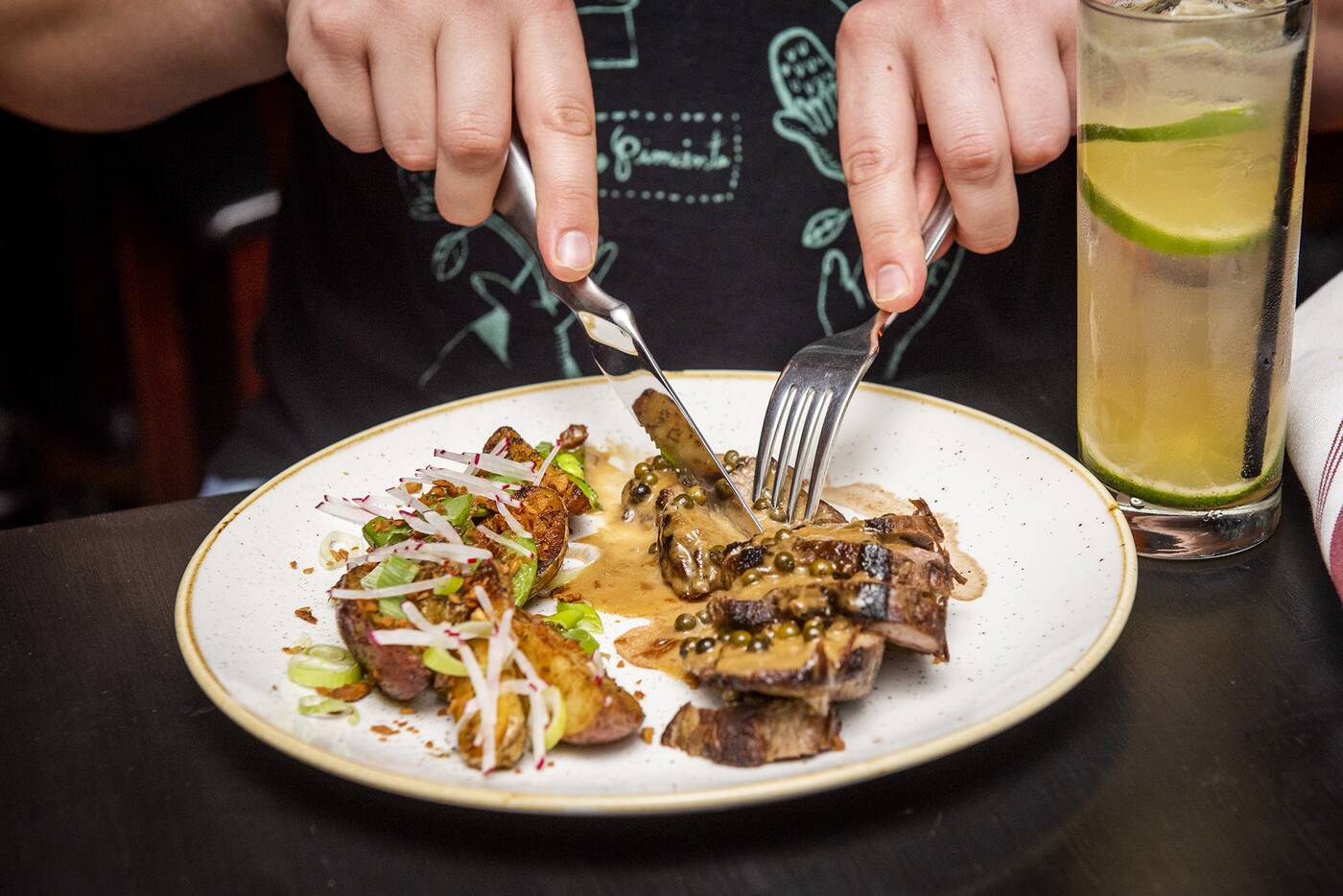 A Petite Tender Steak ($27) is a seven-ounce cut closer to the chuck area, like a tenderloin but about half or a third the size. Pre-sliced, it’s moistened by a silky peppercorn demi made with shallot, cognac and veal jus, served with a warm potato salad with bright snap peas and spicy shaved radish. 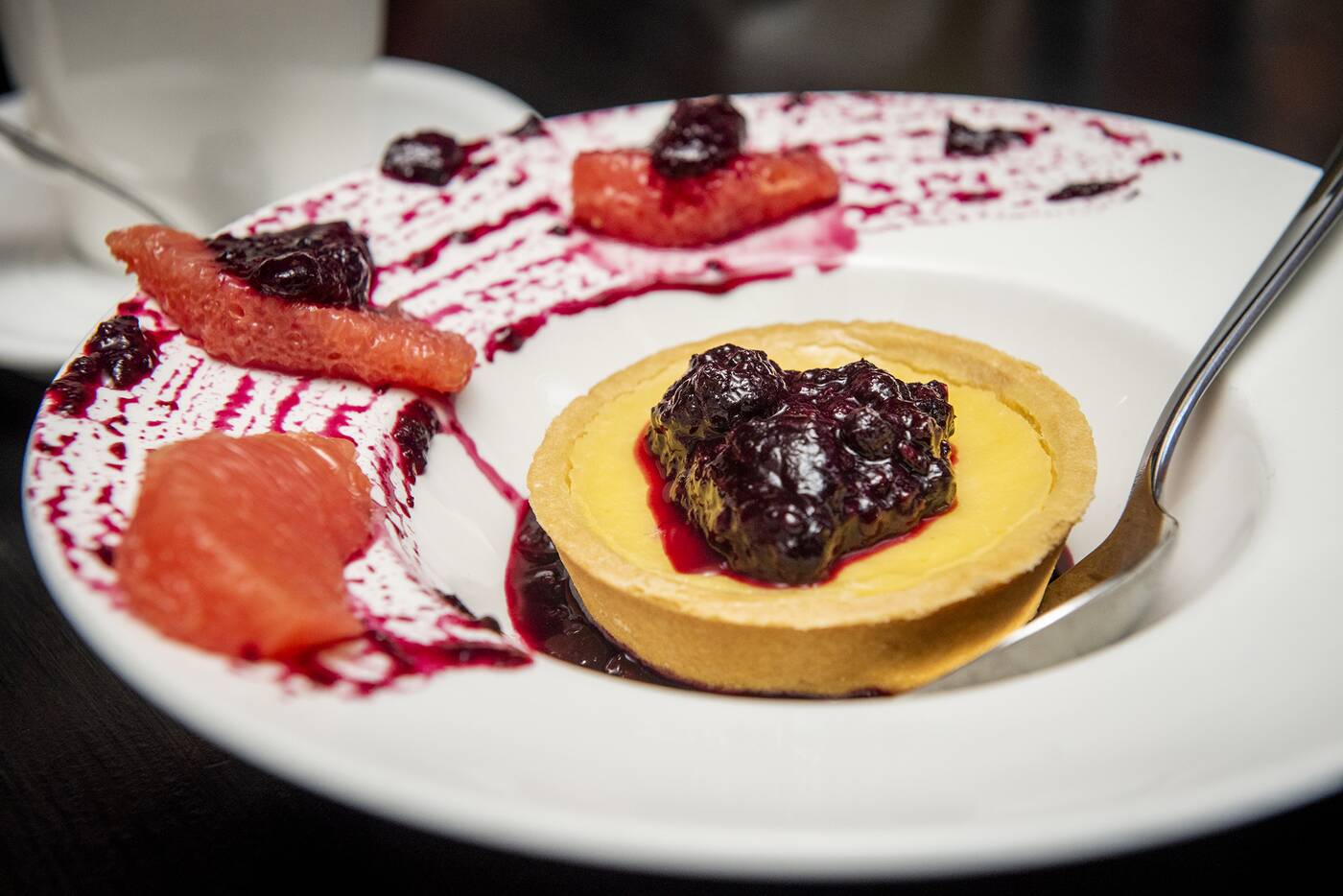 For dessert there’s a Grapefruit and Wildberry Tart ($9) that has an original and acidic grapefruit custard and a wildberry compote topping. 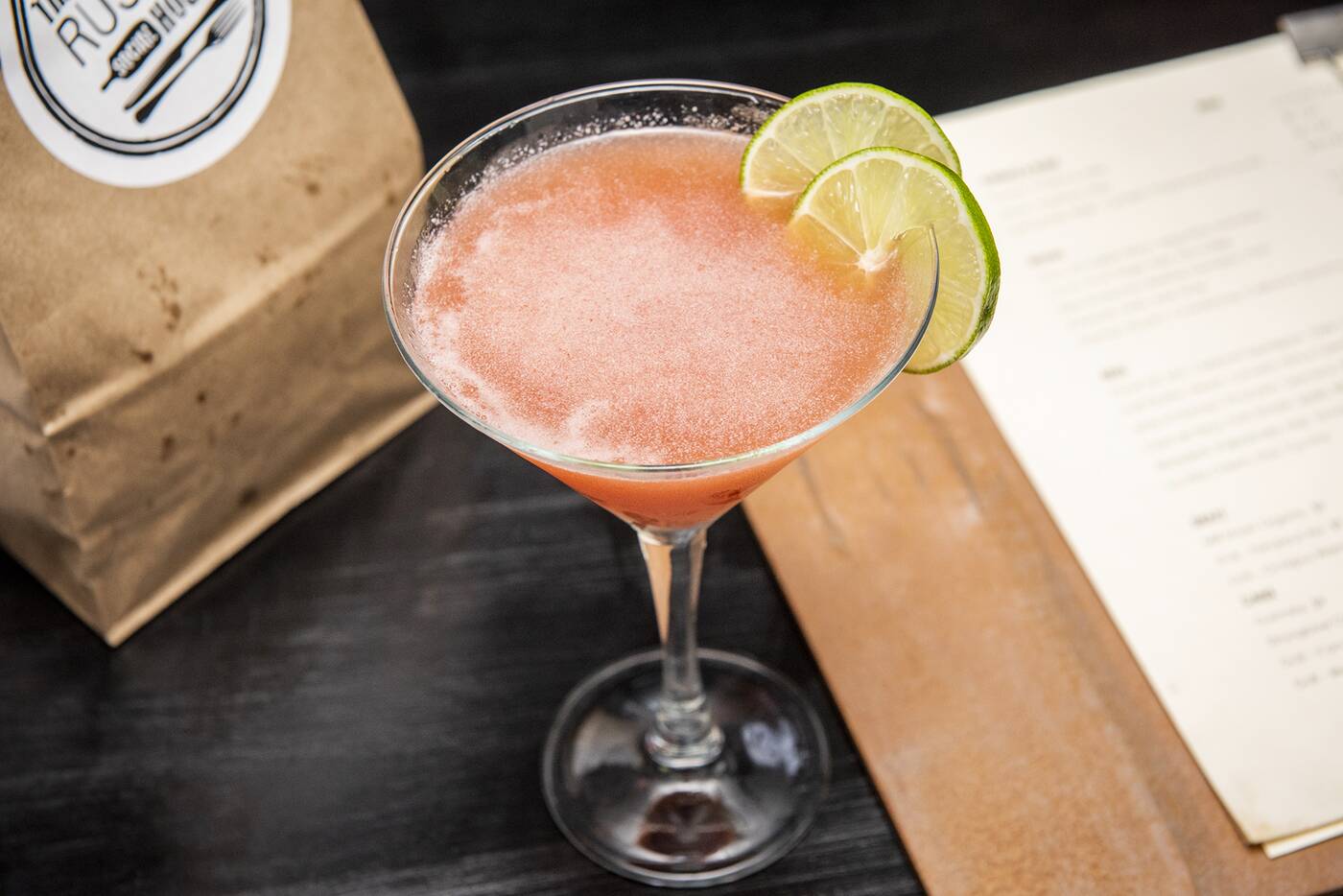 No Regrets ($15) is a boozy and tart, yet still accessible gin-based strawberry and lemon cocktail topped off with ginger beer and garnished with a couple lime wheels. 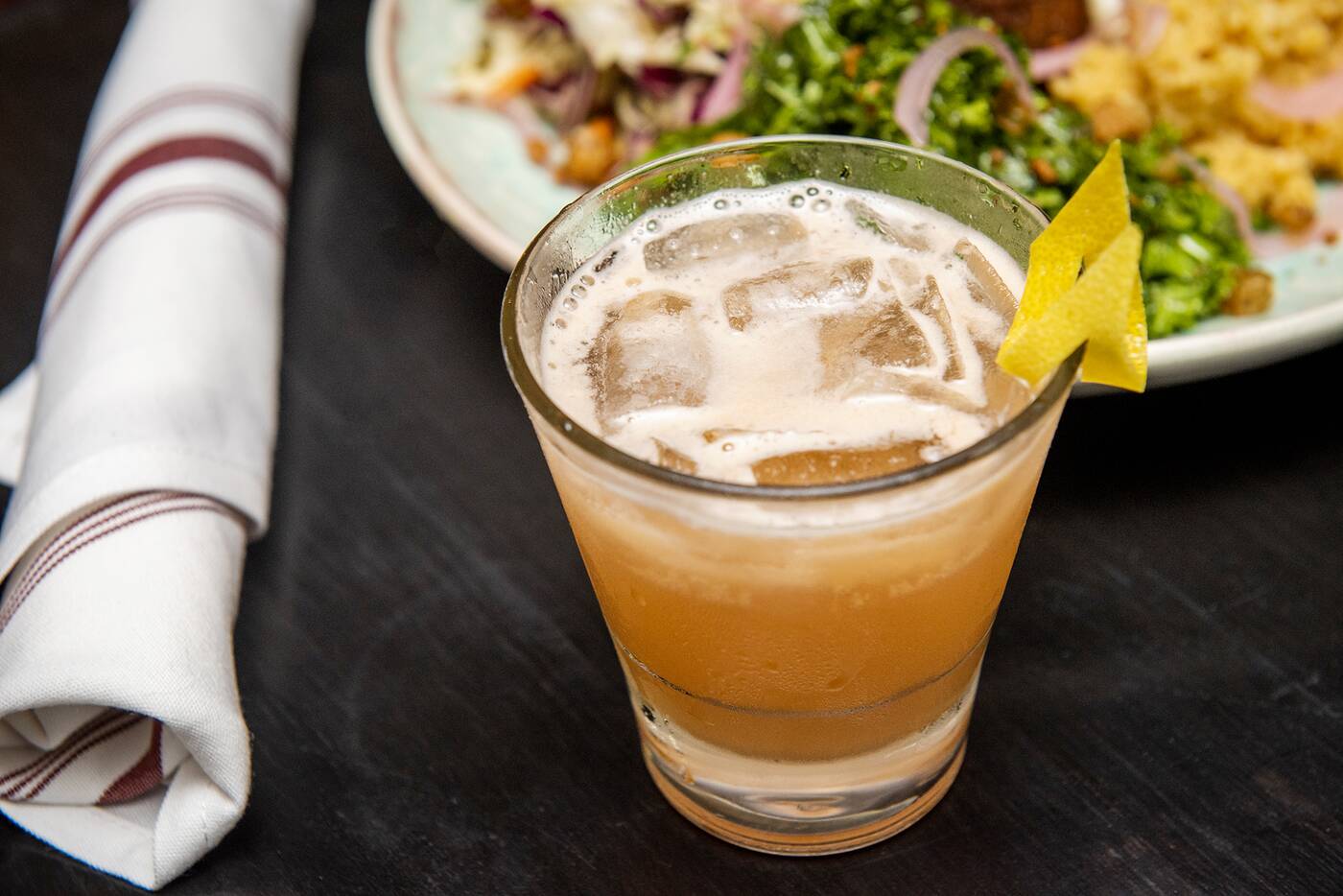 The Six King ($15) is gin-based but has a strong Cointreau-forward flavour, garnished with a sliver of lemon peel. 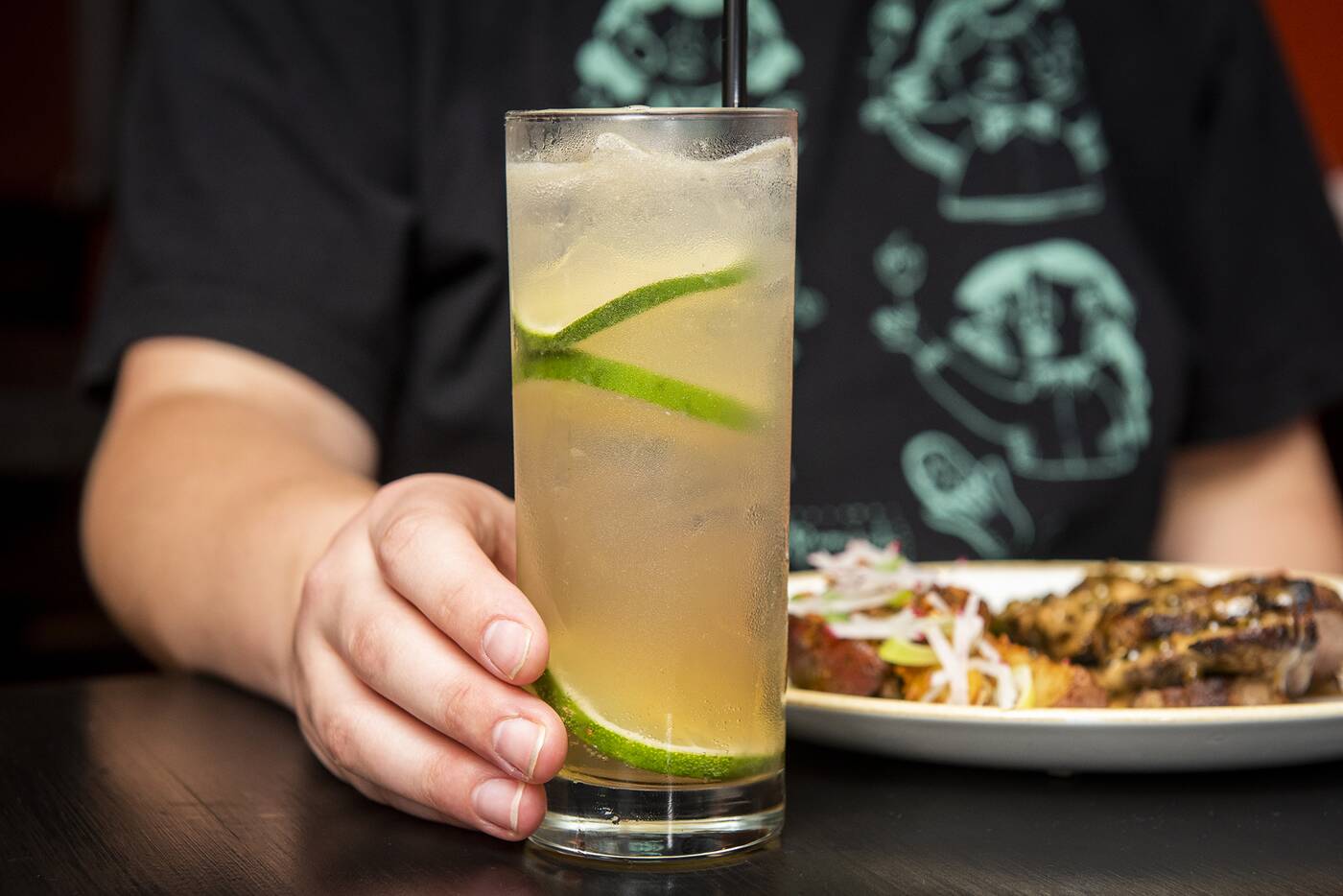 A Rustic Whiskey Mule is a “rustic-inspired” version of a Moscow Mule with the same basic components of vodka, ginger beer and lime but with the subtle addition of whiskey barrel bitters. 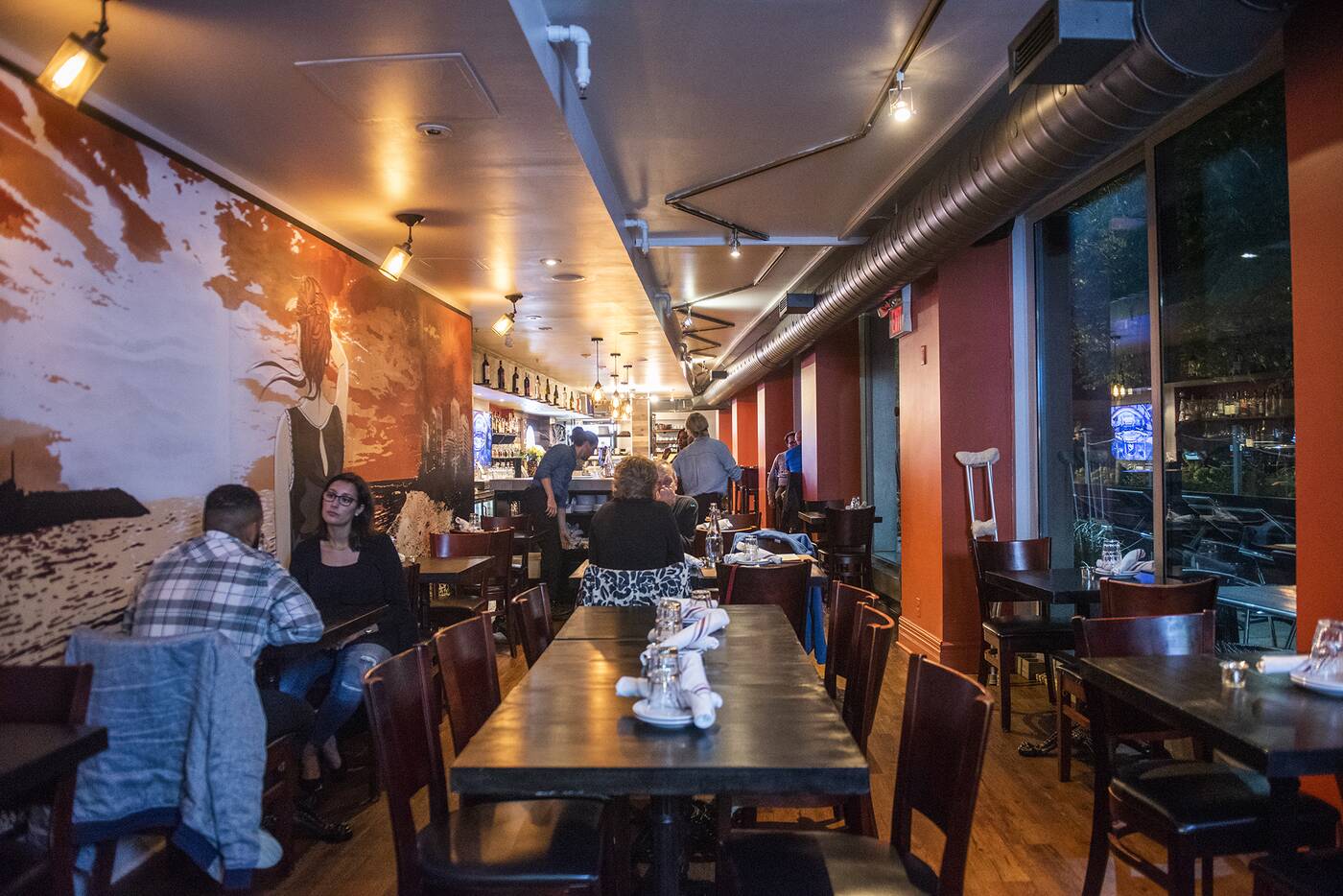 There’s also a chef’s table program here where you can get dishes especially designed for you, and even help cook something in the open kitchen and literally make your mark on the space by branding a wall. 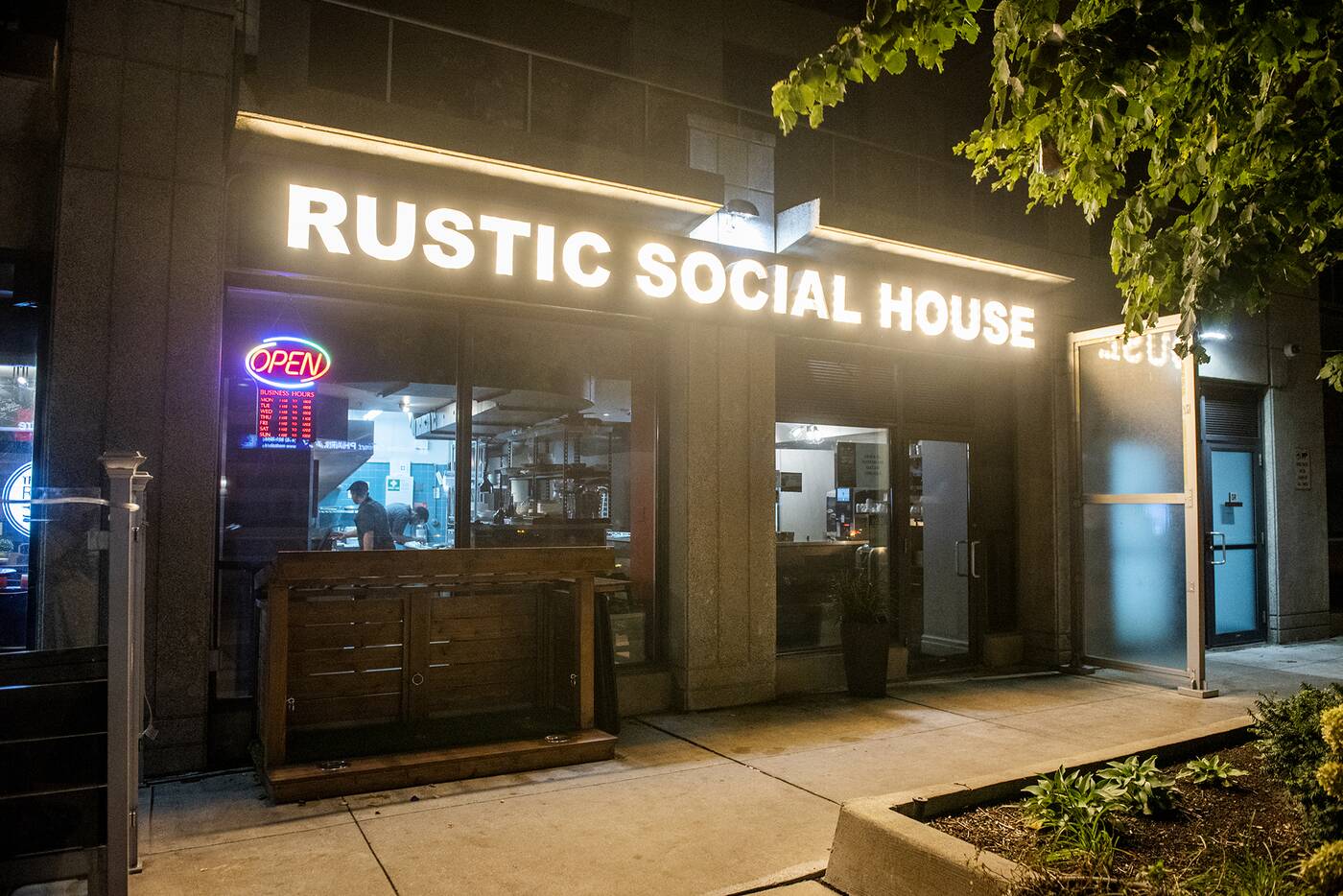