Royal Myanmar is where to go for Burmese food in Toronto. The restaurant serves up a mix of noodles, soups and spicy salads. The flavours are distinct with fermentation, spice, brine, nuttiness and fresh herbs all playing a role.

Canada doesn't have a large Burmese community. There are fewer than 5,000 Burmese people living in the country and barely 1,500 in the GTA. Though you can find some stores selling ingredients essential to Burmese cooking, actual restaurants serving this type of food are rare, and Royal Myanmar’s prices are great. 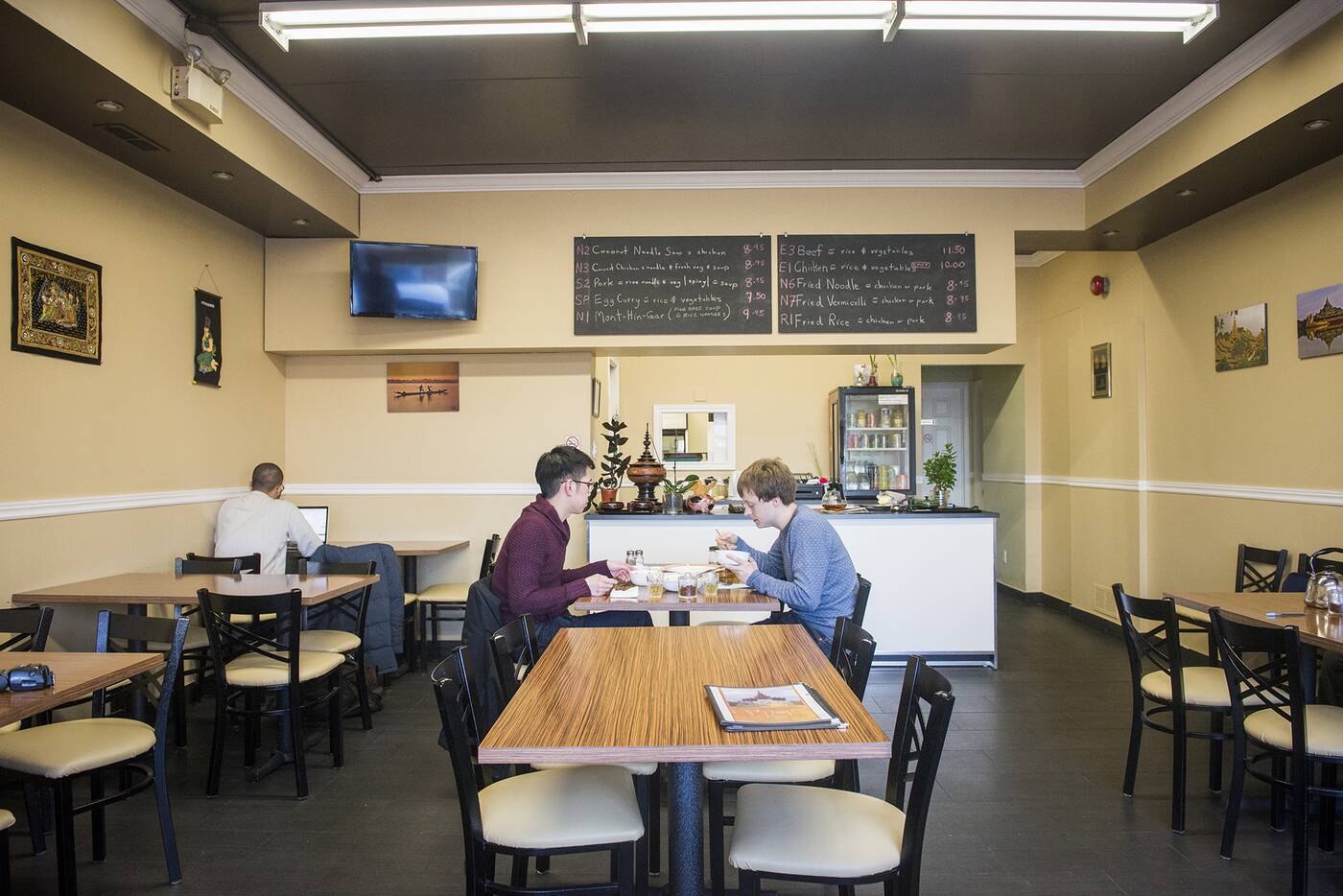 Though large, the restaurant is sparsely decorated, mostly with traditional Burmese art. Owner Ommar’s aunt, Bessie Terzi, owns shop Mya Yadanar where all of it’s from. She feels like a sort of cultural ambassador, telling us her shop even has a booth at the CNE. 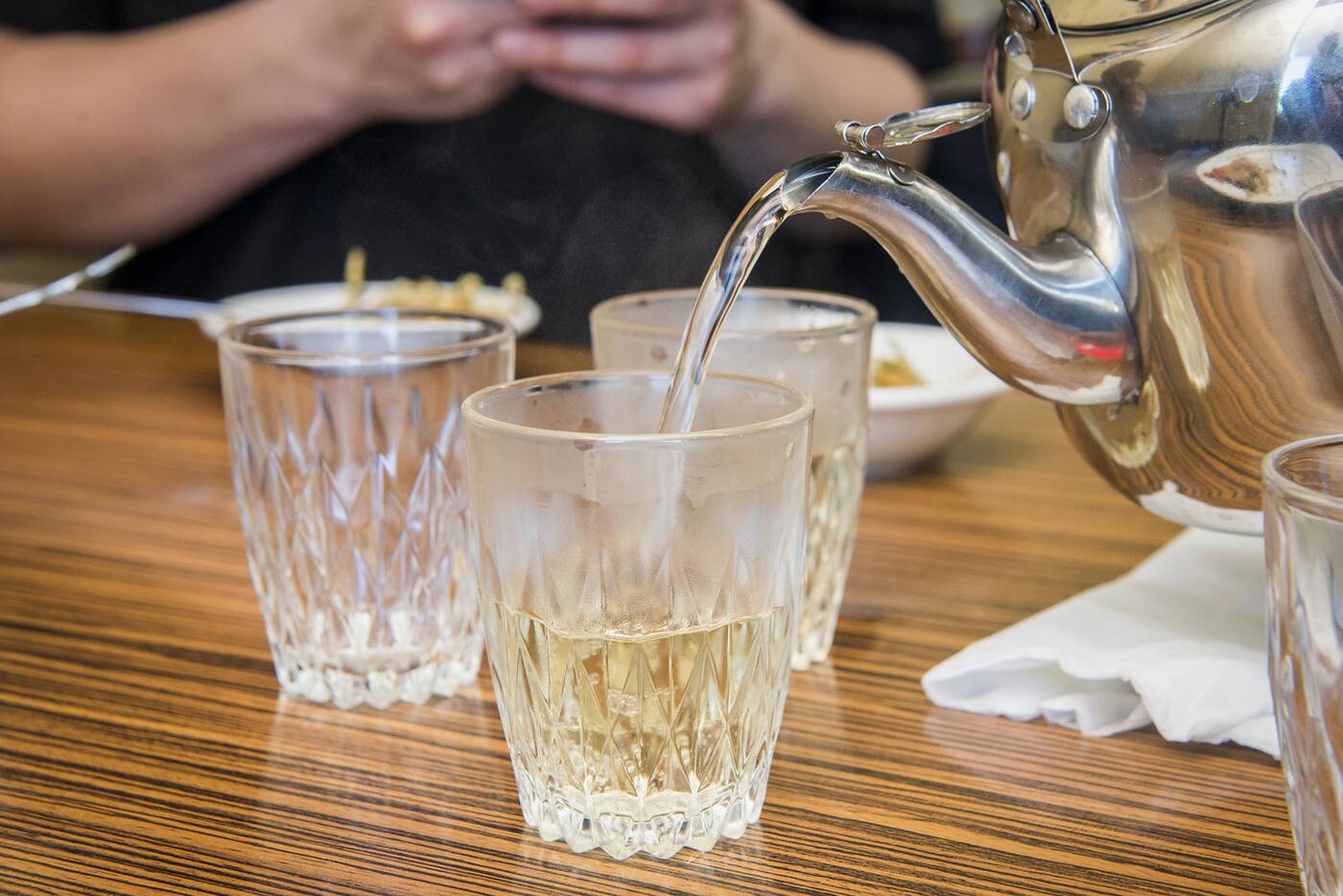 Naturally, she begins instructing us on what to order and the rituals of eating Burmese food. Meals start off with a complimentary pot of Burmese green tea. Terzi informs us tea shouldn’t smell or be too strong, and that this is pure tea undiluted by herbs or roasted brown rice. 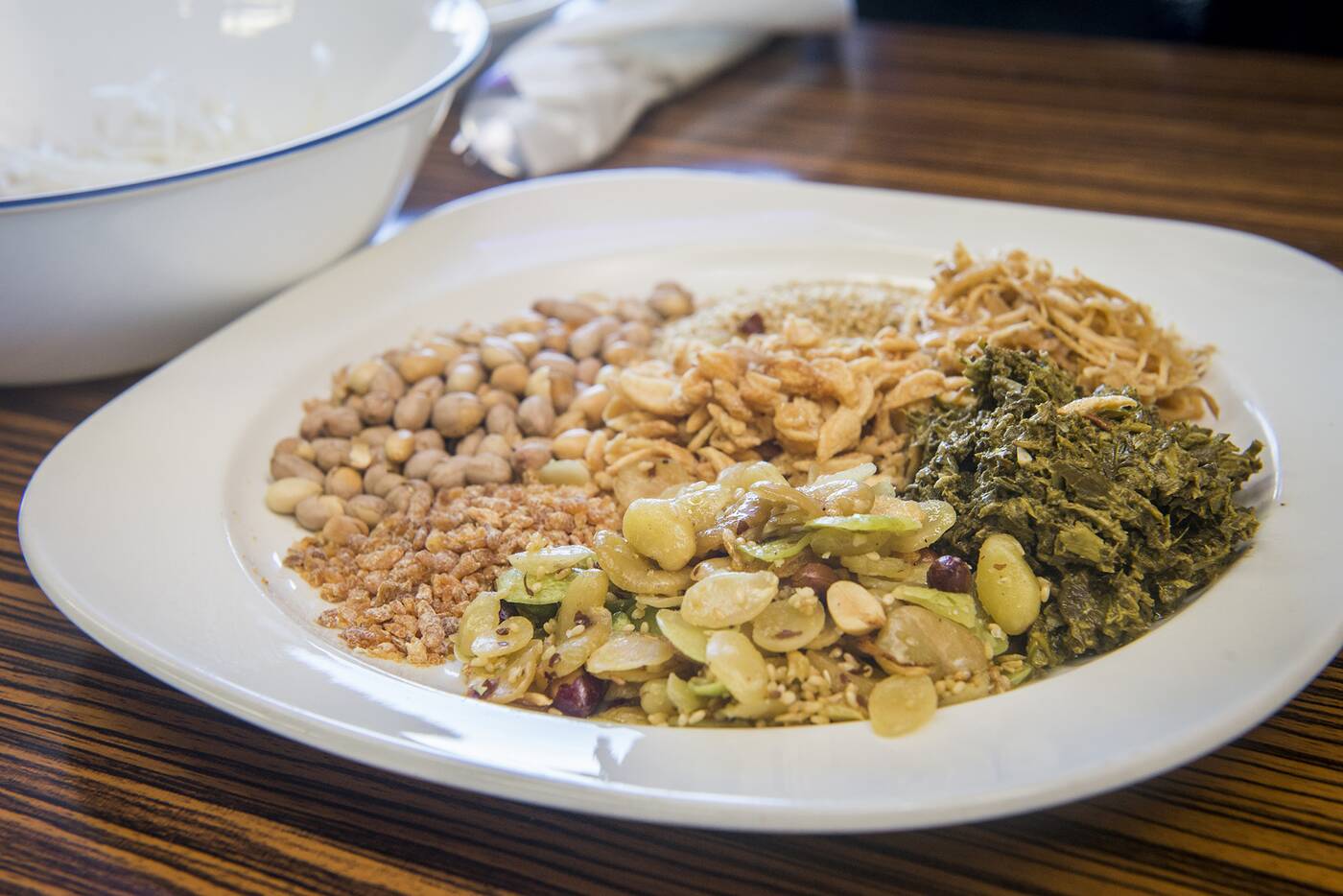 Tea is central to Burmese cuisine, especially pickled tea leaves called laphet, preserved in earth in bamboo for about three months then washed. This is the central ingredient of spicy vegetarian salad laphet thoke ($6.95). 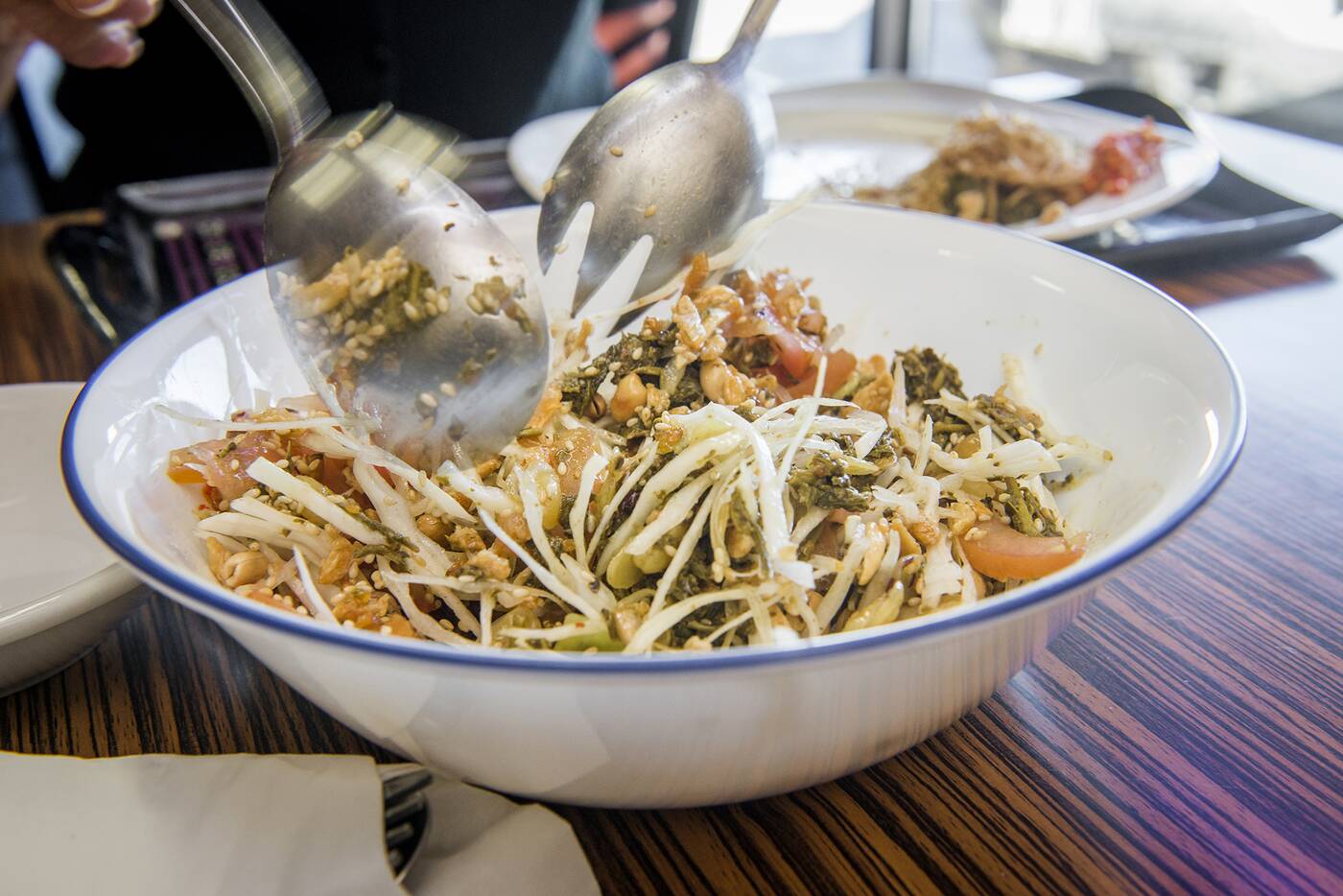 Like many items, this starts as two plates, one with thin noodles and shredded cabbage, the other with fried garlic, sesame seeds, peanuts, beans, and the edible tea leaves. 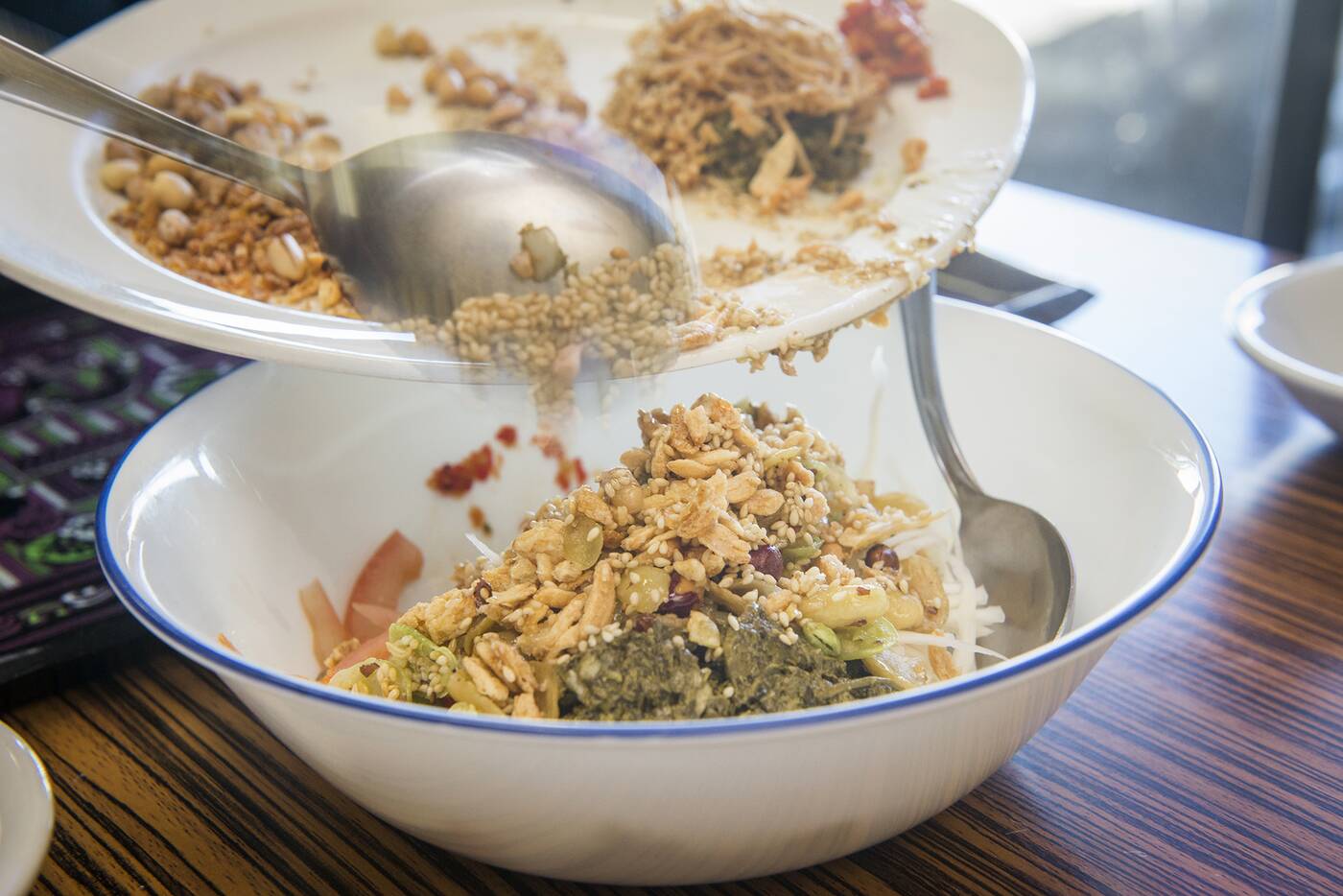 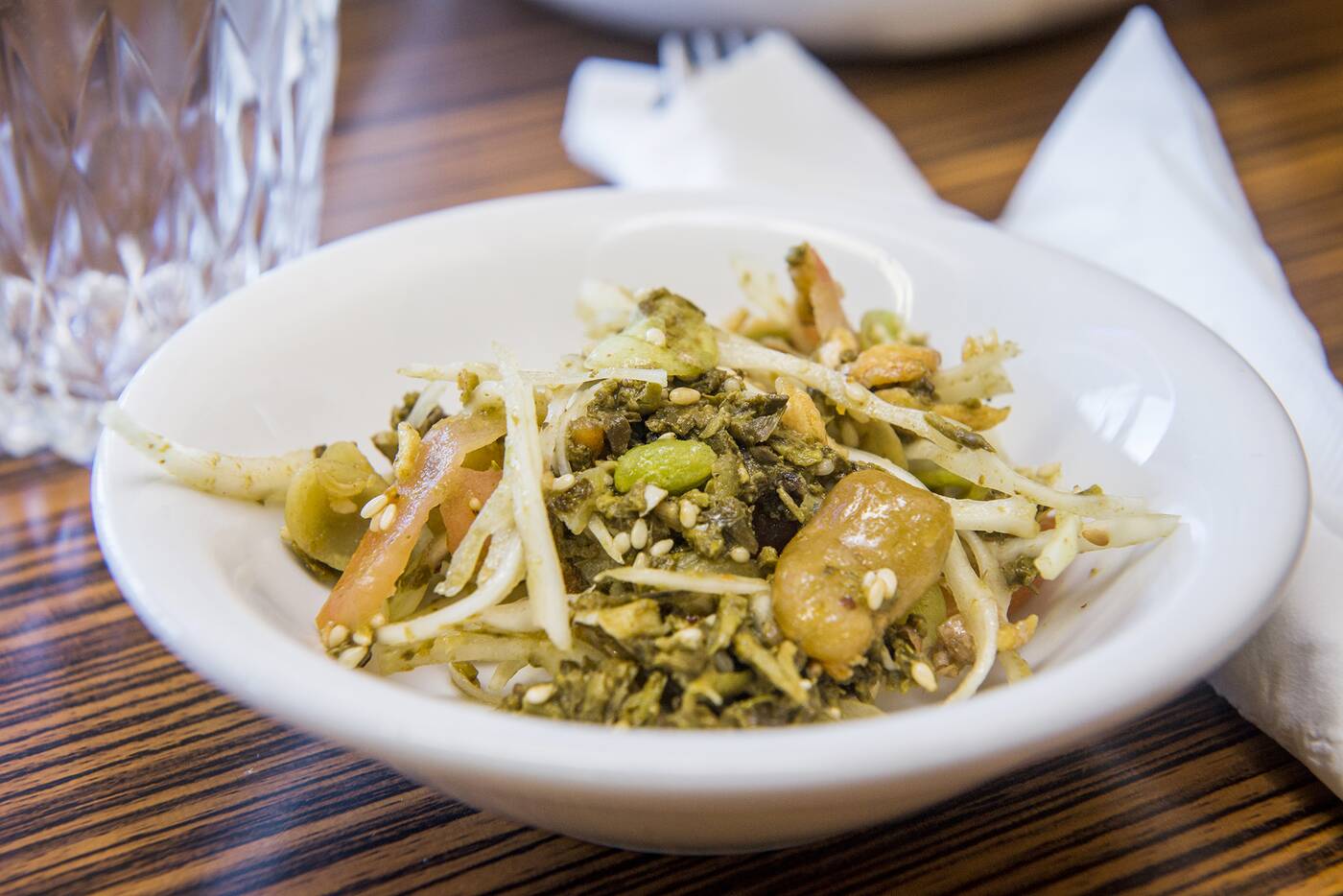 The result is doled out into little bowls: sour and funky tea leaves flavour slippery noodles also layered with crunchy nuts and snappy beans. Chilis are screamingly hot, but the tiniest amount makes all those flavours sing. 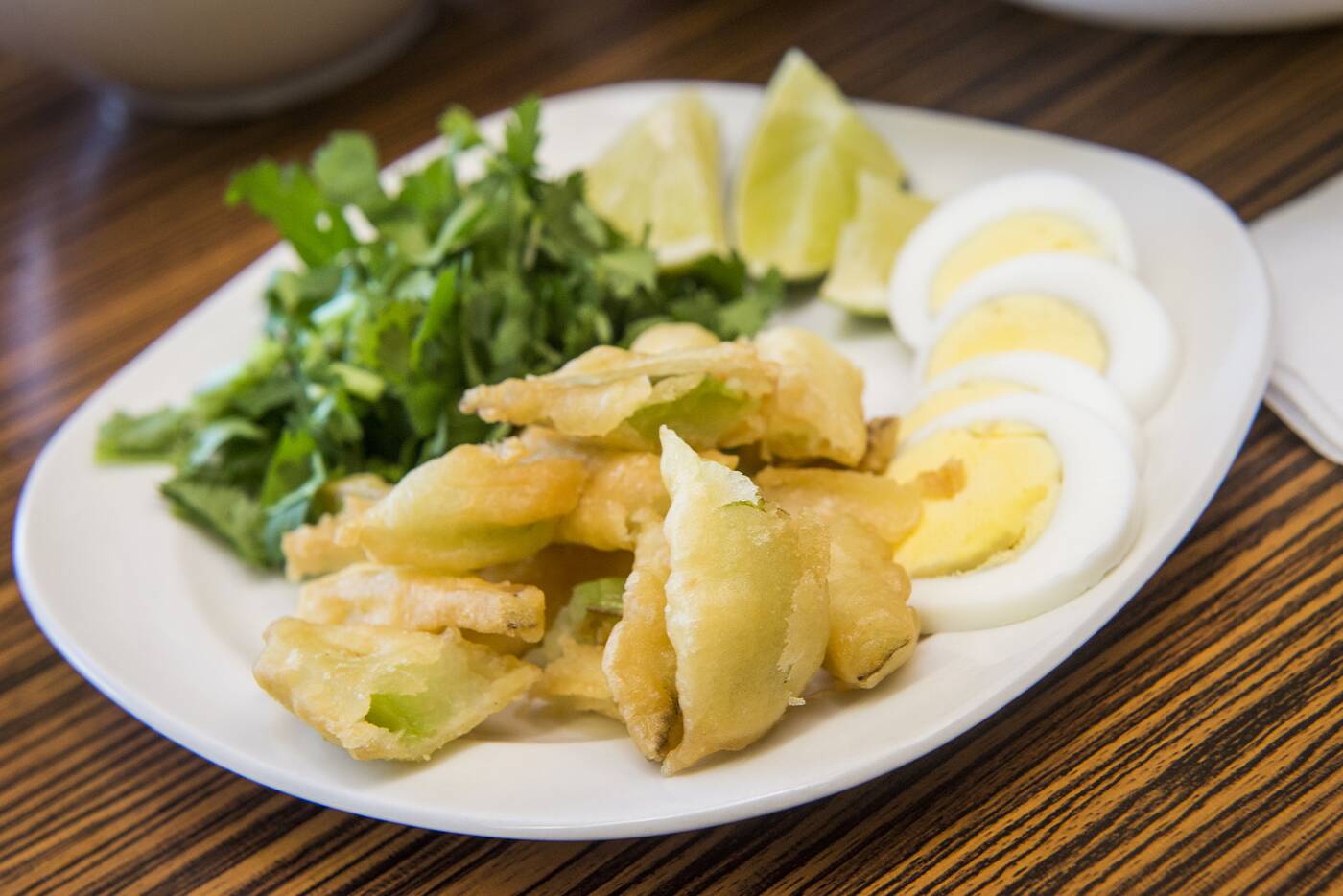 Mohinga ($7.95), Myanmar’s national dish, similarly starts out as a bowl of fish soup and a plate of toppings, sliced egg, fried chayote squash, lime and coriander. Consummate chilis are always available to add to anything. 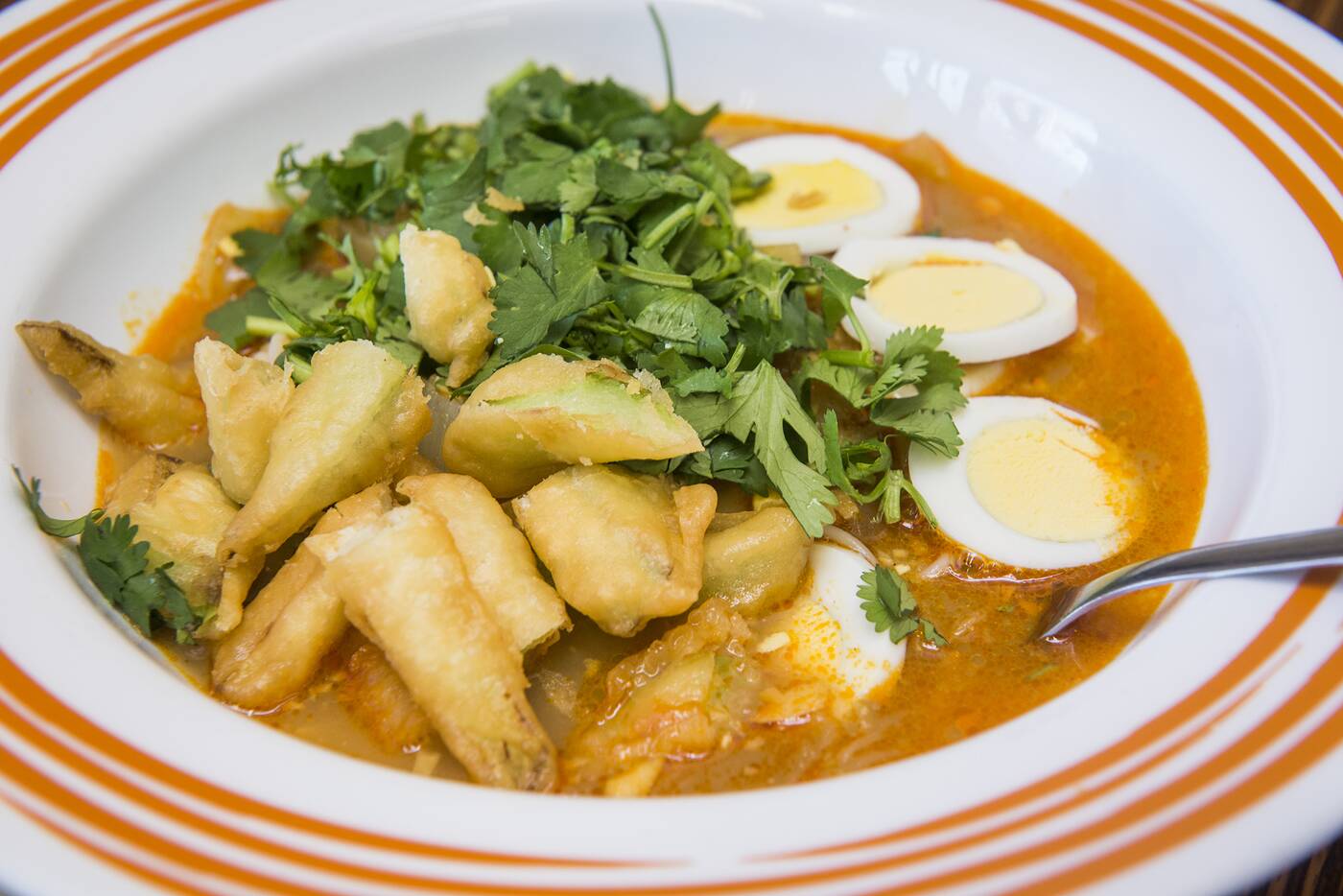 It’s made with catfish today, which was boiled, shredded and incorporated into a broth almost like a fish puree with fried garlic, onions, lemongrass, and ginger. It’s spicy but comforting, apparently great for colds, and the soft chunks of squash with a crispy fried exterior add extra pop. 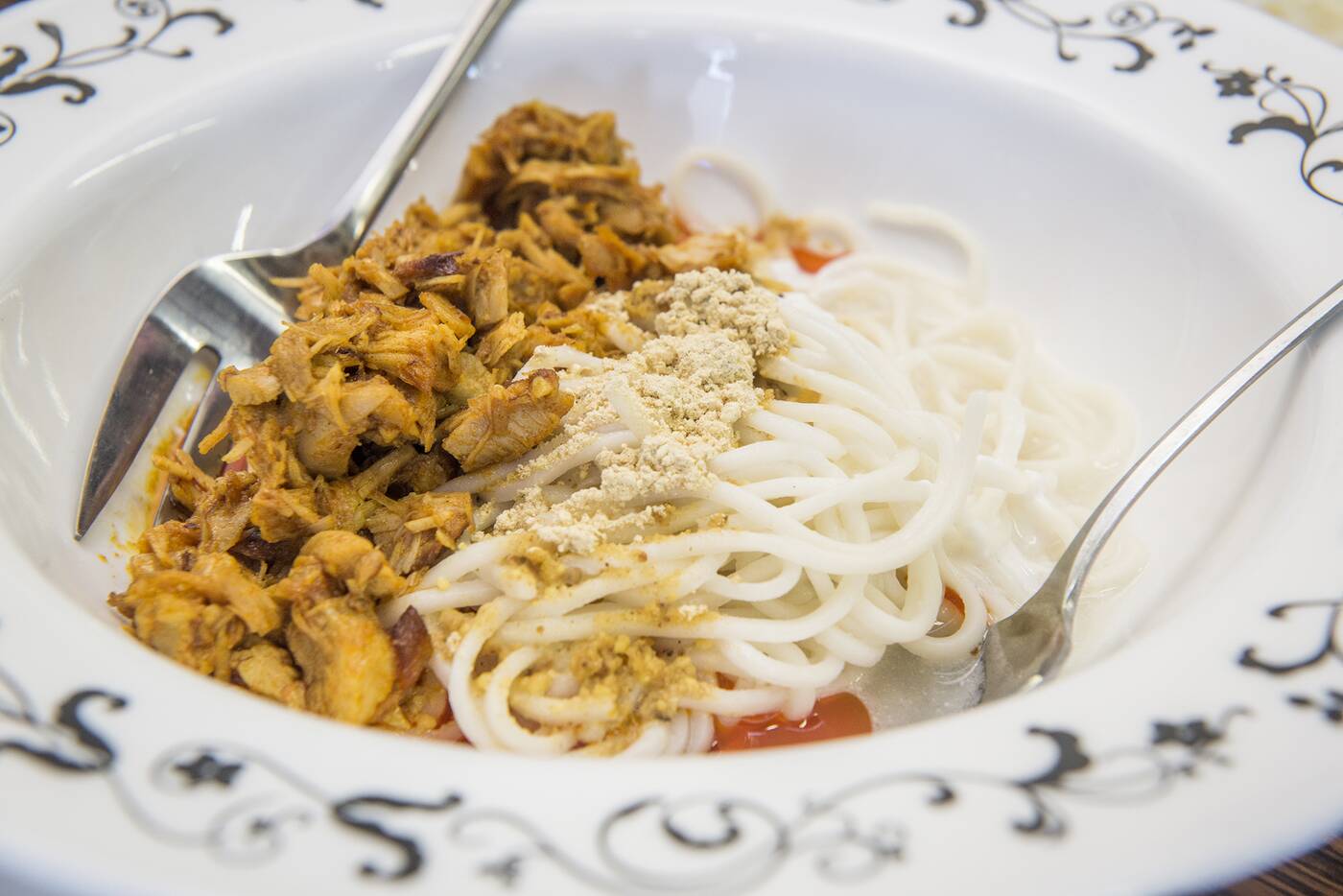 Shwe toung ($7.95) is a dish of curry chicken with thicker noodles than the salad, bean powder, cabbage, onion, coconut milk on the bottom with the curry pleasantly bleeds into and fried noodles on top. 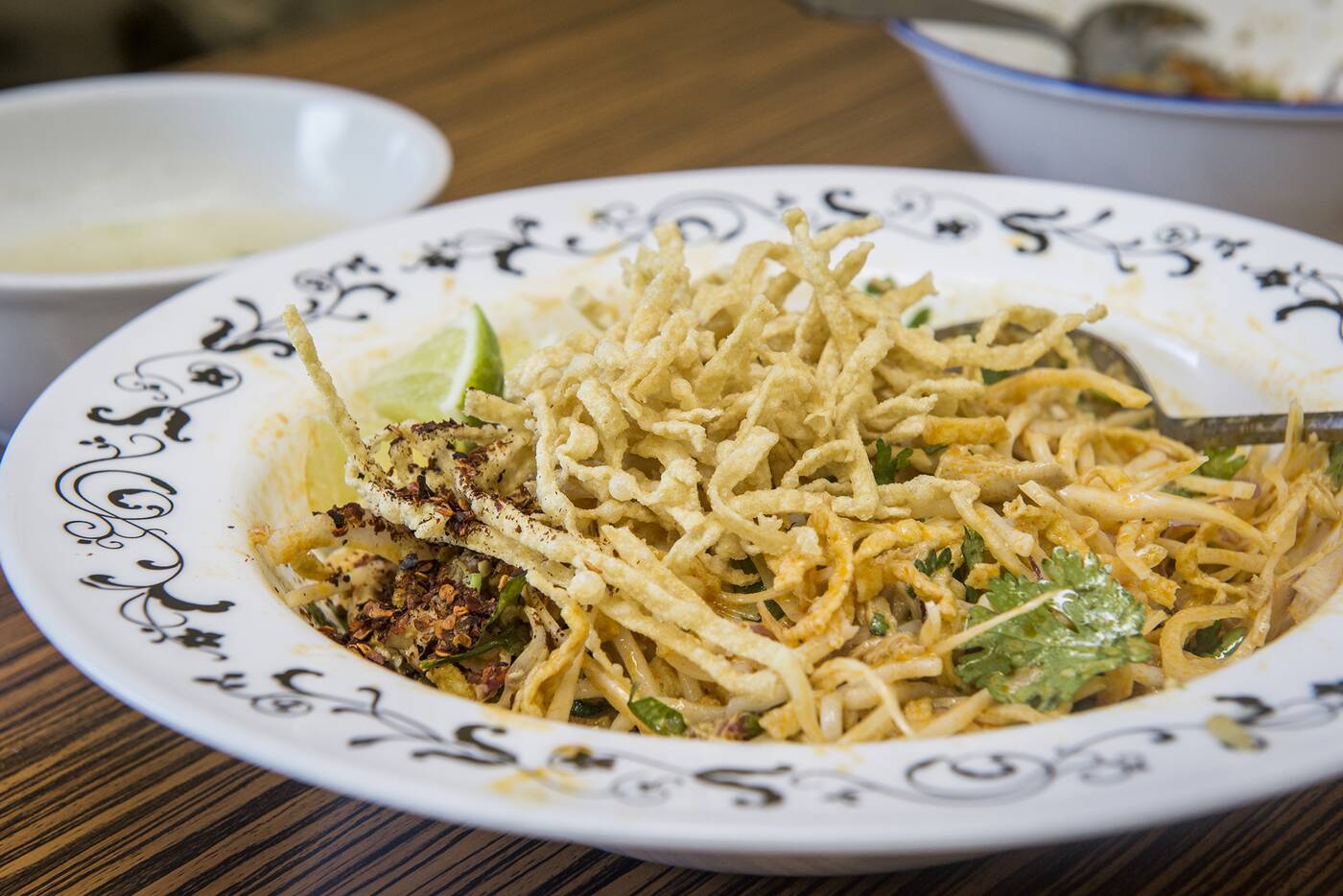 Peppery, plain broth on the side is meant to be simply drunk, and coriander and lime provide bright toppings. 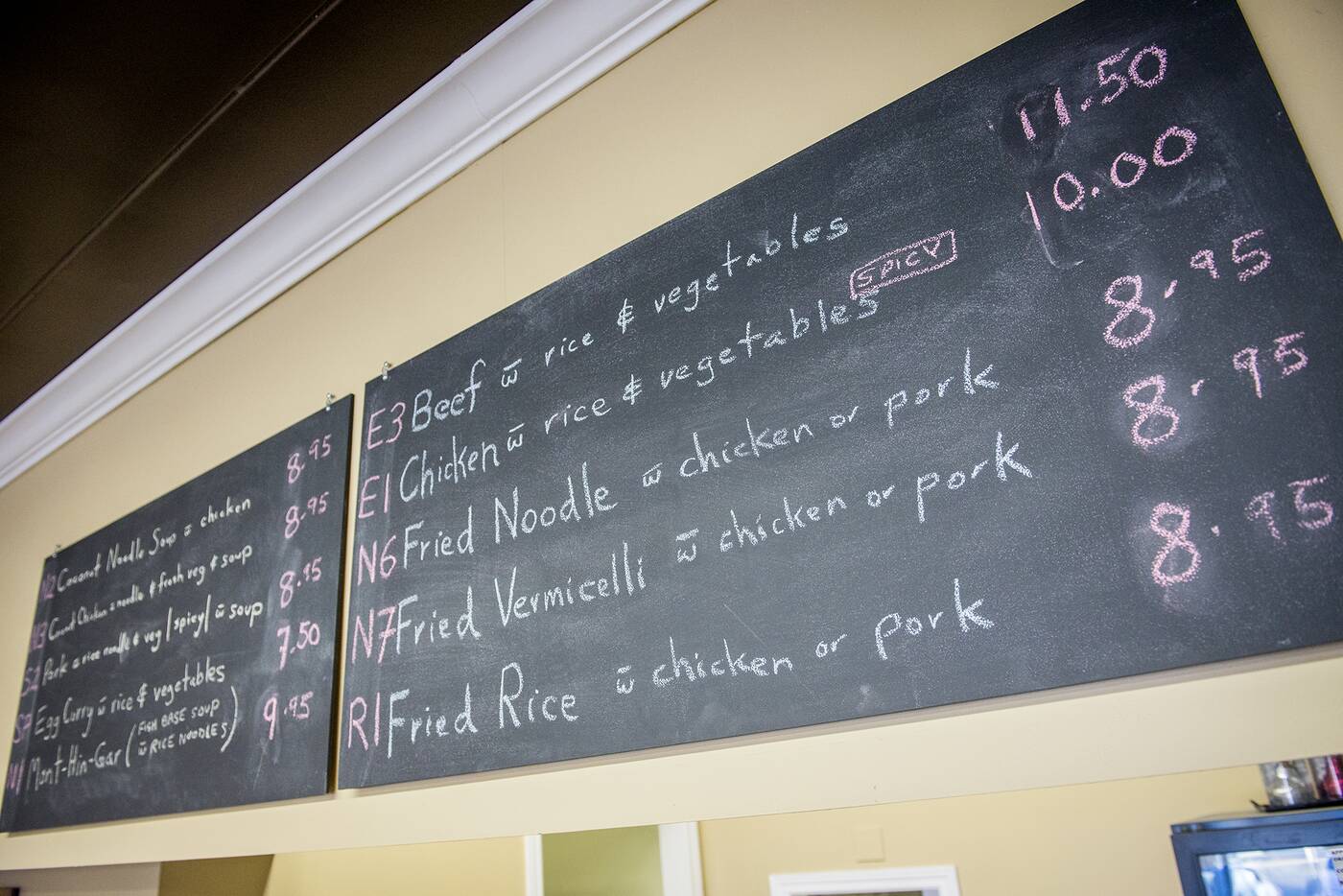 Burmese is a cuisine of sharing, spice, and of course, noodles. 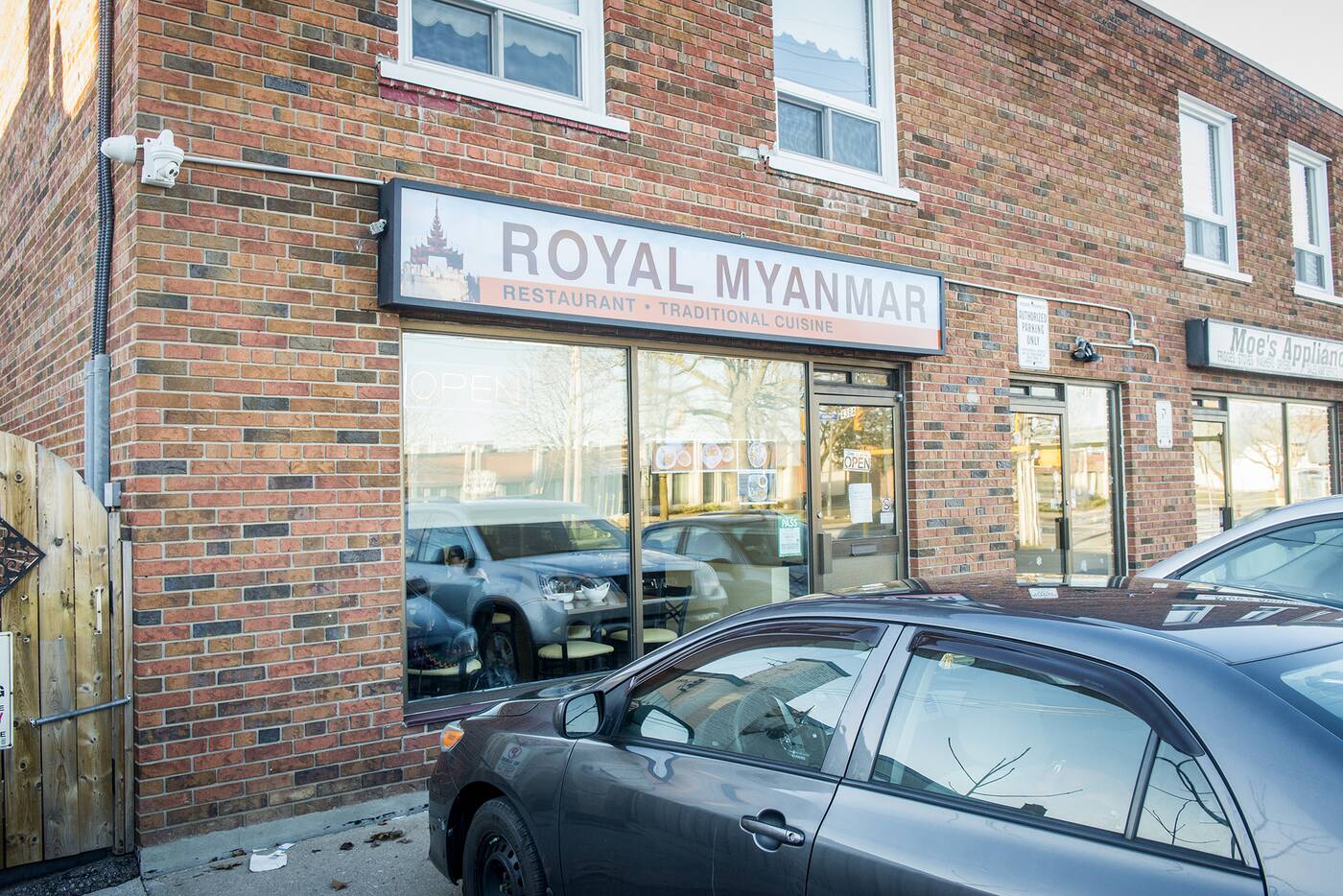