Rose and Sons has always been a Jewish deli at its heart in many ways.

Having enjoyed many years as Rose and Sons Restaurant with a more diner-style menu including incredible breakfasts (which, don’t worry, haven’t changed much), sticker lettering now spells out DELICATESSEN over the word RESTAURANT in the front window. 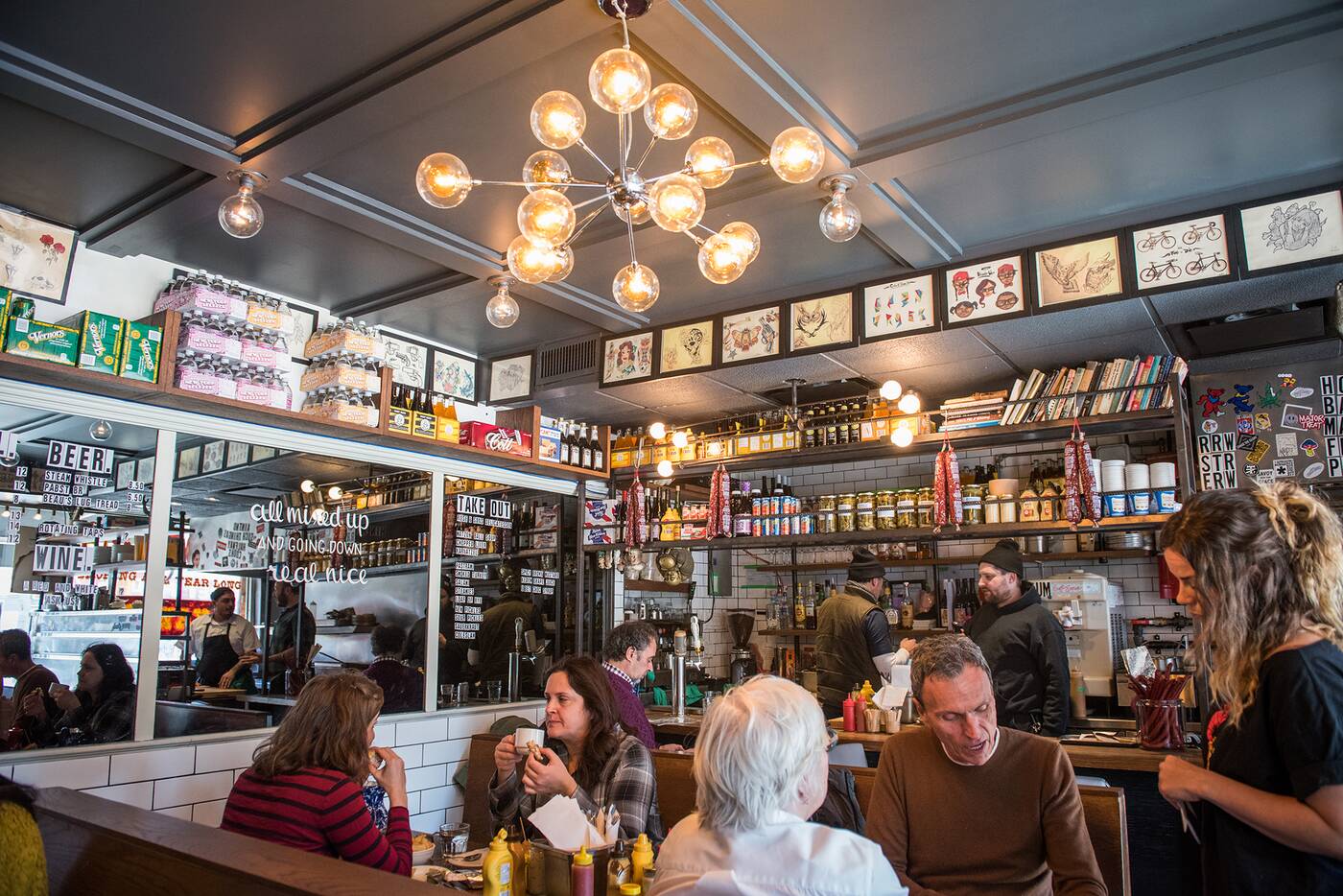 Inside, the place is a huddle of old-school wooden booths, flash art hanging on the walls above a miniscule open kitchen and bar area, the hood and pass plastered with stickers. 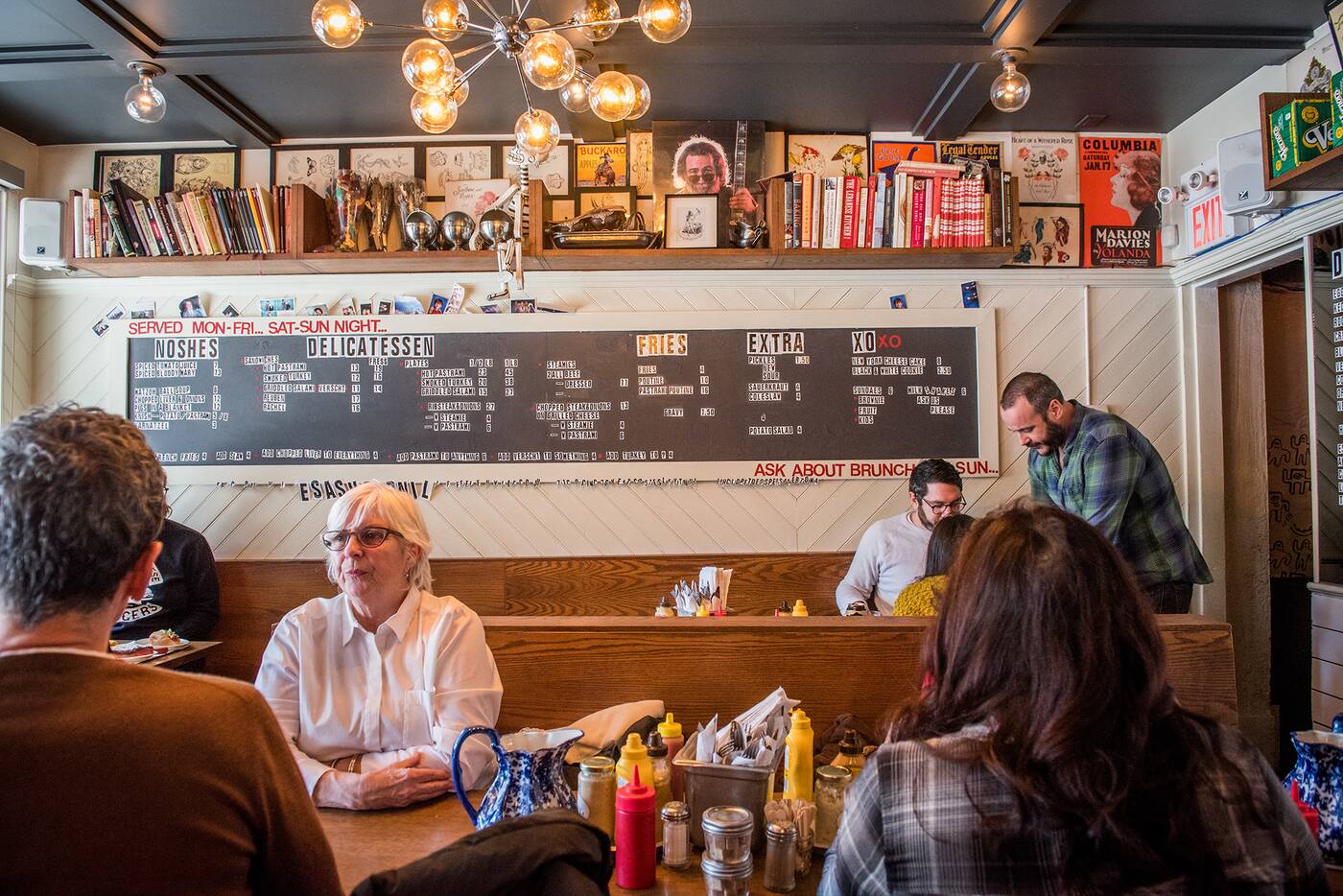 Menus are written out in stickers on mirrors and a long blackboard on the back wall. 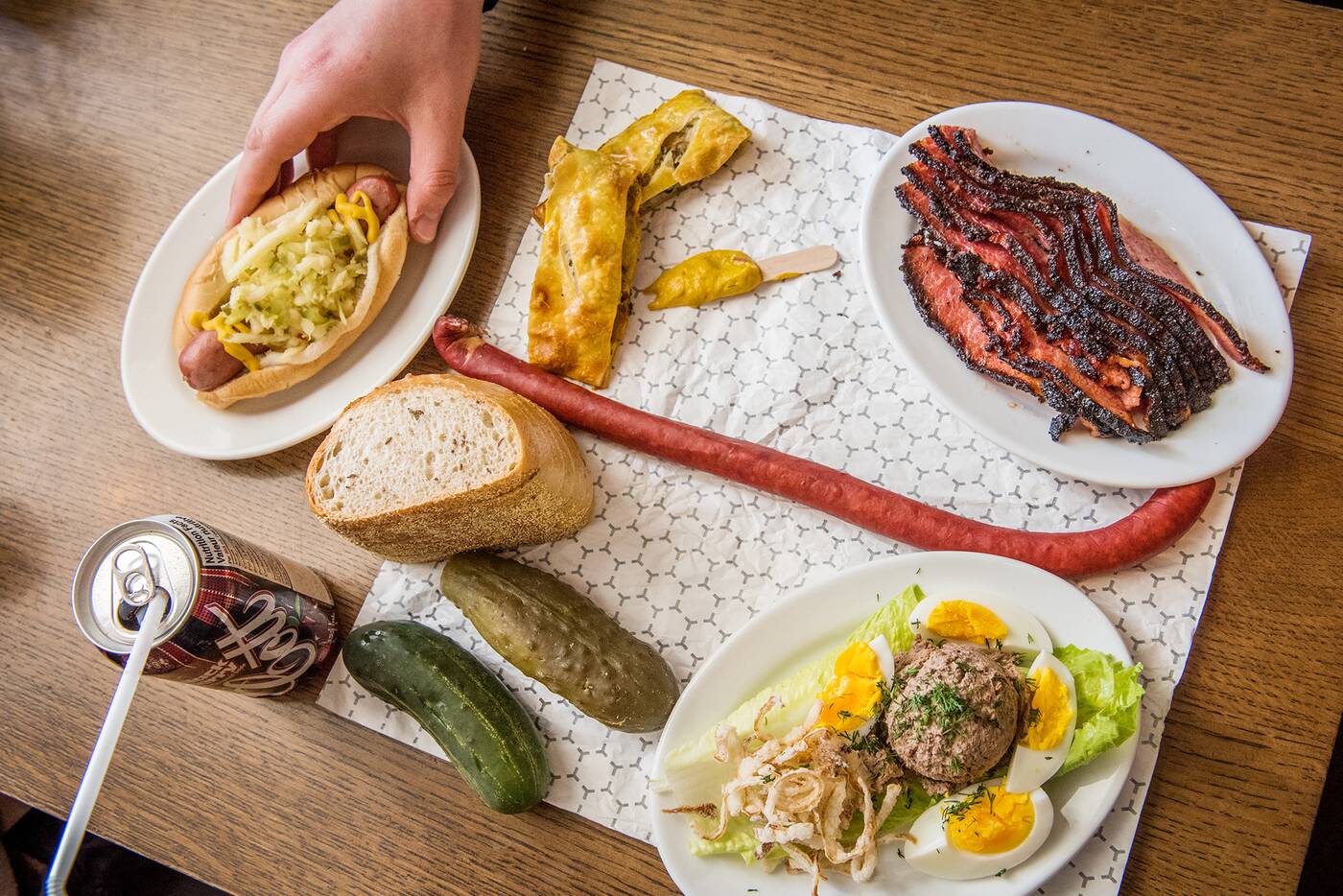 Steamies are $11 for two all-beef dogs in the snappiest veal casings dressed with straight up French’s yellow mustard and crunchy, acidic cabbage relish on good old Wonderbread. An ode to a late night Montreal classic, lovers of Toronto street meat need this in their lives. 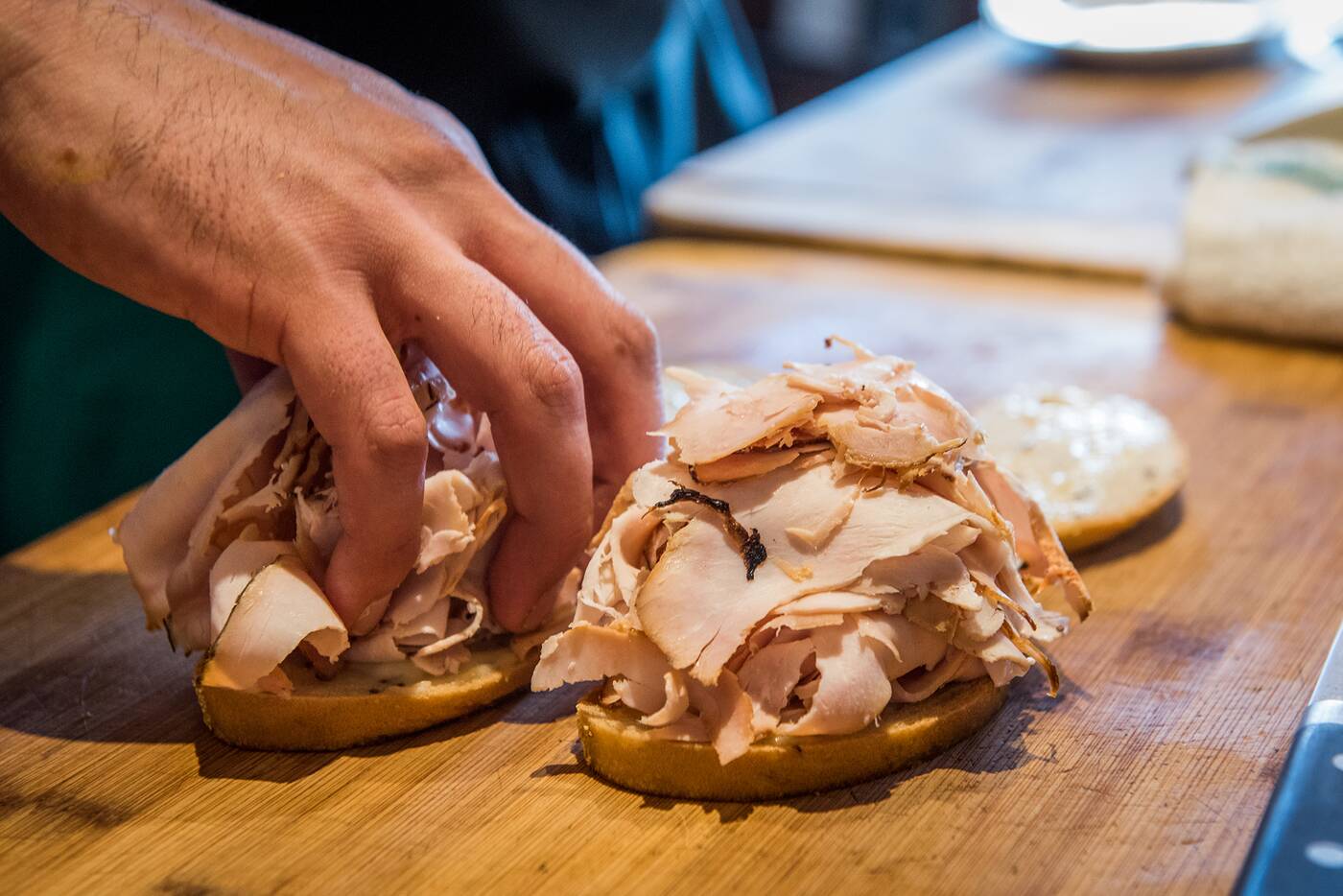 In true deli style you can get smoked turkey ($12) and griddled salami ($11) sandwiches as well as obligatory Reubens ($17). 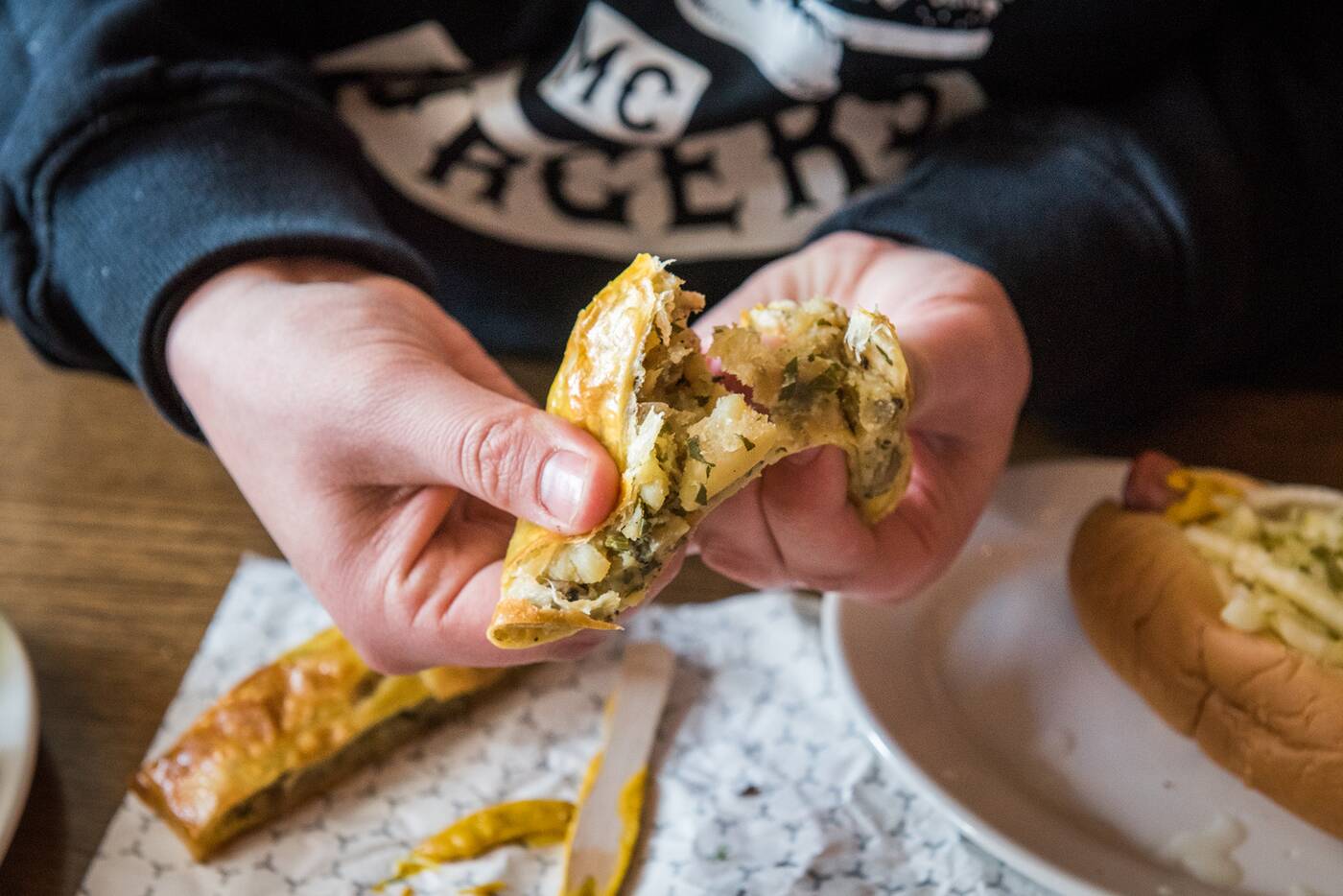 Potato knishes ($5) wrap a simple, relatively bland filling of potatoes, dill, caramelized onion and parsley in flaky pastry. You’d probably never realize just from eating it that Rose and Wilder have actually been perfecting this basic delight for years. There’s also a pastrami version for $8. 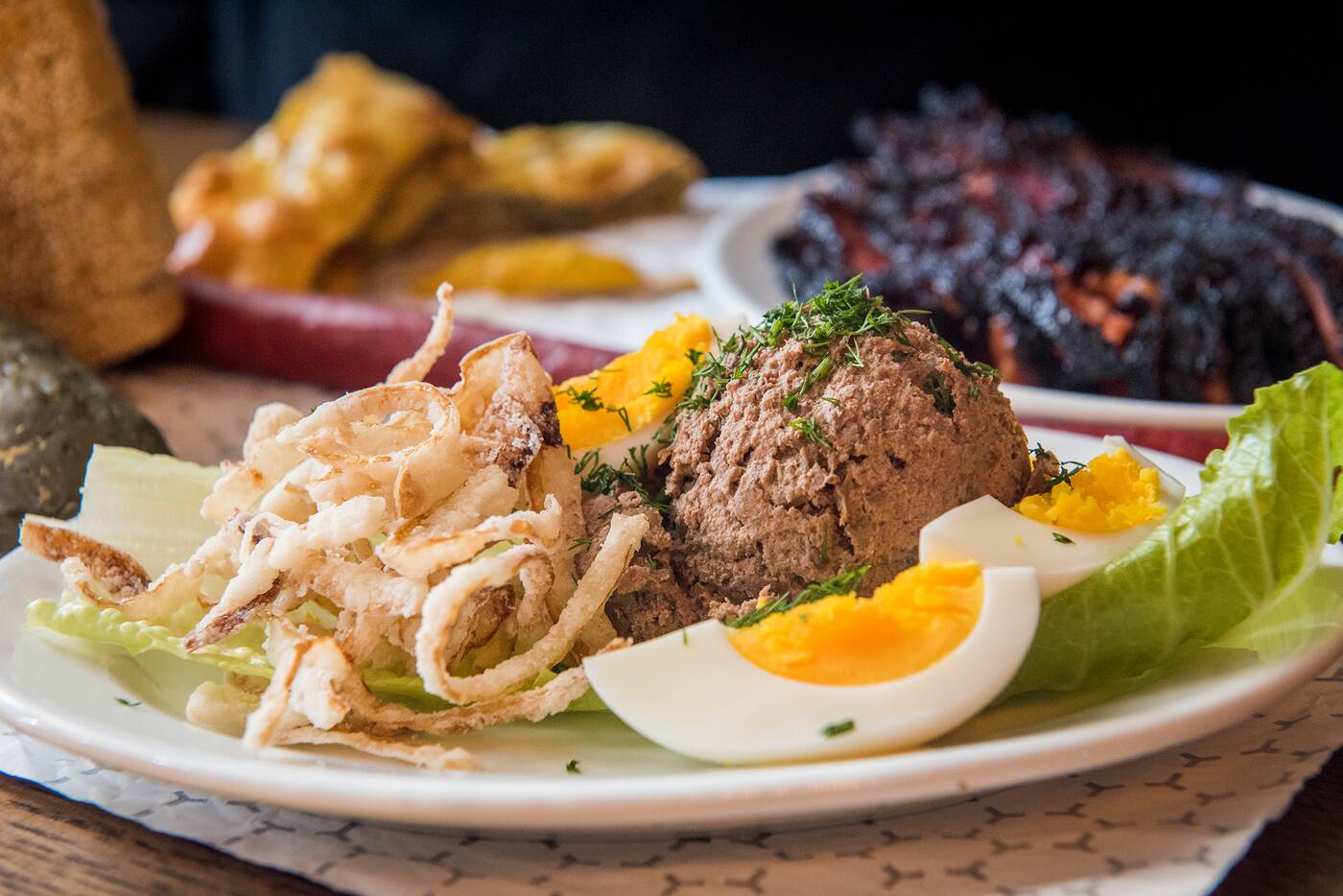 Chopped liver ($12) definitely does not live up to the saying “What am I, chopped liver?” because this dish is tough to ignore. A creamy scoop of savoury chopped meat that’s more like a slightly spicy, rich pate is accompanied by crispy onions that lend crunch and sweetness as well as boiled egg slices for creaminess and an extra retro touch. 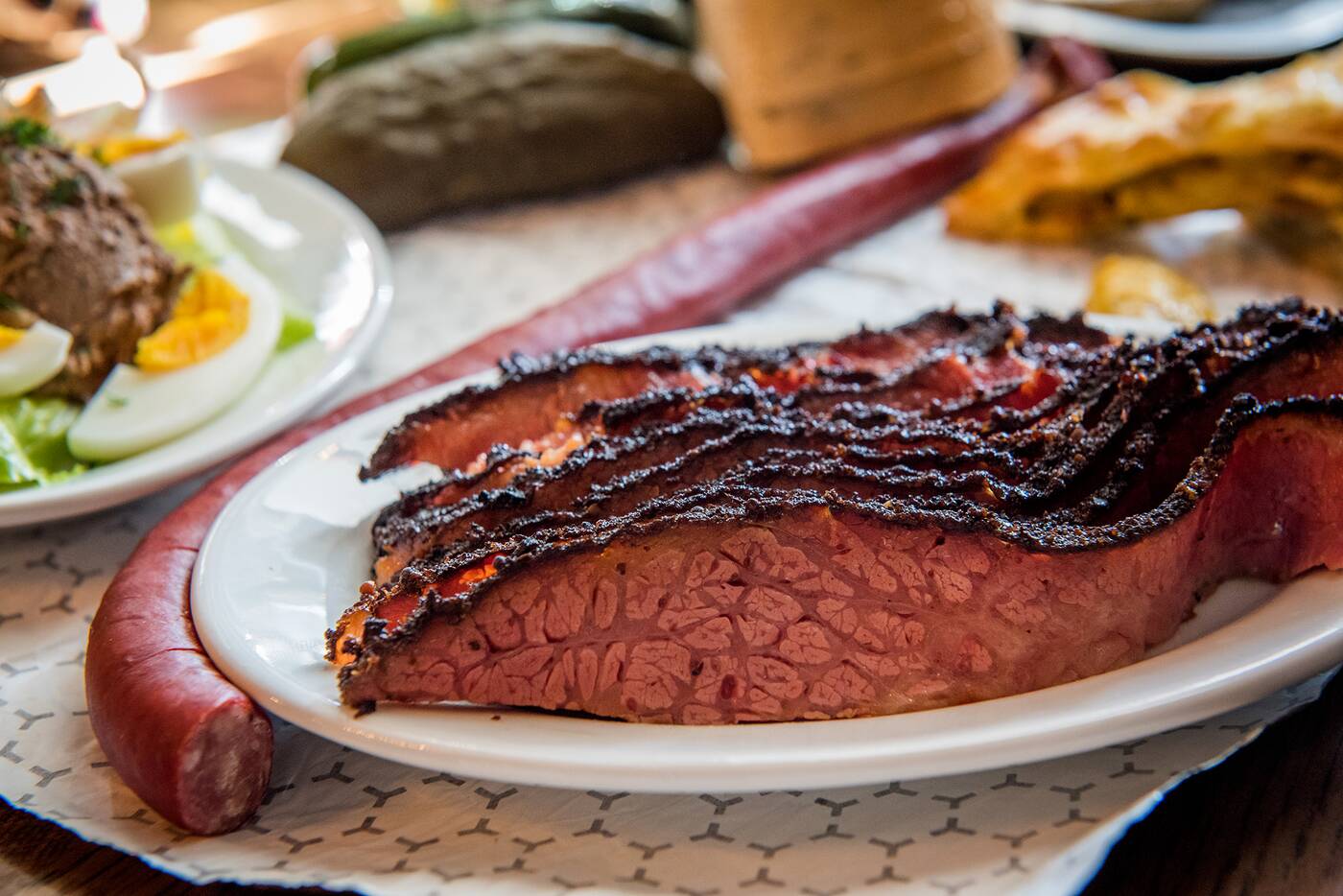 A half-pound hot pastrami plate will set you back $23 but it’s worth it. Someone has been pickling their meat to their specifications for a long while (who also makes the long, dry Karnatzel sausages). 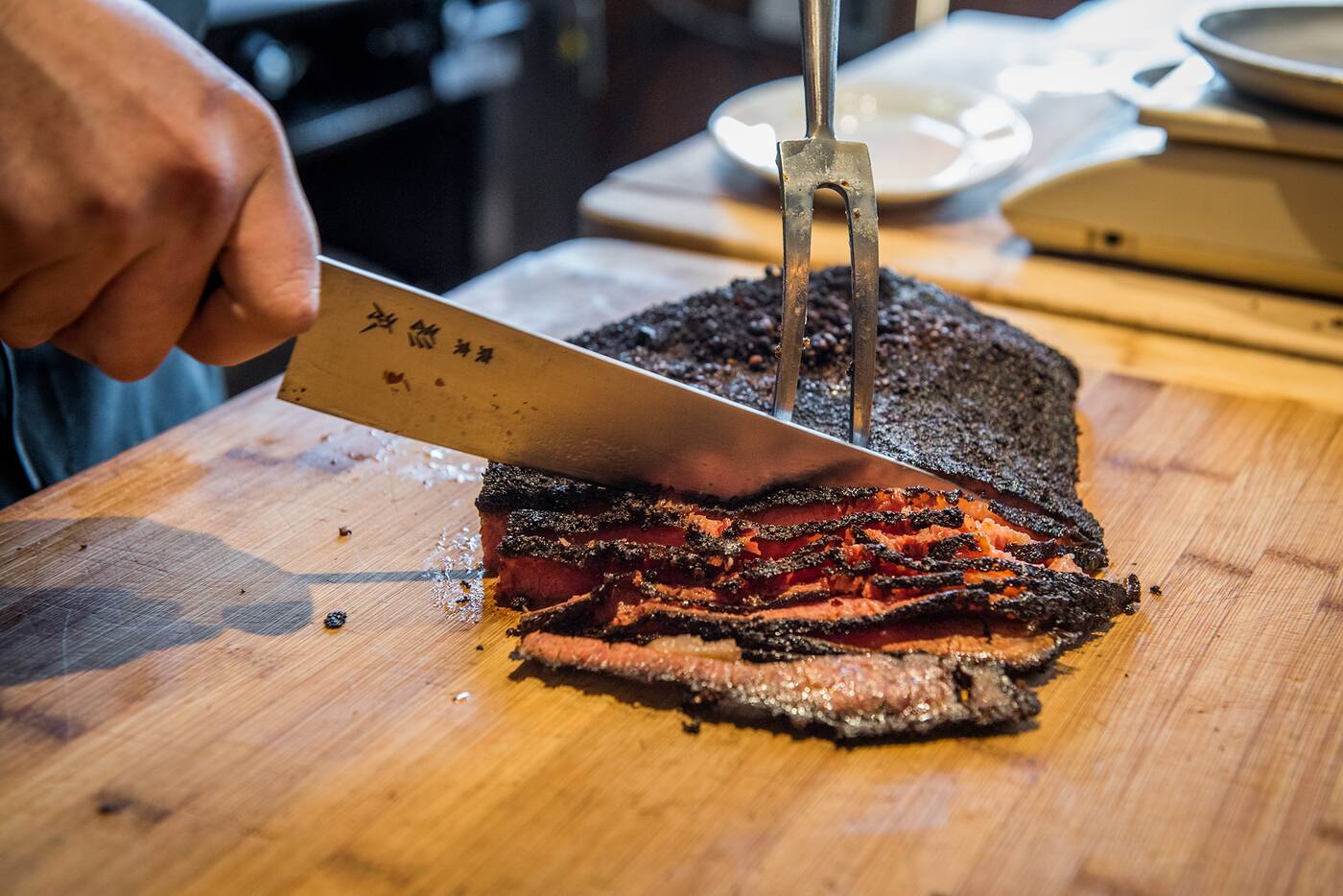 The crust contains pastrami spices, chili and brown sugar that gives it bite and sweetness. They let the pastrami sit for thirty-six hours before smoking it themselves over at Big Crow for four or five hours, mostly using fruit wood. 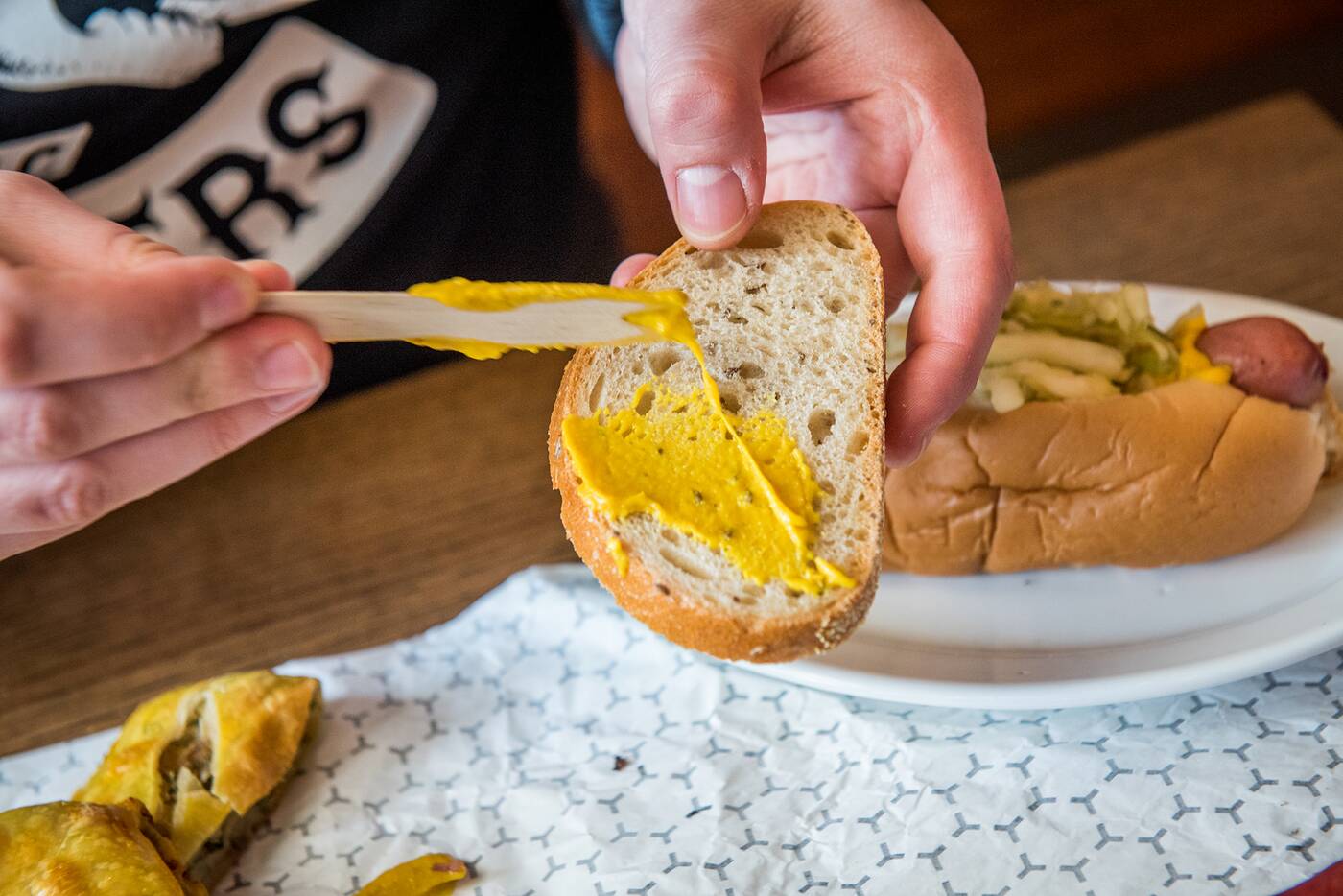 It goes great on a slice of rye smeared with one of a variety of hot mustards. 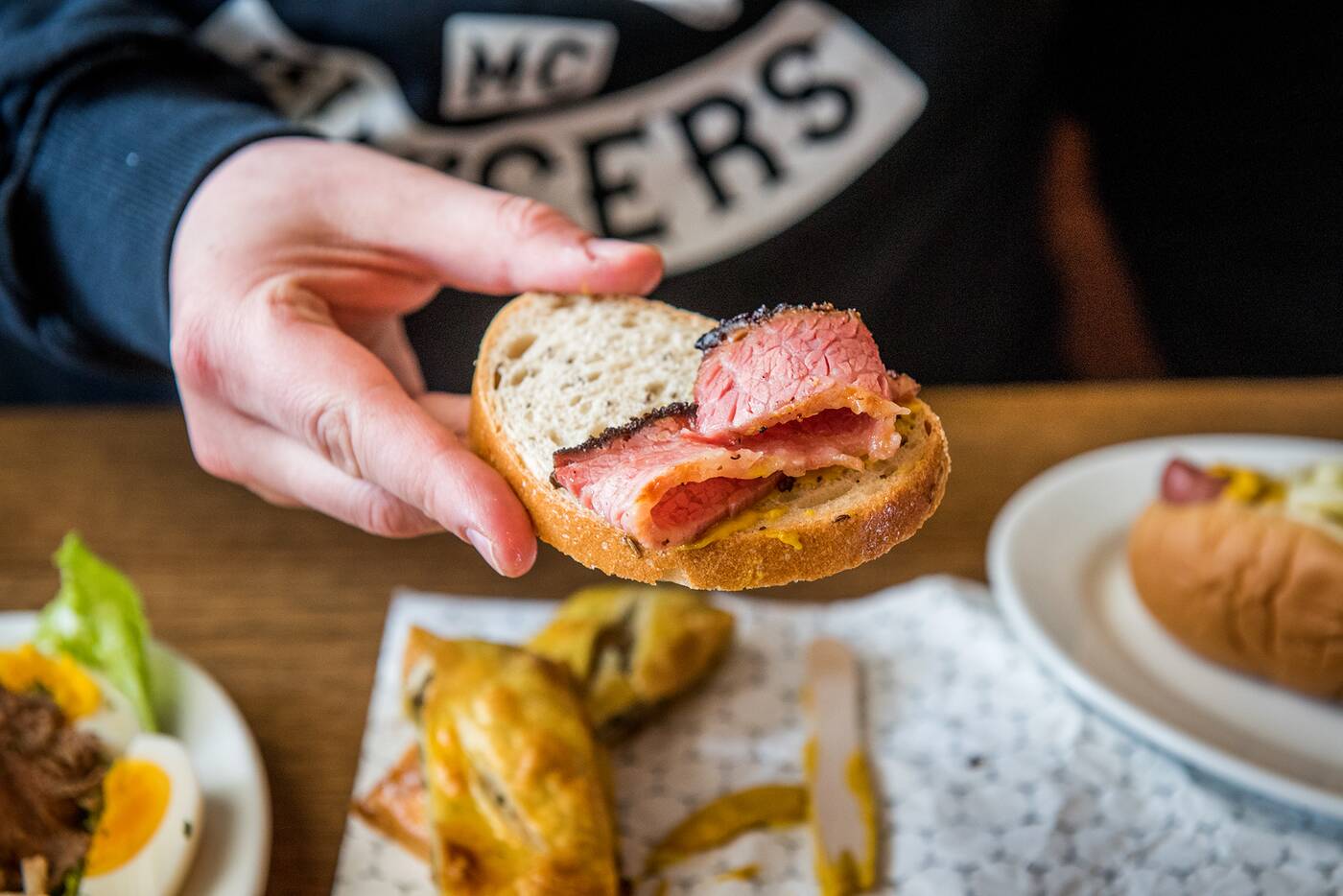 I like the provided Colman’s: similar to a Keen’s, it’s spicy, a little darker and grittier. 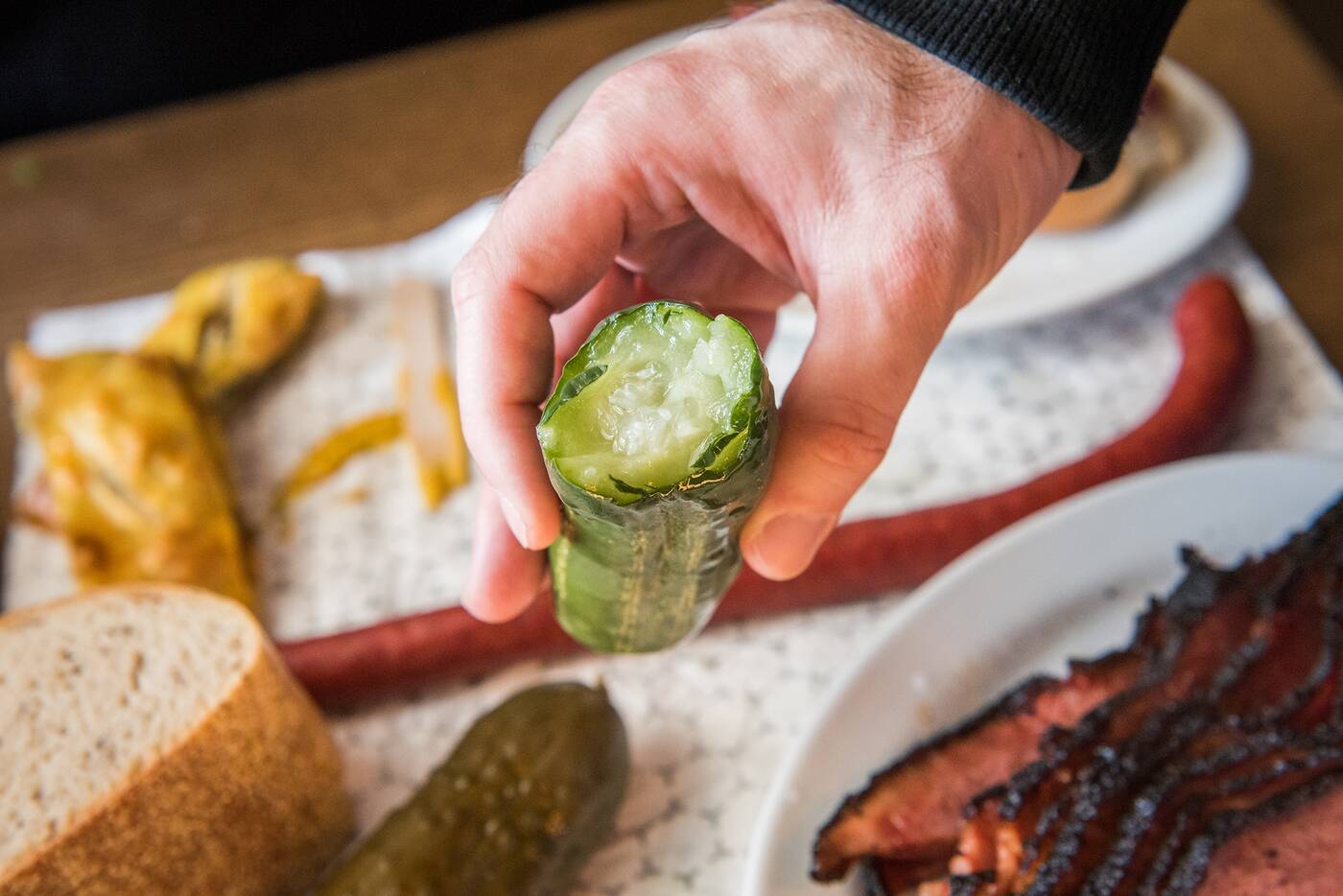 Tymek’s pickles from Etobicoke are also a must on the side with this, sour ones that are more classic and new pickles that are closer to cucumbers. 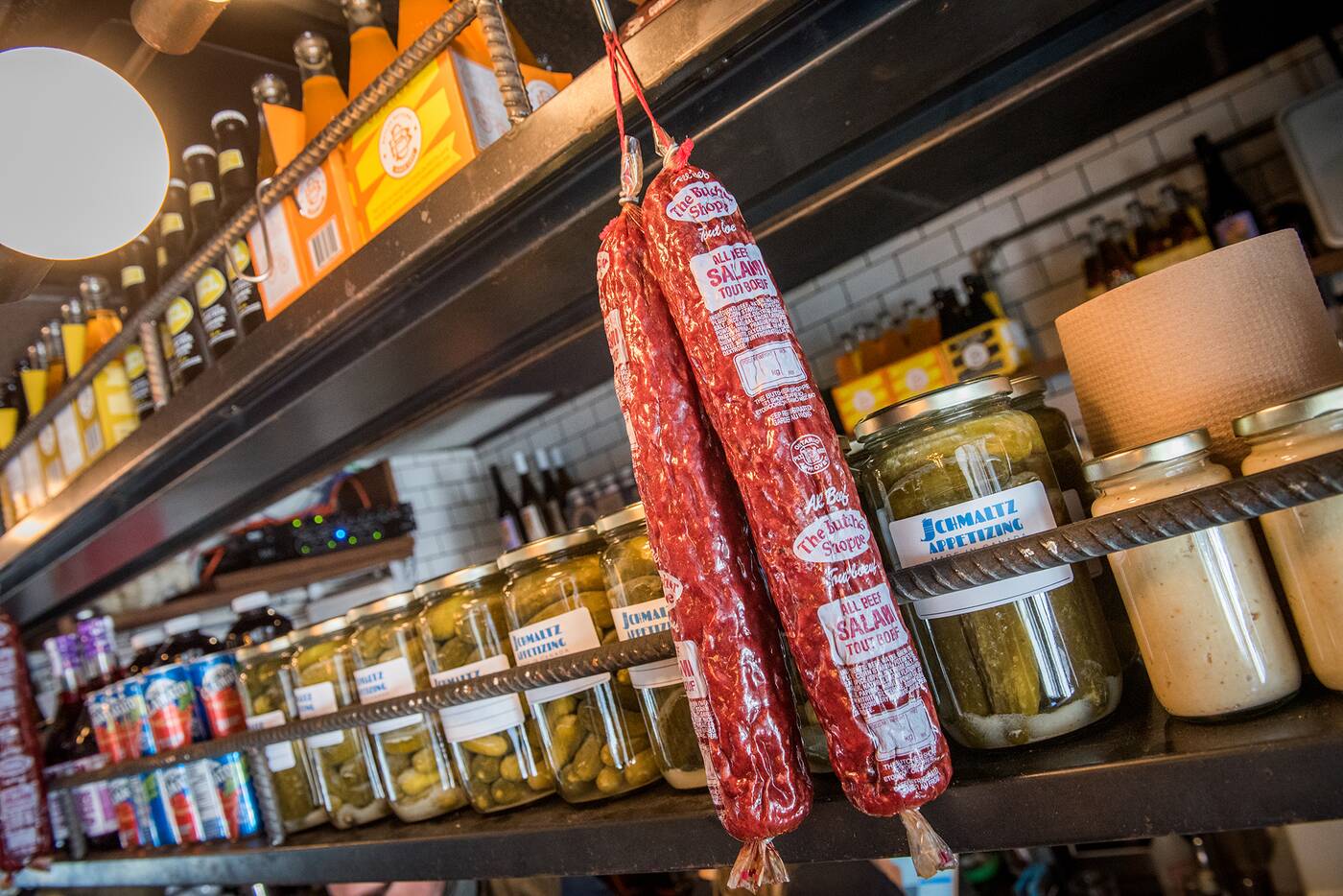 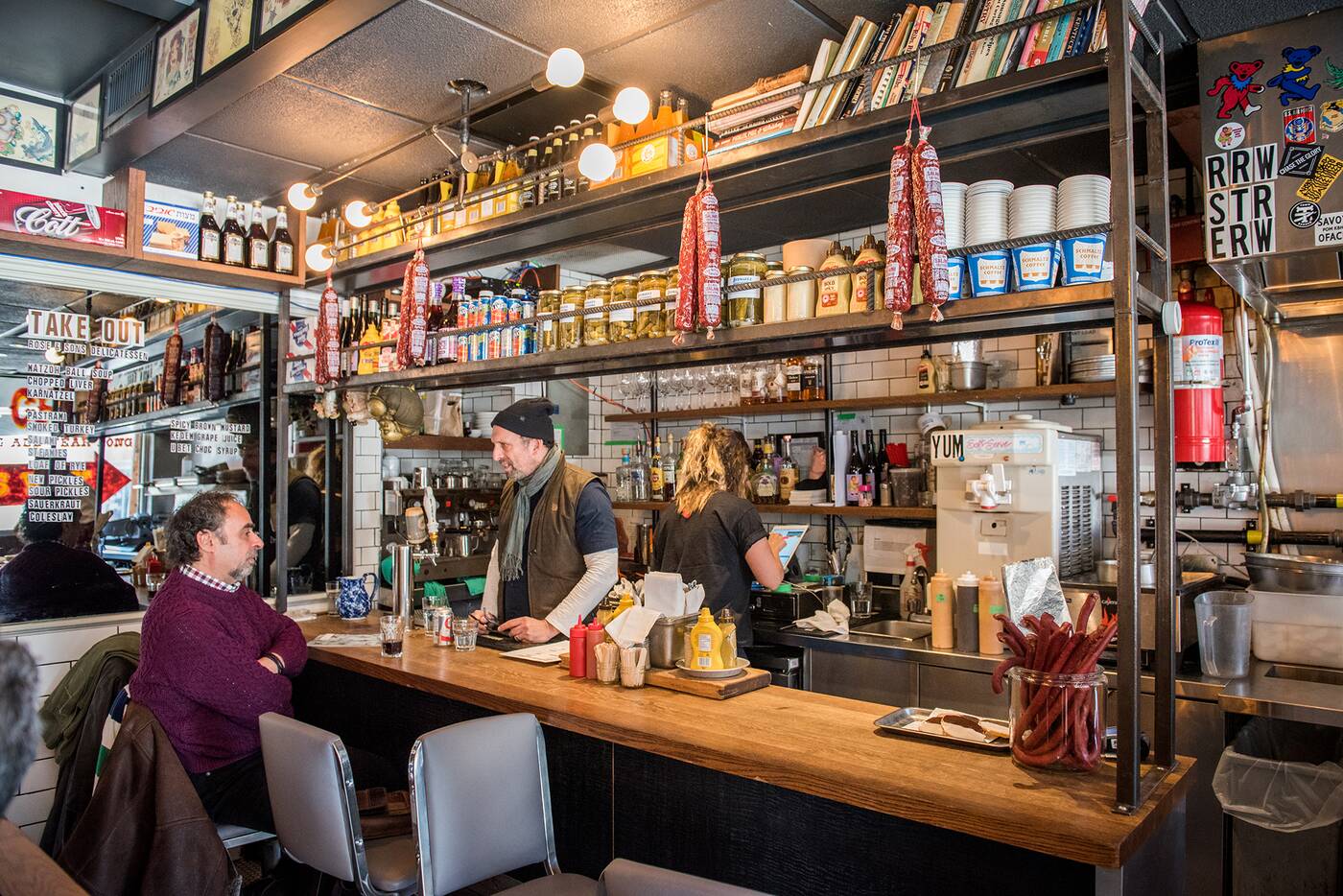 Other restaurants in their humble Toronto mini-empire include Schmaltz Appetizing, Big Crow and Fat Pasha. 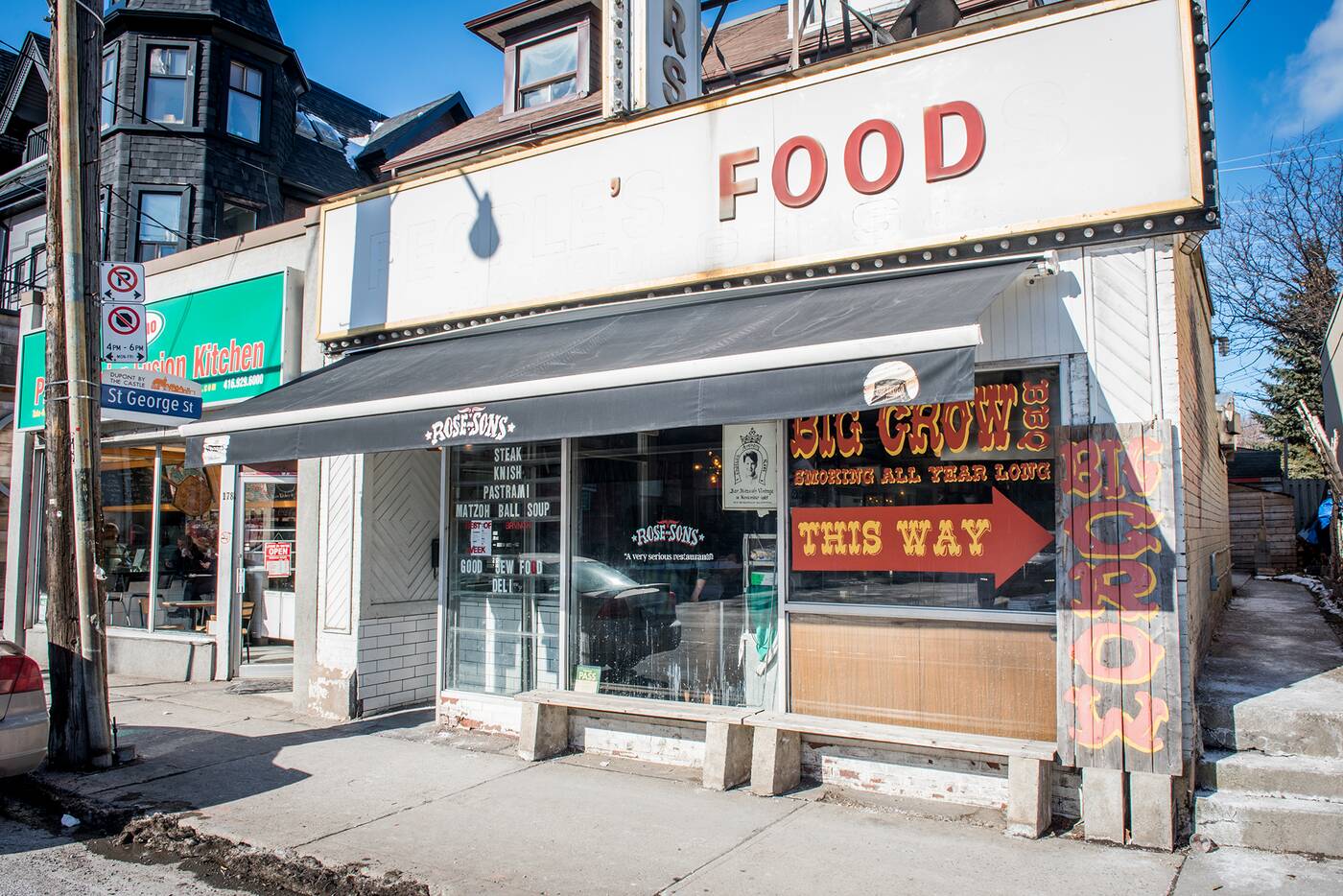