Annex area residents looking to sop up their hangovers have one less place to brunch as of yesterday when People's Foods closed its doors after being in business for almost 50 years. "I told the landlord not to raise the rent, that it was too much, but we disagreed," owner Kathy Tsatsanis told me earlier this morning as staff cleaned out the vintage diner, which is still adorned with retro jukeboxes at each table.

Tsatsanis, who's owned the restaurant for the last eight years, refuses to pay a rate that she believes is unreasonable for the small space on Dupont at St. George. "It's sad because the customers were like a second family," she says of the decision. "If the rent was lower, we'd stay."

It's a pretty standard business story, but that's hasn't numbed the pain for the restaurant's regulars, many of whom stopped by on Sunday to say goodbye and order a final bacon and eggs or club sandwich. "I think this is a real loss for the Annex, especially for those who made People's a regular habit on weekends," wrote David Silverberg, Managing Editor of Digital Journal and a restaurant regular, in a note to us about the closure. "It's hard for me to name a place on Dupont that could give off the same atmosphere found in People's."

Despite shorter hours, People's always had way better food than 3 a.m. hot spot Vesta Lunch, which is what made it something of an Annex institution.

Fortunately for fans of the restaurant, the plan is to reopen at some point. Although Tsatsanis tells me that she's having some trouble with her hands, she'd like to find another location in the neighbourhood at some point. "We won't move far," she says.

Still, without a concrete timetable, the mood at People's this morning was understandably sombre. The restaurant's lease is officially up June 1st, but it sure looks like neither side is budging. And so another old-school Toronto diner bites the dust. 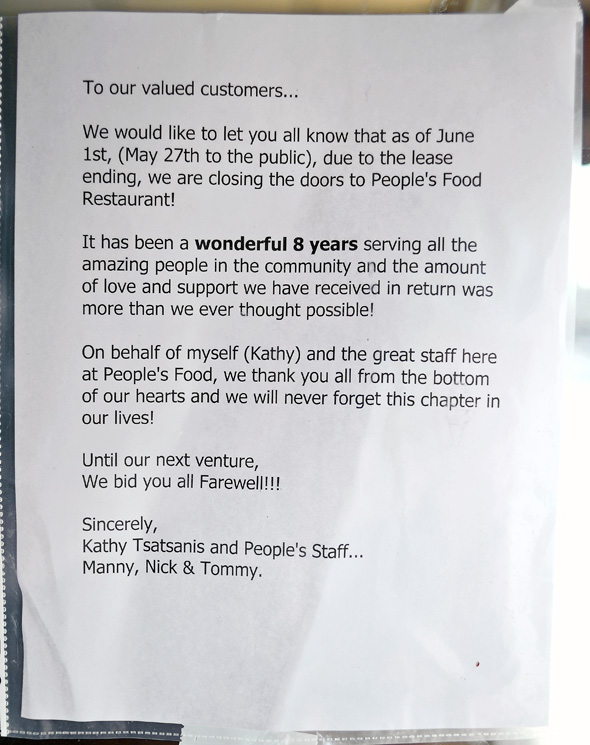