Rawlicious, one of Toronto's more well-known purveyors of raw, vegan food, has opened a new location in Yorkville . A far cry from the Junction neighbourhood that houses the original eatery , Rawlicious is now making its healthy dishes available to a whole new crowd.

The Cumberland Street location is notably a little less hippy, a little more Louis Vuitton, but the fresh, delicious food and laid-back vibe remain the same. Sure, many turn their noses up at the idea of raw food, assuming it's nothing but a pile of cold vegetables on a plate, but let me assure you, this restaurant's offerings are much more.

At this time of year, when holiday parties and seasonal festivities are in full swing, most of us tend to indulge in copious amounts of rich foods and holiday treats, and rightly so. But finding myself in a haze of eggnog cocktails and way too many baked goods, a good healthy meal seems very appealing, perhaps the antidote to my glutton's guilt, and so I decide it's time to do what my mom always tells me, and eat my vegetables. 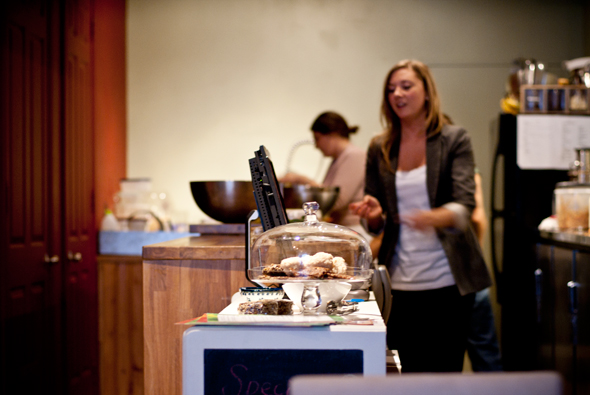 Nestled in the first floor of a brick house, the small space is just one room with an open kitchen in the back, tables lining each side, and a little seating area with two cozy chairs in the front window. Paintings by local artists decorate the walls, and though this location is more upscale in appearance than the original, it still maintains that feeling sort of like you're eating in someone's house which I remember from the junction restaurant. The only aspect that's a little disconcerting is the spa-like music that plays overhead and adds a kind of awkward, quiet element to the room. 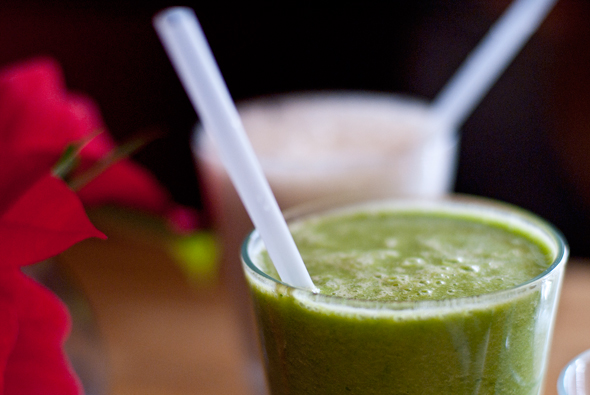 The menu here is the same as the other Rawlicious, and after some suggestions from our server we decide to start with two of the smoothies ($6.50). My friend opts for the tropical green, a bright green beverage consisting of spinach, kale, banana, mango and pineapple. Curious to see what a vegan version of eggnog might taste like, I order the eggnog smoothie, made with nutmilk, banana, vanilla, date, nutmeg and cardamom. The drink tastes of warm spices, and though not much like the real thing, it's a delicious shake. 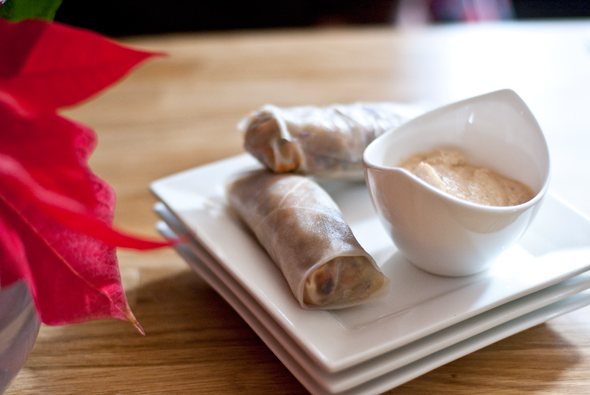 We start with the spring rolls ($6), a mix of finely chopped veggies in rice paper wraps (the only non-raw item on the menu - other than things like vinegar and maple syrup). These tangy little rolls are stuffed with fresh herbs and veggies such as cucumber, carrot, peppers and cabbage marinated in a vinegar mixture with lots of punch and tasting distinctly of spicy fresh ginger. They come sided with a well-paired, thick thai sesame sauce for dipping. 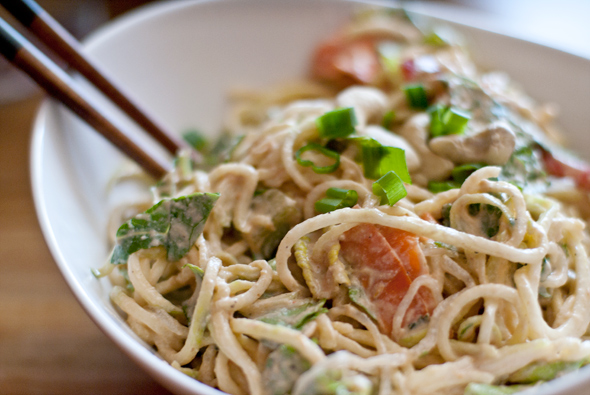 For my main I order the Pad Thai ($14), a base of raw kelp and zucchini noodles with chopped romaine, peppers, carrots, green onion and cashews, coated with the same thai cashew sesame sauce that comes with the spring rolls. The dish is served cold - as are all the items on the menu - which is different from the usual steaming hot, fried noodles I'm used to, but it really doesn't matter, this is great dish.

The thin, slippery kelp noodles mixed with the spiralled zucchini, slightly more dense in consistency, gives the dish a variety of pleasant textures, especially with the addition of the crunchy vegetables and creamy sauce. Those bold and distinctive thai flavours are still prominent, it's just a lighter, fresher version.

My friend orders the pasta bolognese ($13 - top photo), a raw vegan spin on the classic dish that may have Italian cuisine traditionalists cringing at the thought, but trust me, it's good. The same spiraled zucchini serves as the pasta, sauced with a mix of garlicky pesto and fresh tomato marinara sauce and topped with crumbled 'neat balls,' a sort of seasoned, nut-based creation that replaces the usual meat in such a recipe. The zucchini really transforms quite well into a pasta substitute, and the generous dish is definitely not lacking in flavour. 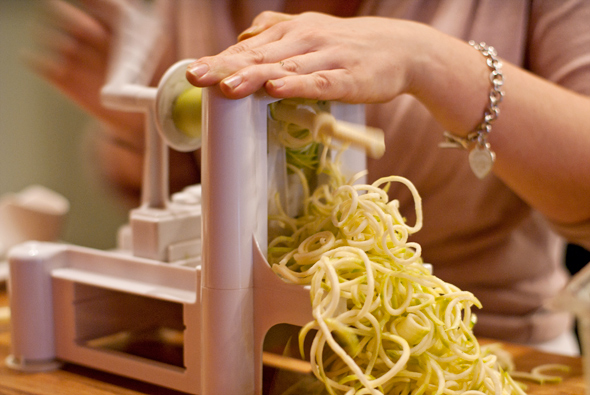 For anyone who's had much experience with raw or vegan food, they've probably noticed the prominence of the cashew in such style of cuisine. From savoury entrees to sauces, 'butters', and 'cheeses', sweets and baked goods, these nuts are the vegan cook's secret weapon, and versatile indeed. 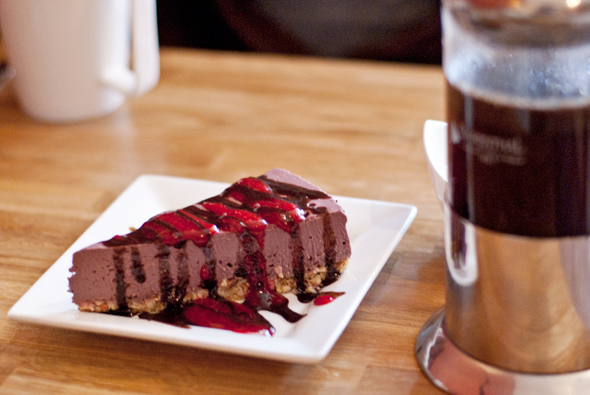 The cashew makes its final appearance of the meal in our dessert, a chocolate raspberry 'cheesecake.' This creamy confection is silky smooth, with a crunchy almond base, and drizzled with chocolate sauce and a wonderful, fresh raspberry coulis. The dessert goes nicely with some french press coffee, ($2) served with almond milk, of course.

I've often heard vegan food criticized for trying to make veg versions of already existing dishes rather than concocting their own original recipes, but some flavours just work together, vegetarian or not. And really, what sounds more appetizing, vegan pasta bolognese, or bowl of shredded zucchini with tomatoes and seasoned nut mixture? Exactly. 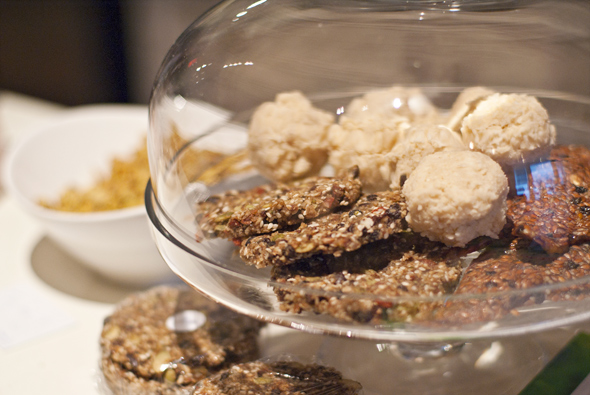 There are certain elements of raw food that hold many people back, like the temperature of the dishes, or the perception that such food is bland and unfulfilling. Rawlicious takes a healthy, sustainable concept and turns it into creative, intricate, made-from-scratch dishes that are full of flavour and very satisfying. I leave feeling full, minus that unfortunate I-just-ate-a-brick feeling that often ensues after downing a tasty, but much less health-conscious meaty meal, and I'll definitely be back for seconds. 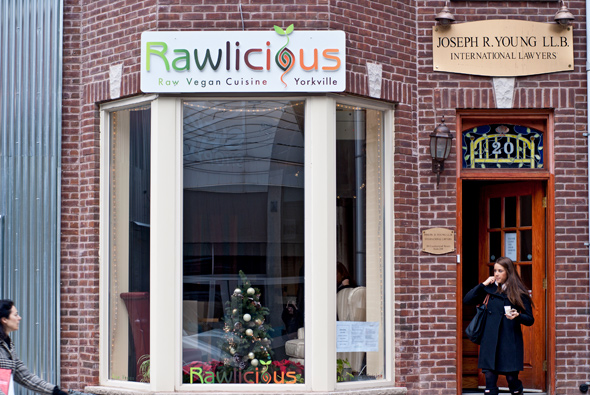