Based in New York City, this sleek Japanese brand already has two busy stores in the Big Apple, where it first opened in 2016. 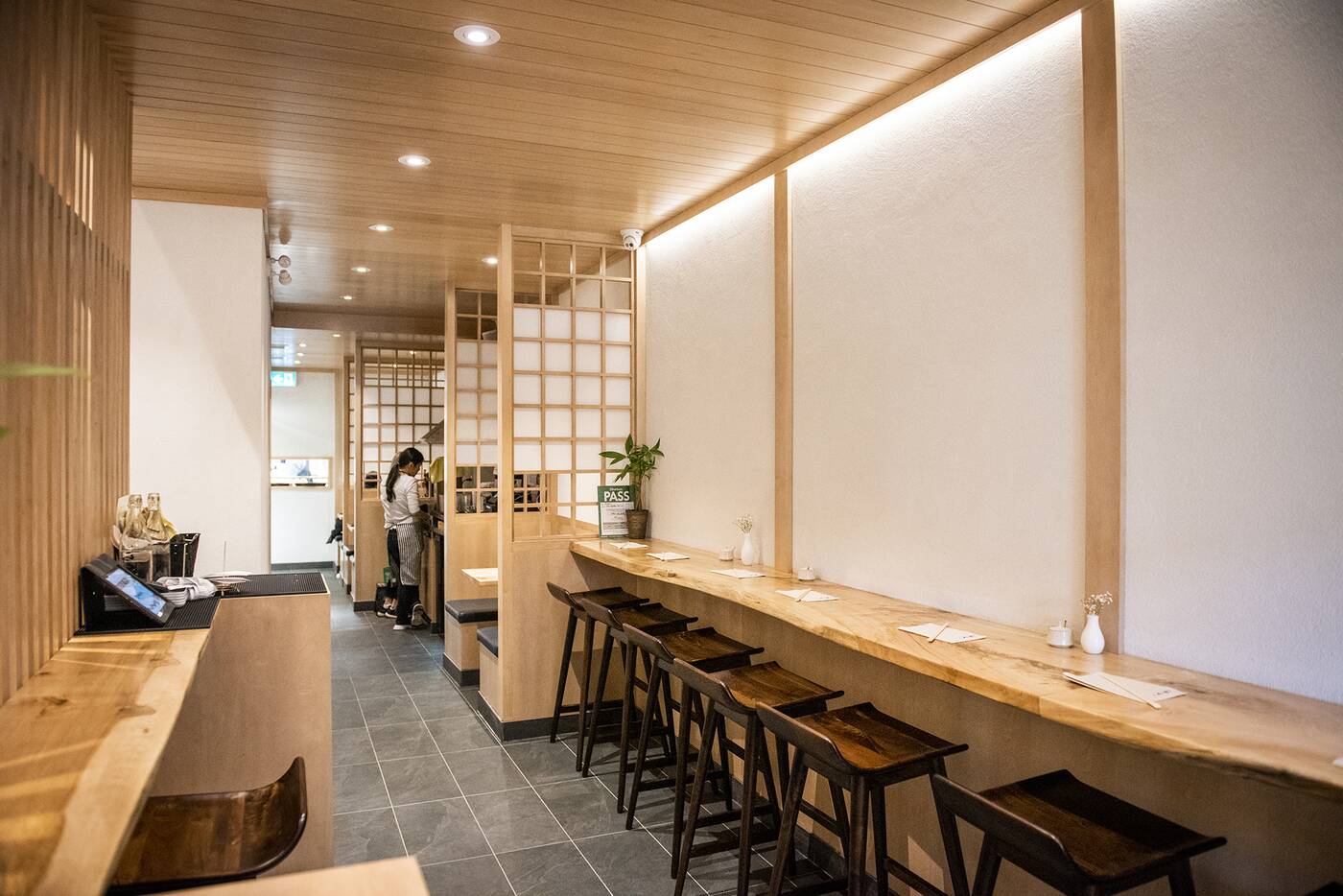 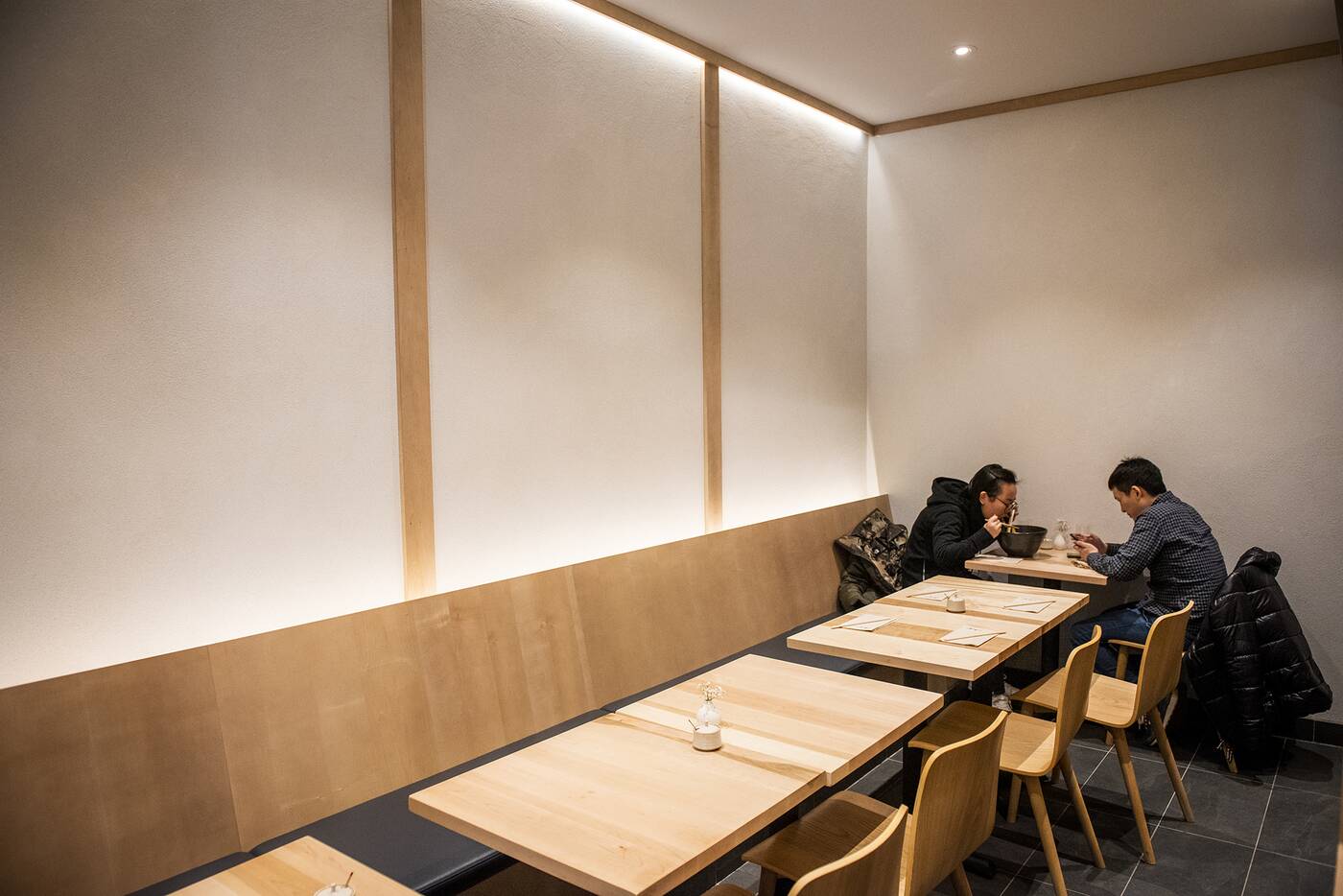 Toronto's first Raku location, according to the manager, most closely resembles its American counterpart in East Village, more than its wide-windowed store in Soho. 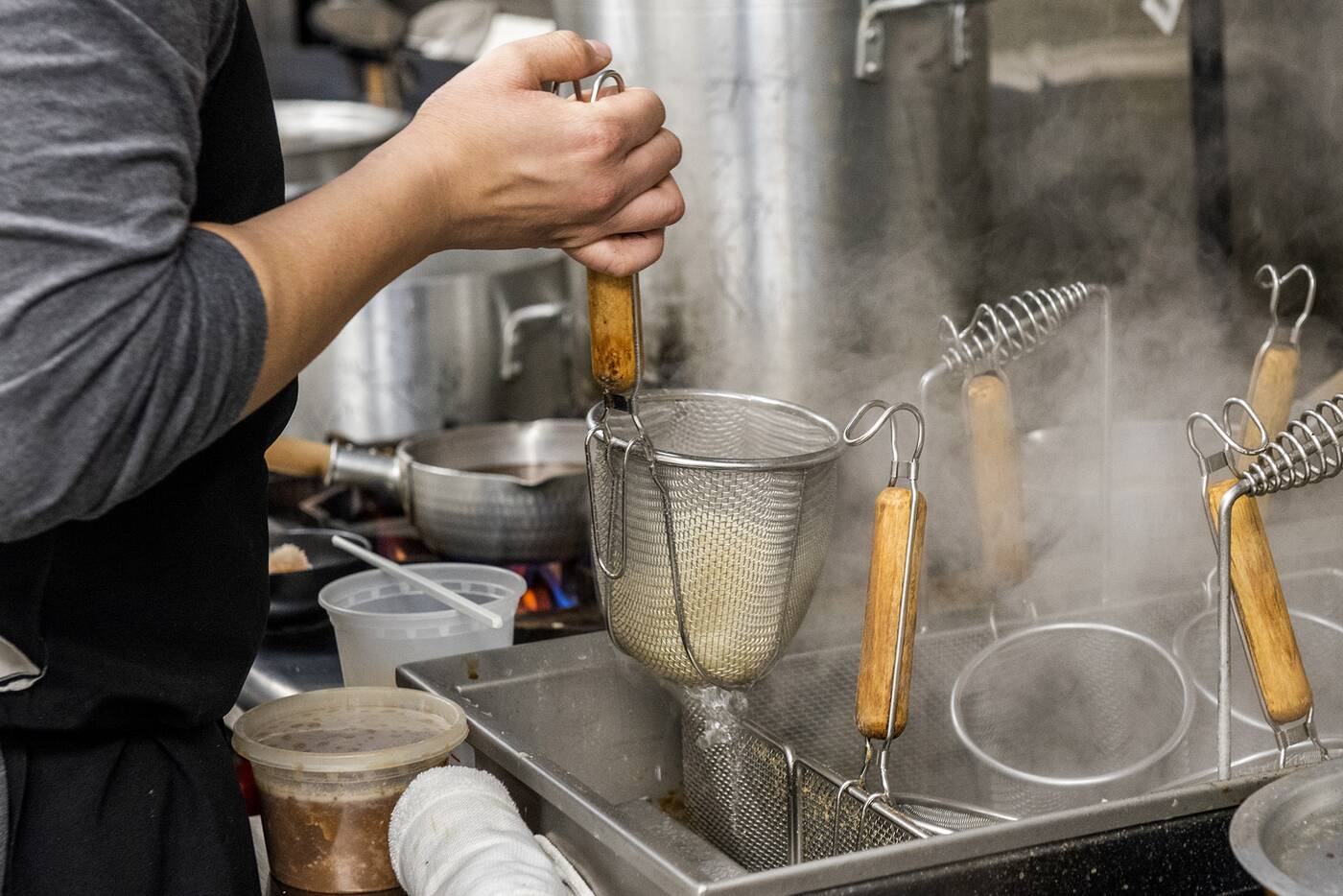 A plain white exterior leads into a subdued, woodsy interior: a peaceful reprieve from this busy part of Queen West. 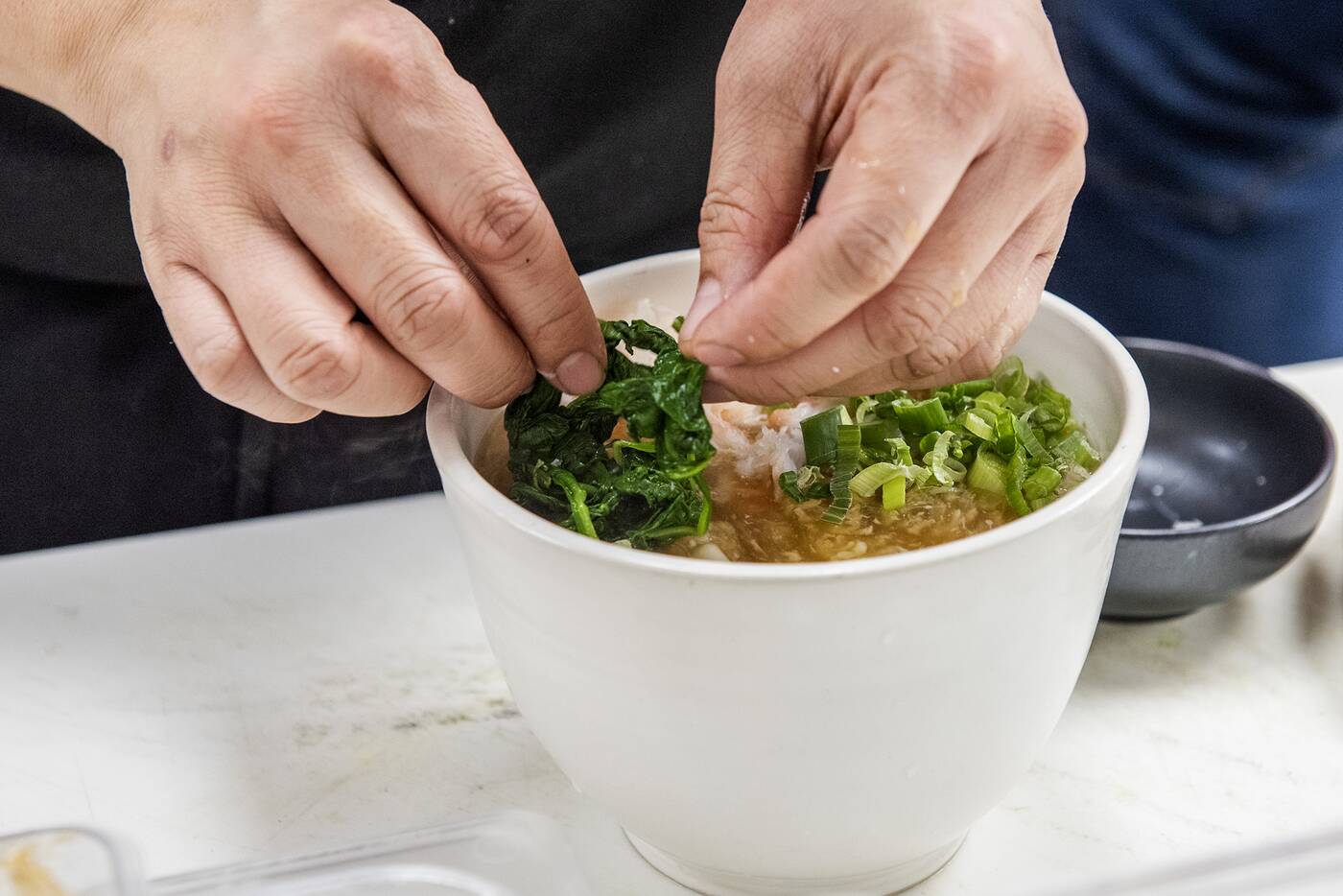 While the number of ramen shops in Toronto continues to grow by the day, there are few restaurants dedicated to Japan's plainer-faced traditional noodle.

Raku's thick, chewy wheat noodles come shipped directly from Japan, so it's a secret as to what makes these noodles so thick in texture. 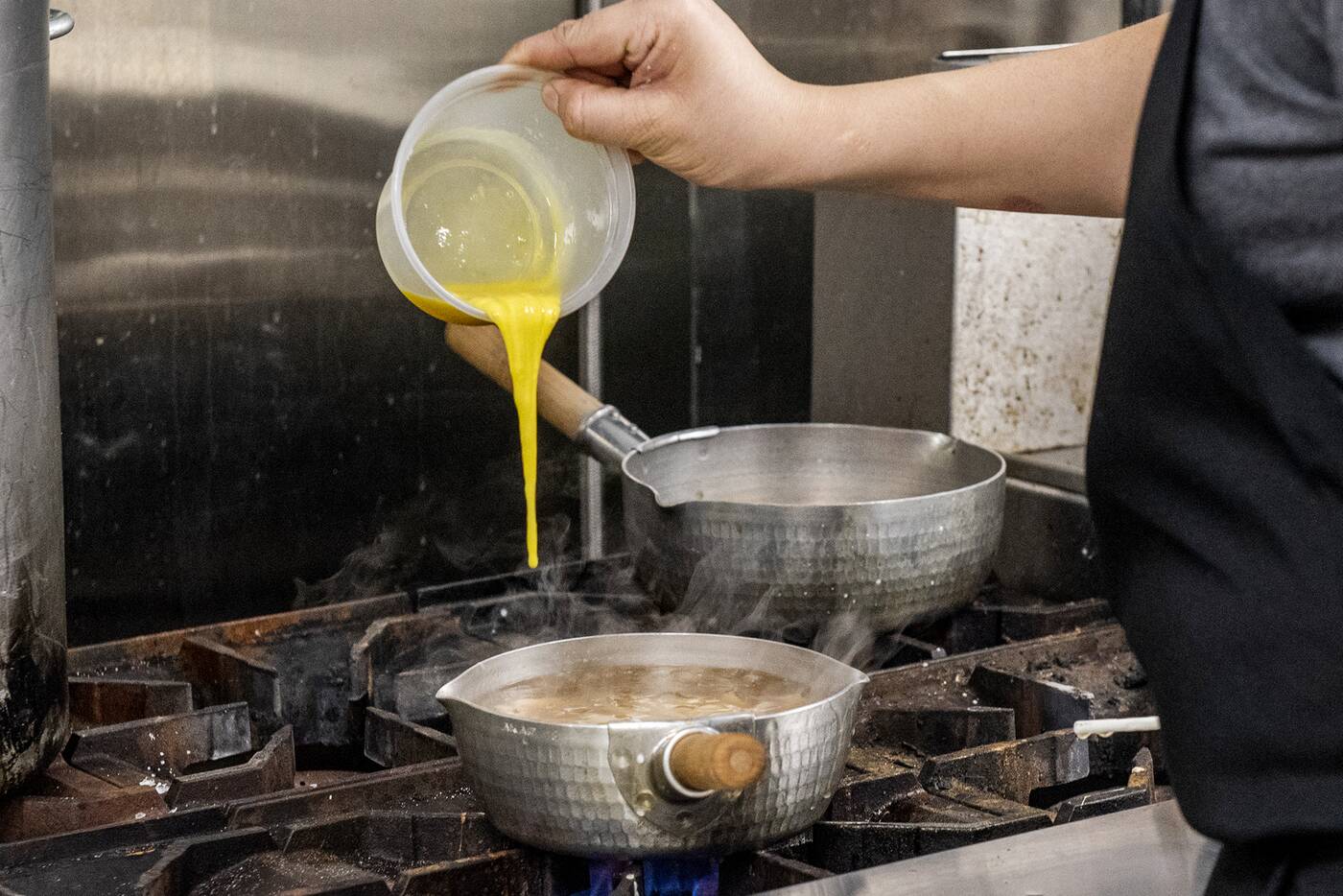 They definitely stand out as some of the firmest udon noodles I've tried, even managing to retain their chew after sitting in soup for a long time.

All udon comes in a fish-based broth, made from dried kelp and several different types of smoked fish including round herring, sardine, and mackerel. 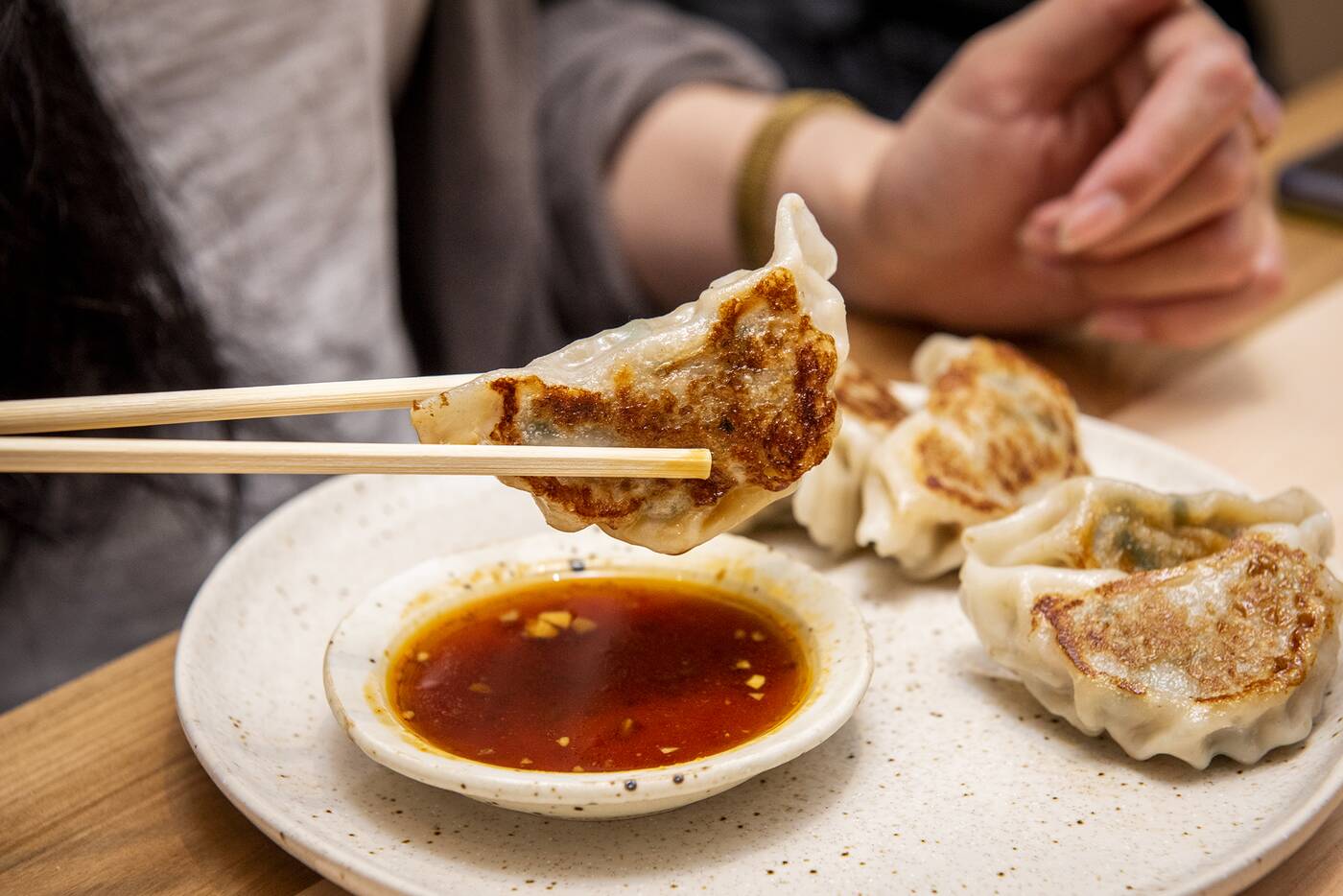 A list of light appetizers includes six exceptional gyoza ($8) with pork or veggie. 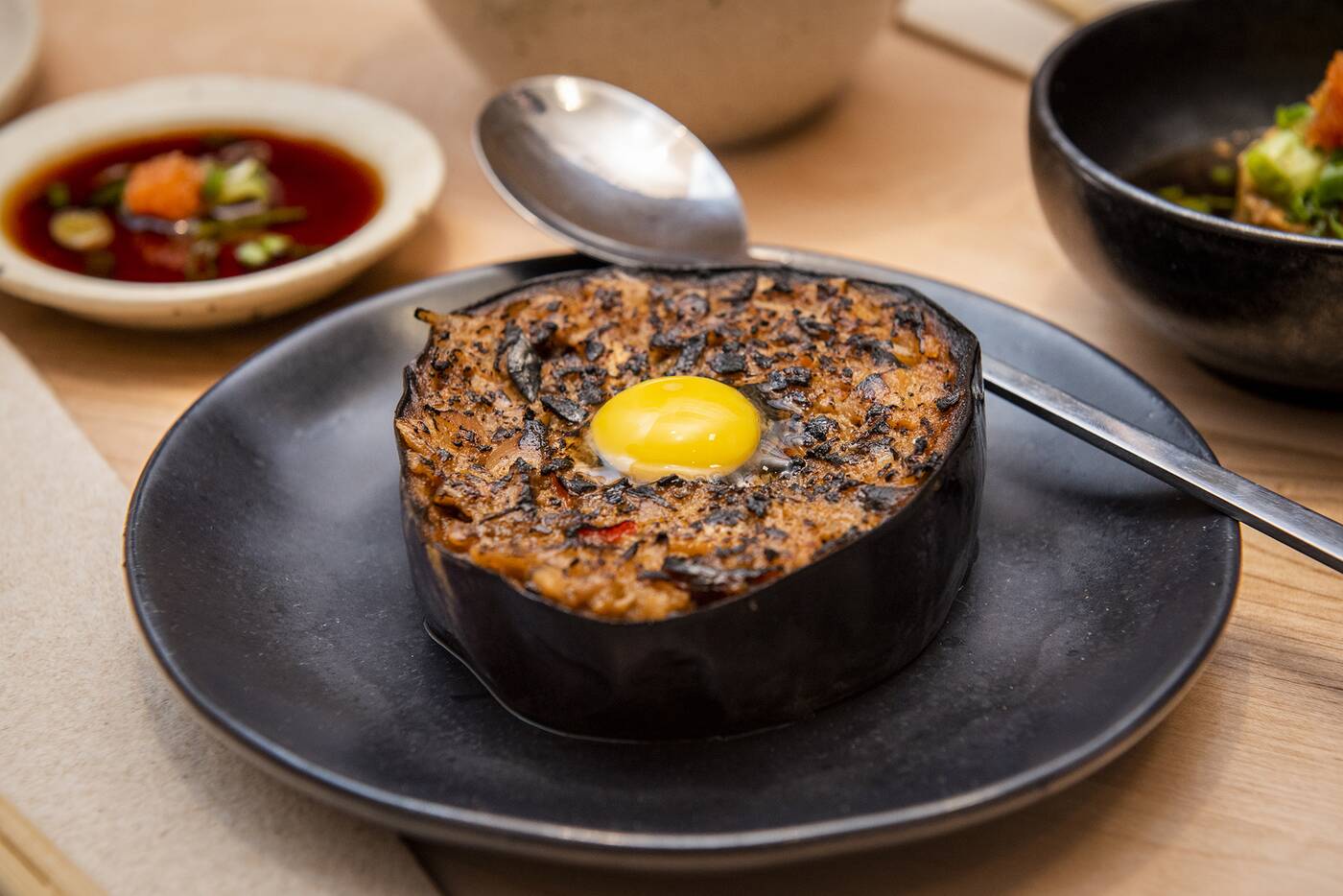 Yaki nasu ($8) is a smoky, salty round of eggplant, deep fried with a layer of spicy miso pork atop and raw quail egg, cracked in the centre.

Ankimo, which is monkfish liver ($8) comes served with scallion and ponzu sauce. 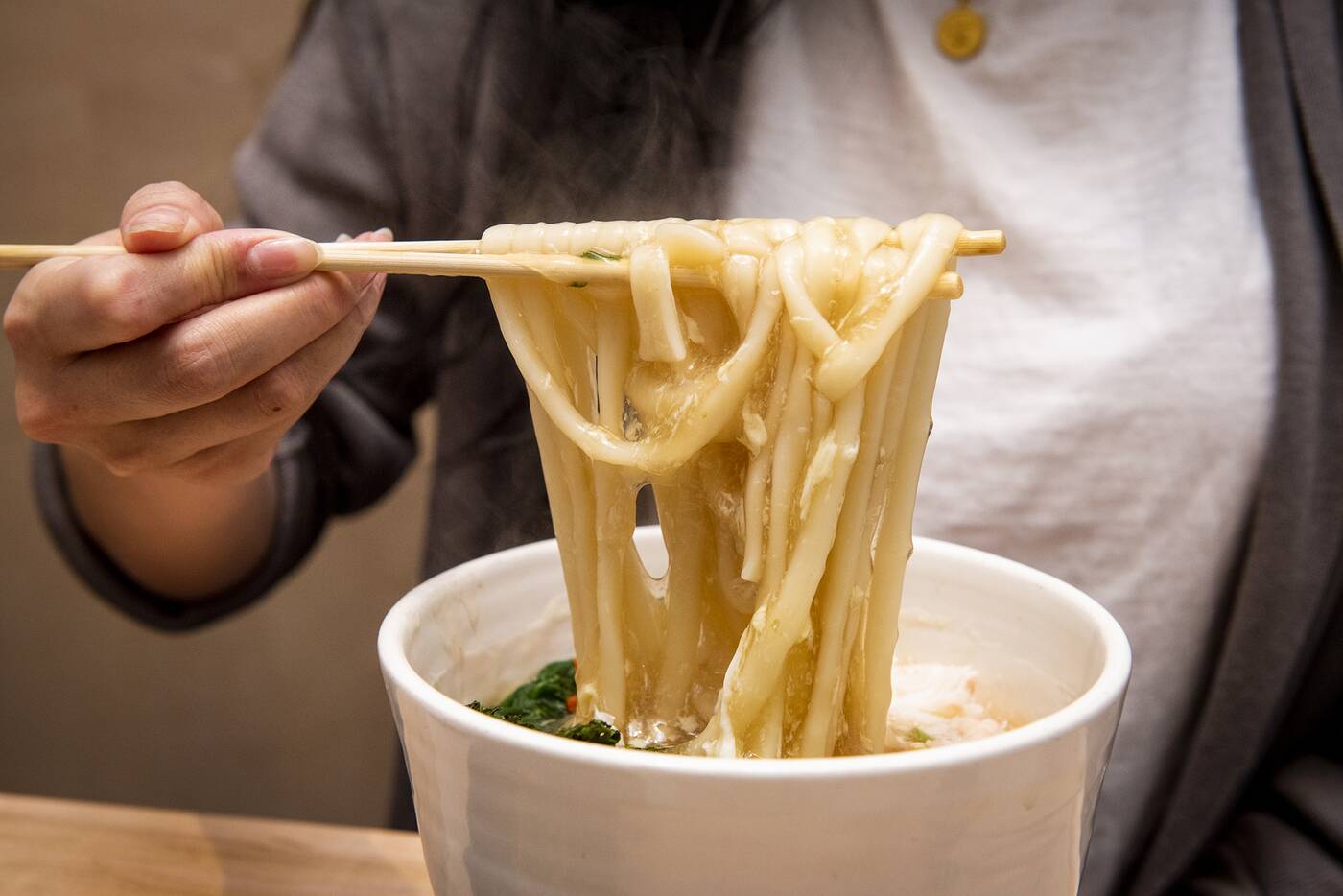 One of the most popular hot udon orders here is the kani ankake ($22), an insanely thick and gooey noodle soup served with chunks of real red crab. 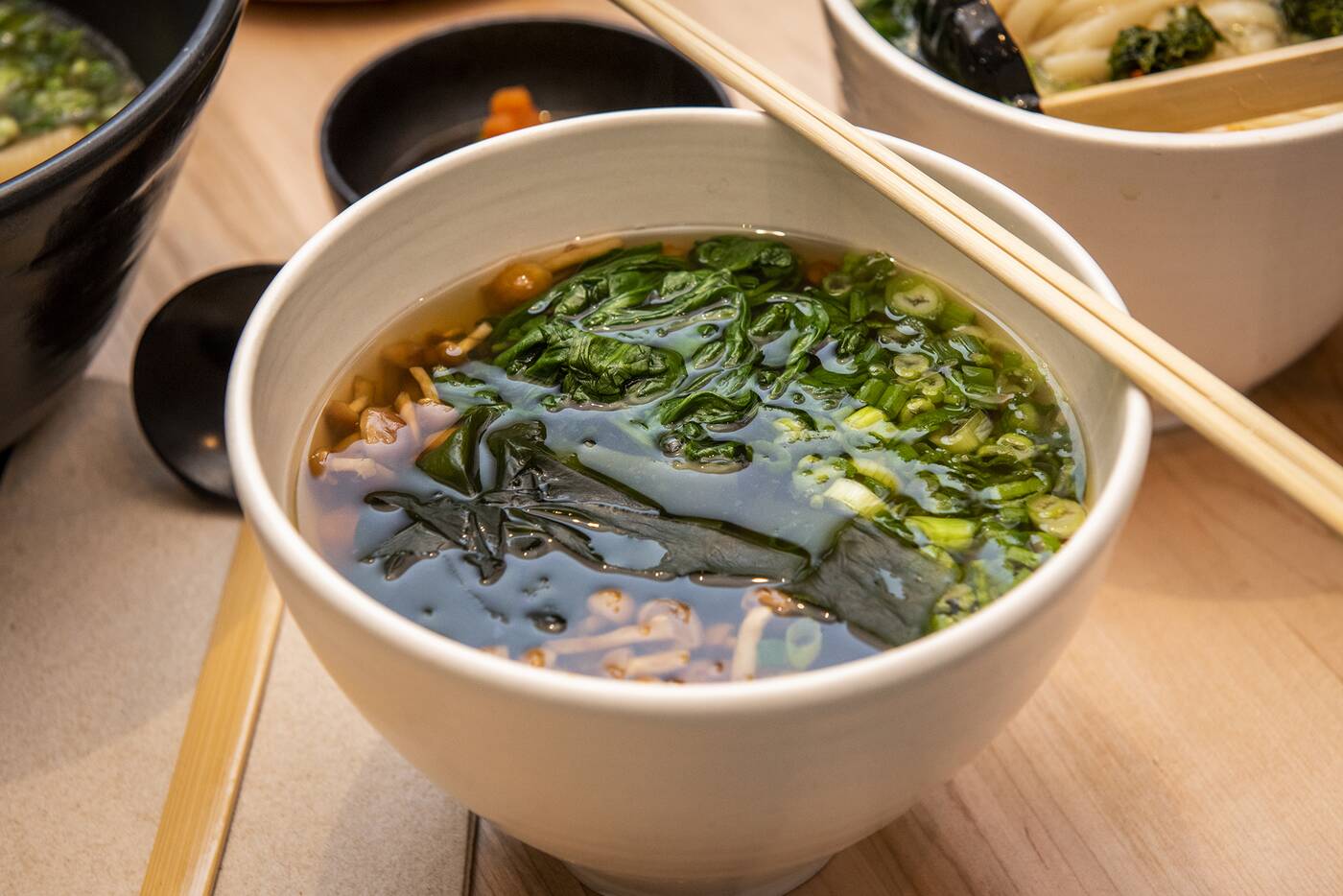 The nameko udon ($16) is a purely veggie bowl using nagasaki nameko mushrooms imported from a farm in Japan and wakame. Like all the meat-free options at Raku, it's served in a white bowl.

The honeycomb tripe is so good in the niku ($20), which also has beef short ribs. 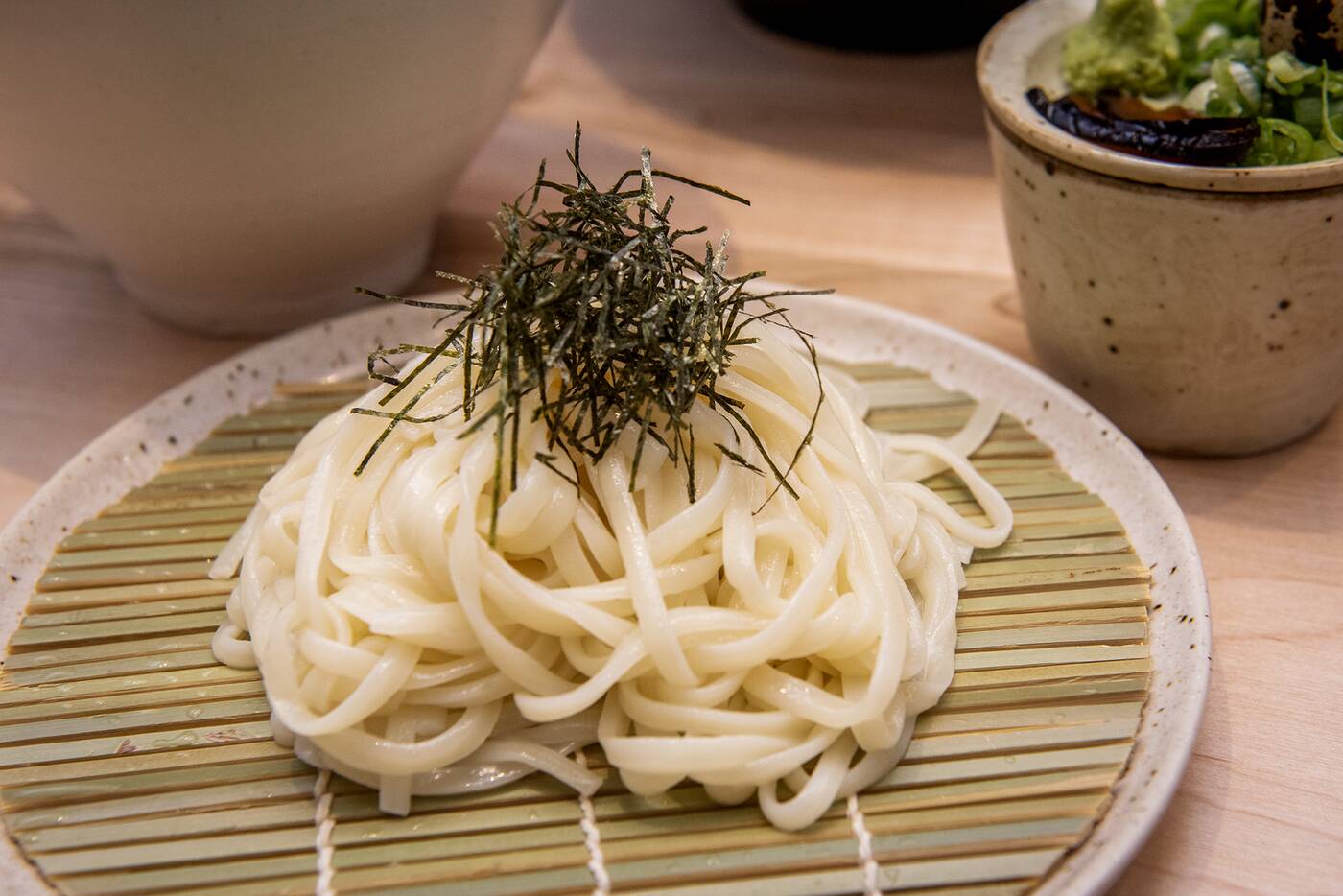 But one of my favourite options comes out of the cold udon menu: the zaru ($10), a super refreshing chilled noodle, served with a dipping sauce. 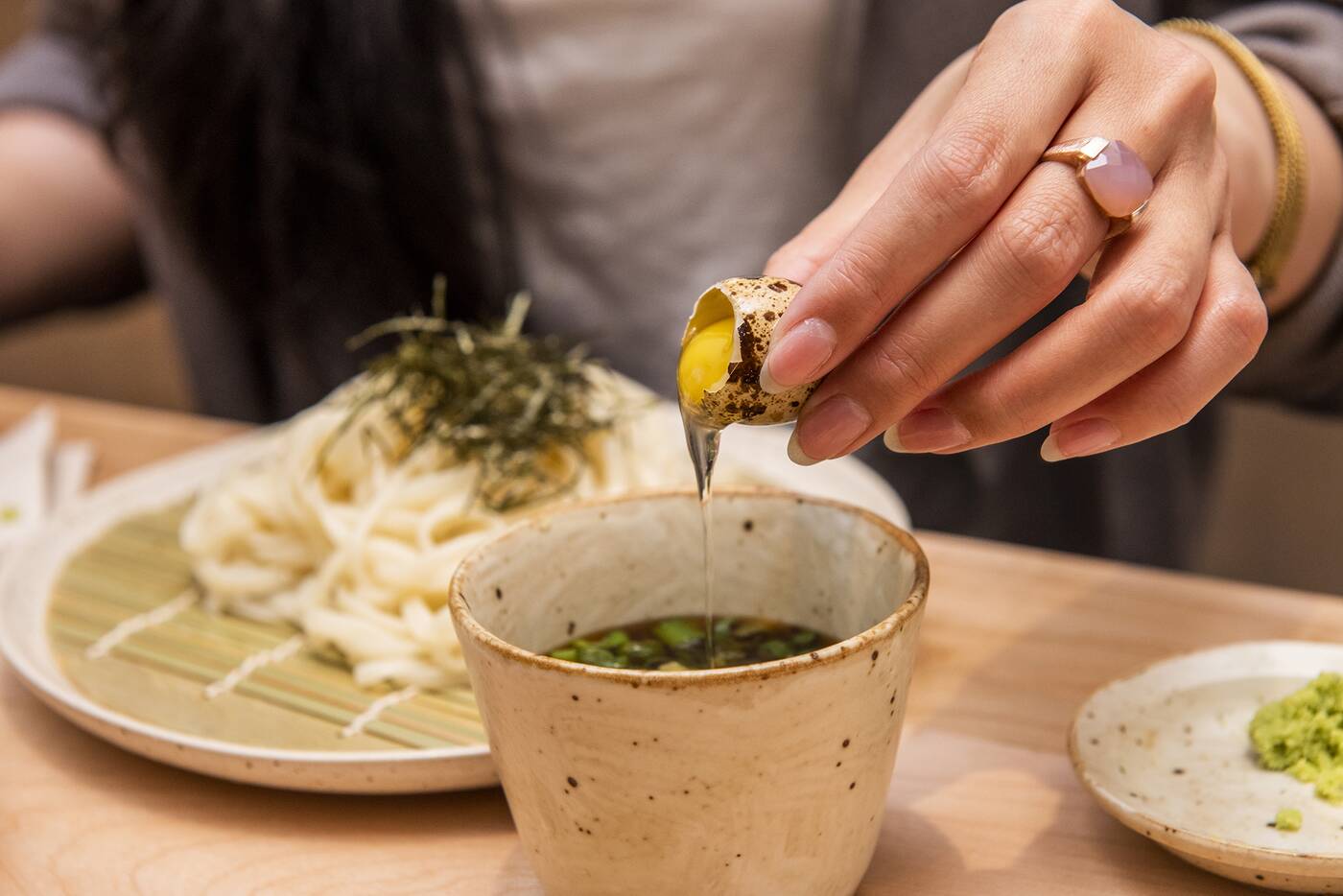 Throw toppings like green onion and a raw quail egg into the sauce before dragging your udon from bowl to mouth. 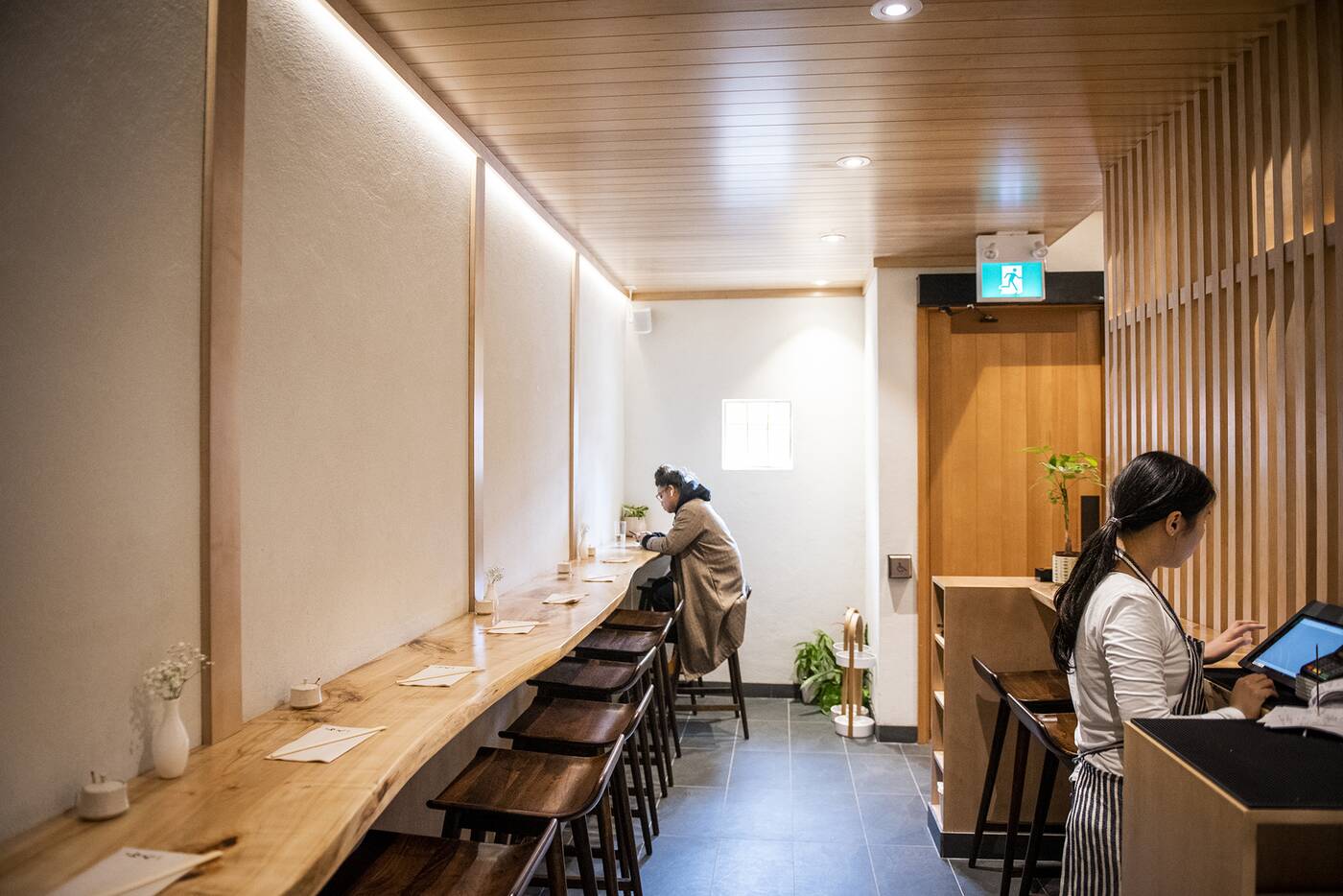 Definitely not something you'd expect by the bustling intersection of Queen and Spadina, Raku is a refreshingly secluded place to fill up on delicious udon noodles 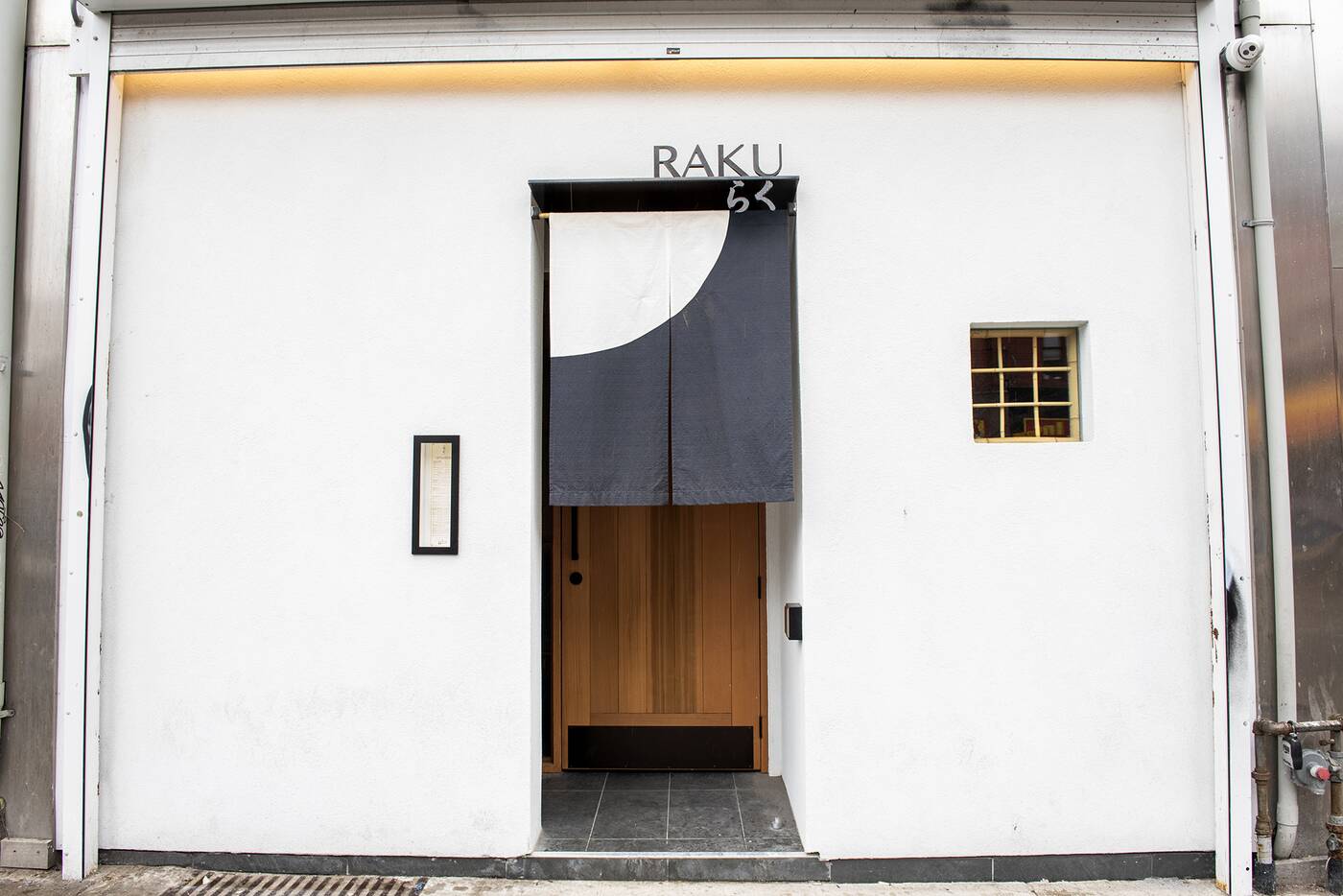