Rag Doll Eatery is a restaurant serving up satisfying plates of comfort food, and a lot of personality.

The vibe at this two-floored restaurant lands somewhere between an inclusive rock 'n' roll bar and where Sally from Nightmare Before Christmas might eat, if she liked booze and burgers.

Pandora Volkova and Tyler Ennis (not the one of TML fame)—an energetic pair—run Rag Doll's front of house, while the kitchen is headed by Chef Laura Gallivan, formerly of now-closed brunch mainstays like Yasi's Place and Lola's. 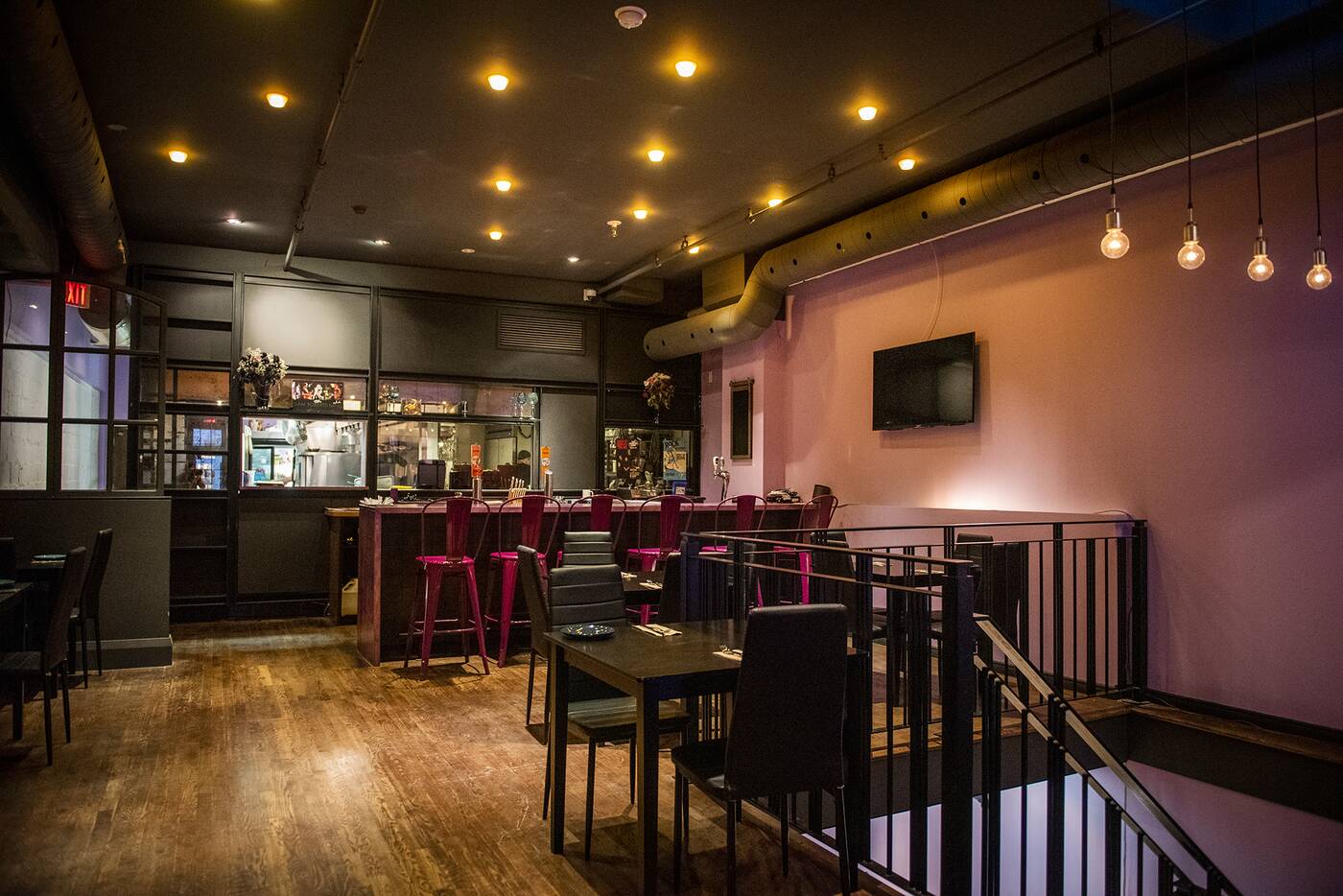 The regular brunch menu is full of hearty yet healthy dishes, and boasts numerous items made from scratch like sauces (they sell them by the bottle), desserts, and even bread.

Anyone from meat-eaters to vegetarians and vegans can find an excuse to come rock out to this playlist of 80s and 90s classic rock, plus there's gluten-free options too. 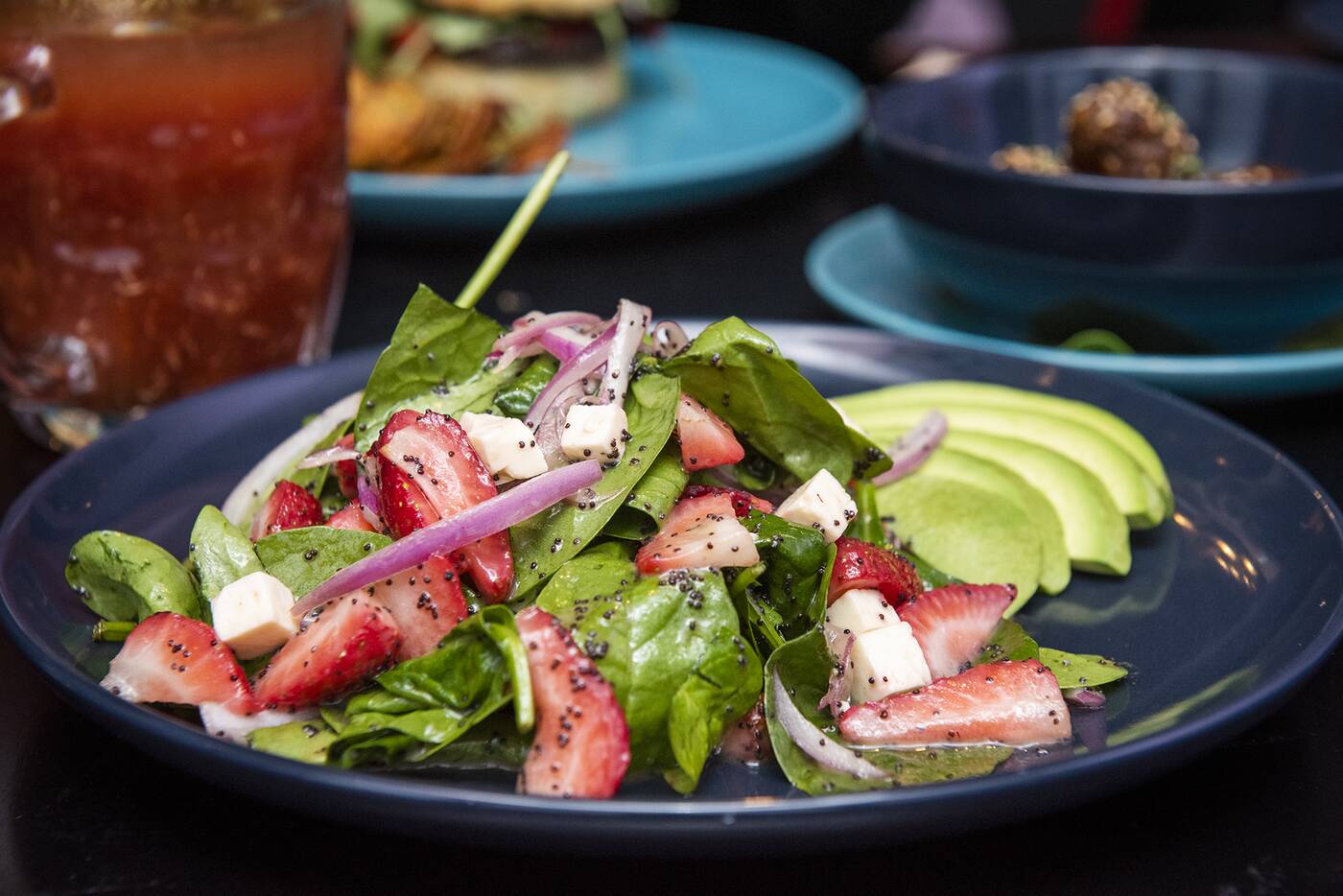 The Strawberry Fields ($15.50) is a sweet salad with avocado, spinach, and feta cheese, tossed with white balsamic poppy seed vinaigrette.

You can vegan-ize your meal by opting out of the feta and subbing for vegan cheese instead. 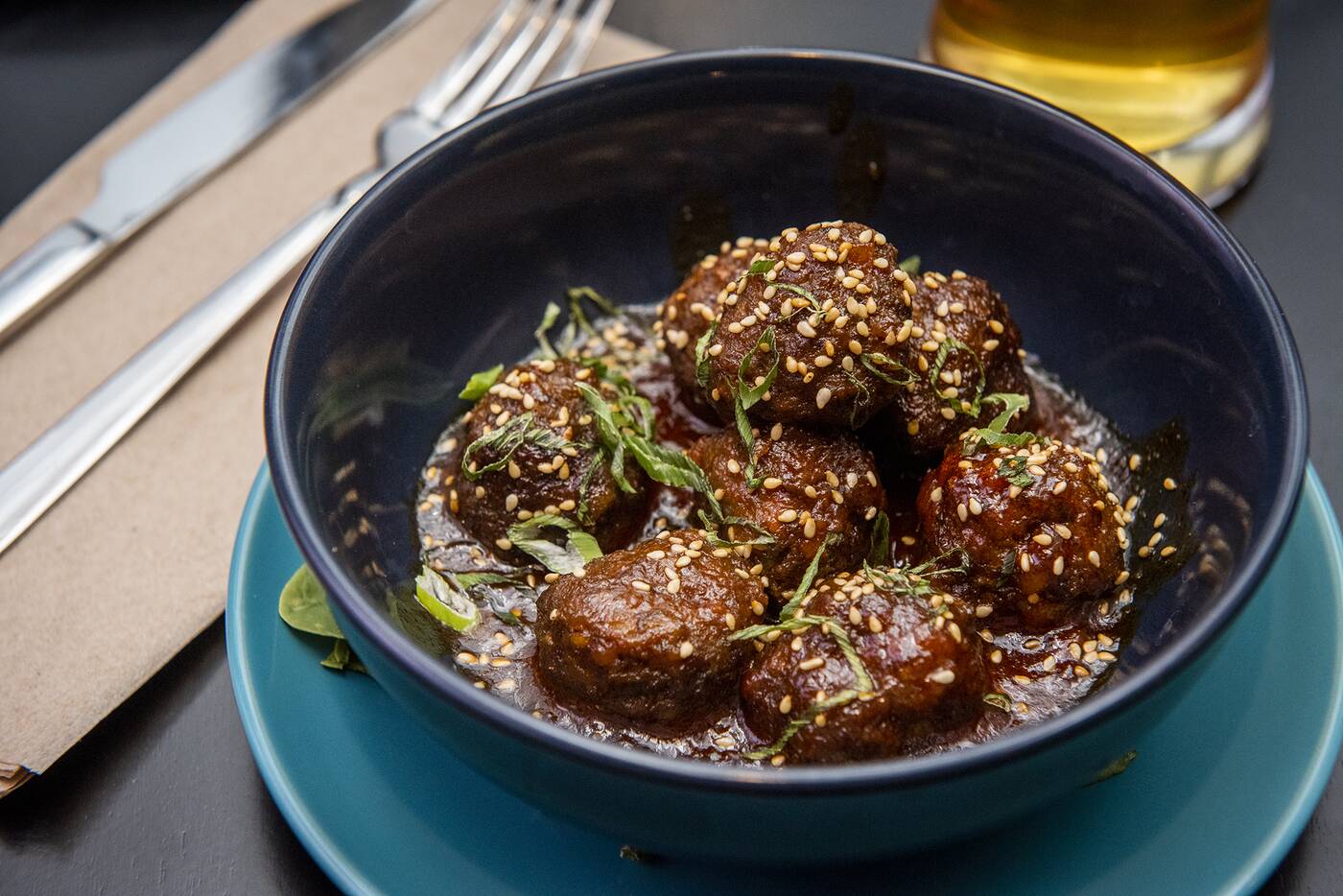 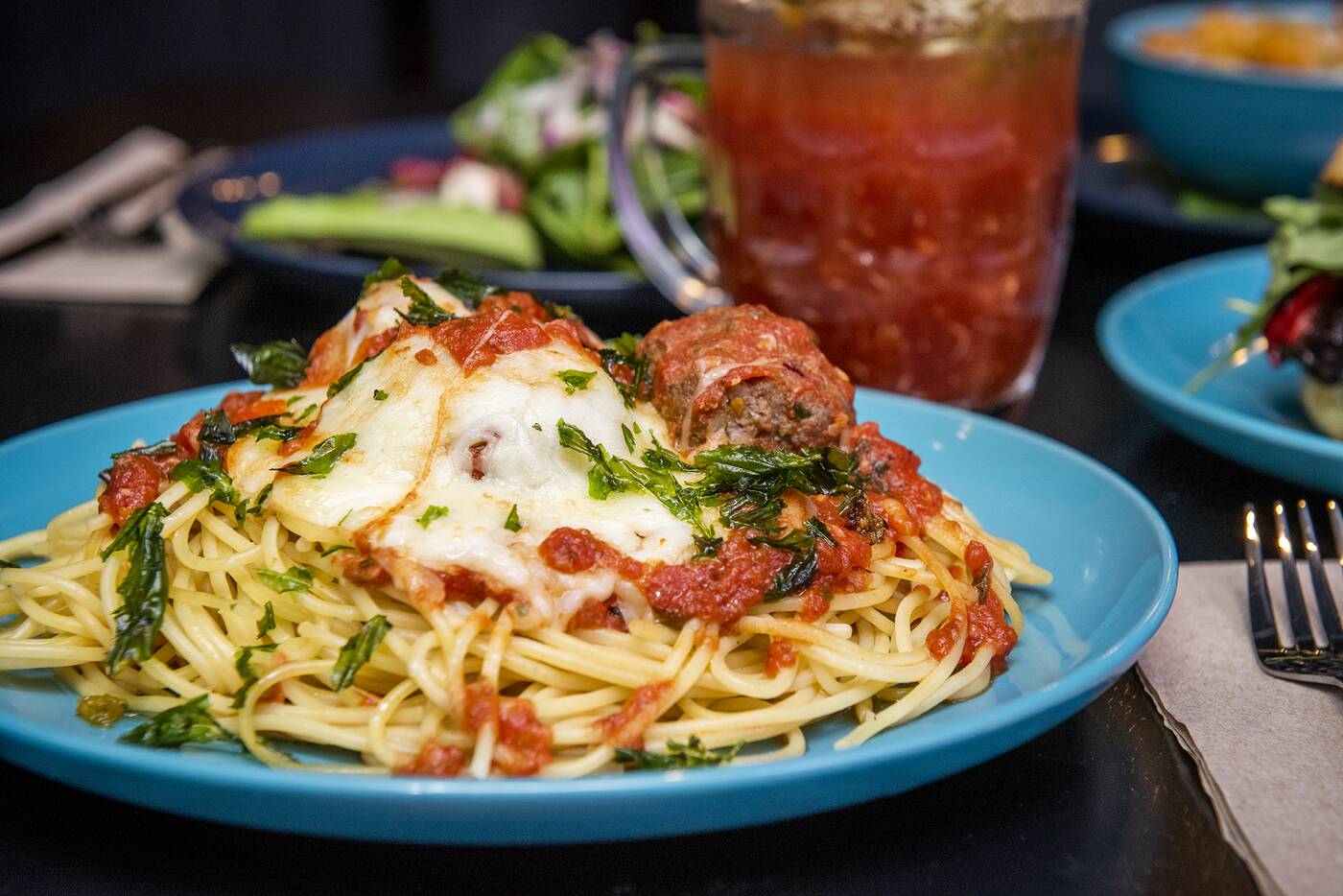 If you like your balls bigger, the Nirvana meatballs dish ($19.50) comes with three huge meatballs with spaghetti in a delicious marinara sauce. The dish is topped with an oozing pile of melted mozzarella and parmesan cheese. 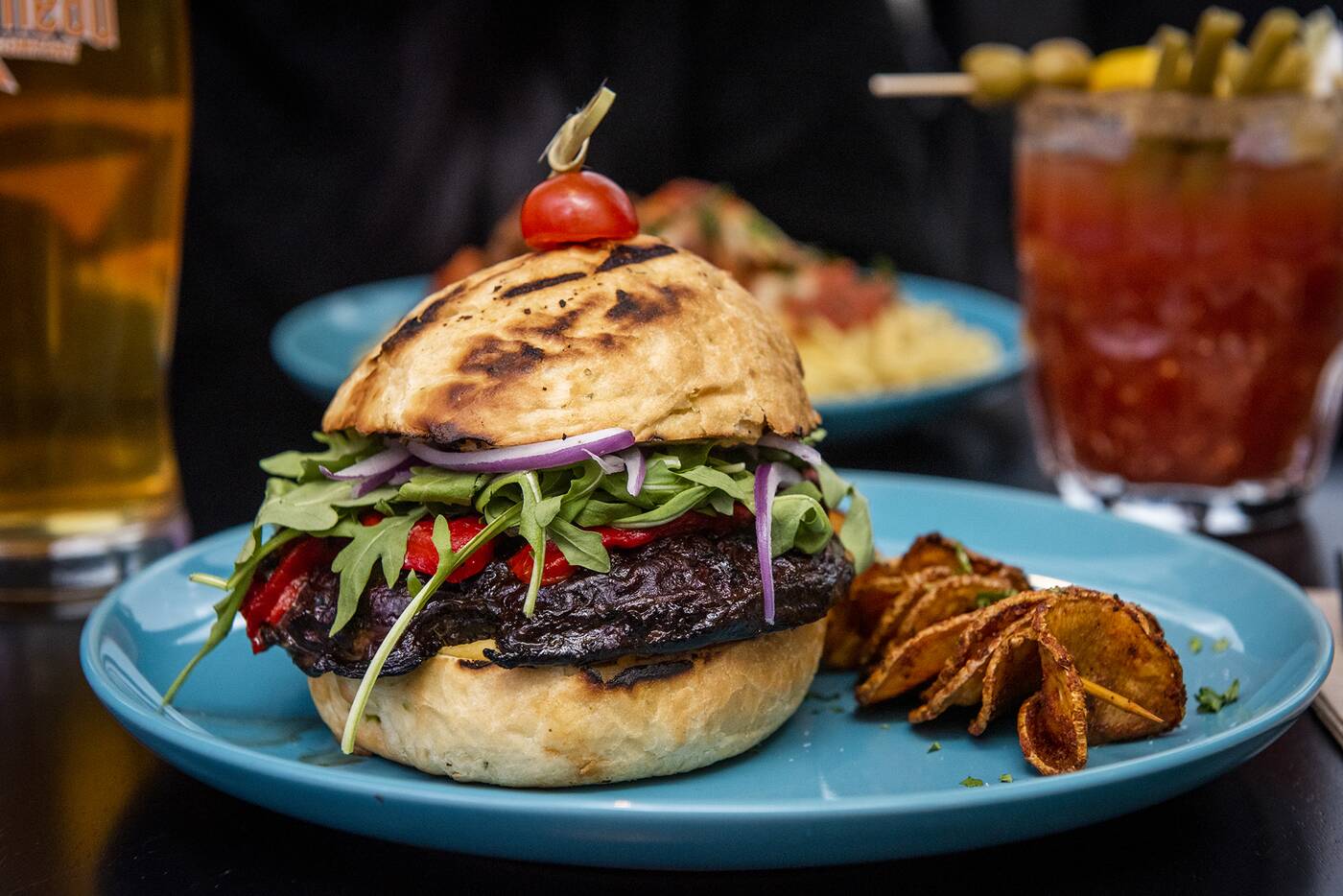 The portobello burger ($15.50) is a super homey handful of focaccia bun. The mushroom comes with house-made hummus, roasted red peppers and red onions.

It also comes with a side of skewered baked potato slices, and an option for vegan cheese, for extra. 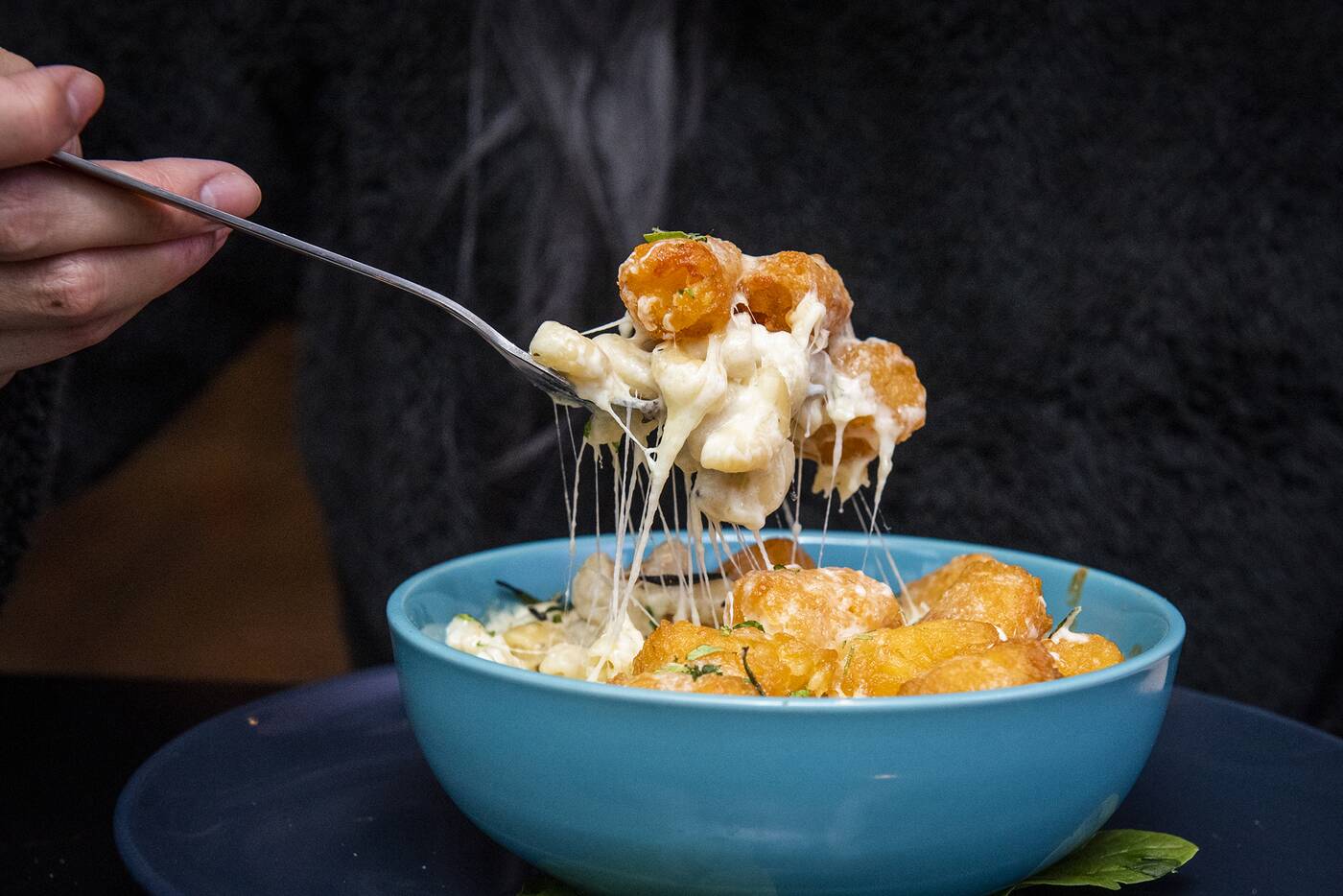 There's nothing more comforting than cheese, macaroni, and potatoes: the undeniable show-stopper of the entire meal is the delicious Fleetwood Mac 'N Cheese tater tots ($17).

This dish goes all out with three types of cheese with the mac, a layer of tater tots, and yet another layer of melted old cheddar on top that's so good it deserves an applause. 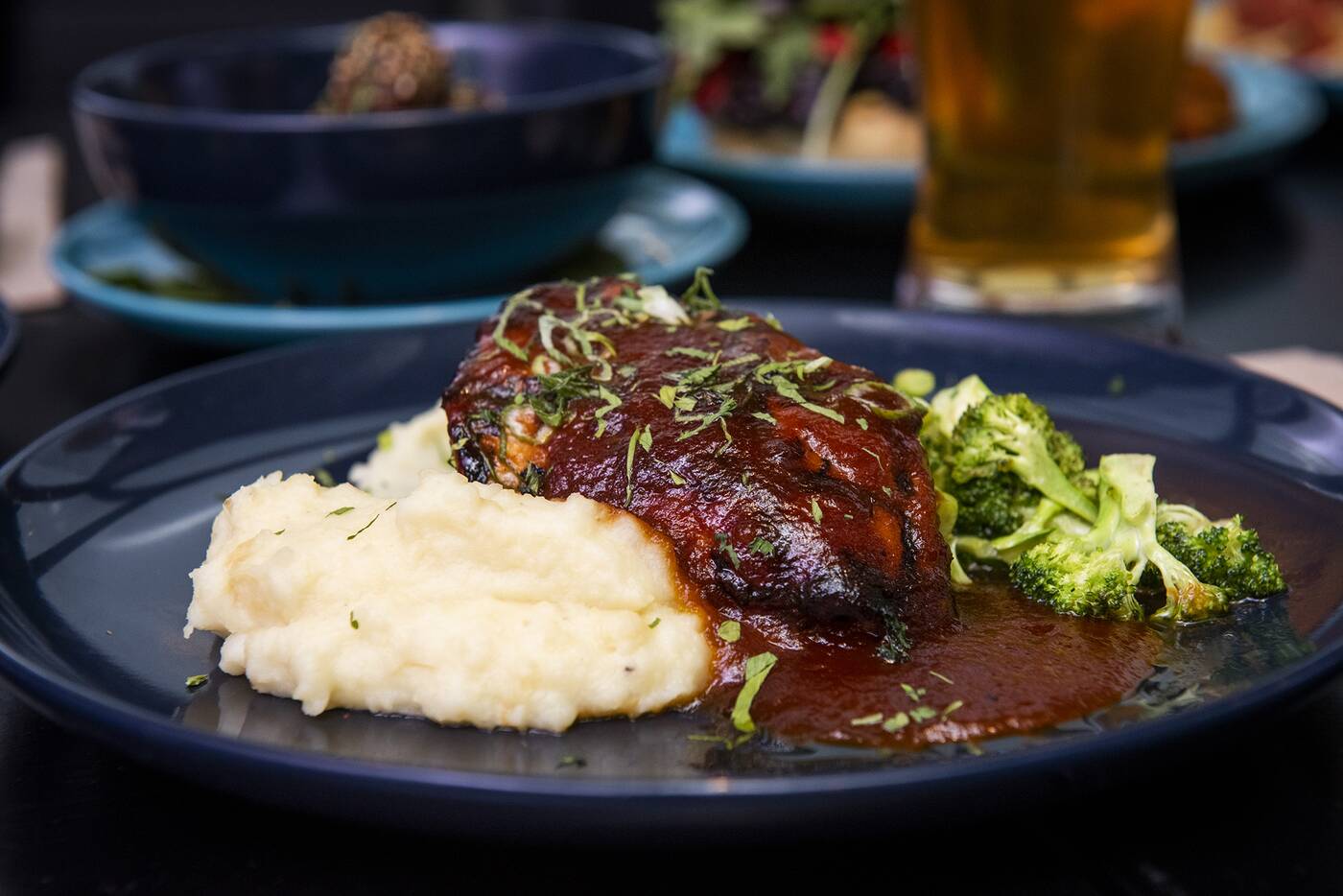 The Southern cross chicken ($20.50) is another hit. The locally-sourced chicken breast is marinaded in a sweet bourbon sauce for a standout flavour.

The breast is char-grilled and comes with mashed potatoes and veggies for an all-round solid meal. 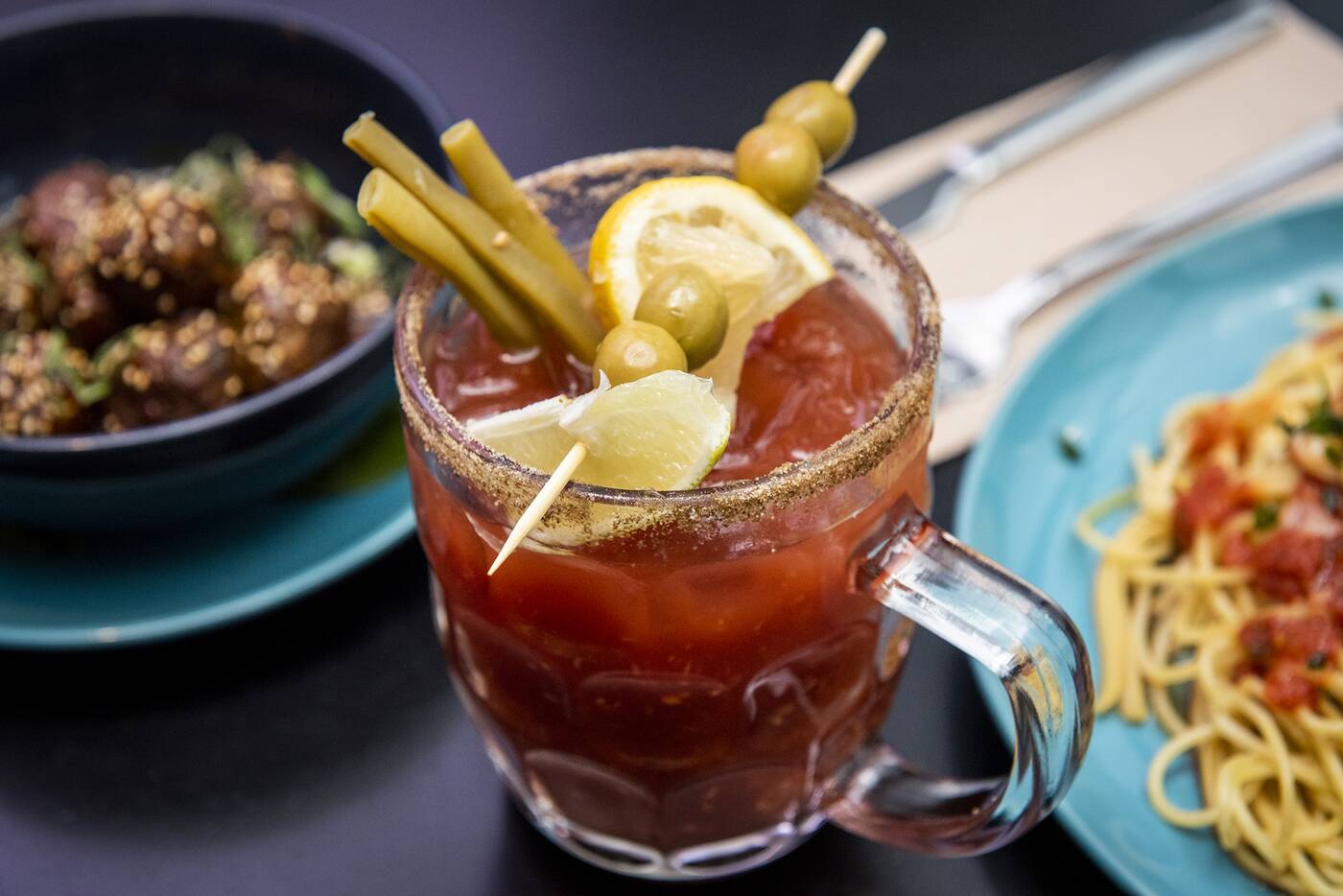 You can pair your meal with any number of drinks from the bar, including the salty, tangy Rag Doll Caesar ($10). 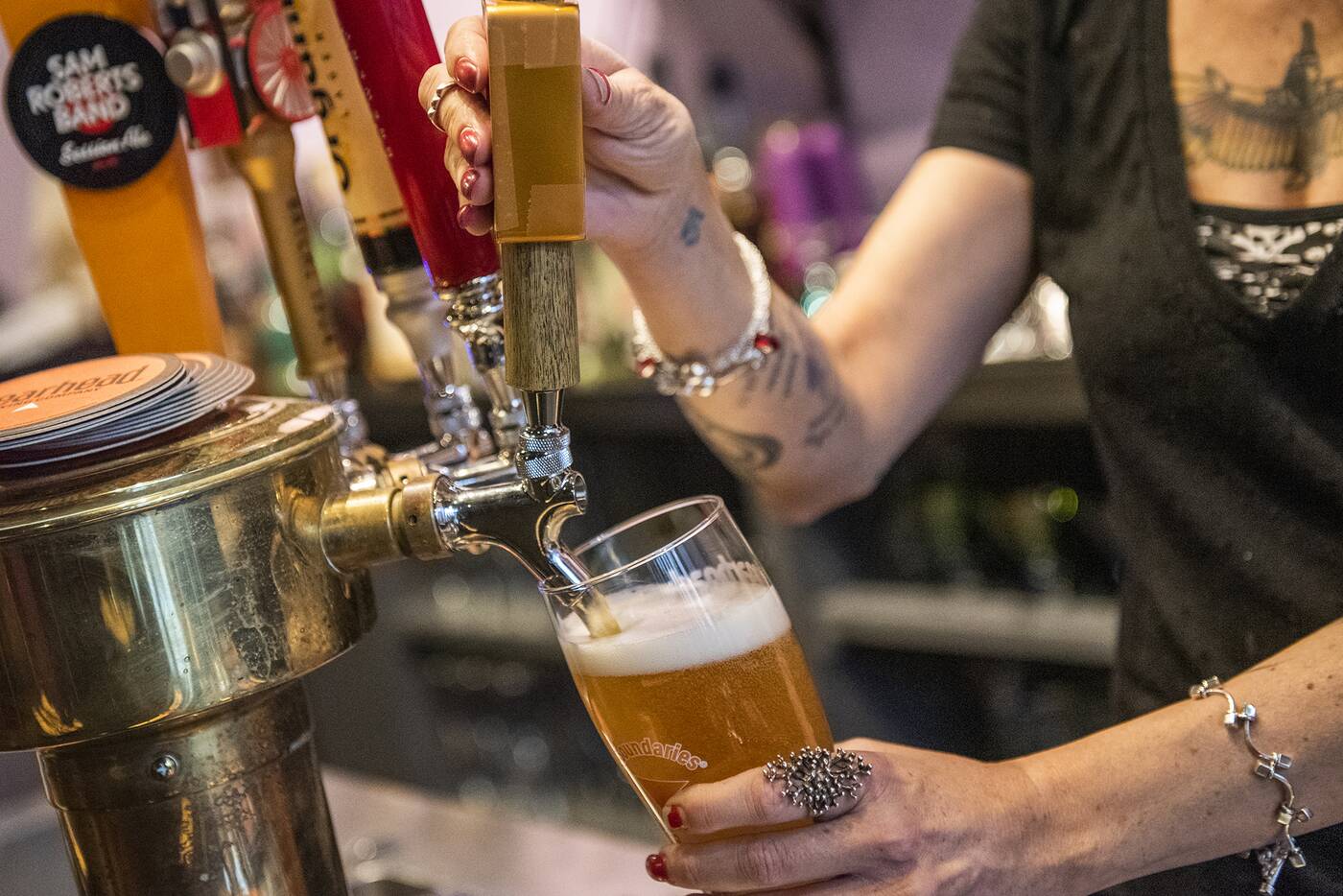 Or you can get a pint of their Rag Doll lager ($5.75), a light ale that's brewed courtesy of Spearhead. Fifty cents from every lager sold goes to the Parkinson's Foundation. 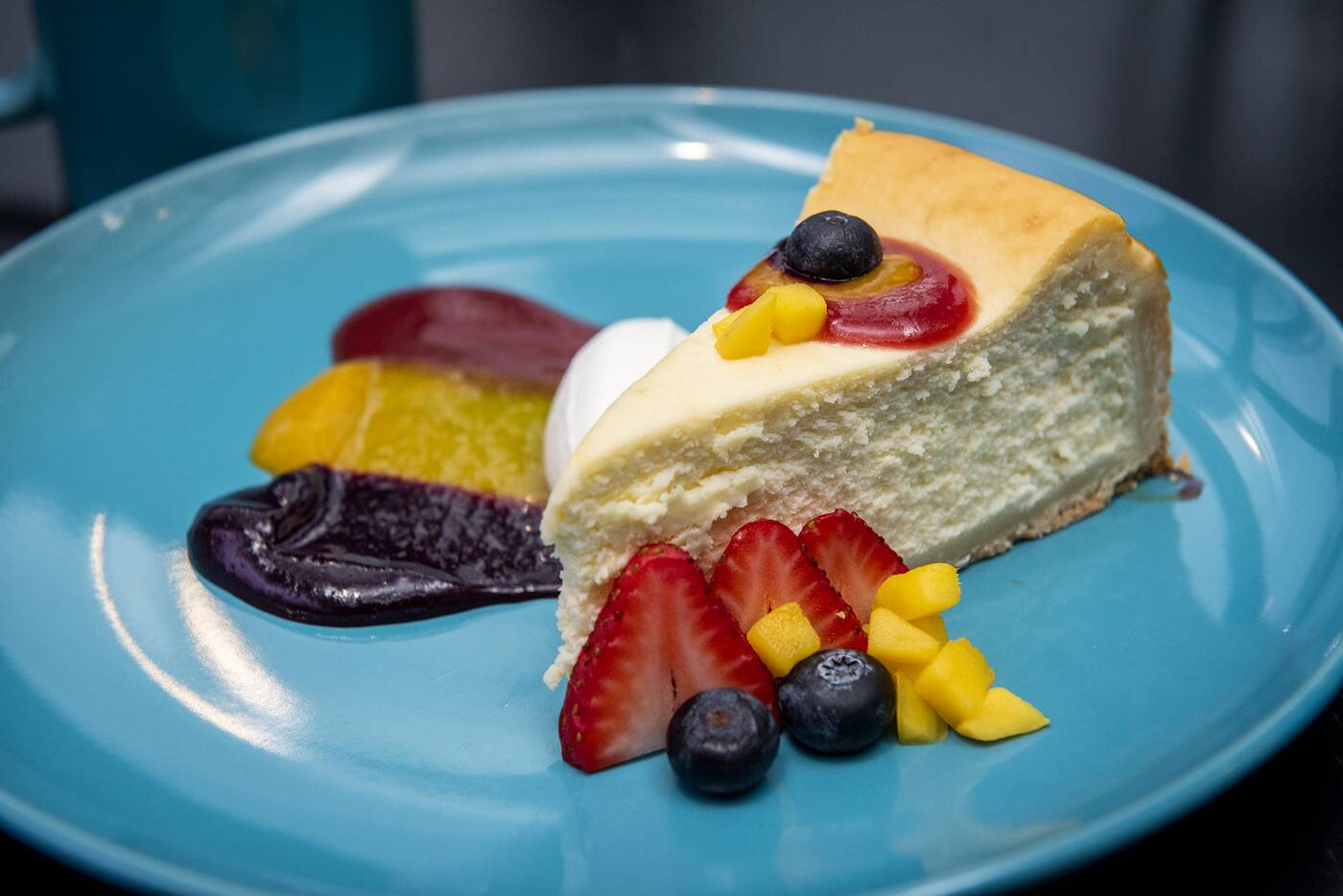 To wrap up the meal, there's a handful of desserts like a gluten-free homemade banana bread ($10) that plays off of Volkova's mom's recipe, and a New York cheese ($13).

They're still perfecting their own recipe, but this cheesecake is all the richness and creaminess you'd want. 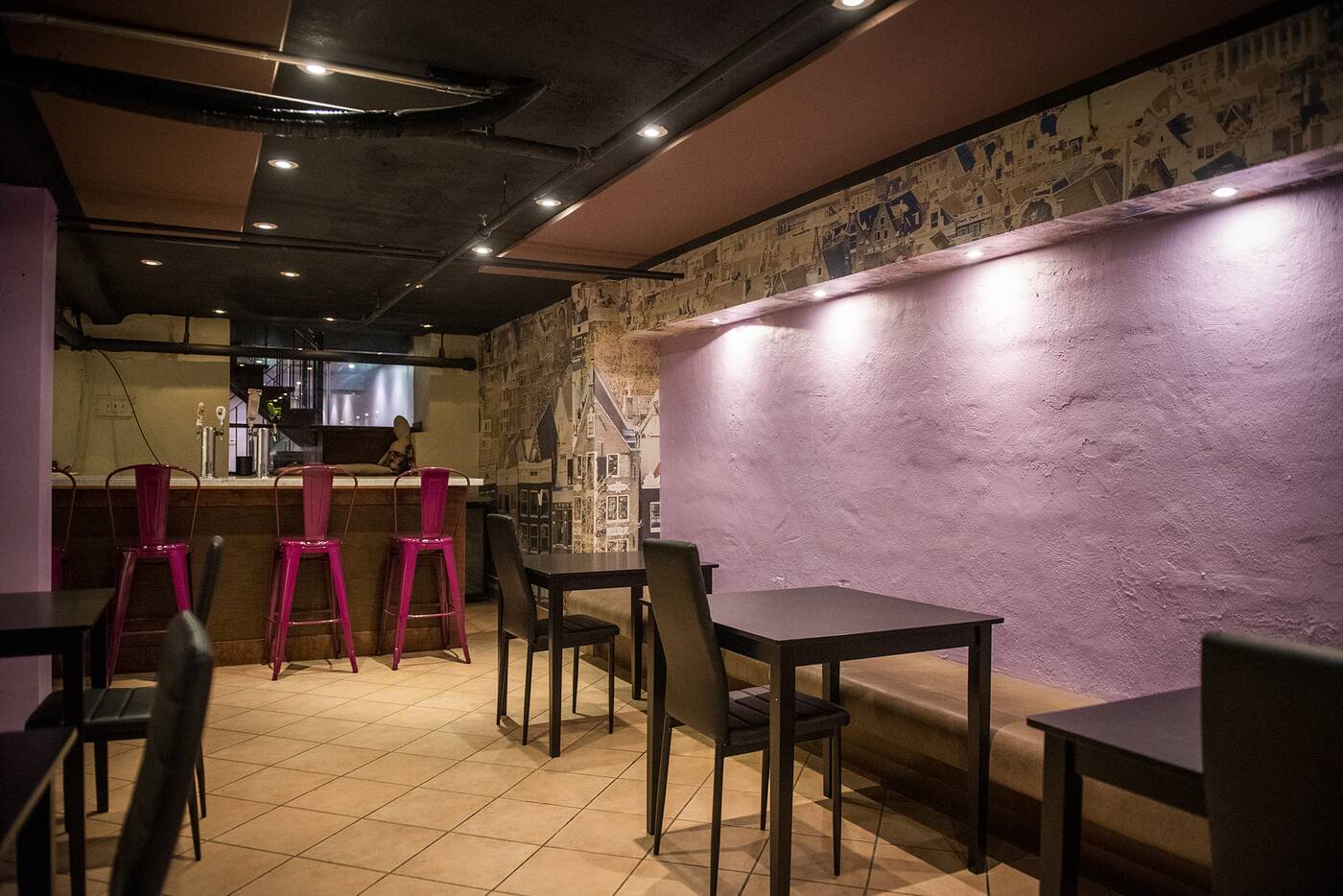 With a massive downstairs area for private functions (Volkova says charities can hold events there free of charge), Rag Doll is more than an eatery awash in purple. It serves good food, and its friendly vibe has potential to bring communities together, one rock song at a time. 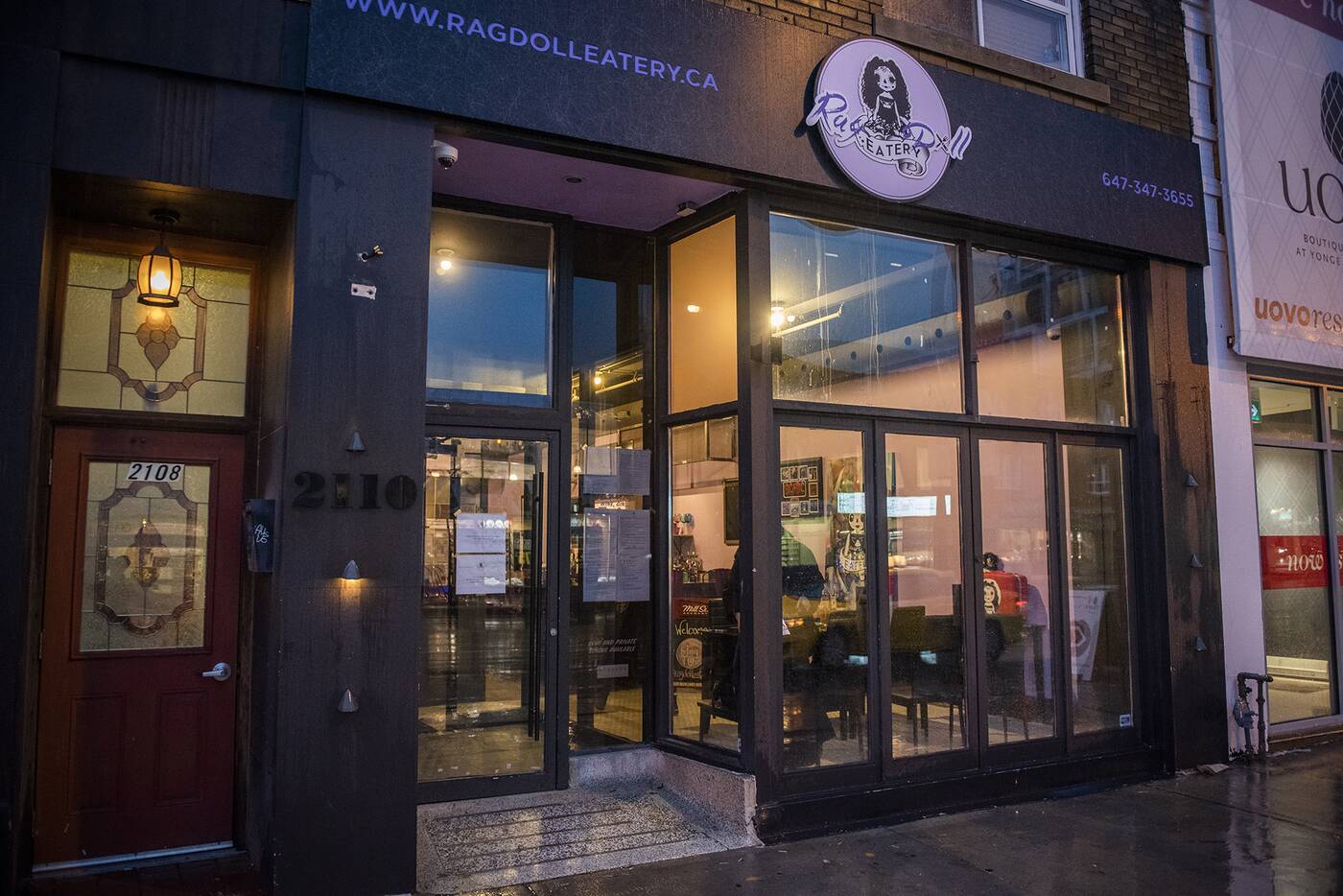