Prohibition may have had a controversial birth -- being the site of a feud between former partners Joey McGuirk and Michael Summerfield -- but aside from the signage outside, it'd be tough to find much evidence of these early hiccups.

Walking into the spacious pub, dimly lit by the green glow of its Grolsch signage around 6 p.m., I 'm struck by how rammed the place is with after-work imbibers and hungry plaid-clad hipsters. I'm told by our cheery waitress that it gets pretty busy on Thursdays, but always clears out around 10 p.m.

Whichever savvy restaurateur came up with the concept for daily specials deserves a medal. Did I necessarily feel like Prohibition's chalkboard-advertised "Mussels 2nite" special when I walked into the place?

Not so much. But I'm a sucker for featured or themed anything (at least when it comes to dining), so my companion and I decided to give them a go.

We settle into a high-top at the back of the restaurant, and after placing our requisite order of mussels (we go with the $13.95 Spaniard option, the promise of chorizo sausage being too enticing to turn down) get down to hacking our way through the rest of Prohibition's overwhelming menu.

The options are pure pub fare heaven, and everything sounds delicious. In the mood for fries? How about "hand-chipped russet Burbank spuds, twice cooked with sea salt" and your choice of either wasabi-mayo or a rather curiously named "garlic-goop shot"?

Mac n' cheese more your thing? They've got that too, amped up with gruyere, sharp cheddar, Roquefort, double smoked bacon, truffled cream, and a brioche/parmagiano reggiano crust. And the list goes on.

After much careful and agonizing deliberation, my dining companion opts for one of Prohibition's most popular items - the Buckingham Blanket ($12), while I opt for the Tri-Sliders ($14), the potent combination of a crab cake, a lamb burger, and a bison burger just being too enticing to turn a blind eye (and starving stomach) to.

We've ordered just in time, as our waitress quickly returns with a steaming plate of mussels (oh yeah, I'd already forgotten we'd ordered those).

The heaping plate of cockels is swimming in a tangy tomato bouillabaisse and served with a rather unremarkable loaf of French baguette, but is tasty nonetheless.

Alas, the chunks of gristly chorizo sausage are a disappointment and detract from the light, perfectly steamed mussels. 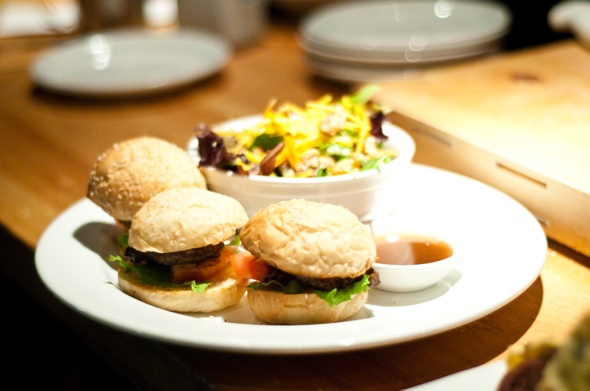 Having gotten our mussels fix, we turn our attention to our arriving mains. My fellow diner is smitten with his Buckingham Blanket, which consists of beef and caramelized onions wrapped in a sort of weird Yorkshire pudding/crepe hybrid, which is served with a tasty, horseradish flavoured au jus option.

It's an interesting approach to the classic British pot roast but I can't help but note how much it looks like a poor man's Sunday dinner on the run, the kind of bastardized wrap option you would likely find in the 7-11 sandwich fridge.

Protesting too much, he lets me try and bite, and I have to concede it's a pretty solid reinterpretation. Besides, I have bigger problems happening at my place setting.

Much like cupcakes and, well, miniature versions of anything, sliders have quickly become the pint-sized dynamos of the culinary scene. It seems like everyone is throwing them on their menu these days, and Prohibition is no exception.

Here, the results of caving to this trend are heartbreaking. The crab cake is a pitiful, ossified version of its glorious former self, while the lamb and bison options are both so dry and under-seasoned that I have difficulty even distinguishing between the two.

All three are sandwiched between generic, store-bought sesame buns, and if it weren't for the lively side salad of tossed greens, roasted beets, and candied walnuts, the entire dish would be a disaster. 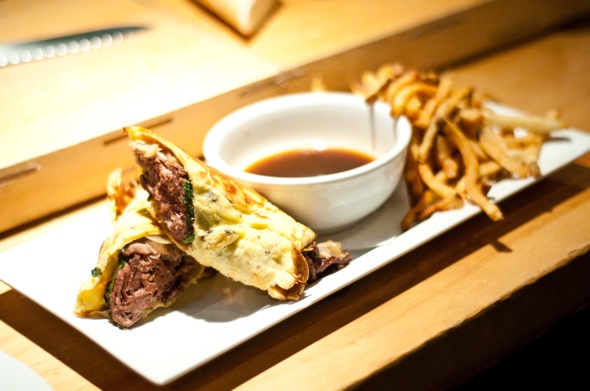 Coming into Prohibition, I was optimistic. And I still want to be. The upbeat, new wave soundtrack, relaxed atmosphere, and reasonably priced selection of great beers (Sapporo and Erdinger on tap!) hold a great deal of promise for this Riverside resident.

And, to be fair, I should add that the aged white cheddar grilled cheese on sourdough ($5) ordered by nearby diners nice enough to offer us a bite (who does that!?) was everything you wish your attempts at making grilled cheese after a night of too many vodka sodas could be - crunchy, flavourful, greasy, but miraculously light at the same time.

Yet upon leaving Prohibition, I'm again reminded of the advice against creating large menus dispensed to restaurateurs-in-peril on the Food Network's Restaurant Makeover - often you end up sacrificing quality for quantity.