Pie Squared is a brand-new eatery built around a simple equation: Take U.K.-style meat pies, add some clever new flavours, square off the edges for portability (and maximum flavour penetration), and wrap the whole thing up in a cute, science-themed package. The new spot, hidden in a row of stores at Bloor and Sherbourne, carries the theme all the way through to the symbols, reminiscent of the periodic table, piped on the top of each square pie.

Fittingly, owner Gino Amodio says the team took an analytical approach to figuring out the meat pie, already a rising trend in the city thanks to spots like Kanga and Wiseys . The team behind Pie Squared worked with food and taste scientists to refine the concept and develop their recipes. 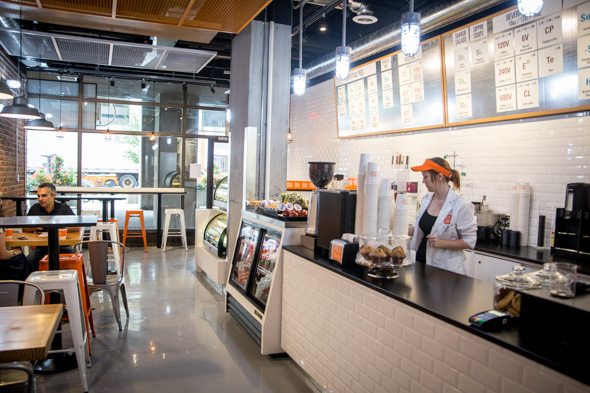 Among the findings: Psychologically, eating a pie is all about anticipation. "You take your first bite - it's not really that great, cause it's all crust. Then you get into the middle and it's pure heaven. Then you finish off on another low note, cause it's all crust again. So we tried to blend it out, where you have a lot more filling-to-pastry ratio." 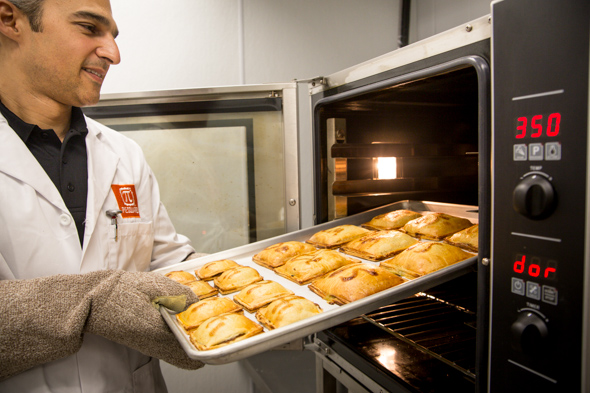 Even more engineering was needed to convert English recipes to Canadian ingredients - you need just the right proteins in flour to be able to create a crust that holds up to handheld eating - and to create the square box that cradles your pie during on-the-go eating. (They even made one with two separate sleeves to hold double servings.) 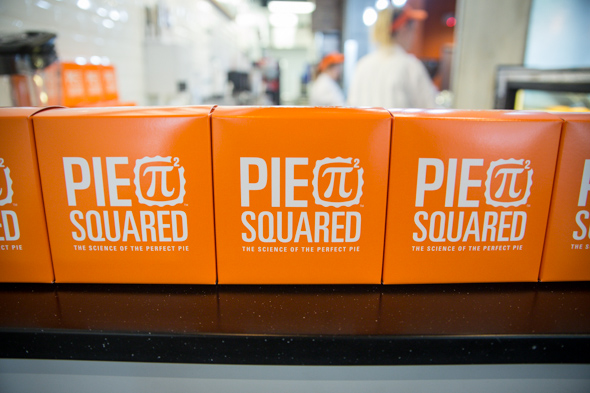 Lest you think the scientific method extends to 20-letter chemicals on the ingredients list, though, Amodio is quick to point out that everything is baked from scratch in the back of the shop daily, with basic ingredients like butter and eggs. ("I don't want you to think we've got robots back there making pies," he jokes - though they did briefly flirt with the idea of rigging a 3D printer to pipe those symbols onto the tops of their pies.) 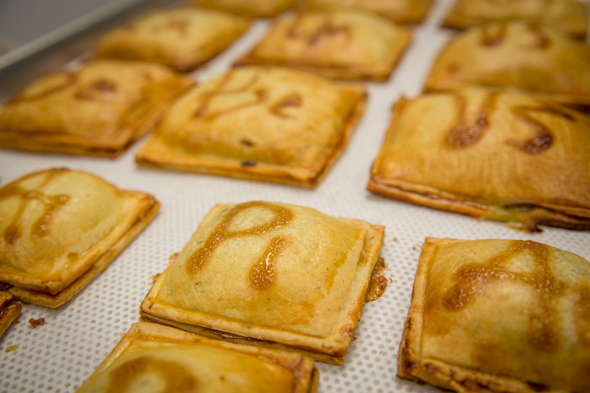 The available pie flavours, too, stick to the tried-and-true, featuring old favourites like chicken and mushroom or steak and Guinness, slightly more adventurous twists like pulled pork or Montreal smoked meat, as well as some vegetarian and egg-stuffed breakfast options. (Vegans, take note: The crusts contain butter and eggs.) They're planning to swap a few flavours in and out - future plans include a turkey and mash Thanksgiving pie and a bacon-chorizo version. 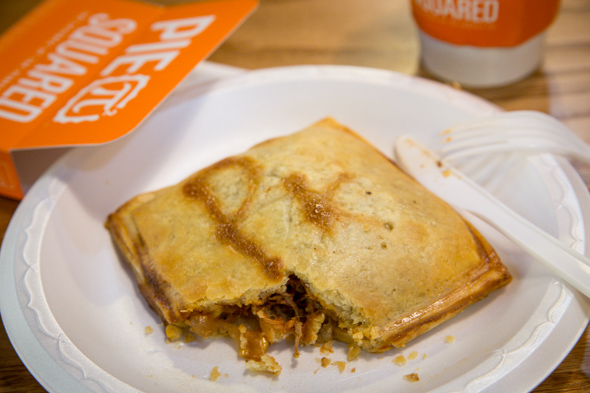 The steak and Guinness pie, a sizeable serving for $4.43, comes stuffed with tender beef and potatoes surrounded by a mild Guinness-infused gravy and swathed in a buttery, chewy, incredibly-dense crust; undeniably comforting, if a little on the bland side. If you're craving something more lively, their pulled pork pie (also $4.43) will do the job - it's sweet and saucy, studded with pieces of corn. 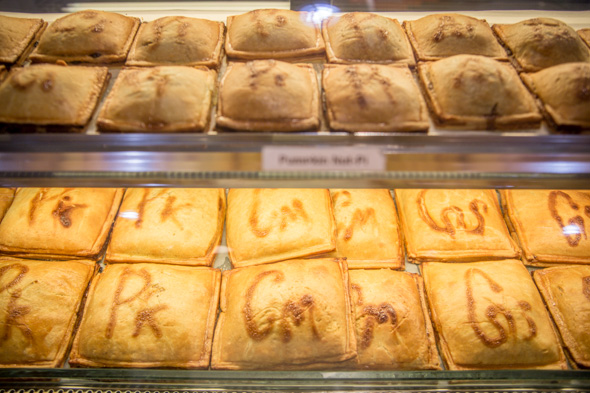 Sweet pies are also available in slightly smaller iterations, about half the size of the savoury options, so you can (ideally) find room in your stomach for lunch and dessert. On my visit, the sweet options included pumpkin, apple crisp, and chocolate banana ($2.21); the latter is a melty concoction of Nutella, bananas, and half-melted mini chocolate chips that just begs for a glass of milk to wash it all down. Or a coffee - they offer their brew in 120V (mild), 240V (bold), or 600V (espresso-fortified) versions. 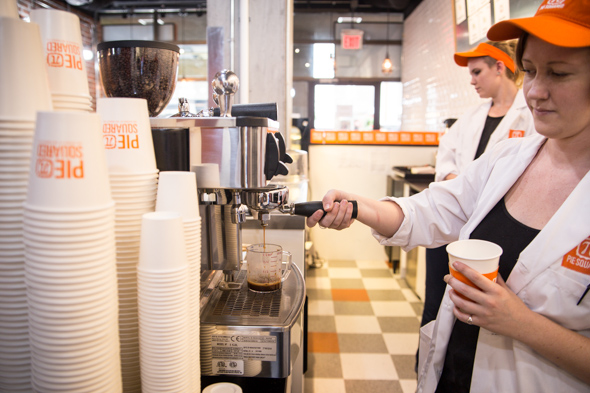 If you're looking for a lighter, non-pastry-encrusted option, they've got you covered there, too - salads in shakeable containers for mixing are available, as well as soups. Amodio says as they progress into winter, they'll be offering chicken-based and veggie soup options, as well as chili. There's also their tart-like "pie squares", as well as cookies and muffins, all baked in-house. 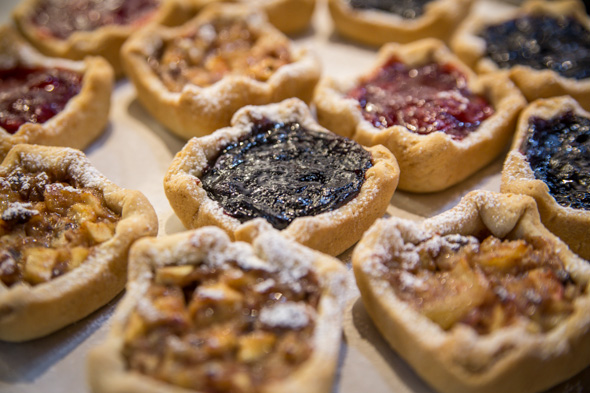 The restaurant launched in mid-August, and though heavy, saucy personal pies might not react well with summer's heat, the impending onset of cooler temperatures might just mean optimal conditions for Pie Squared. 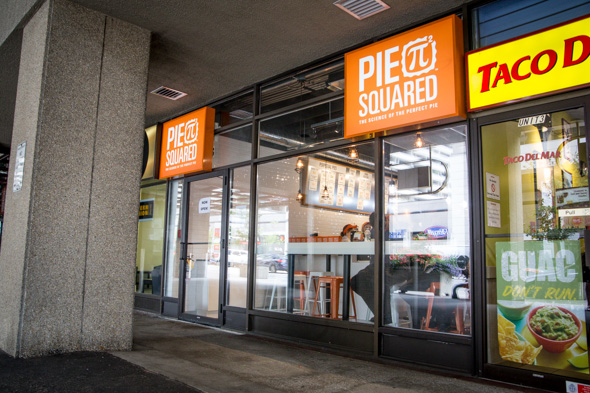