Picnic isn't all parkside blue skies, lush grass, and catching a tan sunny-side up on checkered blanket. So don't expect the customary baguette, processed cheese and cold cuts, ziplocked veggie sticks, or no-name soda pop piled into wicker basket. Heck, it even forgoes the wicker basket. Yet regulars of the dated doldrums of the Holt's concourse at Bay and Bloor may beeline for this new prized sunspot. 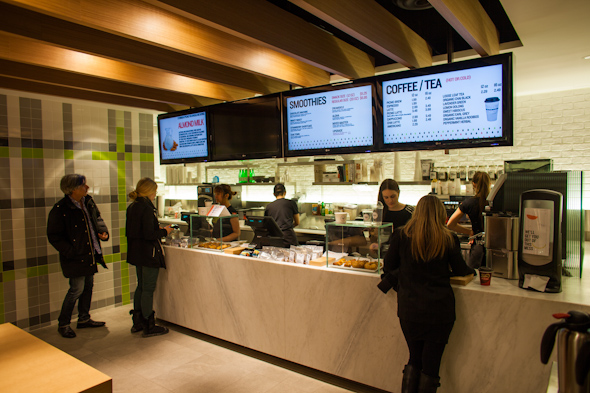 Across from the pasty-whey drab of Druxy's , a skip away from the pricier Holt's CafĂŠ, Picnic boasts shiny happy gloss to match its clientele. One big smile, their kawaii watermelon logo ushers you into a clean and bright space of crispy minimalist whites, silvers, and CB2 pastels. Abuzz, the staff here is alert, attentive and the friendliness doesn't seem forced. Picnic has obviously nitpicked over every last detail in building its brand - don't be surprised if this is the first seed of many in the GTA. 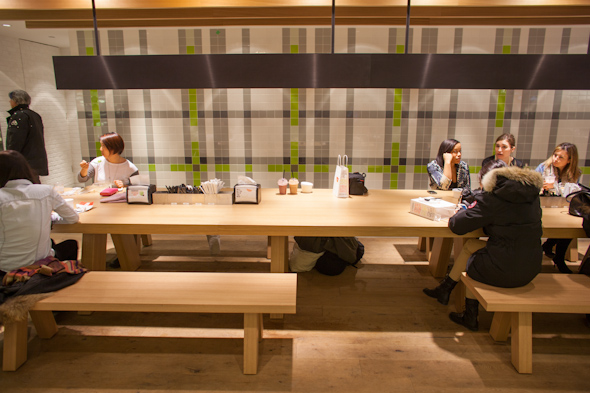 The lone token picnic item is also its centrepiece: a long, bright, and glossy wooden table, running across the room's width. While the tumblr of busybodies tend to breeze gaily in and out, the communal experiment actually seems to work, the picnic deities of yonder thinking, why not? I went in expecting it to backfire given Yorkville's (generally unfair) frigid, self-absorbed reputation. Instead, I got caught up in a few friendly chats during my short stint. That's certainly a rarity at, oh, say, Salad King , Momofuku , or even most izakayas in town. 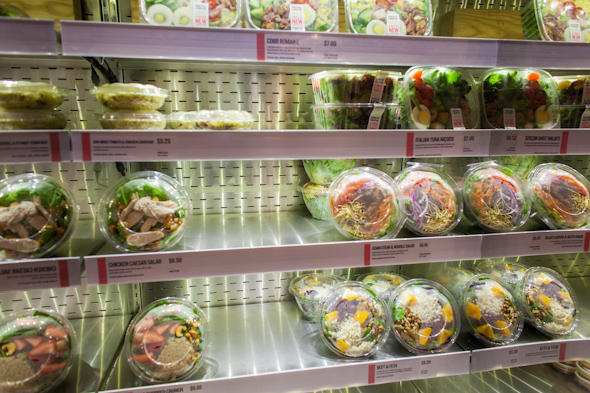 Menu-wise, raving-at-the-mouth I was not, but what I did try they did well enough that it's an easy sell if I'm nearby. The prices are quite competitive and they walk the line well between health-conscious and guilty pleasure. Beyond the nuts and bolts of bulk snacks and an assortment of fruit cups you'll find Picnic's fridge stocked with salads galore ($5-$8). 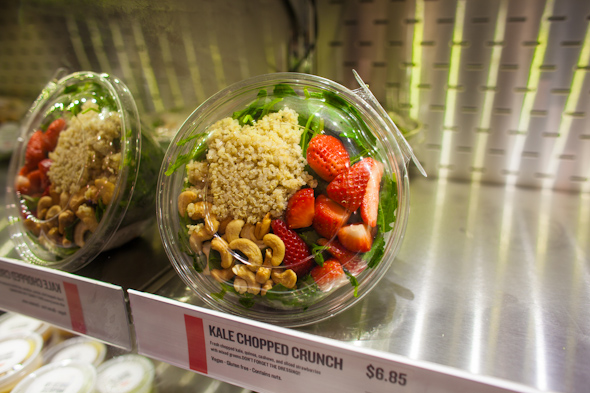 They range from a Cobb Romaine ($7), Beet and Feta ($6.20), to a Chicken Caesar salad ($6.50) or their Kale Chopped Crunch ($6.85), which tops the signature foliage with a lovely twirl of cashew, strawberry, and lemon-scented quinoa. 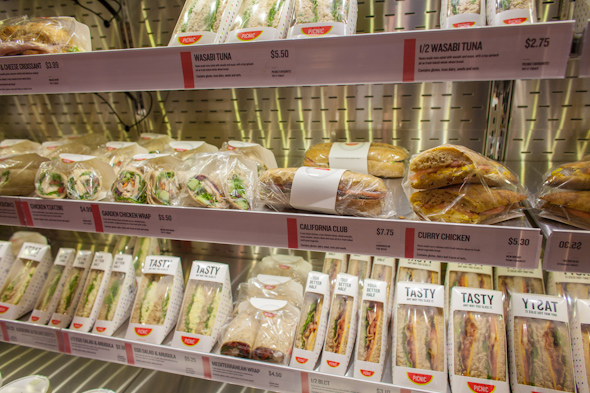 For brown bagging, their sandwiches ($5-$8) seem on the up-and-up. Egg salad and arugula, wasabi tuna, a brie and apple baguette with fig-balsamic spread, as well as a gluten-free "Thanksgiving dinner" number with sage crusted turkey, heirloom tomatoes, mashed sweet potatoes and cranberry mayo. Plus, cheap sandwich halves for when a salad bowl just isn't enough. Bonus karma. Whether it's sandwich, salad, or wrap, they're all premade - great for take-out dashers. If freshness is really an imperative, though, one wonders, why no made to order option? I'm in no rush, what if I want to picnic? 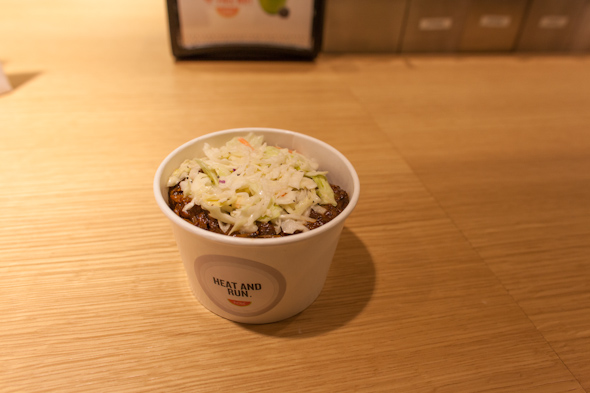 I kept it simple and went for their BBQ pulled pork on quinoa topped with slaw ($5.85). Packed in a small container, it hit the spot, and since I came during the lunch rush I was lucky to nab one of the last helpings (it usually sells out). The quinoa could have stood to be a grade more al dente, especially doused as it was in a heaping saucy pour-over of house-pulled tender pork. If I needed more crunch though, the shredded cabbage did the trick. Other days they do pulled turkey. I look forward to a rotation of mac & cheese, chicken pot pie, and Mexican hot pot with spiced chicky, tomatoes, cilantro and black beans, slaw - all at the same price point. 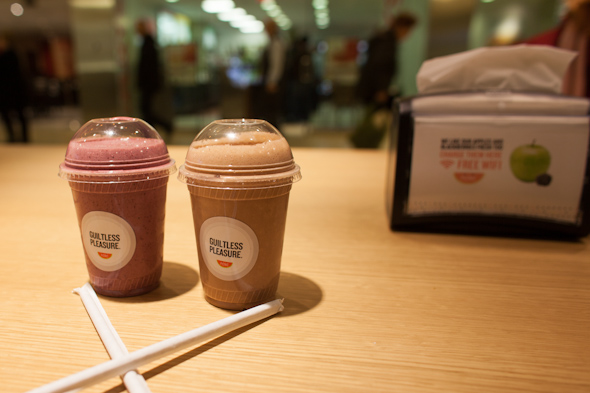 Their smoothie list does not falter - one of the main reasons I'll be back sooner than not. Their snack size (12 oz - $5.25) will satisfy most, and their regular size (20 oz - $6.95) can swap as a meal unto itself or a post-workout reboot. The Chocolate Machine was an easy first choice, blending choco almond milk, banana, almond butter, protein powder and coconut oil. 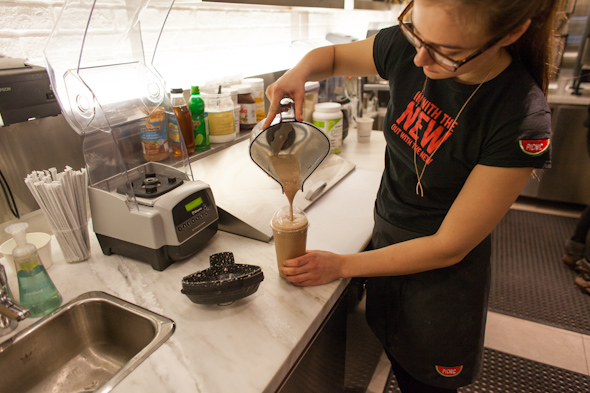 The Mix Master, one of their most popular, also ended up being my favourite: almond milk and butter, banana, mixed berries, kale and vanilla whey. Not too thick or thin, its bubbly froth burst with pleasing almond joy goodness. I'd also get the Wakey Wakey again - basically the Choco Machine with a shot of espresso.

Overall, I suppose generic vanilla whey powder works fine, but if I came in regularly I'd gladly pay for a sunwarrior or vega upgrade. At least the quinoa or coconut milk substitutes ($1 extra) shake things up a bit. For variety, they'll also be having special monthly smoothie recipes and if you want fresh juices instead of smoothies, they have a line of their own which they bottle daily. The healthiest of the bunch, the Green Infusion, has spinach, kale, romaine, cucumber, parsley, apple and lemon. 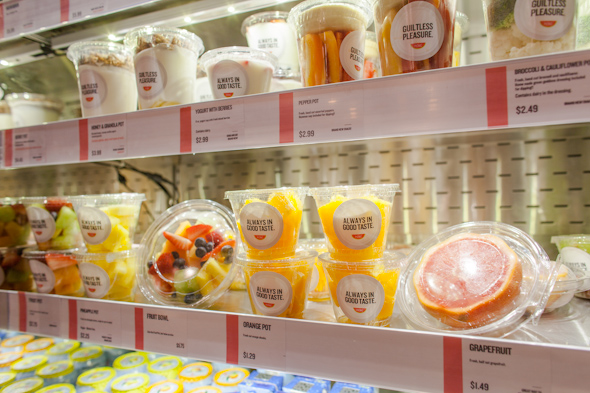 One final question: where are the watermelon slices? Given that Picnic is all over their social media , they're missing out on a good promo! 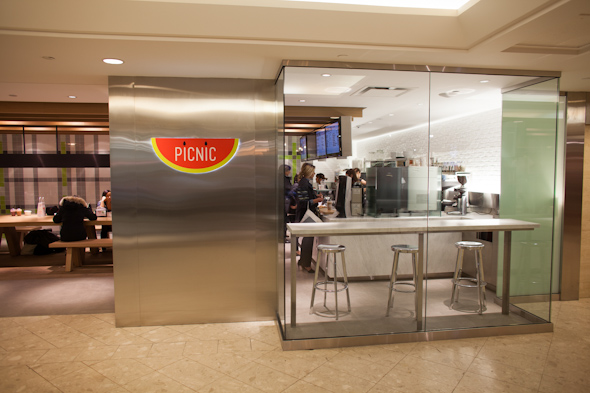