Picea 997 has been a long time coming — and residents of what's sometimes referred to as Dovercourt Village couldn't be happier to have a little bit of new life in their neighbourhood. Originally set to be called Ivy's, the restaurant occupies an old bank at the corner of Dupont and Dovercourt, a corner that surely was in need of a little bit of activity.

Signage promising authentic Neapolitan Pizza popped up in the spring, and the restaurant finally opened in early summer. Does Toronto really need another pizza joint like this? Perhaps not so much, but as someone who lives in the neighbourhood, I can tell you that Dovercourt Village couldn't be happier. While the food has shown inconsistencies over the five or so times I've eaten it (dine in and take-out), on the whole, it's well-prepared and reasonably priced. And, yes, the pizza is very good. 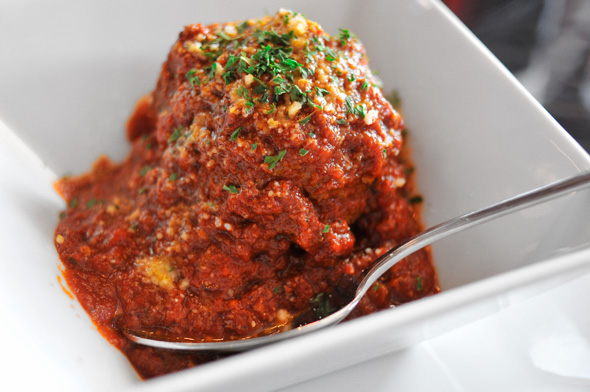 Although the sauce that accompanies Emily Maggio's meatball ($8) has changed more than once since I started ordering it — ranging from a brighter red and less stewed liquid to something darker and chunkier — each iteration has revealed a garlicky and tender meatball that serves as a perfect warm up for the pizza to come. It's rather comforting dish (and is quite filling) despite the small bowl in which it's served. 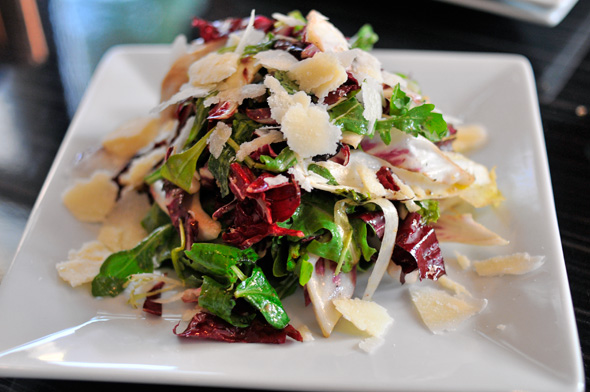 Salads have been hit and miss for me here. On multiple occasions the Baby Arugla offering ($8) has been just far too acidic, the peppery characteristics of the arugula drowned in an overpowering lemon dressing that could use more olive oil to tone it down. That's a bit of a shame given how lovely the Parmigiano-Reggiano is. 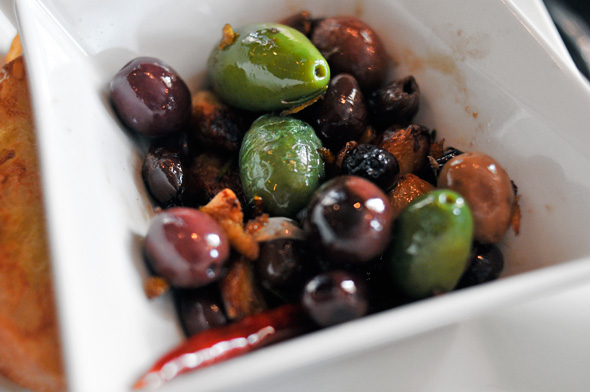 The Caesar Salad ($9), on the other hand, is a nice departure from the creamy mess that is sometimes pawned off as this dish. Here the dressing is nice and light, with only a subtle hint of the garlic that you might expect (this is a good thing if you've also ordered the meatball — it could be an overload otherwise). We also tack on an order of roasted olives ($7), which are comptent but boring (try the citrusy ones at Pizzeria Libretto for something a little more interesting).

If other dishes have exposed a young kitchen in search of consistency, the pizza has been solid (and mostly unchanged) from day one. Given that this will likely be the restaurant's calling card, that's a good thing. This is a slightly doughier version of a Neapolitan pie than I've had elsewhere (Libretto, Queen Margherita , and even Pizza e Pazzi ). Not a bad thing, I find that these pizzas are particularly resilient during takeout trips.

I'm a sucker for the classics, so I've ordered mostly the Margherita ($11, lead photo), which has yet to disappoint. While I find that the Fior di Latte is less creamy than at Libretto (again, my chief base of comparison for Neapolitan pizza in Toronto), that's not to say it's not close. In fact, given the more robust crust, I could see some folks taking this over Libretto's offerings. 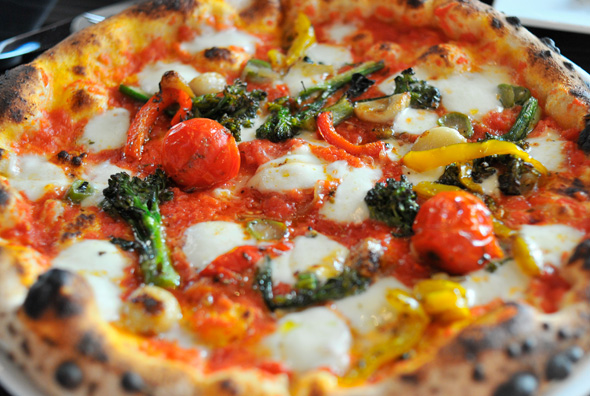 The one other pizza that I've ordered is the Ferdinand ($16), which comes with a host of vegetables, including brocollini, roasted cherry tomatoes, bell peppers, and caramelized garlic. The rest of the table is an immediate fan of this pizza, but it just doesn't taste "roasted" enough for me — with the exception of the tomatoes, the vegetables are too turgid and lack the garlic the description promises. That said, it's not as if I didn't enjoy it. I'm just looking for greater attention to detail here. 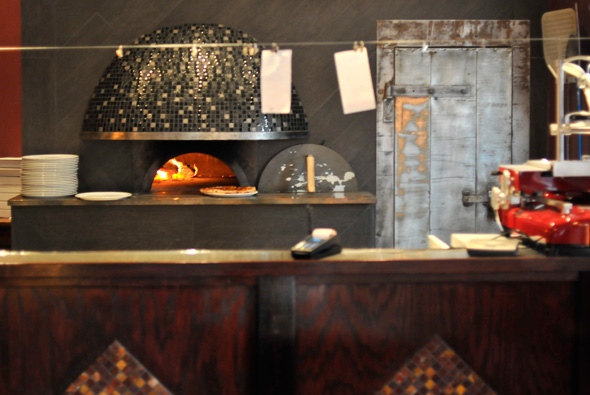 Picea 997 has recently introduced a series of main plates to their menu. The Lasagna, Pork Ragu and Chicken Scarpiello all sound promising. And given that the food has mostly impressed so far, I look forward to trying it out.

A final note. Now that you have main plates, it's time to beef up the wine list. Two bottles to choose from ain't going to cut it if I'm coming in for Sunday dinner. 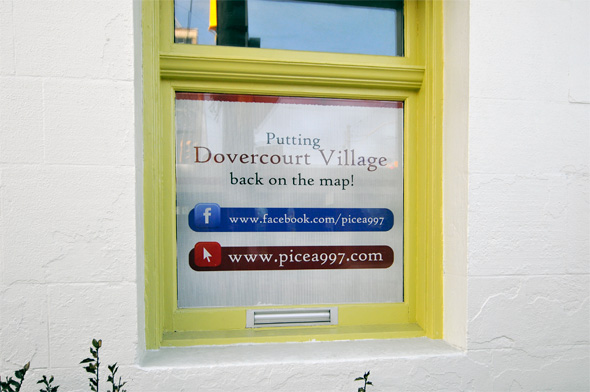