Over the years Peter's Cajun Creole Pizza has built up a loyal following. It's the only pizza joint in the city that dares to blend an Italian tradition with flavours from the Bayou. They separate their pizzas into three categories - Cajun, Traditional and Gourmet. The latter two offer up all the standard toppings ranging from pepperoni to sundried tomatoes so it's really the first category that sets these guys apart.

Tasked recently with serving a large, hungry group I decided to try them out instead of my usual option, Magic Oven , which incidentally opened its newest location around the corner near Queen and Parliament. While I've heard good things about their Cajun chicken wings ($11.25), it's not my mandate to mess around with some fowl so I place an order for two party sized pizzas from the Cajun menu.

For the vegetarians in the group, I select the Dixieland Vegetarian Creole ($26.80 - photo below) which comes with "sauce", cherry tomatoes, broccoli, oregano, asparagus and goat cheese. 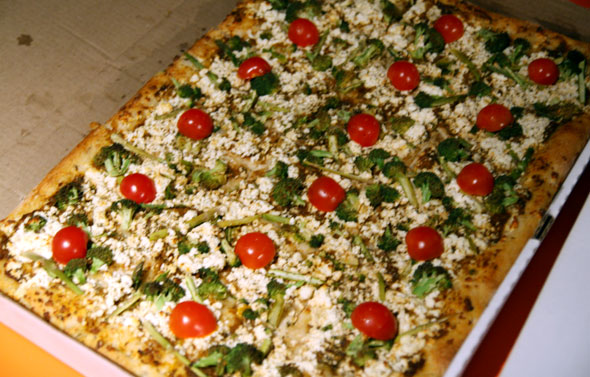 The other pizza (photo at top) is for the carnivores. I can't decide between the Seafood (toppings include crawfish, shrimp and mussels) and Gumbo Creole but finally settle on the latter ($31.30) which means a huge square of crust topped with "sauce", mozzarella cheese, sausage, gourmet peppers, mushrooms and prosciutto. There's also black olives (with pits) that aren't mentioned on the menu.

For the uninitiated, the sight of one of these pizzas might provoke momentary indigestion. They're not the prettiest pies in Toronto. But ultimately, it's taste that matters most. And the verdict? I asked the group to chime in with their thoughts. Here's what some of them had to say:

I had the veggie, which I liked. The crust was nice and crispy but with enough substance to have some flavour, and the tangy creole-ish spices were balanced nicely with the feta cheese. Could have used more veggie toppings! - Corina

I really dug the unusual spice flavouring on both the veggie and the meat slices. My one ciritcism is that there are certain parts of an asparagus stalk that just shouldn't be used on pizza (i.e. the hard part). - Jerrold

I liked the thin crust, the zesty cajun sauce on both pizzas and I really liked their attention to detail: a black olive and prosciutto slice on every square of the meat pizza and a lovely grape tomato on every piece of the veggie option. - Gary

I liked the veggie pizza, although it was a tad on the salty side. - Roger

The toppings of the veggie pizza were slightly lacking in flavour, but the crust was outstanding - I found myself eating all of it, which happens rather rarely. The meat pizza was pleasantly spicy and had an interesting combination of flavours. Seemed somewhat skimpy on the toppings, but the crust again wins high marks. - Tatiana

I was looking forward to Magic Oven, which I think is my fave pizza in the city. When we got this pizza I made a beeline for the one with the prosciutto. As soon as I got it my olive fell on the ground. Now, I don't know if the olive would've made that flavor better but I wasn't particularly impressed with it. I thought the crust was too thick and the tomato sauce bland. I ended up eating the prosciutto alone which I thought was really tasty. The veggie one fared better, I loved the cheese and broccoli bits. But if I had a choice between the new pizza or Magic Oven I'd say Magic Oven any day. - Jade

As for my opinion, the pizza was all gone by the time I found a moment to eat! I guess that means something. 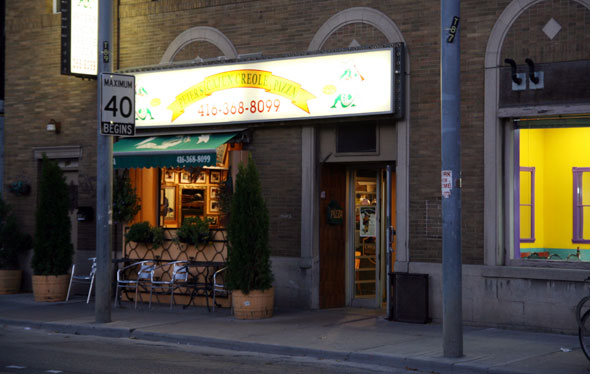