Peter Pan is newly reopened, now under the ownership of chef Noah Goldberg ( The Feasting Room ) who has restored the building to its former glory and done away entirely with the lacklustre menu of yesteryear.

The new first floor dining room from designer Jess Ingwersen retains much of its original charm. The renovation entailed stripping the entire building down to the studs, fixing structural issues and then refurbishing many of the original Art Deco fixtures and furnishings including the bar back, chrome stools, booths, hanging lights and ornate tin ceiling. Mesmerizing artwork by Debbie Lawson hangs on the walls. 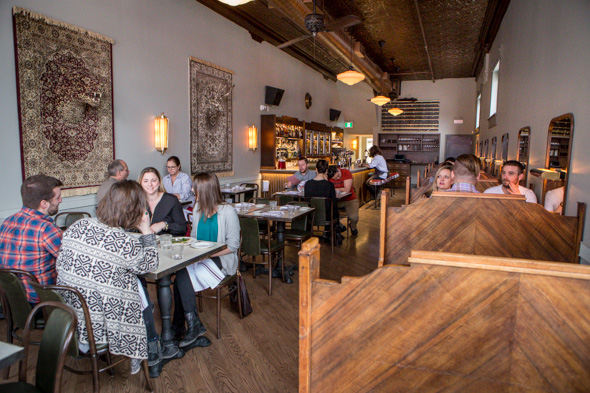 A private dining room on the second floor, and a multi-level patio are still in the works. Also to come is a cheese cart service that will be wheeled throughout the dining room for table side selections. 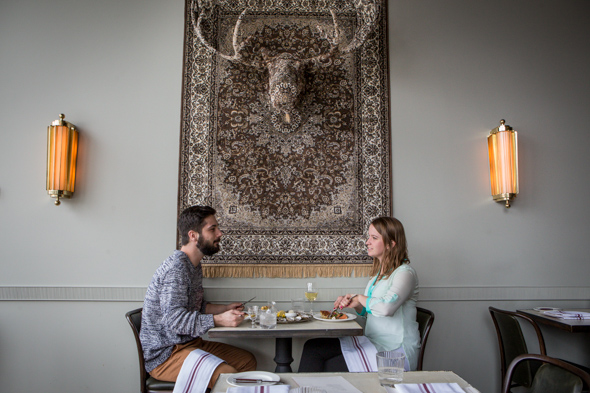 Like at The Feasting Room pop-up, Goldberg brings in whole animals, but rather than serve eight courses of one beast, here he offers greater variety of a la carte dishes. Expect the menu to change frequently as he works through every part of each animal, offering limited features when dealing in rare cuts - like the heart or sweetbreads. 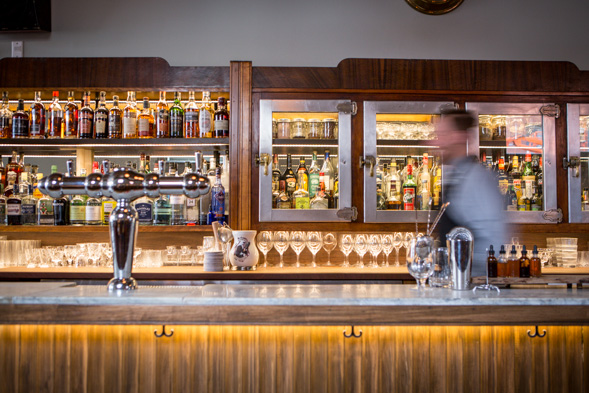 Once the second floor opens, groups can commission family style roasts or "take down a whole beast" if they choose, but downstairs expect an array of dishes in varying sizes from amuse and starters to entrees like roast lamb ($25) or halibut and chips ($26). 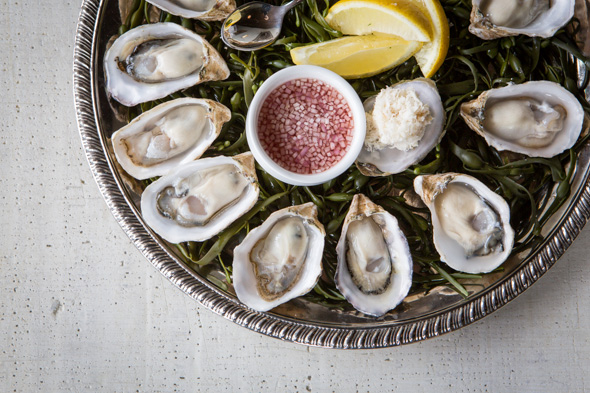 The menu opens with smaller bites like Kushi oysters ($3.50 each) served with freshly grated horseradish and a mignonette. Or there are Scotch quail eggs ($7) wrapped in pork, oozing with sunny yolk and served with house-made ketchup on the side. 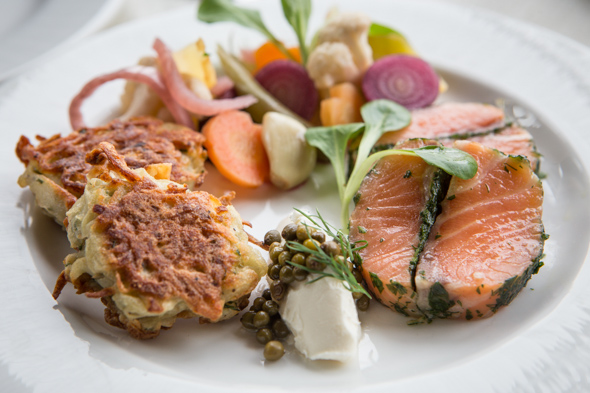 The salmon roulade ($15) is an example of the ephemeral joys found on the menu - by the time you read this it will be replaced on the menu, and even if it makes an appearance again, the succulent sous-vide salmon with pickles, house-made creme fraiche, and pickled elderberries might arrive with pumpernickel blini rather than the delicate mini potatoes latkes accompanying it tonight. 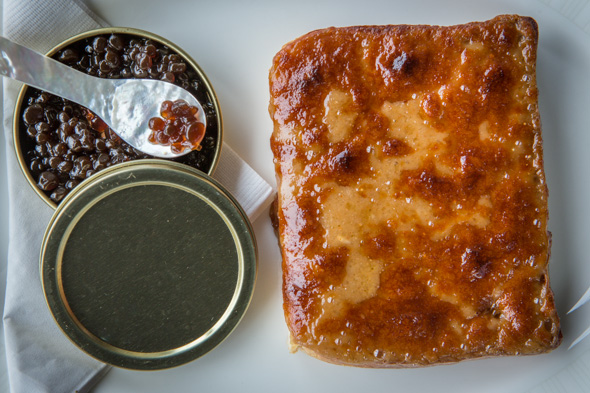 The Welsh rarebit ($10) is one of few "four season dishes" that will likely be a regular on the menu. This open-faced grilled cheese sandwich is made of Montgomery cheddar and served alongside worcestershire sauce pearls - an invention so ingenious and delicious that I'm hoping see these again, perhaps in a Caesar cocktail served with a bubble tea straw. 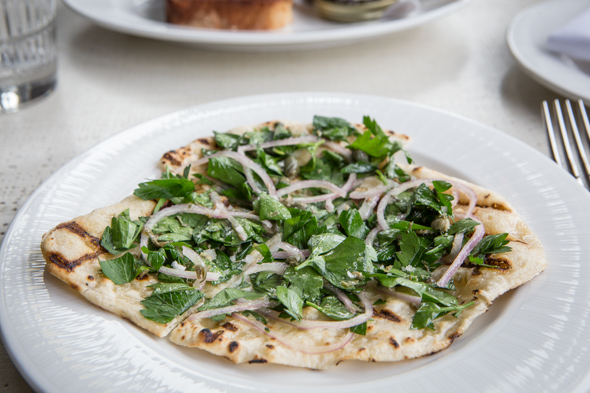 The bone marrow pizza ($10) is another menu staple that will appeal to those who think eating this delicacy by the spoonful is too grisly. Here the marrow is buttered over grilled flatbread and topped with a salad of parsley, pickled shallots and capers. 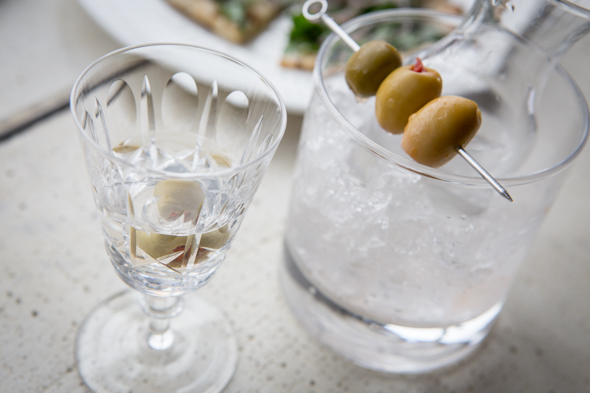 The bar menu offers a brief list of draught beers ($7-$8), wines by the glass ($8-$12), and original cocktails ($12), but the thing to get here is the classic martini. It comes chilled in a tiny vessel ready to be poured at full strength into a tiny sherry glass with plenty of olives. 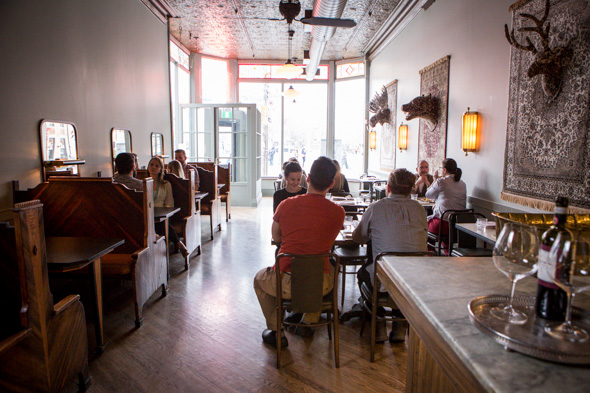 Expect brunch to be launched in the coming weeks that promises traditional fare with a heavy British influence. 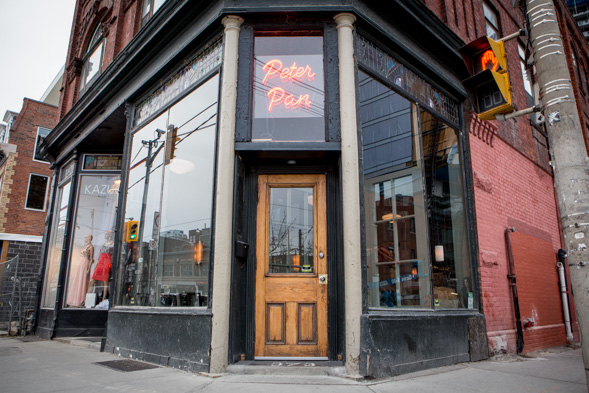 The Best New Brunch Restaurants in Toronto for 2015