Patty & Franks has been in the burger biz for a little over two months, crafting burgers and wieners for the people of Greektown who are either bored to tears with Souvlaki or who are really late in trying this whole gourmet burger thing.

Owner Vasilios (Bill) Andreopoulos knows a fair bit about both cuisines. He saw the flooded Danforth (and Logan) area already swamped with Greek restaurants and decided to shake things up by creating what can be called a 'customized upscale version of Harvey's' in the pun rich Patty & Franks moniker. 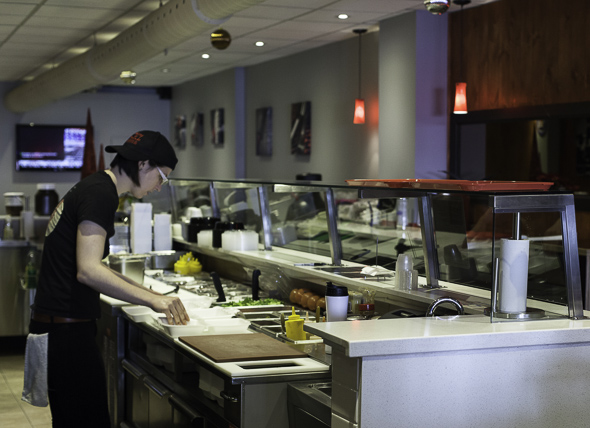 When Maras Gyros folded after a brief stint in 2012, Bill jumped on the space and converted it into a glistening burger bar complete with charcoal smell and a giant logo emblazoned on a floor to ceiling wooden wall that greets you as you walk in. Word to the wise though, in cold temps retreat to the back of the space, the door area is drafty enough to keep your milkshake frozen throughout your meal. 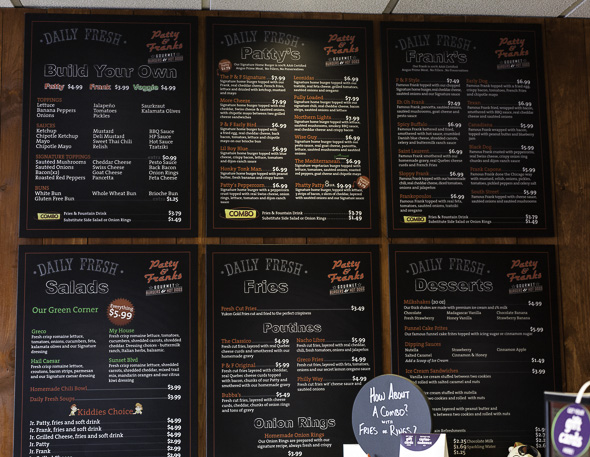 Now, onto the real meat and potatoes, meat and potatoes! Burgers are still riding high on the popularity ranks and Patty & Franks does them well. The burger pattys aren't huge, but the prices aren't either. A decent burger combo is going to set you back $12 or so, a few bucks more than a Big Mac combo these days. The devil is in the details, though. Bill sources his meats carefully, ensuring only 100% AAA certified prime Angus with no hormones or preservatives. 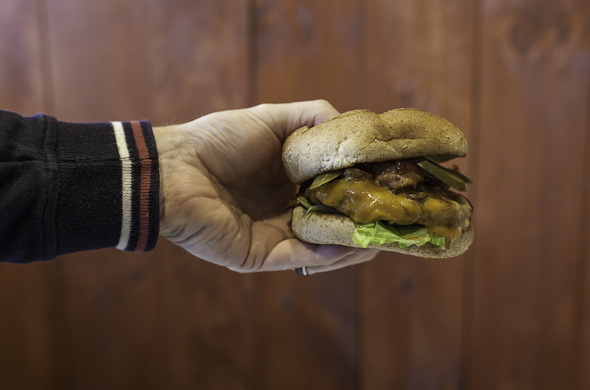 We could have put together a completely custom burger, but instead opted for the Northern Lights ($7.99). After choosing our bun (brioche, white, whole wheat or gluten free) we grab a seat and wait for them to call our number up (we waited 5 mins max, during the lunch rush). The burger is assembled per the ingredients listed: bacon, sautéed mushrooms, and cheddar cheese are all piled on top, and then we can add whichever other ingredients look lonely (hi, pickles).

The burger is a hand formed marvel. Spiced carefully, it`s a perfect mash up of salty with a bit of savoury kick. This is no dense, meat-shaped hockey puck of a burger; instead it`s lovingly pressed together, resulting in a very flavourful bite that practically falls apart in your mouth. 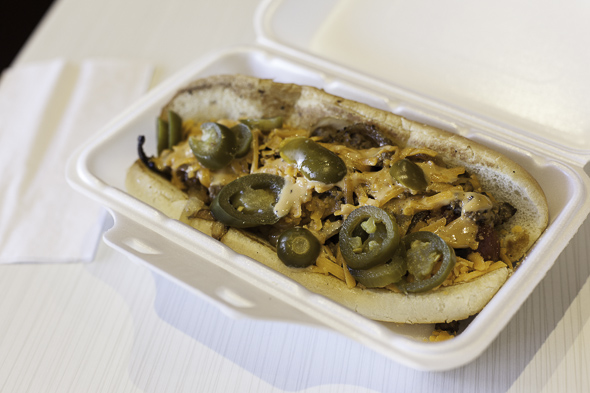 The franks are decent too. In a moment of desperation deciding between having a burger or a hot dog, the solution was easy -- a hot dog with ground up burger bits on it, a.k.a. the P&F Style ($7.49). Also in the mix was cheddar cheese, sauteed onions, signature sauce, and some heat from my add-on jalapenos. We grabbed a Jr Frank combo and fries ($4.99) just to try the hot dog on its own as well. The wiener itself was juicy and remarkably beefy, so big points there. 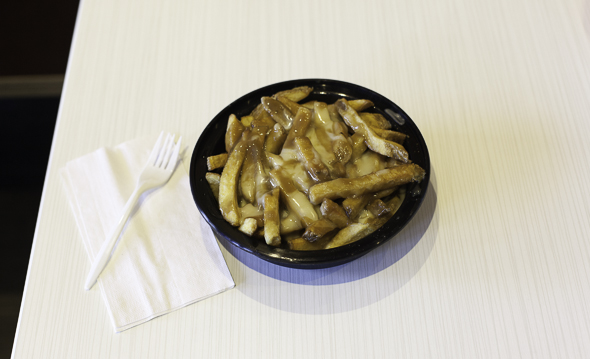 Classico poutine ($4.99) was a tub of fresh hand cut fries, beef gravy and curds. Nothing Earth shattering here, but it really lives up to its name, curds from Quebec and good gravy. Fair enough! For those looking for something bolder, there are five other poutines to try, notably the P&F original ($5.99) that comes stacked with burger bits and bacon. 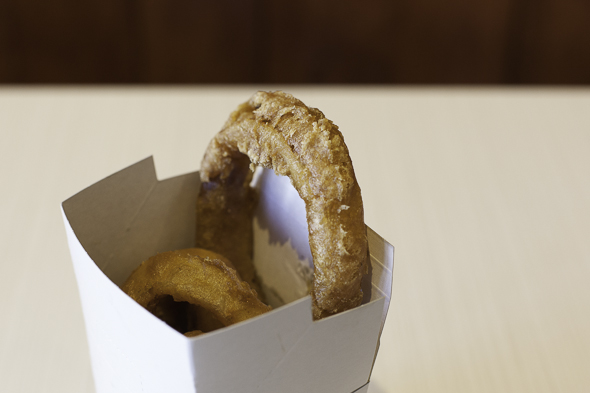 Onion rings ($3.99) are not to be missed. With a homemade batter, these rings come straight out of the fryer and into your heart (for better or worse). Crispy, crunchy batter makes a better ring and these are the best I`ve tried in a while. 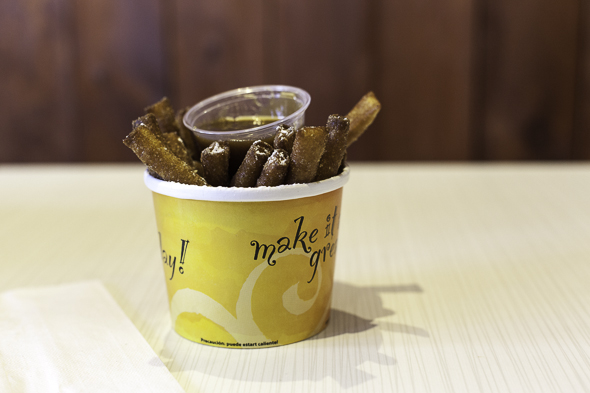 Desserts don`t escape from the deep fryer, and that's a good thing (thanks Martha!). Funnel Cake Frits ($4.99) are just as they sound, tiny fry shaped batons of funnel cake, deep fried, gloriously tossed in icing sugar (or cinnamon sugar) and served up with a ramekin of warm caramel sauce. I grabbed mine to go, and even in -10 temperature, these bad boys stayed crispy until they were gone.

Milkshakes qualify as dessert too, right? Here they come in 20oz portions in six different flavours. We tried the strawberry banana and straight up chocolate (both $4.99). Made with 2% milk and ice-cream, they were decadent without being too thick and unfinishable.

With a few subtle nods to Greektown (Frankopolous wiener anyone?), Patty & Franks is doing a good job fitting in, but still being a trailblazer. My only David Suzuki-esque complaint would be to forgo the Styrofoam everything and try and provide more sustainable packaging/plates. 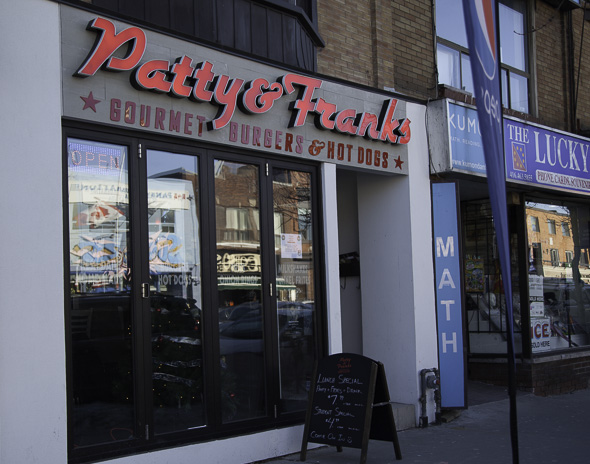