Pastor Taco is open for takeout and delivery. Masks are mandatory and hand sanitizer is at the counter.

Pastor Taco serves bean, chicken, and pork tacos each coming with a range of house sauces, as well as vegan ice cream and popsicles.

The storefront on Gerrard Street draws in people most often during their lunch break in search of some quick, yet delicious grub, selling four tacos for $10 and $11 if you want chicken. 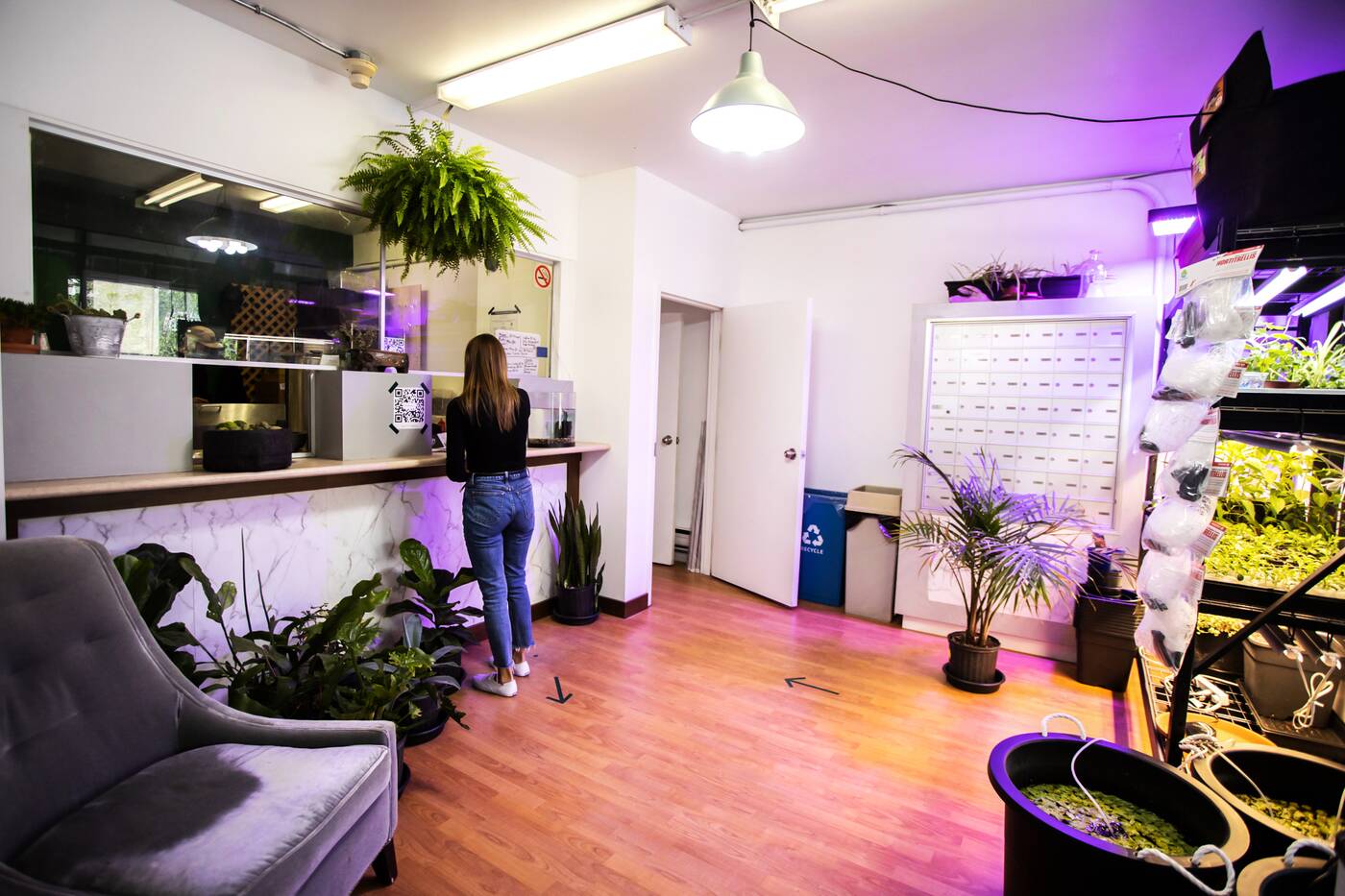 Plenty of succulents, microgreens, and hydroponic plants that are growing within buckets of water versus soil fill the space making it feel a bit more like a greenhouse than a taco shop. 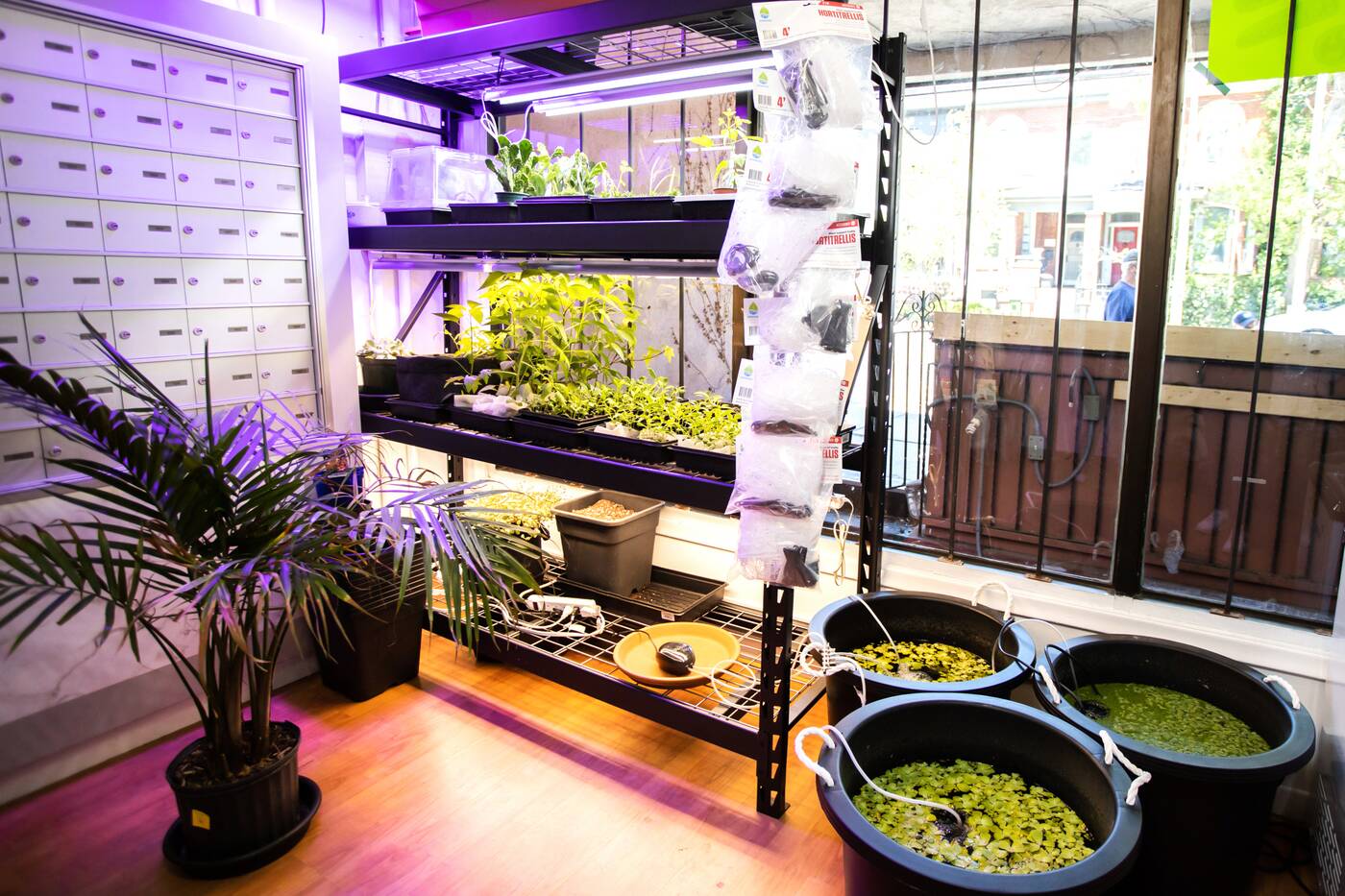 But the smell confirms that you've come to the right place for al pastor, the plants are just a side-hustle. 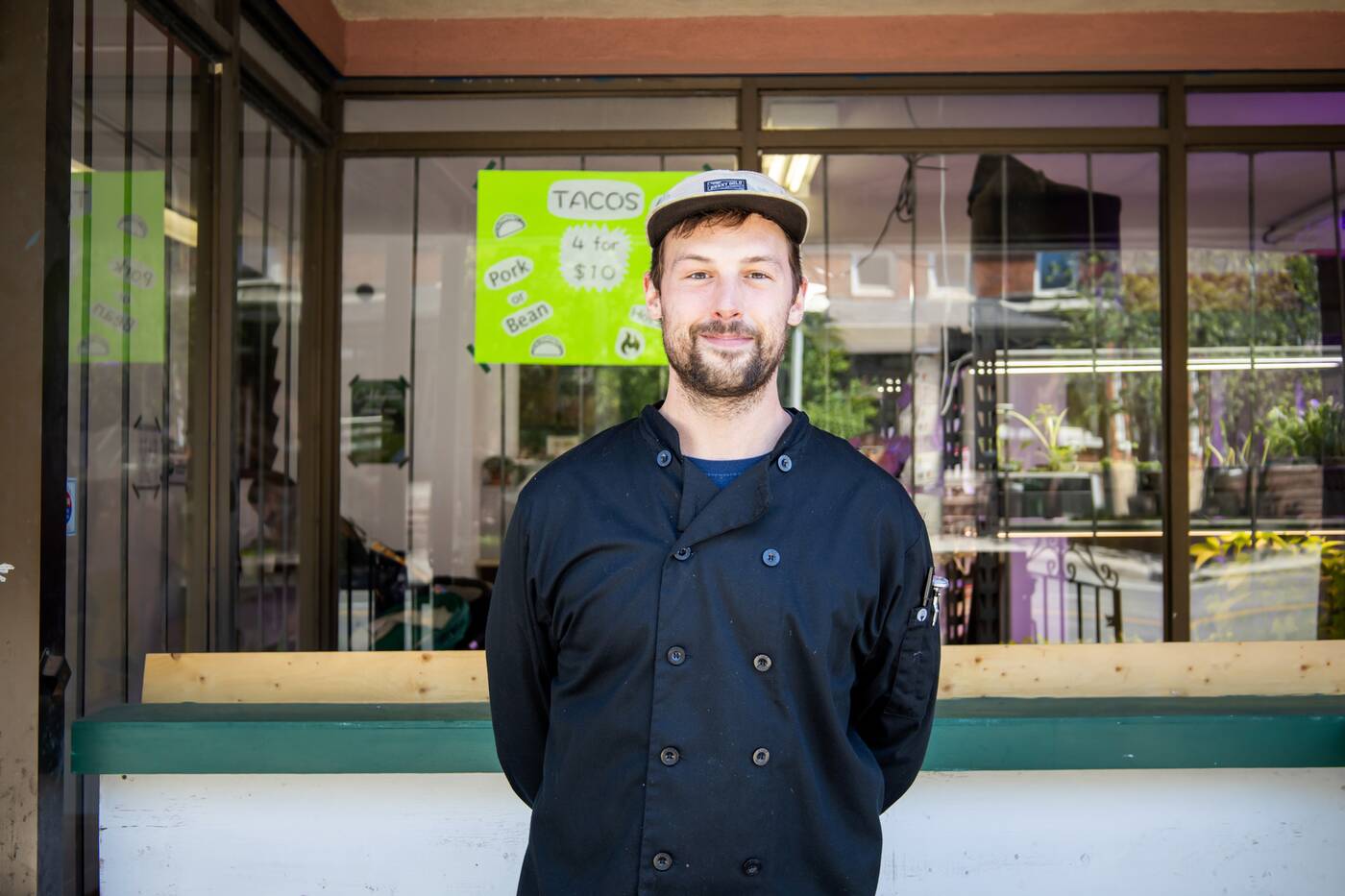 Trained as a restaurant inspector, West Spencer has worn a number of different hats from running the wholesale department at Rodney's Oyster House and teaching gardening and wood-oven baking at Riverdale Farm to starting his own hydroponics and aquarium business.

And now, he wants to cook up his all-time favourite food for the people of his neighbourhood. 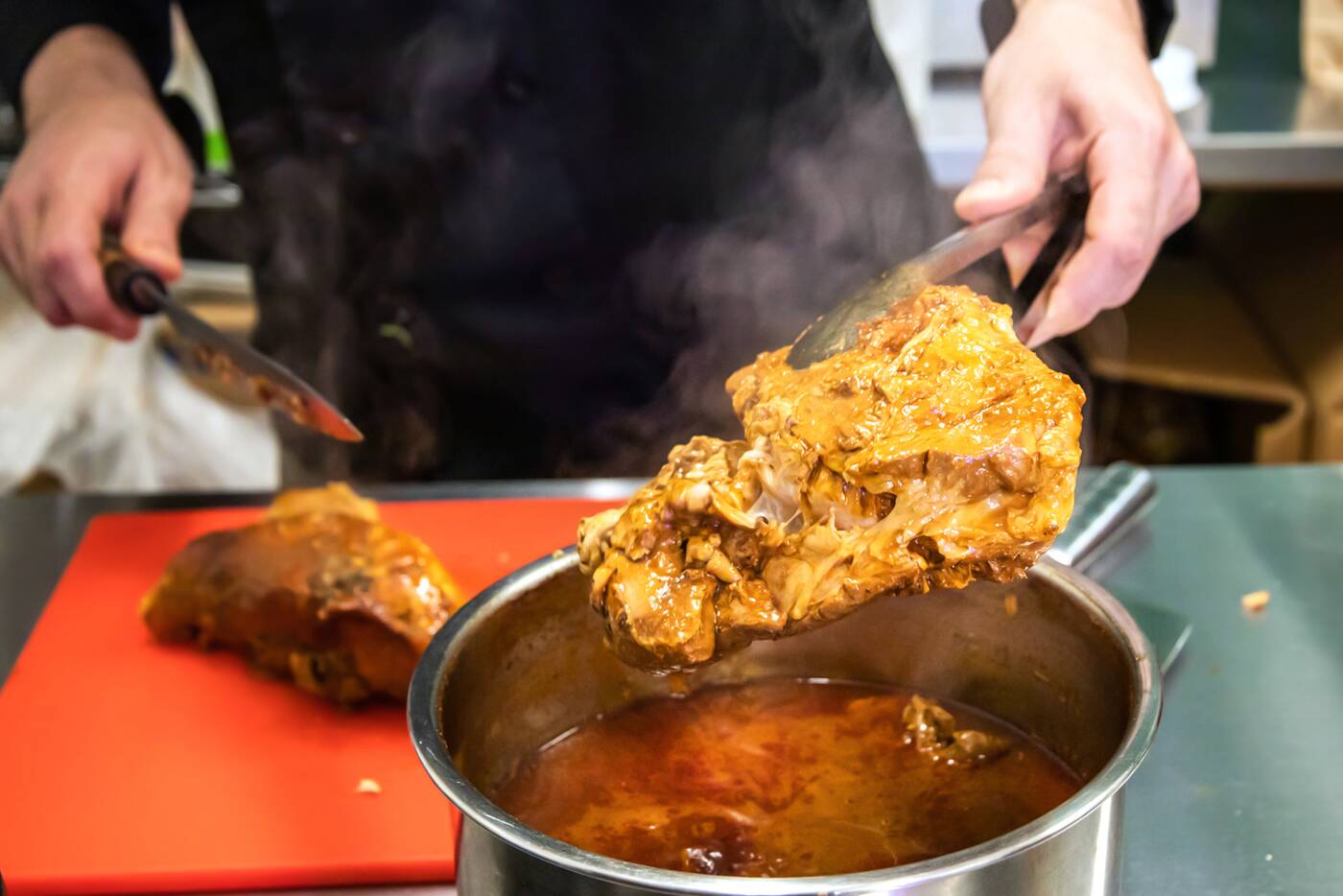 Pretty well everything on the menu is prepared fresh by Spencer. The pork for the al pastor is braised in a pressure cooker for three hours in a tomato base with a mix of chilies. 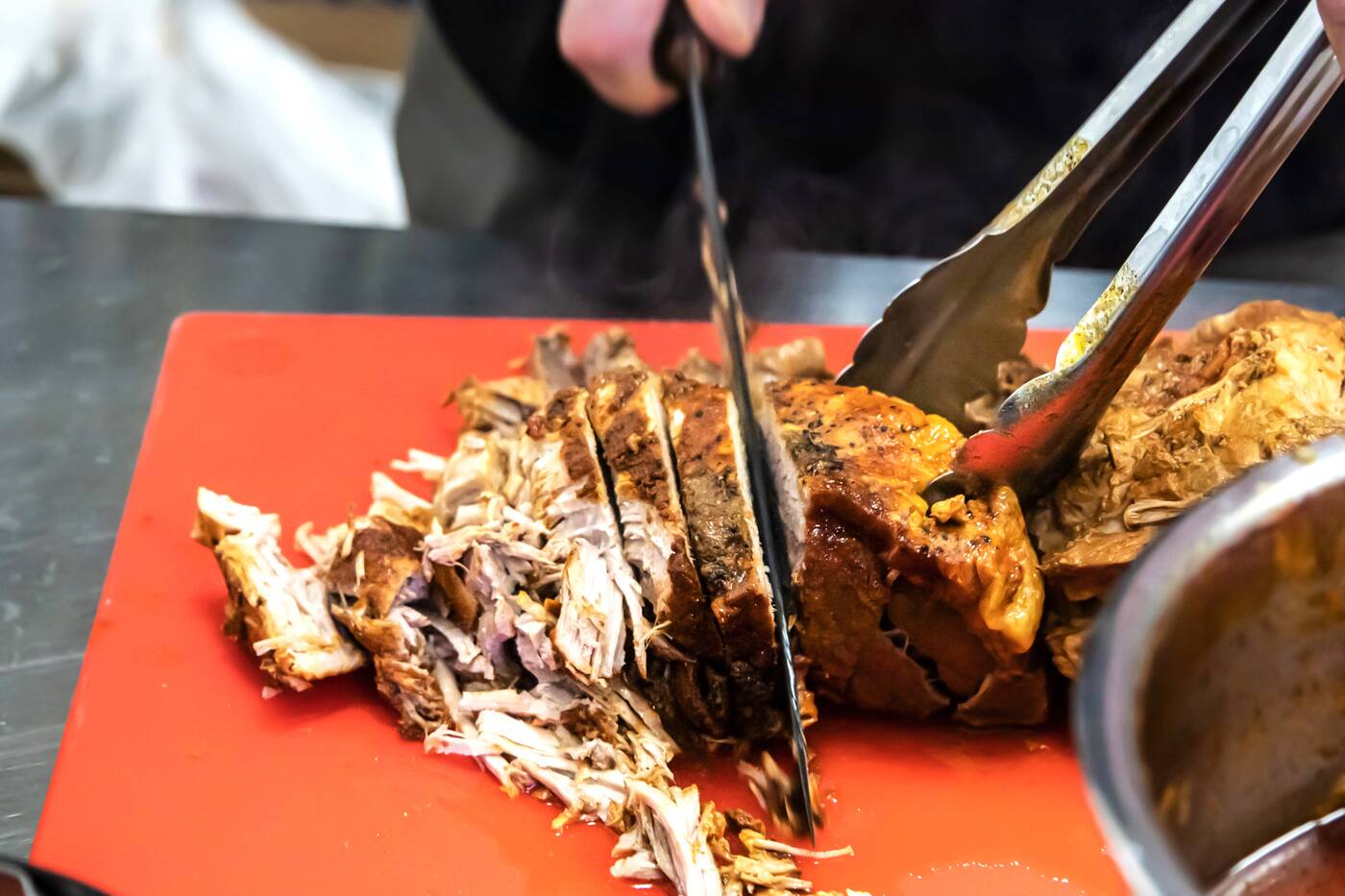 Although the filling for tacos al pastor is typically prepared with spit-grilled pork on a skewer, I'm told this process gets pretty close to the traditional taste without the grill. 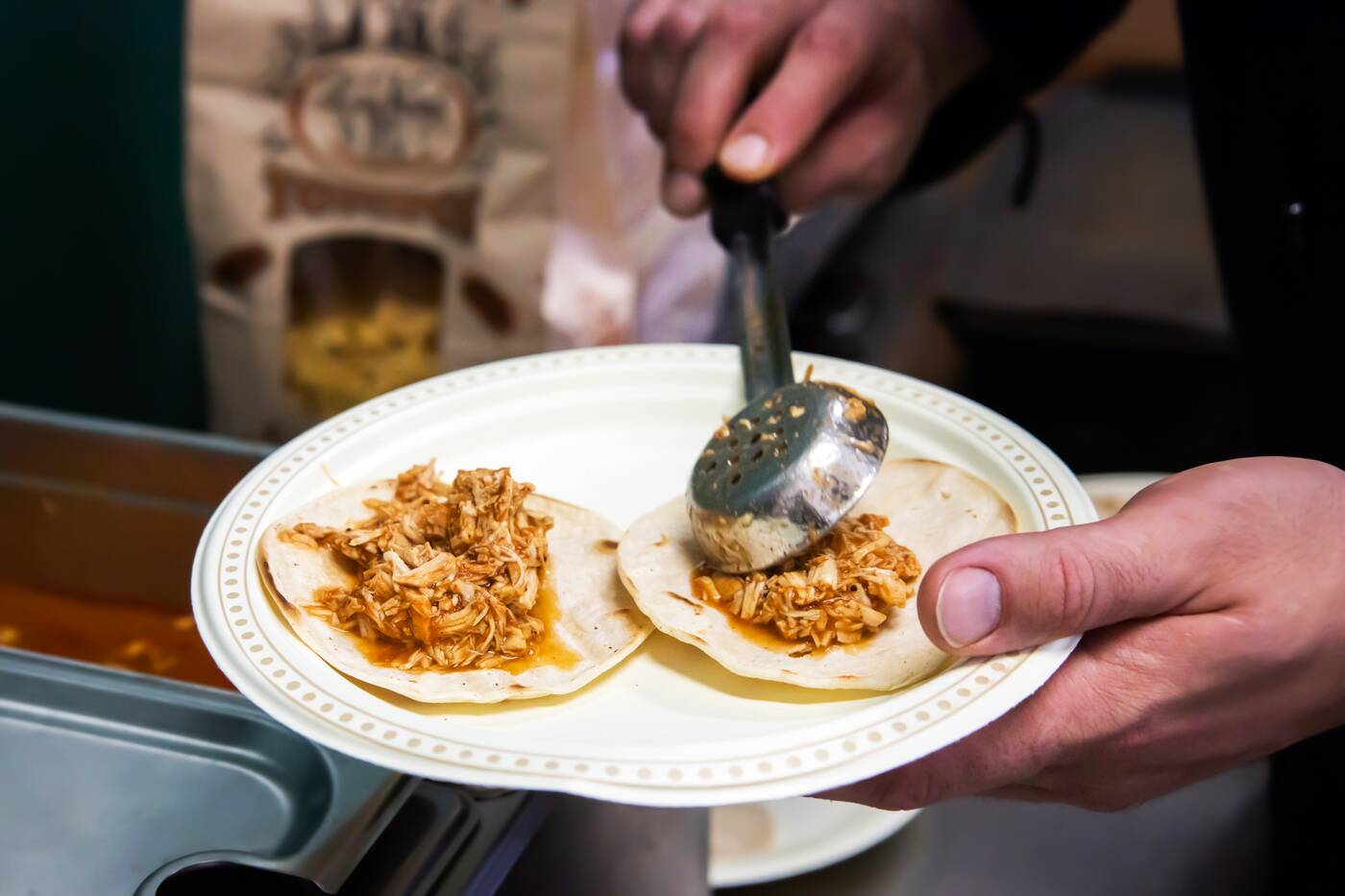 Also made every day is the chicken. It's made with chilies and achiote seasoning, coming from ground annatto seeds it gives off a bit of an earthy flavour. 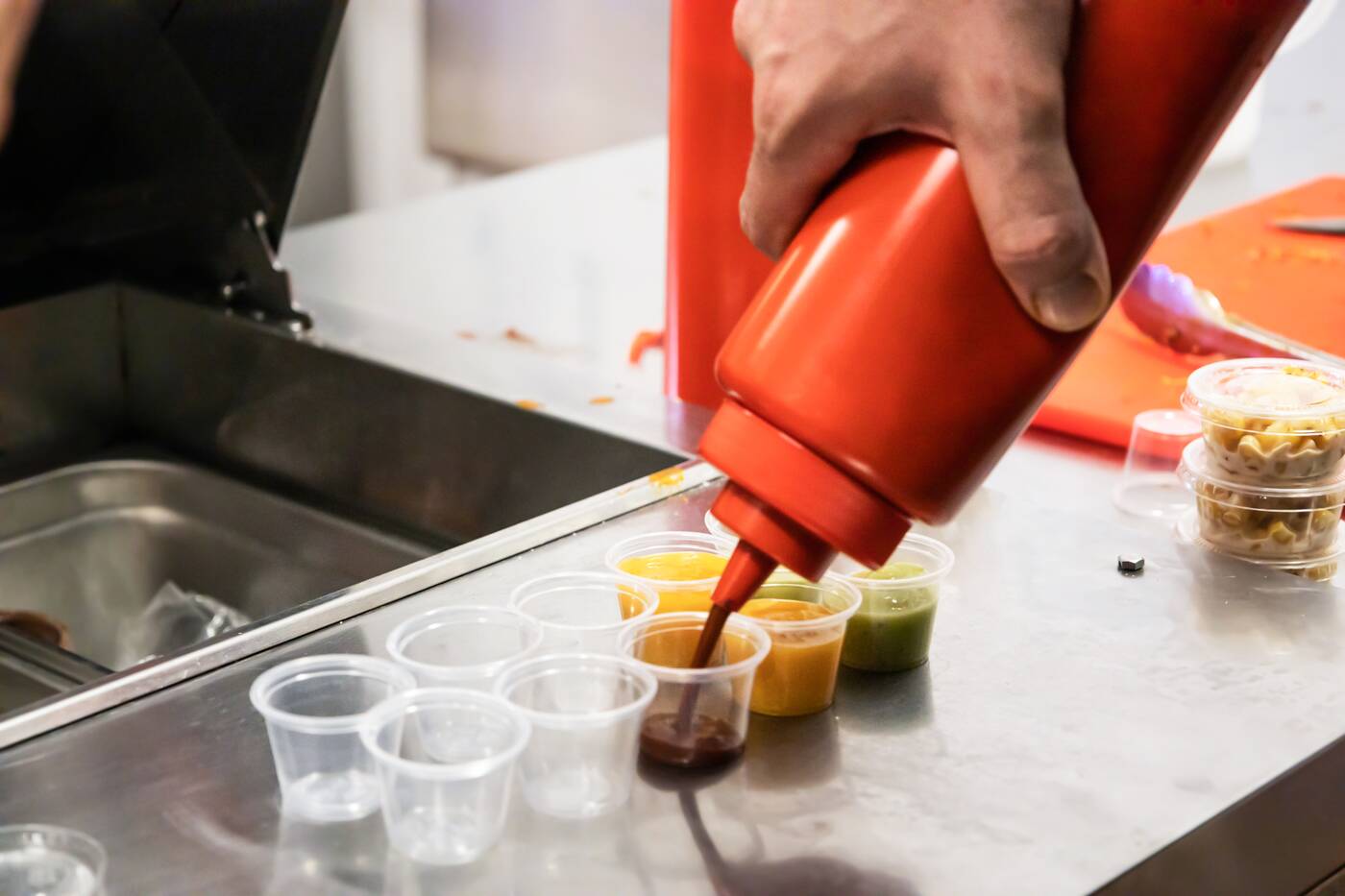 A trio of Spencer's homemade sauces will come on the side, which he's been working on since he was a kid.

You've got a mild with guac, a medium with yellow Peruvian peppers, and a hot with three kinds of red chilies. Unlike some other hot sauces I've seen, they don't come too watery or tend to separate once settled. 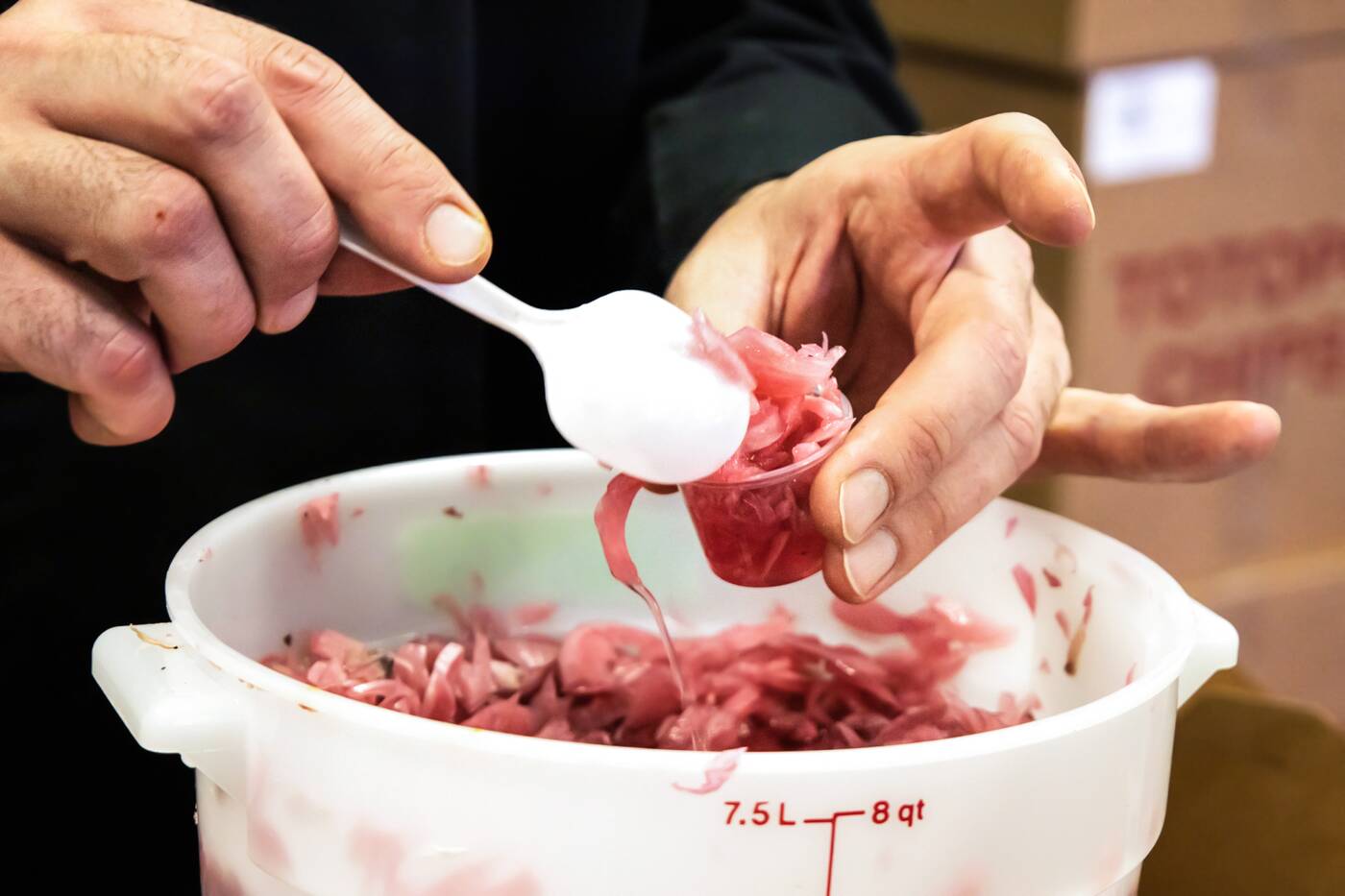 Besides the sauces that tend to steal the show, every order of tacos also comes with pickled onions, cilantro, and fresh microgreens to add to the flavour. 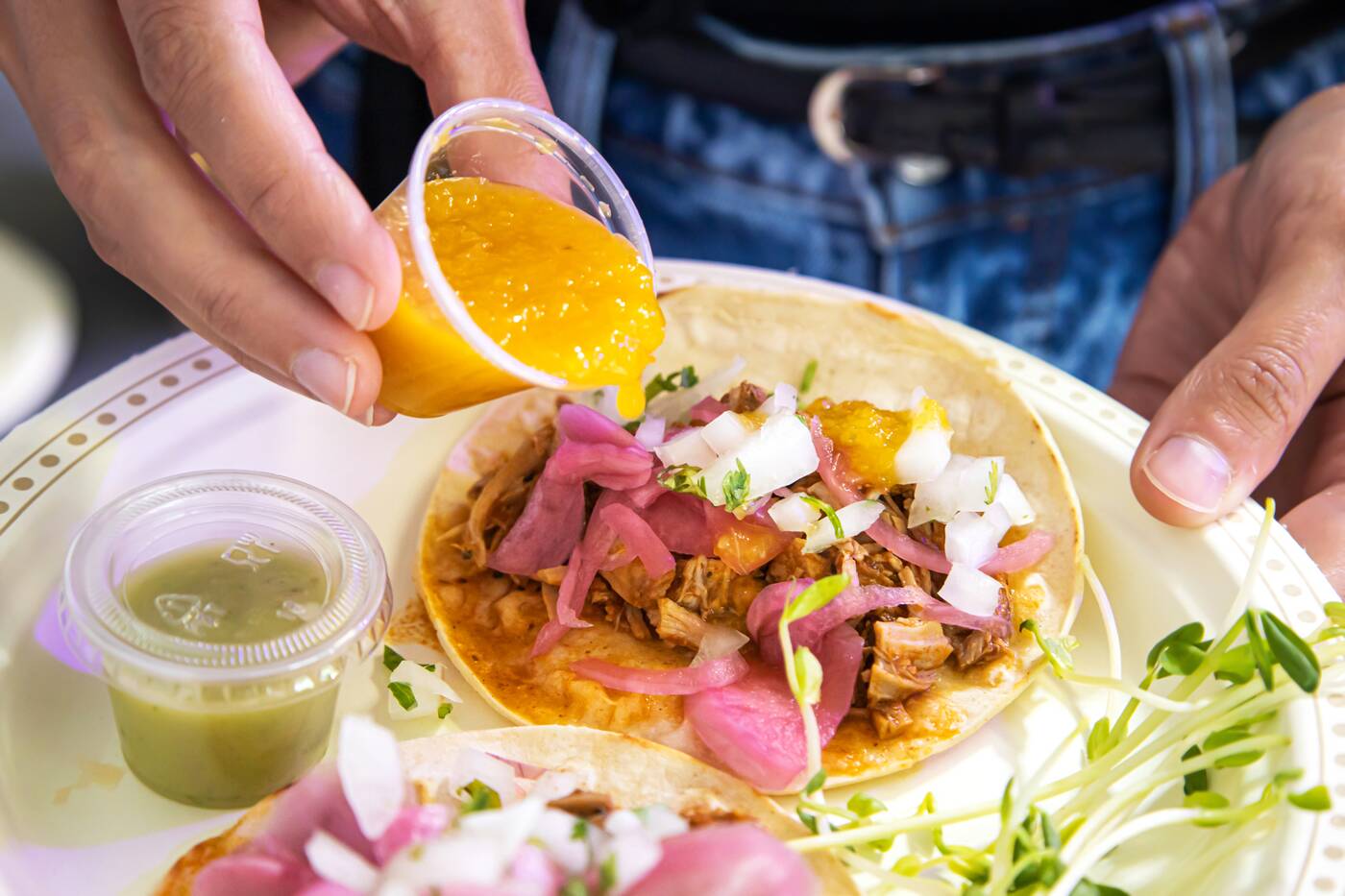 Although the meat is loaded with flavour, the chicken and pork tend to be light on the spice. So, if you like your tacos hot that's where the trio of sauces come in. Even the hottest one provides a manageable heat that intensifies with time. 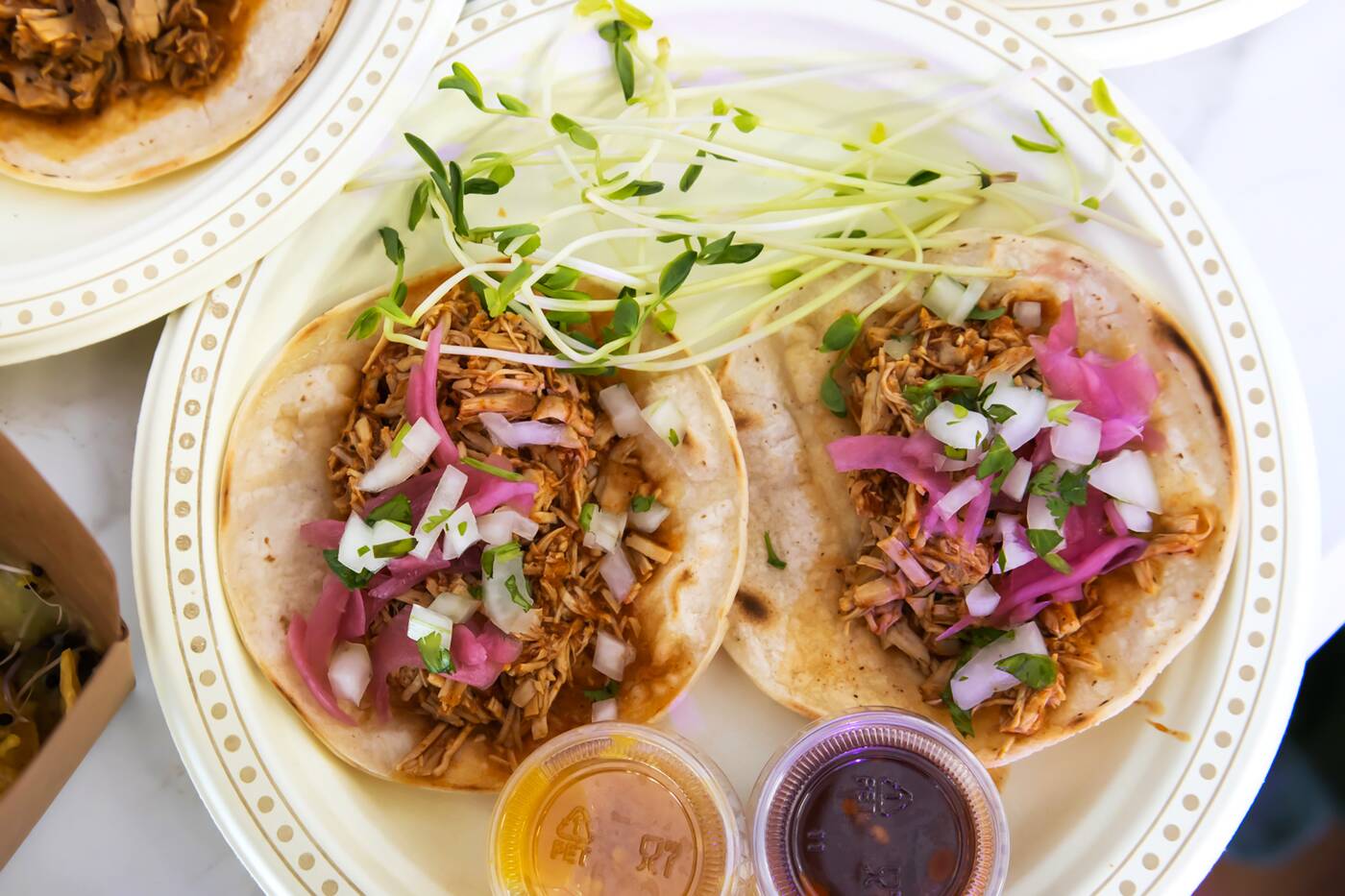 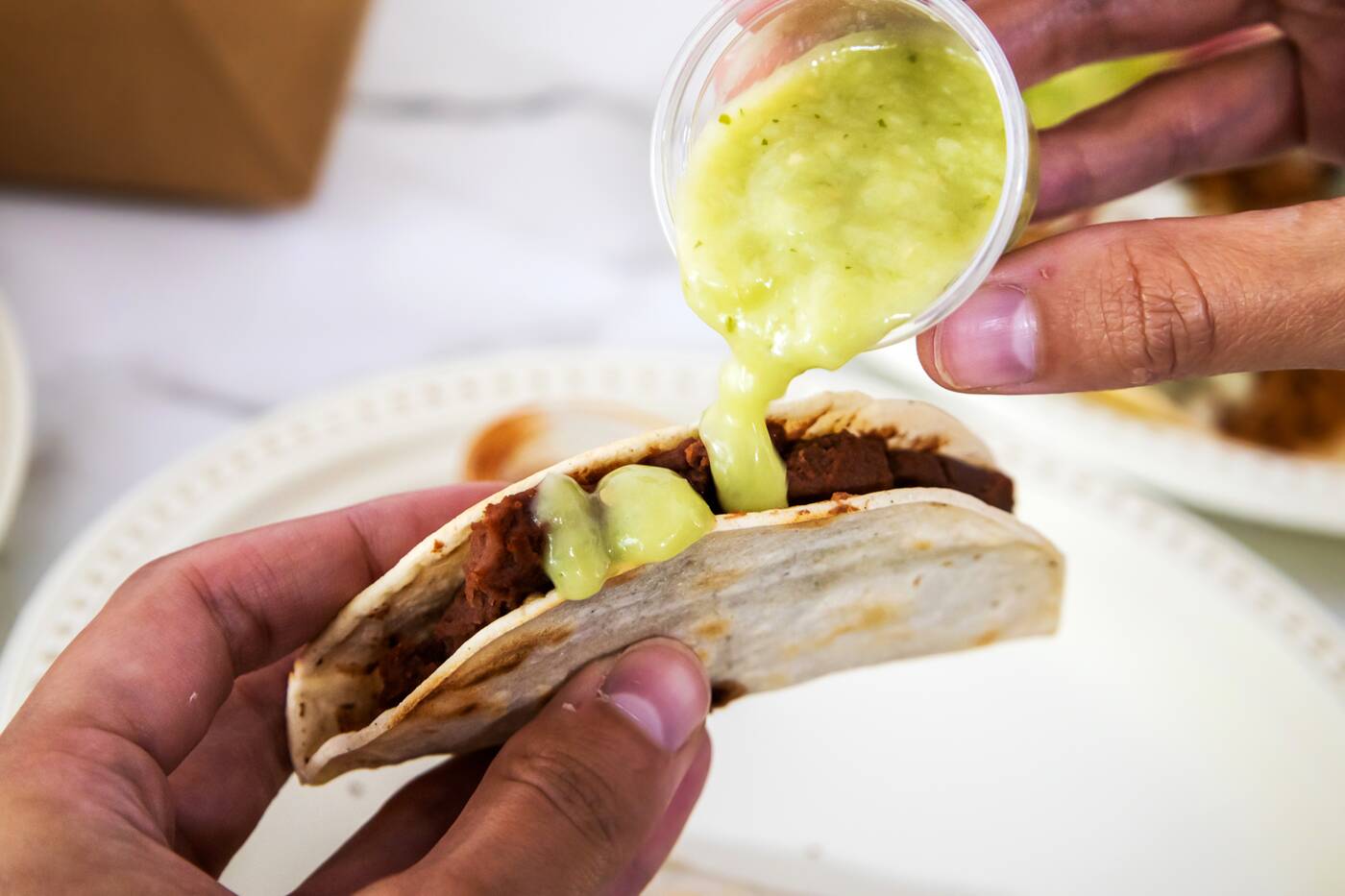 The bean taco provides a vegan option made with Ducal refried beans from Guatemala and can also be dressed up with the offerings on the side. 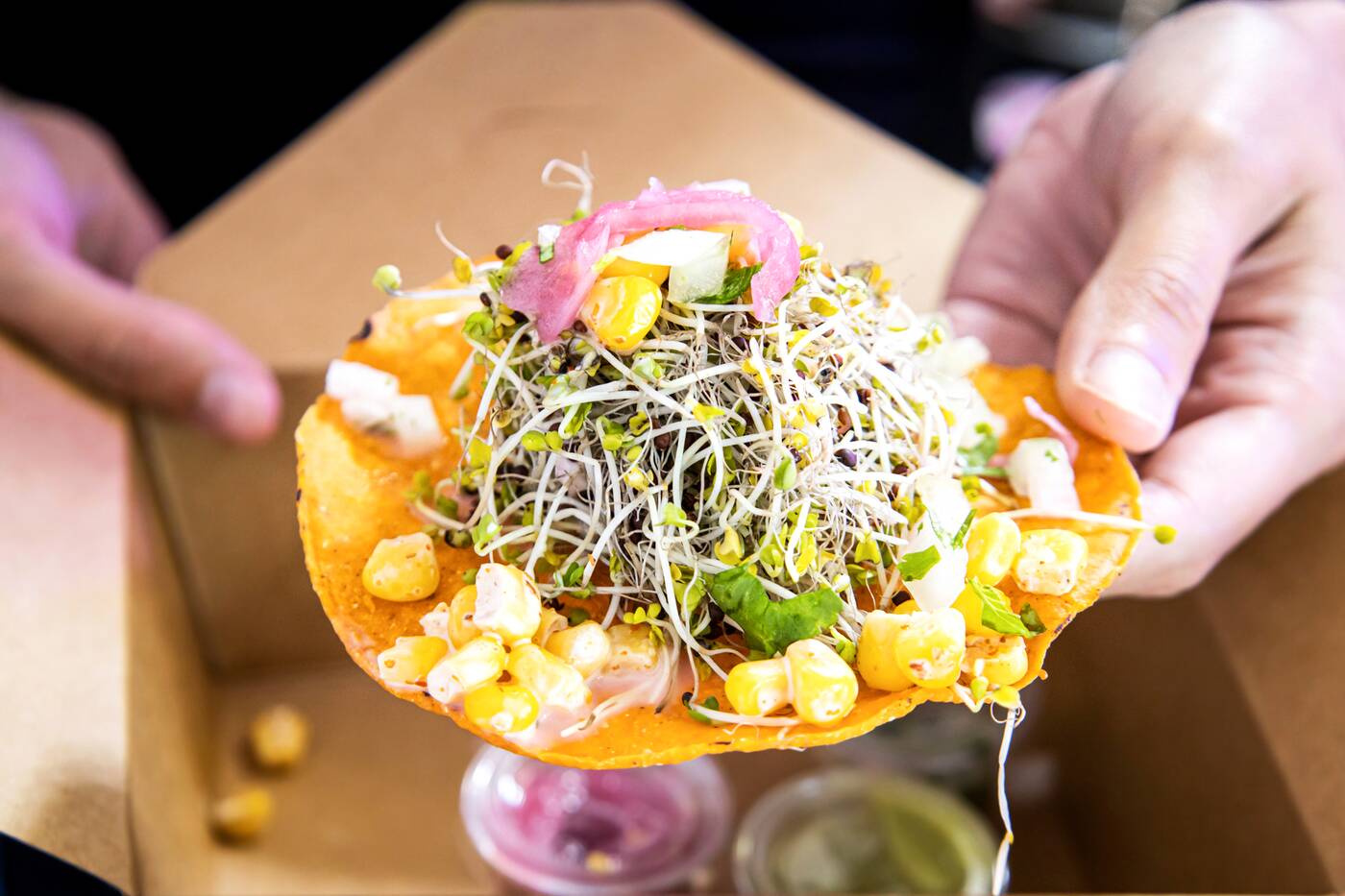 The tostada ensalada ($3.50) is one of the small side options. It comes with a pile of microgreen leaves on a crunchy corn tortilla with corn, guacamole, pickled onions, cilantro, and a vinaigrette for topping. 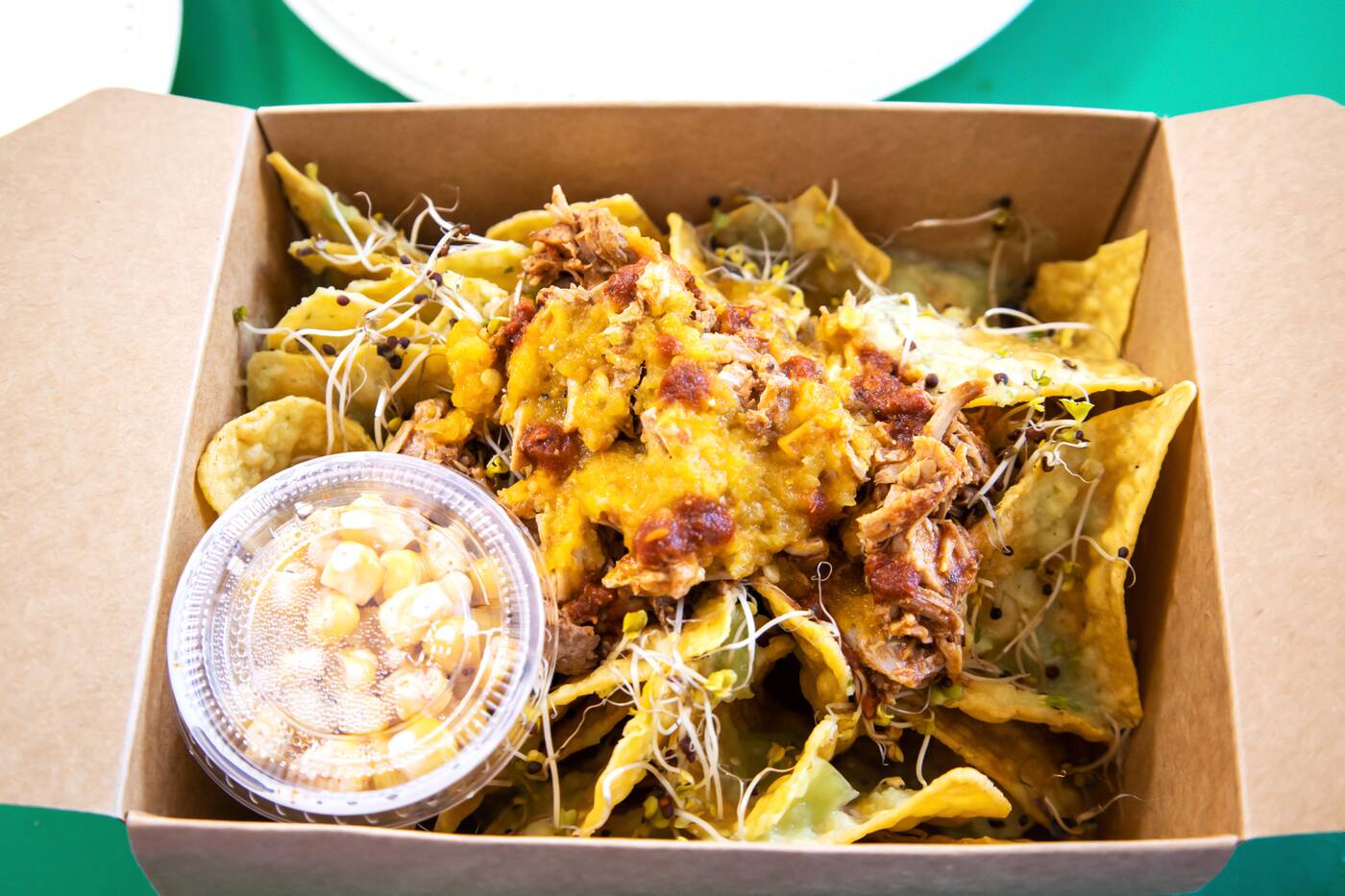 They also serve nachos ($12) with dairy-free cheese. You have the option of adding pork or chicken to the corn chips (imported from Mexico) that already get corn, microgreens, and a bit of the mild sauce. 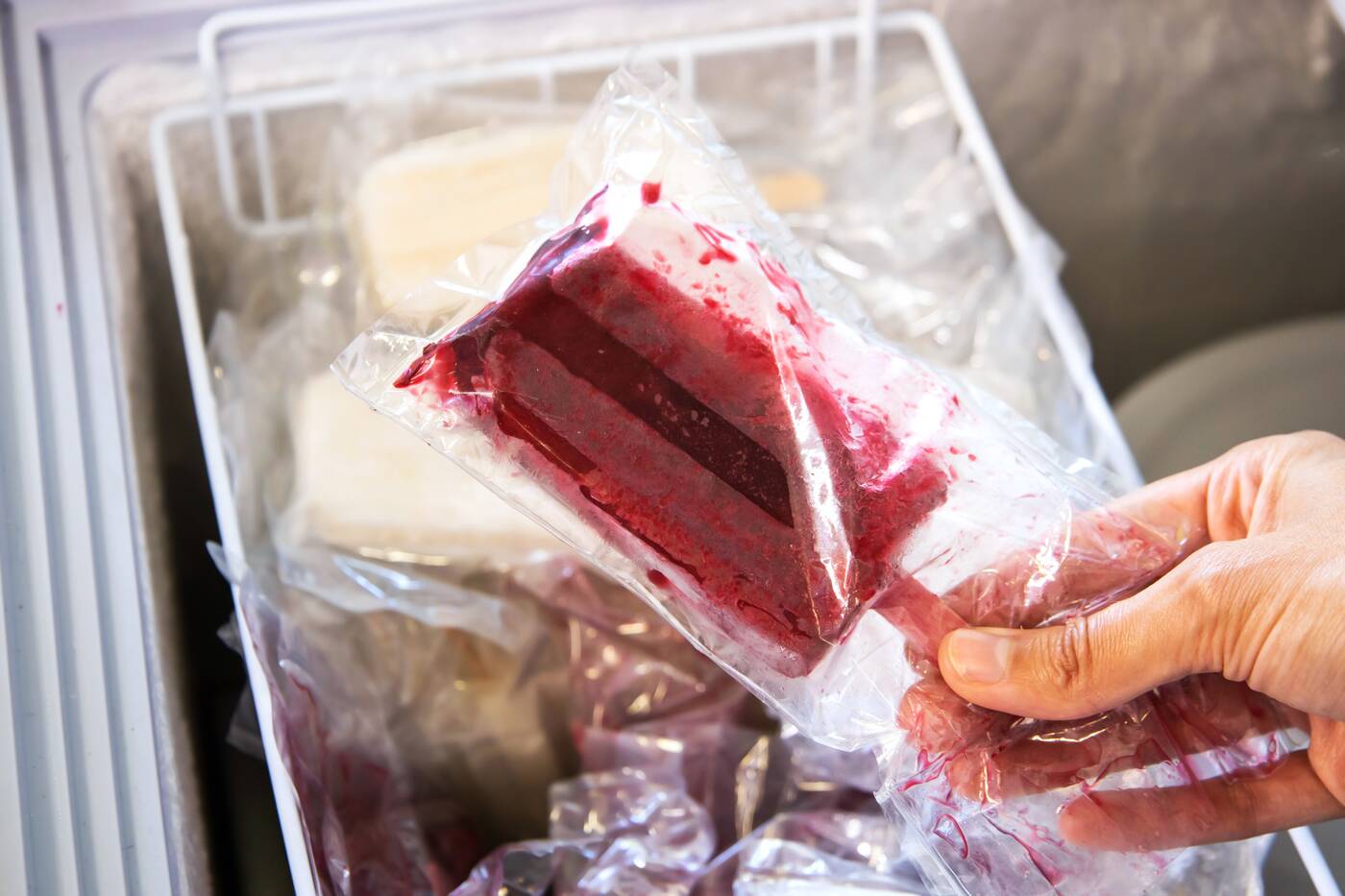 When it comes to something sweet to finish things off with, there are housemade popsicles ($2) in the freezer in flavours like hibiscus, mint and lime, mango, banana and coconut. Or a few scoops of vegan ice cream can be ordered at the counter. 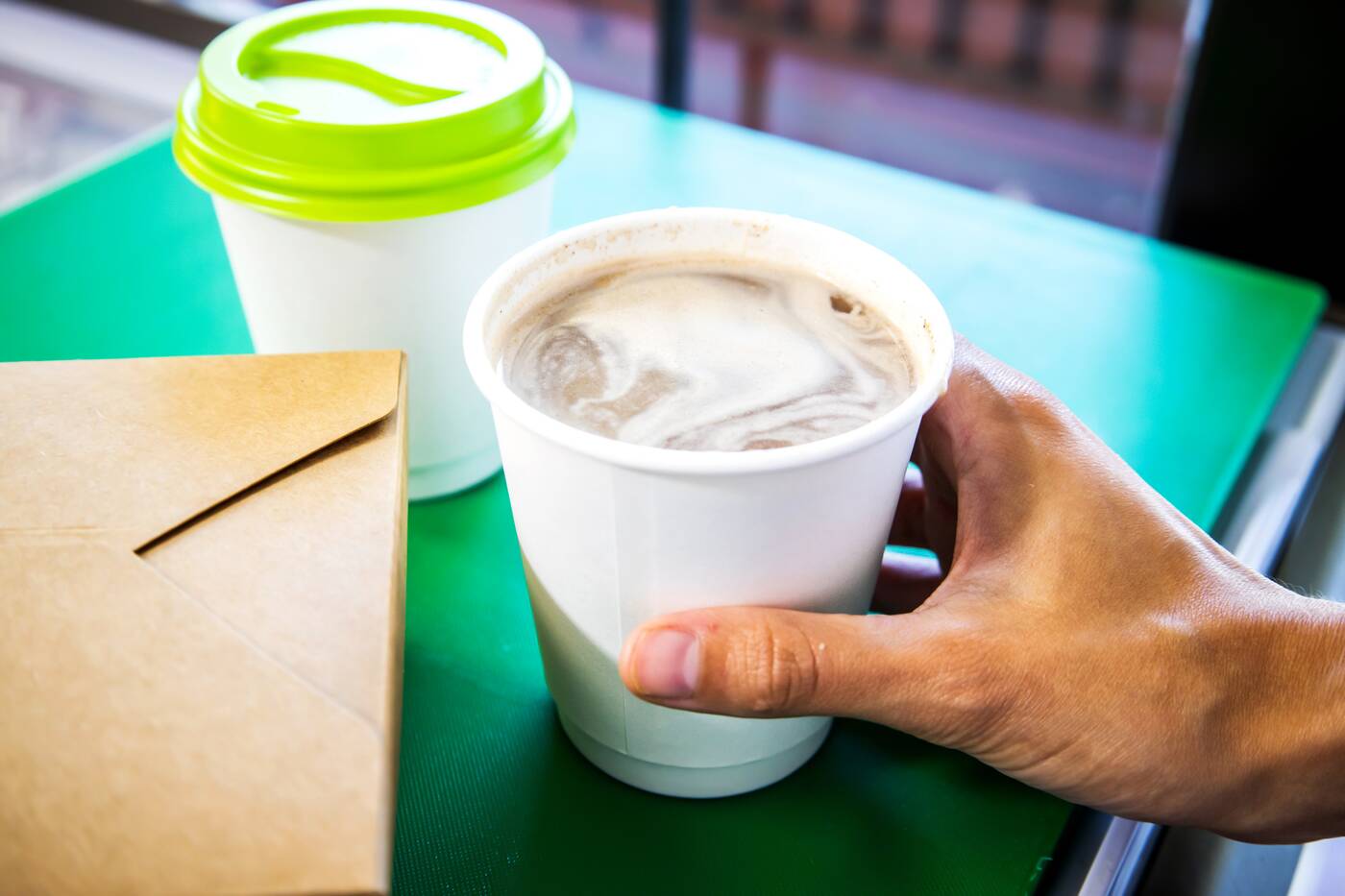 If something warm and caffeinated is more what you're after, go for the horchata latte ($2). It combines a medium roast percolated-style coffee with the creamy rice-based beverage that comes out of Mexico. 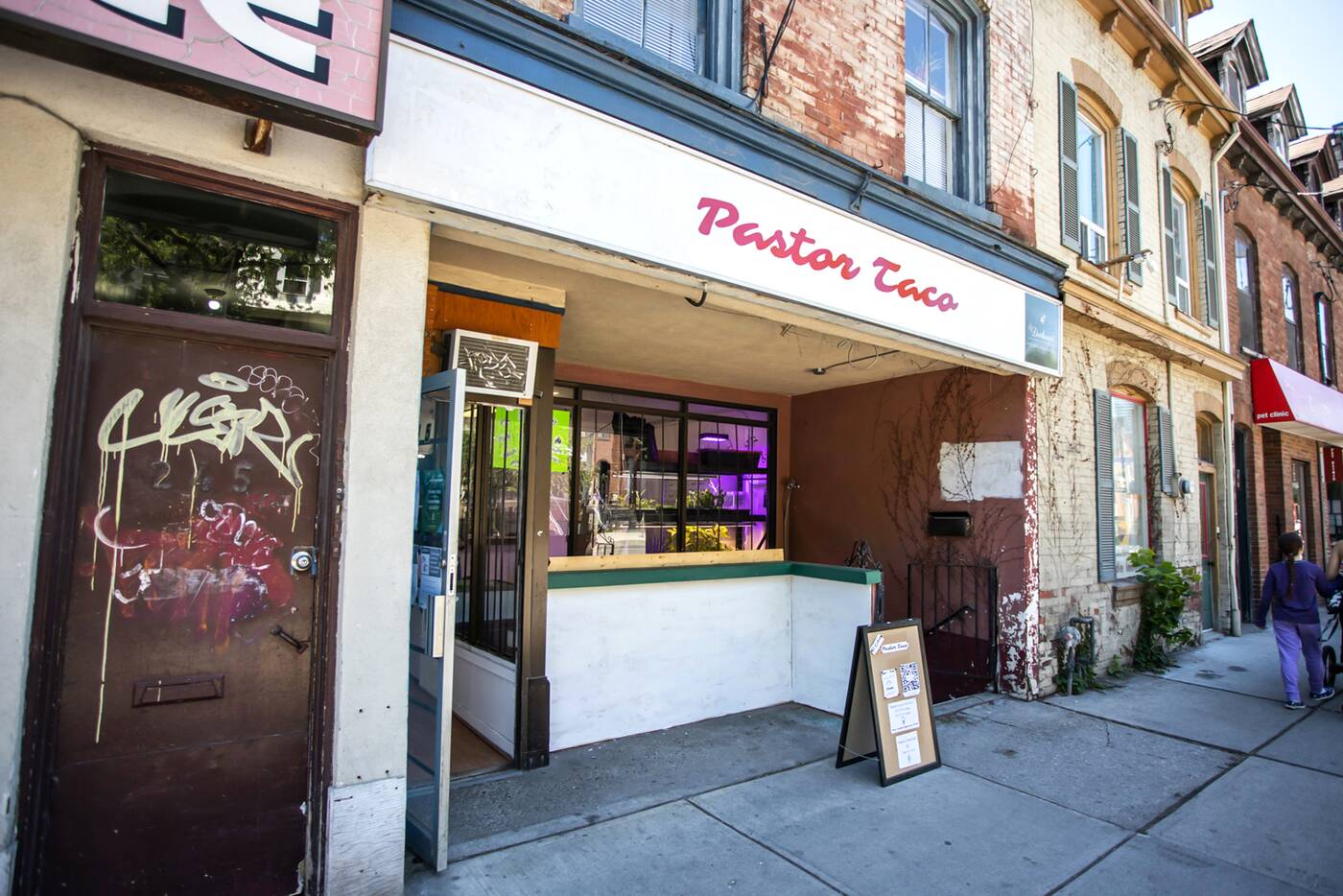