Paradise Farms Cafe recently opened their first of many (at least that's the plan) farm-inspired eateries in the condo-filled Bayview and Sheppard area. Owned by real estate mogul Shane Baghai, the cafĂŠ unsurprisingly is the flagship tenant in the St Gabriel Manor condo development.

Named after his Caledon area farm, Baghai recently became motivated to enter into the restaurant business after his wife was encouraged by doctors to eat a hormone-free diet. While the use of HGP (hormonal growth promoter) is rampant in the farming industry, Baghai vehemently bucks this trend and insists his meat instead be local, delicious and sustainable. 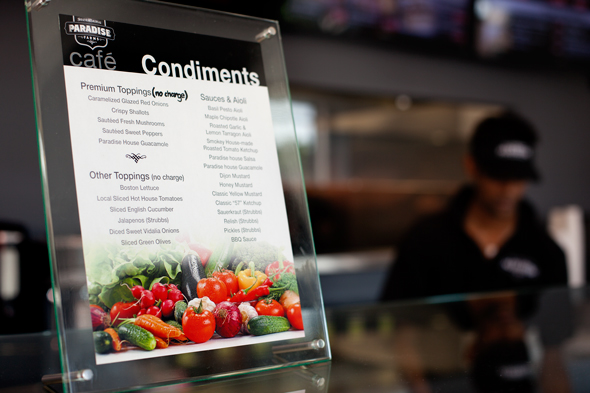 Its cafeteria-style interior is eerily reminiscent of a futuristic Harvey's, as is the fact that you place your order with a cashier and wait until your name is called. The glowing menus hung above the counter offer a somewhat schizophrenic selection of of patisserie type offerings--such as croissants, loose leaf teas and ice cream--which compete with brisket sandwiches, kobe beef burgers and steak sandwiches.

Cold drinks are self-serve, and packaged in glass bottles that definitely inflate the price ($2.25 for a Coke), but as we know, glass is the ultimate vehicle for pop--it just tastes better. 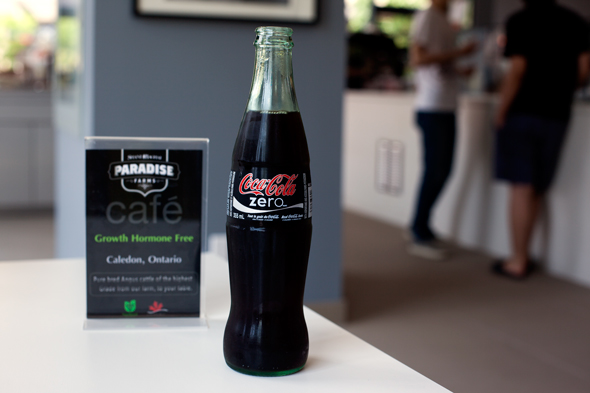 We shared a BLT ($4.95) a gourmet version of the classic with peppered, maple-smoked bacon, sliced beefsteak tomatoes and a basil aioli on a ciabatta-style bun. The bacon was salty and sweet, and a perfect complement to the basil and juicy tomatoes. Traditional BLTs are pretty vanilla; they're always a safe choice, as they are Paradise Farms, but the noticeable alterations elevate it somewhat. 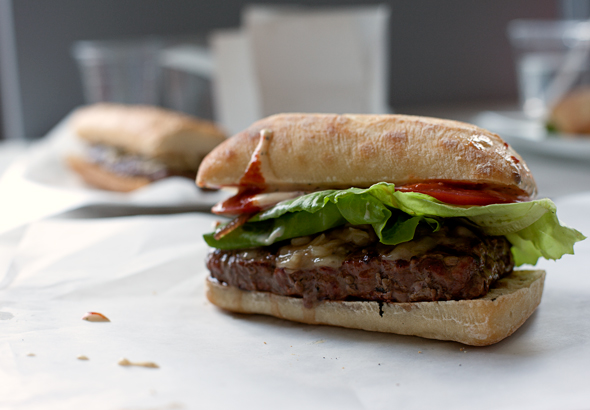 With the 6oz Angus Burger ($6.95) being sold out (even though it was only noon) I was forced to upgrade to the massive 9oz burger ($8.95) topped with aged white cheddar ($1.50). While it took almost 10 minutes for them to beckon me to the counter to top it up, it was worth the wait. Served in a rectangular shape, this was one hot mess of a sandwich.

In all fairness, I did up the mess quotient of my own volition by garnishing it with chipotle mayo, homemade ketchup, tomatoes, lettuce and caramelized onions. Food allergy sufferers take note; the spoon for the mayo was reused when it came to ketchup. With no egg allergy to speak of, I happily carted my giant silver platter over to my table and, armed with about 50 napkins, went to town. Just because it's hormone-free doesn't make this a healthy option. With minimal nutritional value and a steady geyser of grease erupting from the patty, it doesn't take a doctor to confirm that this isn't exactly diet food. 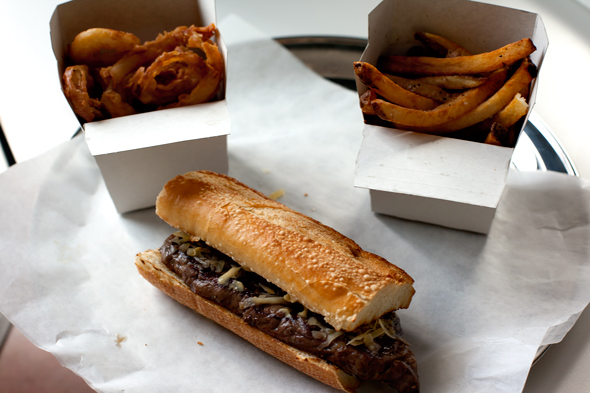 The Veal Steak Sandwich ($12.95), served on a length of crunchy French bread was cooked to a lovely medium, although I would prefer the gristle cut off; plastic knives aren't cut out (pun intended) for that sort of sawing. Enhanced by a tangy Gouda cheese ($1.50) and a slathering of Dijon mustard, the tender and juicy steak was well paired with its side of buttermilk battered Onion Rings ($3.50) and fresh cut French fries ($2.95).

The fries were fairly standard, and had they arrived a minute or two early they may have still been crispy, but the onion rings were some of the best I've ever had. The thinly-sliced, sweet Vidalia onions battered in buttermilk were absolutely spot on. 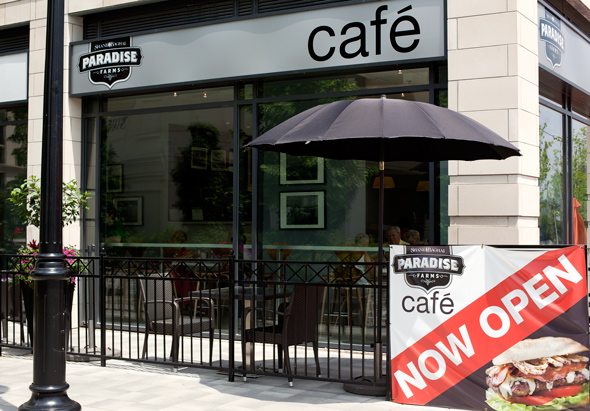 The interior only seats a maximum of about 20, but the corner patio with coloured umbrellas looks like a promising alternative when temperatures aren't soaring to record-breaking heights. Free parking is accommodated around the back of the condo, and there is no liquor license, so save the beer budget for another time.

With future plans to roll out more of these cafĂŠs, and dozens of buildings in the GTA with Shane Baghai's name on them, odds are good that you'll soon be tempted by Paradise Farms Cafe's convenient locations as well as their flavourful beef.