Panino & Co. opened recently (and quietly) in the space that previously housed Barista Espresso Bar in Liberty Village . While there were rumblings of it being an entirely new operation, I'm surprised to find Michael Rutigliano of Maialino Enoteca (and Barista) at the helm. 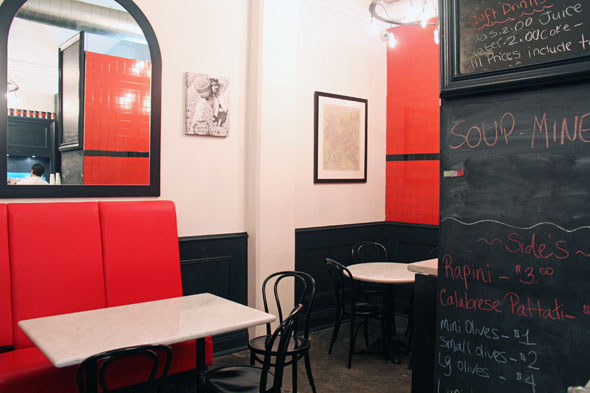 Rutigliano, who fell into the restaurant business by way of hairdressing, familial promises, and a certain aptitude for the service industry, was finding that as corporate chains moved into the neighbourhood, they drew coffee-minded customers away; also, the sandwiches they served on house-made focaccia in the space's previous incarnation weren't quite drawing the crowds that they once had. 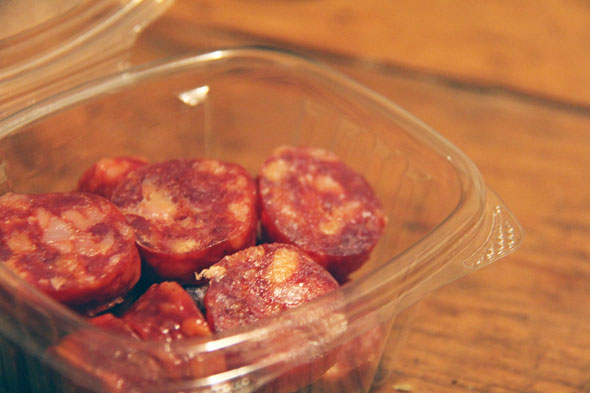 It wasn't until he went back to the basics of Italian 'fast food'--veal, steak and veggie sandwiches served on big, soft buns--that the lunch-time line-ups began to swell, and the space was thus reborn as Panino & Co. Now, the former Barista space has been outfitted with a flat-screen, red accents (including the tall-backed, red leather seating to one side), a closed-off kitchen, and a handwritten blackboard menu. 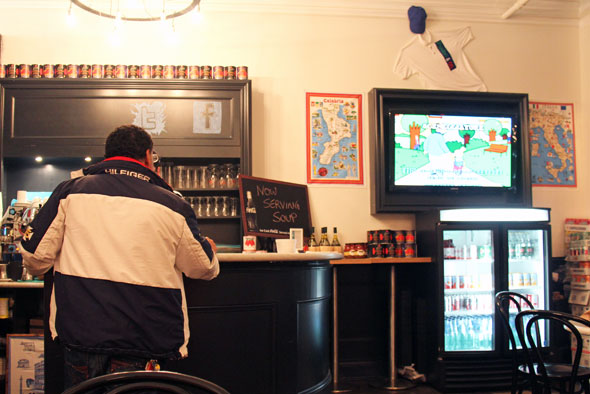 The operation is, on the surface of things, simple. The restaurant's 6 sandwich offerings are all $7.35, and with the exception of the vegetable, come with more or less the same toppings. There are some small antipasto offerings--olives, lupini ($2), or calabrese pattati ($3)--so you can easily assemble a convincing Italian picnic. The shop's curved-back black chairs, white-topped tables, and home-cooked smells invite eat-in customers, but the lunch-time rush is more of the grab 'n' go variety. Their hours are also somewhat relaxed, or "European," as Rutigliano says. It's best to call ahead as they sometimes sell out by 3 or 4 p.m. 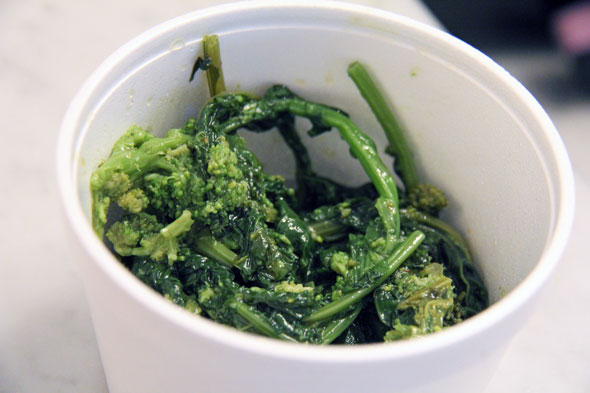 I'll admit it: I'm no fan of that long, grim corridor of storefronts at East Liberty, but what I'm first struck by upon entering Panino and Co. is the smell--fresh vegetables and meats simmering somewhere in the back of what's fundamentally a small space. The rapini ($3) comes simply prepared with a touch of oil (and I detect a bit of garlic). It's cooked perfectly to retain the firmness of the stalk, while also coaxing out the vegetables delicate flavors. On a menu that lacks a salad, I would've liked the inclusion of some other vegetable in the bowl, or maybe a touch of acidity. 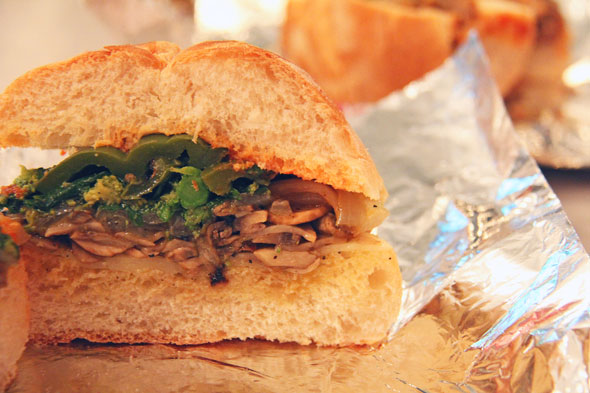 I choose the vegetarian sandwich--strange, I know--and am rewarded with a plush, dusted bun near to overflowing with vegetables. The green peppers are cooked but still crispy, the mushrooms and onions are freshly sauteed and spiced, and the same rapini from the salad fares better as part of the veritable garden on a bun.

The steak sandwich doesn't disappoint. The steak is perfectly cooked--it's moist and thinly sliced enough to bite through, and there's nary a sight of either pink or char on the meat. The sandwich comes with sauteed onions and green peppers, and I also opt for mushrooms ($0.50). I'm asked what level of spice I'd like on the red pepper sauce which comes generously spread on the bun--"medium" is nicely balanced, and adds some heat and flavour, without overpowering the sandwich. This might be sacrilegious to lovers of a straight-up steak sandwich, but I would've loved to see more spice on the meat itself. 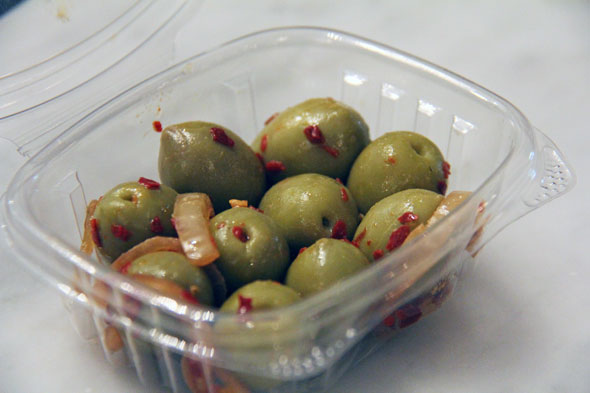 I've never said no to olives ($2), particularly when they're plump, green, and displayed in tantalizing see-through containers by the register. The olives themselves are not as flavourful as I would've liked, but they're helped considerably by the preparation of oil, chili flakes, and onions.

I also can't resist a small container of sliced, piquant Italian sausage ($2.50), which is firmer in texture than I'd like, but is dry-cured in-house--and you can taste that attention to detail. 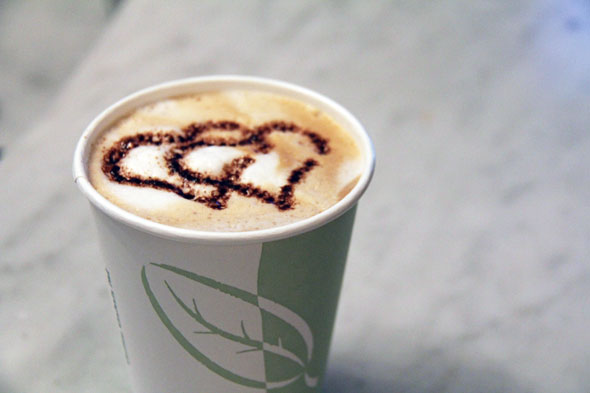 Coffee is in Rutigliano's genes--his family has been in the espresso bar business since the '50s--so I opt for a cappuccino ($2.75) to go. The shot is a bit subsumed in the milk and foam, but comes topped with the same chocolate 'art' that Barista was known for. "The machine does it," Rutigliano says, smiling, when he sees my eyes light up, but machine or no, I remain impressed by the intricate lines and light cocoa flavour throughout the drink. Soft drinks such as sodas and juice are also available for $2. 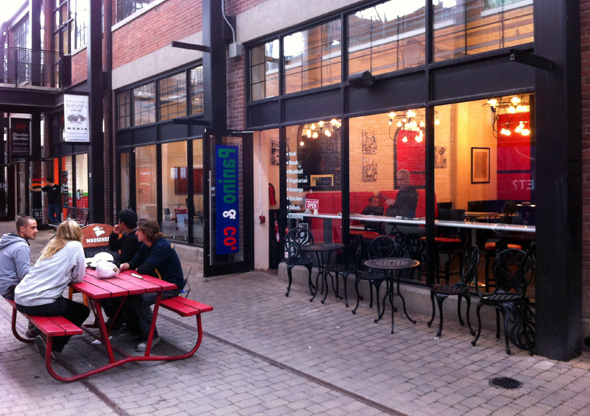