Omai is currently open but their offerings and services may be affected due to the pandemic. Please contact the business directly for more information about any changes. Is this your business? Please contact us if you would like to update this message.

Omai is a Japanese restaurant serving temaki hand rolls and sake along with tapas inspired by other Asian regions.

“Omai” roughly translates to “mom” in a North Korean dialect, which Edward Bang, who co-owns the restaurant along with Jason Ching, spoke in his household growing up.

The neon Chinese character on the wall also means “mom,” and like the cuisine here is recognized in Chinese, Korean and Japanese cultures. 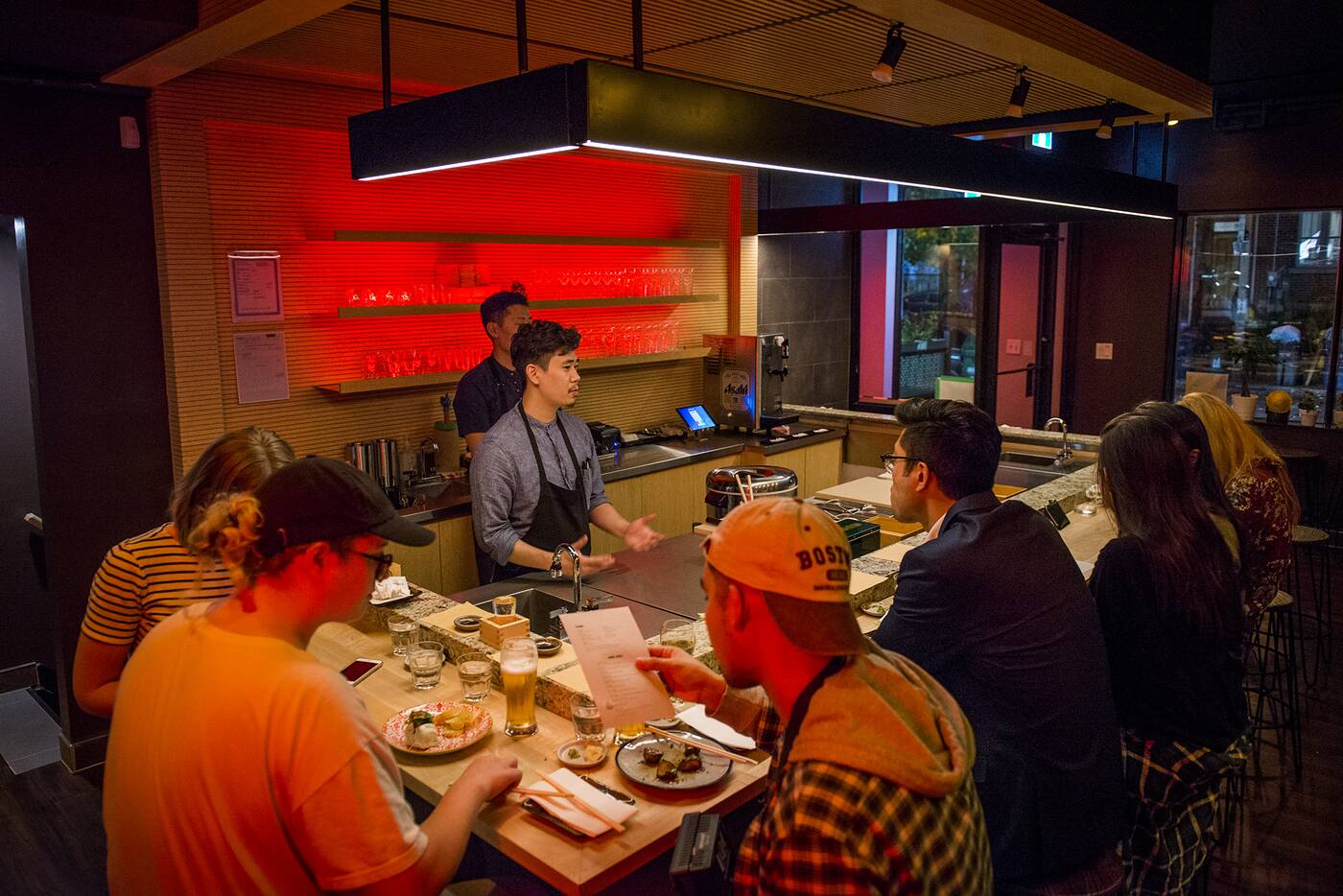 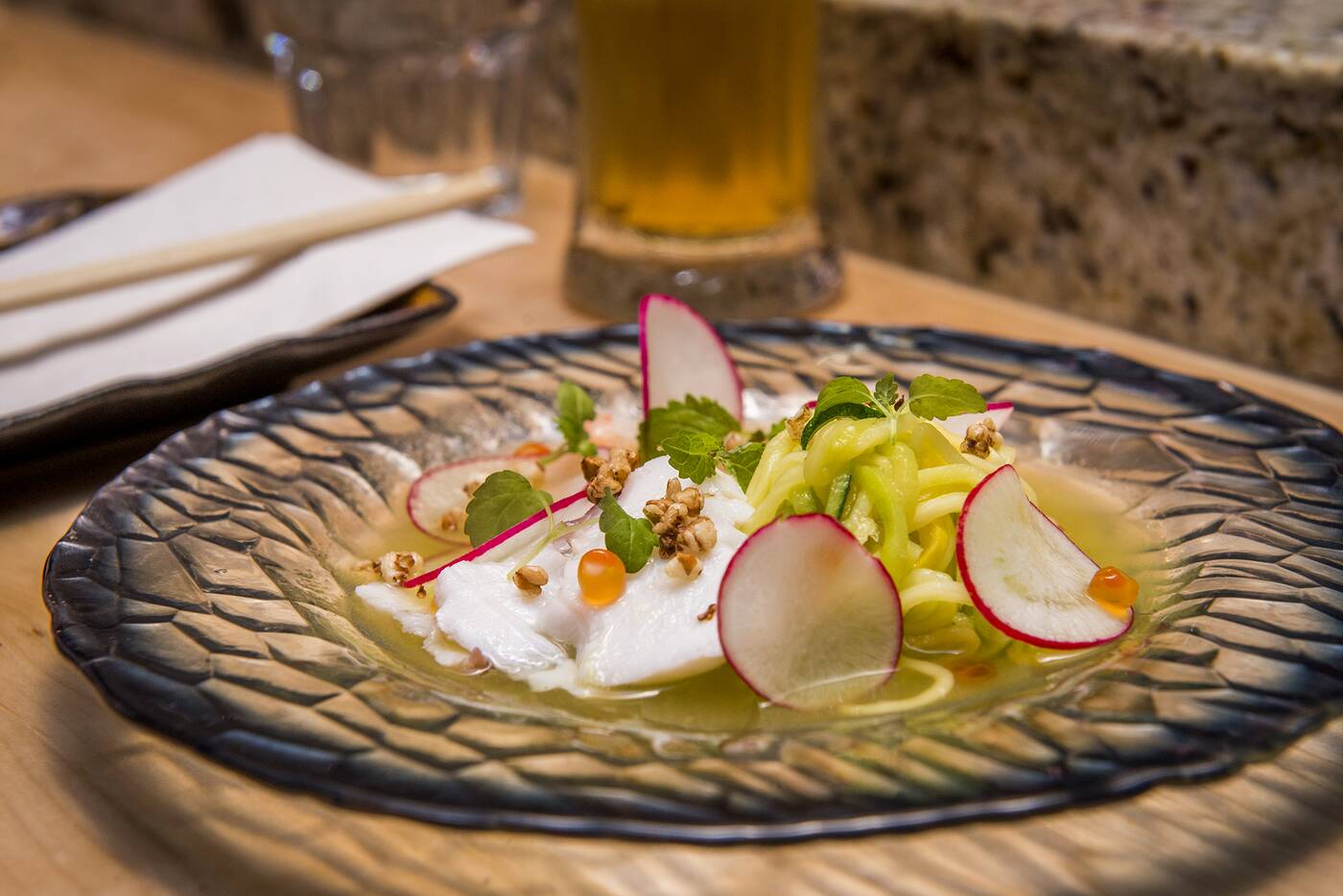 Sunomono ($8) starts with a light little mound of zucchini “buckwheat noodles.” This is topped off with incredibly delicate octopus and wild shrimp. It’s then finished off with popping orange ikura (roe, otherwise known as fish eggs) and wafer-thin radish slices. 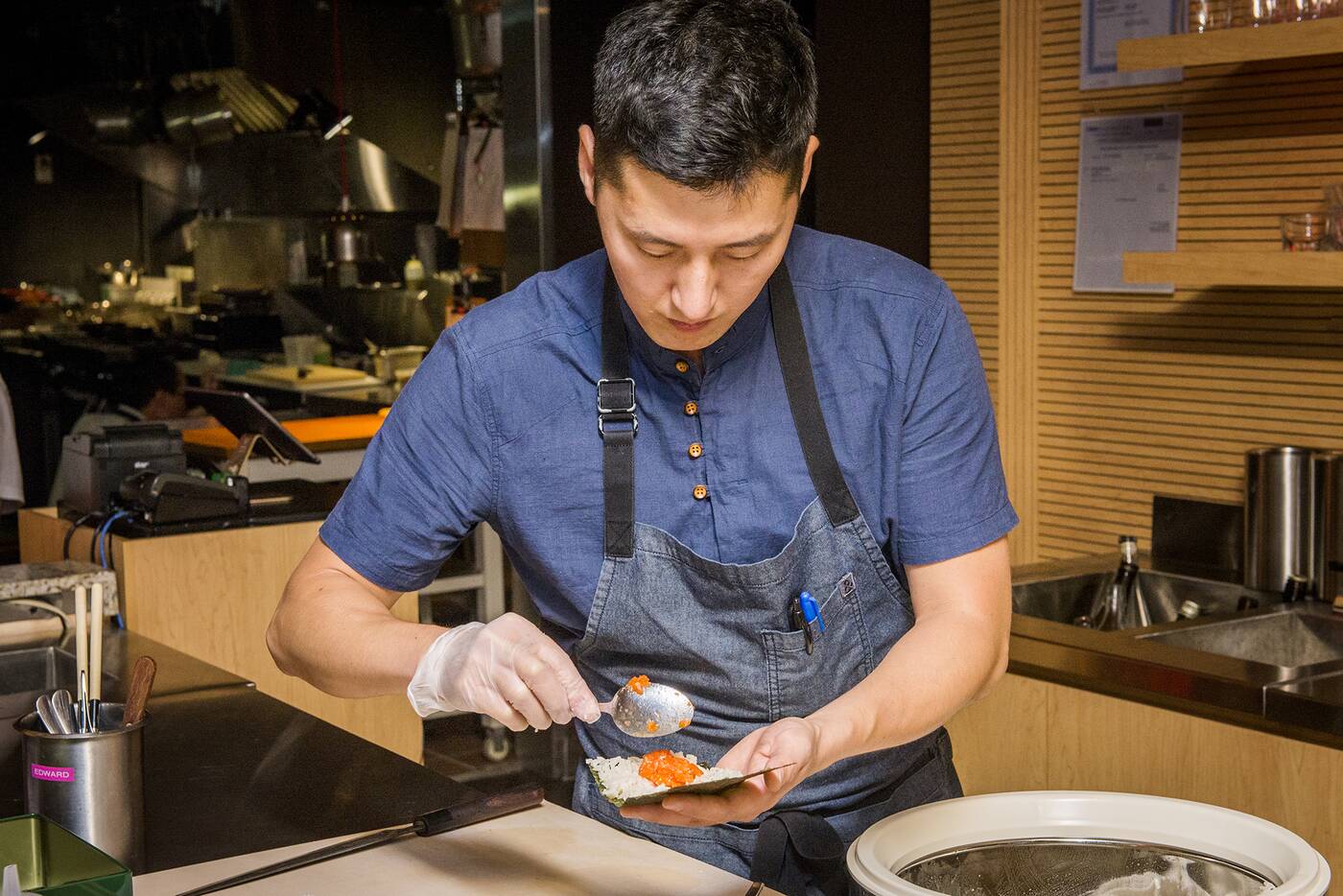 Temaki are simple made-to-order hand rolls, intended to go down the hatch as quickly as possible one at a time, following the protocol of high-end sushi joint. In the same fashion, temaki are pre-seasoned, though you are presented with optional soy sauce. 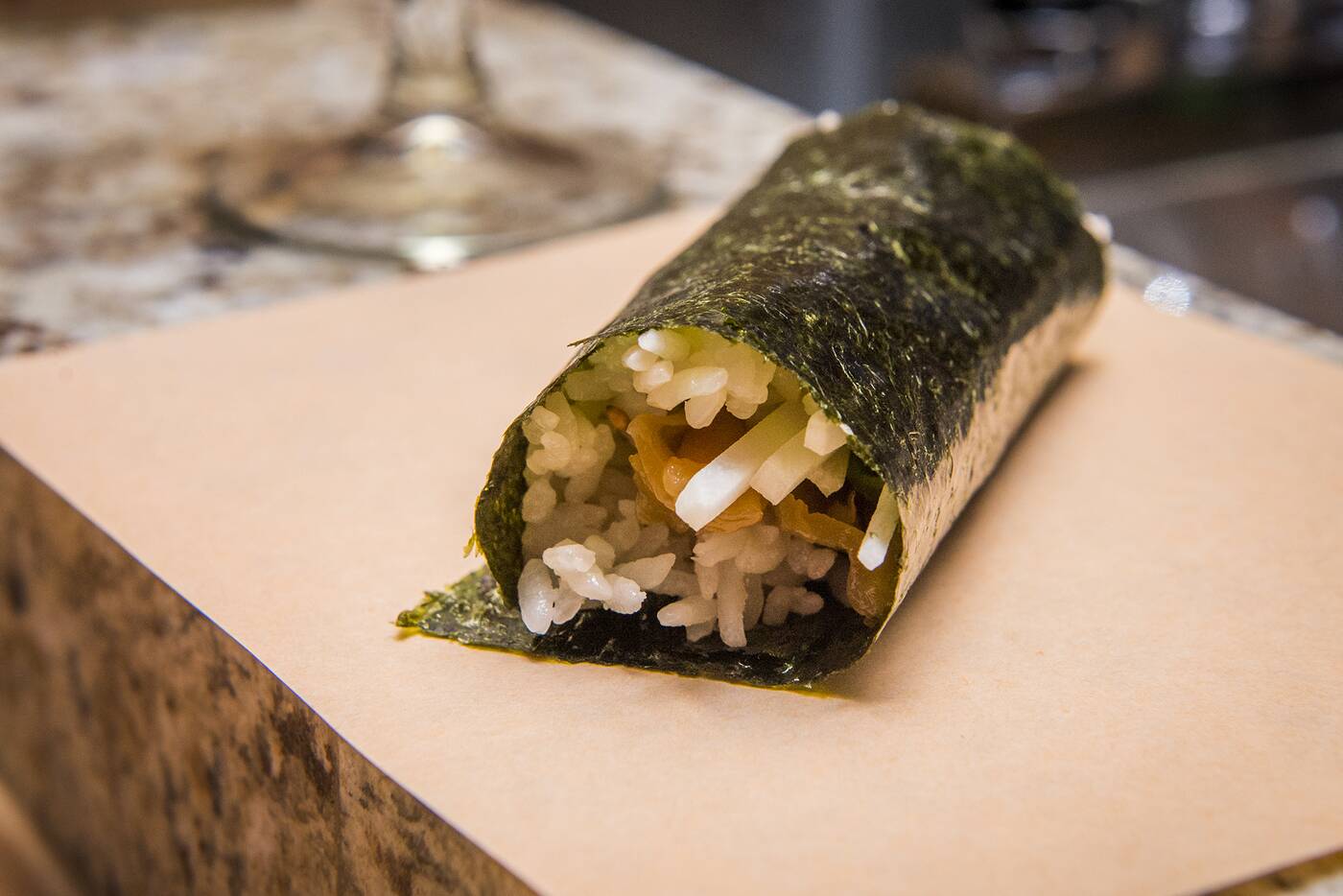 Gyanpo ($4) is actually a vegan temaki filling, a shaved dried squash common as a Japanese ingredient. It actually tastes remarkably rich and almost fishy, complemented by daikon, avocado and sesame. 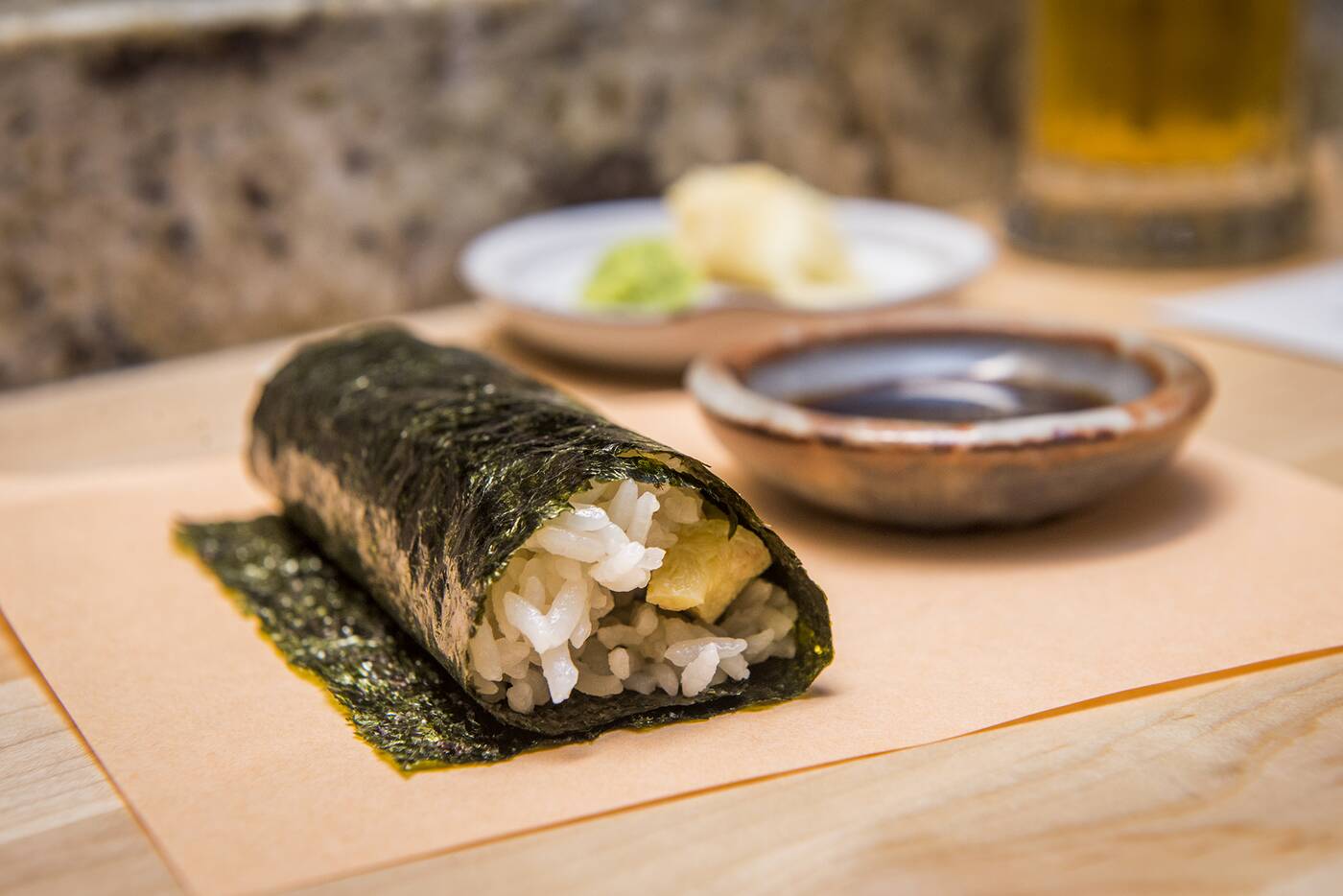 Tamago ($5) doesn’t contain fish either, but the sweet egg is set off by a luxurious hit of truffle. 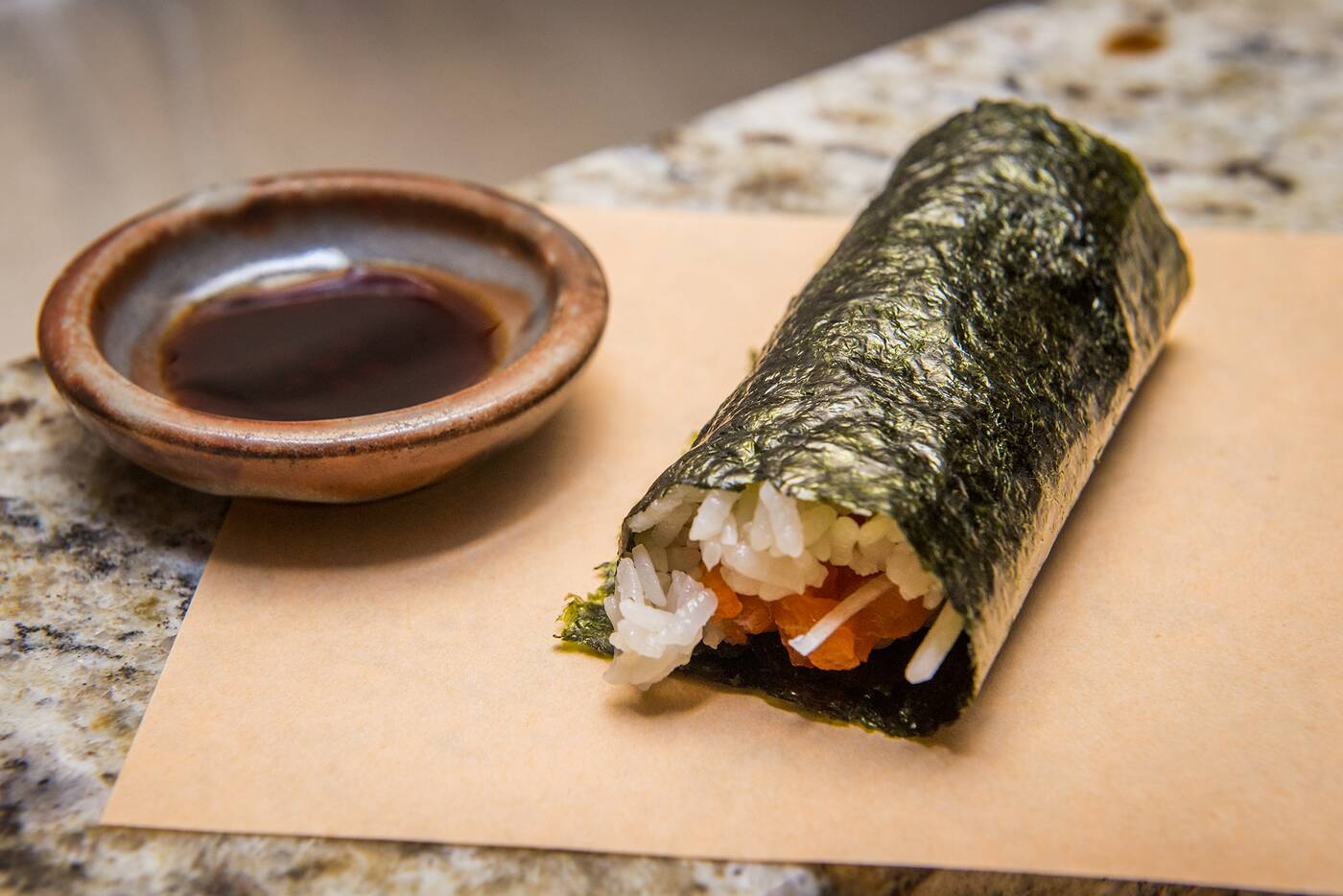 Salmon temaki ($6) is interestingly balanced out with the addition of maple, the sweetness of the fish and syrup harmonizing. 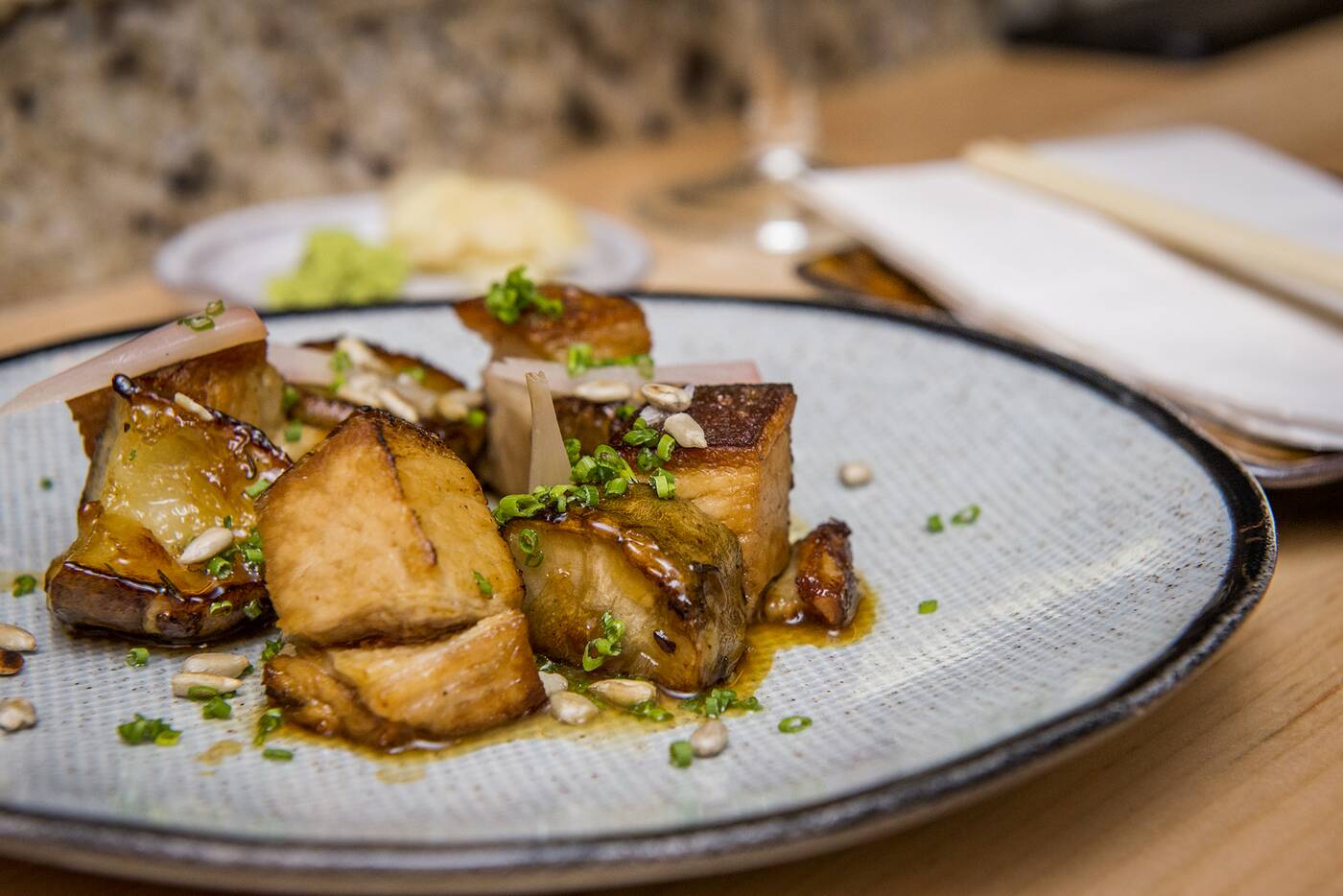 Pork belly ($12) could be seen as a heavier dish placed nearer to the bottom of the menu. The pork is crispy and fatty, paired lovingly with tender sunchoke chunks of a similar size as the belly, acidic pickled ramps, crunchy sunflower seeds, and a lip-licking sherry pork jus that ties everything together. 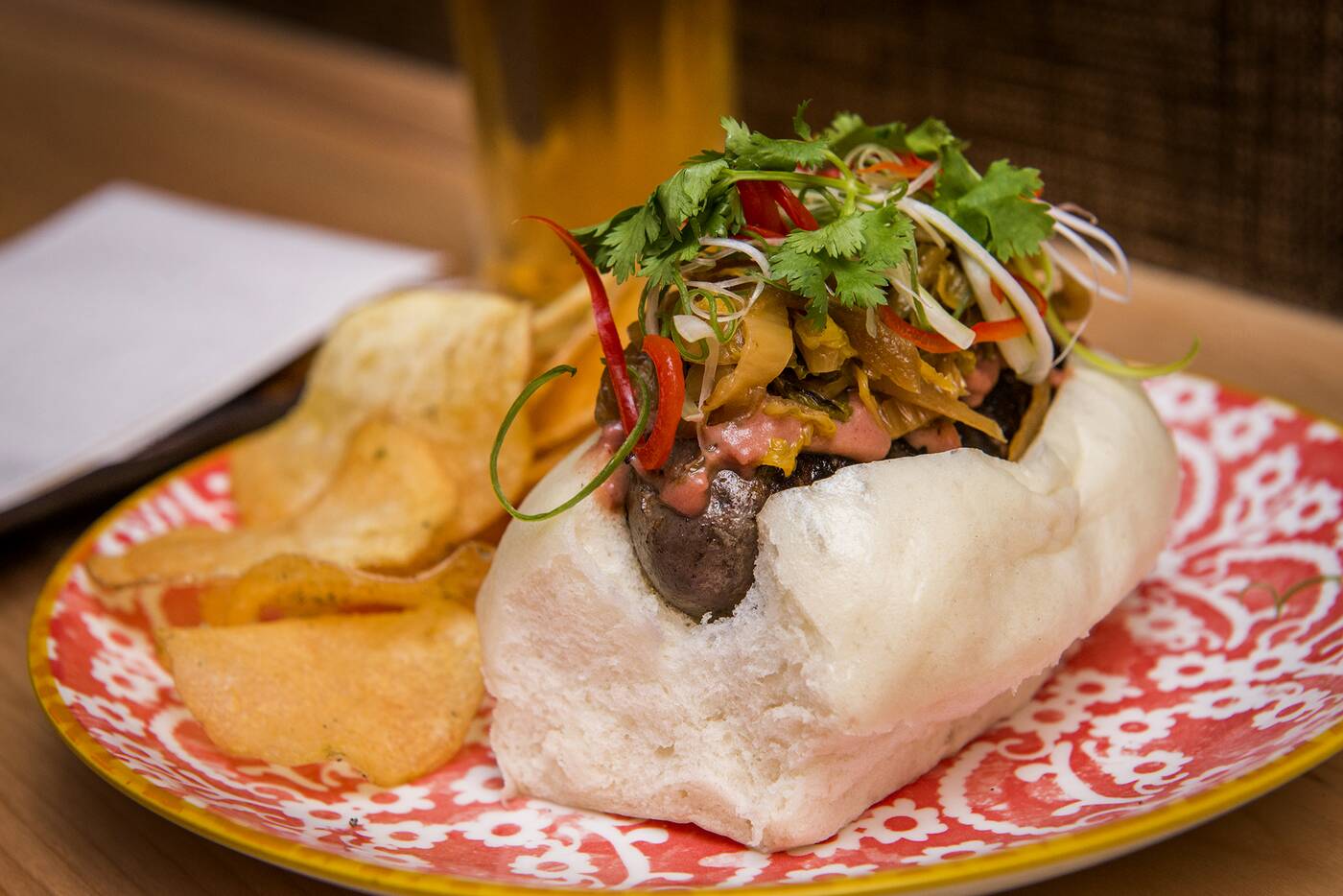 The soon dog ($11) and its fluffy steamed bun are both made in house, a play on a traditional Korean blood sausage. It’s paired with some plum mustard and addictive sage chips, curled scallions and herbs adding some brightness and height. 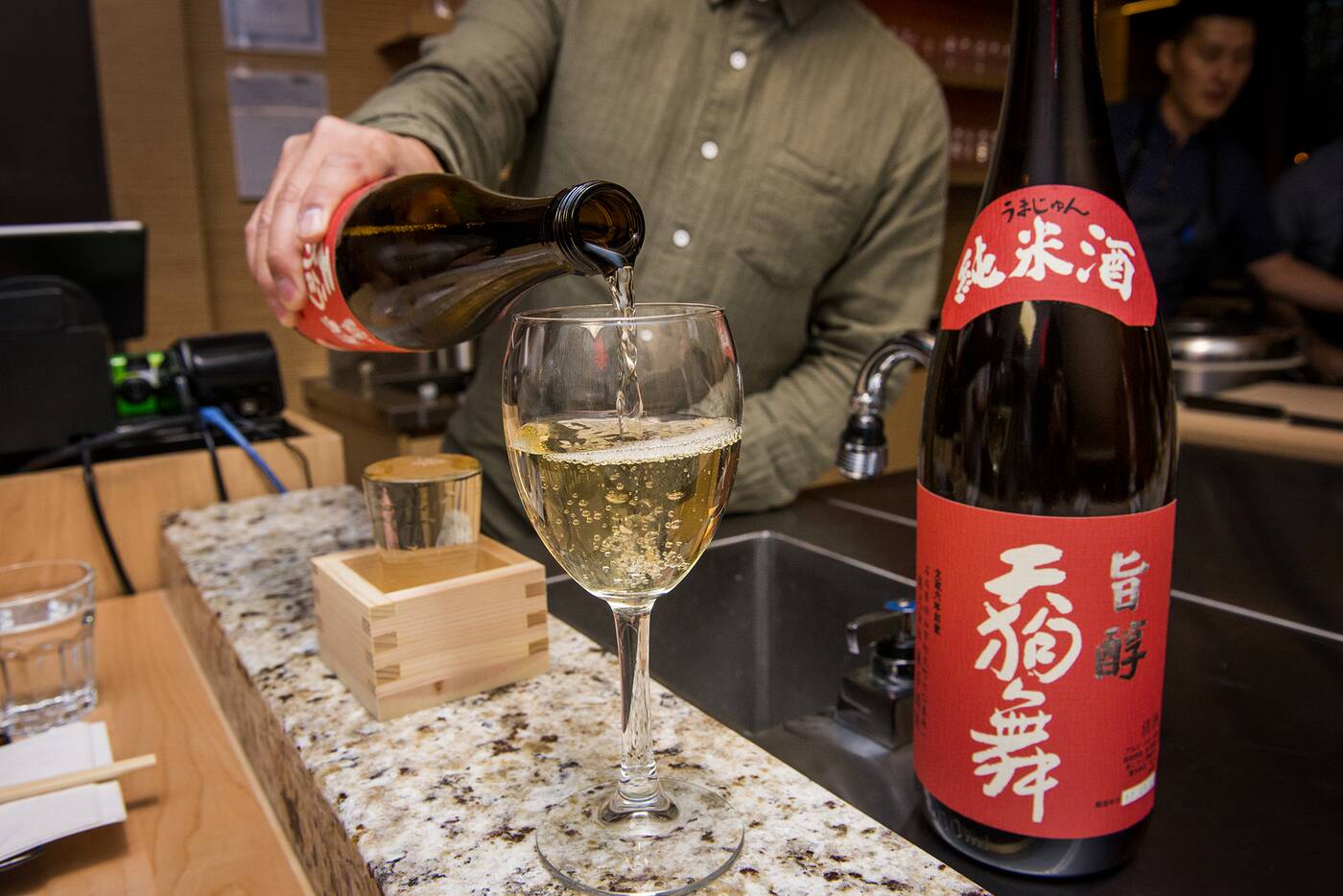 Junmai Umajun ($11) is poured from giant bottles, selected off a short but detailed sake list. At 15%, it’s one of the more full-bodied sakes on the list, served in a wine glass and to be enjoyed in a similar style as wine, the aroma and look highlighted. 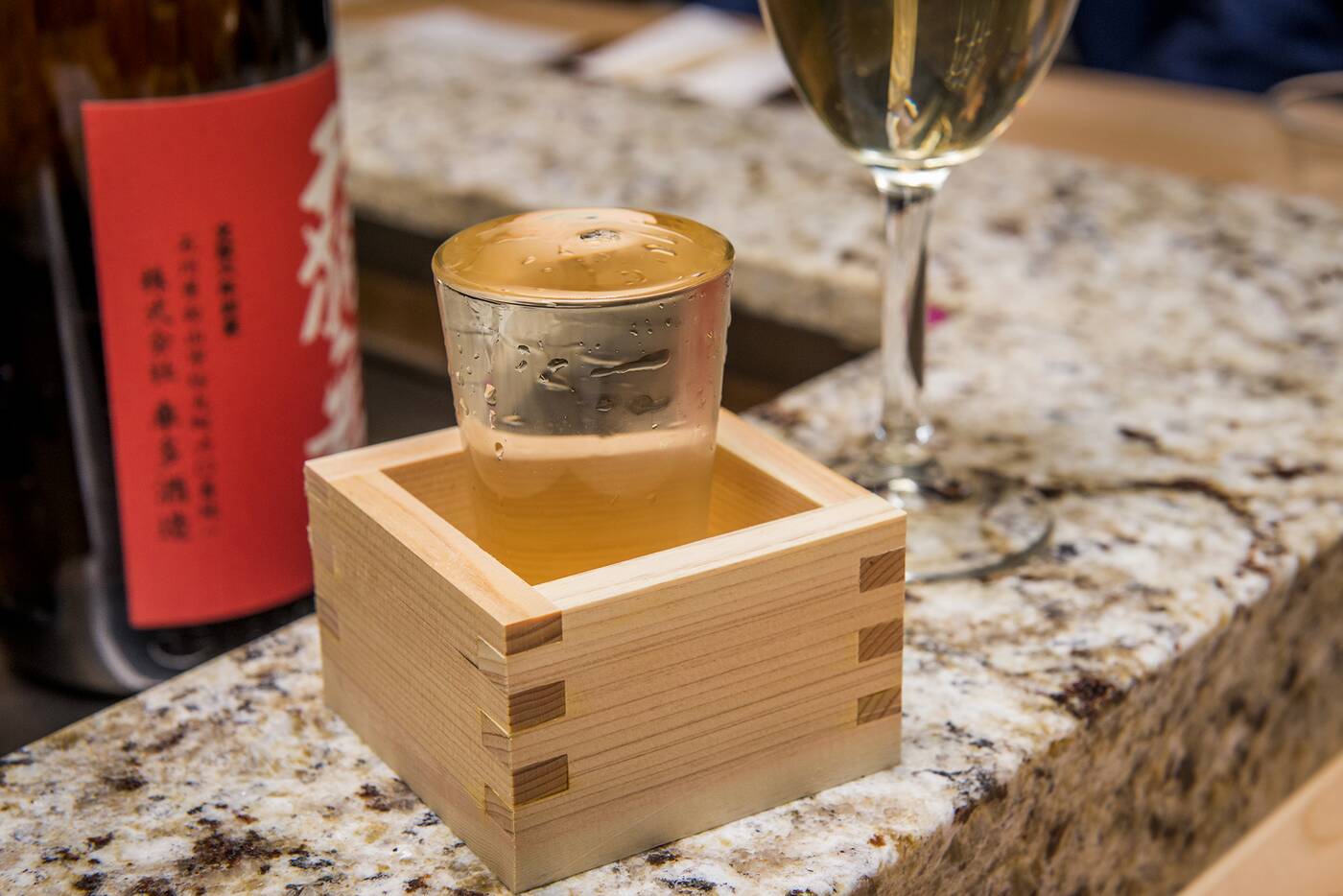 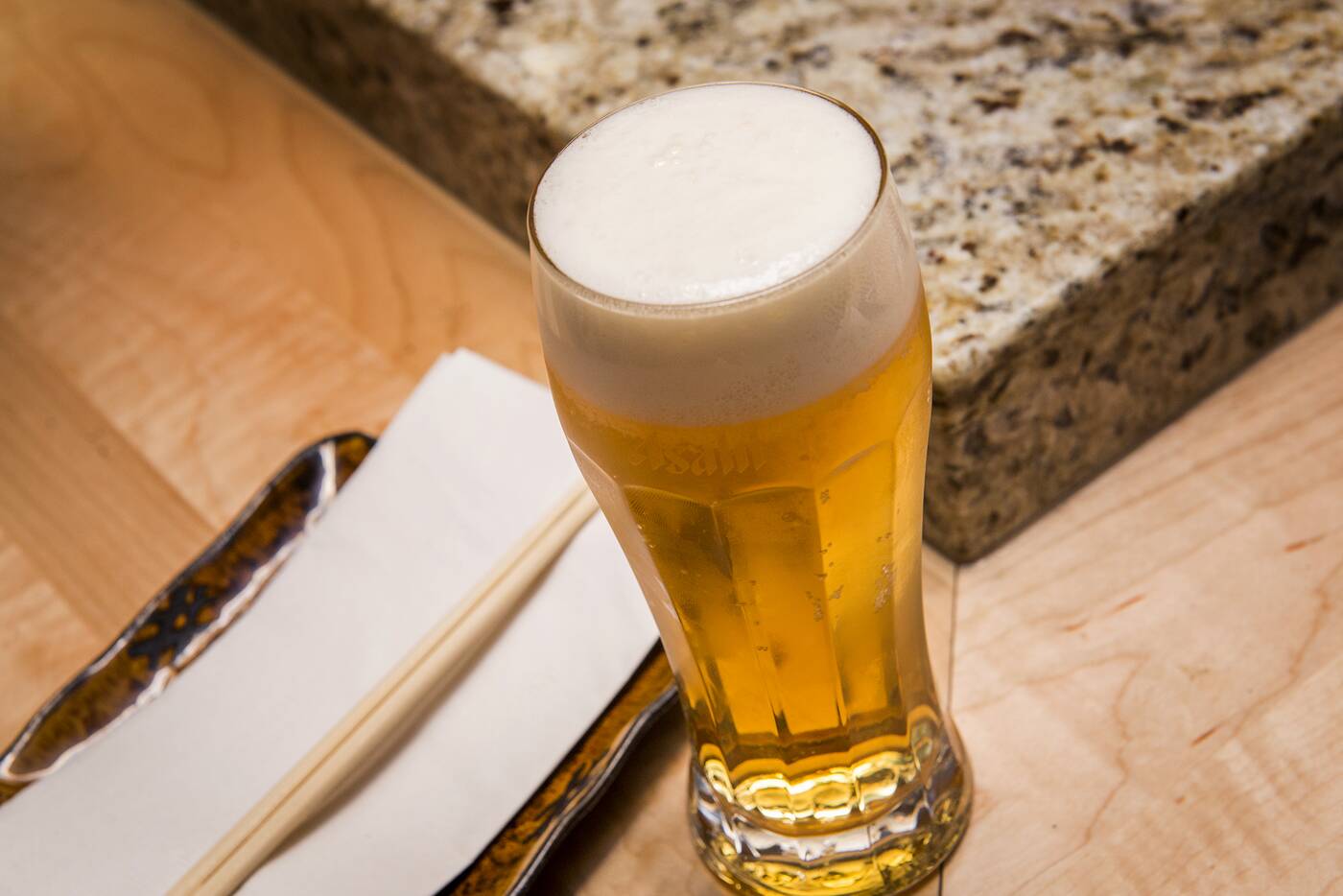 Your only other option is a very limited selection of beers, Asahi Super Dry ($7) being one of them. Happily, they kept the other draft local, Left Field’s Maris Pale Ale ($6). 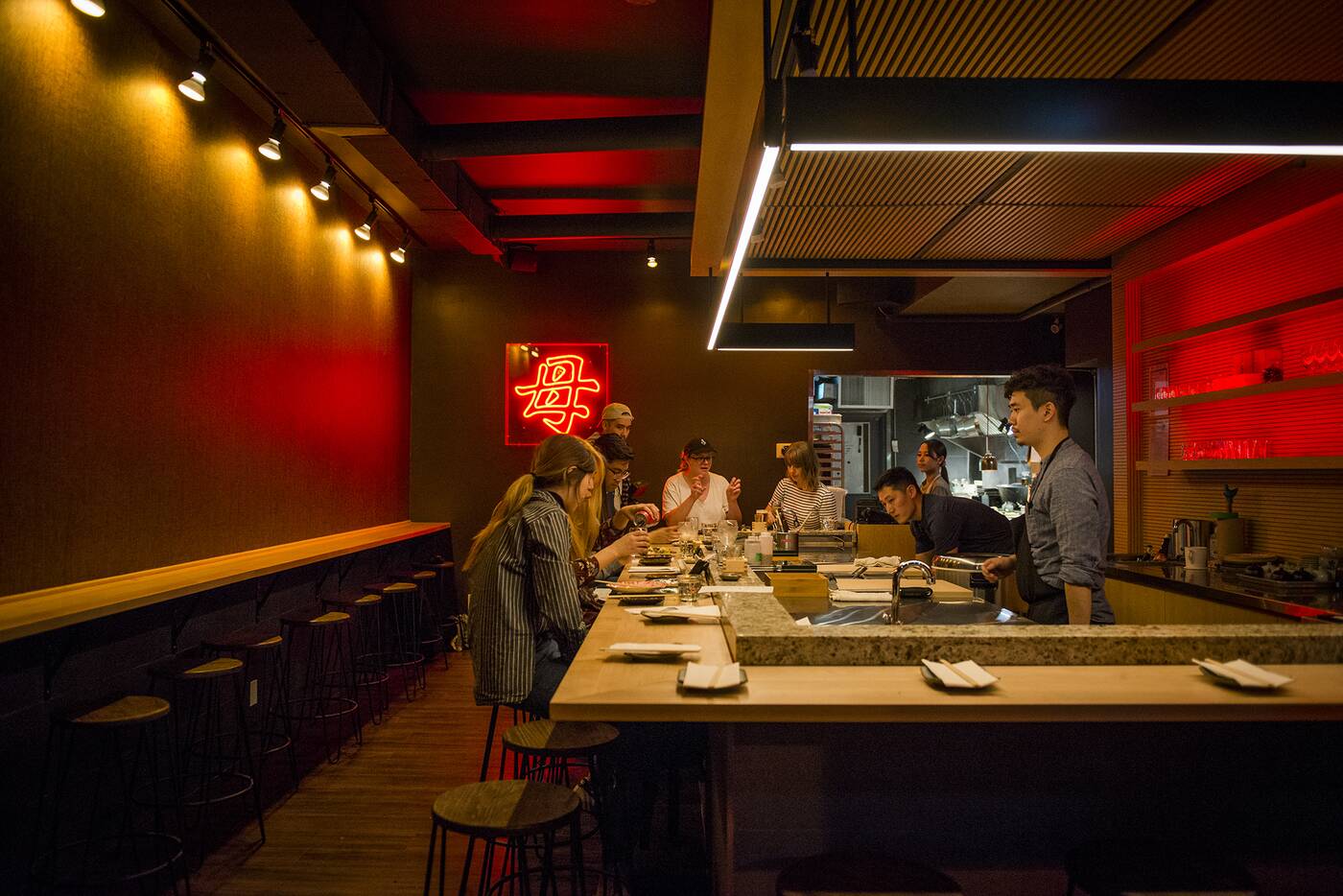 With stints at Patria and Canoe in Bang’s past, the impeccable presentation here should come as no surprise, but an eye for detail stands out at this spot that’s housed several nondescript sushi places. 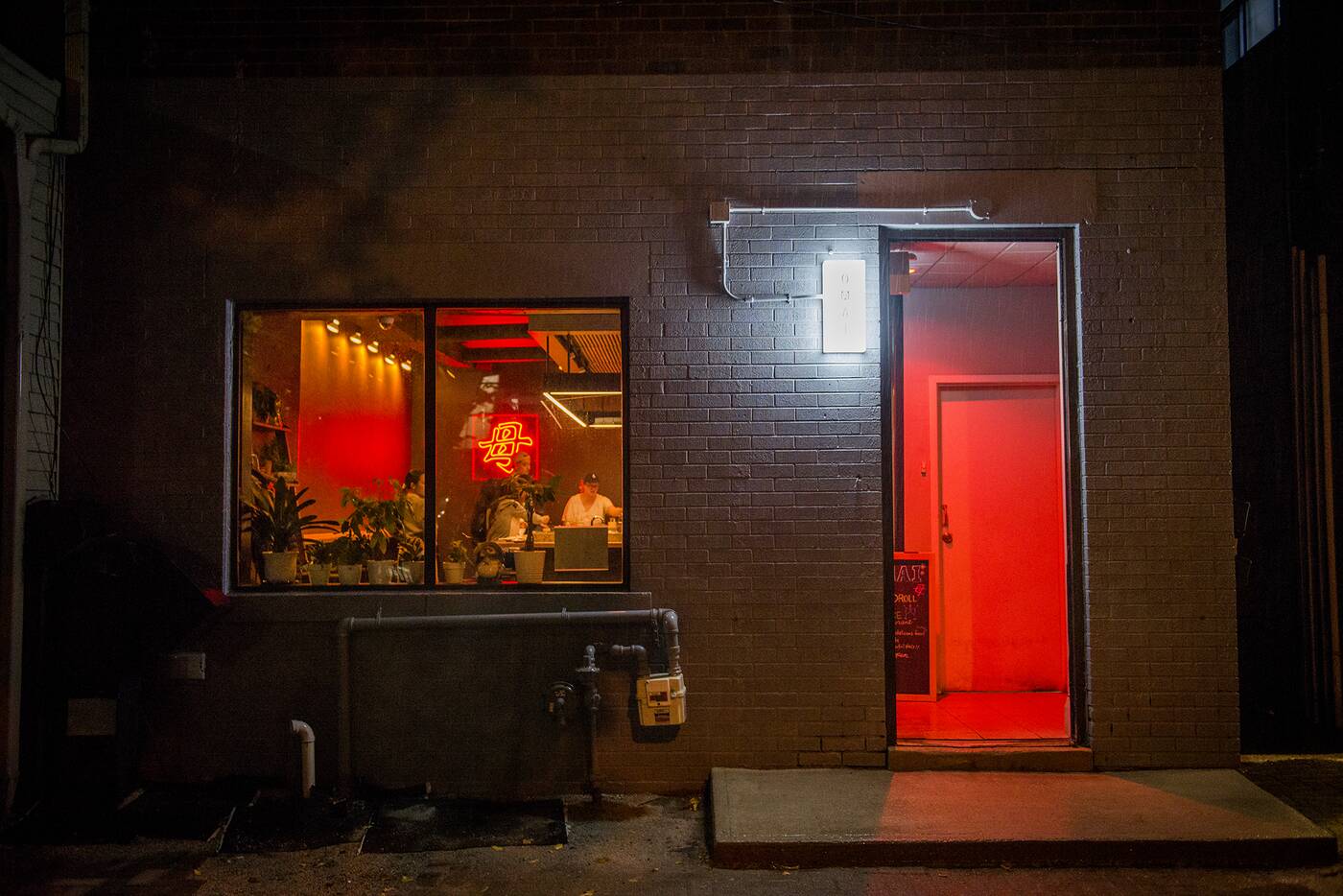