Simple, sure, but it has worked for the fish and chip joint for 25 years.

The staple of Laird Drive is owned by a family with a longtime hankering to provide people with traditional British fish and chips. It all began back in 1955 with a grandfather's fish ‘n chip shop in Yorke, England. 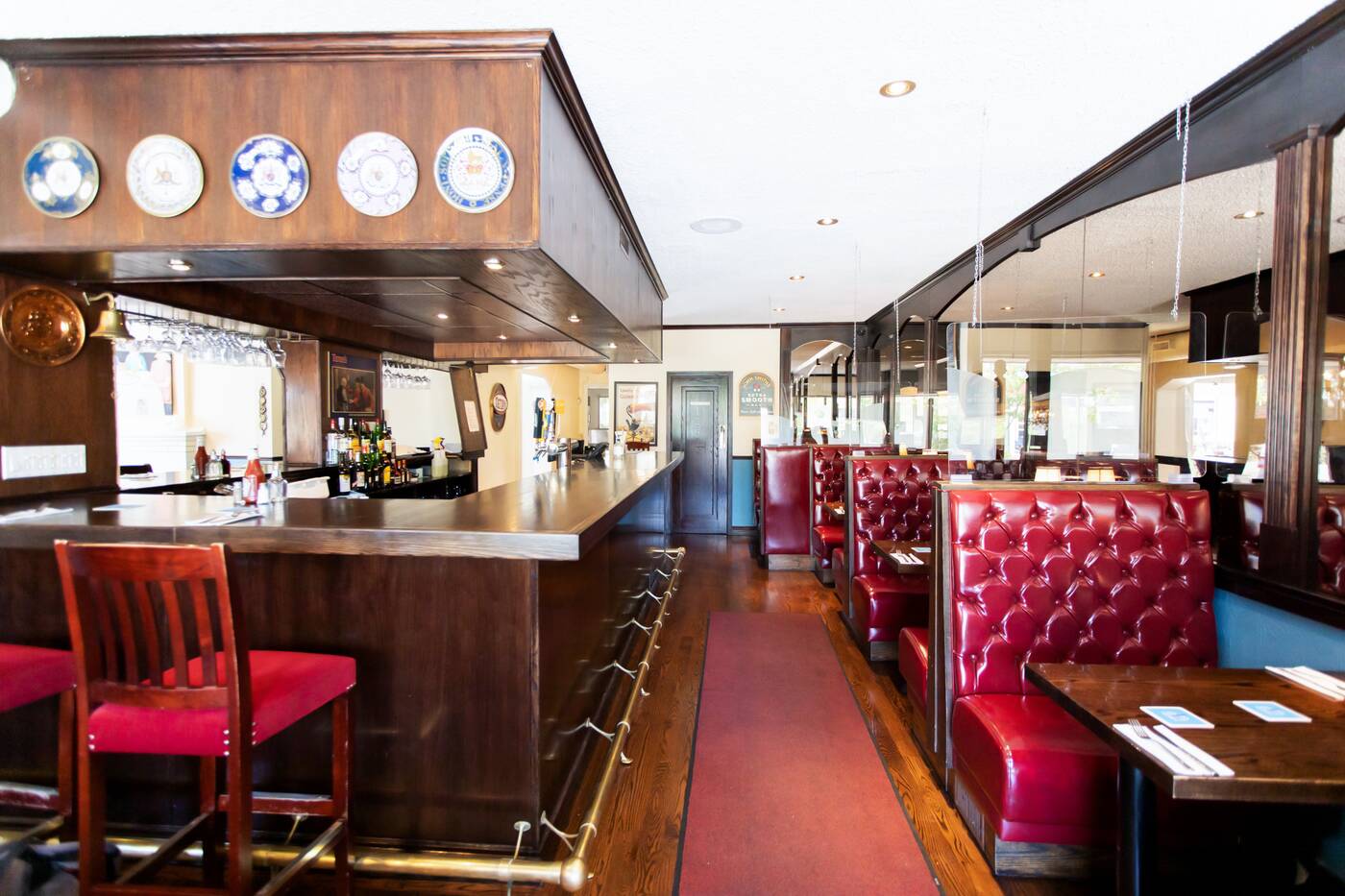 Peter Feather bought the business his father started with his wife, Anne, in 1969 when they were in their twenties. After running it for a few years, the couple moved to Canada and opened the Britannia in Trenton in the 1980s before opening up shop here in 1997. 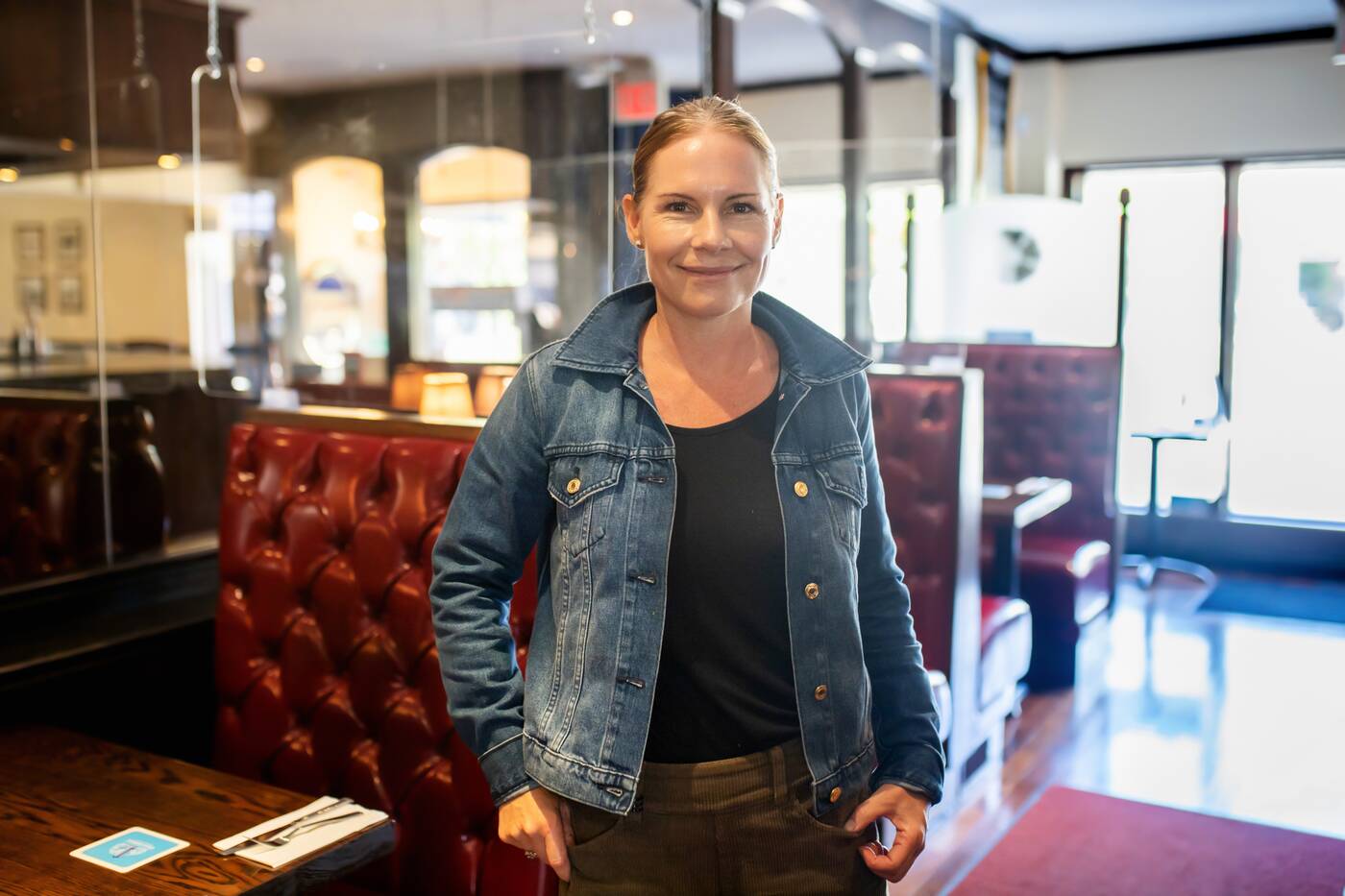 The restaurant is something of a birthright for daughter Olivia, who now runs daily operations with her twin sister Rachel after both working in the business for 20 years.

Their brother Paul went on to open his own shop, Fish and Sips in Collingwood – further proof that fish and chips run in the family. 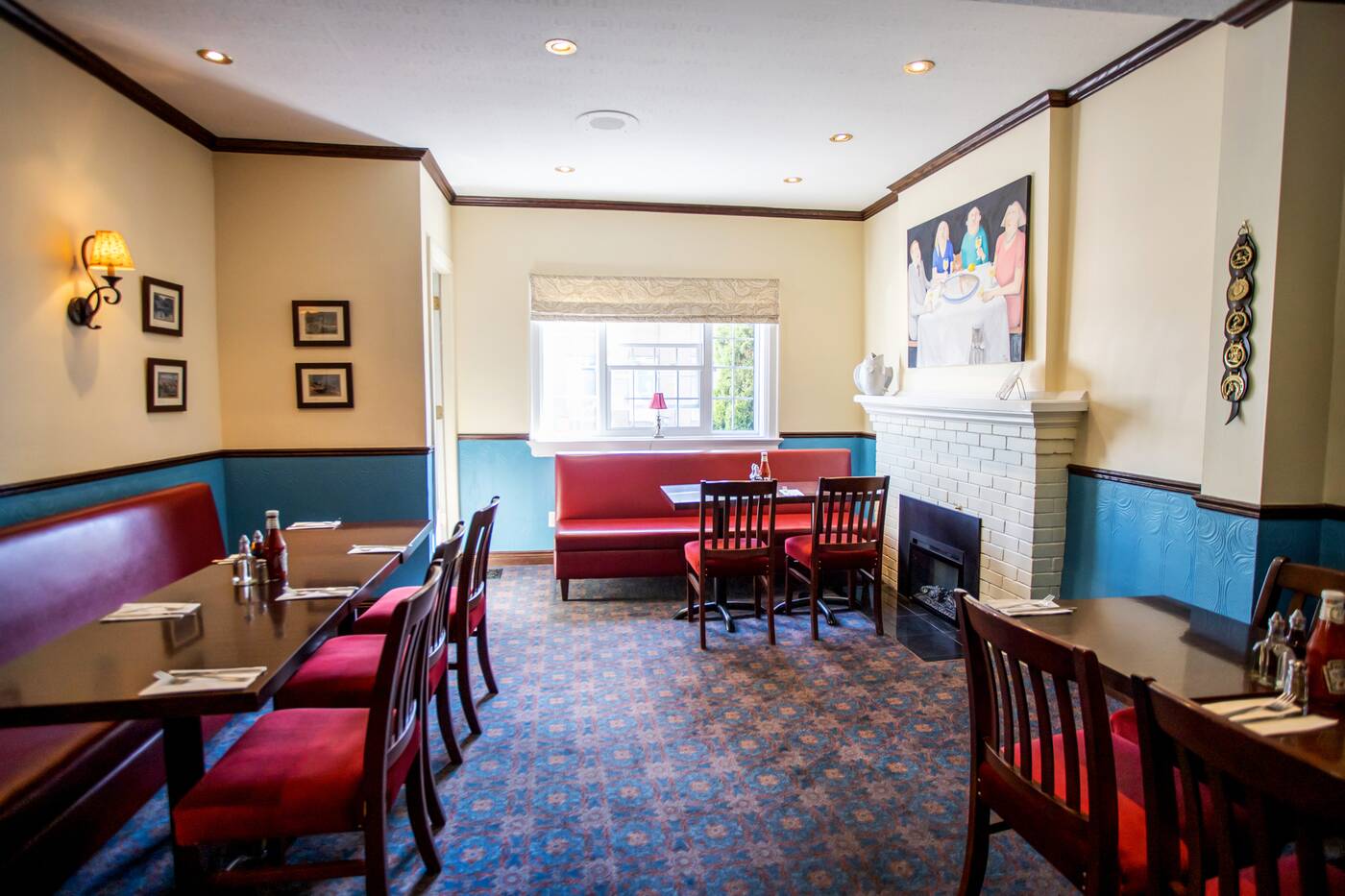 The dining room hasn't changed much, besides maybe a few slight renovations here and there since the opening day, which also happened to be the twin's 21st birthday. With vintage carpeting and red vinyl booths, it's your average British pub. 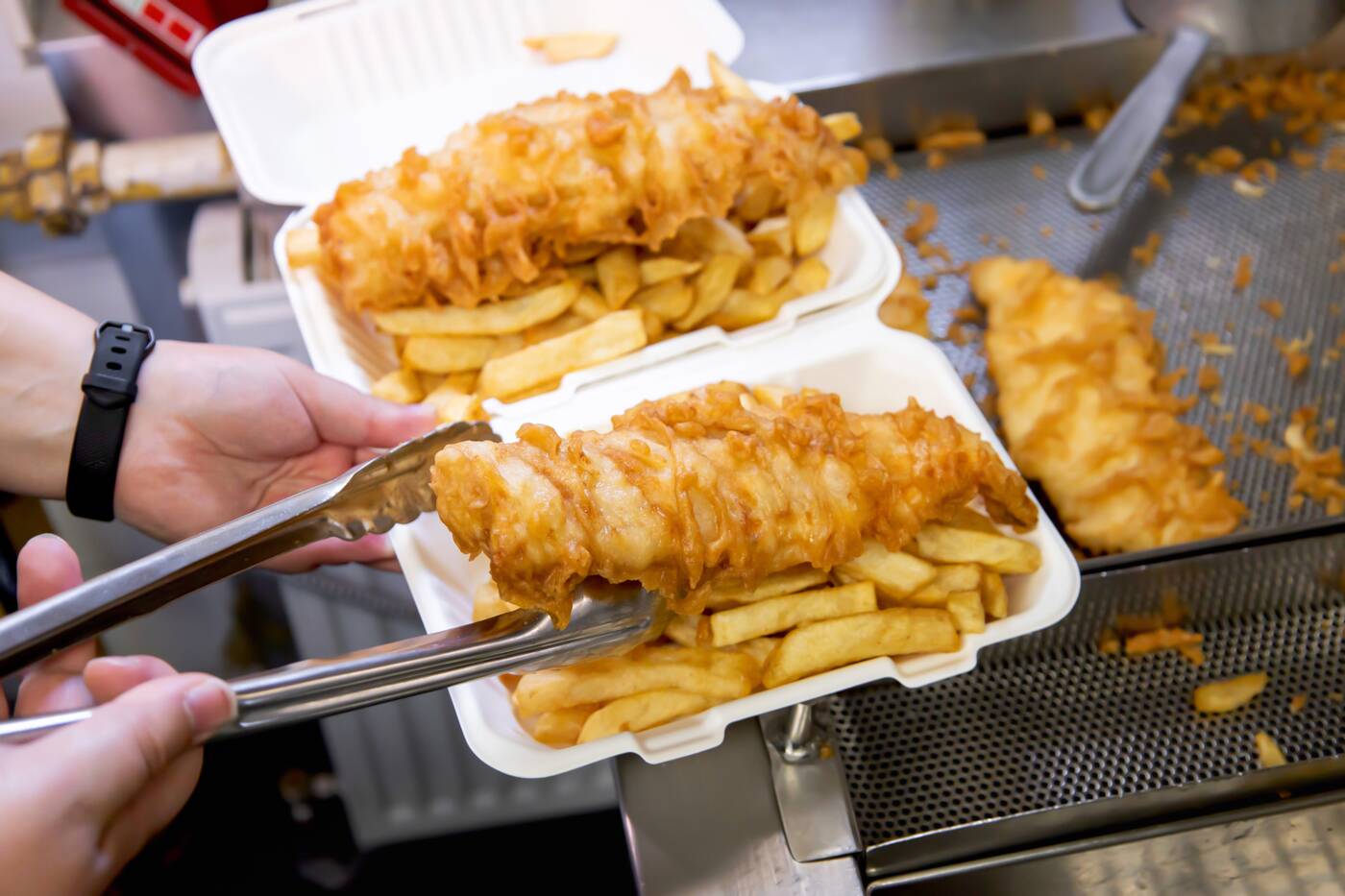 Just as unpretentious as the atmosphere, the menu mostly consists of fried fish. The cod (Olivia's personal favourite) comes directly from a fishery on the East Coast while the haddock is Norwegian and the halibut, Alaskan. Each comes battered in the Feather family recipe. 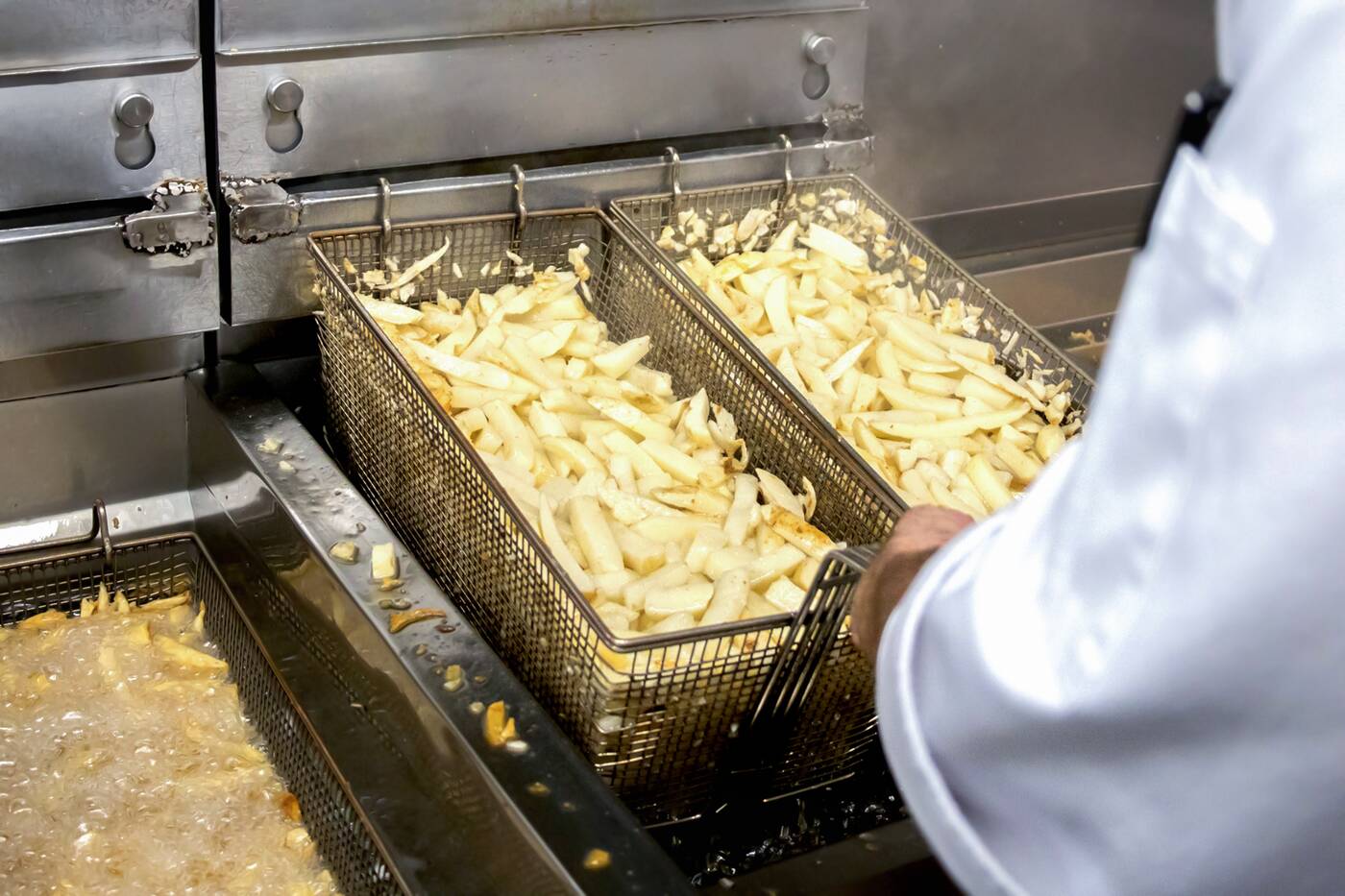 The chips that come on the side are hand cut (I'm told they typically go through about six to seven bags of potatoes a day) and left plain free of any seasoning, similar to the fish. 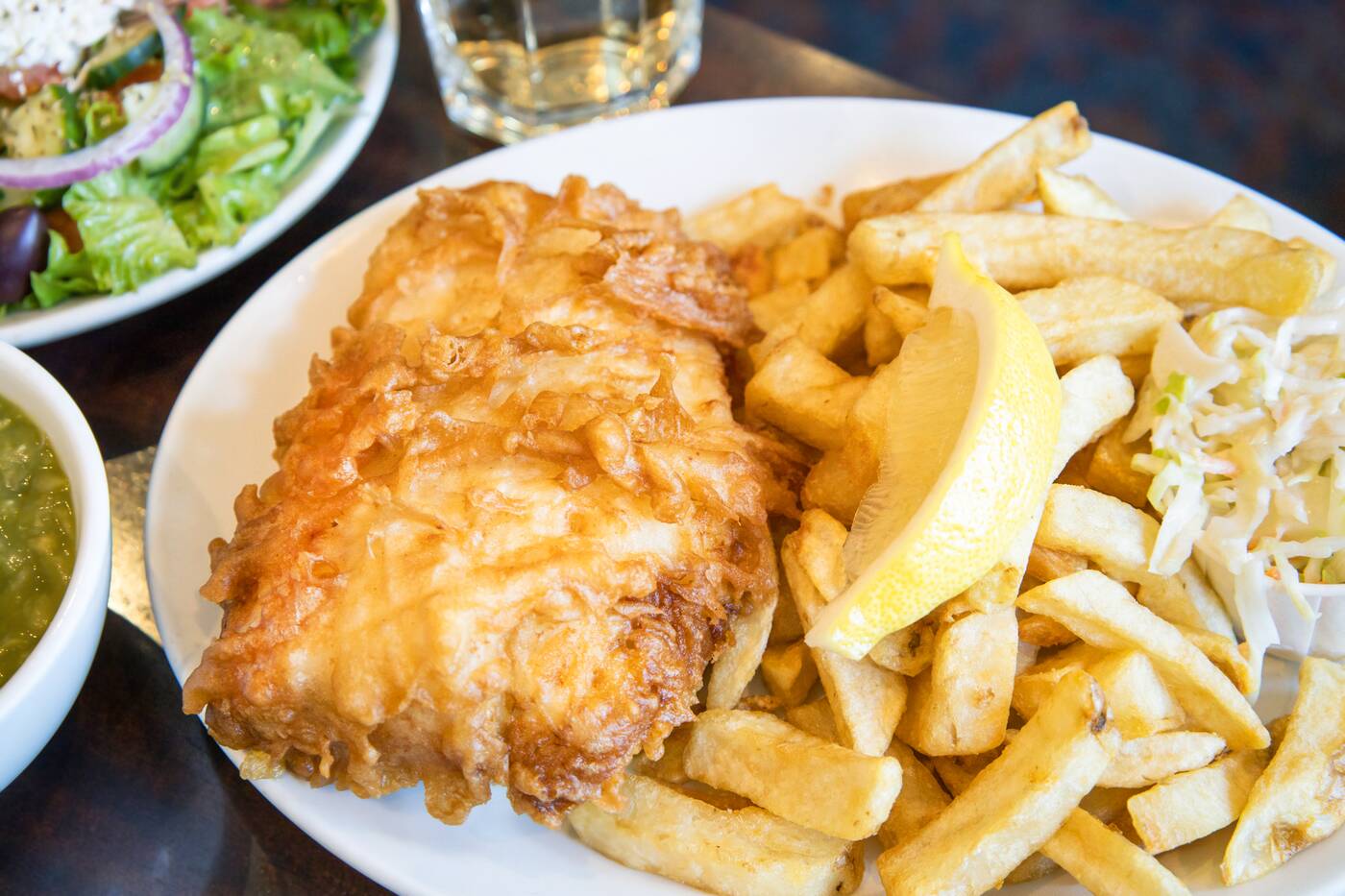 This is fine, however, as it leaves more room for the flavour of the fish to come through. Though, a bit of salt and malt vinegar do the fries some good. Haddock and chips ($16) come with a generous slab of fish, a good amount of fries and a bit of creamy slaw on the side. 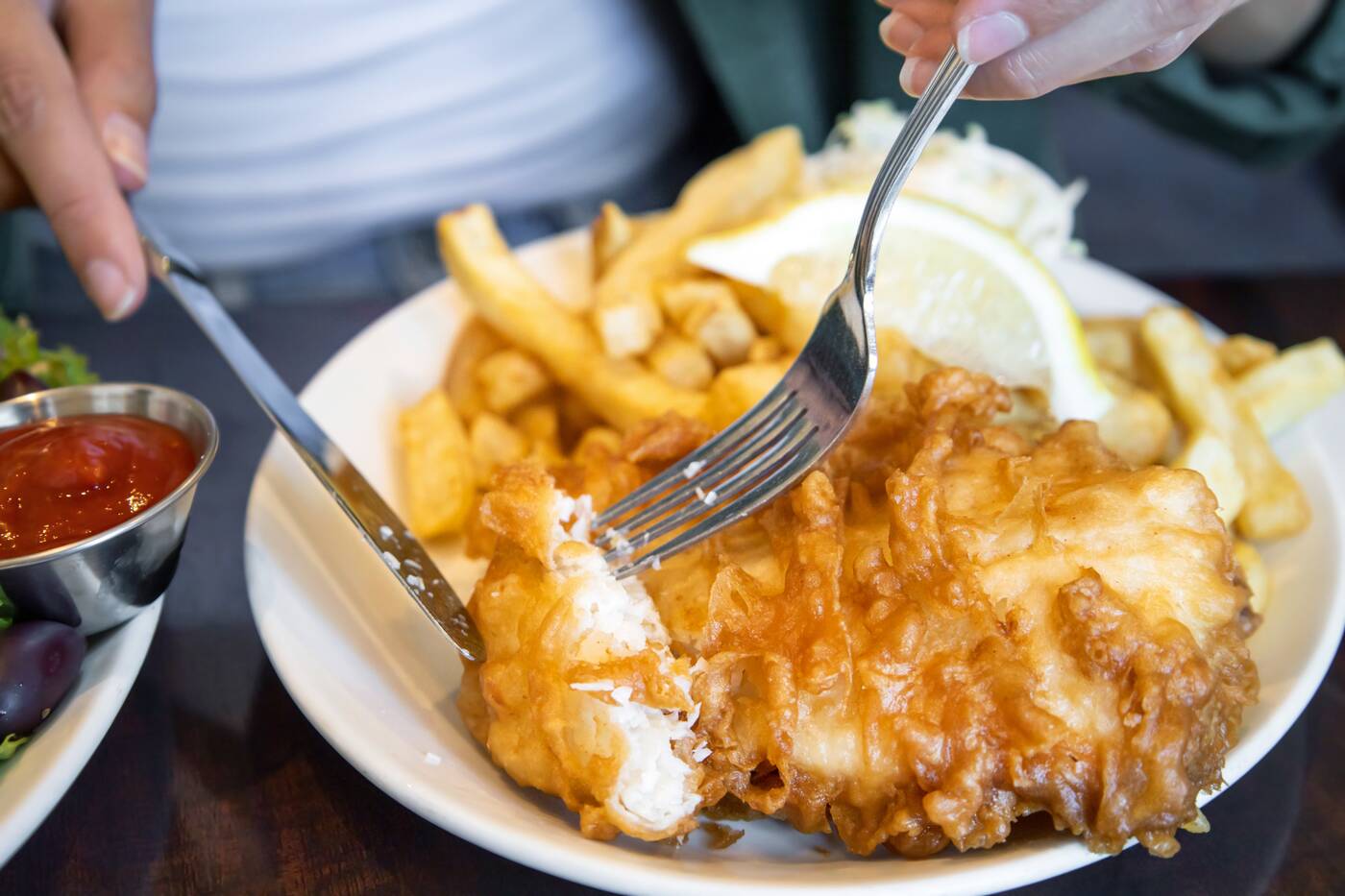 The cod ($16) is shorter and thicker than the haddock, as well as firmer. Both are battered on the lighter side and nicely crispy without being excessively greasy. 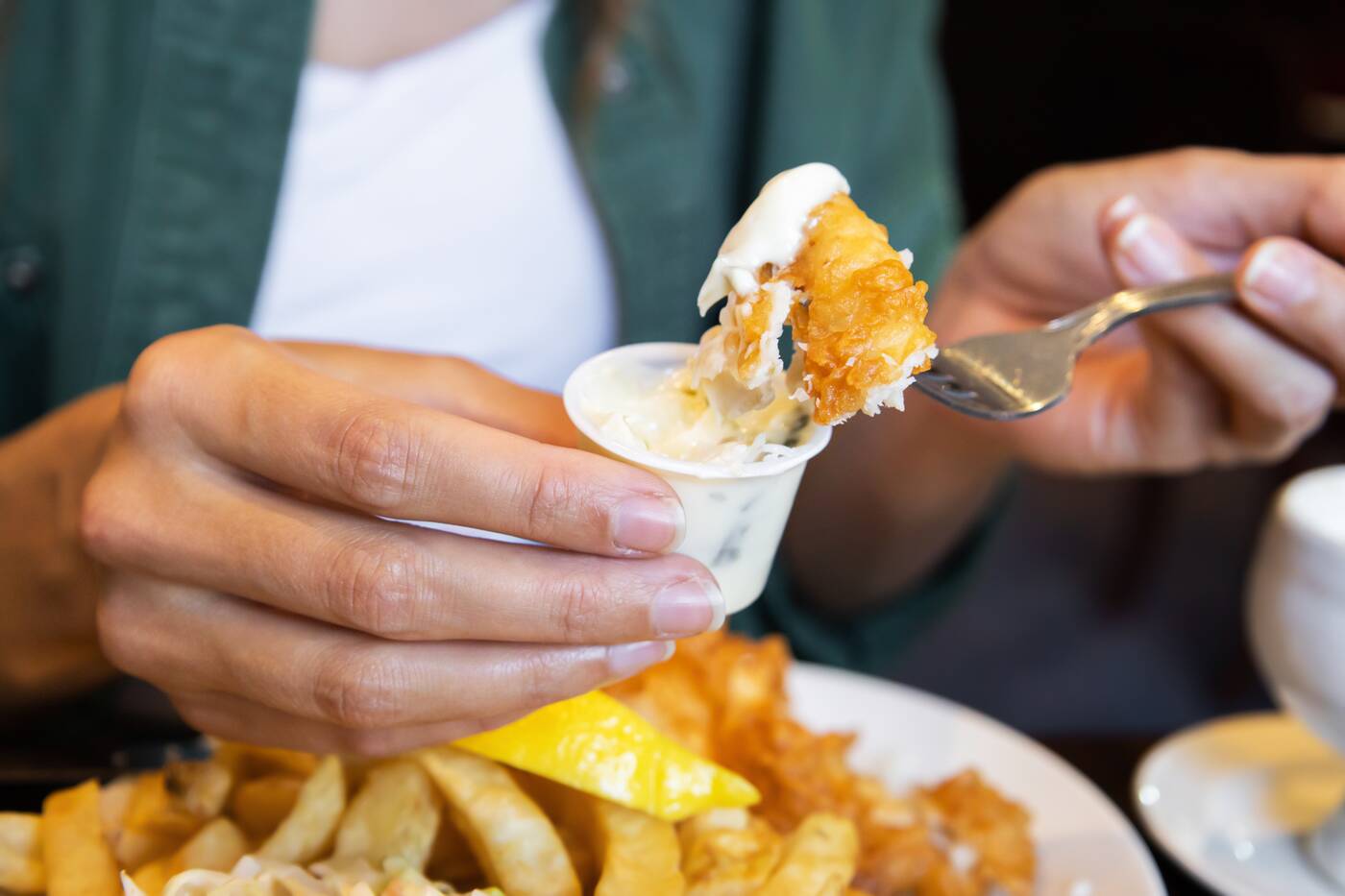 In my experience, a small container of homemade tartar sauce comes with the fish upon request. The smooth creaminess and tartness is just the thing to break up the plate full of fried food. 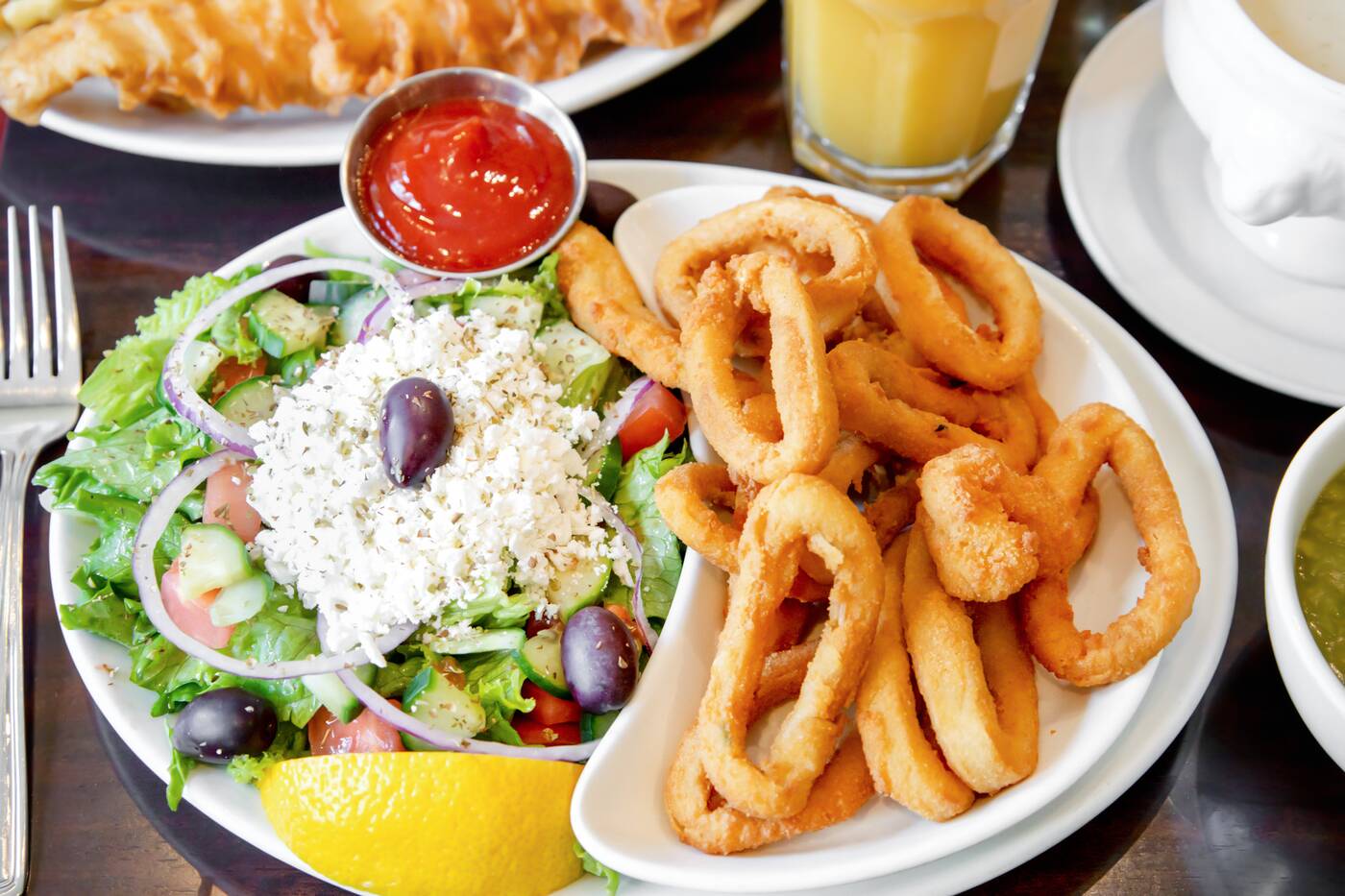 Another favourite on the menu is the calamari ($16.95), served with fries or your choice of salad between garden, Caesar, and Greek. The calamari rings are marinated in tzatziki before being hand breaded and fried for a short time at a high temperature. 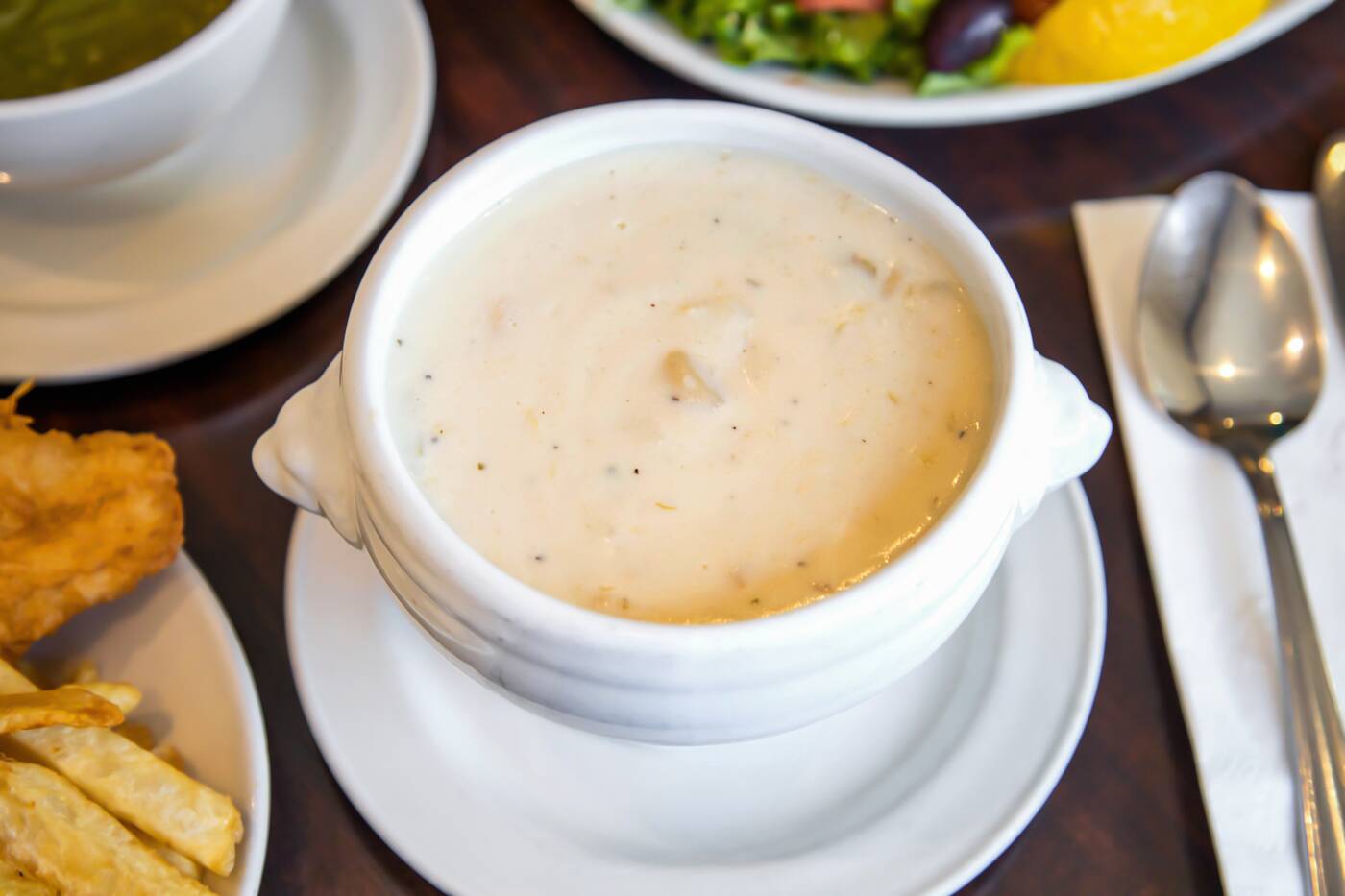 The homemade chowder ($8.75) is a hearty soup made in New England style and best enjoyed before your meal. The creamy base hides chunks of clam and potatoes throughout. 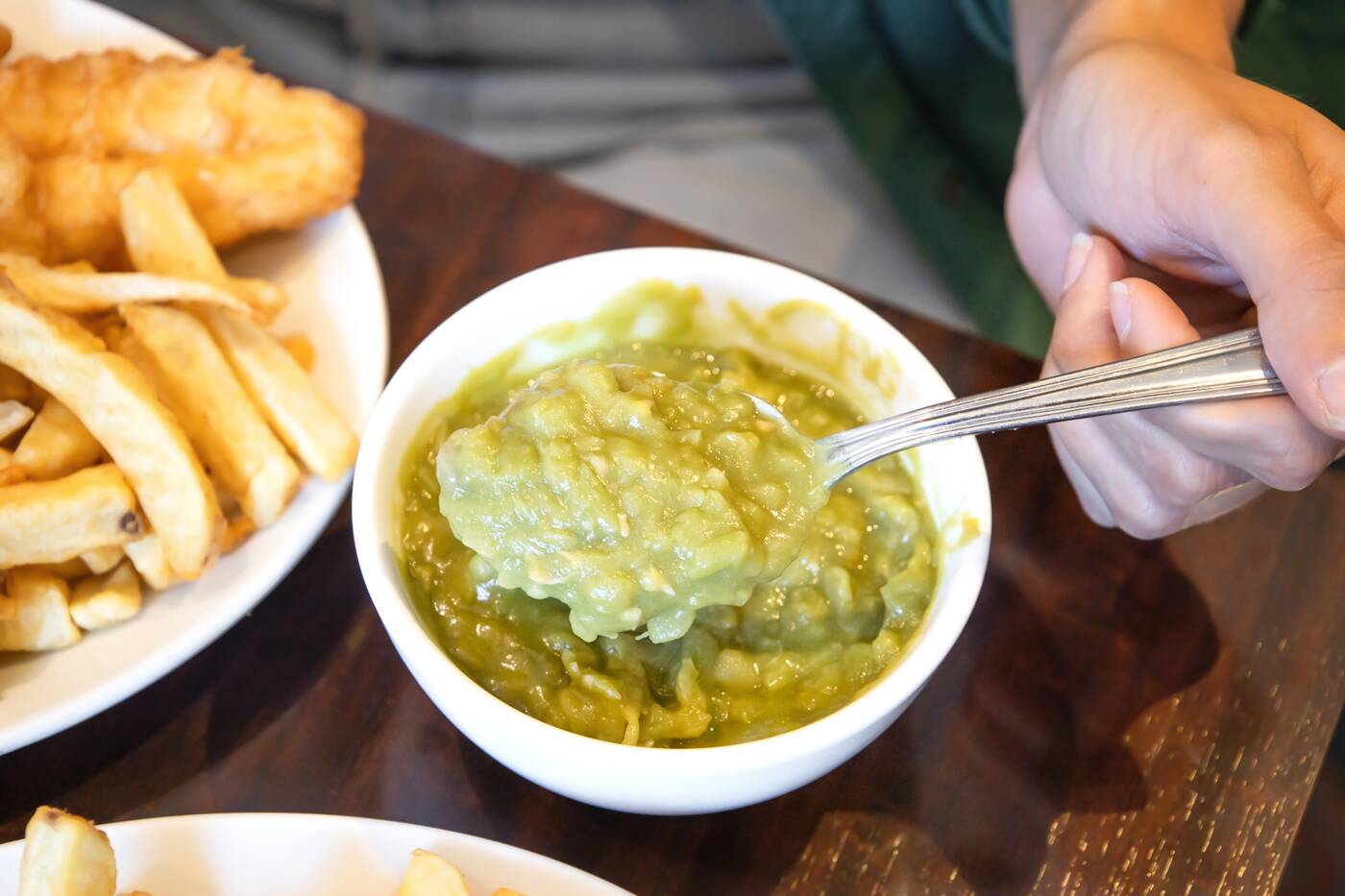 If you're looking for a taste of Northern England, mushy peas ($4.25) are also on the menu and can come as an added side. The thick pea soup is considered just as essential as tartar sauce when munching on fish and chips back in the UK. 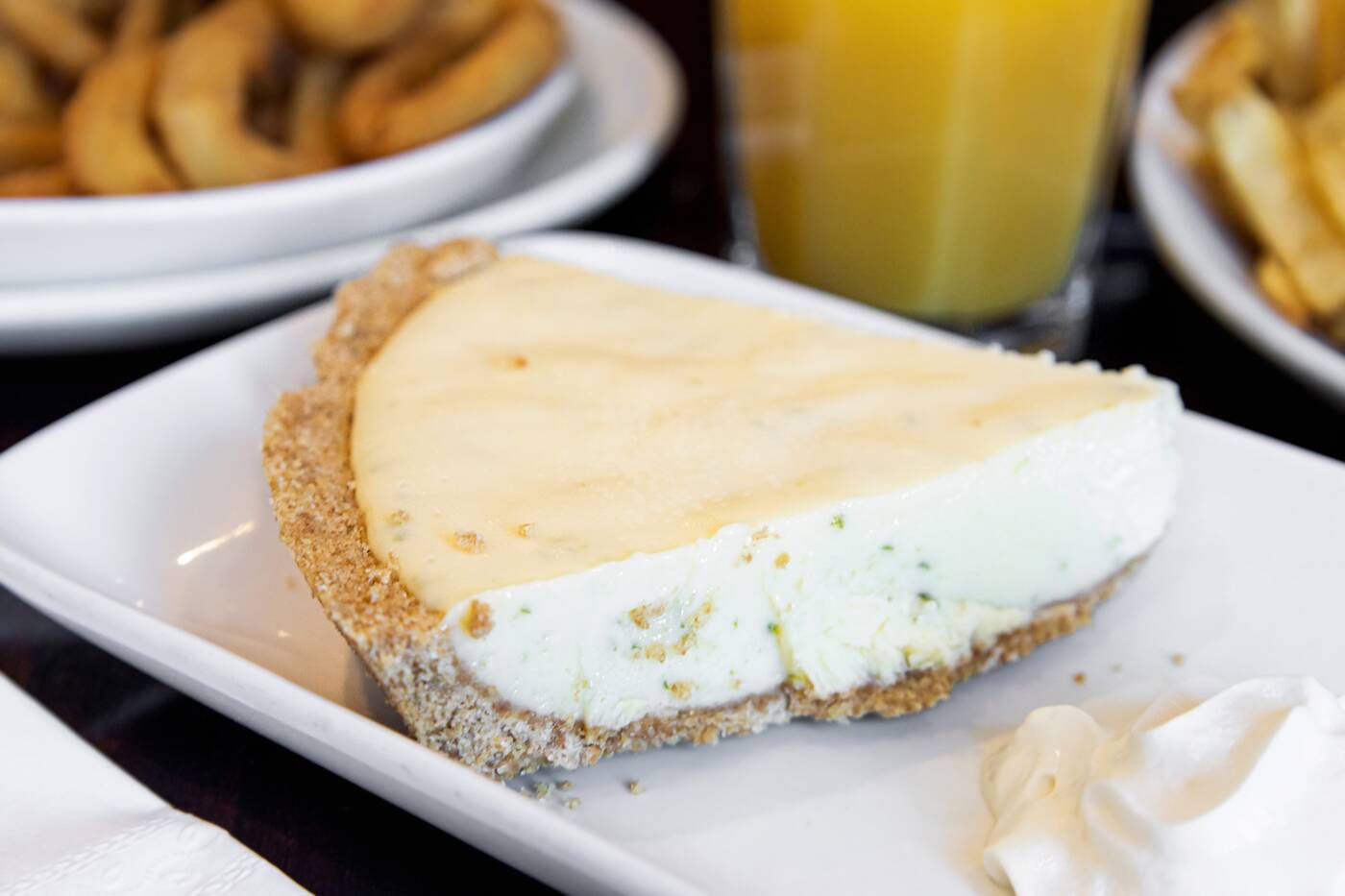 For dessert, don't miss out on the key lime pie ($8.50). Evidently homemade, the bare slice of pie features visible lime zest throughout and a small dollop of whipped cream on the side. 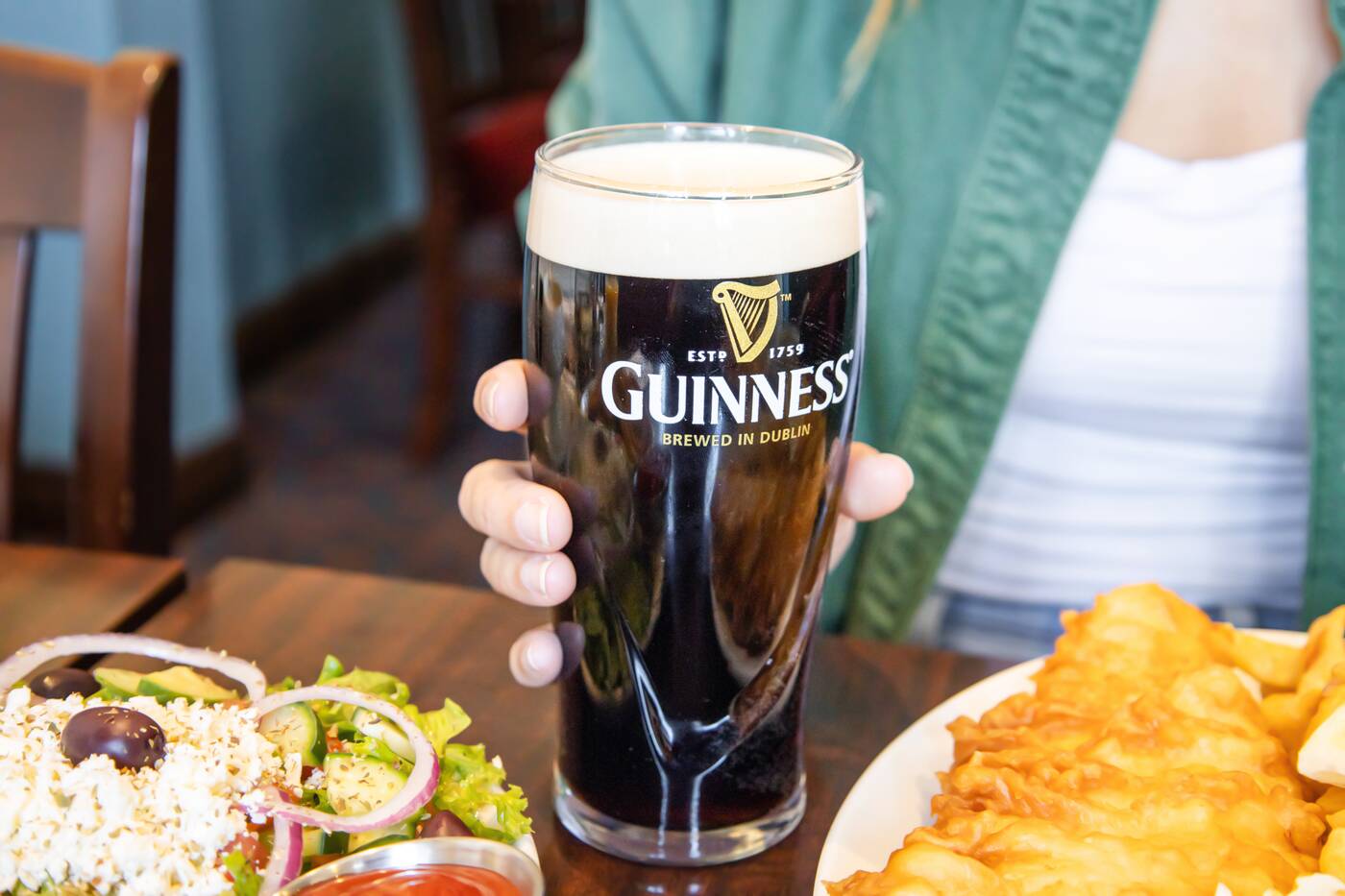 At the bar, a selection of beer is on tap including Toronto's own Steamwhistle Pilsner and Amsterdam 3 Speed (brewed just down the road). Prices range from $7.75 to $8.95 for a pint.

A tall glass of Guinness ($8.95) likely pairs the best with an order of fish and chips though. 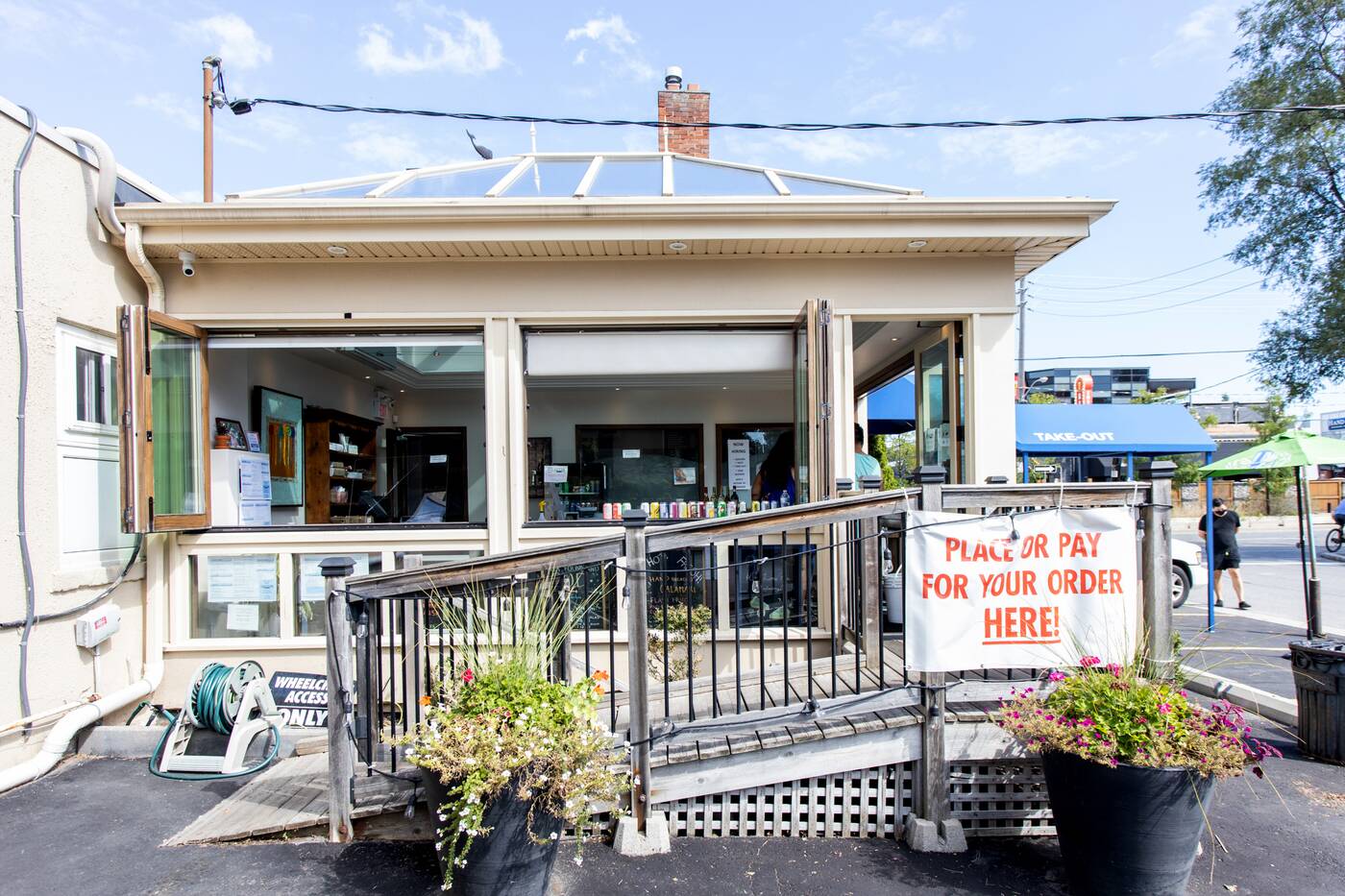 The dining room opens for dinner at 4 p.m. every day except for Sunday and the separate takeout container around the back takes care of the hungry regulars until then. 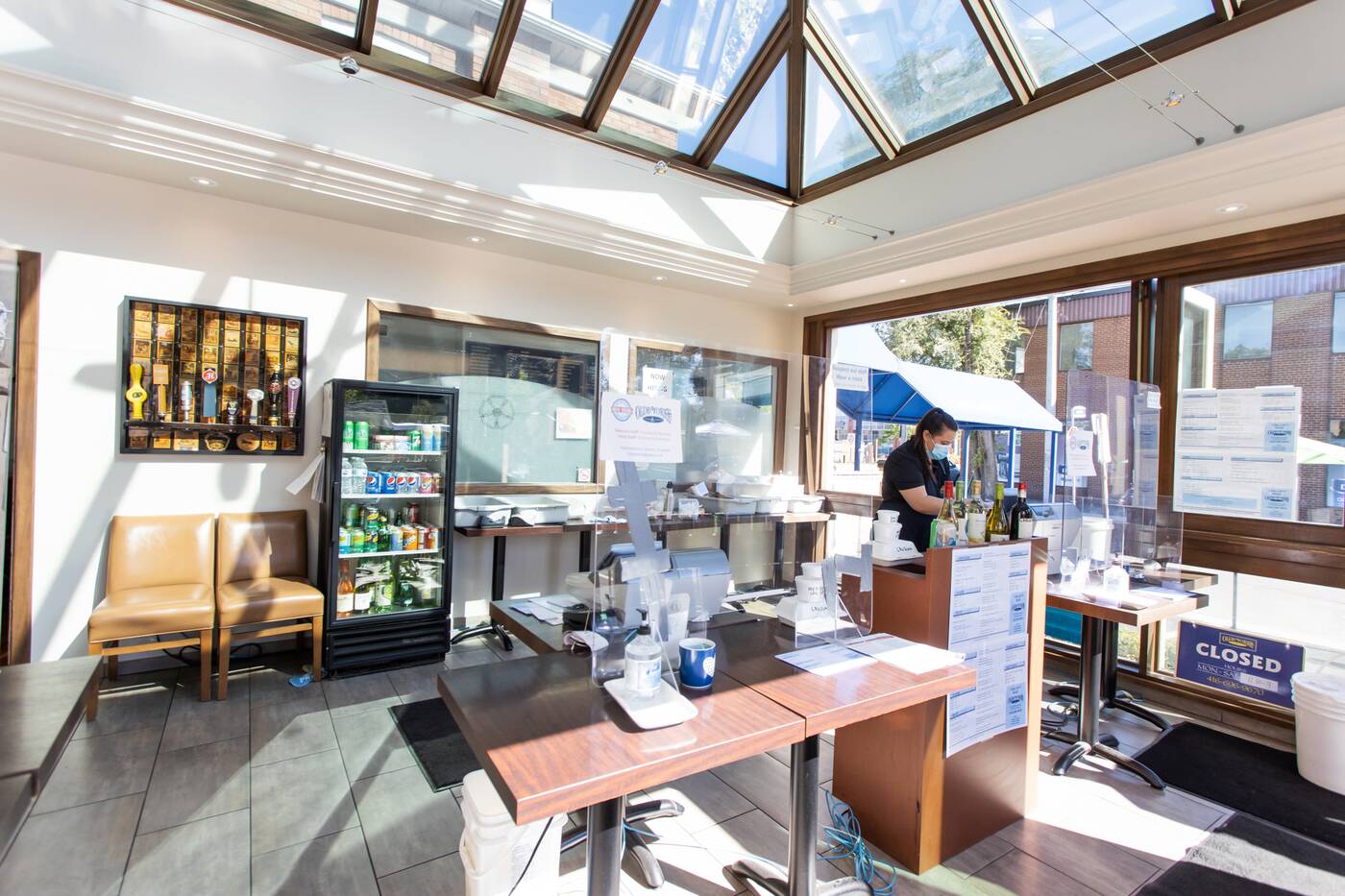 Whether it's lunch or dinner, long lines are usual at Olde Yorke. Don't be surprised if it's spilling out onto the sidewalk during a rush – and rest assured, the wait will be worth it. 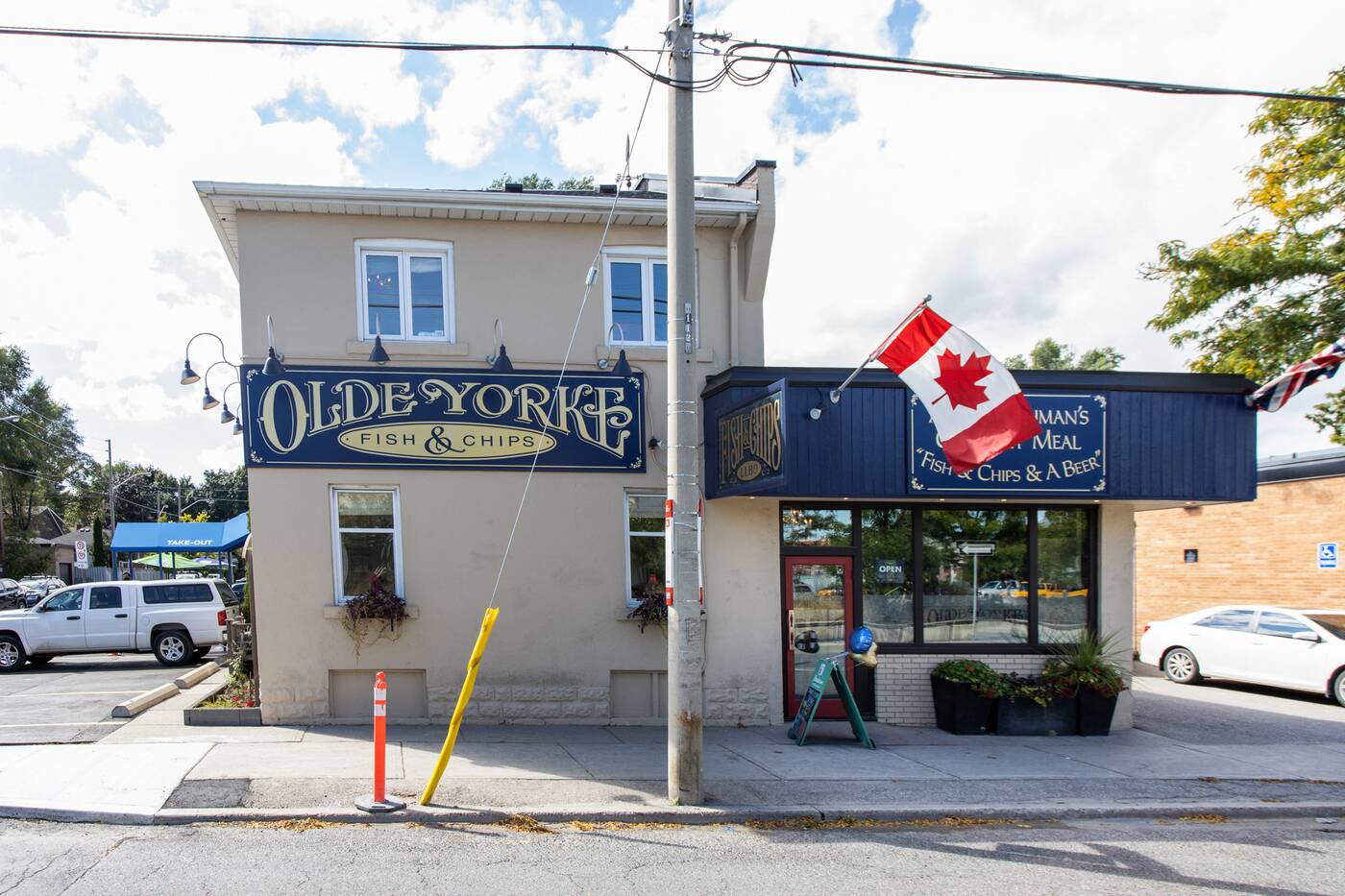