Easily the city's most stylish ramen joint, Oji Seichi takes over the derelict unit that once housed East Chinatown's Kam Tat BBQ with a meticulously designed shop that acts as a shrine to noodles. 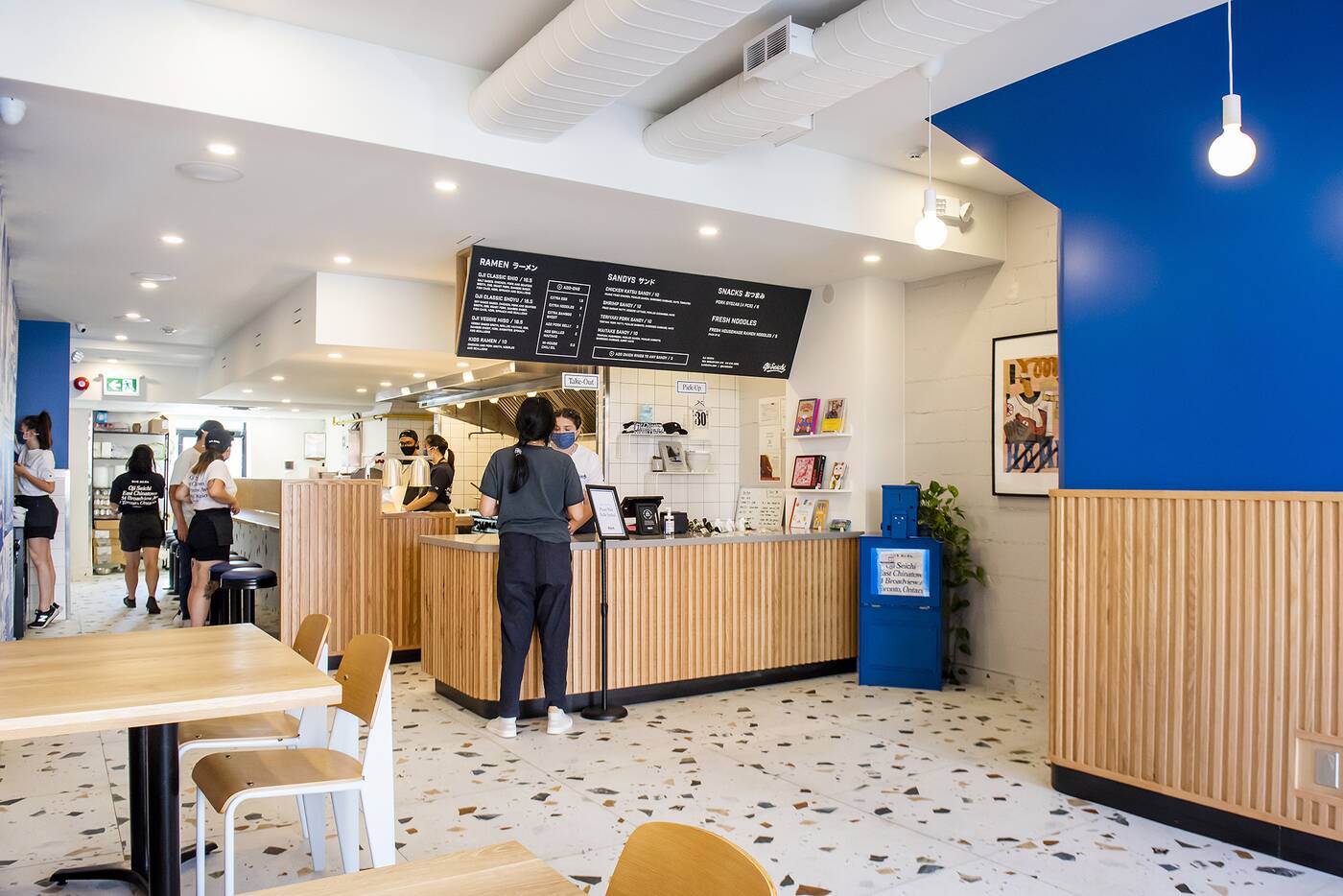 The restaurant is a casual ode to their extended family's Japanese-Canadian heritage and one beloved uncle, or oji-san, in particular. 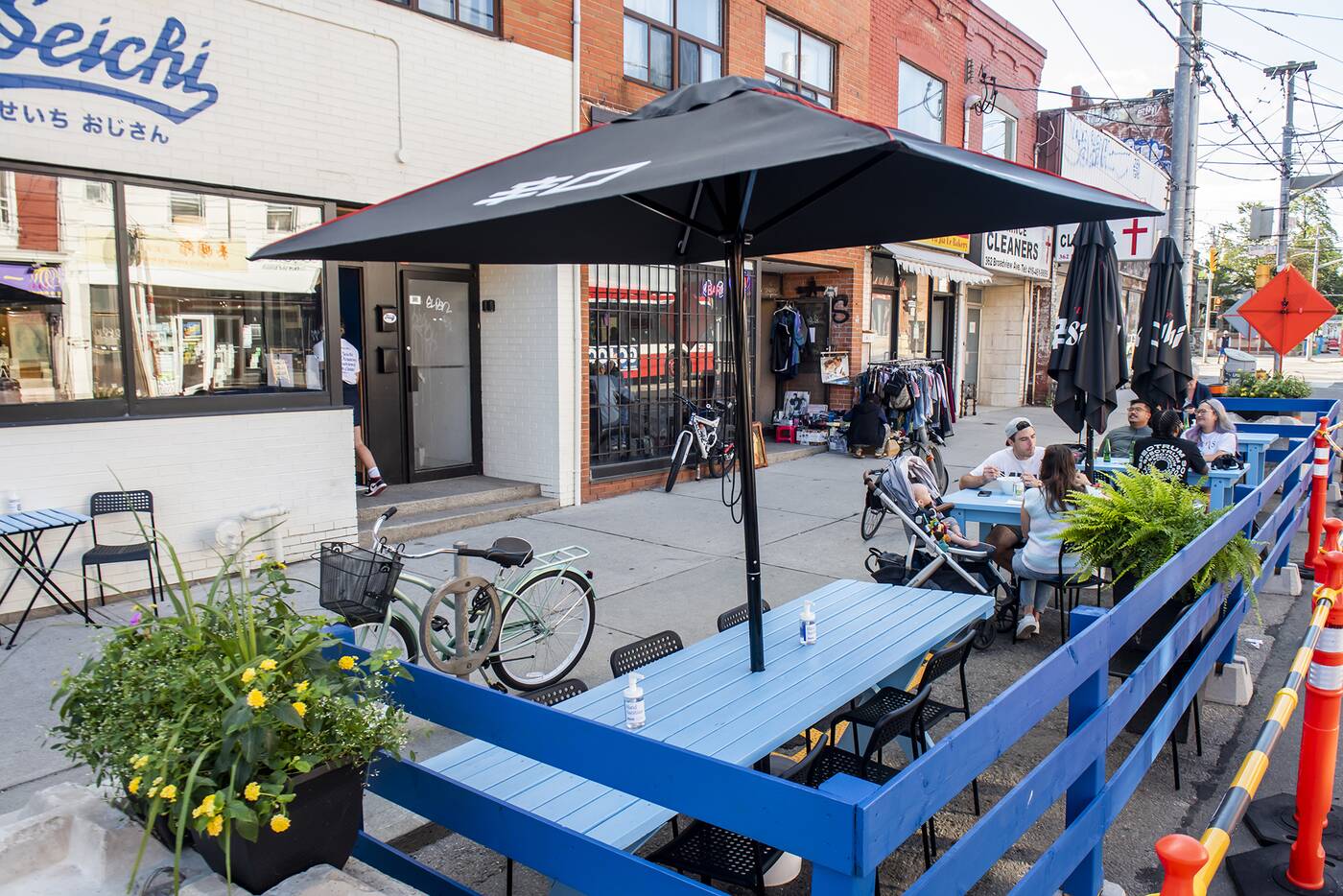 Seichi Oji-san, who went by Sandy, was a house painter by trade. He's since passed, but his joie de vivre has been immortalized in a wall mural by Cam Miller. 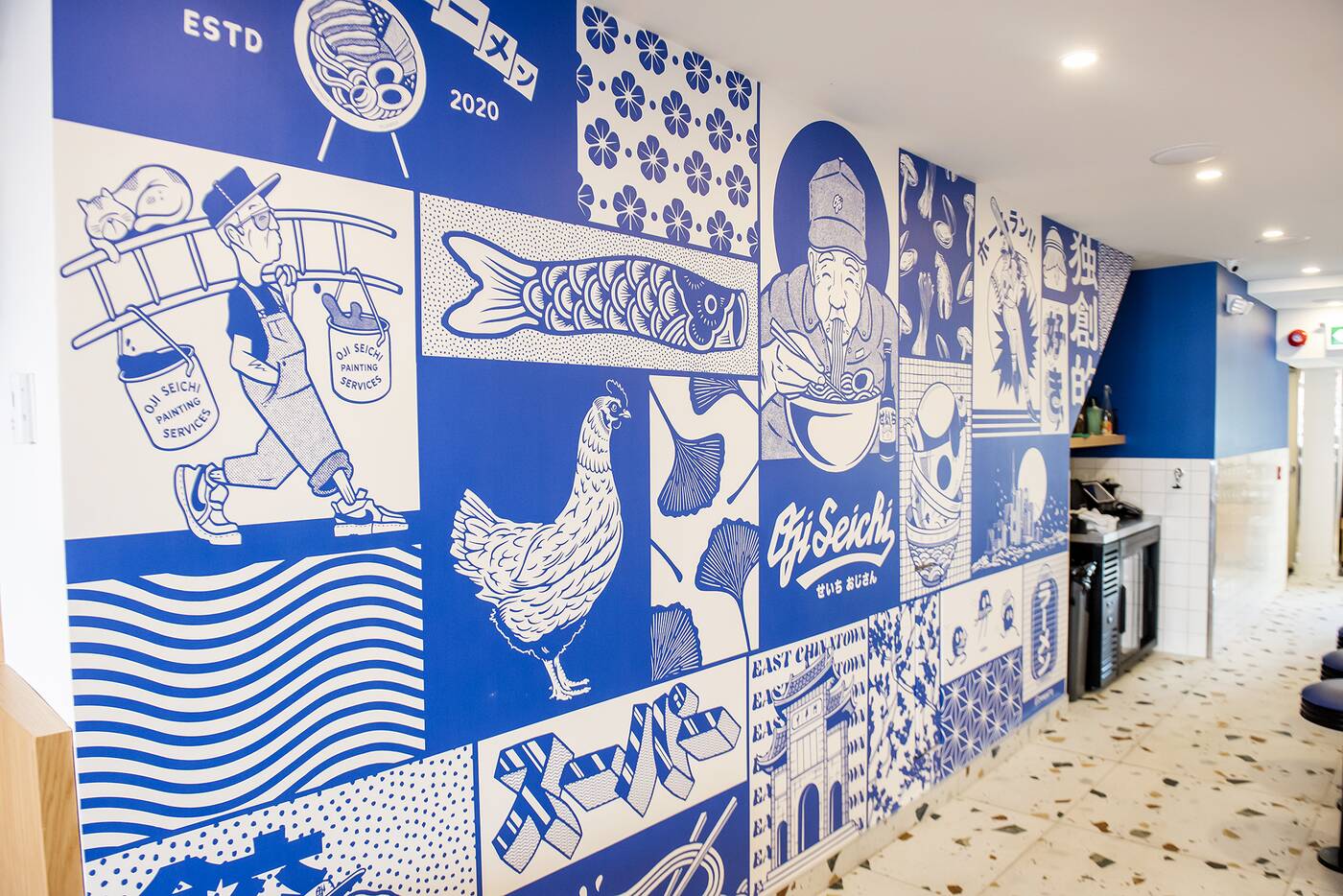 There's a painted hommage to the legendary Japanese-Canadian baseball team The Vancouver Asahi by Kellen Hatanaka as well. 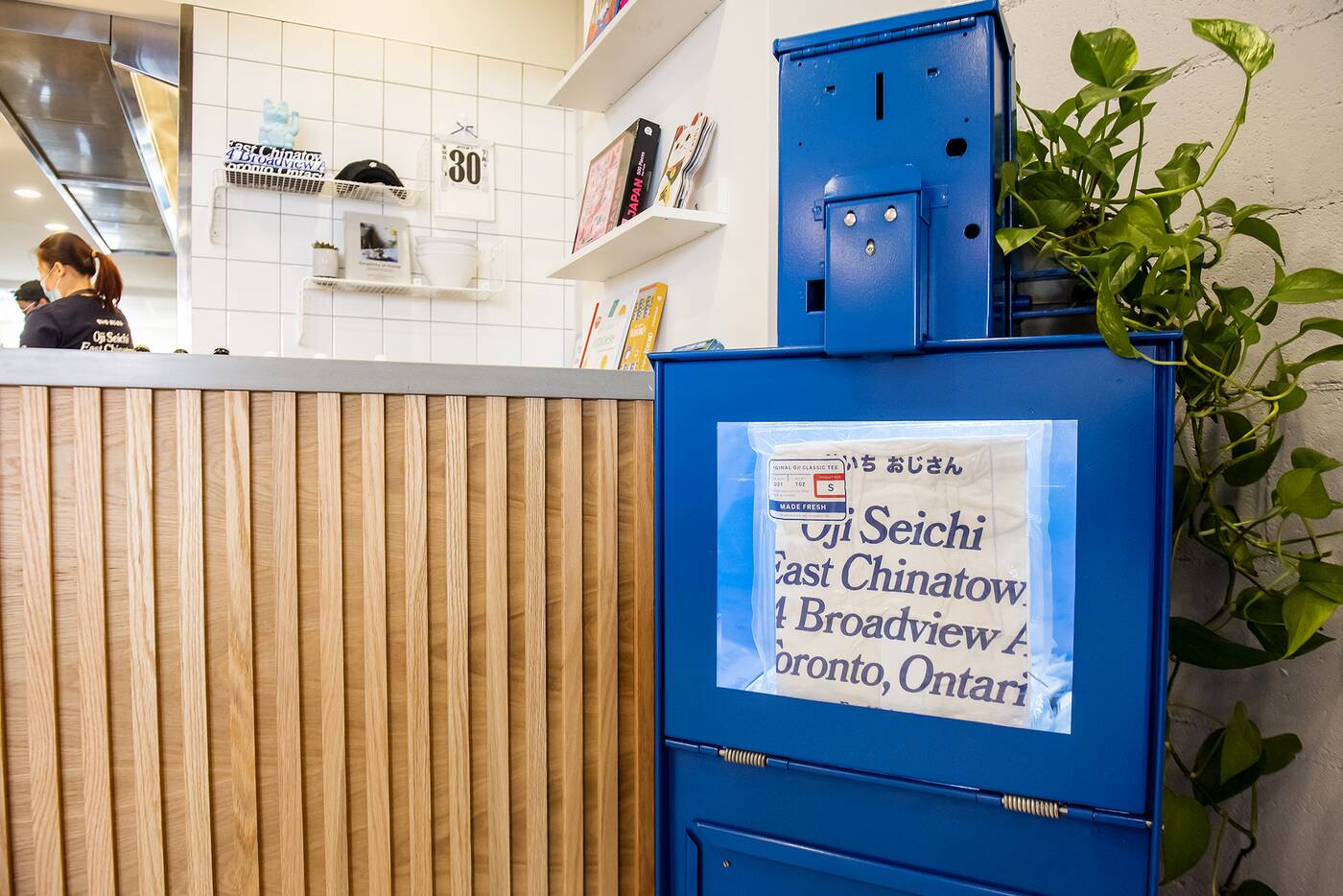 If there's one thing Oji Seichi has on lock, it's the branding, thanks to Duong, the creative director. Wearable merch, books on ramen, and some East Chinatown shoutouts are hard to resist. 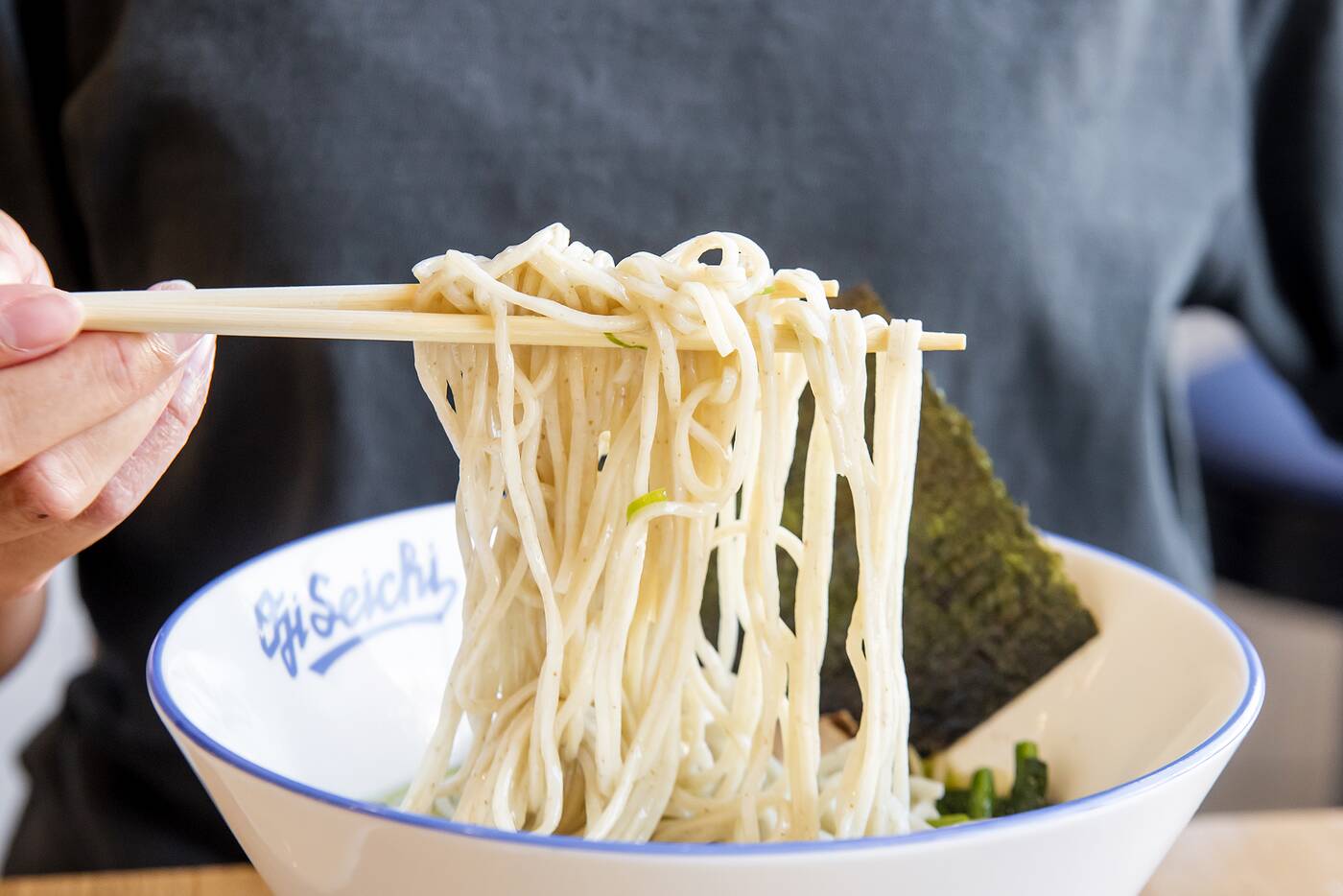 What sets Oji Seichi apart from more traditional ramen shops are its signature noodles, made daily in an imported ramen noodle machine downstairs that cost a whopping $5oK.

Noodles are a blend of whole wheat, rye, and white flour, made with alkaline salts, and more textured than the usual silky ramen noodle. You can buy packs of two to take home for $5. 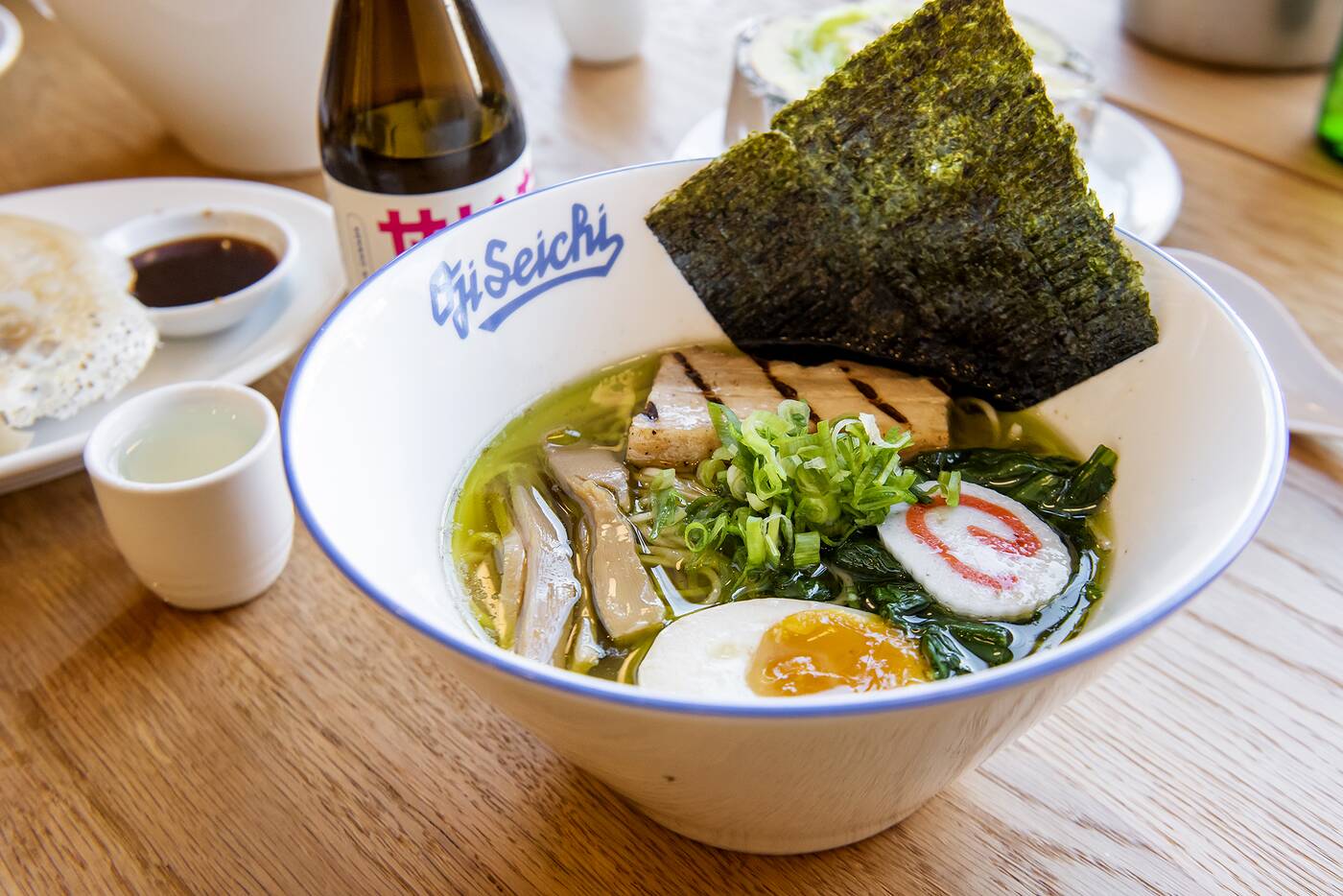 The ramen menu is lean, with three options: the classic shio, shoyu, or veggie miso for $16.50 per bowl. Oji Seichi's broth is a mix of chicken, pork, clams and mussels. 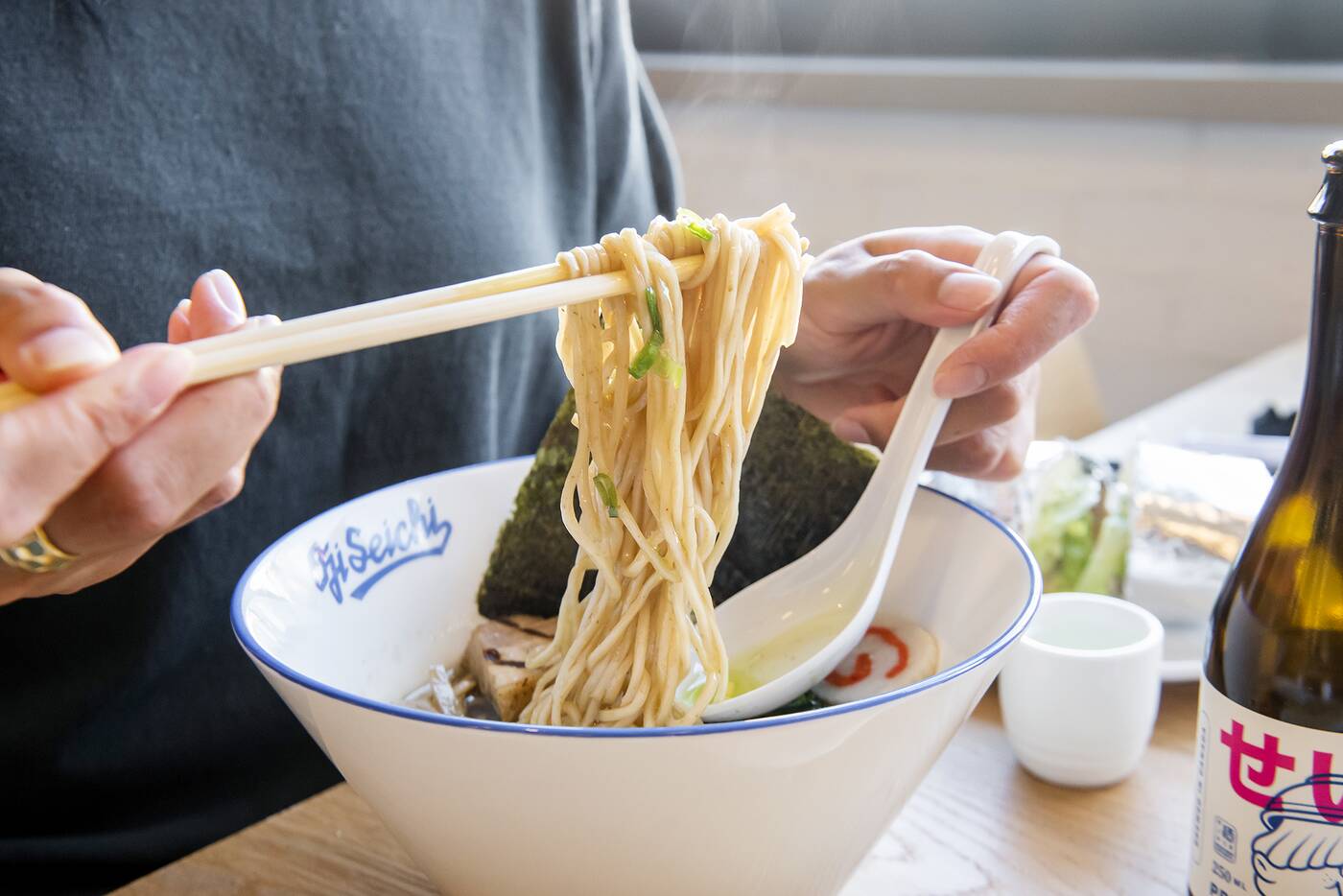 A layer of green onion oil sits on top of the broth, adding an element of green-hued fattiness to the rim. The shio and shoyu have your usual mix of bamboo shoots, fish cake, nori, spinach and scallions, and thick pieces of roast pork. 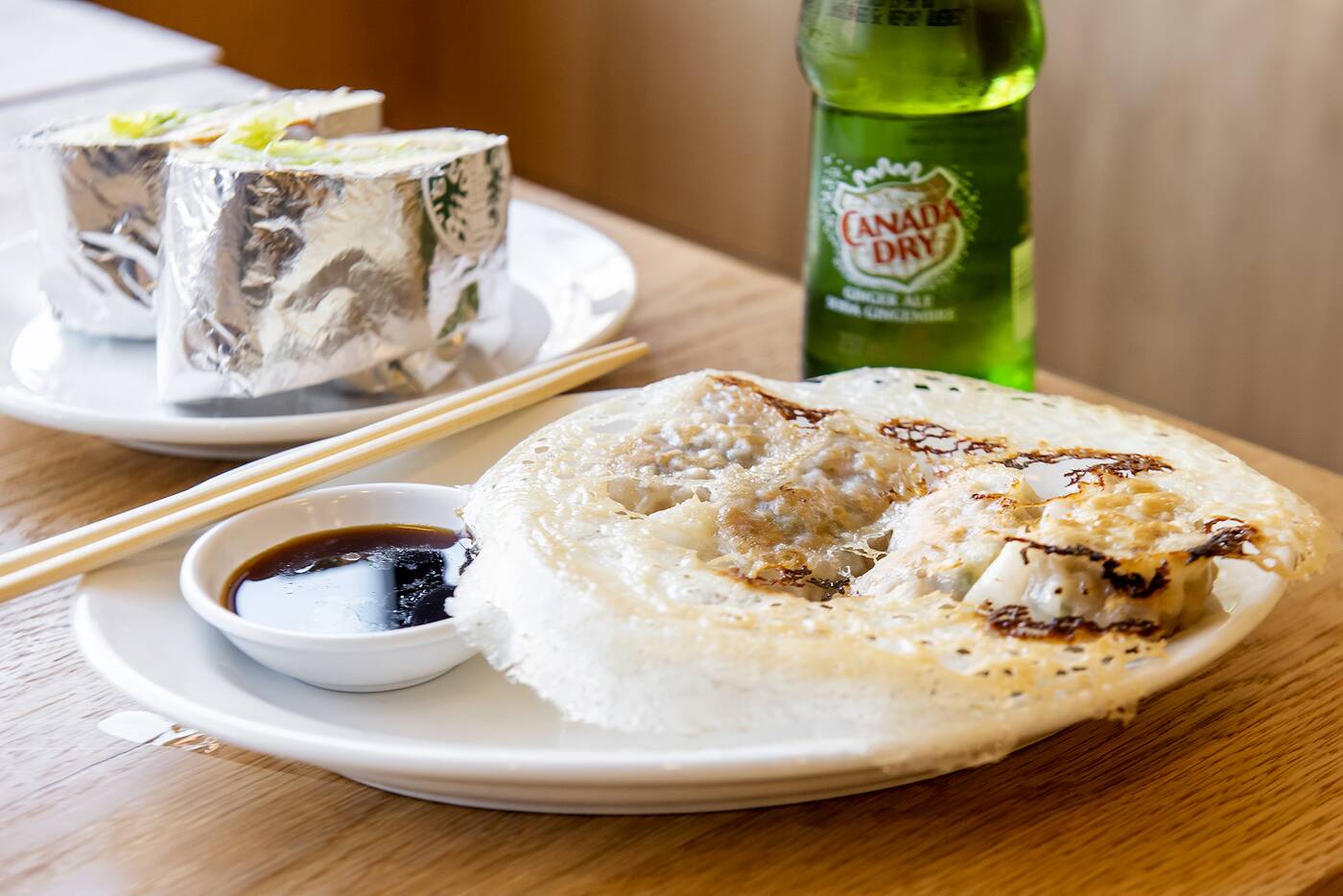 Four pieces of pork gyozas are $6, but unfortunately, our plate doesn't come with the appetizing golden hue or flavours that make most crispy-skirted dumplings hard to resist. 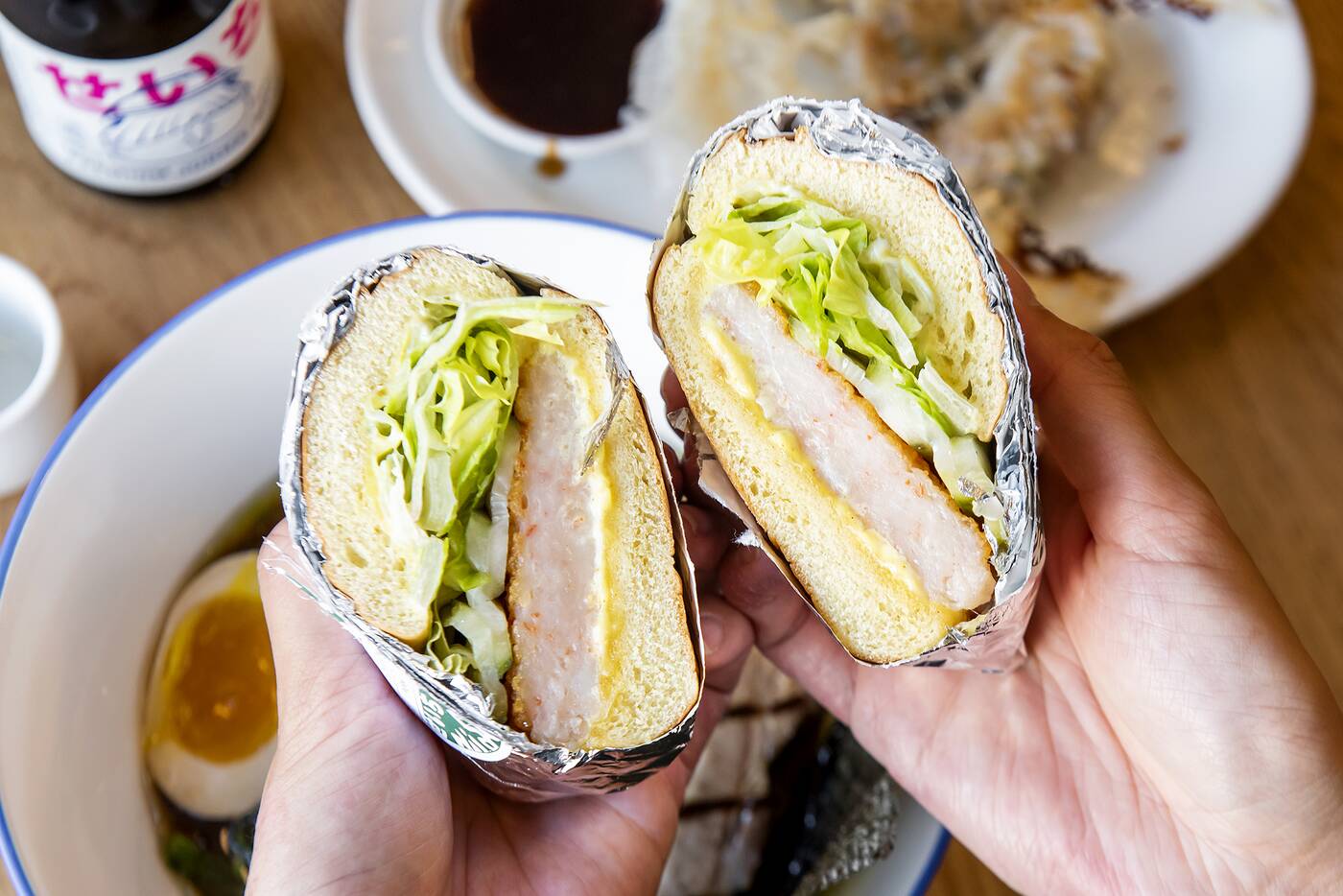 The Sandy's are their take on Japanese sandos, which more commonly use shokupan. Here fillings are sandwiched between Martin's Famous Potato Rolls, the buns currently defining smash burgers in Toronto.

The shrimp sandy ($12) is a griddle-smashed whole shrimp patty, pickled, iceberg lettuce and mayo. I recommend adding onion rings for $3. 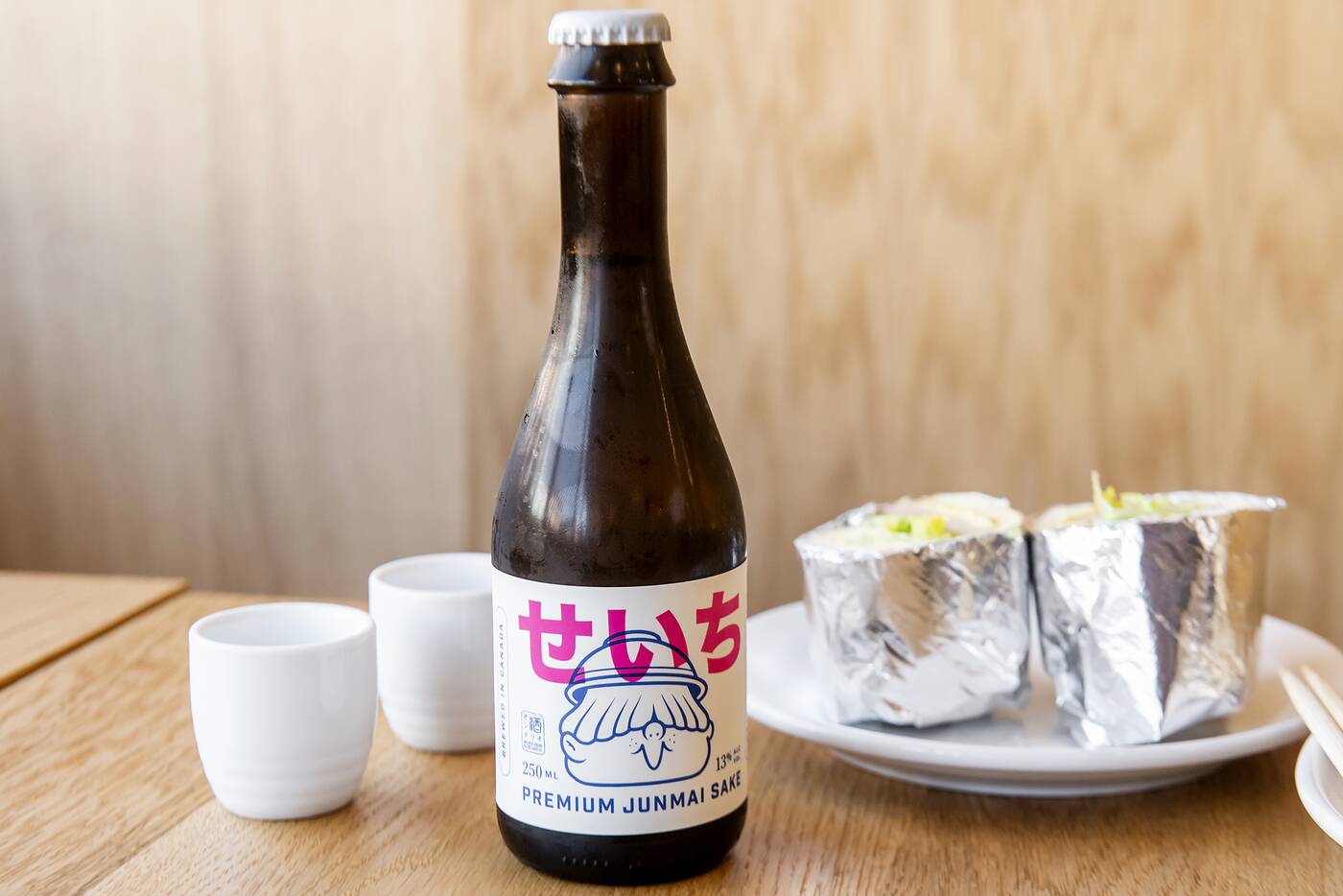 Oji Seichi has collaborated with the Distillery District's Izumi brewery to create a premium junmai sake. It's a smoky drink with maple syrup and chestnuts and notable hints of plum. 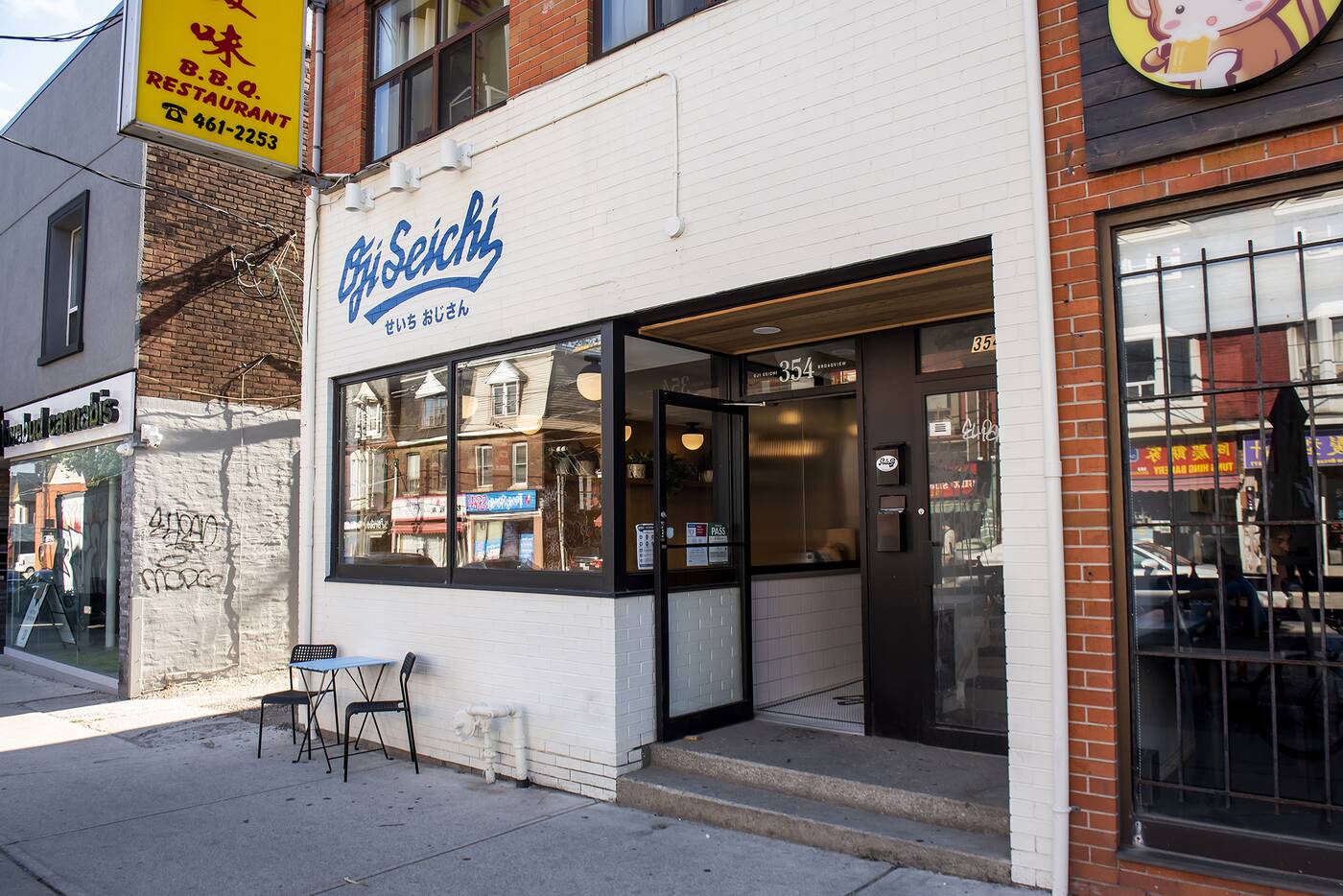