Noorden is a sibling restaurant to Little Sister and Bar Batavia . Owners Jennifer Gittins and Michael van den Winkel decided to replace Quince Bistro, their previous Mediterranean restaurant of nine years with a place that complements their other offerings down the street.

The Yonge and Eglinton area restaurant's name means "north" in Dutch, as that reflects its location to Bloor - and to Little Sister. While the latter is an Indonesian snack bar with Dutch influences, this is the converse: a modern Dutch food bar that has mostly Indonesian-inspired flavours (Indonesia used to be a Dutch colony). 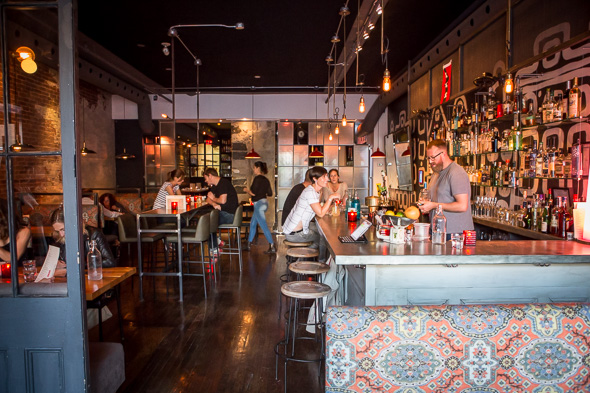 Gittins and Van den Winkel re-outfitted the space themselves, and it has an industrial-hip feel, with exposed brick and decor touches that hint at its Dutch-ness (the XXXs are a nod to Amsterdam's coat of arms and not its Red Light District; similarly, the pink paaltje on the bar is not meant to look like a sex toy, but a common street pole found all over Amsterdam). 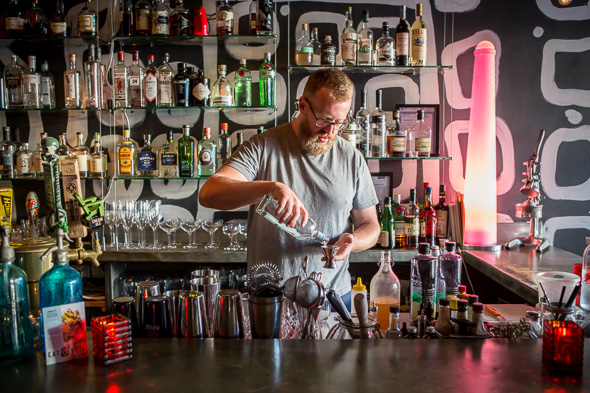 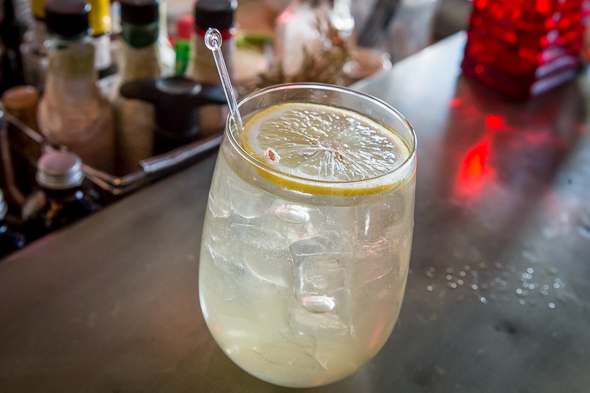 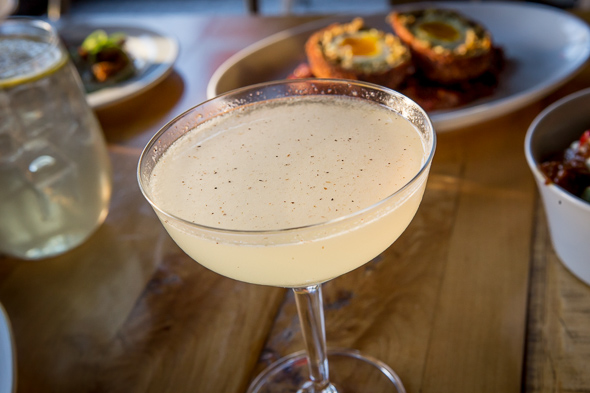 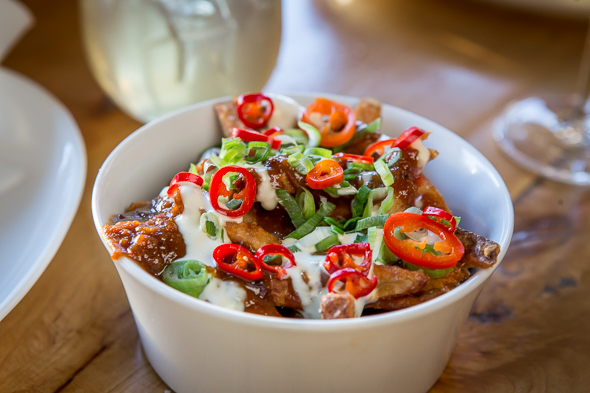 This one has a touch of sweetness and a spicy kick to it, and is an excellent accompaniment to the patatje oorlog , or war frites ($7), a tasty combo of crispy fries with mayo, scallions, bird's eye chilis and an addictive peanut satay sauce. 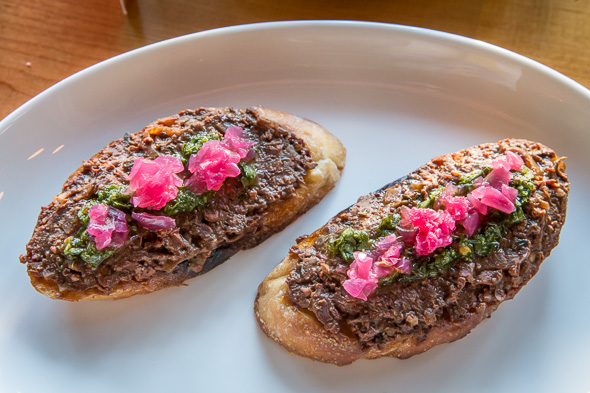 Along with the war frites, we sample some other bar snacks, like the chicken liver toast ($5), topped with chimichurri and pickled onion. Even though my dining companion is not normally a fan of liver, he is still willing to eat this - the ultimate compliment. Personally, I think it's just plain delicious. 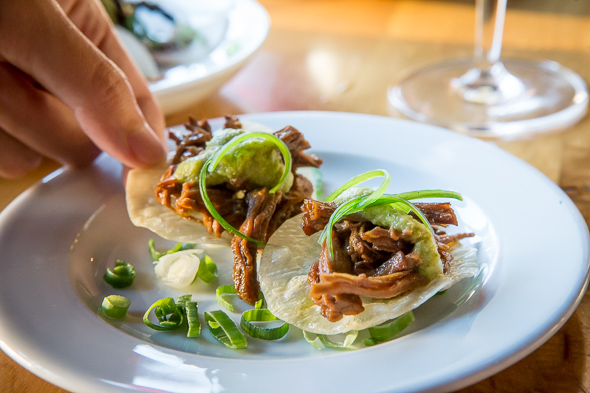 Soy braised brisket ($4) on crispy "won tons," come with a dollop of tomatillo salsa verde, making for a great fusion of Asian and Latin American flavours. 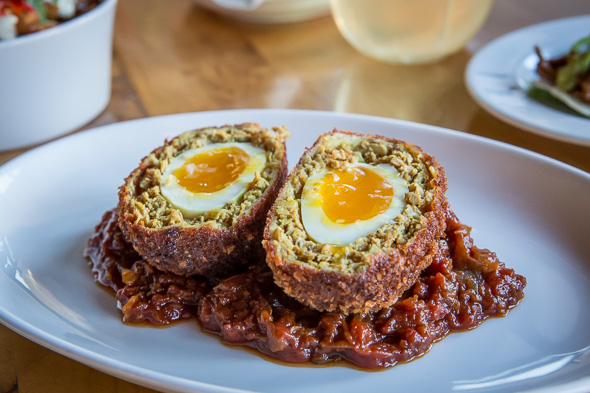 From the main food menu, there's the Scotch egg ($11.75) on a bed of tomato chili jam. This turns out to be a fave of ours, as the jam adds a spicy sweetness to the savoury egg. 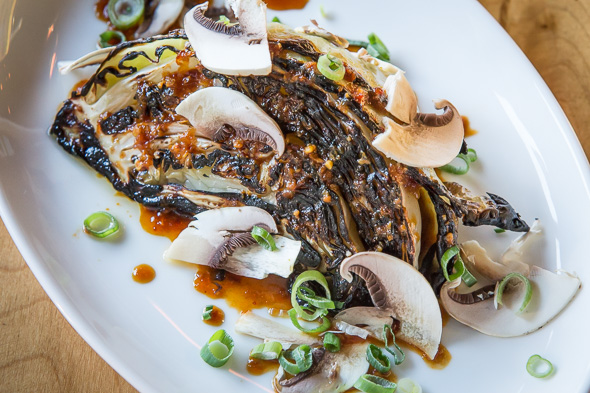 Grilled white cabbage ($7.50) has been made infinitely more interesting, dressed up with sambal (an umami hot sauce), gula java (coconut blossom sugar), kecap manis (sweet soy sauce), lemon and rendang oil, along with scallions and mushrooms. It has a pleasing char to it and hits all the right flavour notes and textures: sweet, spicy, salty, crunchy. 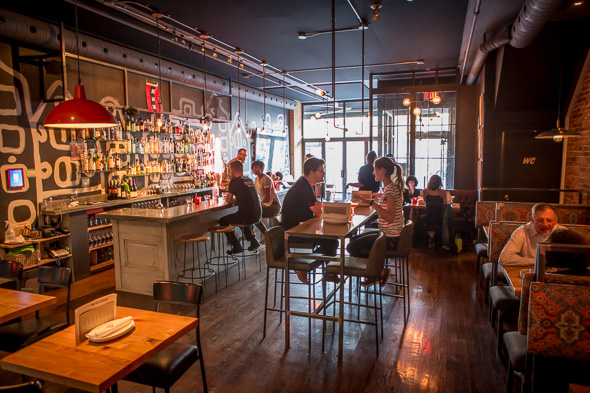 Van den Winkel and Gittins have carried over what they started with Quince and continue to offer rijsttafel or "rice table" (a feast of Indonesian dishes, Dutch style), an off-the-main-menu meal for six or more people that requires at least one week's notice, at a very reasonable $48/person. This is definitely a unique experience for Toronto that I want to try in the future.

Sadly, Noorden has an expiry date, as its lease is up in mid-2018, and there's no chance for renewal. Hopefully it will find a new home by then, as Gittins and Van den Winkel have a real winner here. Enjoy it while you can. 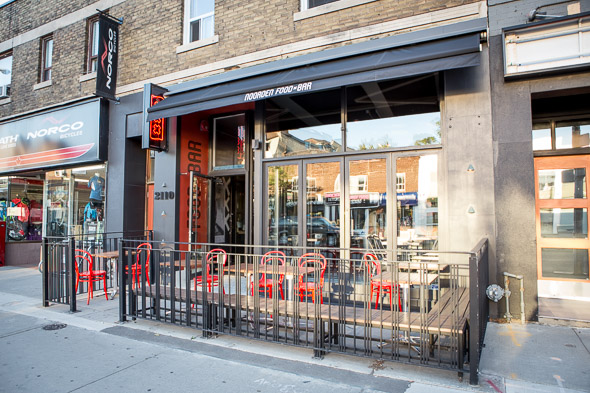