Mado Cafe is your one-stop shop for Turkish delicacies serving breakfast, lunch and dinner within its cafe, as well as a whole variety of homemade baklava and Turkish ice cream for dessert.

Tucked in a plaza off Dufferin Street not far from Yorkdale Mall, the exquisite space comes with tall ceilings and a large two-part dining room filled with a mix of marble and wooden-topped tables. 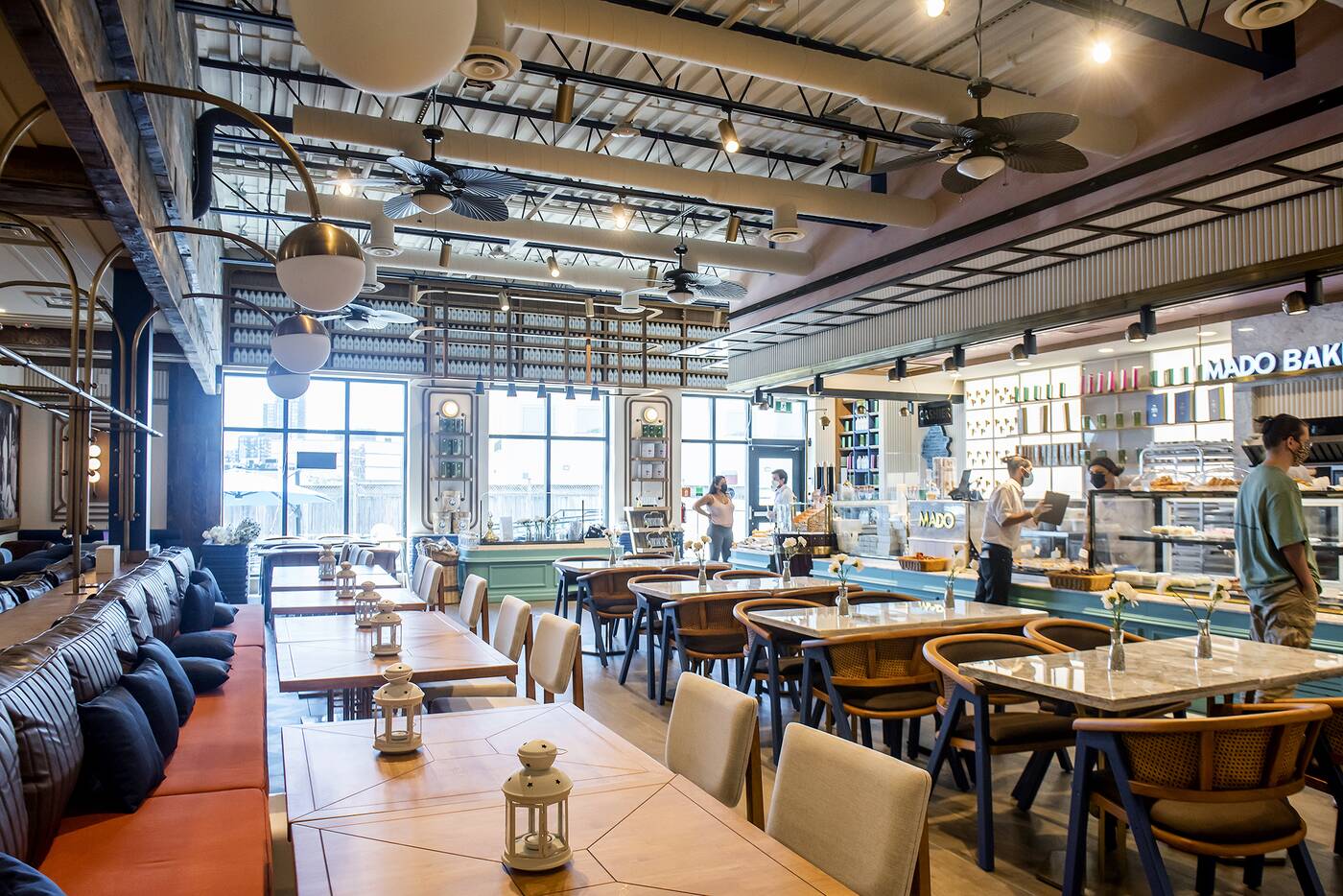 The spot comes as the very first of its kind in North America, and its reputation gained through 300 outlets in Turkey and over 20 other countries around the world has already drawn lines out the plaza. 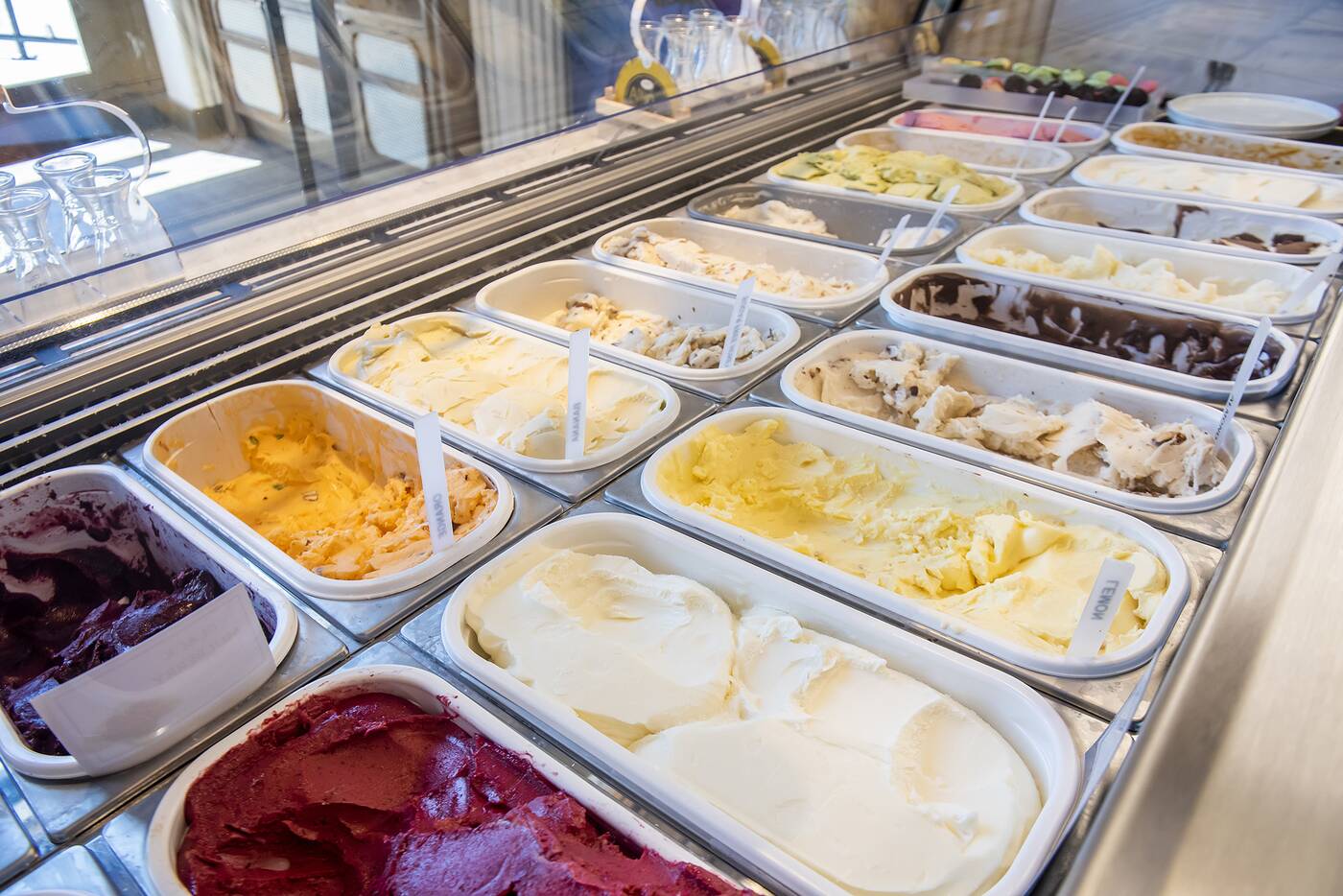 The global chain started in the formerly named city of Maraş in the Mediterranean Region of Turkey, which is also where dondurma, the Turkish ice cream that earned Mado its international fame, is believed to have originated. 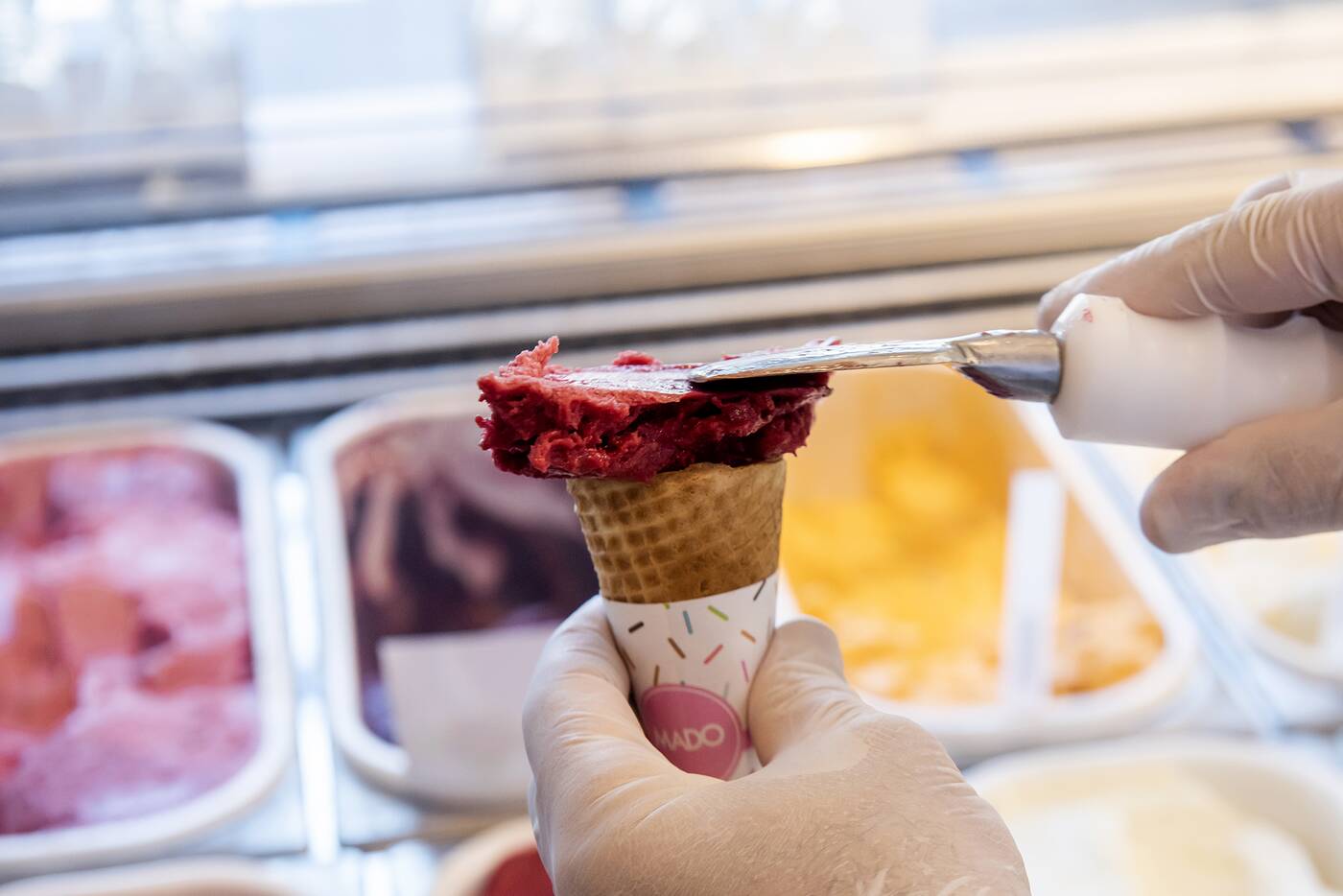 Although it might look similar to gelato, the texture puts it in a category of its own. Made with goat milk, as well as two thickeners: mastic gum and salep, a type of flour made from the root of the purple orchid, Turkish ice cream is known for its chewy, almost elastic, consistency. 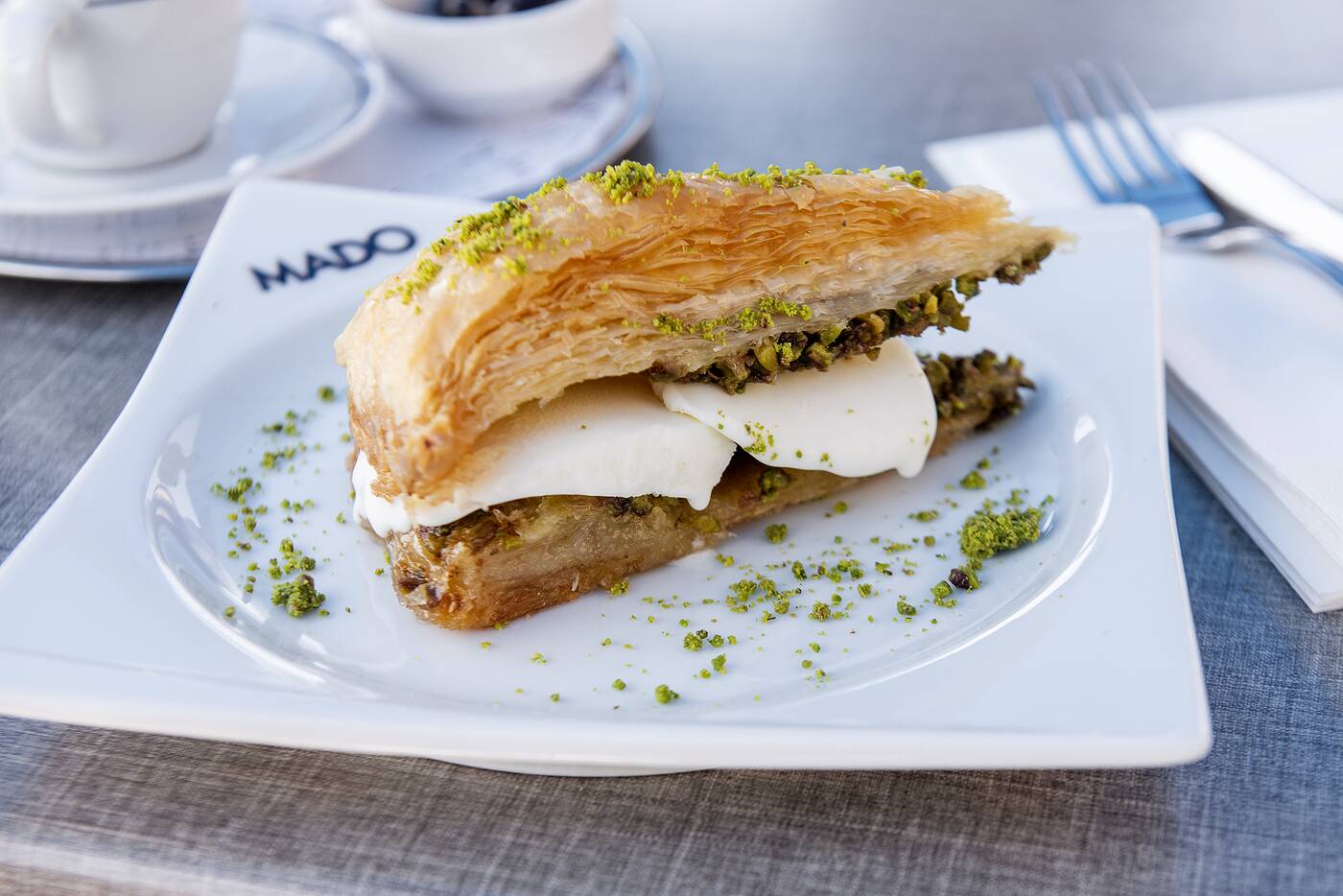 You can get scoops of plain (salep), chocolate, strawberry, lemon, walnut, pistachio, almond and banana in either a cup or cone or between two pieces of carrot slice baklava for an epic ice cream sandwich. 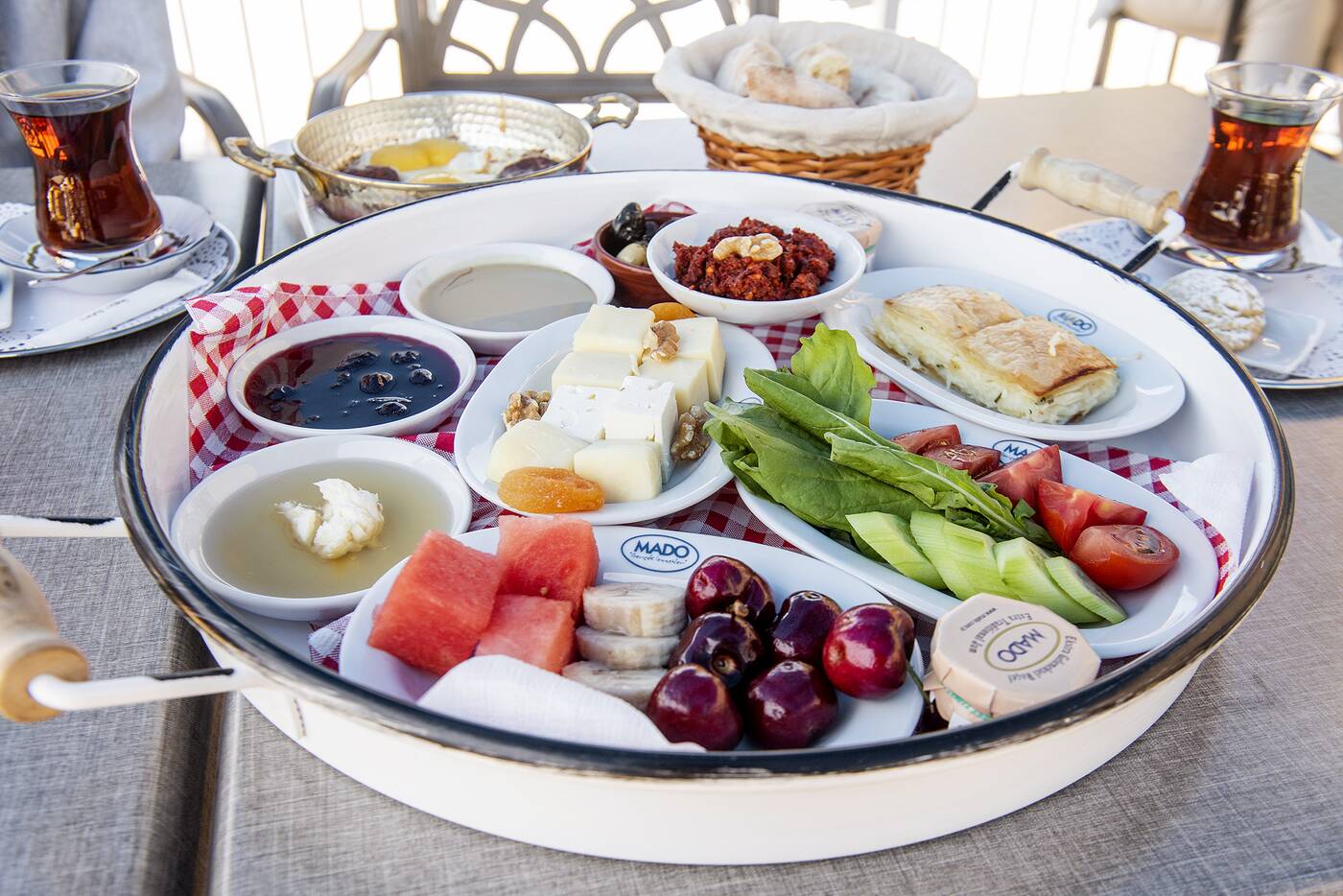 The menu extends past ice cream with options for breakfast, lunch and dinner on the menu. If you're especially hungry and hankering for some brekkie, the breakfast tray for two ($29.99) will do the trick. 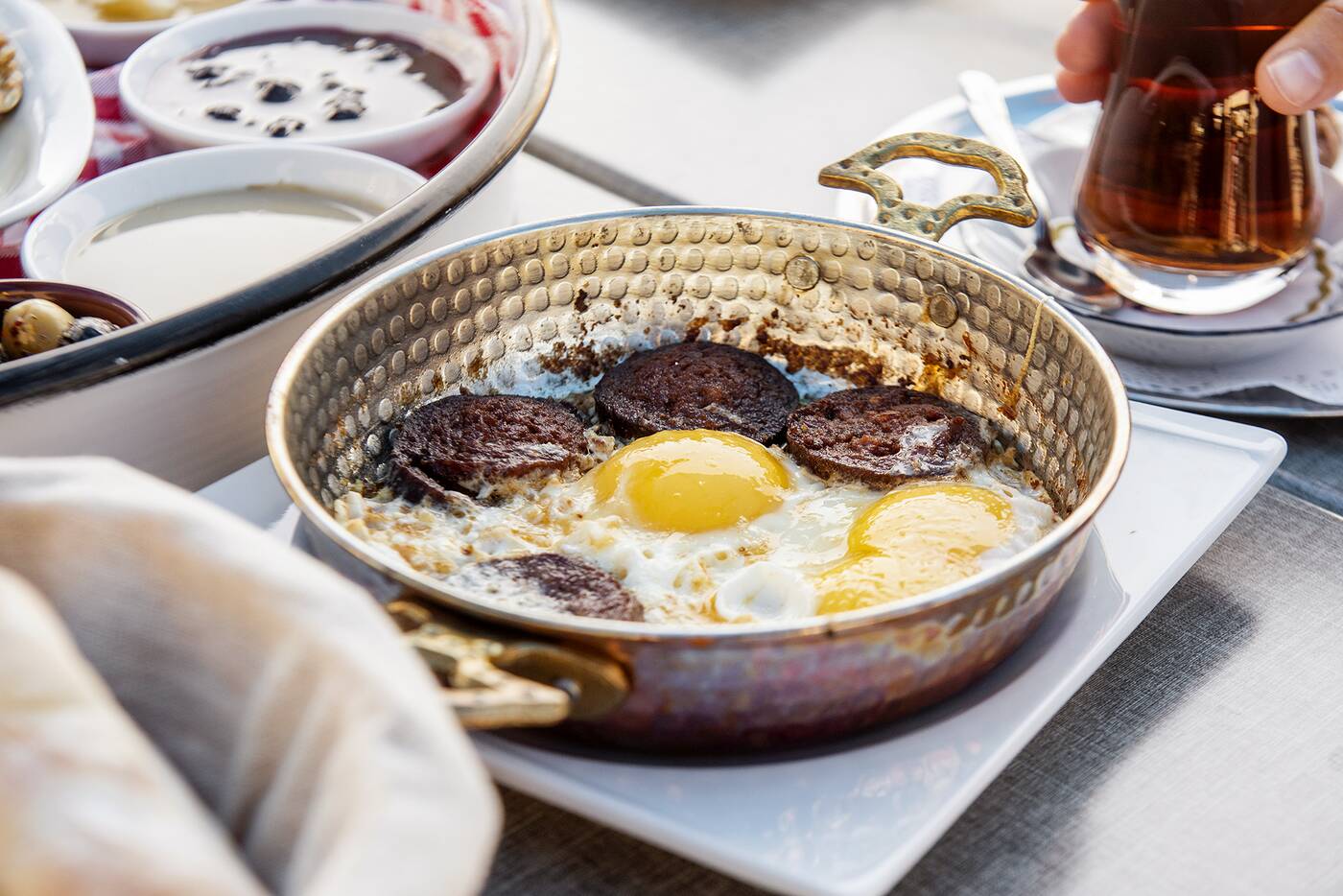 With salty cheese, jams, and olives staples of any Turkish breakfast, the massive shareable tray will get you Kashar and Tulum cheese, honey cream, tahini molasses, cherry jam, adjika sauce with tomatoes, red peppers and a mix of spices, and fried eggs with Turkish sausage. 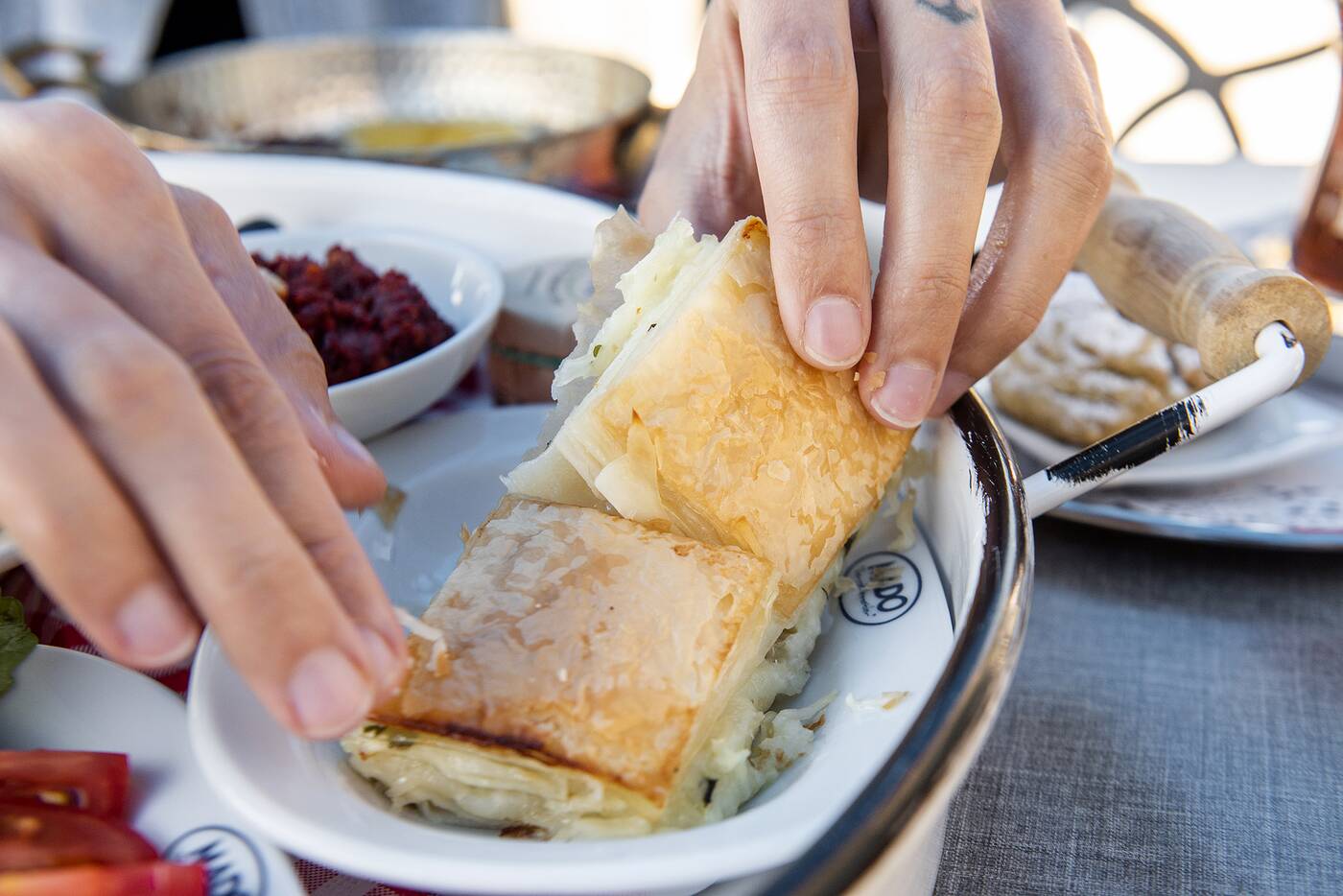 Two slices of Su borek filled with a cheesy phyllo pastry and hand-rolled fresh bread also come on the side, as well as two cups for bottomless tea to sip on in between bites. 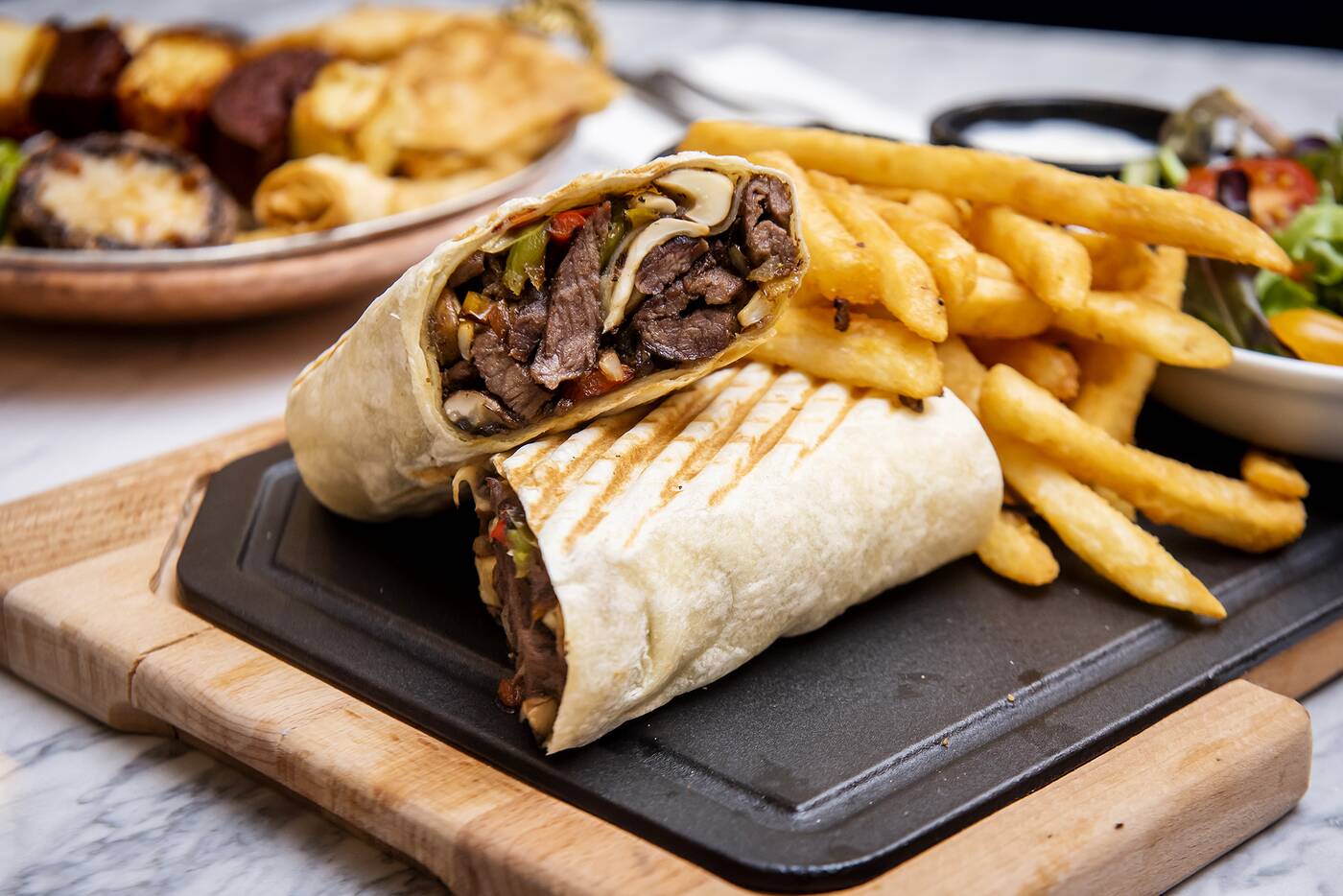 If you're more in the mood for lunch, the beef lavash ($11.99) comes with thinly-sliced and sauteed steak wrapped in a soft flatbread with onion, mushroom and a mix of peppers for plenty of flavour at a pretty reasonable price. 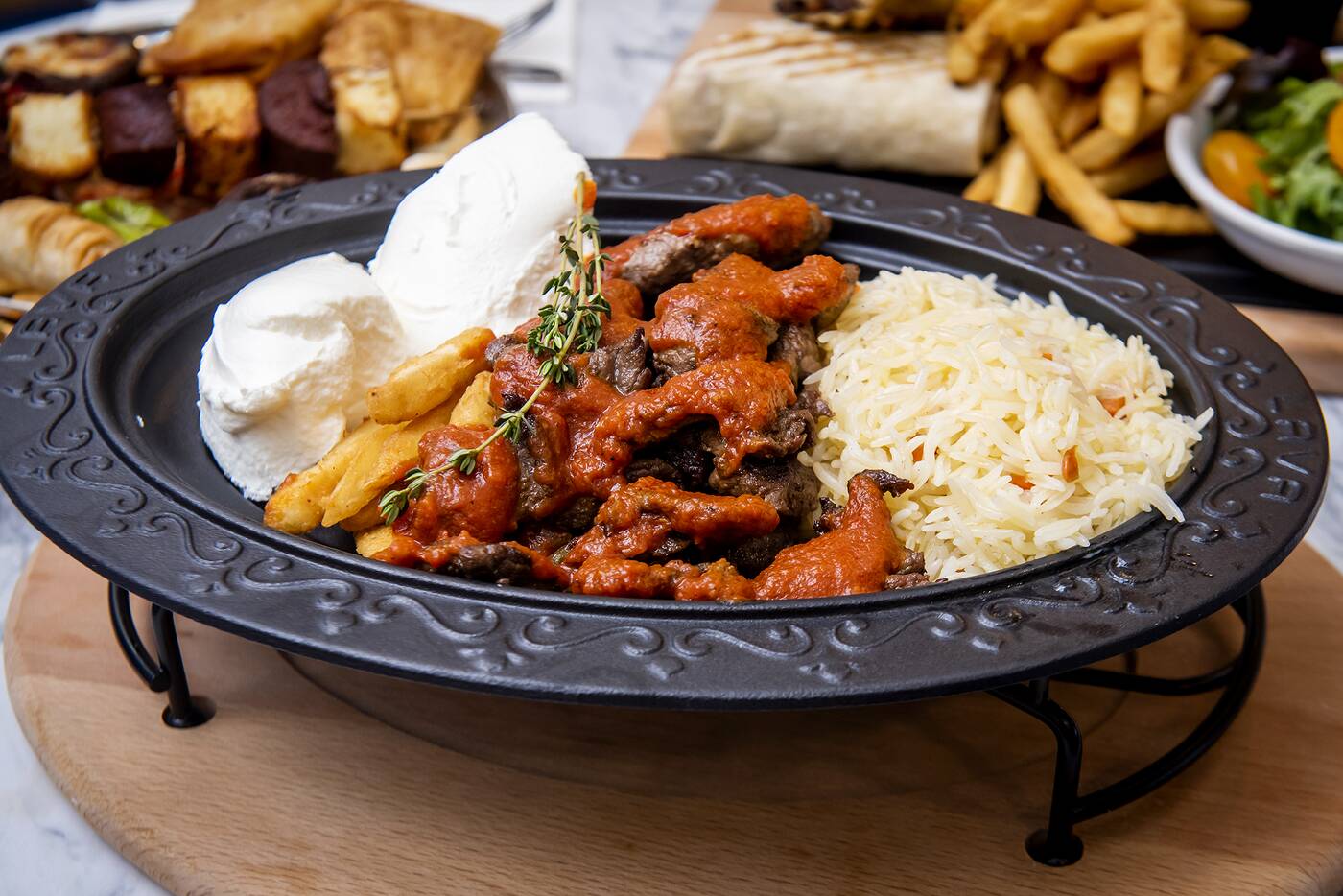 The Celtic kebab ($22.99) comes with freshly grilled slices of veal off the skewer and meatballs slathered in a rich butter-tomato sauce alongside french fries, rice and yoghurt. 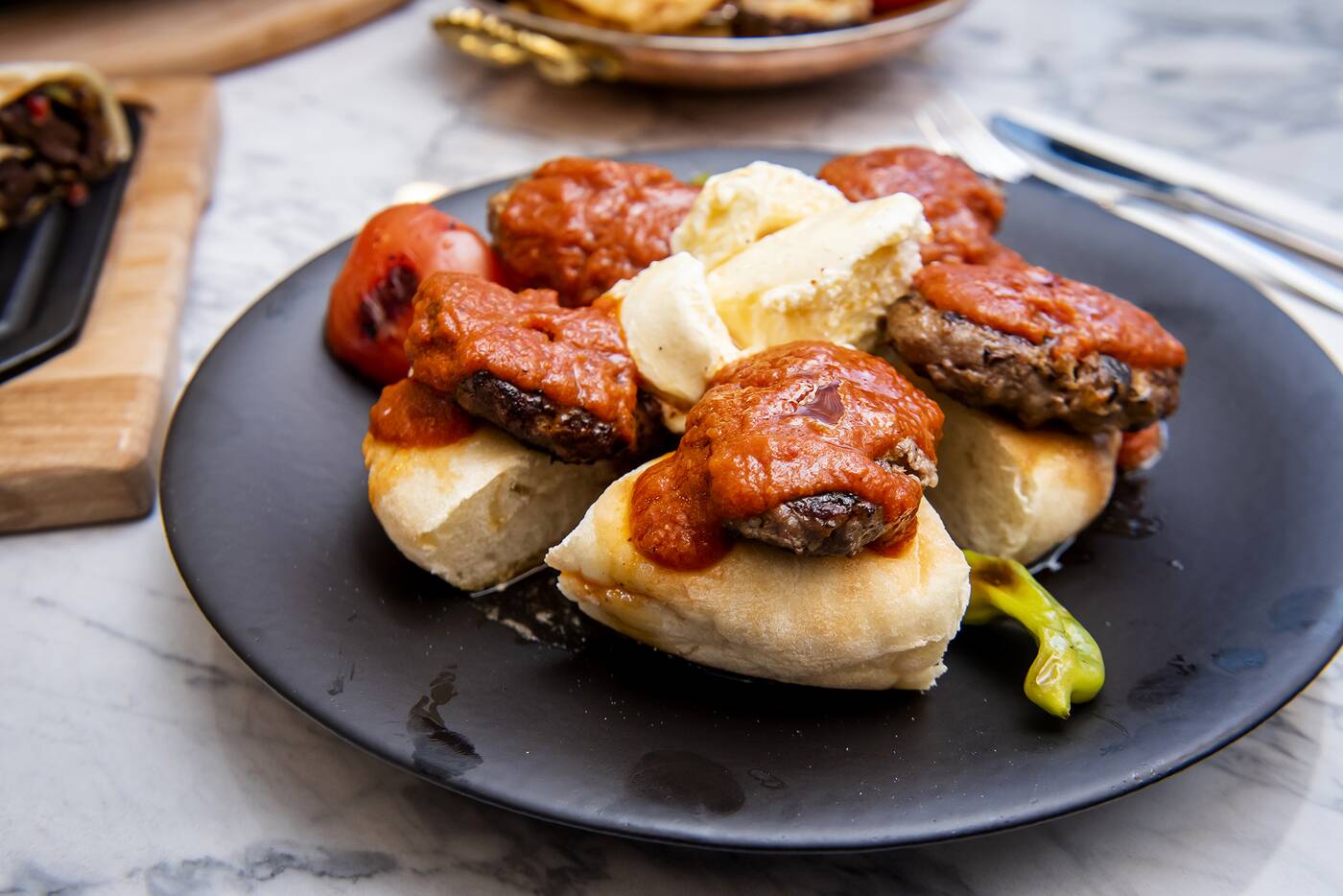 The meatballs are handmade and can also come on fluffy pieces of pide bread ($18.99) with yoghurt, tomato sauce, roasted peppers, and additional warm butter drizzled over top. 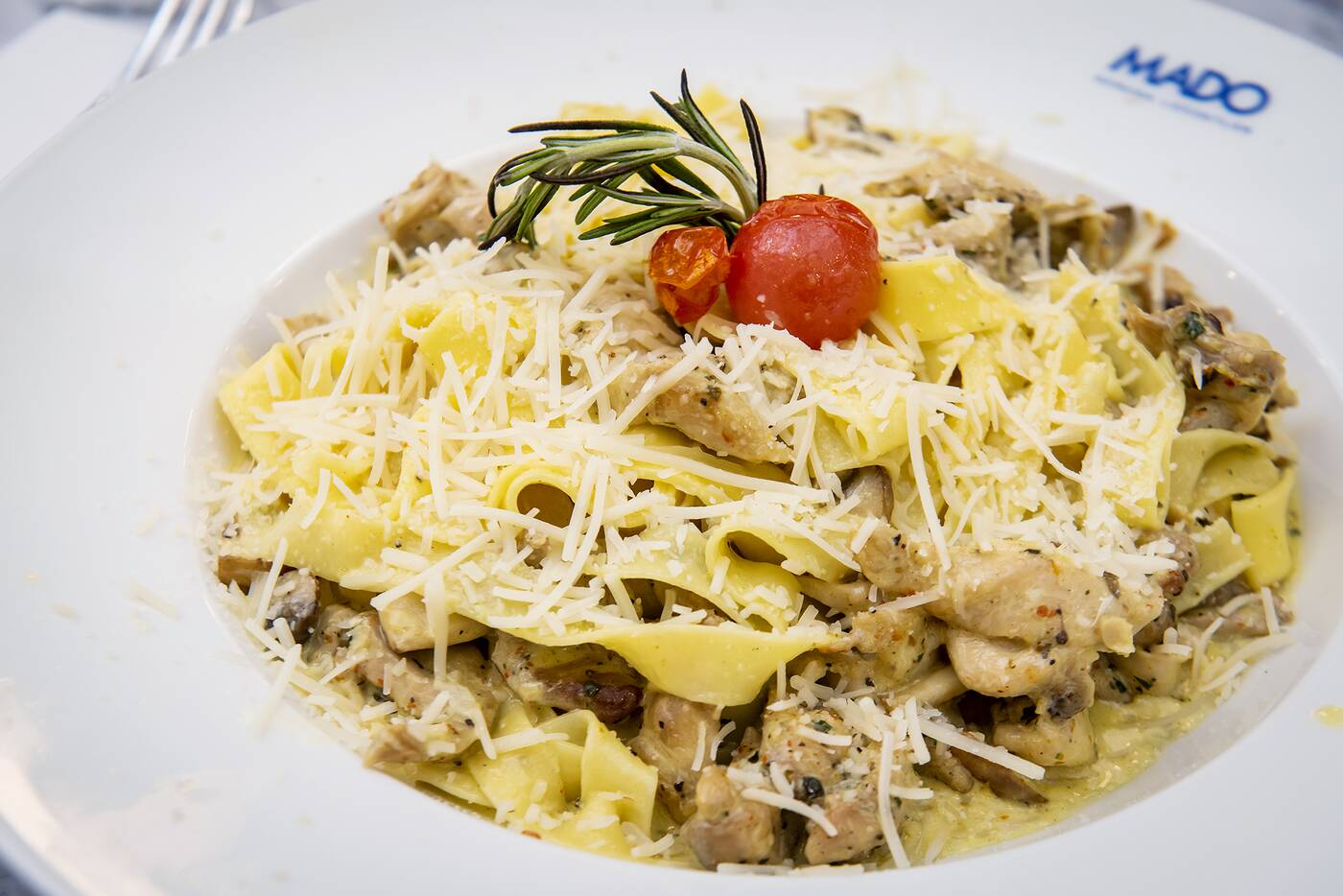 Joining the large selection of items on the menu is the fettucini. Get it with chicken ($17.99) or beef ($19.99), both come with mushrooms and a generous sprinkling of parmesan over top. 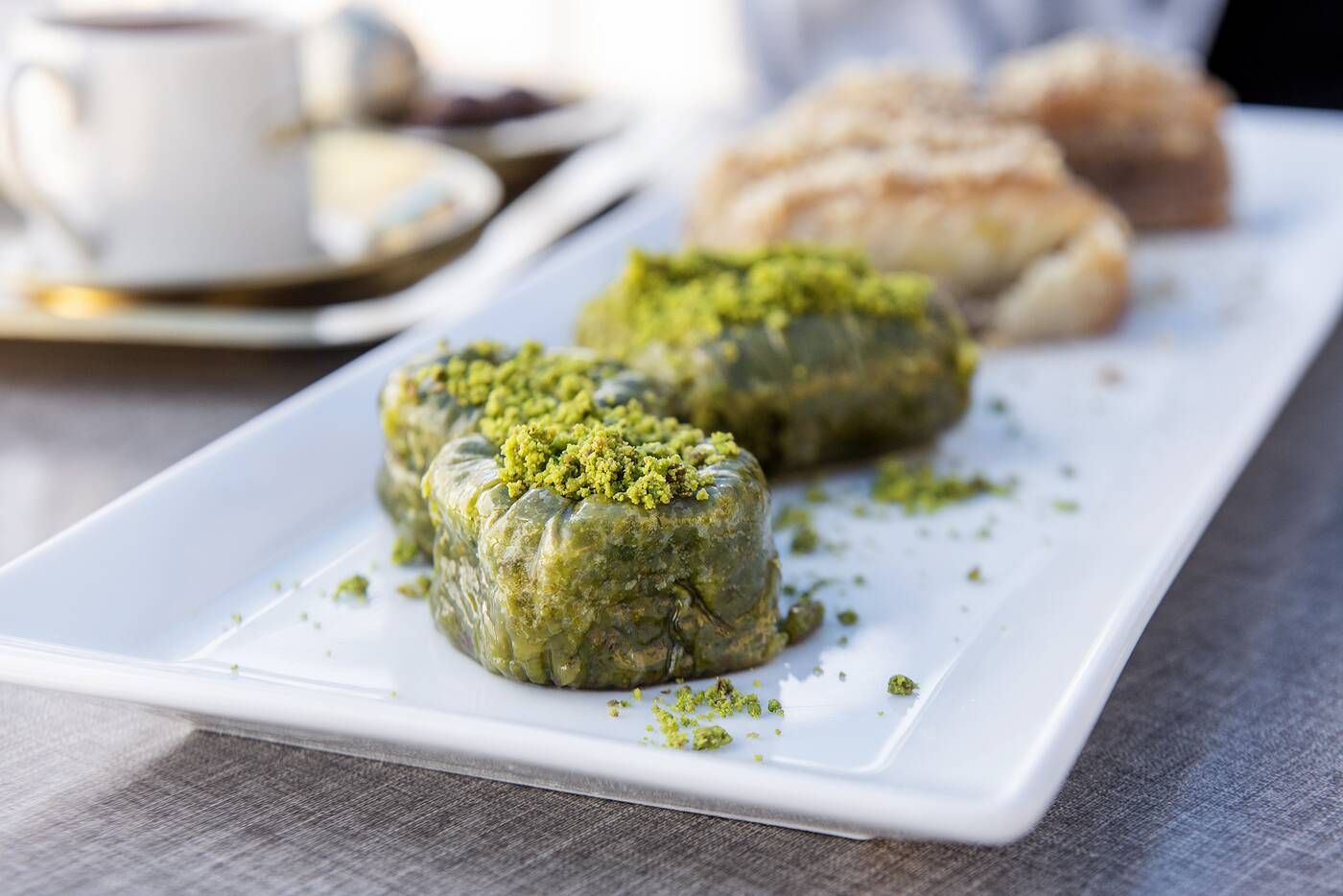 For dessert, the honey-soaked baklava behind the counter is handmade in Turkey and baked fresh in-house. You'll have your choice between varieties of walnut and pistachio like the Maraş Sarma (three pieces: $7.99). The pistachio roll has a crispy exterior giving way to a soft and creamy inside. 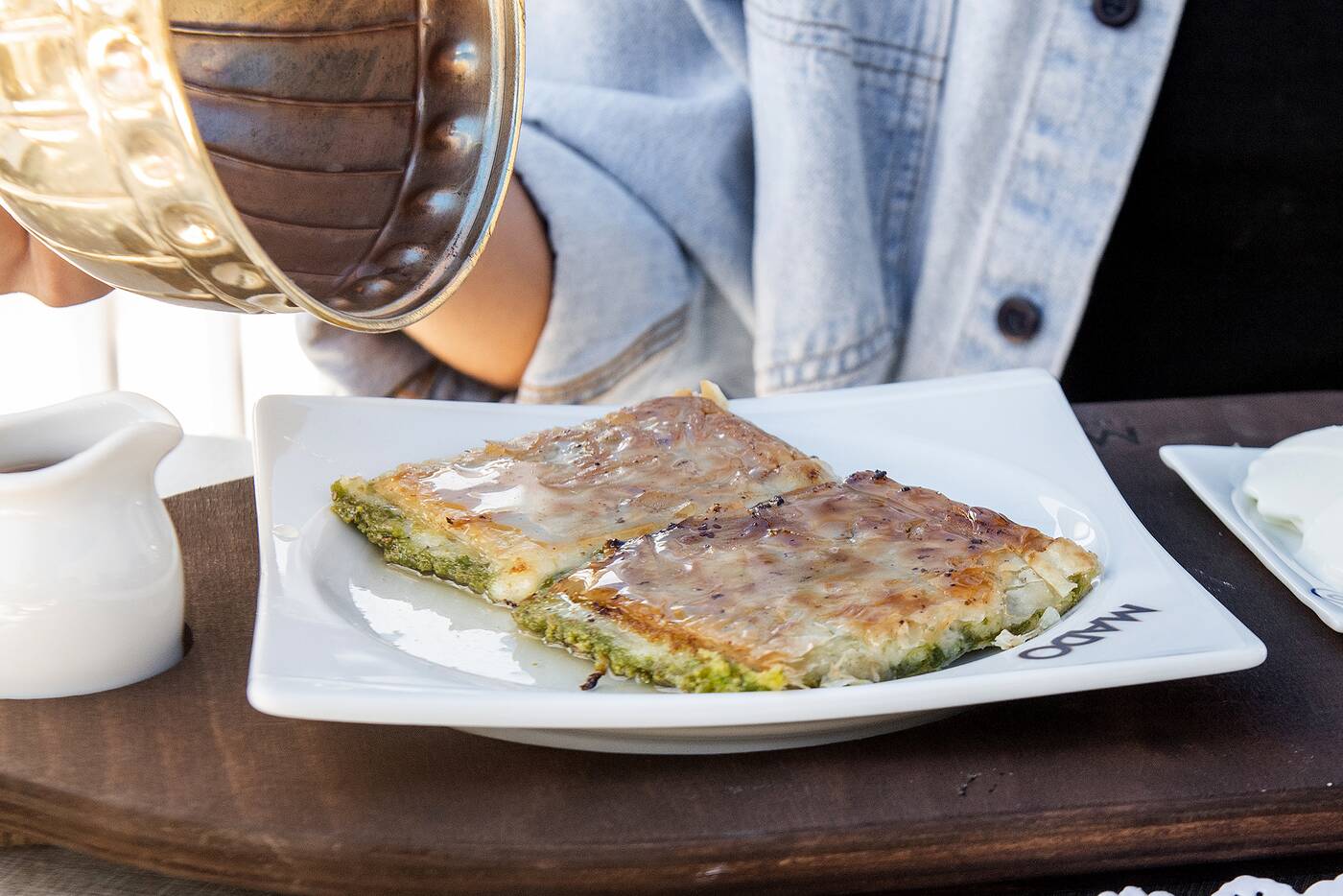 The tel kadaif ($5.99) is another dessert with plenty of pistachios. Extra honey comes on the side to pour over this sticky piece of shredded phyllo pastry. 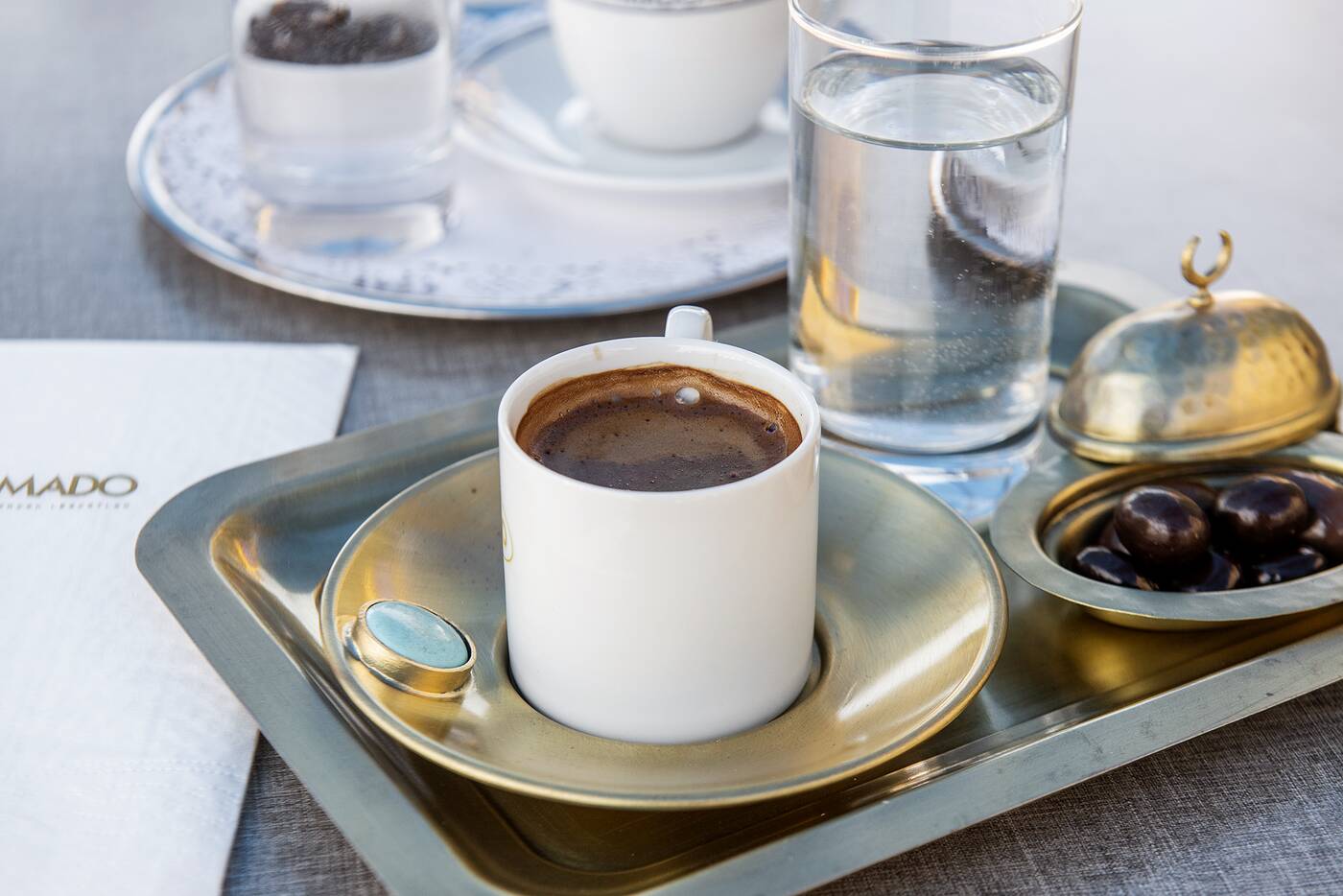 Pretty much everything on the menu is well-paired with a cup of Turkish coffee ($2.99), which is finely ground and highly caffeinated. 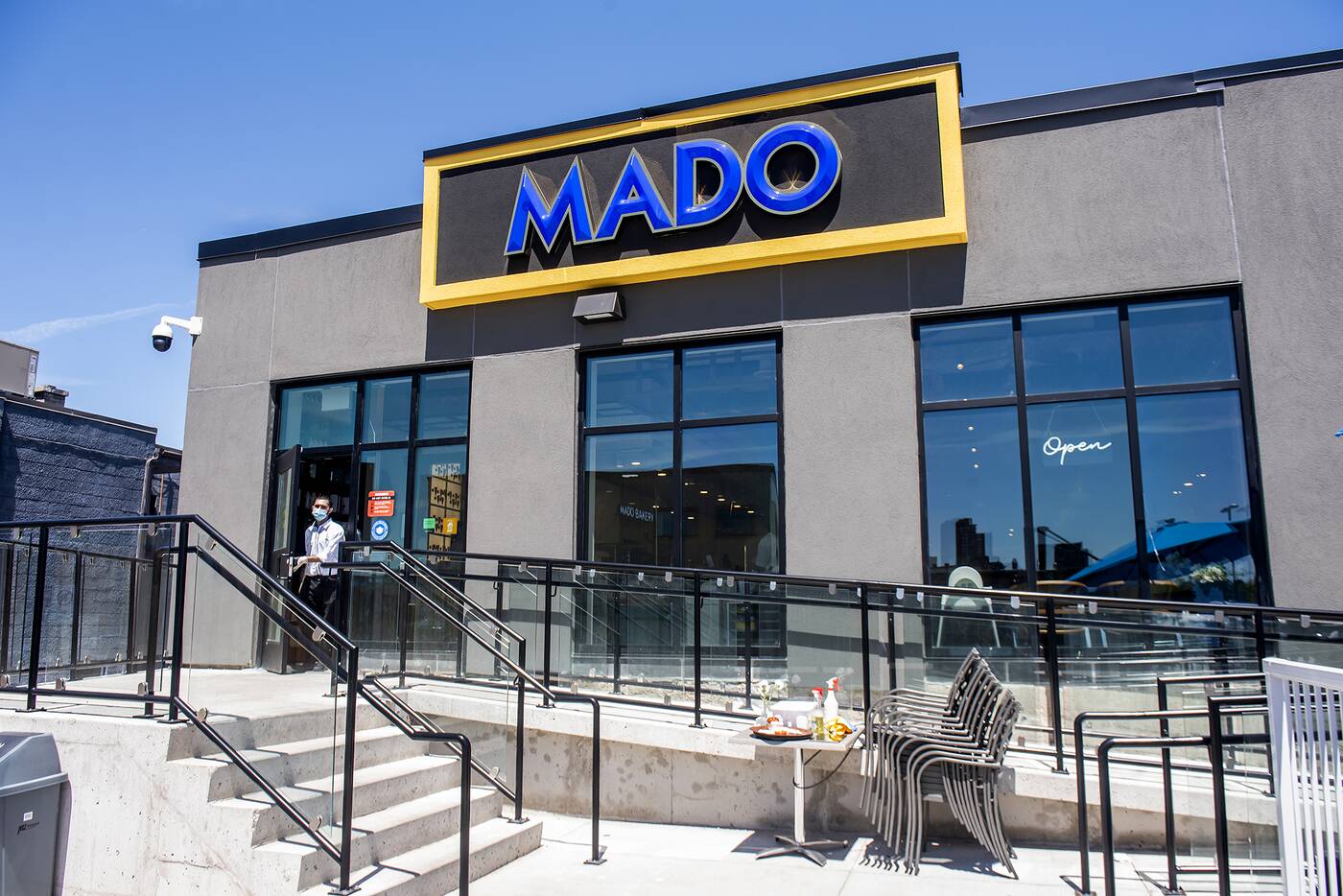 The Best New Brunch in Toronto