On Yonge, North of Eglinton, there are many restaurants but only a few to choose from if you're looking for a simple lunch. I'm not one to turn my nose up to pub food; there are a lot of pubs around the city that have elevated dining to more than frozen burgers and McCain's french fries. Both the Duke of Kent and the recently closed Rose and Crown have/had a solid menu ranging from simple pub food to more innovative Thai and Indian inspired menus.

However, there seems to be a stretch on Yonge, North of the Duke of Kent, where there appears to be only two options - Gabby's and Mad Monty's. It was an easy decision to opt for the unknown.

The weekend lunch menu was sparse, but I was encouraged to see that it featured organic steaks and meat from The Butchers across the street. Burgers seemed a bit too heavy so myself and my two lunch dates chose sandwiches and salads. I was pleased that the California Sandwich (pictured above) I wanted could be a wrap instead of being served on a bulky kaiser roll.

The sun was out and we were content to people watch on the patio while we waited for lunch. After 30 minutes we started to get antsy, and at the 45 minute mark we were ravenous, surveying the pub to see if there were any other tables that would have created a lunch rush. But there were no other tables.

In fact it took so long that the waitress confided that she didn't know what was going on in the kitchen as ours was the only order they were preparing. Nearly an hour later we finally received our meal.

The wrap itself was interestingly arranged, which must have been the reason it took so long for our lunch to arrive. It certainly wasn't because they spent extra time flavouring the food.

The 'guacamole' appeared to be simply mashed avocado. My lunch mates, knowing how critical I can be, sampled mine and were also amazed of how it was devoid of any flavour. There was no semblance of any spice from the guacamole. 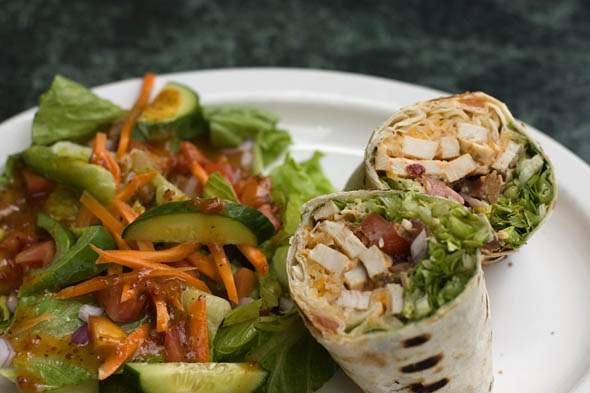 The spicy buffalo chicken wrap was a sensory explosion compared to my wrap. I immediately had order regret. Even though the chipotle mayonnaise overpowered any other flavour, at least it wasn't bland. 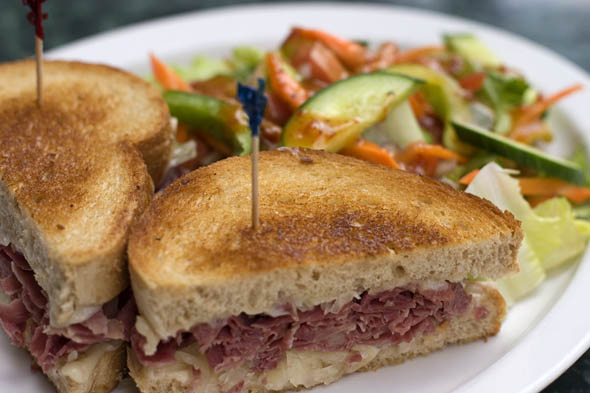 The Ruben was satisfactory. Not good enough to order again but pleasantly filling.

I've heard that Monty's has decent wings but I doubt I'll be back. I'd be too worried about how long it would take to deep fry the wings and pour sauce on them.