On an appropriately grey Parisian day, we head to Le Paradis to see what all the fuss is about. Luckily, we arrive early enough to be the first ones there and settle at the front of the house. Despite it being a damp Monday evening, Le Paradis fills up quickly and many are left waiting for a table.

A closely guarded neighbourhood secret, patrons exchange familiar nods and are welcomed by staff on a first name basis. We, on the other hand, seem to be the only outsiders. Our server is competent, but the friendliness is forced and we can't seem to shake off the feeling that we are not very welcomed here. Perhaps our reluctance to order wine with our meal is marking us as the odd ones out at this exclusive block party?

The ambiance is charming, but the dining room is dated with its cliche black and white posters, checkered linoleum floor and a painted seascape mural in the back room (an ode to the owner's Southern French roots). The open concept kitchen is inviting, as is the bar where many patrons who are unable to get a table dine. Le Paradis certainly captures the sort of casual allure of Parisian bistros, but disappoints in food and service.

Their prices are quite reasonable with most mains ranging from $14- $17, along with a changing three course menu at $20. To start off, I order the white bean and basil soup ($4). What arrives instead is lukewarm water with a medley of diced carrots, celery, beans and dried basil. I grow increasingly skeptical of a restaurant that avoids fresh herbs, particularly when it is headlining the dish. The Rustique salad ($6) is not much better. The overpowering garlic dressing drowns the wilted frisĂŠ salad, while the fried lardon bacon is rock hard, as are the whole wheat croutons. 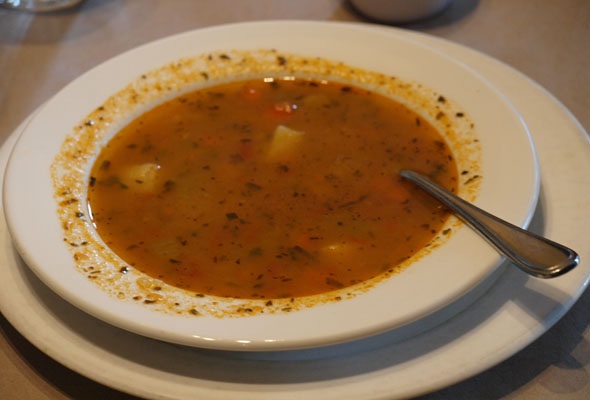 Our mains are met with more success. The steak in peppercorn sauce ($17) albeit on the smaller side, is tender and well seasoned. The duck breast ($17) with its pink meaty center scrumptiously contrasts the crispy skin. The cherry-kirsch sauce, however, is too sweet and lacks the complexity of superior liqueur based sauces. The frites are delightfully crunchy and the green beans are crisp, though the portions are rather stingy. 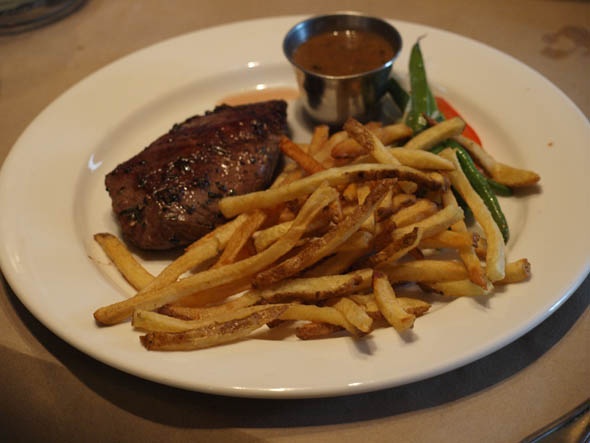 With many restaurants offering competitive set menus at around the twenty-dollar mark, I'm not completely convinced that Le Paradis is a real bargain.

To the further dismay of our server, we skip out on dessert. At this point, we are unable to redeem ourselves and leave on a low note. As we walk out, the ambiance inside is increasingly convivial and many more couples file through the front door. We are left in a daze, feeling as if we missed out on something. 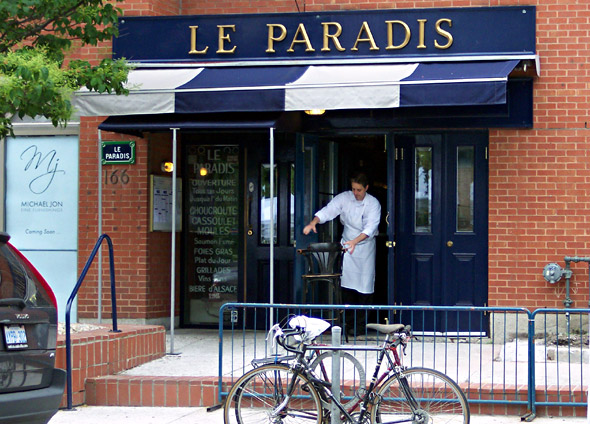