Lansdowne Brewery has been a long time coming , but it's finally here. This brewpub beside Xpace can be found on a not-too-happening stretch of Lansdowne between College and Dundas West, occupying what was last the Vietnamese restaurant White Lotus a few years back. It looks fairly unassuming on the outside, save the bar's logo on one of the doors. 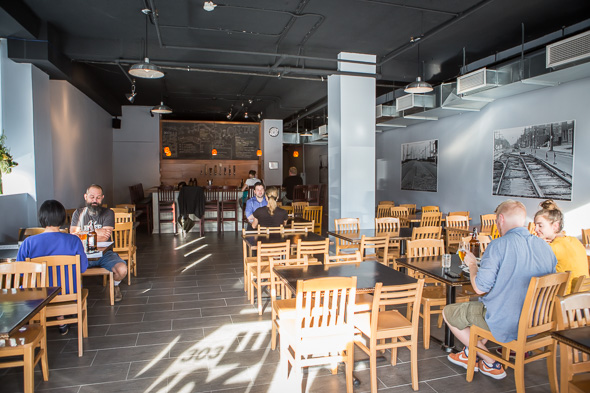 Inside, it's equally barebones in decor and almost warehouse like, with exposed ceilings and pipes. Blown-up black-and-white images from the Toronto Archives of the outside intersection line one wall. Since this building was originally a candy factory (the floors above have been converted into lofts), it's got the bones to hold a microbrewery. 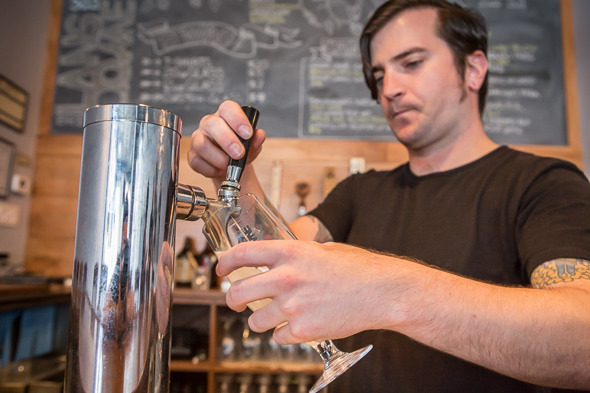 Unsurprisingly, a team of beer aficionados are behind this project; first-time owners Jeremy Coghill, who's been in the craft brew scene for the past 20 years or so, and Darrin Earley (who was just more of an appreciative drinker than a brewer before this) have recruited Peter Campagna, also a certified cicerone (the beer equivalent of a sommelier), as executive chef.

They tell me they're still working on getting the brewing space in the back going (they're waiting on the manufacturer's license), which has a similar setup to Bellwoods Brewery . With any luck, this place should be offering their own craft brews by the fall. 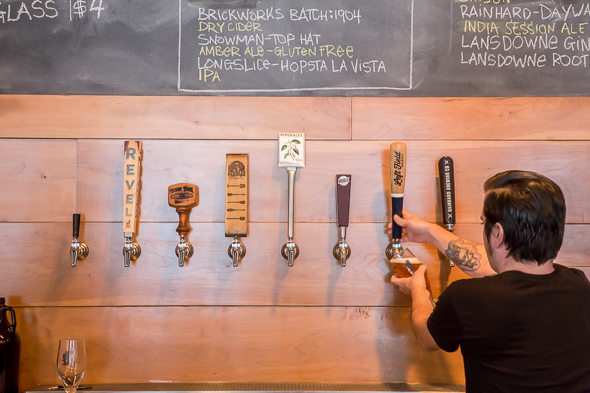 For now, there is a constantly changing selection of Ontario microbrews on tap from newer brewers (many former homebrewers) like London's Forked River , 5 Paddles from Whitby, Garden Brewers and Revel Cider , both from Hamilton, and locals Left Field , Muddy York , Rainhard and Clifford . All full 20oz pints are $8 (tax in), as are all cans (no bottles).

When a keg of one kind of beer runs out - like when Garden's Petal-Pusher elderflower lager sold out on opening night - the tap is usually replaced with a different kind of beer. Craft brewers bring three to four different kegs each time, Earley tells me. "We want to keep everything as local and as fresh as possible here." 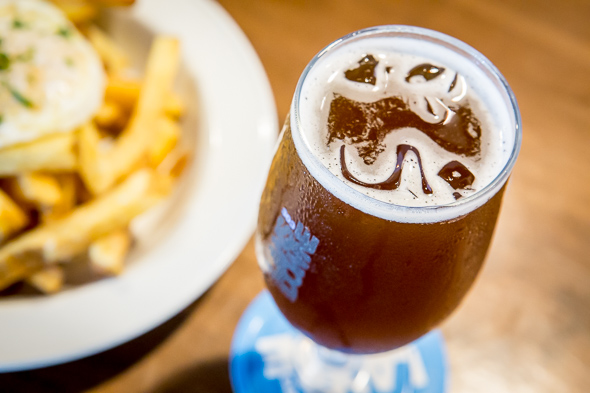 Although they can't brew their own beers yet, the guys are making their own all-natural, non-alcoholic root beer and ginger ale that's sold on tap ($3.50/small, $5/pint). Both have pleasant root beer-y and ginger ale-y aromas and flavours; the root beer is "all root and no extract," says Coghill, and the ginger ale is refreshing on a hot summer's day.

If these are any indication of what their beers will be like, then I'm looking forward to returning to try them.

As for the food, Campagna has crafted a menu that's just as fun to sample as the drinks. There are snacks and entrees that can be paired with the beers available by front-of-house staff Deaglan Kernohan-Wallingford (who's also a homebrewer). 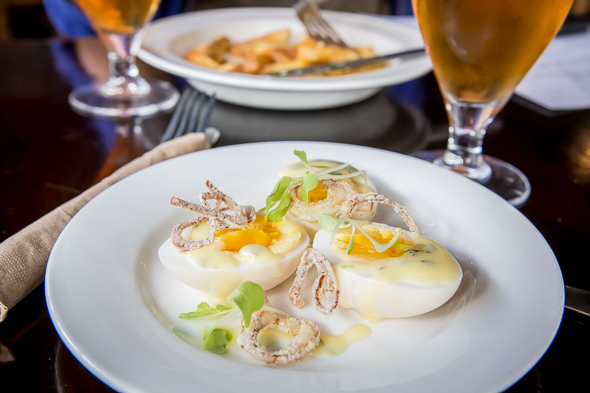 Pickled eggs ($4.50) come as three lightly pickled half-eggs topped with a Bearnaise sauce and crispy shallots. They have just the right amount of salt, crunch and vinegar to them to pair well with Left Field's Sunlight Park Saison, which is light and fruity with a little spice. 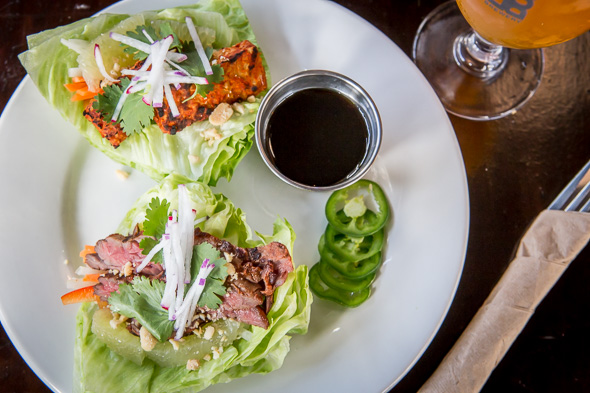 Asian-inspired lettuce wraps come in two varieties: tempeh ($2.50) with spicy gochujang and ponzu sauce or strips of medium-rare steak ($4). Both are come with pomelo, daikon, carrot, cilantro and peanuts, making for flavourful and crunchy bites. They're paired with Clifford's Pinball Wizard APA, its clean bitterness helpfully cutting into the spiciness of the dish. 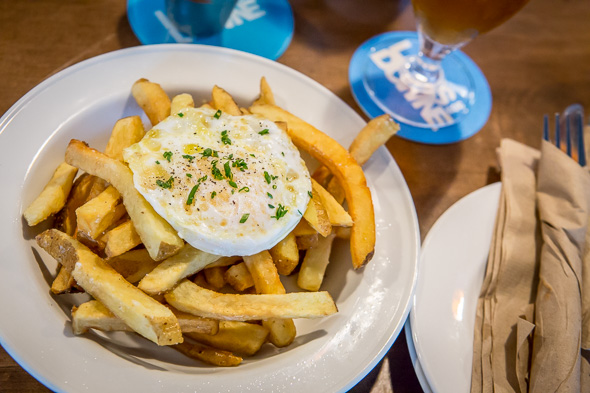 A plate of French fries ($5) comes with a garlic and black pepper aioli, but we get ours with a runny duck egg on top (+$2.50). The crisp fries combined with the yolk and whites, and the tart and spicy hot sauce Coghill makes from habaneros really hit the spot. Rainhard's Day Walker India Session Ale's citrusy hoppiness helps as well. 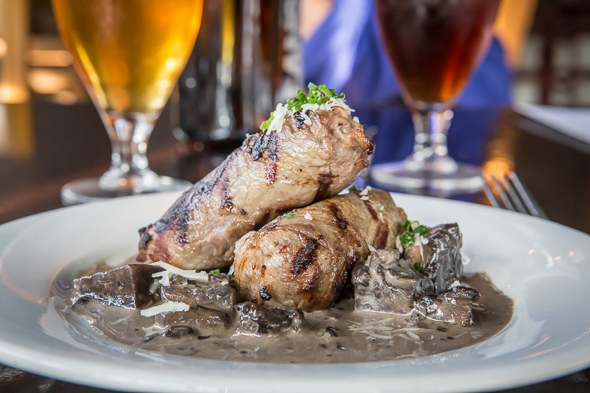 Finally, we try the involtini ($15), a grilled ribeye wrapped pork shoulder in a portobello mushroom cream sauce topped with a bit of Asiago cheese. This is a meat-lover's comfort food dream, and so is the beer Kernohan-Wallingford pairs with the entree.

He tells me Garden's Piperales Smoked Amber Ale is more of a risky pairing, but it turns out it's my fave beer of the night; it's brewed with crushed black peppercorns, which you can definitely taste, and its smoky flavour goes perfectly with the meat and creamy mushroom sauce. 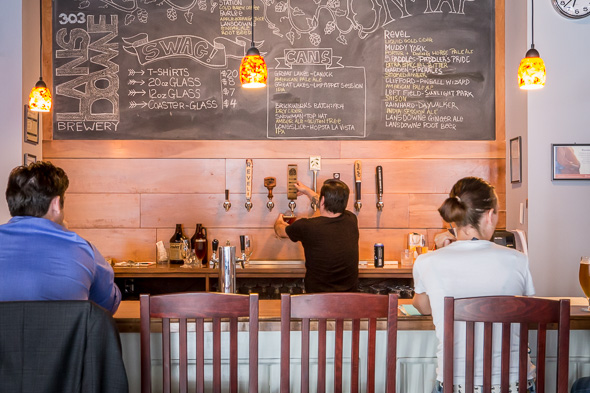 Coghill and Earley tell me they wanted to open in this area because it's an up-and-coming neighbourhood with an arts community that will be interested in a place that's a little different from the rest. I hope they're right. 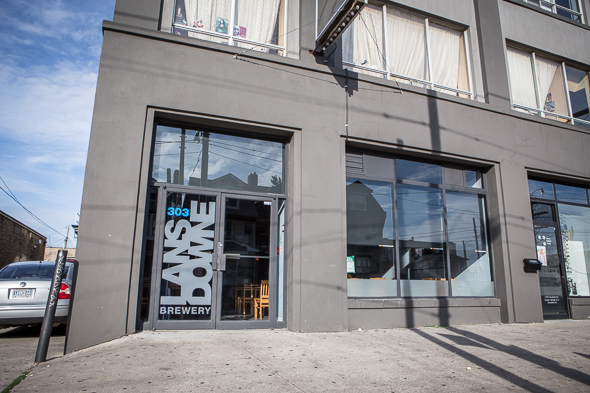