Korean Cowboy opened two months ago in the space formerly occupied by the sports bar Main Event at Yonge and Eglinton, and based on its quirky name alone my interest is piqued. Sam Lee and Janet Yun, the husband-and-wife team behind Bi Bim Bap , decided they wanted to open a Korean-style bar that would focus on anju, tapas-like snacks that are meant to be shared amongst friends while drinking.

The place has a vaguely saloon-ish/sports-bar feel (there are TV screens aplenty), and the main-floor space seats about 70, spread amongst bar seating, booths and tables. There's also an upstairs area meant for private events that can accommodate up to 30 people. Lee believes this might be the largest Korean bar/pub in the city. 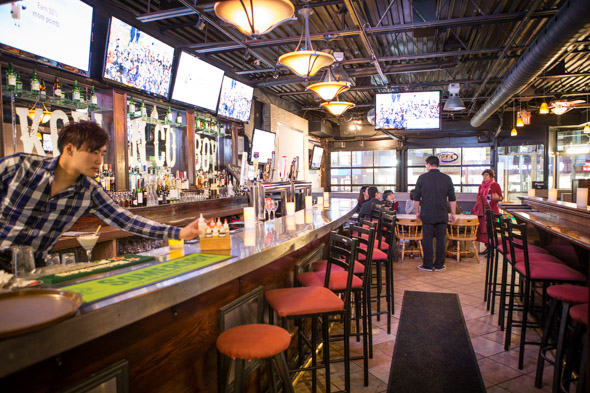 He describes the anju they make as "kooky," and if you read the menu, items like "mocha pork belly" (pork belly infused with coffee and cocoa to remove its game-y flavour, $4.99), "sawdust chicken" (stir-fried chicken rolled in Panko and roasted garlic flakes, $5.99) and "squid and pear" (boiled and sliced squid served on a bed of julienned Asian pear with sesame seeds, sesame oil and chopped green onions served cold, $5.99) confirm this. 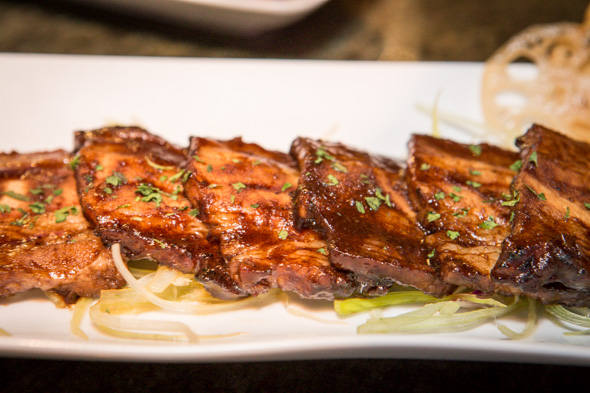 Both he and his wife experimented a lot with different combinations; Yun is the expert on Korean cooking and Lee enjoys coming up with ways to put Western twists on dishes. Of these innovative eats, one of my personal faves is the green-tea-infused pork ($4.99). The actual flavour of the dish doesn't really match the description on the menu (I expect matcha-flavoured pork).

Lee explains the purpose of the green tea is mostly to remove the game-y taste of the meat; the pork is then stir-fried with vegetables in a spicy sauce and served with round, thin slices of pickled white radish that are meant to be used as shells for the meat. The end result is a pleasing combo of spicy, salty and acidic that goes perfectly with alcohol. 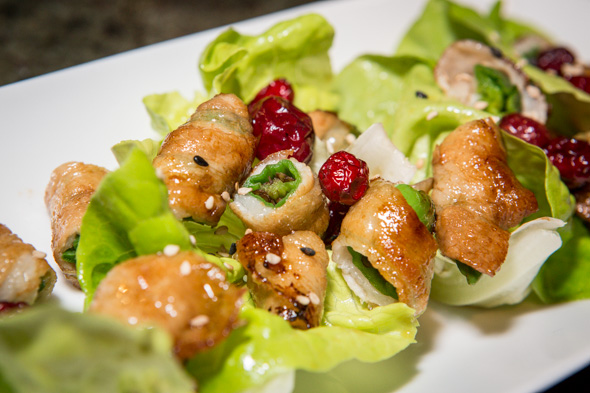 Another fave of mine is the pork belly pepper, a dish of green chili peppers wrapped in thin slices of pork belly with a sprinkling of sweetened cranberries ($3.99). It's spicy, fat, sweet and totally addictive. 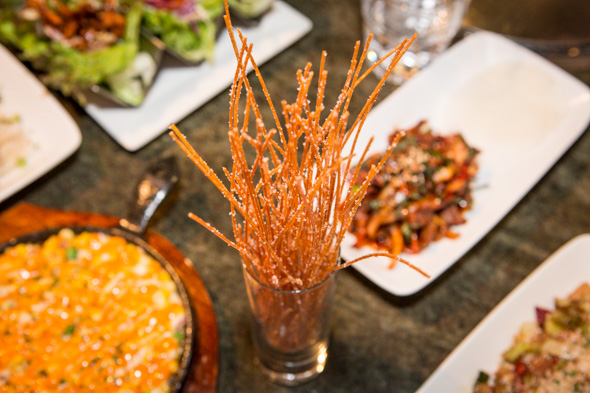 There are also some dishes that should already be familiar to fans of Korean fusion, like fried spaghetti ($1), an appetizer of fried spaghetti sticks sprinkled with salt and sugar; skillet corn ($4.99), a satisfying mixture of corn, butter, cheese and parsley; and kimchi fries ($4.99), a carryover from Bi Bim Bap, with house-made kimchi, Korean BBQ sauce, vegan sesame mayo (made with tofu) and green onions over julienned fries. 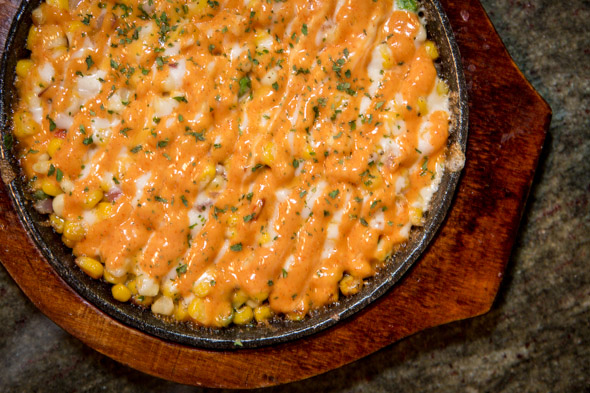 Most of the anju is priced between $4 and $6, to encourage sampling and sharing amongst a group. For more substantial appetites, there are pre-assembled ssam (lettuce wraps) or tacos (soft shells), with fillings that include Korean beef, whelk (Lee likes to call it "Korean escargot"), spicy pork or chicken (three for $8.99 or mixed for $10.99). 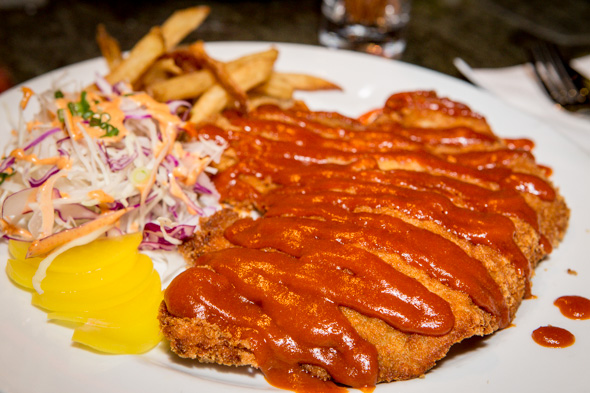 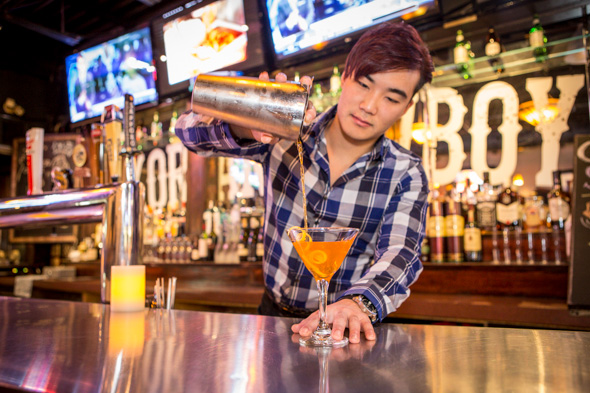 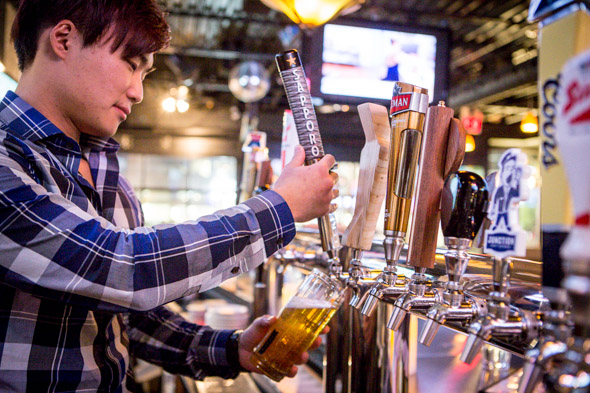 Lee and Yun have specials Sunday to Wednesday, with wing and oyster nights (house-made sauces have names like XX-HOT and Tomorrow's Regret), pork-bone-soup Mondays and cheap drinks. As you could probably tell by the name of the bar, this is a pretty fun place to be. 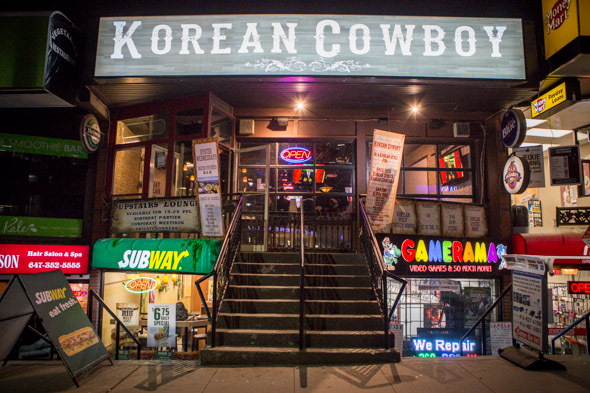