For me Jalapeno was one of those places you keep riding past on the streetcar, vaguely wondering what it's like. After a few years of that (I'm all about the quick turnaround time), I decided to go check it out.

First, drinks. Mine was a Paloma (silver tequila, grapefruit juice, lime juice and soda; $5.95). Which was both huge and delicious. I'm biased (I love tequila), but both of my dining buddies also agreed it was a lip smacker. 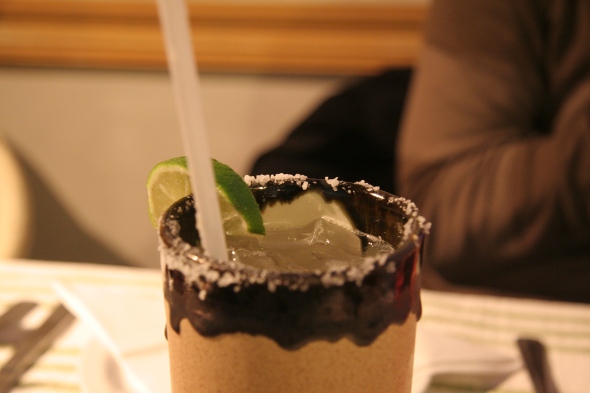 Though they also both went with beer: Negra Modelos (same brewer as Corona, but less widely available). A really nice lager that proves it's often worth getting whatever "other" beer a restaurant has available. 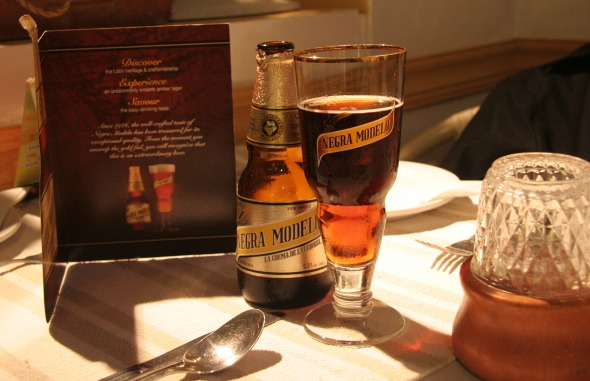 The complimentary starter munchies are pictured below. Including tortilla chips: 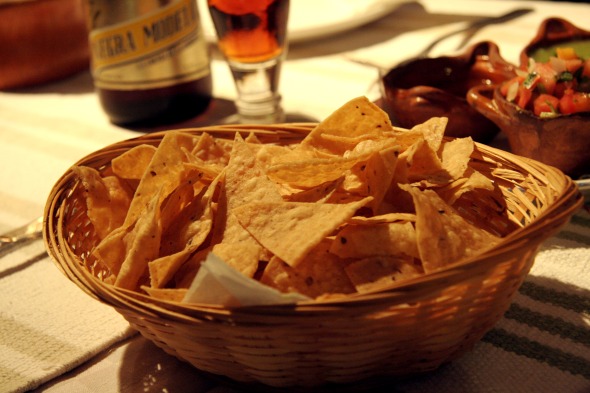 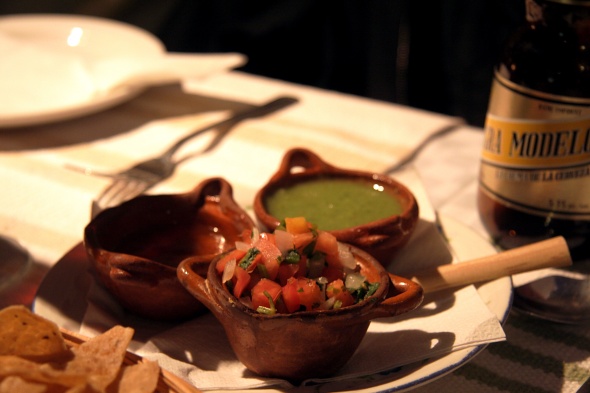 Being starving, and needing more liner to cushion the beer and tequila, we started with Mexican Canapes. A medley of taquitos, chicken sopes, pork panucho and gordita and more ($10.95). In summary: fried stuff with meat and cheese. A winning combination in any food culture. 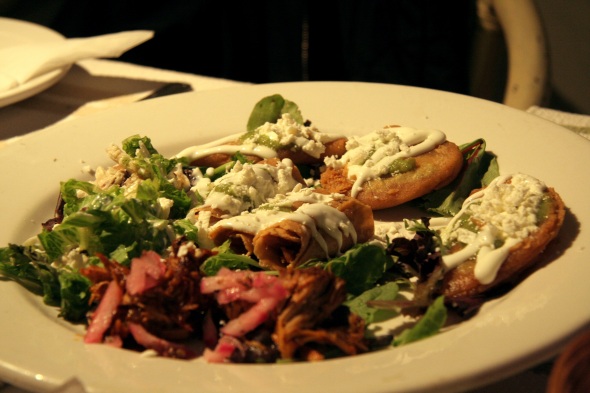 A few of the canape dishes I'd first tried at Mexitaco , where they had been downright bland/bad. So it was a pleasant surprise to see they'd been misrepresented, and are actually very tasty.

Bolstered by fried stuff'n'cheese, we chose our mains. Warning: reading the menu in its current typeface is a bit of a challenge. The font is a swirling gothic explosion, so we played a bit of mix'n'match. "Okay, I know this says 'Chile' so this is a 'C', which would make that also a 'C'. And that's a... 'P'? Is that a 'P' or a 'Q'? It might be an 'F'...". (fyi, the menu is available online in a much more legible sans serif if you prefer to plan ahead). 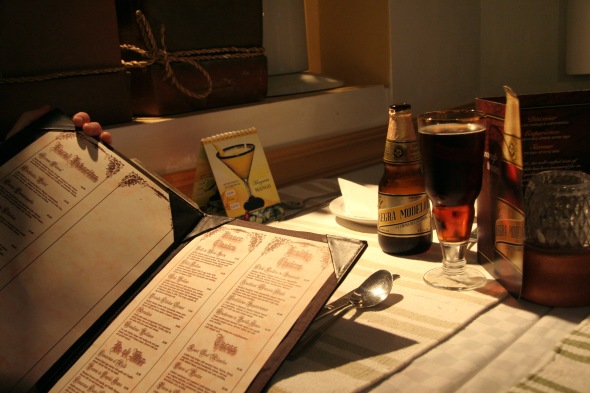 We ended up choosing one Pollo en Mole Verde ("grilled chicken breast in green mole made of pumpkin seeds and selected Mexican spices"; $17.45): 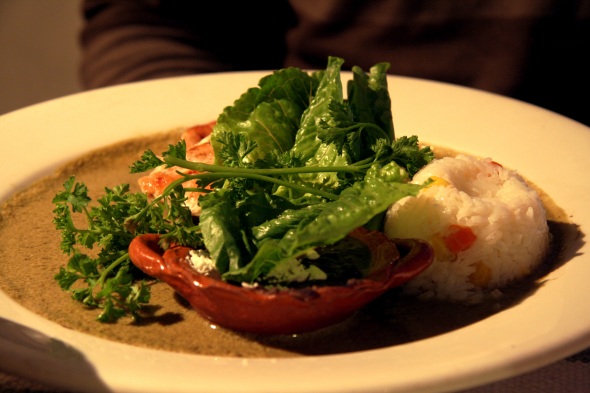 A Mole Poblano ("the most traditional dish from Puebla, Mexico. Nuns from Santa Rosa Convent created this masterpiece of Mexican Cuisine in 1680"; $18.45): 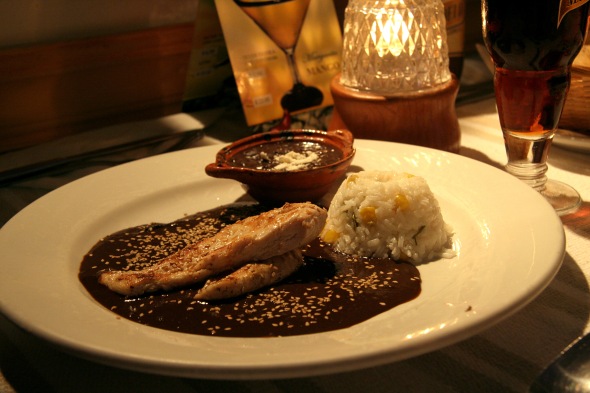 Being the heathen I am, I just can't bring myself to choose anything affiliated or pertaining to nuns. So I chose some oft-religiously-blacklisted pork: the Cochinita Pibil ("shredded pork marinated in Mayan condiments"; $16.95), a slow-roasted warm and deeply flavourful pork dish which is just damned tasty. Especially when eaten with a pile of red onion. Both of my dinner companions enjoyed their dishes, though I definitely pwned them on ordering. Suckers. 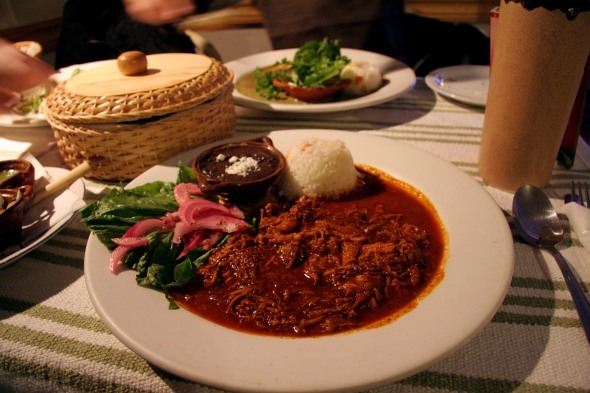 Though as you can see from the blurring hands in the background, they got to go ahead and eat while I was delayed taking a photo.

The corn tortillas served with our dishes: 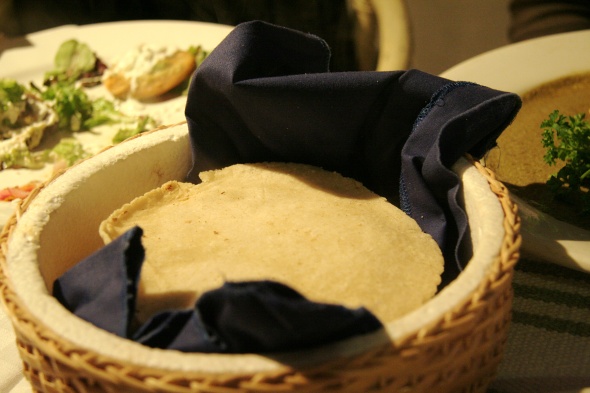 My friend Maquino (who had the Pollo en Mole Verde) had been talked that night into re-trying Jalapeno. Apparently he had not enjoyed a previous dinner there, when he'd ordered something more run-of-the-mill. "Nothing special". But I think that's the key to getting it right at Jalapeno.

It seems like you have to choose something special for it to be special. Picking off of the "Local Favourites" or "Dinner Classics" instead of Tacos or Quesadillas. Get something you haven't had before, or wouldn't default to getting, and you'll probably be pleasantly surprised. (Maquino was. At the end of the meal he officially retracted his earlier disinterest, and replaced it with solid approval.)

Even though we were stuffed, one of us had to at least try to fit in some dessert. Maquino stepped up and selflessly ordered the Banana al Tequila ("Banana fried in butter and brown sugar with tequila sauce"; $4.95) 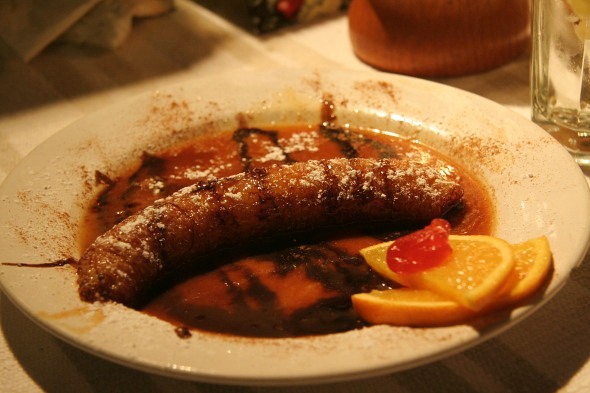 And I couldn't have nothing, so I ordered the Mexican coffee ("Brew of coffee, cinnamon stick, orange peel and brown sugar"; $2.75). Man, alive. If I had known about this, it would have shot straight onto my list of Ten Great Hot Drinks . It's pretty gorgeous. They're not messing around with the sugar though. Sweetacular. 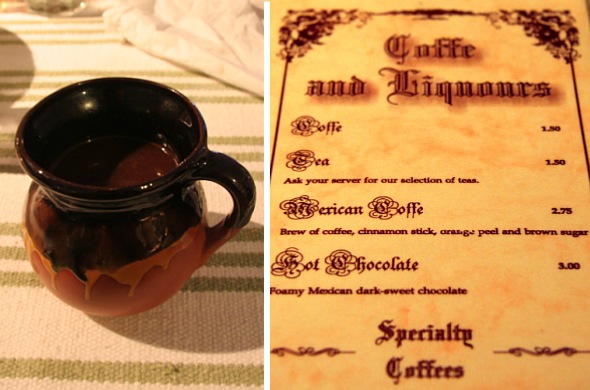 Bottoming out around $15 for a main, Jalapeno is not a cheap date, but it has some genuinely delicious dishes on the menu. And a good place to go if Toronto's Big Burrito Rush of 2008 has whet your appetite for less familiar, but just as deserving, Mexican dishes. 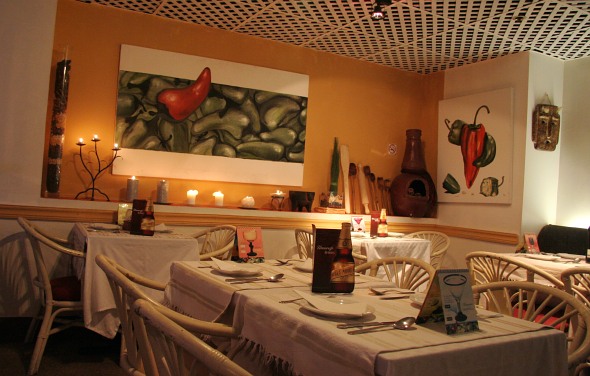 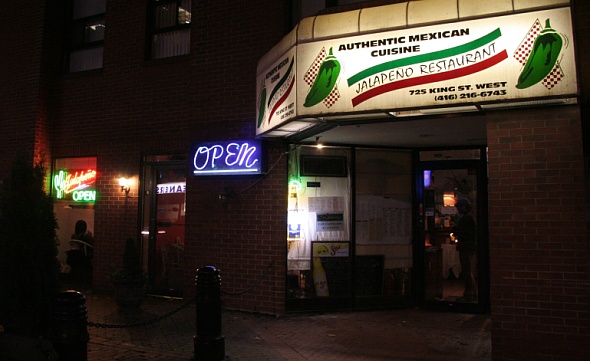