Irish Potato Nachos sounds like a culturally confused picnic lunch family dish, but it's actually a pretty decent meal you can get on the run downtown.

We stumble into the little take-out spot that's been open just two weeks on Church south of Dundas. Outside it's not much and inside, well, it's not really much either. Bright yellow walls, a fridge, a counter, and two chairs by the window. Granted, the place has just opened, and the owner still plans to decorate, according to the friendly girl at the cash. 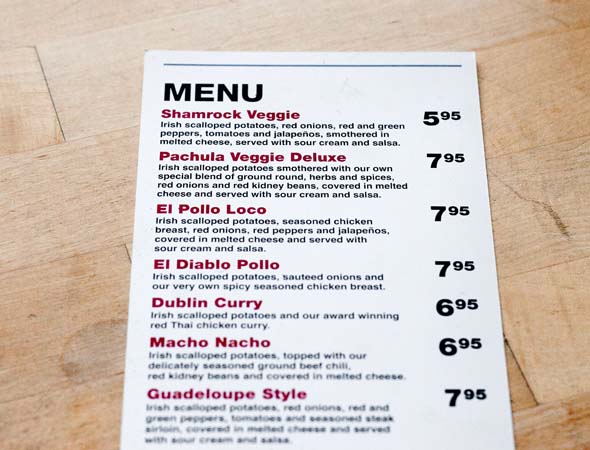 I scour the menu, still sort of unclear as to what I'm actually ordering. "It's basically nachos," she tells me. "But instead of chips, we use scalloped potatoes." I assume, then, I'll be getting a slightly modified form of greasy bar food and opt for the Shamrock Veggie ($5.95) as to not enrage the slightly upset stomach I woke up with earlier that day.

As my order is being prepared, the owner comes out from the kitchen and strikes up a conversation as he leans against the counter. I learn that he used to own a pub, where he served his Irish potato nachos along with the usual bar fare. The nachos were so popular that he finally decided to open up this spot solely devoted to the Irish/Mexican dish. The nachos come in a variety of forms, including the El Diablo Pollo (onions and spicy chicken $7.95), Club Nachos (bacon, chicken breast, tomatoes, jalapenos and cheese $7.95), and Pescado San Patricio (seasoned fish, jalapeno mayo and cheese $6.95). 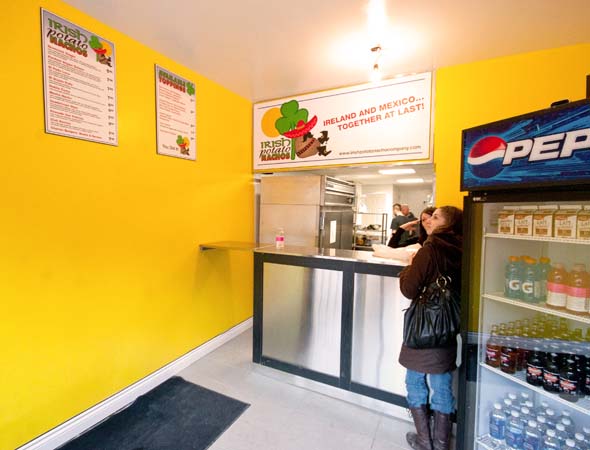 The kitchen packs our order in eco-friendly containers about five minutes later and we set out to find a spot to dig in. Though I was expecting greasy bar food, the nachos look fresh and colourful as I open the lid. And then I dig in. The potatoes aren't what I expected; they're soft, not crispy, so I use the fork handed to me as I left. They're also wonderfully spiced, which adds an extra element of taste over typical nachos with dry chips. The veggies are fresh and a little crunchy, which is how I like them. And they haven't skimped; there's lots of onion, tomatoes, and red and green peppers. The cheese, though, wasn't totally melted which was sort of a disappointment.

But overall, the Irish potato nachos were quite filling, and really tasty. Maybe the shamrock and sombrero were truly meant to be together after all? 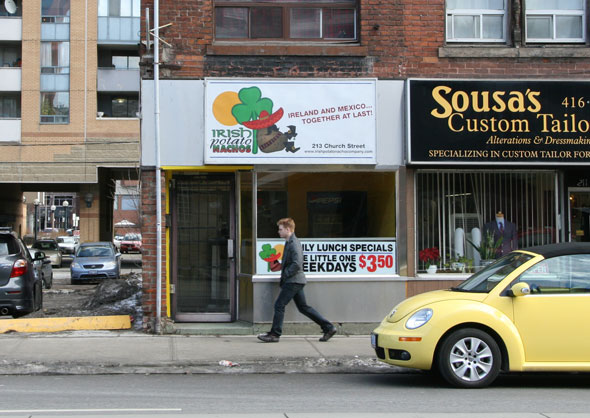