IKEA is a great brand to play word association games with. The polarizing purveyors of flat-packed furniture generate opinions almost as wide ranging as the company's selection of lamps.

For example, when people hear "IKEA" they might think; bookshelves, or yuppies, or economies of scale. In my case, I think meatballs. 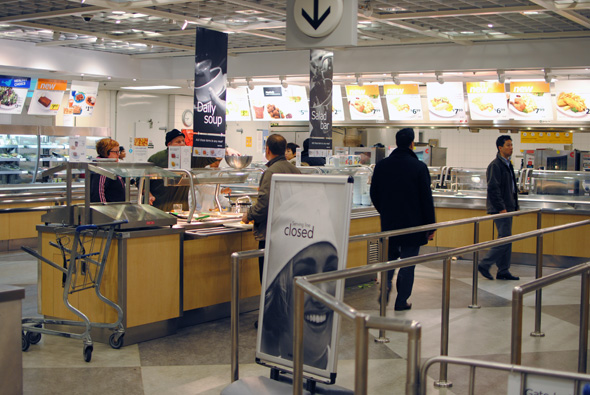 The stylish Swedish furniture empire has conquered the global middle class by selling the trappings of a bourgeois lifestyle at decidedly proletariat prices. As such, IKEA's restaurant is executed with an equally ambitious-yet-utilitarian philosophy. Just like a well designed 250 square foot apartment, IKEA's in-store eatery practically screams "yes! you can have it all!".

Ten meatballs, with mashed potatoes and a side of lingonberry jam (you don't have to preserve it yourself) costs a mere $2.99. On this Wacky Wednesday two pieces of fried Haddock and chips is an utterly wackalicious $2.99. Two organic crepes stuffed with spinach and cheese are just $2.79. A bowl of fresh chili accompanied by two pieces of garlic bread continues the sub $3 trend at $2.49.

In the higher strata of the menu, a roast BBQ quarter chicken with one side is available for $5.99 while maple balsamic glazed wild salmon with vegetable medallions and mixed vegetables (yes, double veggies) will set you back a cool $7.99. For vegetarians, there are a variety of salads and egg sandwiches available, all for under $5.

The high-end protein is too rich for our blood this night. We explore the buffet style serving area and settle on meatballs, chili, crepes and dessert in the form of a cinnamon bun and something called a princess cake that looks like the video game character Kirby, but with his limbs torn off.

Unlimited fountain drinks or coffee are just $1, and while there are surely thousands of us who've wanted to get tanked while walking around an IKEA, not many know this is actually feasible because the restaurant sells bottles of Carlsberg for $5 a pop. 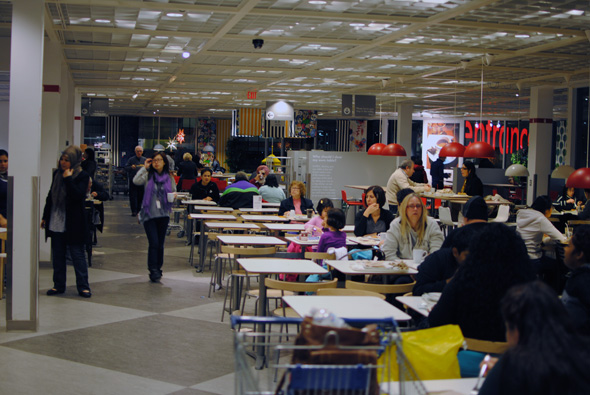 We find a relatively secluded table in the spacious cafeteria, half of which features wall to ceiling windows that would provide a stunning overlook of the parking lot if it weren't already dark out. The decor is obviously all IKEA furniture, which means the chairs are stylish enough to impress individually but also homogeneous enough to make you immediately kind of tired by them. 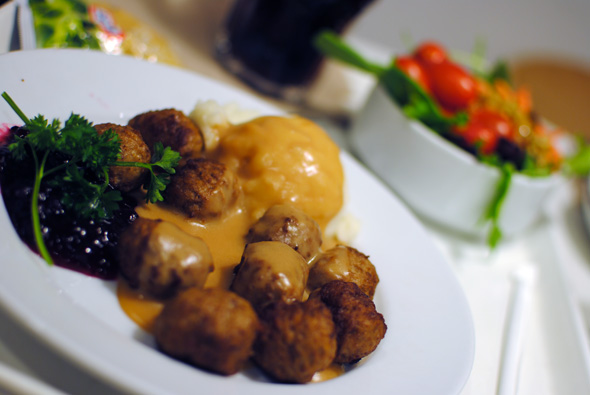 The meatballs have the look and texture of a fast food burger patty. The gravy they come in is a gelatinous pseudo-solid by the time we dig in. There is no apparent reason these meatballs should be satisfying. And yet, each sphere is surprisingly tender and appropriately dense when we bite in. Alas, the star of the show is let down by its supporting cast; the mysterious corn starch based gravy and college dormitory grade mashed potatoes bring down an otherwise enjoyable plate.

The organic crepes are supposedly filled with spinach and cheese, but it's tough to discern if this is true or not. These taste like reheated Kraft dinner stuffed in a manila envelope and should be avoided at all costs, even for non-carnivores. 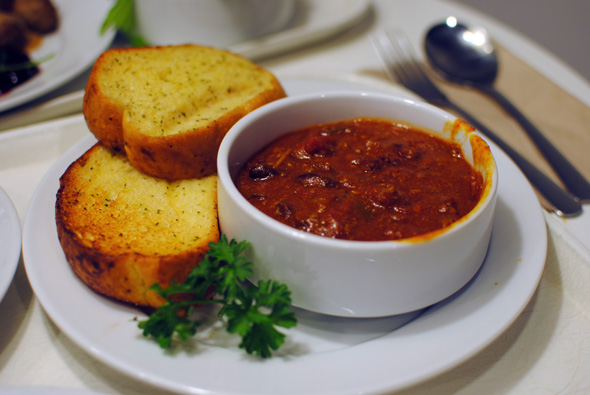 The heat lamped pieces of garlic bread are exactly as they appear -- decently toasted and adequately garlic buttered. The chili they come with is slightly on the thin side, with the ratio of kidney beans and ground beef not quite as hearty as one would hope. The lack of flavour also suggests there is no actual chili in this chili, but it's at least on par with the stew you might get at a Wendy's or Tim Hortons franchise.

It's a little late for disclosure perhaps, but I often come to IKEA just to eat. The food may be fast food quality, but have you eaten at a fast food restaurant lately? A fiver isn't going to buy you much. So if you only have a couple of coins in your pocket, IKEA's restaurant is one of the city's unheralded cheap eats options. Moreover, you could walk to the to-go food section of the store and buy 4 hotdogs at just 99 cents each.

No wonder these Swedes are so popular.