The Hopper Hut, a joint serving fantastic Sri Lankan out in Scarborough, inspired me to hop on the next RT.

Located at Ellesmere and Kennedy and hidden at the back of a strip mall, The Hopper Hut isn't exactly central, but when I walk in and get socked in the face with the smells of Sri Lankan cooking, I immediately suspected it was going be worth the trek.

With an unbridled enthusiasm for heat, Sri Lankan food uses a bewildering array of its country's famed spices - cardamom, clove, and turmeric to name a few. These are typically added directly to dishes, instead of being ground to a paste as with Indian cooking. Flavors are big and bold, and many meals are considered incomplete without the humble side dish that's keeps this place packed: hoppers.

Bowl-shaped pancakes made from rice flour and coconut milk, hoppers are typically served with curry or vegetables and fall somewhere between a crepe and roti. A cherished staple of Sri Lankan cuisine, The Hopper Hut's a great place to get them fresh, along with a broad swathe of Sri Lankan comfort food like curries, lampries and mutton rolls. With most dishes under $10 my fellow hopper hunters and I order up big. 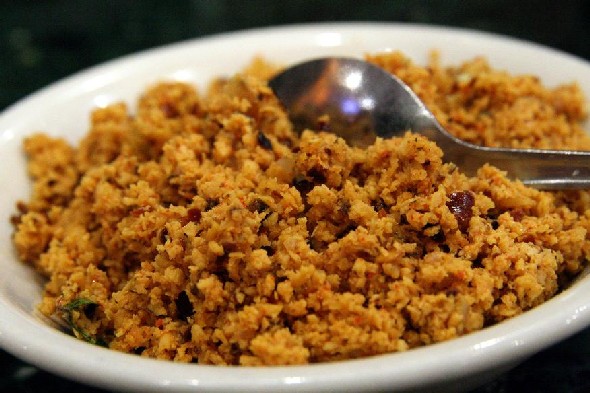 We start with a spirited coconut sambal, pappadums and yogurt, then four whole chilies we don't remember ordering arrive. Unsure if they're meant as a snack or a warning, I venture a nibble. The smoky flesh of the charbroiled pepper is dangerously good because they pack a seriously hot punch. The cooling yogurt comes in handy. 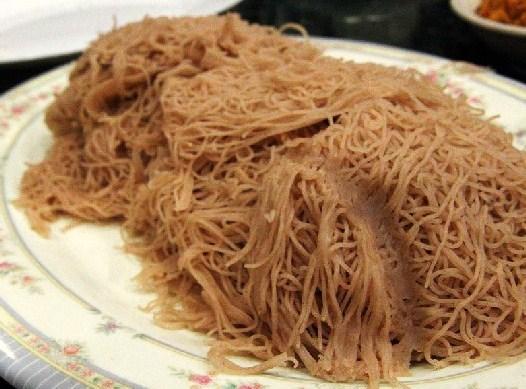 A bowl of mutton curry and a huge plate of what looks like vermicelli arrive next. They're the string hoppers - rice flour cut into thin strips and steamed ($8.00). The mutton is tender, the gravy full-bodied and the delicate string hoppers provide a melt in your mouth sensation that compliment the curry's spicy oomph. 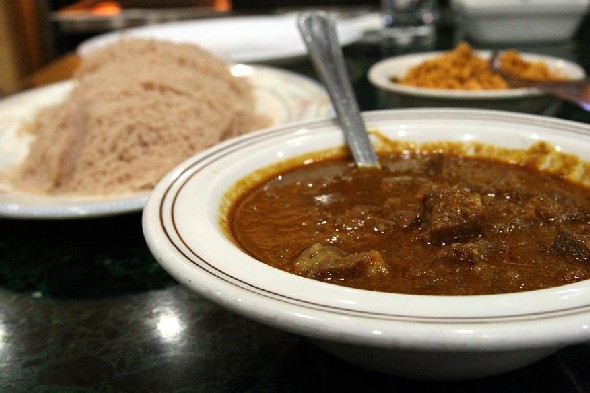 Next, the traditional hoppers arrive. Glistening fresh from the grill, I tear off a warm slab and dip it in the curry. The starchy base soaks up the gravy with aplomb, giving a mellower take on the sauce than its stringy sibling (it also tastes good enough to eat alone). 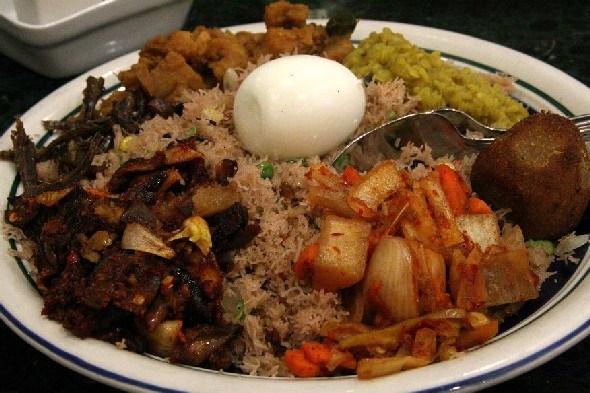 Before we can say more, a heaving plate of biryani ($8.99) is maneuvered onto our rapidly shrinking table space. A mix of curries and veggies slapped together on a bed of string hoppers, the dish looks like a Jackson Pollock - lots of color and texture all mashed together (and in this case, crowned with a boiled egg). It's not dainty but smells a treat.

The fiendishly hot acharu (pickled papaya seasoned with peppers) sets the bar high until some sort of over-sweet fruit chutney falls flat. No matter, the curried potatoes, rich with turmeric and chili bring the ball back into play, and lentils even out the relentless flavor assault. It's a rollicking roller-coaster of a dish, with every mouthful giving different flavors, textures and, dare I say it, memories.

We've barely made a dent in our mounds when the largest dish of the night arrives - so big it had to be wrapped. Lampries are food of the Burghers (Sri Lankans descended from European colonists). Meat or seafood, vegetables and spices are mixed with rice then wrapped and baked in a huge banana leaf. Our fish lampries ($8.50) comes wrapped in butcher paper, which in turn contains a colossal banana leaf. Unwrapping it like a kid on Christmas, I'm introduced to a piping hot selection of curries and veggies all steamed together (and once again crowned with the ubiquitous boiled egg). It's not the most aesthetically pleasing dish, but as soon as it's unwrapped we're fighting over it right away. 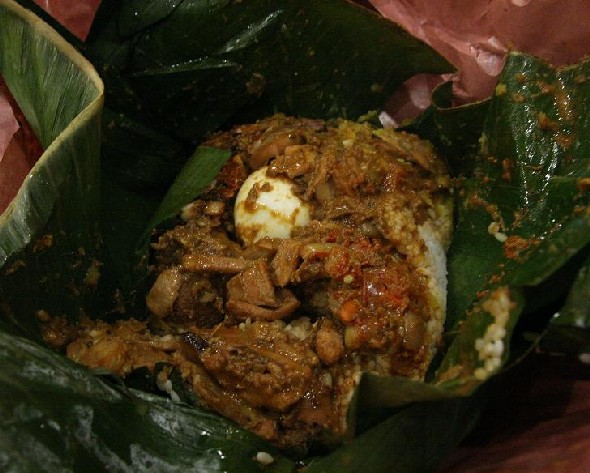 More than the biryani, this dish is a true collision of flavors; seven dishes rolled into one as the spices, over hours of steaming, influence the dish in different ways. On the sweet eggplant curry the cardamom and paprika are a revelation, yet on the neighboring beets they become overpowering. The squid is soft and Hades hot while small chunks of dried fish become blasts of ginger and garlic. Plus there's bay leaves, okra, nutmeg, cinnamon and star anise to keep my palate guessing, experimenting, mixing and mashing. Merged with the hoppers it's without a doubt one of the most challenging, complex dishes I've had in a long time, and at the price probably the deal in town.

I finish my Hopper Hut adventure with my belt a little looser and three large doggy bags in tow. The little place at the back of the strip mall has exceeded my expectations, and on the trip home I take a nap, dreaming of what I'll order next time. 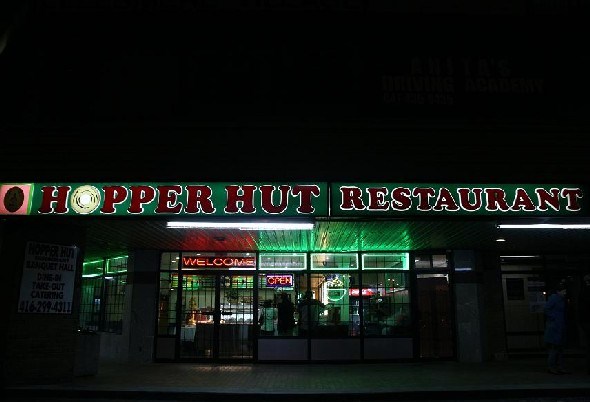