Glas Wine Bar in Leslieville packs more prestige than the nearly two years of quiet acclaim lets on. For a supper spot whose owner and chef, Danny Pantano, racked a decade of Michelin-starred experience from his tenure in Italy, Glas lacks the city-wide exposure you might expect. Yet, once you've gone, its modest status feels more by design than chance.

For starters, place settings are capped at twenty; an open kitchen makes it all the cosier. No bumping elbows exactly, but rubbernecking to spy on nearby dishes is a cinch. Also, the rhythm of the meal, whether it's prix fixe or menu-hopping, assumes a casual, unrushed tenor. Not that the service is slow. Usually it's Pantano himself, punctual at all the right moments, refilling, removing, resetting and reengaging. 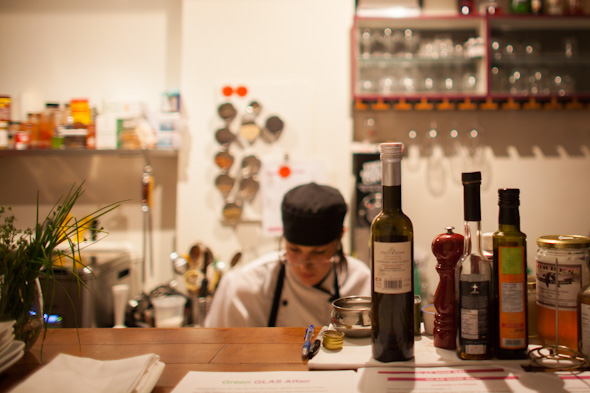 For those interested in eating local Glas is a good fit. Entrees change seasonally and food can be paired with $6 (or so) 3-ounce samplings, all featuring Ontario wineries such as Malivoire, Creekside Estates and Hinterland, to name a few. 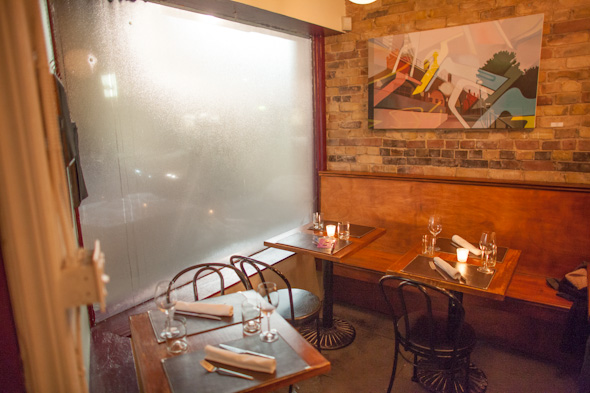 From start to finish, not a ribbon of celery root or micro salad frond is out of place. Whether it's snacks such as the double-toasted-then-dehydrated clusters of spiced nuts ($5) or comfort food plates such as baked mac and cheese with sauteed swiss chard, braised lentils, and carmelized onions ($16), Pantano's polished arrangements don't betray his experience. 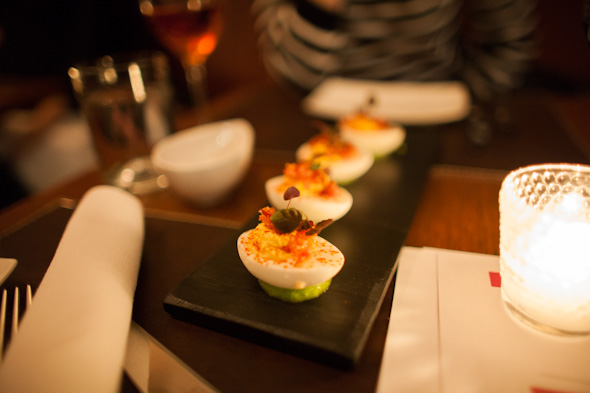 Delicate-as-glass devilled farm eggs ($5) are one such example, rainbowed across a chestnut-hued wooden slab and topped with a wag of smoked bacon, sprinkle of paprika and a sprig of shisho. I will say, though, that the yolk, cut with a sharp parmigiano rather than the mayo norm, made the cold halves more neutral and flatter tasting than desired. 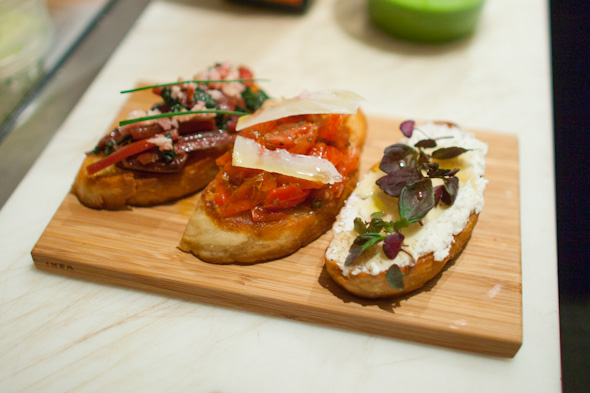 The crostini (3 for $6; 5 for $10; 7 for $14), were likewise easy on the eyes. The honeyed ricotta, fluffy and creamy, was by far the most delicious of the lot, the subtle sweetness of peppered Ontario wildflower honey nudging just above the clean flavour of the ricotta.

The crostini with beet tops and smoked local bacon was a winsome follow-up, but the bruschetta mix, like the eggs, were a tad too chilly, and could've used bolder seasoning and more marinating to open up the flavours of the crushed tomato. 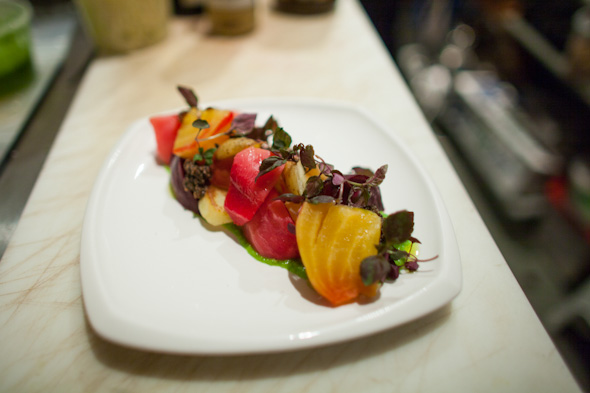 The beet insalate ($12) was outstanding. A thick cord of multi-coloured seasonal beets, is garlanded with more of that shiso leaf, and rests in a shallow stream of Italian black truffle puree and horseradish foam. Must have.

The shoulder-cut slices of flatiron steak (top photo) went well served on a base of creamy mustard mashed potato with red wine-braised red cabbage draped in a frizzle. The locally-sourced meat was quite sumptuous and tender, deep and rich, and, again, saddled comfort with class. 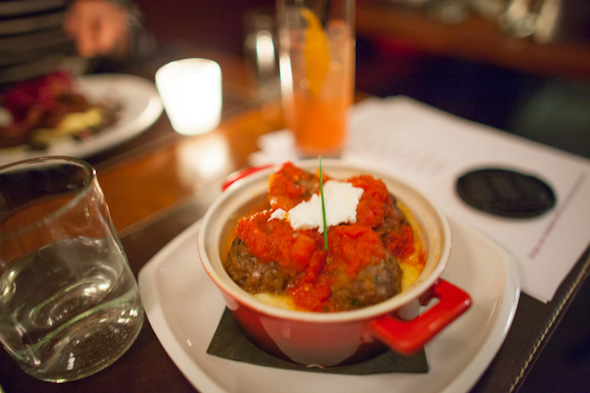 The mains may be relatively small, but mains such as the Italian meatballs will leave you barely able to consider dessert. 60 to 40 percent beef to pork, the recipe calls for breading soaked in milk, herbs, smoked paprika, sautéed leek, and Szechwan pepper. Looming on a bed of stone-ground polenta the perfectly tender meatballs are quenched by homemade smoked marinara, with ricotta and chives added for good measure. 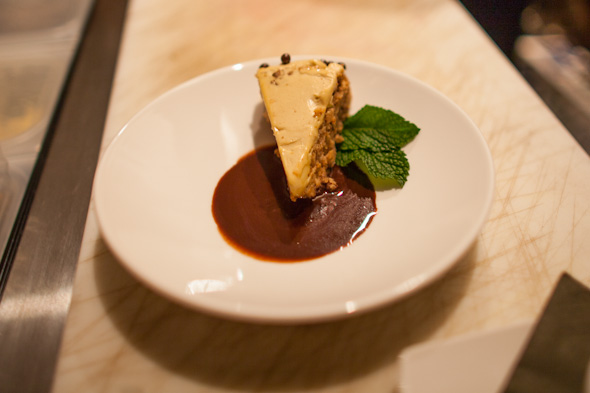 For those on the lookout for caloric atrophy, the 50/50 cream to milk ratio in the lavender-scented creme brulee ($6) is the wise option, but it holds no candle to its full cream kin. I'd opt for the mint-garnished walnut coffee cake in a light cocoa sauce ($7) as a pick-me-up after a long session at Glas. 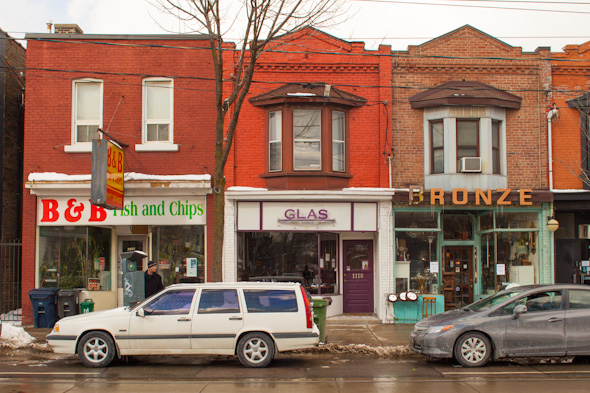 Note: In a neighbourhood known for brunch, it only makes sense that Glas has its own weekend brekkie menu. Features include a country frittata with spinach, parm and sundried tomato with a side salad ($10), and a crispy potato rosti flecked with smoked salmon, poached egg and side shredded cucumber salad ($12).