When this west end girl goes east, she takes the advice of the locals to heart... and "The Goof" ( nickname explanation here ) has been on the recommended list for a while now.

Drawn by the retro signage (a subject close to my heart) and pretty shocked by the slick renovations (I thought we'd stumbled onto a Spring Rolls location), I entered the Garden Gate Restaurant not really knowing what to expect. 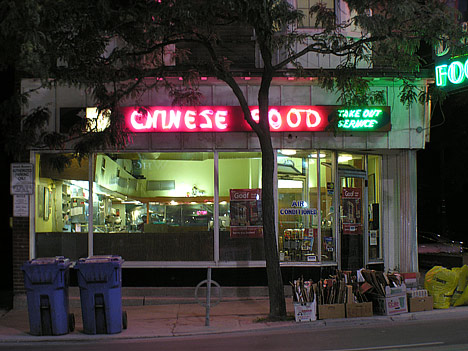 The last time I passed The Goof it looked like the above photo... retro-diner inside and out, and probably unchanged since the opening in '52.

Now, an overhaul has changed the facade (removed those "Chinese Food" neons you see above) and transformed the interior into a snazzy and modern Asian restaurant (see below). 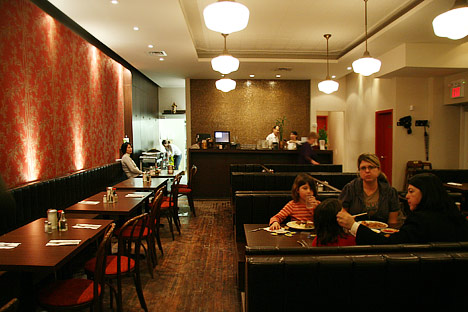 Two friends and I head in, sit down and are presented with menus by the friendly staff. These good old laminates tell the story of the Beaches landmark on the outside and present some pretty contrasting dining options on the inside.

Like a wise group of treasure hunters unsure of where to find the gold, we split up.

I took the diner food list and ordered up a hot turkey sandwich with fries and a side of onion rings for everyone to try. 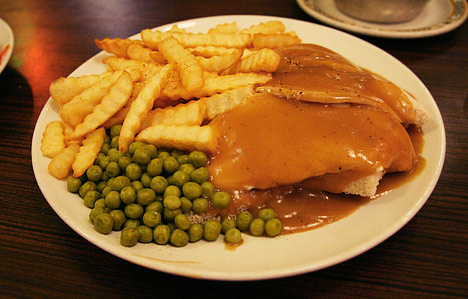 This dish definitely stood out... but moreso in terms of image than taste. The picture perfect vision of an oldschool diner entree, it just seemed so out of place in the new modern digs.

How was it? Well, the turkey was good and the gravy nice too. Would have loved a different choice of bread than the wonderbread that sat under the turkey stack. Crinkle-cut fries were a bit soft and certainly freezer-bag style, but decent. The peas were a nice traditional touch. Very classic diner stuff... food that is what it is and doesn't put on a show. Still, there's room for improvement here.

As for the onion rings: They were okay. I mean, they were good, but having grown up with the rings at Dairy Freeze , these just barely awakened a taste bud in comparison.

Friend #1, not feeling like diner grub nor real Chinese (as she'd just had a pre-Chinese new year lunch with her parents), goes for one of eight Canadian-Chinese combo dishes: 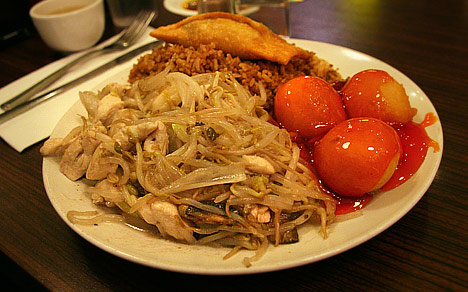 Kind of Manchu Wok'ish, except much bigger portions. The highlight was the chicken ball section, as they actually had visible meat in there (impressive!). Lowlight was the vegetable portion of the dish which turned out to be exceptionally bean sprout heavy. Flavour monotony ruled and this one was abandoned half-way through.

Friend #2 was feeling particularly adventuresome and took on the Chinese food pages of the menu. After much debate, the need for spiciness led her to the Ma Po Tofu with Minced Pork.

The waitress, pouring more tea for everyone, warned that that one was spicy. We assured her we were hoping it would be. 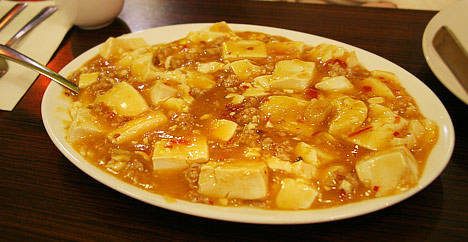 Now, this dish certainly isn't very photogenic but it was actually the tastiest! Hard to describe, the tofu, minced pork and saucy flavours just mixed well. In terms of spiciness, it was mild . Perhaps spicy to someone used to eating those crinkle-cut fries every day, but we'd throw some extra chili on there if we had the option. 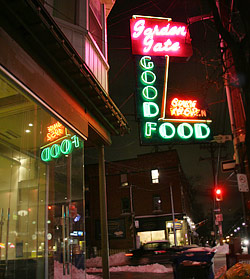 So then, the verdict:

This is where things are odd. The food was pretty average, but we really had a great time. Service was friendly, the mood was relaxed, and maybe it was that great neon sign glowing from its reflection in the window, but we just felt good here.

I, for one, will be back. Next time, we've all agreed to go all out on the Chinese food... after all, that *is* the house specialty.