Anyone remember the infamous Planet Kensington ? I know I do... and I've never even had the courage to grab a drink there. It was the last place I'd ever think to go for a pint or bite to eat, on par with the Jenny Cafe on Kensington Avenue just a few minutes away. These are places of intriguing yet humble legend in my mind. A little sketchy to go into, but in that really interesting and comforting way that only really worked in Kensington Market. Planet Kensington was an amazingly important landmark in the market, both to those who'd stop by for a drink, and for those (like me) who just loved to peek in as they strolled by.

So it's with mixed emotions that I sat down in the newly renovated Freshwood Grill that now takes its place along Baldwin Street, tucked snuggly between a fish monger and a military shop. It could have gone either way for me really. So was Kramer right? Is it actually the "wood that makes it good"? 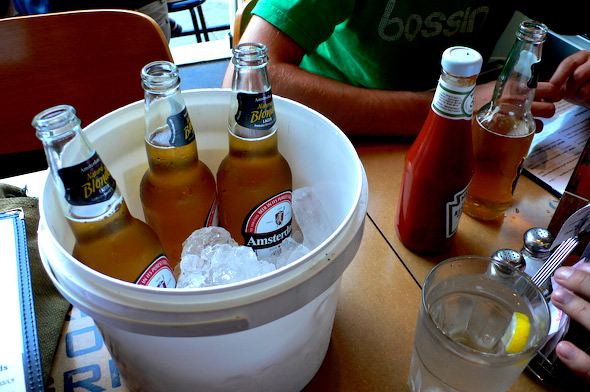 We started off with a $15 "Beer Bucket"... which is exactly what it says it is. It's a bucket with some beers in it. Local Amsterdams to be exact. A fun idea that we appreciated, though we all agreed that there should be 6 beers per bucket, not 5. 5 just seemed like a weird number of... well... anything food-related that you'd share around a table. Of course, we also might have thought this because there were 3 of us and we each raced to get at the last 2 in the bucket. Either way... 6, not 5. Please and thank you. 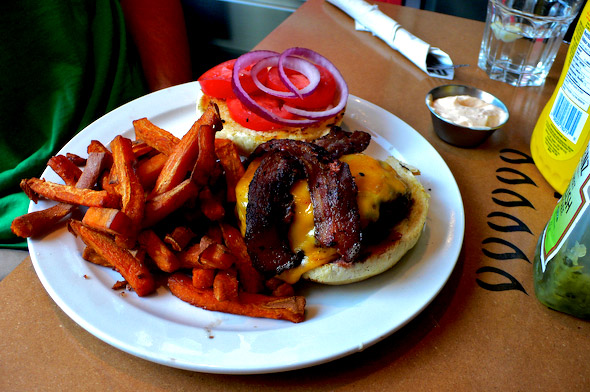 My friend went for the Organic Beef Burger and Sweet Potato Fries. Simple, tasty, no-bullshit food, and cooked over their infamous wood grill (as their name clearly indicates). In a city filled with restaurants trying to "out-burger" eachother by throwing weird and exotic ingredients onto the same stale and flavourless piece of meat (am I the only one who thinks Hero Burger is just plain bad?) it's nice to see a place that does something simple really damn well. Fresh meat, cooked perfectly and served unpretentiously... the way a burger should be. 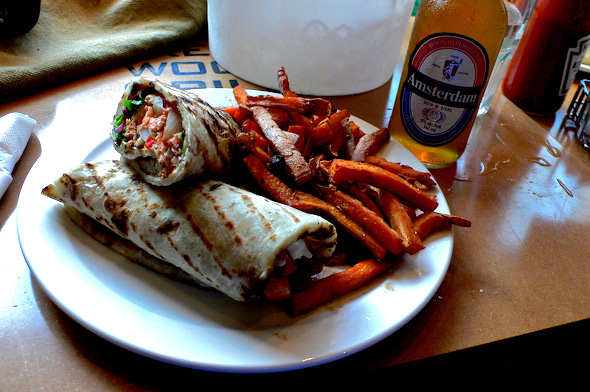 My other friend and I tried their Featured Market Fish of the Day (Rainbow Trout), which can be ordered in a standard meal or in sandwich-form. We felt like sandwiches. Seeing as how this place is literally steps away from two fish mongers, it just makes sense that they would feature some fresh fish on their menu, served at market price. I absolutely love this idea. When a restaurant sets up shop in a market, they should make a point of featuring what that market already has to offer. Why outsource produce from a supplier miles away when you have the best of Ontario right on your doorstep? Oh, and the grilled sourdough flatbread: simply to die for. Granted, I have a thing for sourdough, but regardless... 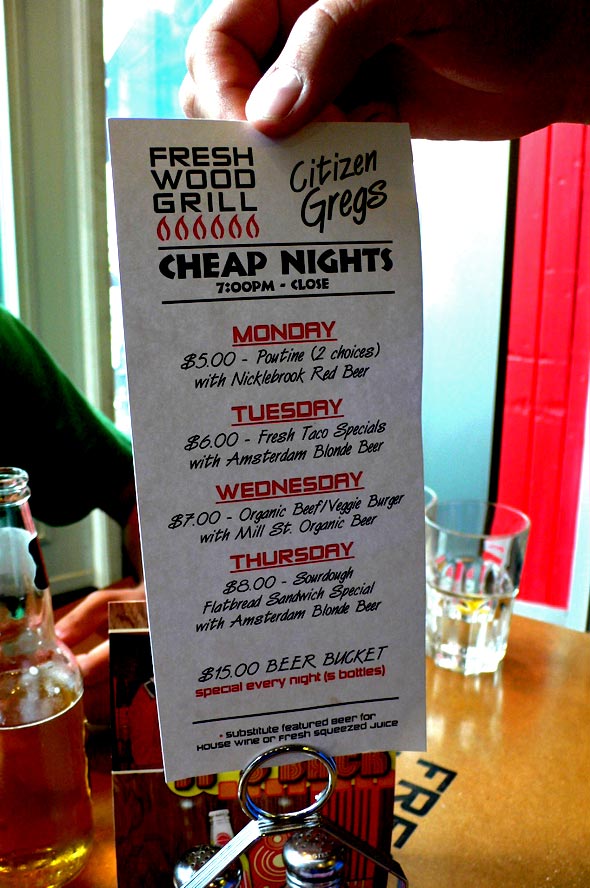 On top of an already wide range of selections on their main menu (breakfast served until 5pm, organic beef and veggie burgers, freshly made salads, and A LOT of sandwiches), Freshwood Grill also offers some great featured items from Monday to Thursday. Poutine and local beer for $5? Yes please. 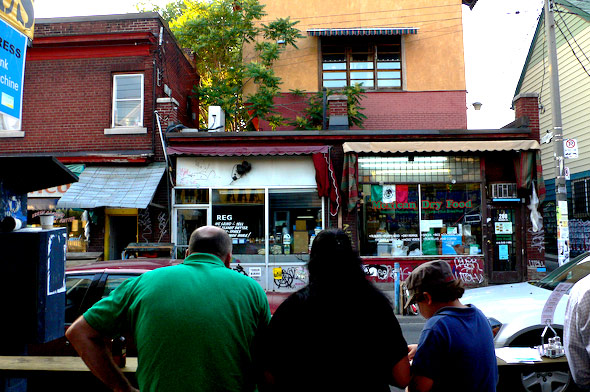 So what's the verdict? Yes, the food is great. I've been here a few times already and haven't been disappointed. Everything is fresh. They make a point of sourcing organic. They offer a bunch of veggie items (including an amazing Grilled Vegetable Sandwich). And when you grab take-out, you get your order in a nice little paper-based container... not styrofoam. A big plus in my books. So what's the catch then? Well, their "let's-try-to-be-multicultural" mural kinda makes me want to throw up a little bit... though it can be fairly easily ignored if you get a window seat. And the service is a little hit-or-miss right now... but I'm sure this will improve over time. Either way, the Freshwood Grill should definitely be tried. Though it may never fill Planet Kensington's historical and cultural shoes, it still shows much love to the market that surrounds it, and this is a very good thing.