Frankie's is currently open but their offerings and services may be affected due to the pandemic. Please contact the business directly for more information about any changes. Is this your business? Please contact us if you would like to update this message.

Frankie's is not, as many curious onlookers might assume, a new restaurant. Nor does it have (as it boldly claims on its front signage), the world's best burgers--but they're pretty damn good.

Frankie's has, in fact, been a West Queen West diner fixture for around 35 years, serving a changing community from its cross-CAMH location. However, much like its Ossington neighbours, a stone's throw away, Frankie's needed to evolve with the times, and its significant refurbishment came as a mixed blessing in the form of Restaurant Makeover . I overhear that they were closed for two weeks while the spot was gutted and overhauled, and there is much hand-wringing. 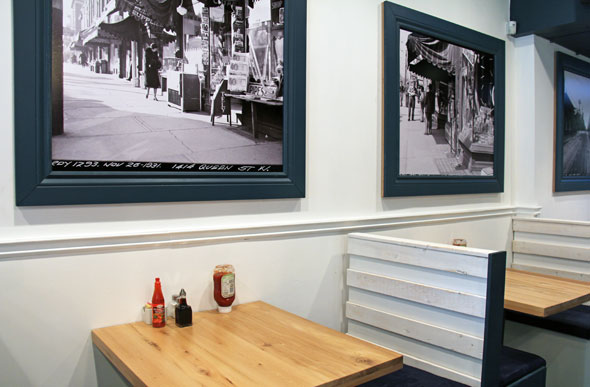 But the result is truly a sight to behold, and their initial concept of subway tiles has translated into gleaming white-tiled walls, industrial stools, a white marble wraparound bar, and a nod to the area's history through vintage photographs framed in blue wood. There's an almost Eastern Canadiana feel to the worn blue plush seats and white-slatted backing of the benches, paired with blonde wood tables. 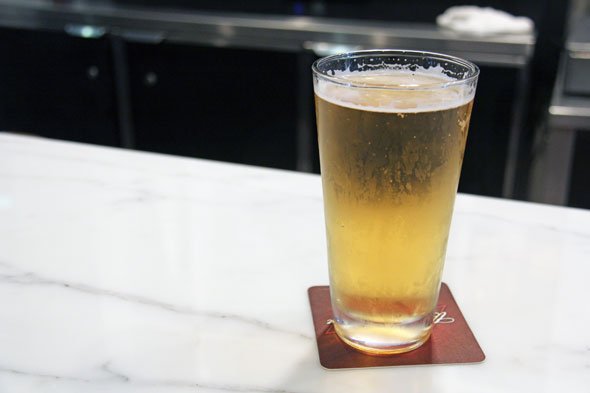 Although it looks swanky, the prices are refreshingly low (and reminiscent of its previous incarnation), and I should warn that the menu is admittedly in flux. But they have Labatt 50 and Mill St. Organic on tap for $6, Cool ("beer-water," my boyfriend dubs it) for $4.50, and bar rail is $5 across the board. 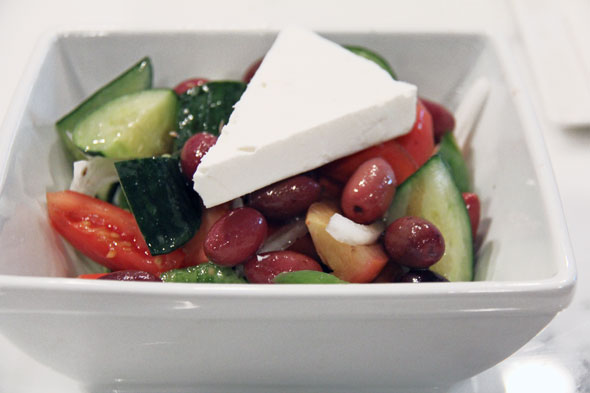 We start with a rustic Greek salad ($6.95), which is a colourful, heaping bowlful of fresh tomatoes, cucumbers, green peppers, onions, and black olives. The dressing is simple olive oil with a touch of balsamic, and the feta arrives (rather intimidatingly) as a thick slab atop the rest. It has all the familiar flavors of a dish that would be difficult to execute poorly, but my preference would be to exclude green peppers, and don't skimp on the acid. In this, as with many of the dishes, there's an excess of salt. 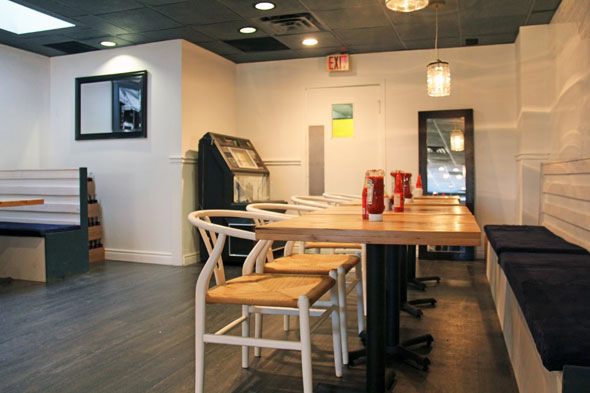 For discerning burger eaters, you should note that there are regular burgers (plain ol' Canadian beef) and specialty burgers (8 oz of Canadian chuck, and served with hand-cut fries). Both of ours were the latter--go big or go home (or go big, and then go home in a meat-induced coma).

First up was the Aristotle. The burger itself is quite large, and comes topped with feta cheese, tzatziki, tomatoes, cucumbers, onions, lettuce, and a drizzle of olive oil. Delicious? Yes. This might sound like an odd combination of flavours, but it neatly approximates the flavours of a gyro. Unfortunately, I've had something very similar with a lamb burger, and my loyalties remain with that. 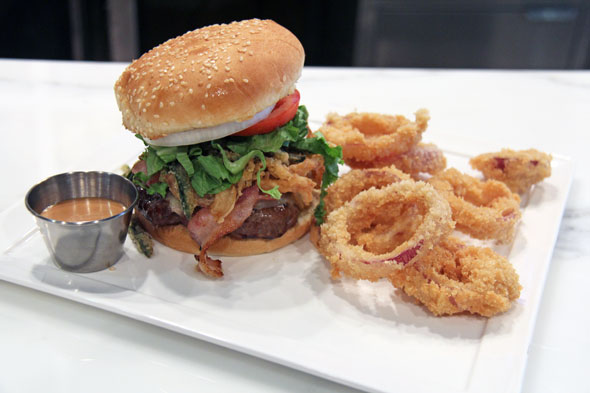 Next up was the Smokin' Hot Honey. This one is a behemoth, and unwieldy for any two hands (particularly my small, stubby-fingered ones) to handle. Jalapeno havarti, bacon, lettuce, tomatoes, and a smoked mayo, which I opted to get with beer-battered onion rings. This is one flavourful burger--spicy, smokey, and packing a double dose of meat--and might do well as a shared plate. However, the beer-battered onion rings even look hand-made. Thick onions coated in thick, uneven batter, deep-fried and paired with a smokey, spicy mayo--heaven.

Family owned and operated, the eponymous Frankie's sons look almost embarrassed by the change, and are frequently heard to offer unnecessary apologies--"our first day back"--and even a 10% first-day discount. Despite this, they're surprisingly busy by 8 p.m., with equal parts barflies, take-out customers, and families. 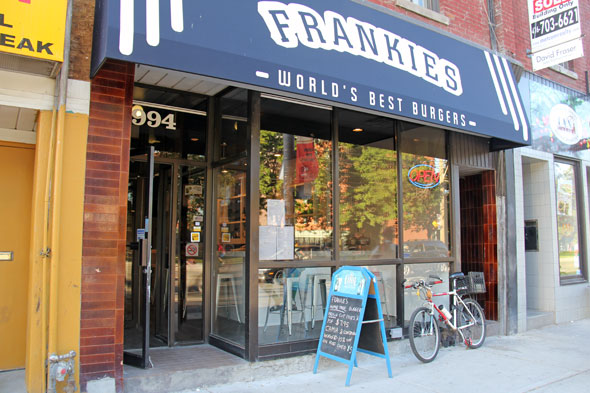 I hear that they're planning a dessert menu, with apple pie and banana splits, but have yet to cement the details. Their menus are, for now, printed on paper, until they settle on a selection that matches their new digs with their long-standing tradition of good, simple food and a $5 breakfast. "That foot-long hot dog ($6)," one of Frankie's sons tells me. "I wanted to name it the Ron Jeremy." And really, why not.