Feel Good Guru is the brainchild of Moira Nordholt, a wonderwoman-type who, aside from being a self-taught vegan chef, has studied yoga in India, massage in Thailand, and written books and articles on plant-based diet (we are not worthy, etc.) She's also helped by Anushka Garnier, a nutrionist whose passion for their product is infectious.

"It's important to us that we be both nutritious and delicious," Garnier tells me, and as she describes the various benefits of their dishes-heightened energy, improved digestion, generally feeling like a unicorn - I'm actually excited. 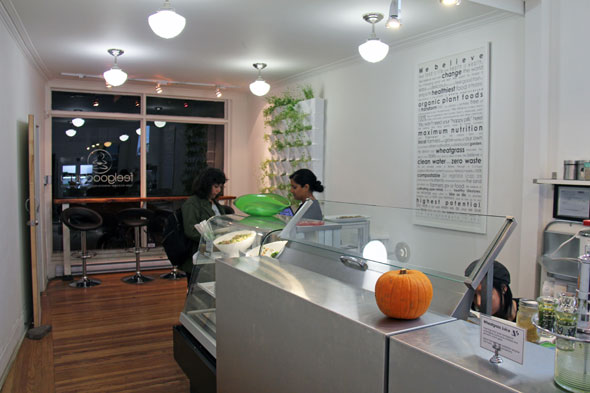 There is much talk of "live" food, which brings up memories of sped up plant growth videos from science class, and the wall of sprouts by the entrance--which you're encouraged to feel, smell, taste, and garnish your meal with--feels a bit alien. 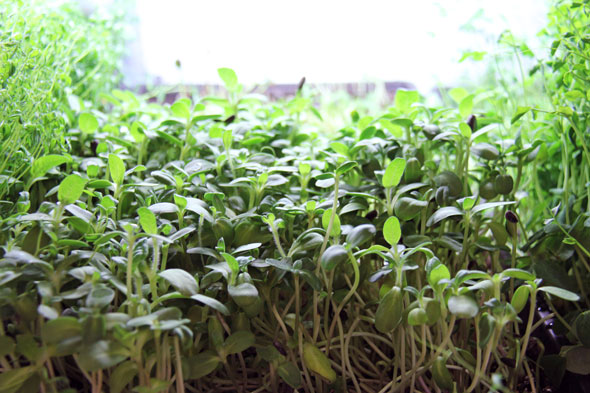 It's indicative of their mandate for freshness and local foods that, during an unplanned evening visit to the small restaurant, a farmer drops off crates of heirloom tomatoes and kale from the nearby Trinity Bellwoods Farmers' Market .

Their indoor urban cultivator is blindingly verdant and contains sunflower sprouts, spicy lentils, and wheatgrass (among other greens). 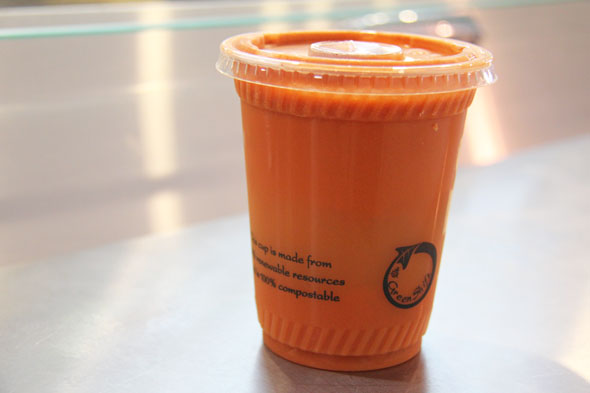 For those who like to grab and go, Feel Good Guru offers a juice bar, including their wheatgrass happy hour. A bit pricy at $5, you get the benefit of knowing it was grown and pressed on-site--it travels a mere 8 feet. We try the energizer ($8), which blends together carrot, apple, and ginger for a well-balanced mix of zest and sweetness. 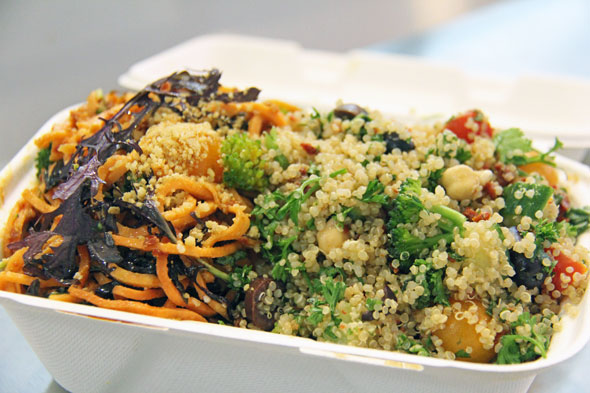 To begin, we opt for the "wild inspiraled" ($14) and the "cosmic quinoa" ($12). You can either get the noodles and salads separately, or mix and match within the same size container for an even $14. 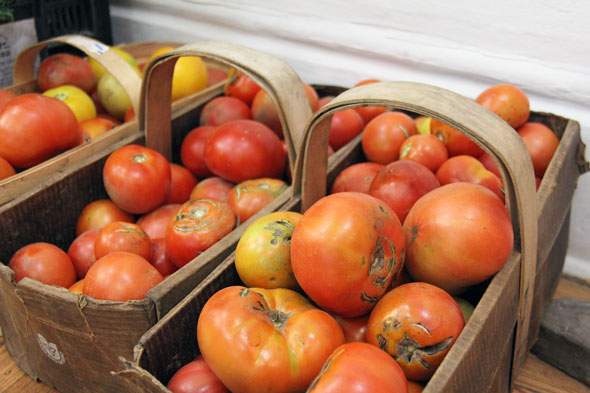 The "wild inspiraled" features yam spaghetti (spaghetti made out of, not flavoured with, yams, and it's incredible) in a sundried tomato pesto with broccoli, black olives, cherry tomatoes, and a convincing Parmesan look-alike made of walnuts.

The quinoa salad mixes cucumber, sprouted chickpeas, tomatoes, spices and an olive oil and lemon dressing for a combination that tastes remarkably garden-fresh, although the uncooked chickpeas give me pause. 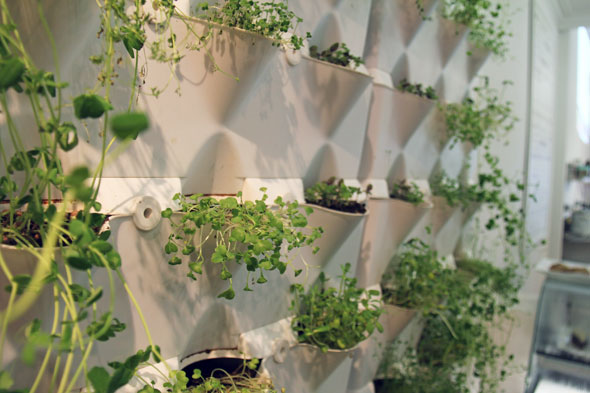 The "Earth burger" ($15) is, to put it mildly, not our favourite. The patty is composed of sprouted buckweat and quinoa, hempseed, as well as chia, pumpkin and sunflower seeds, and considering its contents, is dense and quite satisfying.

It comes sandwiched in a "live" yam bun and garnished with tahini garlic sauce, house-made mustard, cucumber, tomato, pickle and cashew cream cheese, but is, for reasons I don't understand, sweet. There's a fruity aftertaste, the sauce is laid on a bit too thick, and the patty has an almost chalky texture. 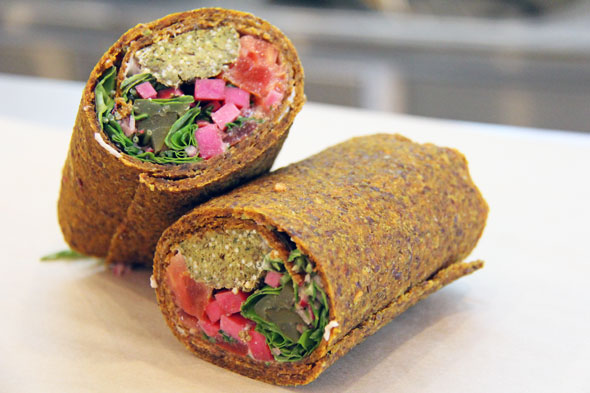 The "feel good falafel" ($14) is a definite improvement. The falafel balls are made of sprouted chickpea and quinoa, the wrap is made of live yam and red pepper, and the toppings are fresh, plentiful, and most importantly, full of flavour.

Cucumber, parsley, tomatoes, house-pickled veggie and local radishes add a lot of colour, crunch, and paired with the tahini garlic sauce, there's a lot of chest-warming spice and the right amount of tartness. 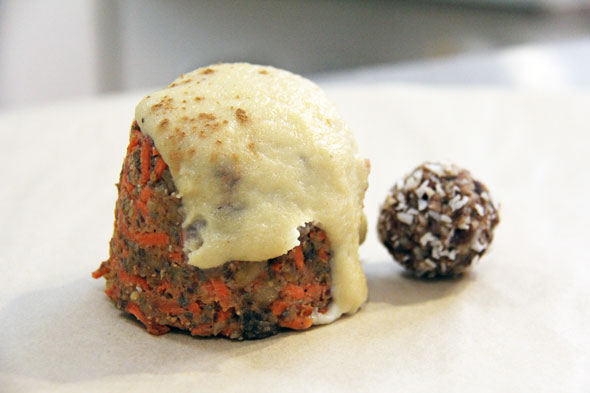 I really can't resist the "sexy raw carrot cake" (for many reasons, including its confident name). We brought our meal home, so by desert time, I had already resigned myself to more tastes of the earth. This one was a pleasant surprise.

Yes, carrot is front-and-centre, and no, the vegetable itself hasn't been miraculously sweetened. But with the help of raisins, dates, spices, nuts and a gooey cashew, cream cheese and maple icing, it does a good impression of that oh-so-beloved cake. 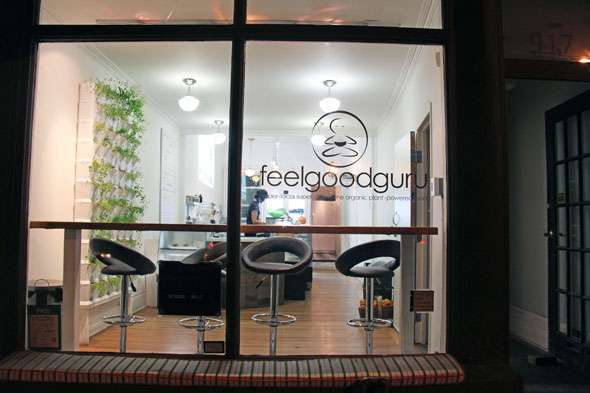 Predictably, for a restaurant focusing so heavily on vegetables, the salads are the best part, and maybe it's because they're not trying to be something they're not. Both sandwiches certainly look like their non-vegan counterparts, but they taste overwhelmingly of garden - they're also far better for you, and that's the true payoff.