Fat Phill's is back. After a couple of moves from the original Marlee Ave. location, and a short hiatus, Fat Phill's has re-surfaced in Midtown. And yes, it's still the same Phill. Now just north of Davisville on Yonge, the new shop maintains the same casual feel as the original location. Familiar caricatures of Phill and his burgers decorate the walls, and old dinosaur toys direct you where to leave your trays.

As we approach the counter, Phill quickly introduces himself and starts running through the menu. He offers three burger sizes: the 'Little Guy' (4 oz), the 'Big Guy' (7 oz), and Suicide (two 7-oz patties), as well as turkey and veggie burgers, peameal sandwiches, ice cream, milkshakes and many other diner-style meals. We place our orders, grab our seats and in less than 10 minutes are called back up to the counter to dress our burgers. 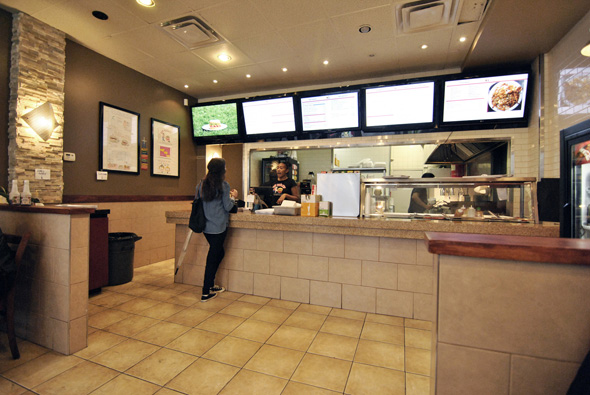 The Big Guy Swiss Melt burger ($9.50), came topped with a generous portion of a mild Canadian Swiss and freshly sautéed mushrooms. The thick patty was cooked to a perfect medium over the char grill. My high school memories of this burger rang true and were enough to sell me on a repeat visit to Phill's - but next time, I'll skip the mediocre onion rings. 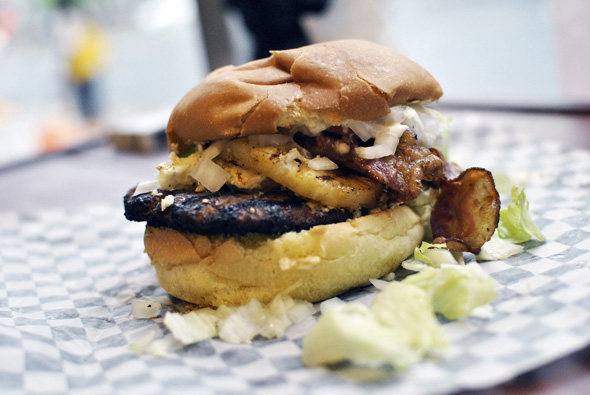 The Little Guy Blue Kahuna ($6.99) was topped with blue cheese as thick as the burger patty, two slices of grilled pineapple and four strips of bacon. Once topped with lettuce, tomato and pickles, this 'little guy' stood nearly a half-foot tall. The strength of the blue cheese mixed surprisingly well with the sweet pineapple and smoky bacon.

The flavours were nothing if not bold, making this burger a good choice for someone with an adventurous palate. Meanwhile, the Big Kahuna burger ($9.50) swapped the blue cheese for mozzarella - another dynamite burger, though it required at least a half dozen serviettes to maintain some semblance of manners while eating. 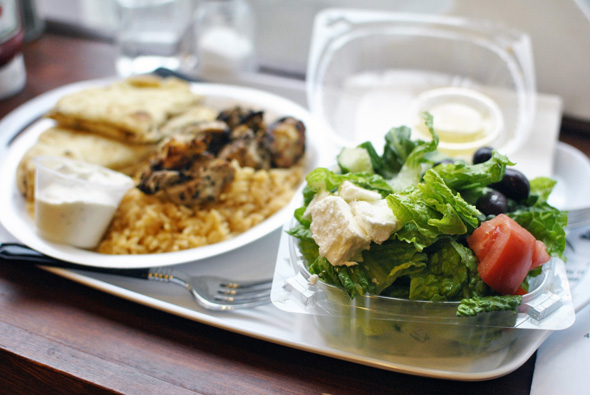 The chicken souvlaki platter ($10.99) was a skewer of char-grilled chicken atop a bed of rice, served with a side of pita bread and a romaine-based Greek salad. The chicken was a touch over cooked, but still had a nice seasoning. This platter was fine, but certainly not the thing that is going to pull you back to Fat Phill's.

In a city of endless gourmet burger shops, Fat Phill's is a great throwback to the homestyle burgers many of us grew up on. With hefty portions, reasonable prices and a lot of walk-by traffic, it looks like Fat Phill's has found its new home. 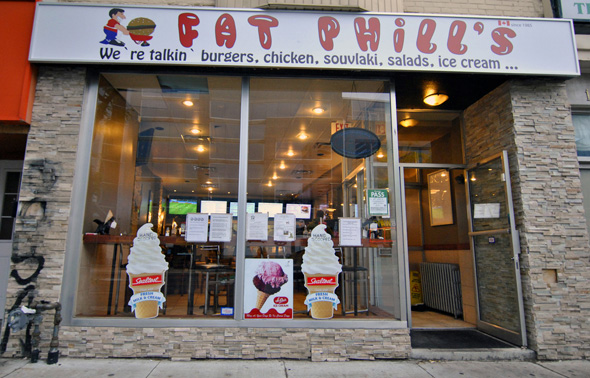