Two summers ago I took a trip to Japan, partly to connect with a family and culture I never really knew I had, but also... to eat tons of amazing food . Since coming back, I've been going through a sort of constant gastronomical withdrawal of real Japanese food. Anyone who's had the real thing, made by real Japanese chefs, will know what I'm talking about. But for those who don't, I have some good news to report: there is a place in Toronto that does the real thing really well. It's called Ematei, and if you haven't heard of it, that's probably because it's hidden away in the most unlikely (and hidden) of places. 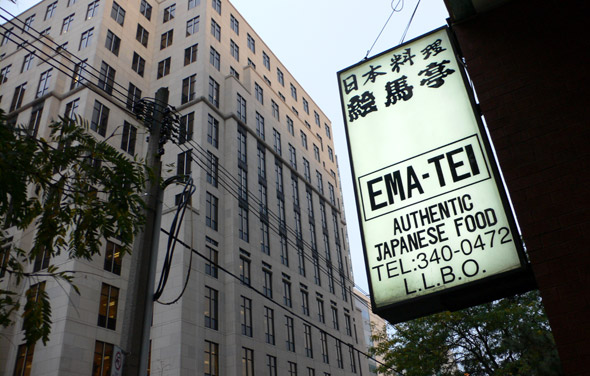 The first thing you notice about Ematei (if you're lucky enough to stumble upon it) is the seemingly odd location. Tucked away underneath an office building on St Patrick Street, just North of Queen West, this cozy (though deceivingly large) establishment has brought the best of Japanese homecooking, bar food, and sushi to downtown Toronto. Of all the places I've been to in this city, in terms of taste, service, and even the design and decor, Ematei comes the closest to what I experienced in Japan. Nostalgia through and through... 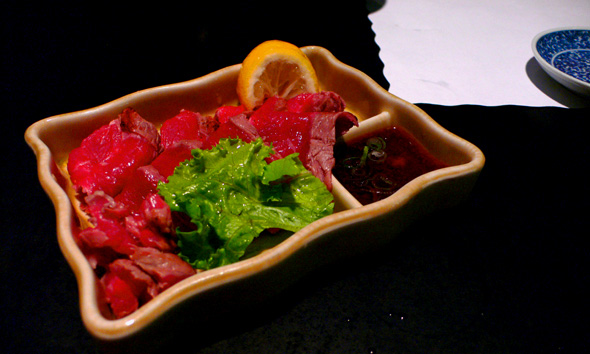 To start off with, one of my all time favorite dishes: Beef Tataki. Tender slices of beef sirloin, seared just slightly over high heat so that the inside remains raw, and finished off with a Benito and Ponzu-based sauce. Essentially like Sashimi, only in beef form. How can you go wrong? 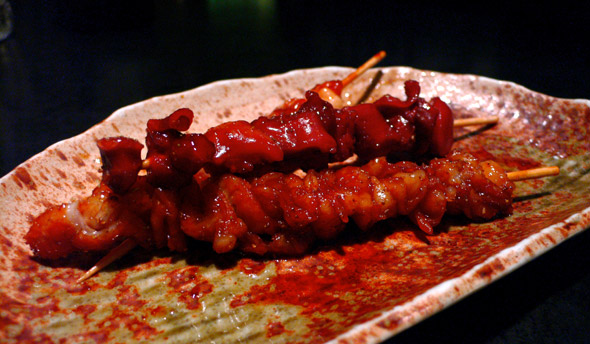 Up next were various types of Chicken Yakitori. If you were ever curious as to what classic Japanese bar food is like, this is it. Sort of in the same way that old school French cuisine uses all the "nasty bits" in dishes historically reserved for the lower class, Japanese Yakitori makes use of these same parts in skewer form over an open flame and it's typically served with several rounds of cold beer. This particular appetizer paid homage chicken through four different skewers of "lesser quality" cuts... those being leg meat, gizzards, hearts, and chicken skin. I'll be perfectly honest with this one... the gizzards aren't my favorite thing in the whole world. Far too chewy and tasteless. But the other three offerings are just brilliant. Not the healthiest bar food in the world, but then again, bar food was never really meant to be healthy. 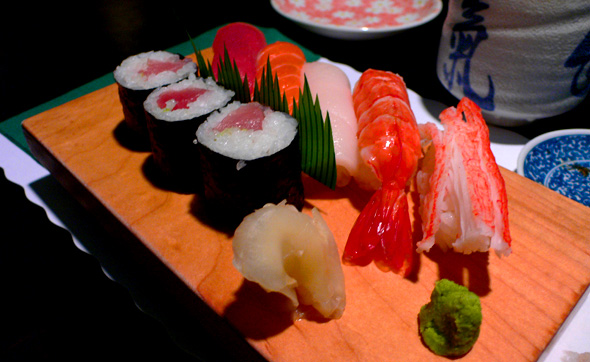 Here's their standard Sushi Appetizer. A swimmingly fresh selection of raw fish, and rice made with noticeable care. Sushi rice may seem like a rather simple thing... but you look at it in a whole new light when you realize that when up-and-coming sushi chefs apprentice in Japan, they must only prepare rice for several years before they're even allowed to touch a fish. Such an appreciation for the simplest of ingredients proves truly magical in the long run. 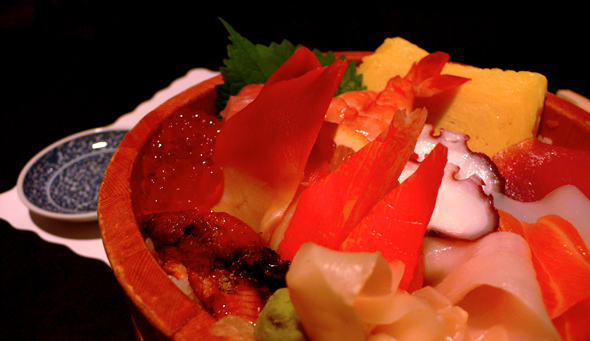 Now on to the big guns. In my family, the measure of a really wonderful Japanese restaurant is always their Chirashi. This dish is typically a little bit of everything, usually whatever is freshest that day (mostly the good raw stuff), all served over a bed of sushi rice. A standard Chirashi dish will usually set you back about $12 to $15. Ematei's is $27. Is it worth it? I'm not too sure at this point. The fish is as fresh as it gets in Toronto, which is always what you end up paying for at a place like this. At this point in my life, a $27 Chirashi isn't really in my budget... but for a treat at the end of a long and frustrating work week, it's a hard meal to beat. 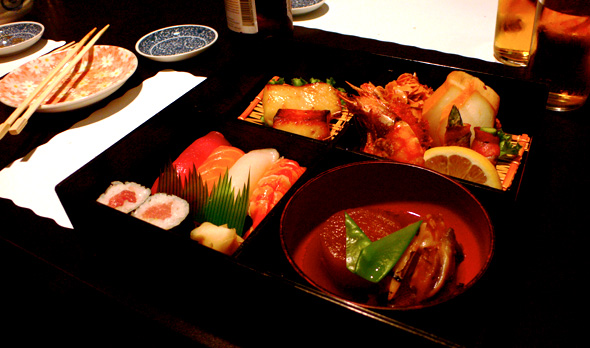 Lastly, I wanted to get a good general taste for the kind of dishes Ematei specializes in, so I decided to order their Ematei Bento Box. Usually I tend to gravitate away from bentos, but as a first time dish at a new restaurant, it's usually a good way to go. And this one was particularly exceptional (though about the same price as the Chirashi). 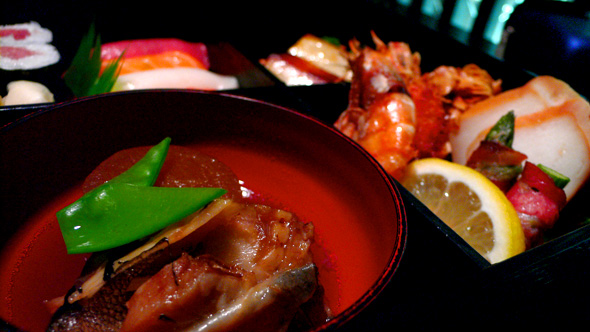 In this corner, Daikon radish poached in a benito and soy broth, topped with a mouthwatering grilled fish cheek (arguably the tastiest part of any fish). Simple, soothing, and tasty. 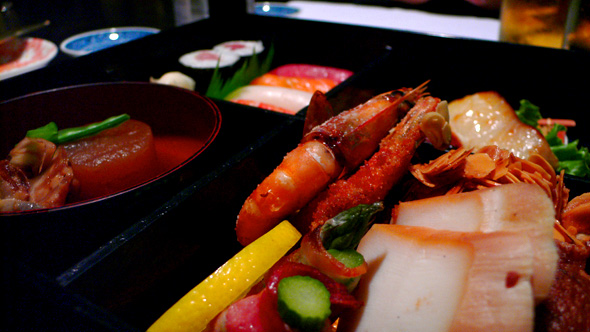 To the right, a collection of small tasty things (for lack of a better description). Smoked fish cakes, deep fried whole shrimp sprinkled with salt (so simple but so damn good), breaded pan fried shrimp, crab cake wrapped in abalone then breaded and pan fried, bacon wrapped asparagus, and finally the highlight of this corner... dark chicken meat, breaded with almond slices and deep fried. I've never tasted anything like it... even in Japan. A wonderful pairing of savoury and sweet. 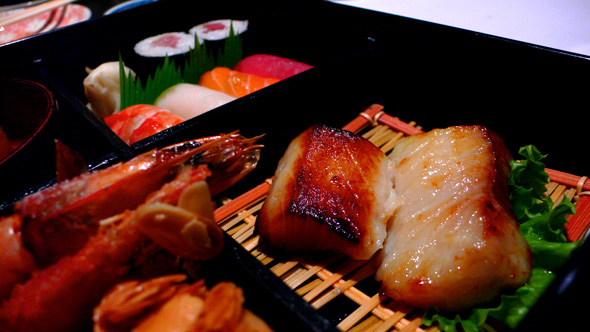 And in this corner, a simple offering of grilled sea bass, glazed with a sweet sauce that tasted a little like maple syrup... but I'm almost certain it wasn't. I spent a good twenty minutes trying to figure out what the sauce actually was, but was never quite certain. Honey maybe? A touch of citrus? Either way, delicious. 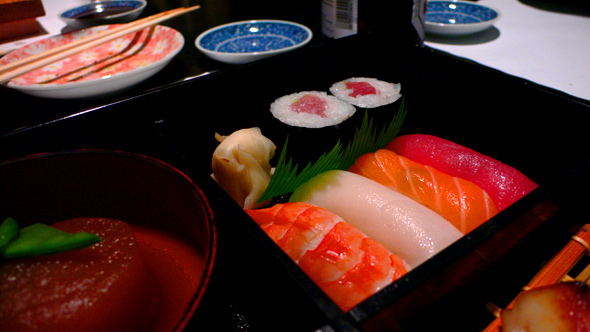 And to end off the meal, a nice selection of Sushi and Nigiri. If only all meals ended this way. 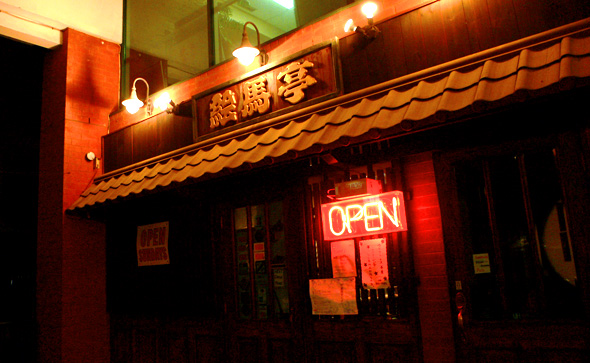 When all was said and done, we were nothing but pleased with our meal at Ematei. A nice piece of Japan to call our own in Toronto. One obvious criticism would be the rather steep price of their standard dinner items (though their lunch menu is actually quite a bit more reasonable). This place will end up being more of a "special treat" spot rather than a regular dinner spot for me. Regardless, it's nice to know there's an authentic Japanese place in this city serving up the real thing. The perfect cure for Japan withdrawal... just try to schedule your withdrawal around payday, and just for fun, treat it as a special occassion.