Elle m'a dit's smiling, jovial host welcomed us in from a chilly November evening, like a proffered glass of hot, mulled wine at the end of a Marché de Noel. Actually, for a painfully long sixty seconds, we were fooled into thinking there was no vin chaud in the house but soon discovered that our waiter had a superb talent for deadpan humor, and luckily, a deep vat of spiced red wine. 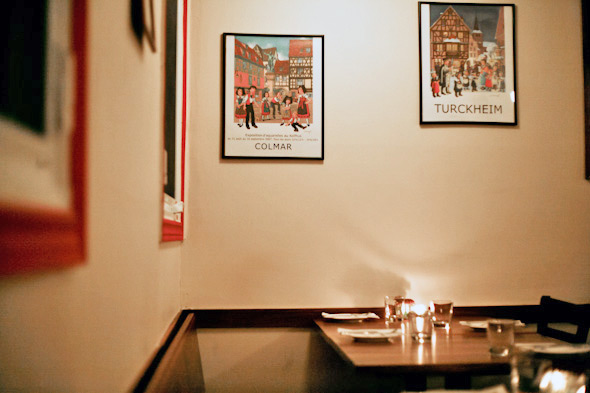 I came to Elle M'a dit, hoping to relive a bit of nostalgia from my university days in eastern France, and was fully indulged in little details which translated Modern Alsatian into a full sensory experience. High, white ceilings and slim wooden pillars: a re-imagined cathedral; starkly bright red window frames and prints of Christmas markets in Colmar and Strasbourg were kitschy touches in an otherwise minimal interior. Our waiter, now repentant for his cruel joke, informed us that the menu was designed for sharing and that leftover bites were simply not tolerated. 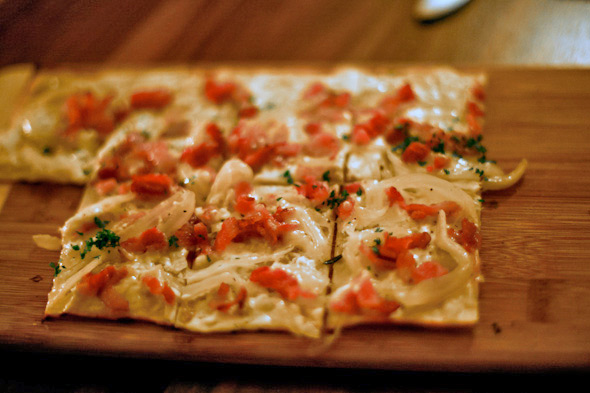 We started with the traditional tarte flambée ($10) and could hardly believe that it hadn't been flown in on an express-post butcher's block straight from a wood fire in Strasbourg. Classic tarte flambée consists of a layer of cream sauce, onion, gruyere and bits of fatty bacon. These are named fondly by the French "lardons", although most North American menus shy away from such unabashedly honest nomenclature. Our melty, crisp-edged tarte was about the size of an extra large postcard, cut into 8 two-bite chunks, so I would suggest dining in groups of guests divisible by two, to avoid arguments. 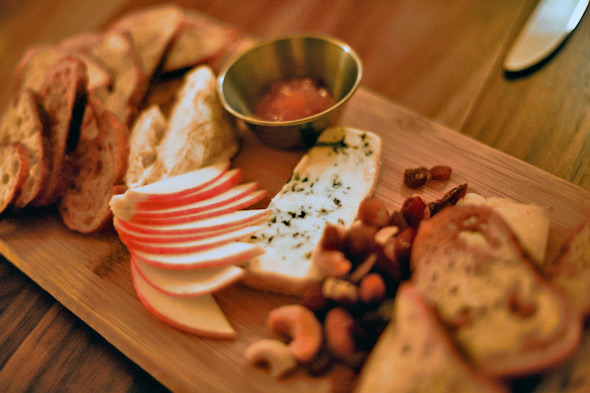 Next, we ordered a cheese line-up which rivaled the dragon competition in the fourth. Harry Potter novel: Swedish Blue; French Brie and Prima Donna ($13). These were bitingly fierce, languorously creamy, and surprisingly reminiscent of raspberry, respectively. They arrived accompanied by crisp baguette, fig jam and a handful of nuts and dried fruit. Perhaps the presence of nuts should be noted in the menu for those with allergies. 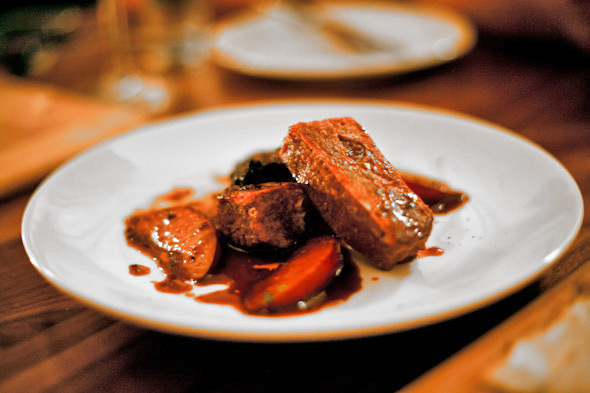 After another tarte, this time: crisp potato and piquant gorgonzola ($10) kissed by wood smoke, our meal transitioned from savory to sweet. Salty burnt-edged foie gras juxtaposed with sweet stewed plums and squashy spiced gingerbread. This sweet/salty tongue confusion was rich and explosively delicious - really, the next best thing since pretzels met chocolate. 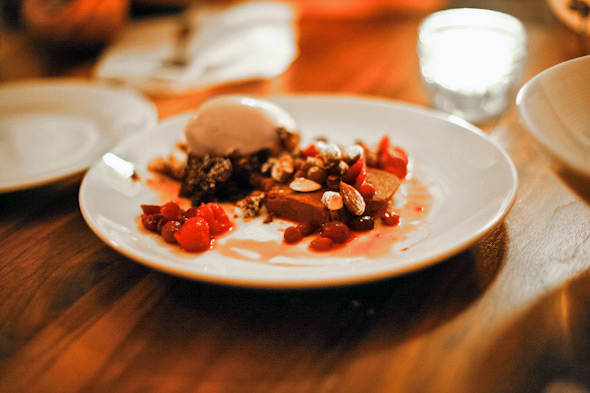 Finally: Not-too-sweet dulce de leche with strawberries and a crunchy shortbread crumble ($7) was an agreeably safe finish, after the brazen and brassy line-up of cheese flavors in our immediate digestive conscious. The combination of chocolate terrine with sour cherries, almonds and salty caramel ice cream ($8) was creative enough, but not as rich and dark as I like my chocolate. The menu also included one tarte flambée option which sounded much like apple pie, flattened. A few adventurous dessert flambées would be a welcome addition for those of us who like a little sweet in our tarte. 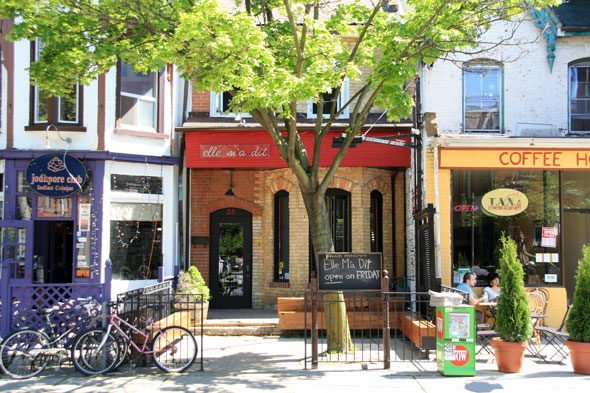 Writing and photos by Sarah Mackinnon