The Ding Dong bun house is a narrow, pleasant Chinatown shop. The walls are lined with tanned and golden buns, reclining under steam-clouded domes, weirdly reminiscent of Brigitte Bardot in a soft-focus lens.

Before we go on, let me be the first to admit that yes, the grubby labels on the display cases look vile. But please do note that they're on the outsides of the cases. The staff here is pretty solid on their hygiene- I saw a customer drop a bun on the floor, and when an employee tossed it in the trash, she used waxed paper to touch it, so she wouldn't get her food-handling gloves dirty. I think you can rest assured that your interior cleanliness is safe here.

So grab a golden tray and a little pair of tongs to browse the shop, piling individual buns and tarts on your tray; the lady at the cash will bag or box them, as you prefer, on your way out. The food is surprisingly inexpensive: I got the six buns on this tray for a trifling $3.80: 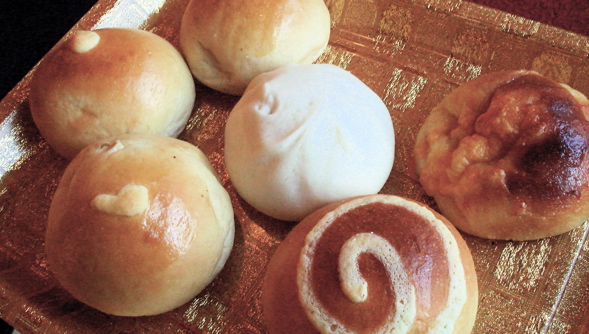 Ding Dong's Chicken Bun ($0.60, the one with the swirl on top), is a light, slightly sweet dough filled with a small amount of chicken and frozen vegetables- not ambrosia, but good enough for a breakfast on the run. The Ham and Cheese Bun (the deeply-bronzed little fellow on the far right, also $0.60) is salty, greasy, and delicious. 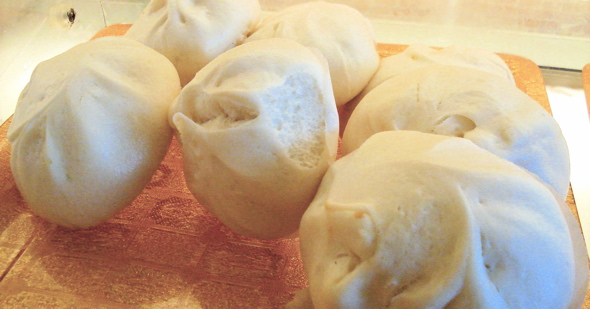 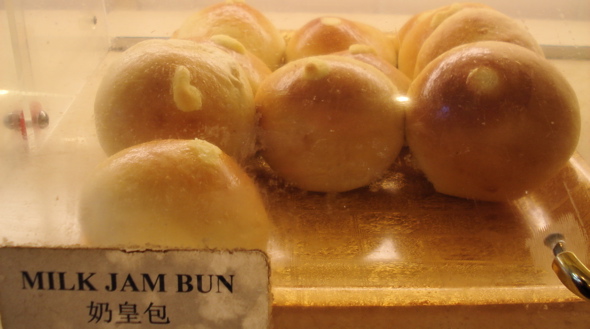 The best bun of all is the evocatively-named Milk Jam Bun, yet another treat priced at a mere $0.60. It's sweet wheat bread filled with a tasty, creamy vanilla custard: Chinatown's version of the Boston Creme donut. As Mike Myers might say, once you try this treat, you'll crave it fortnightly. (Wow, that is a quote from an old movie. Please comment in kind if you get that embarassingly archaic reference; don't leave me hanging here.) 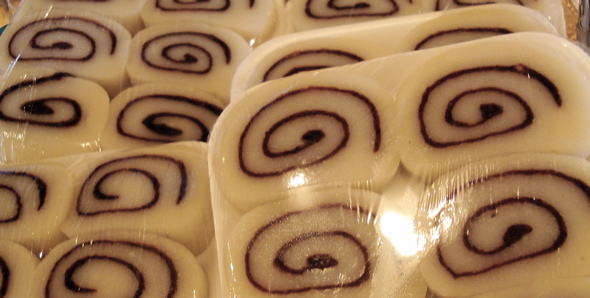 Also on hand are Koh Fan Banana Rolls - smooth, soft, chewy chunks of glutinous rice dough, subtly flavoured with fake banana essence and a thin stripe of red bean paste. They're perhaps a bit of an acquired taste- similar to Korean duk - but there's something about that bubblegummy, chewy, glutinous rice texture that I have dreams about. Seriously. Am I saying too much? Maybe. Anyway, at $2 for 6 chewy bites, you should definitely give these a try.

There's space for a few people to sit and nosh in the small cafe area; but where the Ding Dong really excels is in its ability to stock your fridge with a whole week's worth of quickie breakfasts and snacks for under $5. So don't be a ding dong, eat some Ding Dong. Yeah, I'm done.

The Best Chinese Bakeries in Toronto