Czehoski was once described to me by a friend as "that pricey place down Queen West with the awesome signage." Though this is hardly a thorough or even remotely complete description of the restaurant, it does somehow hit the nail (quite frankly) on the head.

Yes, the signage is "awesome". It is, in fact, the building's original sign from 1924 back when it was a butcher shop and deli owned by a Polish/Czech family. And yes, it is a little "pricey". So every year I make sure to book a reservation during Winterlicious , a lovely little two week period at the beginning of the year where I can actually afford to try places like this. 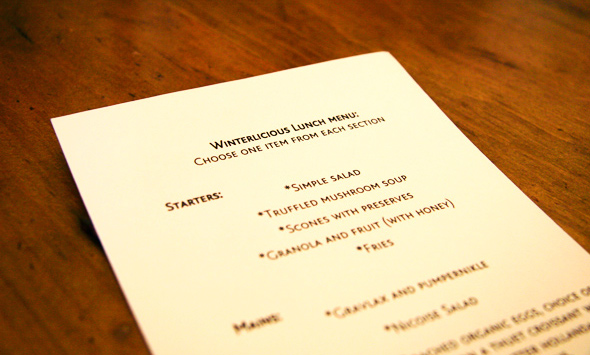 The lunch menu was approached much like a brunch, with a healthy dose of breakfast-style items mixed in to the lineup. A word of warning though for those planning on making a lunch reservation this week; some items are unavailable after 3pm (basically anything that can't be thrown on a grill). Our reservation was for a late lunch at 2:30, and though they failed to warn us of the cutoff originally over the phone, they were kind enough to mention it as we walked in so that we would choose our items quickly and not be disappointed.

Also worth noting is the fact that they could not properly seat us as a party of 6. A couple of us were forced to perch on top of two bar stools. Being a fairly short person, normally I would gladly welcome an upgrade in height, but in this case it just proved to be uncomfortable and kind of ridiculous to tell you the truth. It was like getting stuck sitting on the last resort plastic stepping stool at an overcrowded family Christmas dinner... only you became awkardly tall rather than embarassingly short. 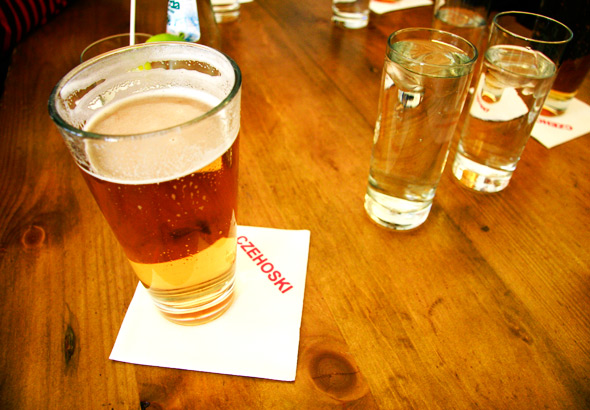 Regardless, I wasn't going to let a few little service shortcomings ruin my lunch. Of course, nothing helps you overcome these weird little situations like $3.50 pints of Labatt 50. I'm forgetting about our height differences already... 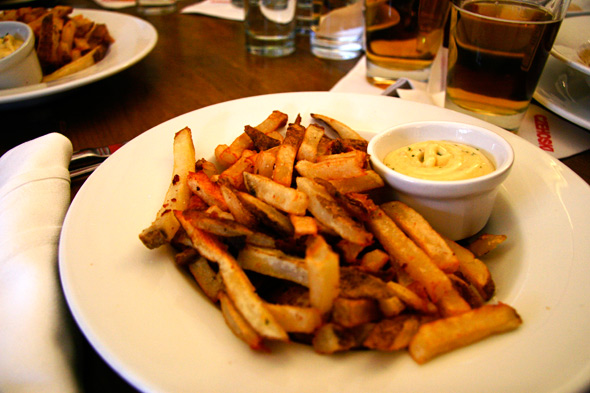 Alright, enough chitchat. Let's get to the food already... here's a perfectly cooked plate of nicely seasoned fries with a side of garlic pepper mayo. Maybe this might seem a little odd to many who might be expecting a little more "upscale" food, but I think there's something actually quite ambitious and even brave about serving a simple plate of fries as an appetizer on a menu like this. It shows a real respect for the simplest of ingredients and cooking methods, and it really puts a lot of pressure on the expectations of the dish. I'm glad to say that this one did not disappoint. 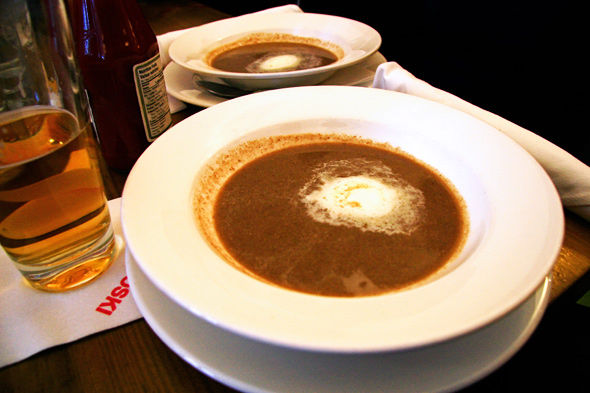 Another equally tasty, though perhaps a little less aesthetically pleasing appetizer, was the Truffled Mushroom Soup. Smooth, hearty, and even meaty, with a nice cool dollop of creme fraiche to finish it off. Maybe the aesthetic criticism is a little off base. What can you really do to dress up a bowl of brown soup? Maybe a splash of fresh greenery for contrast? Or a drizzle of a green chive oil over top? Regardless, a very tasty dish. 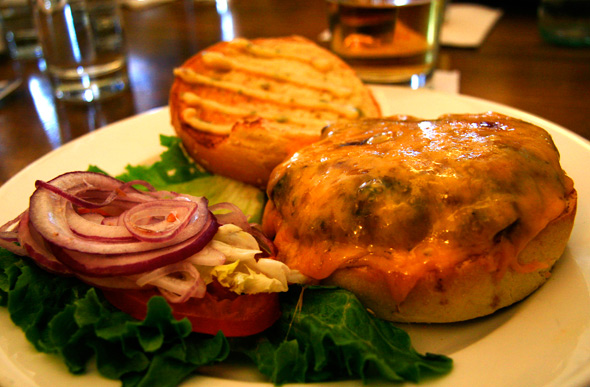 For our mains, it seems that the burger was the most popular choice, and for good reason too. A patty of perfectly seasoned, freshly ground beef covered in melted cheddar, topped simply with lettuce, tomato, and onion, and finished with a drizzle of garlic mayo. My stomach is seriously grumbling just writing about it.

You also have the option of ordering a veggie patty on the burger, which originally didn't sit too well with me. I'm usually not a huge fan of veggie burgers, but after trying Czehoski's version of it, I think I might be all turned around on the issue. I think a large part of what made the veggie patty really tasty was that it wasn't trying to mimick meat. Any chef worth his or her salt knows that this is a battle you simply cannot win. Instead, the burger had a flavour and texture all its own; crispy on the outside and earthy and aromatic on the inside. 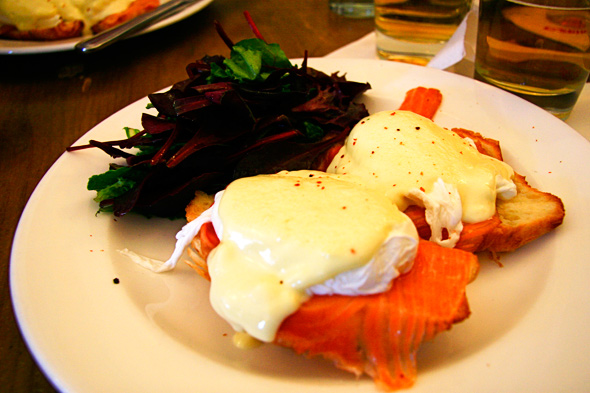 The item that caught my eye on this particular day though was the eggs benedict with smoked salmon. Two properly poached eggs laying on a buttery croissant with thinly sliced smoked salmon inbetween, all covered with subtle and soothing hollandaise sauce. Perhaps I'm biased because eggs benny is my favorite breakfast item of all time, but this dish was simply to die for. Nothing intensely complicated or overpowering. Just fresh and quality ingredients, well prepared, and beautifully served. 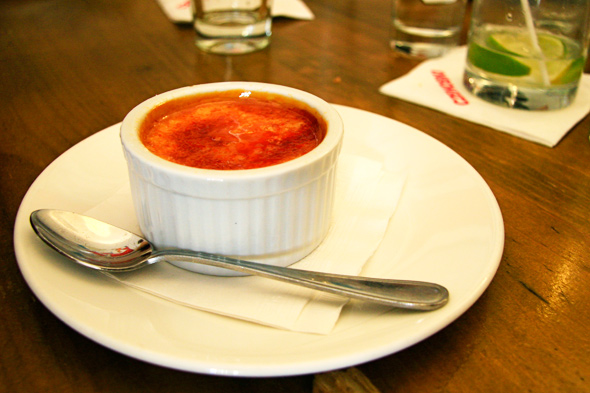 And of course, one cannot leave a Winterlicious meal without dessert. The creme brulee has always been a favorite of mine at Czehoski, and as usual, it was right on the money. 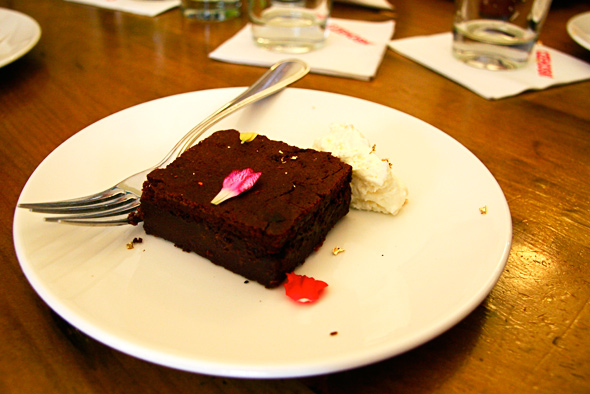 The other dessert option was the Chocolate Ganache, garnished with edible flower peddles. Very much like a really rich brownie, but more crumbly and less gooey. All in all, a delicious ending to an amazingly tasty meal. And because of Winterlicious, the entire lunch was only $20 (not including drinks).

The festival is only on until this Thursday though (February 7th), so if you want to take advantage of the $20 lunch (or the $35 dinner) be sure to book your reservation before then. Oh, and If you're a party of more than 4, maybe double check over the phone that you'll be properly accommodated. Either way, I suppose you can always rely on the $3.50 pints to even things out.